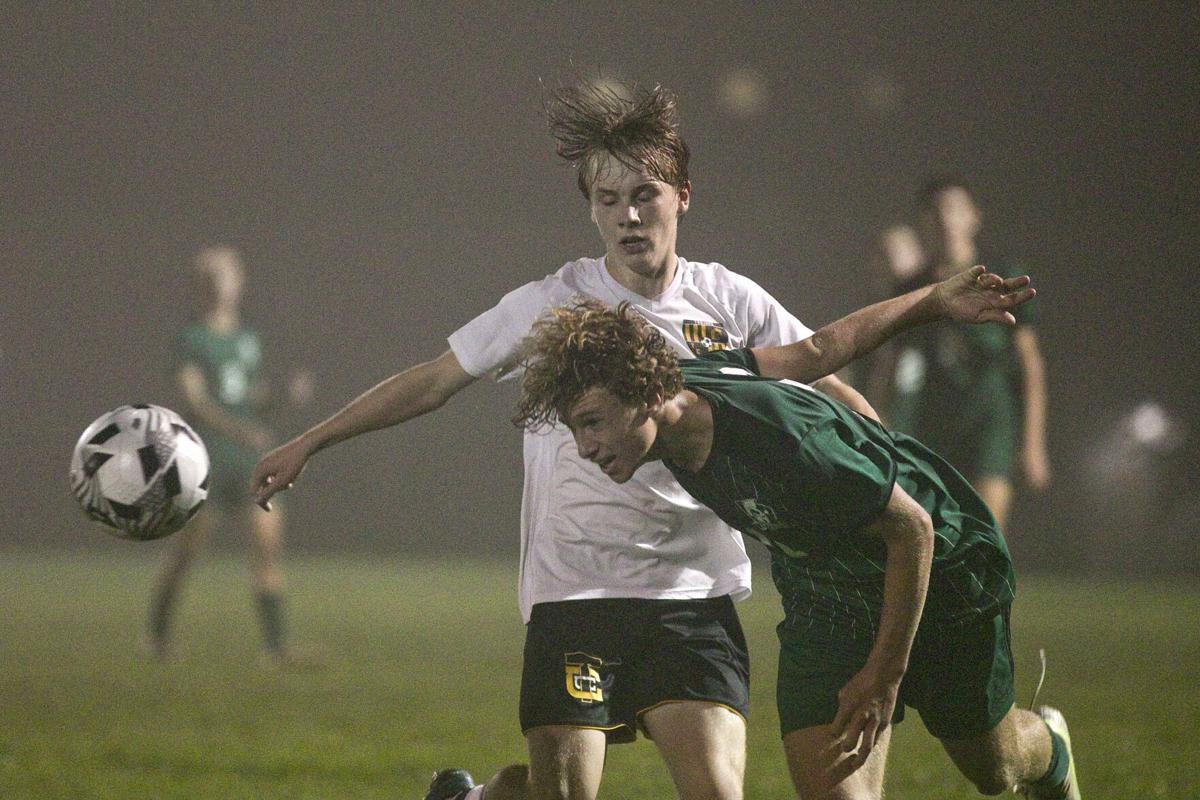 Traverse City West’s Ben Schramski (16) heads the ball away from Traverse City Central’s Declan Feeny (7) in the second half of Tuesday’s game. 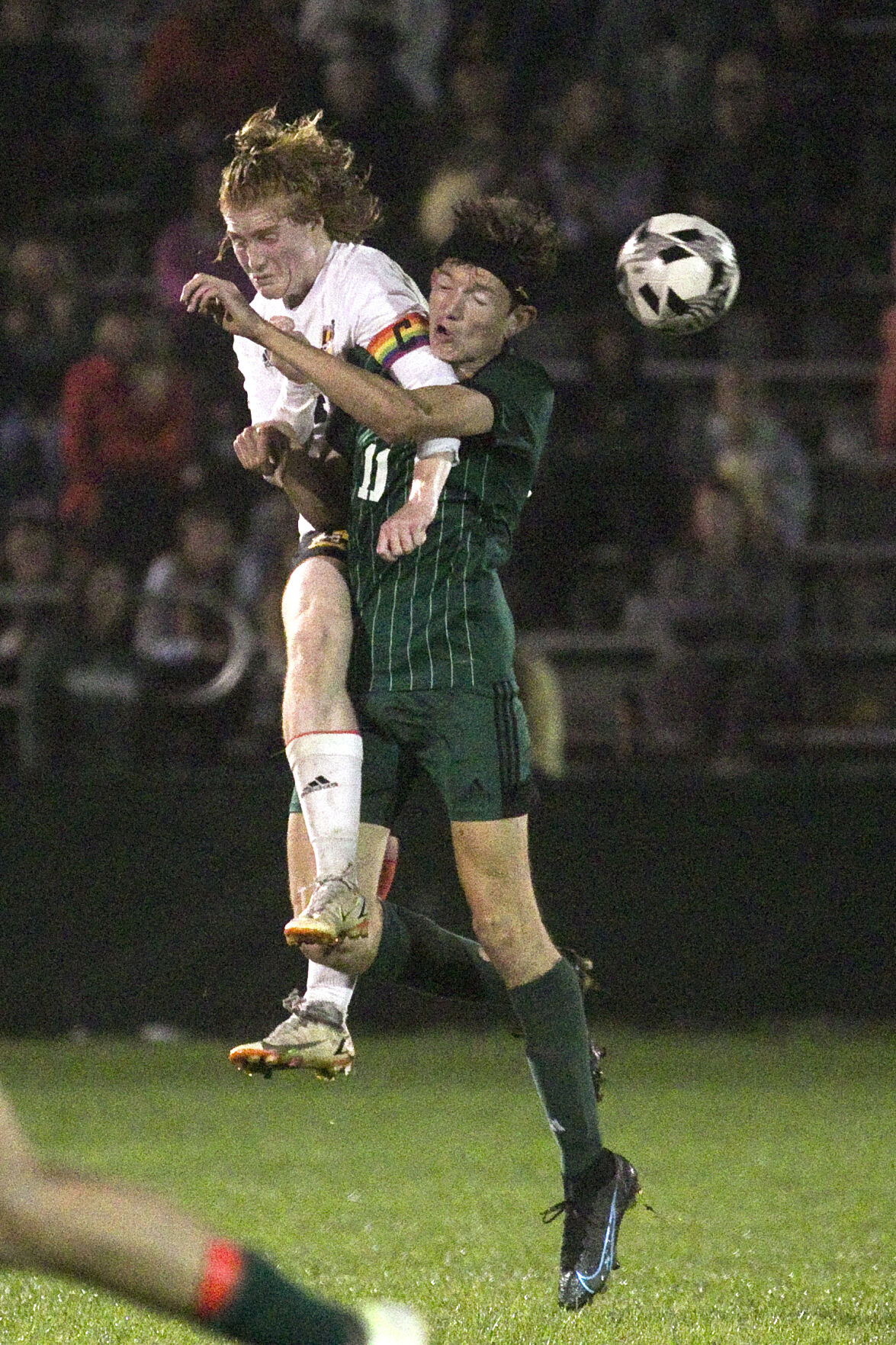 Traverse City Central’s Everest Noyes (4) and Traverse City West’s Josh Hirschenberger (11) leap to head the ball in the second half of Tuesday’s game. 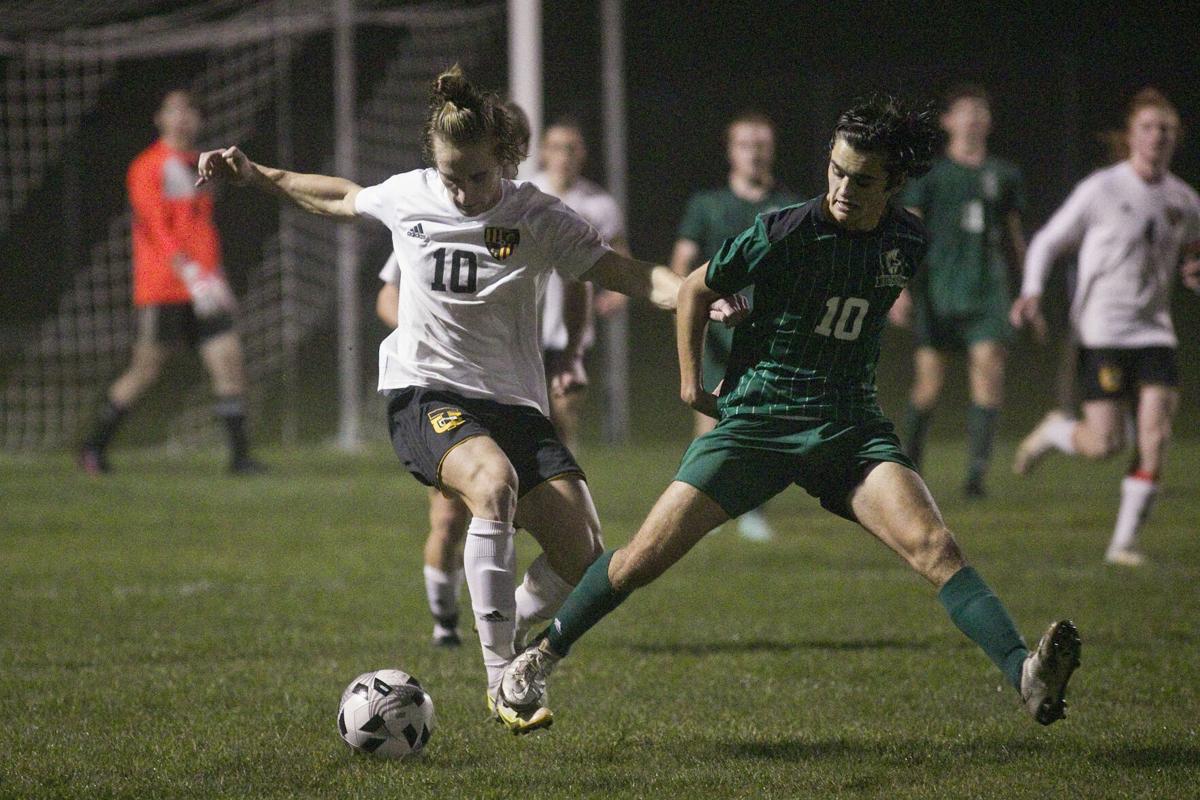 Traverse City Central's Hayden Hansen (10, left) and Traverse City West's Colin Blackport (10) fight over the ball in the second half of Tuesday's game. 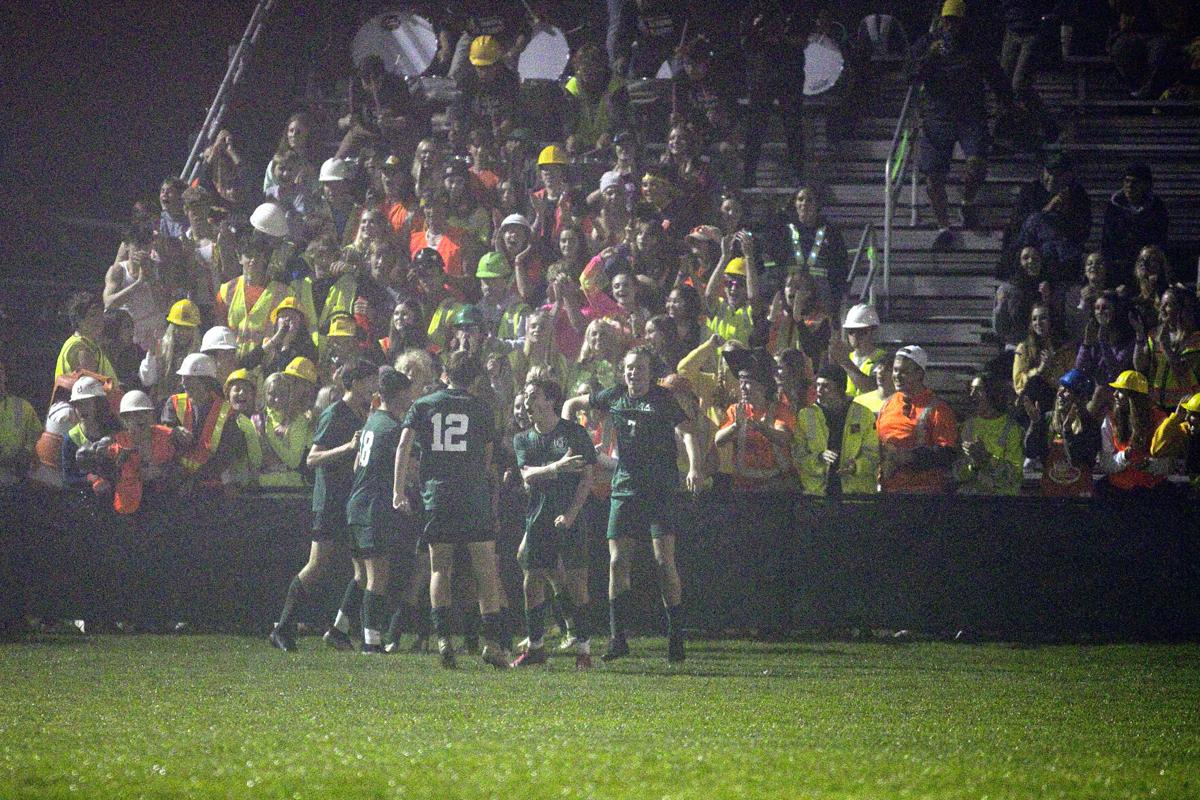 Traverse City West’s Ben Schramski (16) heads the ball away from Traverse City Central’s Declan Feeny (7) in the second half of Tuesday’s game.

Traverse City Central’s Everest Noyes (4) and Traverse City West’s Josh Hirschenberger (11) leap to head the ball in the second half of Tuesday’s game.

Traverse City Central's Hayden Hansen (10, left) and Traverse City West's Colin Blackport (10) fight over the ball in the second half of Tuesday's game.

After all, traditions must be kept.

Griesinger plugged his phone into the public address system and blared 1990s Oasis hit “Wonderwall” Tuesday as his team celebrated its second victory this season over the Trojans.

This one was far from the same, however, as Central shifted game plans entirely from the last matc up, and turned it into the best matchup between the teams in years.

West won the first match 4-1 as Central packed in its defense. The Titans took a game that was much closer than the score would indicate, converting on three set pieces to provide the difference.

“At the end of the last game, we left saying we tested the waters,” first-year Central head coach Chris Hale said. “They have just what we have. They’ve got skill; we’ve got skill. They’ve got speed; we’ve got speed. We don’t need to park our bus. We’re going to go after them. I’m disappointed because I think we were the better team tonight, which is a great feeling, but it doesn’t matter.”

TC West goaltender Trae Collins barely had to make a save in the last meeting, but the Trojans kept the junior netminder busy this time around.

“I had to stay on my toes a lot more,” Collins said. “Just stay more focused. They attacked and combined a lot better as a team.”

The 2-1 win gives West (11-4-2, 8-0 Big North Conference) at least a share of the Big North title for the 20th time since the school opened in 1997. The Titans have two more games left to clinch it outright, with just a tie in either locking that up. West hosts Gaylord for a Thursday league game, then travels Monday to Alpena.

Petoskey (13-3-2, 6-2 BNC) topped Cadillac 8-3 Tuesday night to stay within two games of West in the standings. Petoskey has tough games against TC Central and Gaylord remaining.

“I guarantee this crew of guys is looking forward to one more crack at them,” Hale said. “We were so close. ... I can’t imagine that they’re over there thinking they kicked our (butt). They didn’t. This was a great soccer game.”

West’s Caleb Nowak scored in the fifth minute, firing at the left post.

Just 46 seconds later, Central answered with a Quinn Noyes goal, with Hayden Hansen playing the ball down the right wing and then playing it back in for the Noyes finish.

“We didn’t do a particularly great job of taking the emotion out of the game, which is our number one priority every time we play Central,” Griesinger said. “And you felt it. So a goal in the fifth minute and then a goal in the sixth minute, because we couldn’t seem to pay attention off of a set piece.”

The teams battled back and forth, trading scoring opportunities. As temperatures lowered toward the end of the first half, waves of fog enveloped the field.

West finally broke through with a Colin Blackport goal with 5:02 remaining, converting a back pass from Connor Davis off a corner kick set piece.

“That felt good,” Blackport said. “We do those practice a lot, and it’s good to see one kind of come to life. We’ve been talked about it a lot. We’ve never really had one this year, but that one was pretty sick, really happy with that.”

The play is designed for one player to take the ball out of the air and settle it down, leaving it for another to take the shot with momentum. Blackport finished to the right post, just past a diving Colton Warren, who kept the Trojans right in it with several big saves.

“They didn’t sit back as much, that’s for sure,” Blackport said. “I don’t know what happened. For us, it was a really off game. We ended up sitting back a lot for some reason.”

West won nine of its last 11, with losses to both Midland teams the only hiccups in that span. Opening districts against Midland (13-2-2) next Wednesday at home gives the Titans an opportunity to erase on of those mistakes.

“Kind of the same thing as here,” Blackport said of the Midland loss Sept. 25. “Some games we just aren’t turned on and ready to go. I don’t know what it is. I’m trying to figure out myself. I know coach is trying to figure it out.”