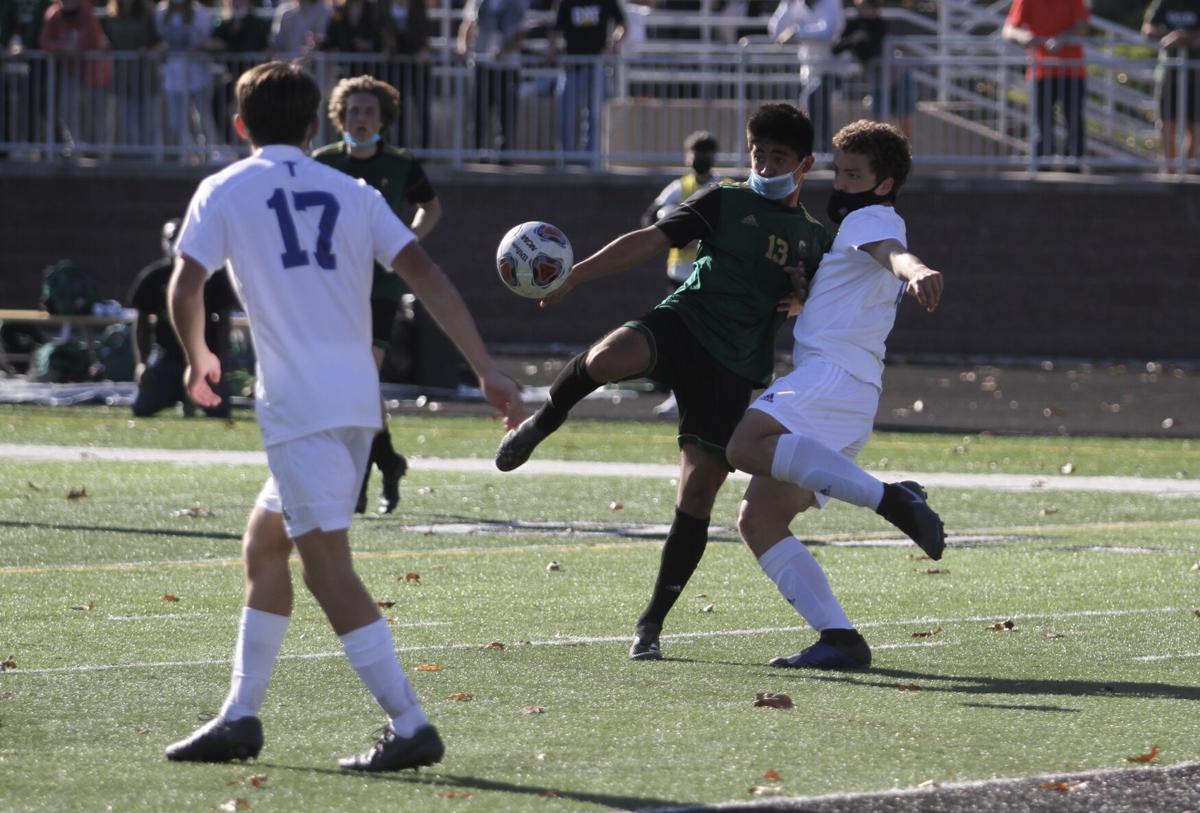 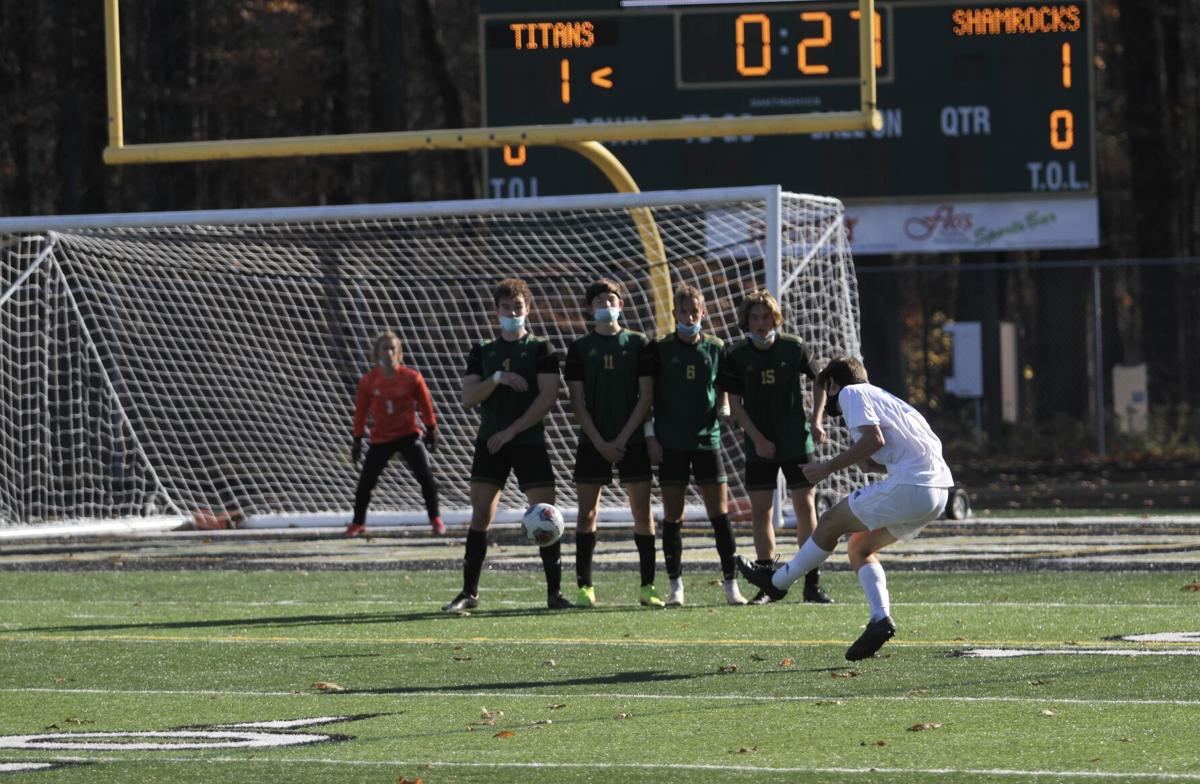 Finn Durbin (4), Josh Hirschenbeger (11), Gavin Michael (6) and Cooper Davis (16) line up to block a set piece from a Detroit CC player during the Division 1 state finals Saturday in Comstock Park. 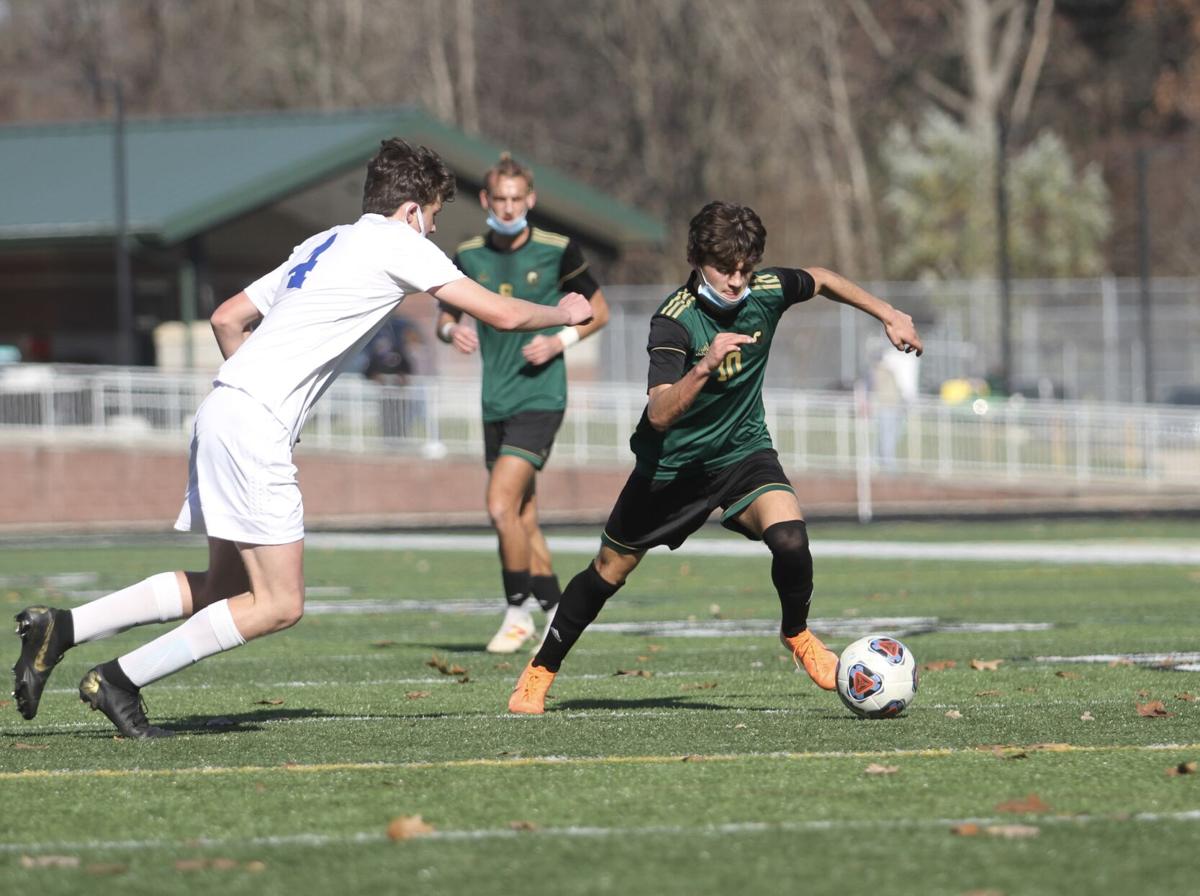 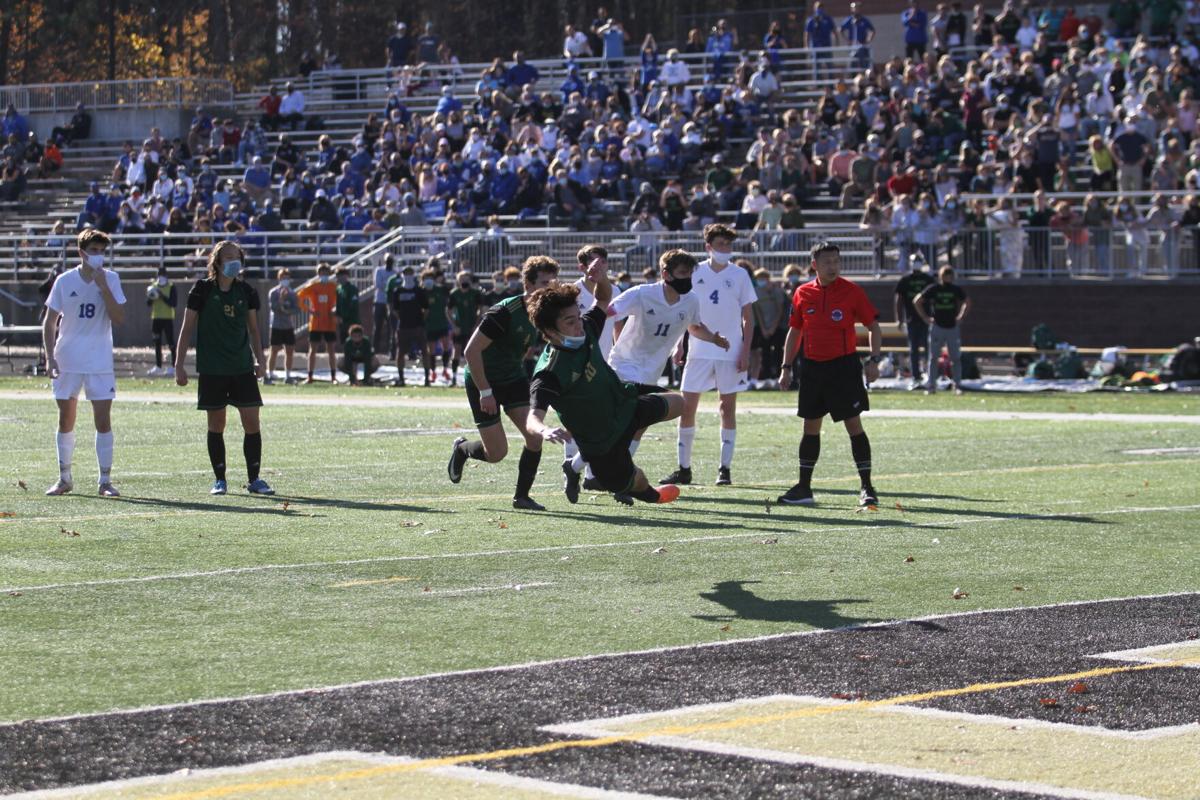 Traverse City West senior Colin Blackport flies through the air after shooting a penalty kick for a goal in the second half of the Division 1 state finals Saturday in Comstock Park. 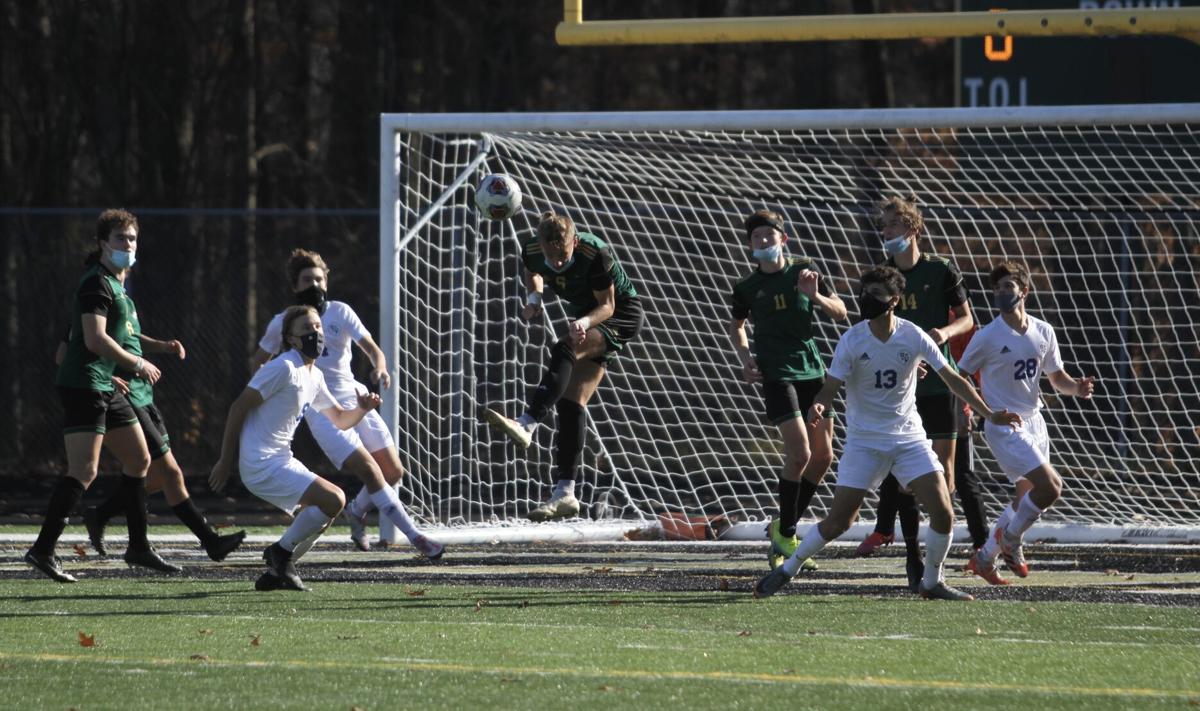 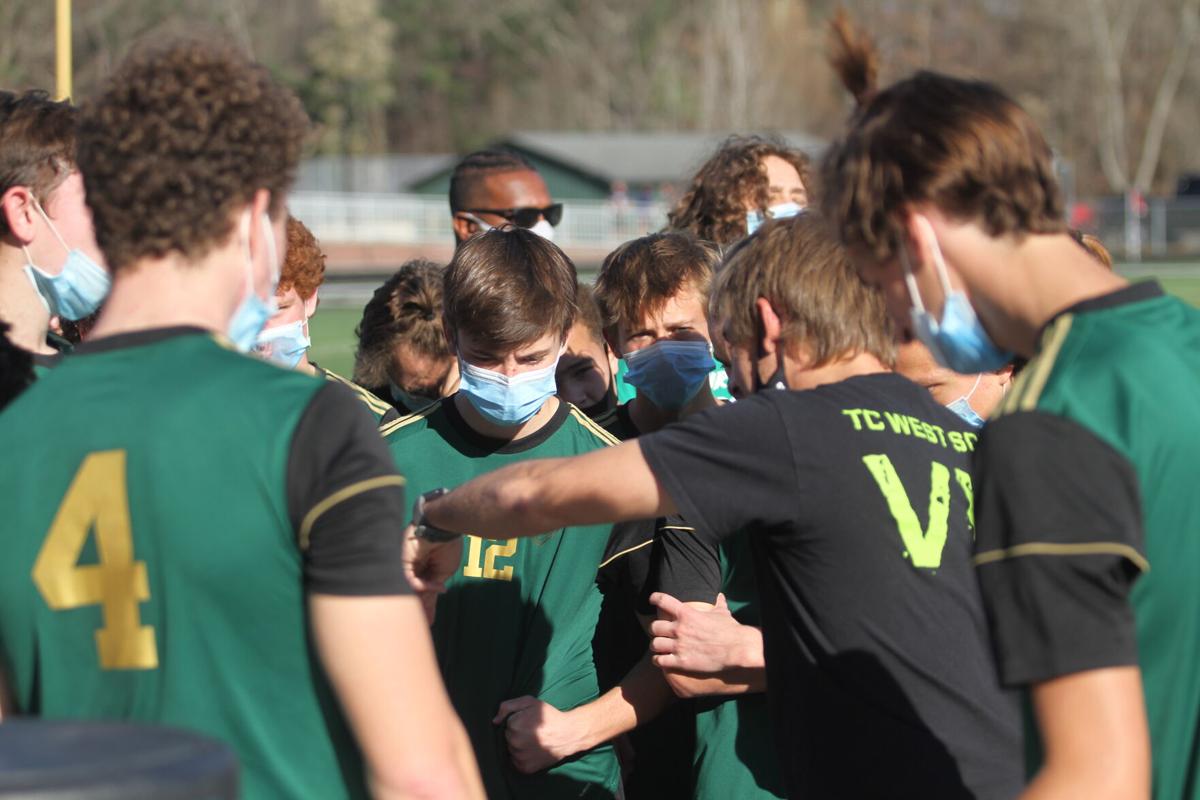 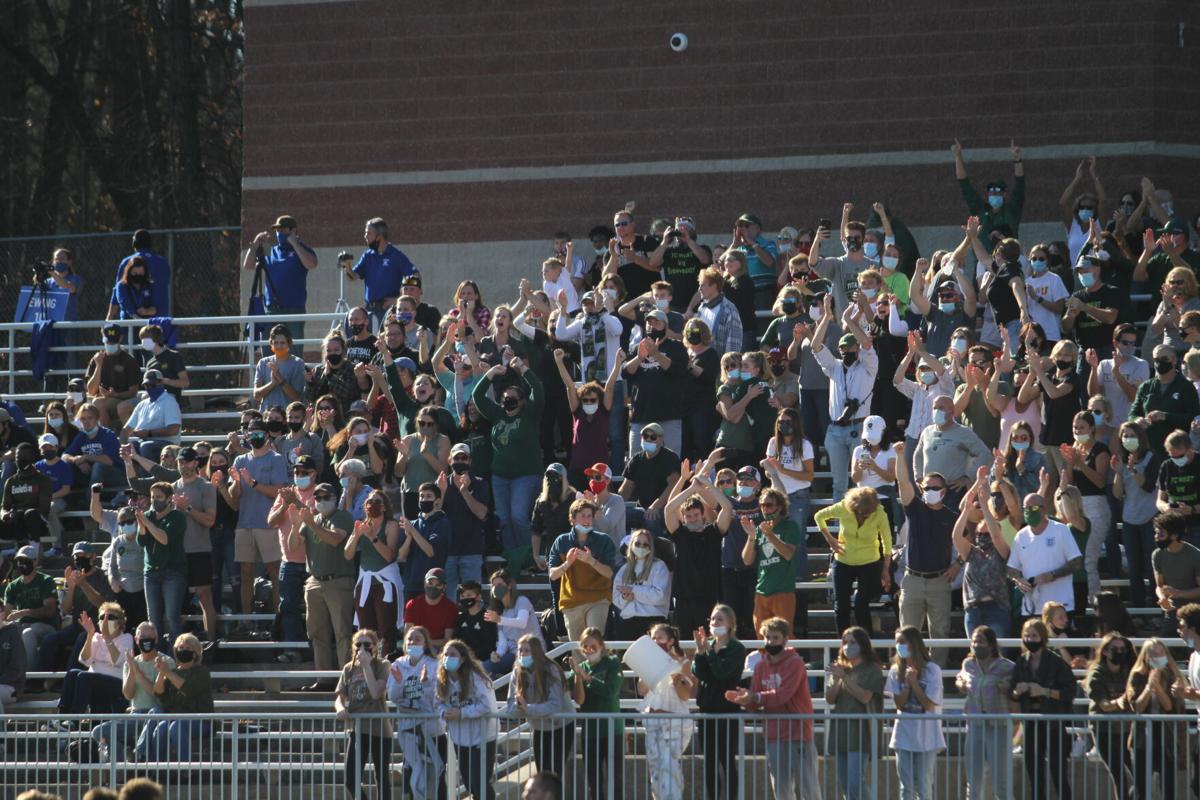 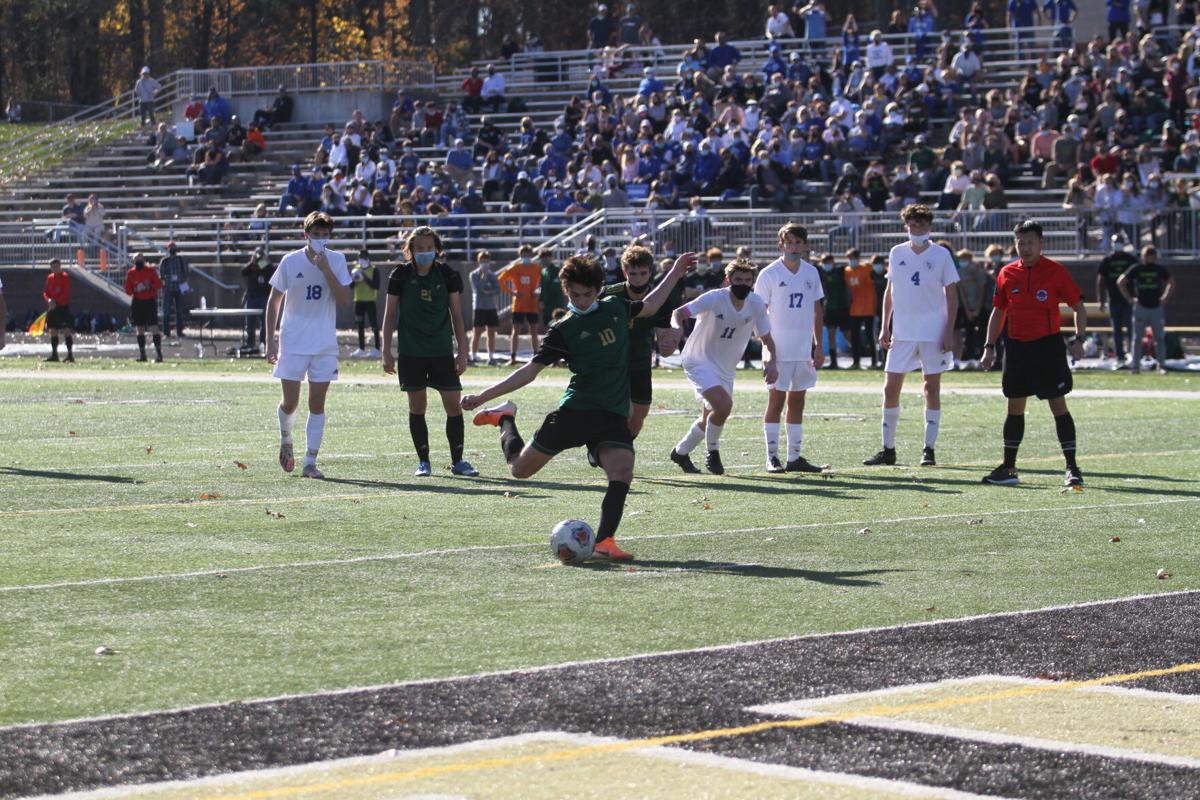 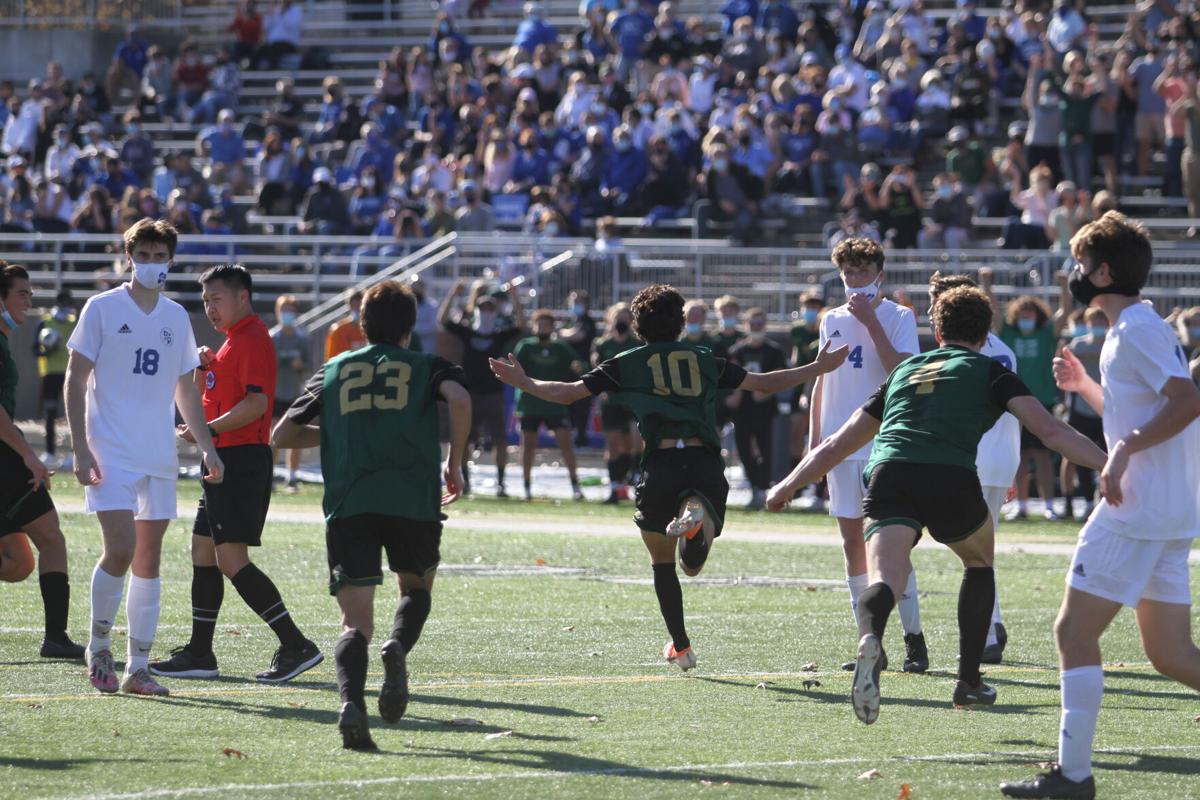 Traverse City West junior Colin Blackport (10) runs toward his bench in celebration after tying the game in regulation on a penalty kick. 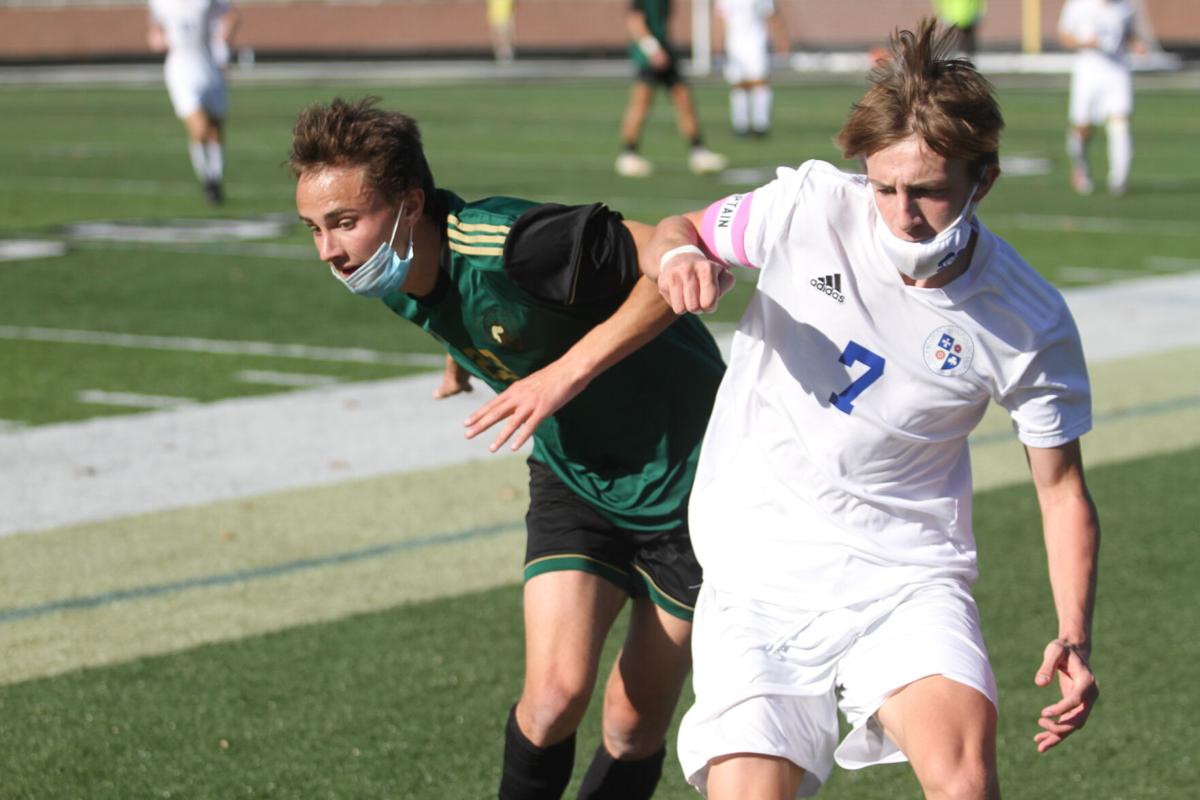 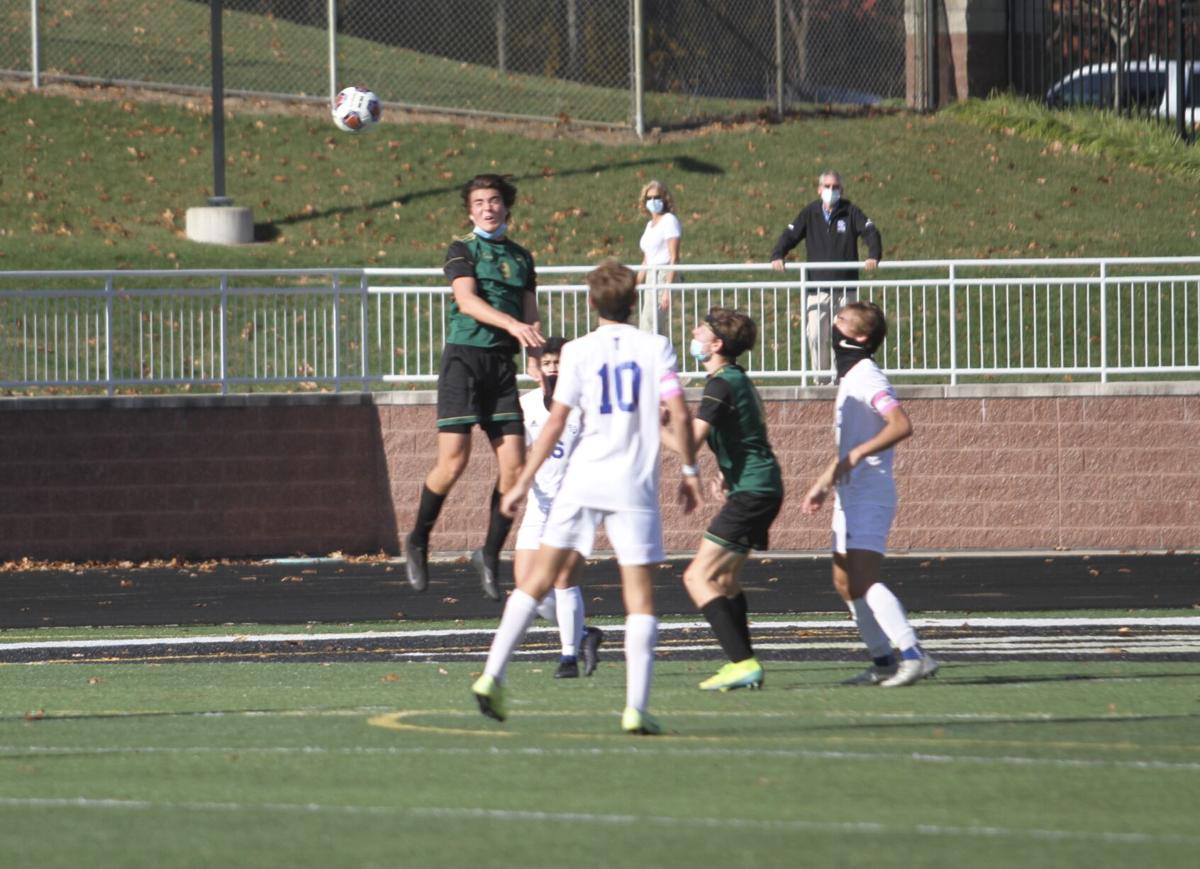 TC West’s James Vandermolen heads the ball away on defense during the first half of the Division 1 state finals Saturday in Comstock Park. 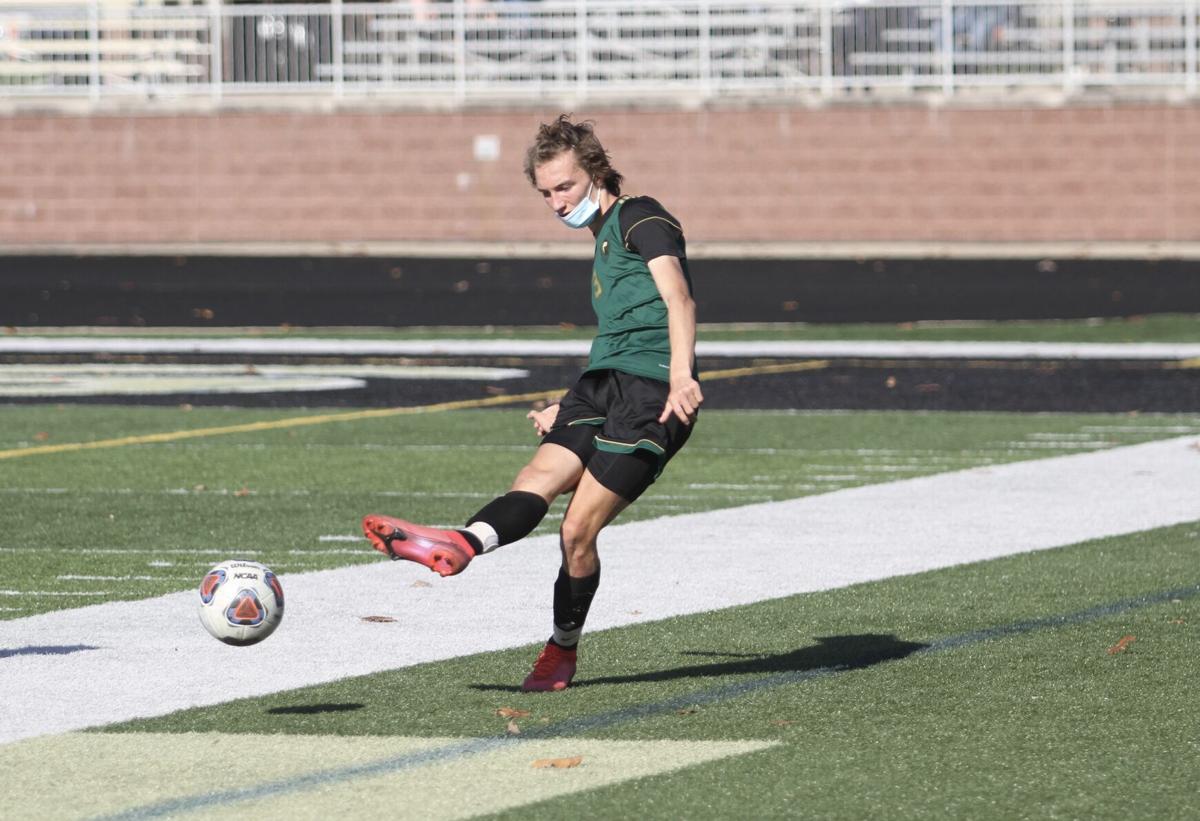 Finn Durbin (4), Josh Hirschenbeger (11), Gavin Michael (6) and Cooper Davis (16) line up to block a set piece from a Detroit CC player during the Division 1 state finals Saturday in Comstock Park.

Traverse City West senior Colin Blackport flies through the air after shooting a penalty kick for a goal in the second half of the Division 1 state finals Saturday in Comstock Park.

Traverse City West junior Colin Blackport (10) runs toward his bench in celebration after tying the game in regulation on a penalty kick.

TC West’s James Vandermolen heads the ball away on defense during the first half of the Division 1 state finals Saturday in Comstock Park.

TC West may have come back north with the runner-up trophy in tow for the second year in a row but they also came back with a sense they accomplished something more.

“Give us some time and we will look back at it in a positive light,” Titans head coach Matt Griesinger said. “Right now it is super hard to find much positive but these guys are proud of what they did. I know they’re sad to see the runner-up trophy again but I know deep down they are proud and will remember this journey 10 years from now.”

Hindsight is always clearer once time has passed, and Durbin said he remembers the negative emotions surrounding last year’s 4-1 overtime loss to Athens didn’t take long to disappear. The Titans know they have created a new direction for the program.

“It’ll be a bit tougher this year because it was our second go at it. It was really special. What we did is not very common.“

TC West is the first D1 school to appear in back-to-back title games since East Kentwood in 2007 and 2008. The Titans also set a school record for wins in a season with 22 and the regional title win over Mona Shores marked Griesinger’s 100th career win in only six seasons.

“I think this sets the program up greatly for the next couple of years and years past that when we are way gone,” Durbin said. “Coach G’s got his 100th win in only six years, which is a great start to a program, and he’s built something here that is really special.”

The Shamrocks controlled play in the opening half and consistently kept balls at midfield with their backline defensive work. The Titans didn’t fire a ball at the net until more than 12 minutes into the contest while the Shamrocks had little luck of getting any offensive chances themselves.

The Shamrocks wouldn’t break the tie until 8 minutes into the second half when an accidental handball in the Titans box set Jack Lueker up for a penalty kick. Titans senior goaltender Blade Kalbfleisch had to make a couple of big saves down 1-0 to keep the Titans in the game until they got a break.

With only 6:34 remaining, Titans junior Colin Blackport was fouled in the box and the Shamrocks were given a yellow card.

That meant Blackport would earn a penalty kick to tie the game, and with it he released a laser to the back of the net to send the game to overtime.

The only goal in overtime came on a questionable foul in the box that was called with only 21 seconds left in the first overtime period. Lueker lined up and drained it again to put the Shamrocks up for good.

“It says a lot about the quality of play and the fact that the three goals were scored by penalty kicks,” Griesinger said. “I thought we had our chances and they had their chances but you don’t come into a state final expecting to play the greatest soccer you’ve ever played.”

Griesinger said his team got too emotional at times but with the pressure of the state finals, that is expected. The Titans mustered only seven shots and six corner kicks in 100 minutes of play which was a reflection on the Shamrocks defense according to DCC head coach Gene Pulice.

“I think we have one of the most organized defensive groups in a long time,” Pulice said. “Even when things get chaotic they seem to get it organized and don’t give up many goals.”

The Shamrocks allowed 13 goals in 15 games and shutout six opponents in a coronavirus shortened season. The Titans had the luxury of starting their 2020 season a few weeks earlier.

The Titans will lose 12 seniors from this year’s team, most of which were a part of the varsity squad as sophomores. TC West’s junior varsity team outscored opponents 105-5 this season and while Griesinger knows it won’t be the same, he is hopeful the underclassmen want to be like this year’s senior class.

“We lose 12 seniors and they are a meaningful group,” Griesinger said. “They bought into the program and they’ve been starting since they were sophomores. The kind of experience they bring is something that’s going to be really hard for us to follow up.”

The title game appearance was the third in school history for the Titans — they beat Livonia Stevenson in 2006.

“The program that started in 1996 was a heck of a program and it’s maintained,” Griesinger said. “It’s our third state championship since 2006 so it lets the younger guys and northern Michigan know that we’re serious about the soccer that we play.”

KINGSLEY — An unnamed person on the coaching staff for the Kingsley High School football team has tested positive for COVID-19.