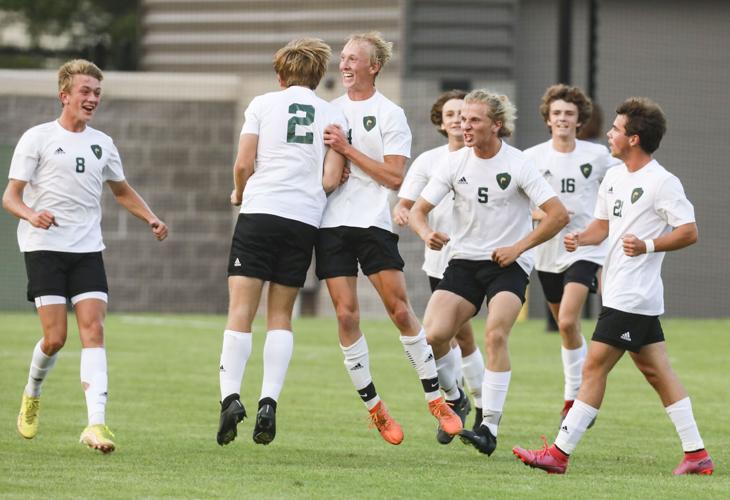 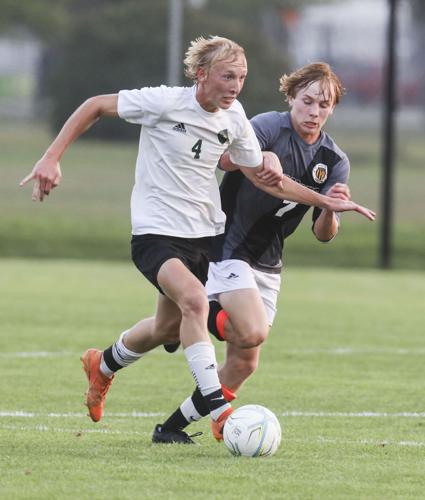 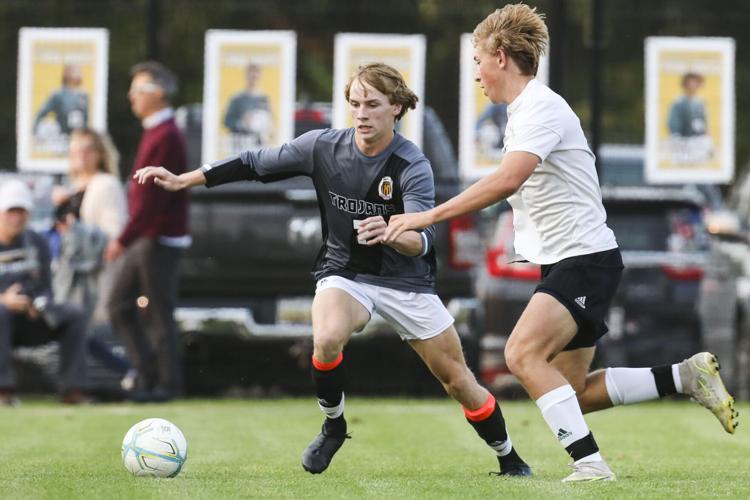 Traverse City Central’s Declan Feeney and Traverse City West’s Luke Wiersma in action at the in TC on Thursday. 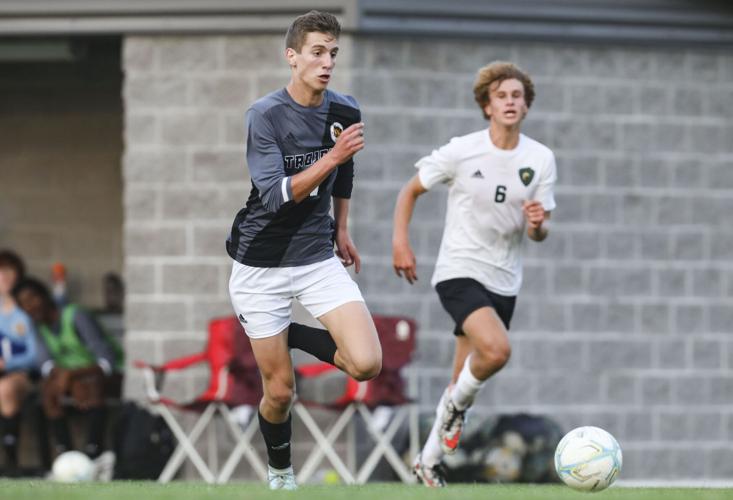 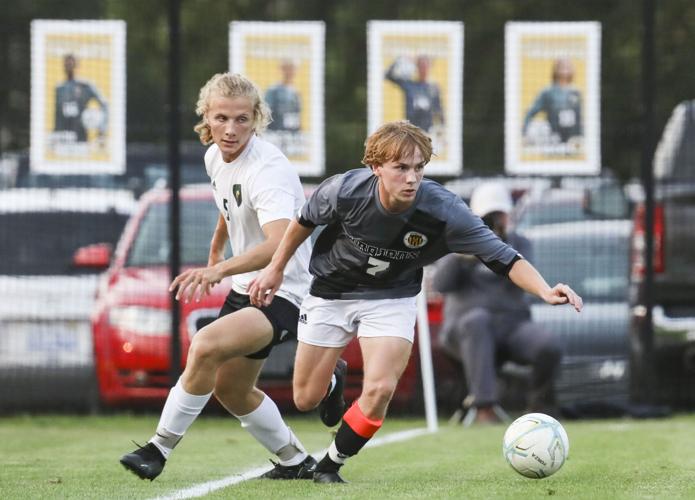 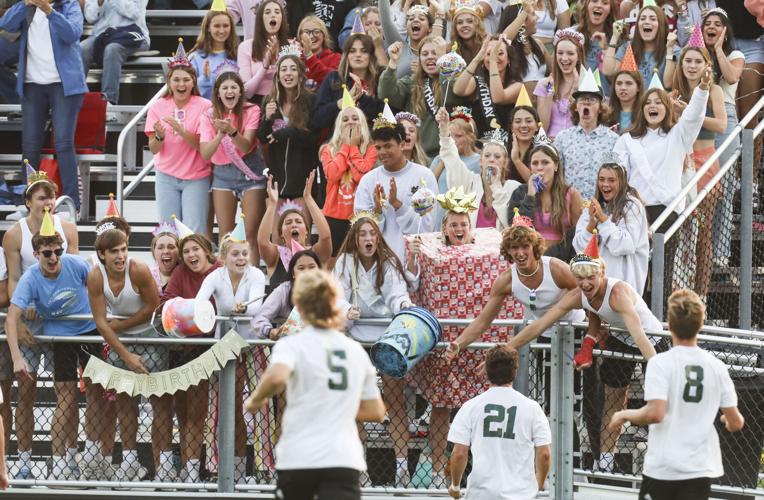 Traverse City Central’s Declan Feeney and Traverse City West’s Luke Wiersma in action at the in TC on Thursday.

TRAVERSE CITY — The rivalry may have just become even more heated, if that’s somehow possible.

After a 7-0 Traverse City West win over Traverse City Central, the coaches exchanged words following the handshake line at Thursday’s varsity boys soccer game at the Trojan Athletic Complex. Trojans head coach Chris Hale declined comment, other than to say he felt the game was “classless.”

The 7-0 outcome is the rivalry’s largest margin of victory in at least a decade and the most goals scored by one team in the series since a 7-2 West win Sept. 15, 2016.

The shutout victory maked the Titans’ 13th straight win in the rivalry, with Central’s last win coming in an Oct. 19, 2017, district contest. West outscored Central 46-6 in that 13-game span.

“There was a lot of back and forth,” West head coach Matt Griesinger said. “Our back line plus (goaltender) Trae (Collins) was super interested in a shutout. That was the goal coming in. I thought we played well and recognized particular moments and took advantage of seven of them.”

Titans senior captain Ian Robertson scored two goals and assisted on three others, and two of the back-line defenders who produced the shutout also netted goals.

Robertson said he didn’t know how many goals or points he’s amassed this season, but one number stands out.

“That’s eight wins,” Robertson said. “That’s a good thing. That’s what we like.”

Aidan Orth put West on the board in the 18th minute, cutting up the left side and firing a shot just under the crossbar.

Titans junior defender Dougie Rice scored his first goal of the season off a long free kick from just inside midfield, equaling his total from last year.

“It was so much better just because it was in this game,” Rice said. “High intensity, the crowd is always going crazy. To score that second goal felt amazing, especially a minute after we scored the first.”

Thirty-seven seconds, to be exact.

The West student section chanted Rice’s name in the second half, but not before singing “Happy Birthday” to junior Nolan Collins.

Robertson connected on his first goal of the day, assisted by Rice, for a 3-0 lead with 18:47 left before halftime and the Titans took a three-goal lead into halftime.

Robertson added a penalty kick goal 2:08 into the second half.

Central’s Quinn Noyes traveled back in time in a way, drawing a yellow card and leaving the game with 18:48 remaining. Referees soon after added two minutes back on the clock, and Noyes re-entered the game at the next stoppage with 20:16 left.

West poured on three goals in the final 13 minutes, started by a Jackson Cote goal set up by Robertson, then a laser from Nic Church into the top far post corner with 11:03 remaining and defender Ben Schramski’s goal off a Robertson assist on a corner kick play with 4:52 left. The Titans held a 14-1 advantage in shots on goals and 11-0 in corner kicks.

Robertson almost had another midway through the second half, but Trojans center back Koen Burkholder cleared off his shot at the line that was already behind Central goalie Caleb Byland, the only freshman on varsity on either team. Byland finished with seven saves to one for West’s Trae Collins.

“I haven’t scored very many good goals this year, but a bunch of little cleanup ones,” Robertson said. “That’s just everybody else around me working their butts off.”

The shutout was West’s sixth of the season, including three in a row for the Titan back line of Henrik Buttleman, Rice, Schramski and Jacob Hagerman, with Kallen Ray subbing in. Luke Wiersma played the defensive midfield spot, roaming the width of the field in front of the defense.

“It was amazing, especially to be our sixth,” Rice said. “It’s really nice to shut out a team that if they got a goal, it would have felt like a different game for sure.”

Central scored in all three games against the Titans last season, but West won all three by a combined 10-4 margin.

The Titans host Gaylord on Tuesday, while Central hosts Midland and Traverse City Christian on Saturday.

Break out your best British accent for episode 225 of the Get Around, bruv!

The Get Around Episode 223 — Boyne City's Alex Calcaterra & Jack Neer

Hey, how about that? The Get Around is back once again, bringing our fine audible viewers ep…

The Get Around Episode 222 — Fall Sports Preview