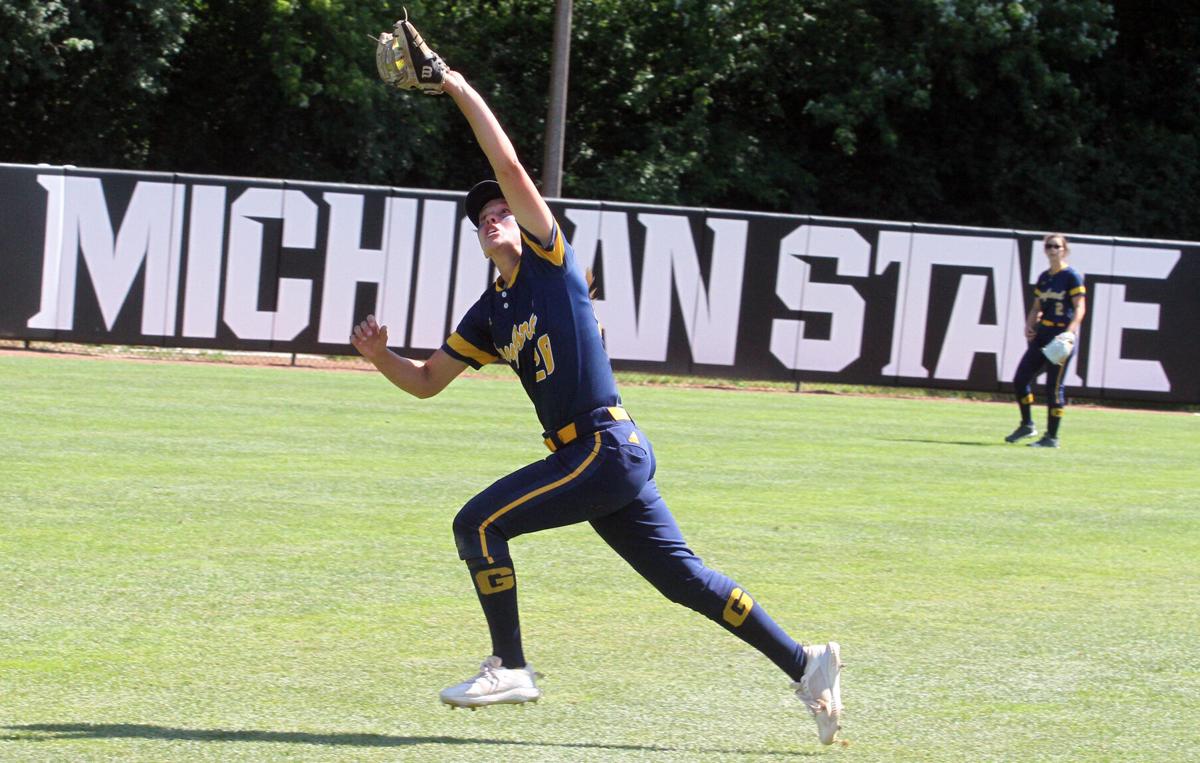 Gaylord shortstop Jayden Jones (20) stretches to make a catch Thursday in the Division 2 state semifinals at Michigan State. Jones turned a double play with a throw to first. 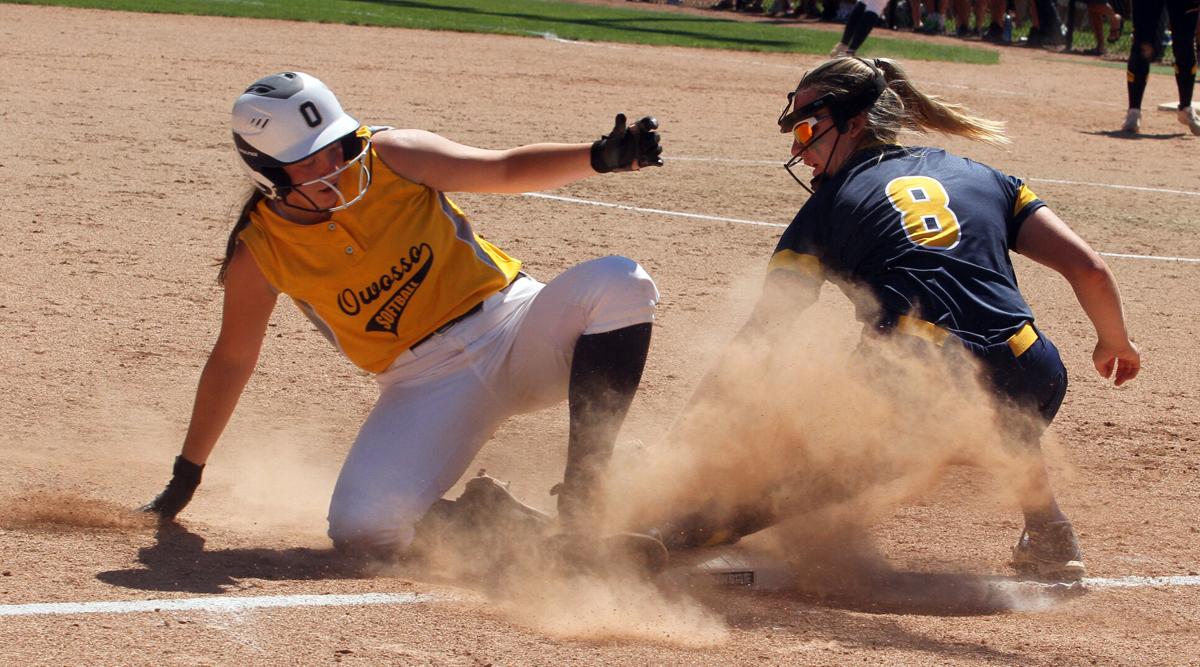 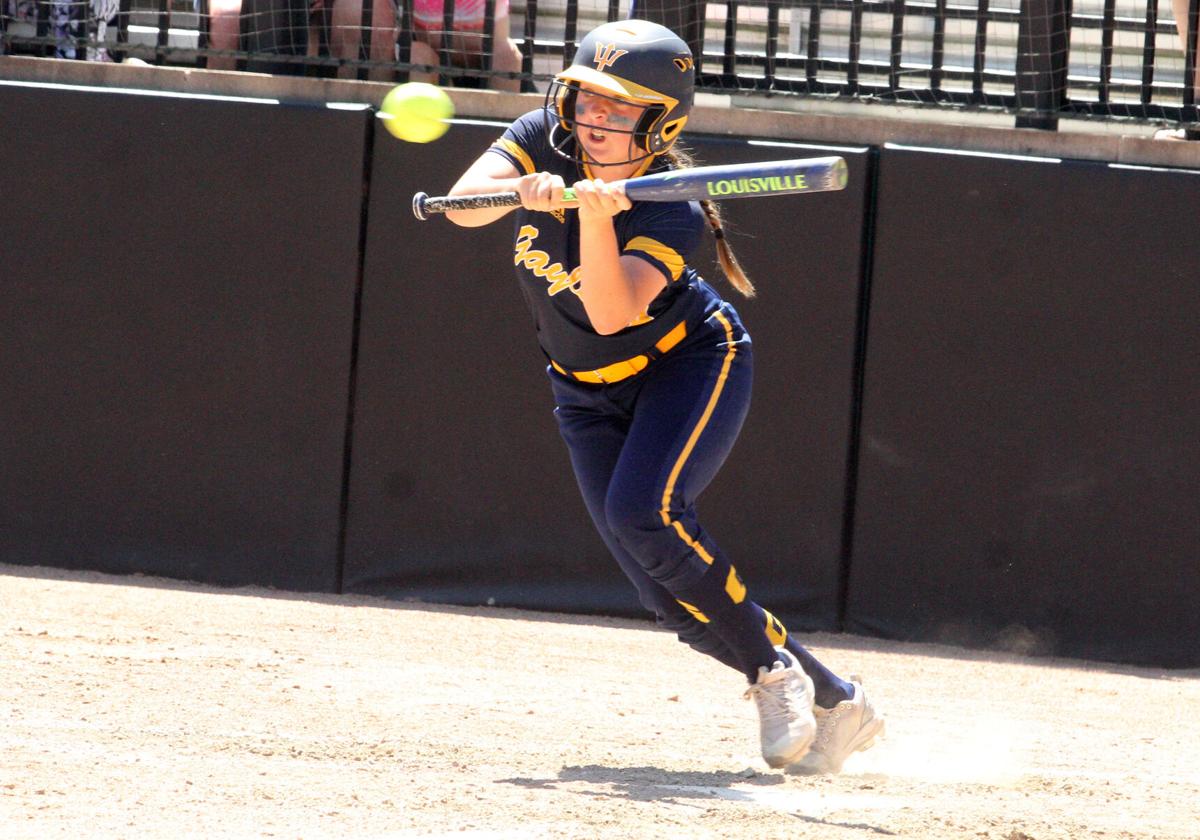 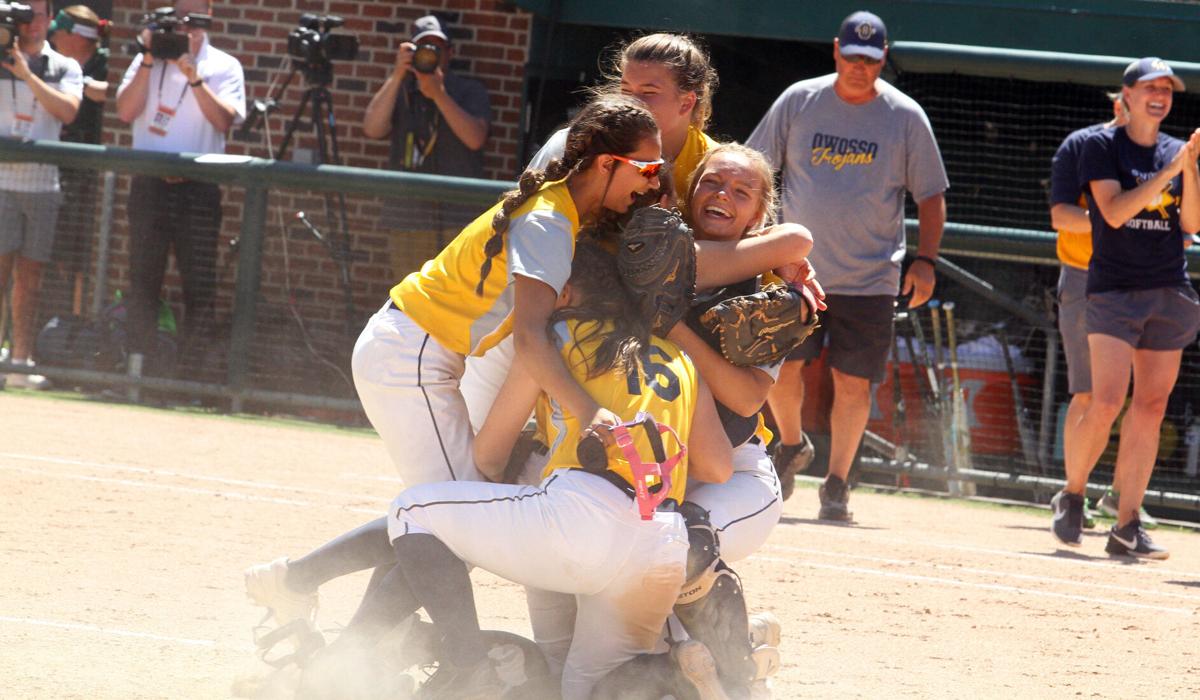 Gaylord shortstop Jayden Jones (20) stretches to make a catch Thursday in the Division 2 state semifinals at Michigan State. Jones turned a double play with a throw to first.

And for good reason.

Gaylord made its first trip to the Final Four since 1991. Here's 33 photos from the Blue Devils' experience.https://t.co/qprn0Lp9F3 pic.twitter.com/j80vmuW6ai

The Blue Devils made the school’s first trip to the semifinals since 1991 and did it with six freshmen, two sophomores and a junior in their starting lineup.

“I told them it’s not over; we will be back,” Cruz said. “These girls are good, their heart and their minds are in it all the time. They are young but they want to win and they will win. We will be back.”

Gaylord has plenty of time to make more runs at a Division 3 title with the entire starting lineup, plus the pitching rotation of Avery Parker, Jayden Jones and Abby Radulski, returning for at least the next two seasons.

The young team, which featured only three seniors seeing limited playing time, wasted no time making its mark in Division 3 and knows it will be a force to be reckoned with for the foreseeable future.

“I think it’s given us a huge confidence boost that we can do it, and we’re just as good as anybody else,” Gaylord freshman Jayden Jones said. “It’s the little things we do right, so we have just as good a chance as anyone to win.

“This loss is definitely going to motivate us to do better, and be more prepared next year.”

Owosso (36-3) relied on the experience of its Kent State-bound pitcher Macy Irelan and her blazing fastball to keep the high-powered Gaylord offense at bay for most of the day.

Irelan managed eight strikeouts while allowing only three hits, all singles, against the young Blue Devils line up. Trojans head coach JoEllen Smith said she made it a point to her team to play with confidence and use their experience against such a youth-filled team.

“The big thing is our school is known for giving up and these girls switched that around,” Smith said. “Coming into regionals they just said, ‘No, we’re not just going to lose.’ Our seniors don’t want to go home. It’s huge for our community and huge for our school to teach this about ourselves.”

The Trojans have several freshmen of their own but it was the juniors and seniors who did a lot of the heavy lifting to push them to the D3 title game against Marysville (31-6), who beat Chelsea 7-1 in the other semifinal.

The Blue Devils were unable to get much offense going as Irelan’s speed “surprised” Gaylord batters early on, according to Cruz. Jones said she felt her team doubted themselves in the early stages, but found confidence in the late innings. Irelan carried a no-hitter into the fifth inning before Addison Wangler reached base on a bunt single.

“It seems like we were playing a little timid and we weren’t going up there to hit the ball hard,” Jones said. “I think we finally gained a little bit of confidence at the end and I just wish we were able to do that from the beginning.”

The Trojans got both of their runs in the second inning when they opened the frame with back-to-back singles. A wild pitch allowed the first run to score after a sacrifice bunt moved the runners into scoring position, and Sydney Somers capitalized in the next at-bat to send in the only RBI of the game to make it 2-0.

Parker settled in after the Trojans manufactured those runs and kept Owosso scoreless from there until Jones took in the circle in relief in the sixth.

Gaylord had its best chance to take the win in the final inning thanks to a pinch-hit walk from Braleigh Miller, who entered the game with a broken hand to try and help manufacture some runs. Miller walked and found her way to third base, eventually scoring on a first-and-third double steal situation when the catcher opted to throw out the runner at second base.

Miller scored, but the next pitch was a strike that notched the final out of the game to give Owosso its first berth in the state finals.

“They do not give up,” Cruz said of his team. “There was no quit in them, and that’s the way it’s been all season. We’ve been dominating some teams, but when we got into hard games like this one, I knew we wouldn’t give up. I knew we would manufacturer runs somehow, we just couldn’t manufacture enough.”

Taylor Moeggenberg, Wangler and Parker were the only Blue Devils with a hit. Somers notched two hits for the Trojans and five other teammates each had one. Parker went five innings with five hits, two runs and a strikeout. Irelan, who has pitched all but one inning for Owosso this season, only allowed three hits and struck out eight batters on the day.

The core group of Blue Devils return for the next couple seasons and they plan to return to this spot in the future.

“We’re really lucky,” Miller said. “The group of girls we have, we’re a really great group of girls and I love each and every one of them like a sister. It’s just an inseparable bond.”

ACME — The race for the lead tightened by the end of the third round of the 104th Michigan Open.

'I got this': Moeggenberg's walk-off HR sends Blue Devils to MSU

GRAND RAPIDS — Taylor Moeggenberg saved this one up for a long time.