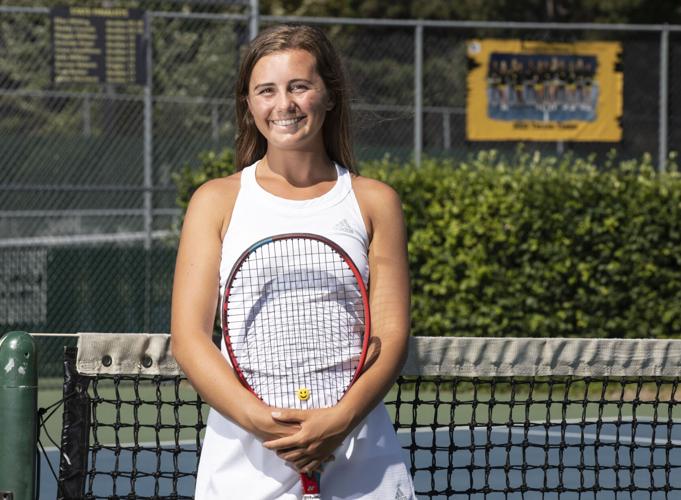 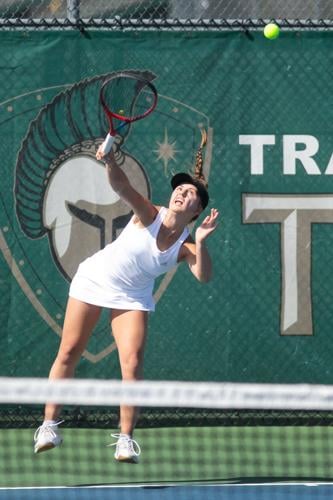 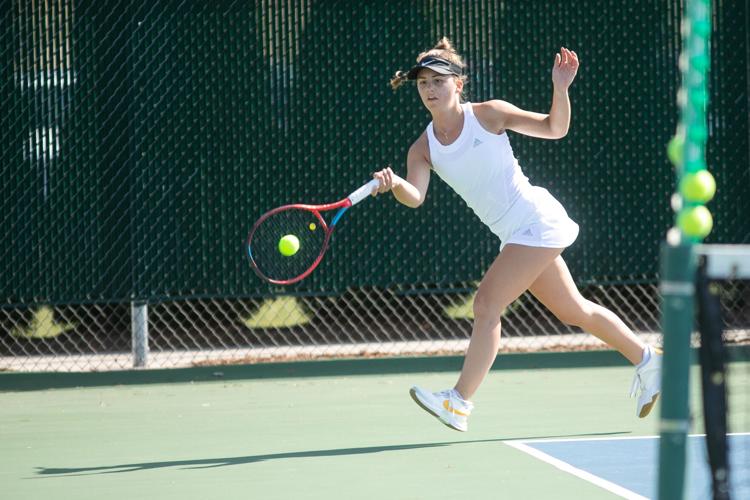 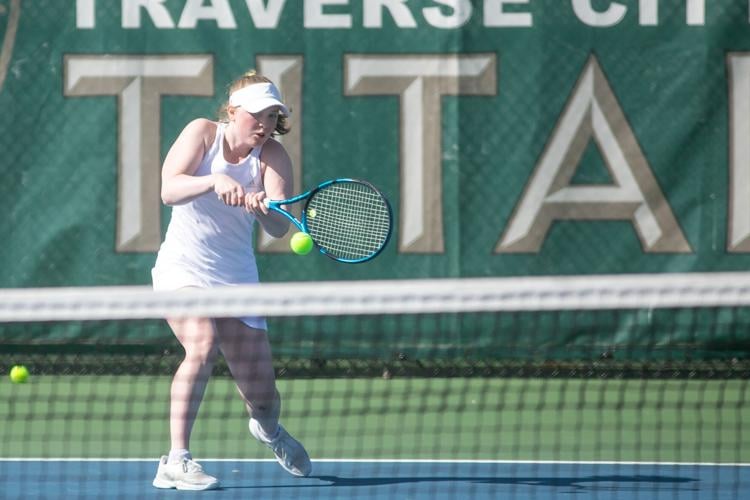 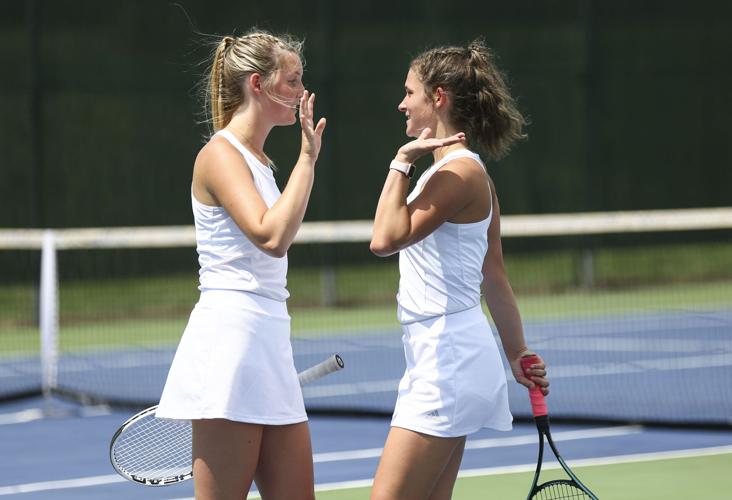 TRAVERSE CITY — Phoebe Walker knew the step up to No. 1 singles was a big one.

The Traverse City Central junior handled it exceptionally, producing a better record at the top flight than a year ago at No. 2 singles, earning the Record-Eagle’s 2022 Girls Tennis Player of the Year in the process.

“It was more mentally and physically challenging,” Walker said. “The step from two to one is just so drastic. It’s hard going against the other school’s best player every time. It took a bigger toll on me than last year.”

But she took a bigger toll on opponents as well.

Walker said she had to “force up” her level and focus on the process of becoming better.

“She’s the epitome of working hard to reach your goal,” Central’s first-year head coach Lisa Seymour said. “She did all the preparation she could to have a successful season.”

Walker played in offseason tournaments to hone her game as she blended going to the net into her strong baseline and serving game.

“Coach Lisa is amazing,” Walker said. “She really motivates all of us to improve our game. Her coaching style is definitely rigorous, but it definitely paid off.”

Seymour said Walker’s leadership made her a perfect candidate for team captain, a role she embraced by keeping the team focused during practices.

Walker, who likely would have played at No. 3 or No. 4 singles during the 2020 season that was canceled because of the COVID-19 pandemic, said one of her goals is to play collegiately.

“I definitely learned to cherish every moment now that one whole season was stripped from me,” said Walker, who replaced her sister Ivy at No. 1 singles.

Ivy Walker was a two-time Dream Team selection in 2019 and 2021. Ivy even warned her younger sister that No. 1 singles would be much harder.

Phoebe posted one more win than her sister, including a perfect 10-0 record in Big North Conference play, winning the league championship and a match at the Division 1 state finals to help the Trojans to a top-10 finish. She also won the Up North Invitational title.

“It’s not work for her,” Seymour said. “She loves the game.”

The Elks all-state No. 1 singles player enjoyed a 21-7 season, going undefeated in the Lake Michigan Conference. Won regionals and fell in state quarters in a third-set tiebreaker.

Posted a 17-11 record at No. 2 singles for the Trojans. Won the Big North Conference championship and advanced to the state quarterfinals. Put up top wins over TC St. Francis, Okemos, Hudsonville, Davison and Utica Eisenhower.

The most wins of any single area player, she went 27-4 at No. 2 singles. Undefeated in LMC for a title there, won regional championship made it to the Division 4 state championship match. Two-time team captain earned all-state.

The second-most wins of any areas player, the Elks freshman racked up a 25-5 record at No. 3 singles. Won a Lake Michigan Conference title and advanced all the way to the state championship match.

The Big North Conference runner-up and Division 2 No. 4 singles regional champion won the most matches this season for Petoskey, posting 20 wins to only six setbacks.

Team captain rung up 15 wins for Petoskey, including Big North runner-up honors and a regional championship as a senior.

Ended the season with a record of 11-9, but that conclusion was on a strong note, resulting in the Vikings’ only Big North Conference flight championship. Also won in Division 2 regionals over Grand Rapids South Christian.

All-state No. 1 doubles team lost in the state quarterfinals in a third-set tiebreak. Put up a 15-9 record to win Lake Michigan and regional titles.

Senior and team captain David paired up with Lurvey, who was new to the sport this year but has a background in volleyball. Finished the season 19-5. Conference champs and won a state finals match.

In his second year guiding the Elks, Schulte helped the team make history, beating St. Francis for the first time in school history and winning Elk Rapids’ first regional championship. The Elks also finished fourth at the state finals, the highest-ranked public school in Division 4 (along with North Muskegon, which also tied for fourth).

Made a big jump from No. 4 singles to No. 1 this year, and came away with a winning record at 16-14. Advanced to the second round of the state finals, falling in three sets to No. 6-seeded Jadyn Koenes from Grand Rapids Northpointe Christian.

Big North champion was 15-9 and posted a victory in the state finals. Logged wins over Rochester Adams, Okemos, Hudsonville and Midland Dow.

Petoskey’s No. 1 singles player and team captain had 12 victories, including runner-up spots in the Big North and at regionals.

Went from No. 3 doubles last year to No. 3 singles this year and posted a 17-12 record. Conference and regional finalists behind Elk Rapids state finalist Anneka Croftchik.

Won a regional championship for Petoskey at No. 3 singles, coming in second in the Big North Conference behind Linck.

Made the leap from No. 4 doubles to No. 4 singles and responded with a 20-win season and her second Dream Team spot. Made it to the second day of states after topping Lily Brown from Elk Rapids in three sets in the quarters. Fell to eventual state champ Hannah Lourido 4-6, 4-6 in the semifinals.

The Trojans’ No. 2 doubles tandem went 24-3 to win Big North and regional championships, advancing to the state quarterfinals.

The senior-freshman combo produced a 24-5 record at No. 3 doubles for Central, winning Big North and regional championships and advancing to the state quarterfinals.

Team dealt with injuries throughout the season, but were 9-6 when Caitlin played. Hailey had 11 total wins, with Makenna Ebling filling in later in the season after Caitlin couldn’t continue with her injury. Caitlin is headed to Loyola-New Orleans to play collegiately.

The freshman duo stepped it up their first year on varsity and went 21-9, winning conference and regionals titles and making it all the way to state semifinals and falling to the eventual state champs from Ann Arbor Greenhills.