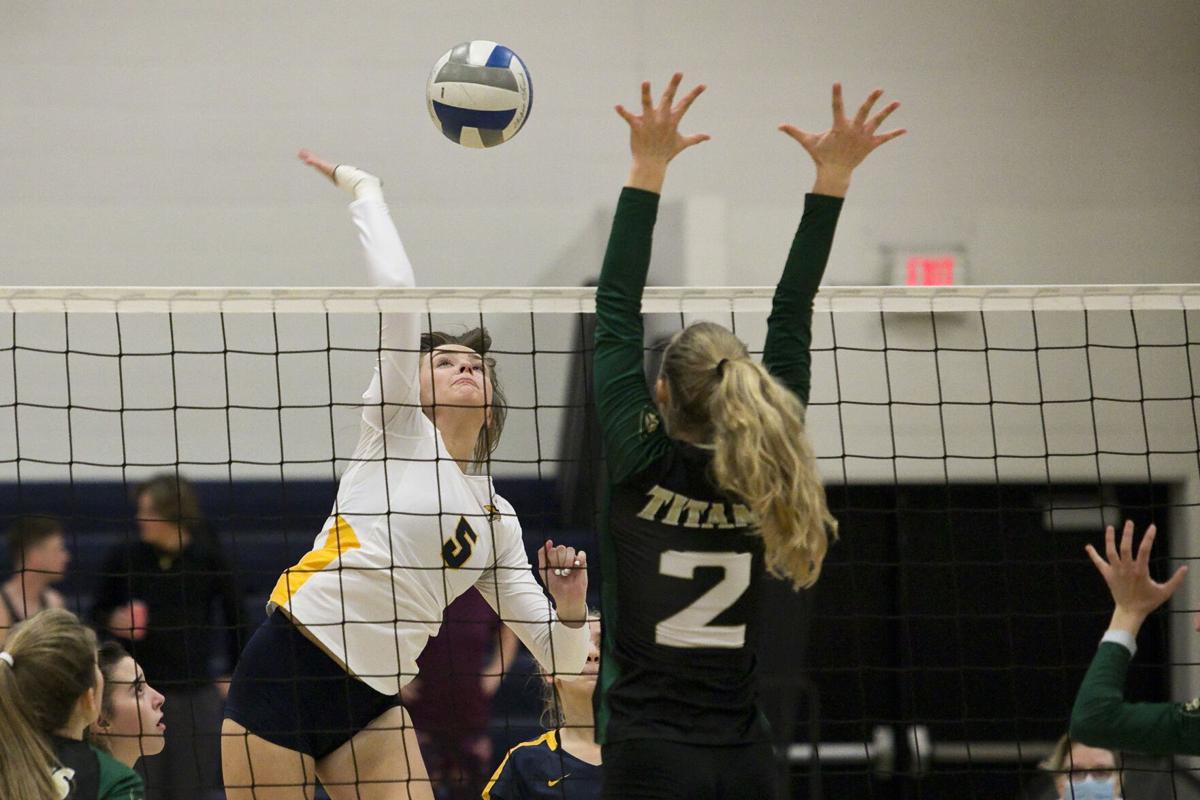 Cadillac’s Caliey Maserang (5) spikes the ball while Traverse City West’s Sydney Kane (2) tries to block in the second set of an Oct. 20 match. 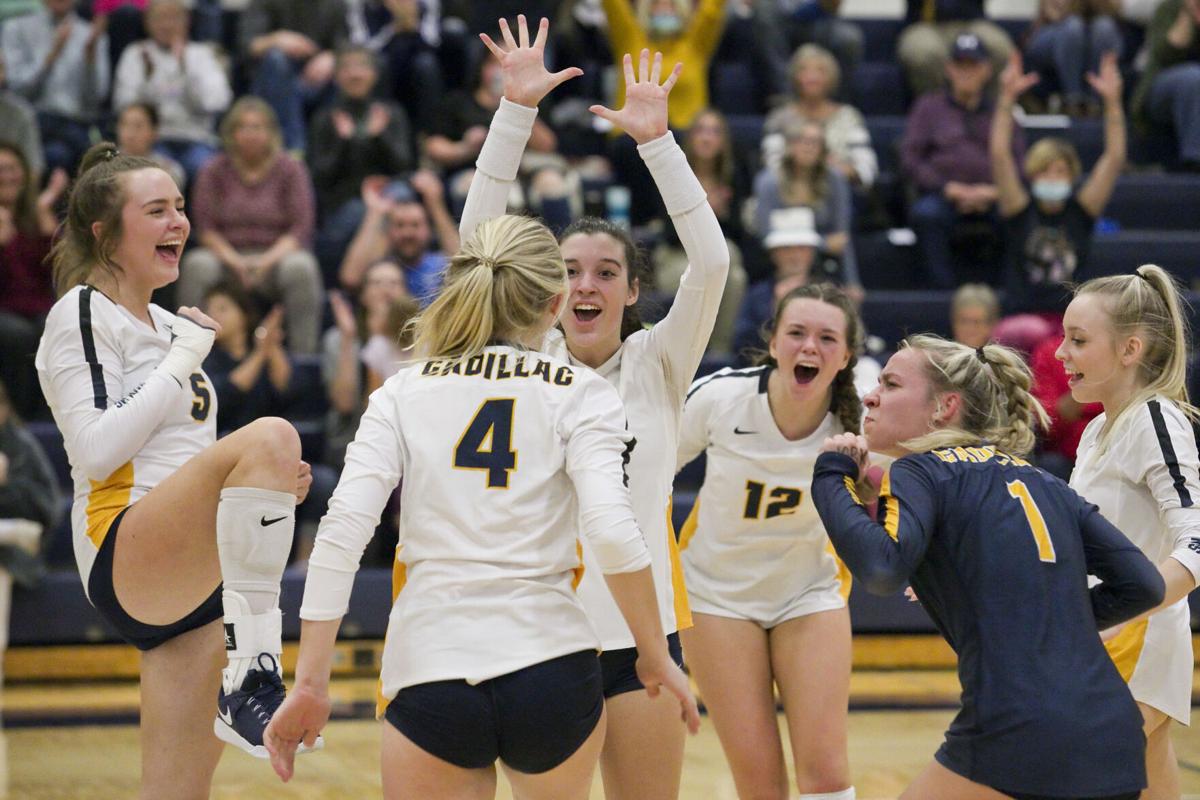 Cadillac players celebrate a point in the third set of an Oct. 20, 2021, match against Traverse City West.

Cadillac’s Caliey Maserang (5) spikes the ball while Traverse City West’s Sydney Kane (2) tries to block in the second set of an Oct. 20 match.

Cadillac players celebrate a point in the third set of an Oct. 20, 2021, match against Traverse City West.

MIDLAND — Tuesday proved to be the end of the line for the Cadillac Vikings.

The perennial contender fell in straight sets (25-17, 25-23, 25-21) to fifth-ranked North Branch in the Division 2 volleyball state quarterfinal match at Midland High School. This isn’t the first time North Branch (45-8) brought the Vikings’ (42-12-1) season to a premature end. The Broncos also knocked off Cadillac in the 2014 and 2015 state quarterfinal matches, winning the state title in ‘14 but falling to Ann Arbor Father Gabriel Richard in ‘15.

Cadillac head coach Michelle Brines said a dozen errors, both serving and hitting, sunk the Vikings in the first set.

“We were scratching and clawing,” Brines said. “The loss certainly wasn’t for lack of effort or wanting it.”

A questionable call with the second set tied 23-23 turned the tide when the line judge ruled a ball inbounds that Brines said was clearly out of bounds.

“The second set, we were right there,” Brines said. “I’d never blame it on a line judge, but that would have made it 24-23 us instead of 24-24 them. That was really back and forth in that second set.”

The third set featured a lot of long rallies, but Brines said Cadillac did not win many of those.

“We could have played better, but North Branch is a very good team,” Brines said. “We knew we would have to bring our A-game, and unfortunately that’s not what we had tonight.”

North Branch, which has won three state titles and finished second four other times since 2007, features a young starting squad with five sophomores — including 6-2 middle hitter Kaela Chingwa — a junior and just one senior.

The improvements the Vikings made from the first match of the season to Tuesday night were amazing, Brines said.

“The growth we made, it was an entirely different team at the end. I’m just really proud of them,” she said. “Tonight didn’t go the way we wanted it to, but we did a lot of good things. Certainly nothing to hang our heads about.”

The Vikings, who were co-Big North Conference champions this season, come up just one step shy of back-to-back appearances at Kellogg Arena in Battle Creek. Cadillac, which finished ranked eighth in D2, played on the big stage in the semifinals at Kellogg in their 2013, 2016 and 2020 campaigns. The 2020 season state semifinals and finals were actually played in January of this year because of delays due to the COVID-19 pandemic.

Four seniors, including Brines’ daughter Renee Brines as well as Caliey Masserang, Mady Smith and Julia Jezak graduate from the program. Brines finished with 22 assists, 14 digs, four kills and an ace. Masserang had seven kills and two blocks. Smith had 17 digs, three kills and a block. Jezak had 10 digs.

“They’ve paved the way for future success,” Brines said. “They’re a huge loss for us.”

Renee Brines is a candidate for Michigan’s Miss Volleyball award, an honor given to the best volleyball player in the state.

“It’s extra emotional when your own kid is done,” Michelle Brines said. “But onto bigger and better things. She’ll do great things in college.”

Cadillac could move up to Division 1 next season.