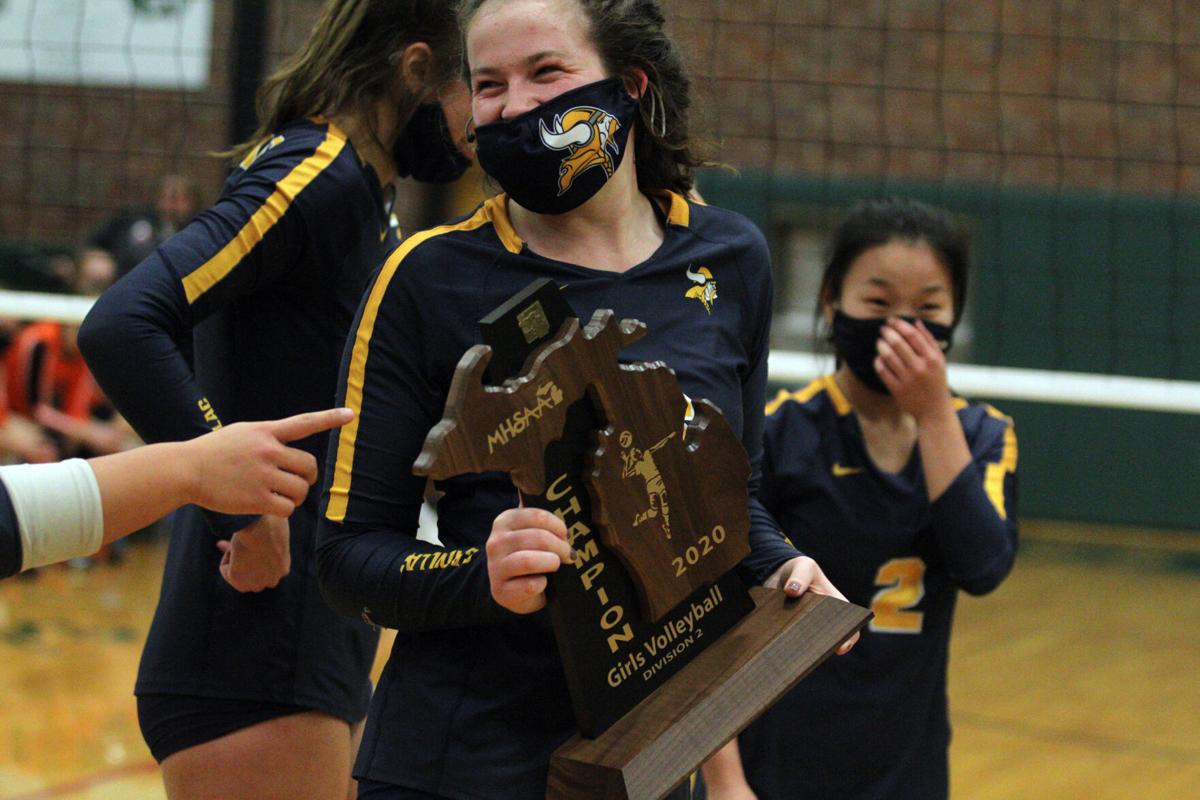 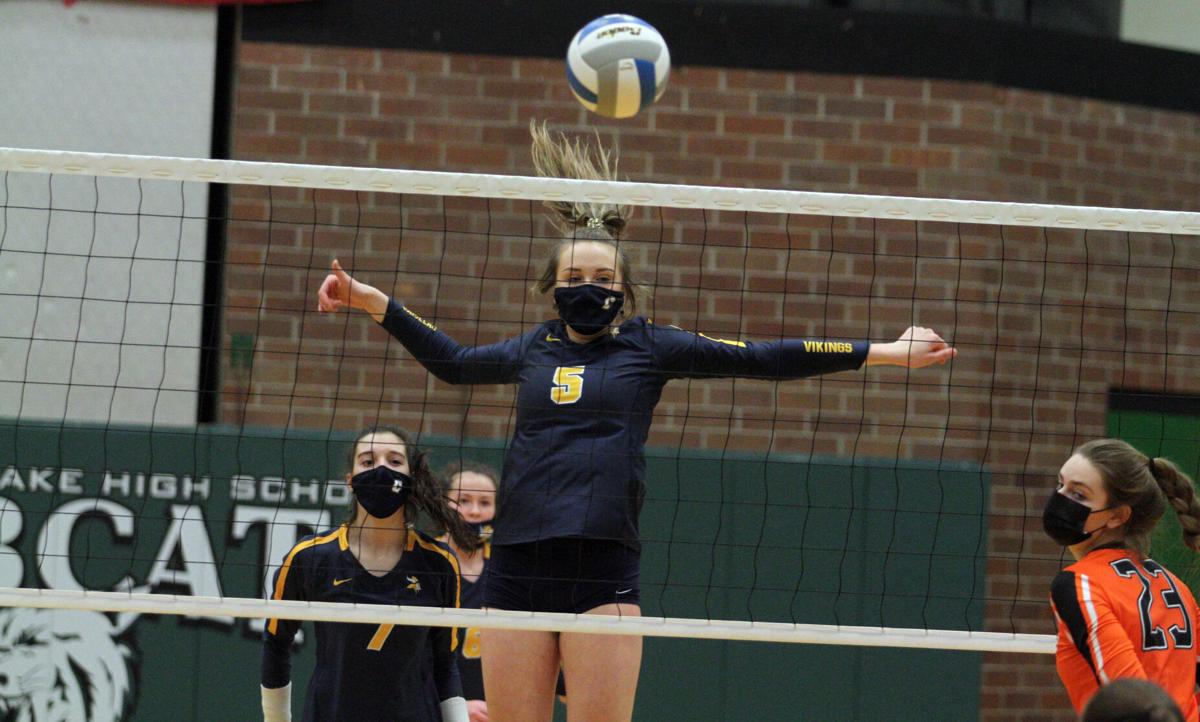 Cadillac's Caliey Masserang (5) follows through on a kill Thursday against Escanaba in Houghton Lake as the Eskymos' Katelyn Stalboerger (23) looks on. 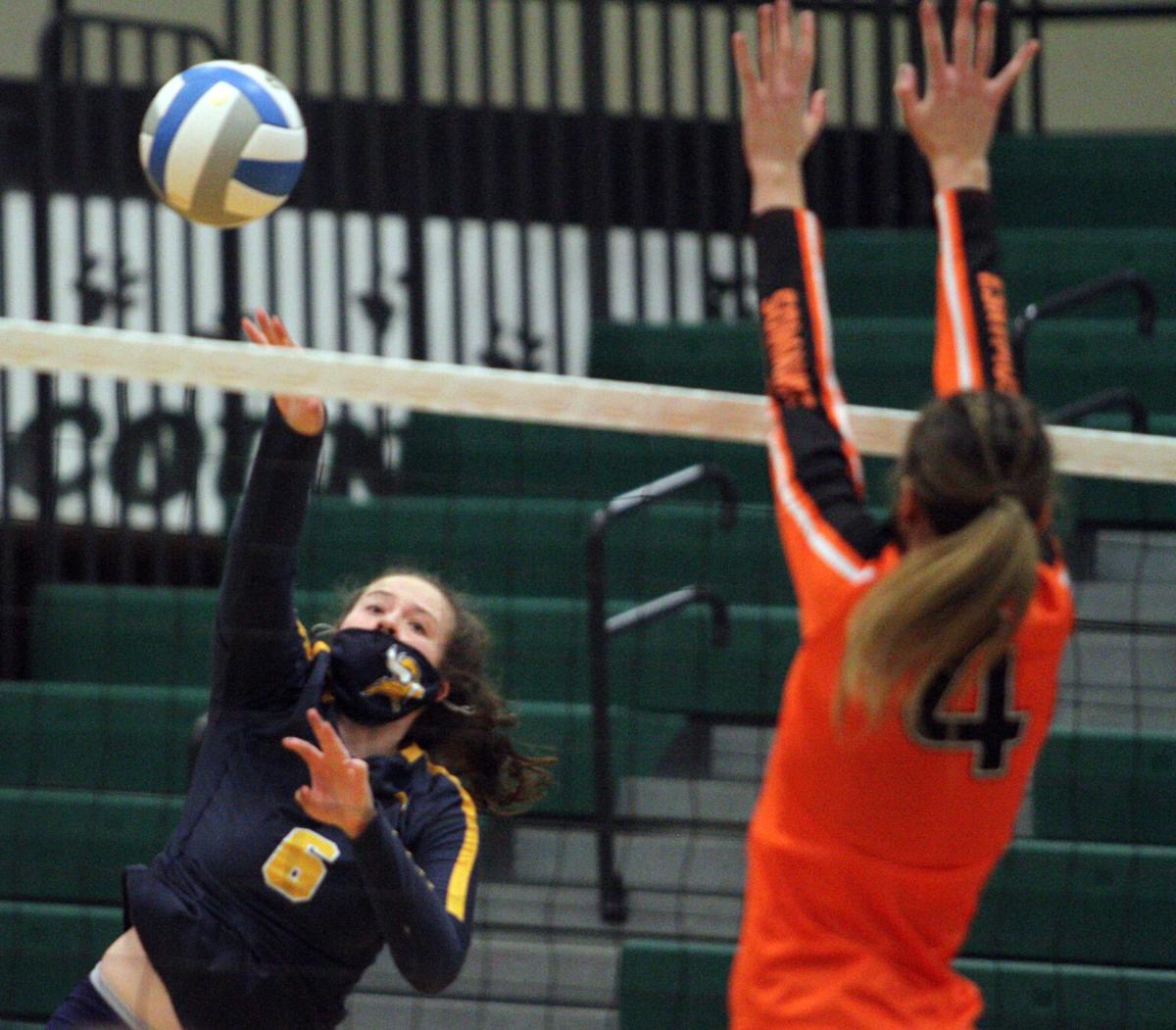 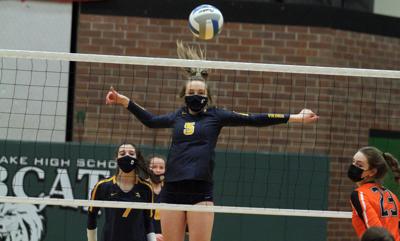 Cadillac's Caliey Masserang (5) follows through on a kill Thursday against Escanaba in Houghton Lake as the Eskymos' Katelyn Stalboerger (23) looks on.

It eluded Brown — and the Cadillac Vikings — the last two seasons. So she made sure to hug the wooden Michigan-shaped award tightly soon after head coach Michelle Brines handed it to her.

It’ll go in the Vikings trophy case soon enough, but for quite some time, Brown cradled it in her arms fresh off a 27-kill night.

“I wasn’t letting anyone have it for a while there,” Brown said after posing with most of her teammates individually for photos with the trophy.

The Vikings captured a Division 2 regional championship that’s slipped through their grasp the last two seasons with a 25-21, 25-20, 25-17 victory Thursday over Escanaba in Houghton Lake.

“I was jumping up and down screaming because I haven’t gotten that since my freshman year,” said Brown. “Last year we lost by two in the regional and we were so close. And so that made me want it even more this year.”

No. 3-ranked Cadillac (42-5) advances to play No. 12 Birch Run in Tuesday’s quarterfinal at Alma. Edwardsburg and No. 1 Grand Rapids Christian play in the rest of that half of the bracket.

The Vikings played without 6-foot-3 middle blocker Carissa Musta, so 5-9 junior Madyson Smith stepped into the middle. Smith ended up with three blocks and a kill.

Musta missed all of regionals because of COVID-19 contact tracing and quarantine, but Cadillac coach Michelle Brines said she’ll be able to return to practice Sunday and play in Tuesday’s quarterfinal.

“Maddy has done a great job of stepping in, but it is different,” Brines said. “You’re playing one way the whole season, and then you get the phone call on the way regionals. But like I said, kudos to the team because I said, ‘Next man up.’ ... That’s pretty intimidating, playing these big bangers, but she did a great job and she wasn’t afraid, so that was huge.”

“Last year (in regionals) was huge disappointment,” Brines said. “The year before we got it handed to us, but last year was a heartbreaker. You could tell it fueled Macy. She was on fire tonight, thank God.”

Escanaba finishes the season 9-4. That’s right, the Eskymos played only 13 matches all season and still made it to regionals for only the second time in school history.

“Between our school closing for for two and a half weeks and then other schools that were supposed to play closing down,” Escanaba coach Adam Lambert said. “Up in the U.P. it’s pretty rampant right now.”

“This is a well-coached team,” Lambert said, pointing to the Vikings after the match. “They’re disciplined. We got some sad girls but after all that, this is an amazing season for us, so we’re pretty excited.”

Maysie Lancour and Bailey Barron led the Escanaba defense with 10 and 11 digs, respectively, while the pair also accounted for 22 out of the team’s 36 serve receives passed to a setter as the Eskymos defense posed some challenges to Cadillac’s hitters.

“They do a lot of unorthodox things that we don’t see,” Brines said. “They play three back. We don’t play anybody that does that. We saw a different defense, we saw a different serve receive. We put chairs out in practice and tried to simulate it with our hits. It’s hard to simulate.”

As a result, the Vikings took some time to pull away in each set.

Cadillac and Escanaba were tied 9-9 in the first. Cadillac went on a 7-0 run at one point to surge into the lead, but Esky bounced back with a 6-0 spurt of its own. An 8-1 Cadillac run finished off by a Brown spike through the middle of the defense put the Vikings in control, and Brown also closed out the set with a kill.

Escanaba led 12-11 in the second before Cadillac began serving up Brown from the back row, resulting in three kills and a 6-1 run. Brown sealed the 25-20 win with a tip over the blockers that fell in the middle of the Eskymo defense.

Back-to-back Masserang aces fueled a Cadillac third-set run to surge into a 16-9 lead en route to wrapping up the match 25-17.

“It was definitely not our best game,” Brown said. “We came out really slow. I think that kind of has to do with this is our first game since we started online school. People sit down at home all day and sleep in. So I think we need to do something to fix that before our next game, maybe go out and do something as a team. But I would say that probably played a part in how we played today.”

Birch Run (39-5) beat Saginaw Swan Valley 25-20, 25-16, 25-20 on Thursday to win the school’s first volleyball regional title since 1991. Panthers senior outside hitter Emma McIlhargie came into the postseason with more than 1,550 career kills to oppose Brown and the Vikings in Tuesday’s quarterfinal.

“My freshman year, we were at the quarters,” Brown said. “We lost some pretty tight games that we maybe should have won, so that I just want to be there and to experience winning. I want to go out there and keep going.”

Leland forced to opt out of playoffs

CADILLAC — Manistee ended up with a bye into the Division 2 district finals.