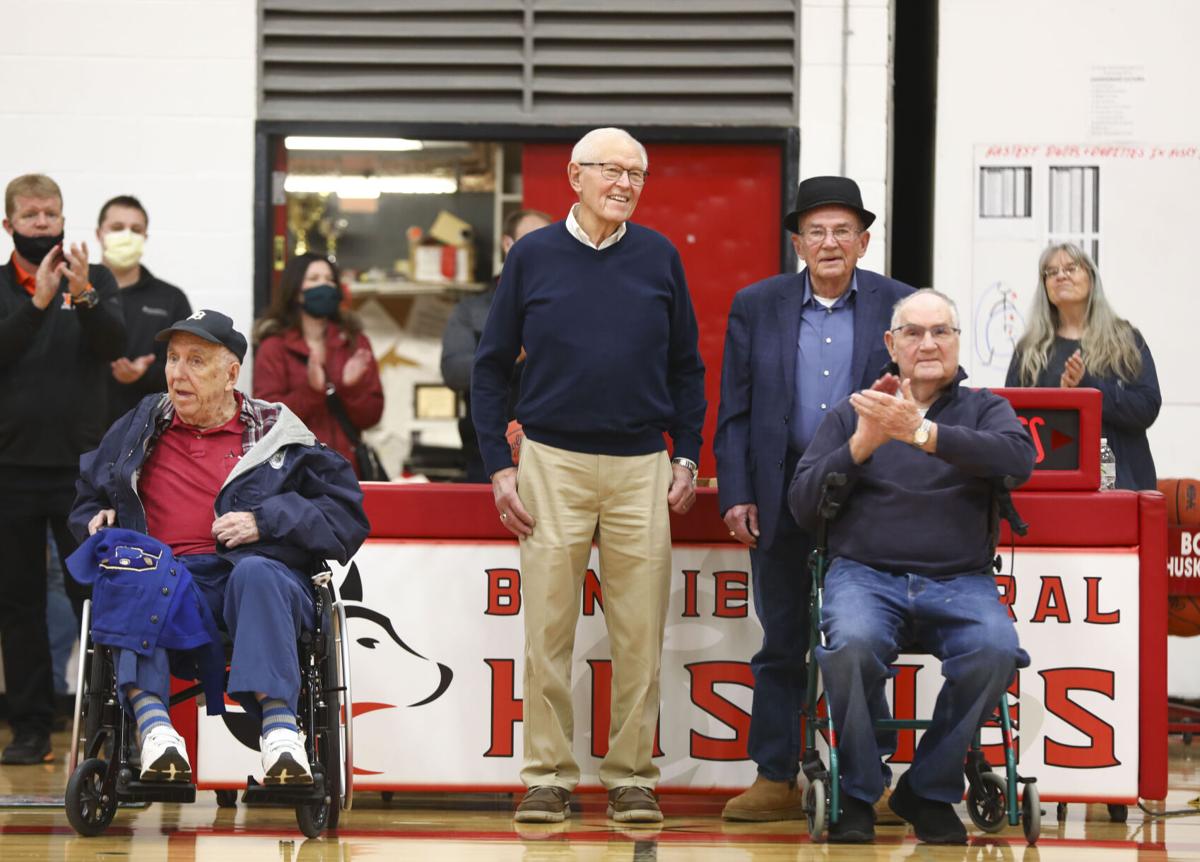 Left to Right: Larry Magnity, Ben Blaho, Chuck Bigelow of the 1952 Copemish Boys Basketball State Runner-Up team. Far right: Fred Scarbrough, a player for the 1951 team that advanced to the quarterfinals. The four were recognized before the Benzie Central Varsity Boys Basketball game against Kingsley at Benzie Central High School in Benzonia on Friday. 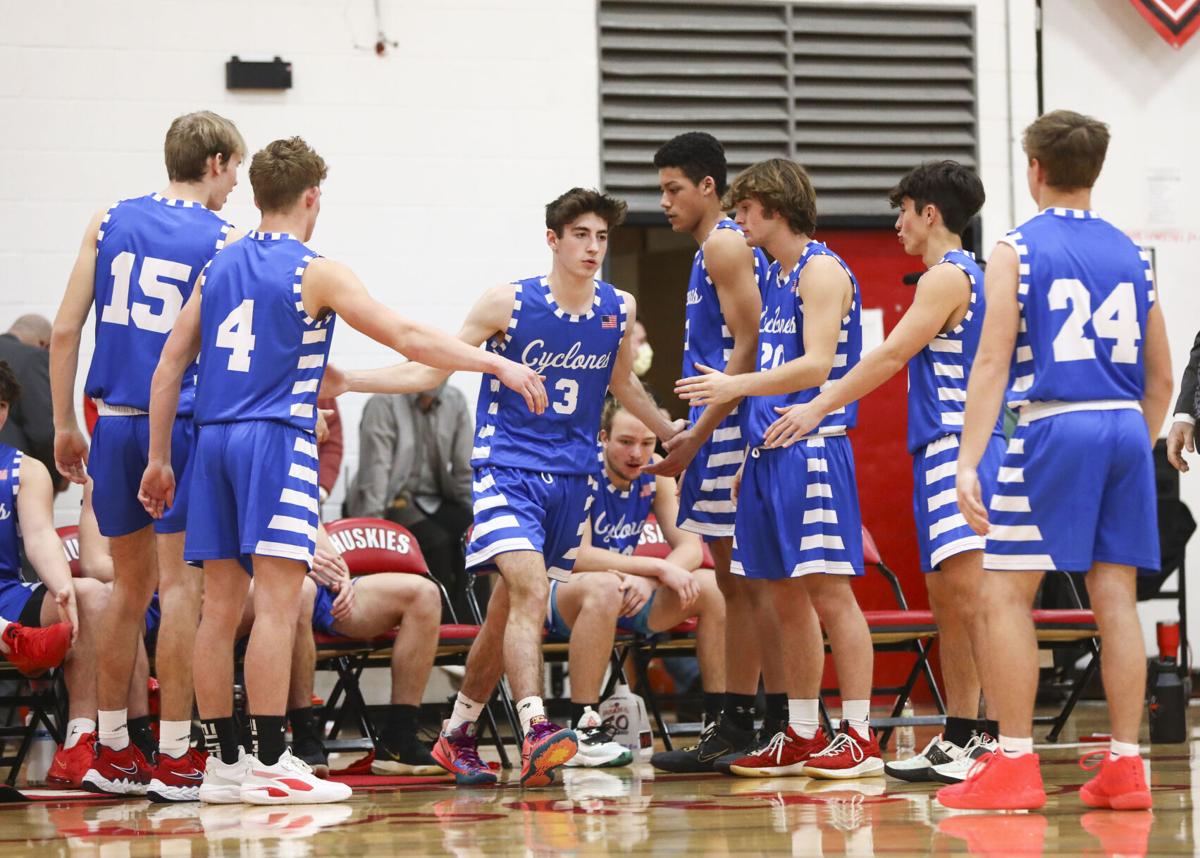 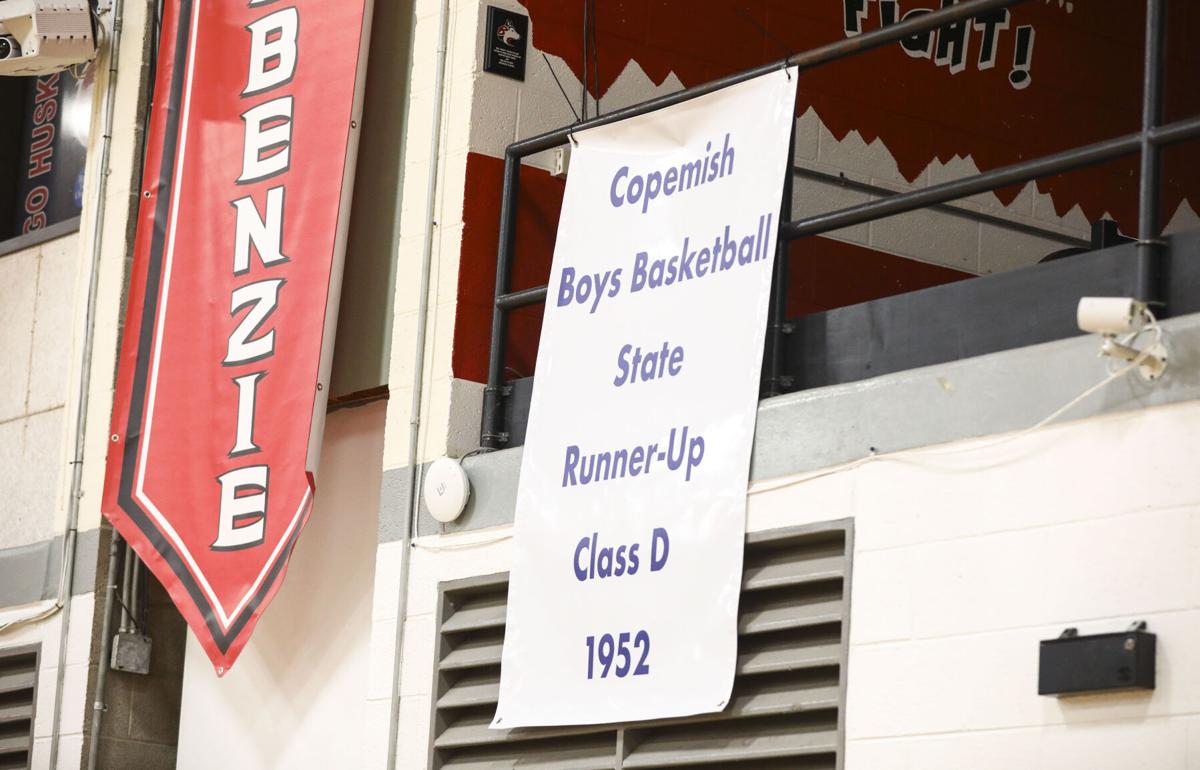 A banner honoring the 1952 Copemish Boys Basketball State Runner-Up team hangs in the gym at Benzie Central High School in Benzonia on Friday.

Left to Right: Larry Magnity, Ben Blaho, Chuck Bigelow of the 1952 Copemish Boys Basketball State Runner-Up team. Far right: Fred Scarbrough, a player for the 1951 team that advanced to the quarterfinals. The four were recognized before the Benzie Central Varsity Boys Basketball game against Kingsley at Benzie Central High School in Benzonia on Friday.

A banner honoring the 1952 Copemish Boys Basketball State Runner-Up team hangs in the gym at Benzie Central High School in Benzonia on Friday.

Those are three things Copemish players on the former school’s historic 1952 team hadn’t seen before.

The Copemish Cyclones played in the 1952 Class D boys basketball finals at Jenison Fieldhouse on the campus of Michigan State University, falling to Fowler. They were honored at Friday’s varsity boys basketball game between Benzie Central and Kingsley.

“Us kids were farm boys,” said Ben Blaho, a forward on the ‘52 team who now lives in Petoskey. “You didn’t go anywhere. Our parents didn’t take vacations. It was everybody’s first time in a hotel.”

They also hadn’t seen a glass backboard before, and they were surprised when the starters were announced prior to the championship game in a darkened arena with a spotlight.

Most of the former Copemish district would be consolidated into Benzie Central in 1963, but the Cyclones won district championships every year from 1951-56 with a school that only had around 80 students.

The large Class D runner-up trophy held by Merle Smith in postgame photographs was lost in the school’s consolidation.

“We’re grateful to the Benzie athletic department and for the ones who can’t be here,” Copemish 1953 grad Chuck Bigelow said. “I’ve seen more people here in 15 minutes from Copemish than I’ve seen in years.”

Bigelow, an 86-year-old Mesick resident, was one of three 1952 team members on hand Friday night for a pregame ceremony honoring that team, along with Blaho and Larry Maginity. Fred Scarbrough, a player for the 1951 Cyclones that advanced to the Class D quarterfinals, was also there. Scarbrough’s younger brother Tom played on the 1952 squad.

The Cyclones set the state single-game points record with a 140-24 win over Bear Lake in the 1952-53 season, a mark eclipsed by several teams since, but that still stands tied for seventh in Michigan history. The Cyclones broke the 100-point barrier four times in the 1953-54 season, with three others in the 90s. All without the benefit of 3-pointers.

“I got hired a few years ago and started digging into the history of the program right away,” Crocker said. “And that was one of the ones that jumped out because, obviously, they had the deep postseason run. And No. 2 was because we hadn’t missed the opportunity to commemorate it. So that really stood out as an opportunity to celebrate something that most no one else really knew about. ... Most of the kids weren’t aware that Copemish ever had a school, let alone a good basketball team.”

Benzie did similar events for two past football teams — the Honor Knights in 2017 and Benzonia Hilltoppers in 2018 — that were also from small community schools consolidated into what is now Benzie Central.

The Copemish basketball teams that made history started on the playgrounds of the school that first opened in 1889 in a one-room schoolhouse that burned down and was replaced in 1910 by the building with grades K-10 that still stands in Copemish under private ownership.

Bigelow’s father, Charles Sr., was in Copemish’s first 10th-grade graduating class (he later went back when 11th and 12th grades were available and graduated a second time), and his younger twin siblings Kenneth and Karen graduated in the school’s final 1963 class.

“When I was in the fourth grade, on the playground we’d play basketball,” said Blaho, just weeks before his 87th birthday. “And the fifth graders always wanted to play. There would always be a fight if we were beating them.”

So Copemish superintendent Earl Jewett assigned a varsity player to coach each grade and had games played in front of the entire school. Fights went away, and the level of basketball play increased.

“I didn’t know it at the time, but I do now,” said Blaho, who’d later play in a game against the Harlem Globetrotters. “He molded us.”

The Cyclones featured three sophomore starters on the 1952 state finals team — Ed Suchy, Jerome Jakubik and Blaho, a 5-foot-11 defensive forward who sometimes also played center. Those three could have played as freshmen the year before, but freshmen weren’t allowed to play on varsity in those days.

Sharpshooting junior Mickey Finan led the team in scoring and set the Manistee County single-game points record at the time with 56. The Cyclones’ only other loss that season was their 51-40 season opener against Dickson, a school that’d be consolidated into what’s now Brethren, also in 1963. In between Dickson and Fowler, the Cyclones won 19 straight games, including eight in the playoffs.

“It’s been written that they could beat any team, even Class A,” Blaho said. “In the first quarter, we knew it was over. We were just hoping to get a shot off against their tall guys. ... We were proud to hold them to 55 points. They averaged 80 or 85 a game.”

Star left-handed guard George Fox would go on to coach Magic Johnson at Lansing Everett and earn induction into the Greater Lansing Area Sports Hall of Fame in 1990.

“He was as mystifying to our defense as the glass backboards,” Bigelow said. “Fowler was devastating. The glass boards were very new to us. The game before against Spring Arbor, there weren’t glass boards. We were just in awe of the whole situation.”

Maginity was the manager under coach Fish, who posted a record of 89-18 in five seasons.

“It was a great team,” said Maginity, a 1953 grad. “Fowler outran us and they had a big center. We just couldn’t keep up with them. We had a great run.”

TRAVERSE CITY — A star hangs above the backyard rink at the Deneweth household. The star has…