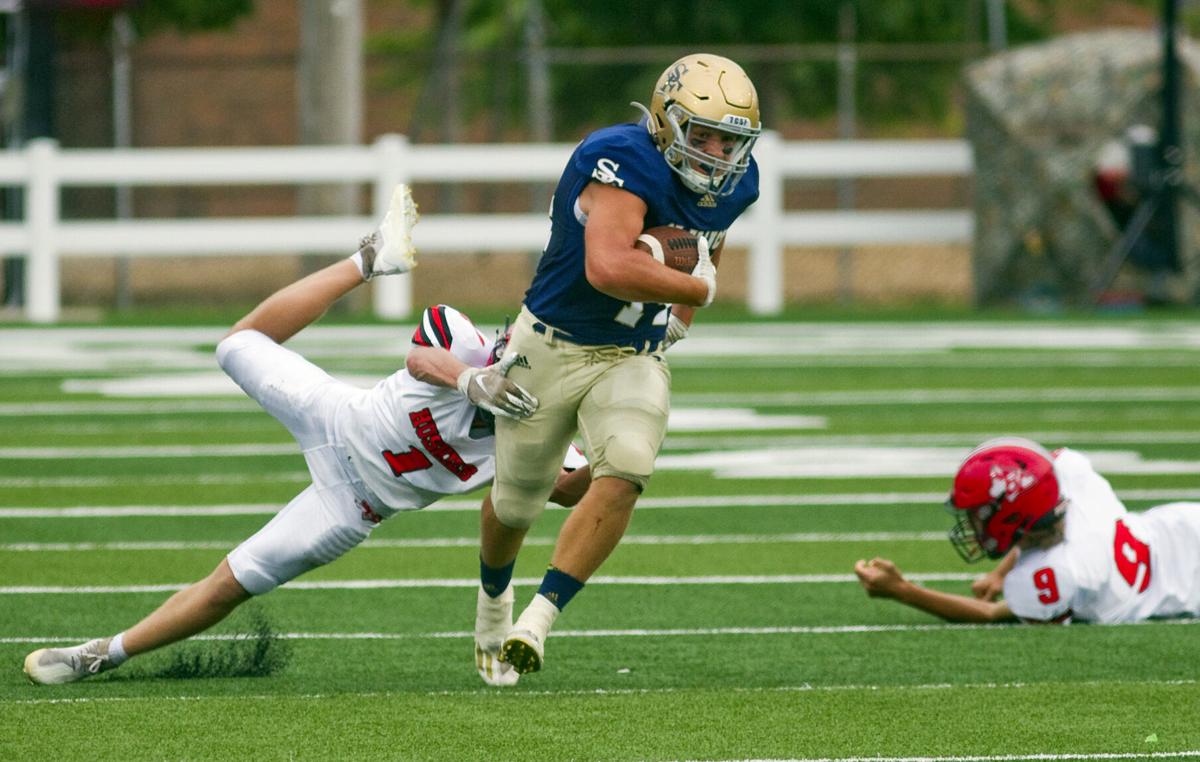 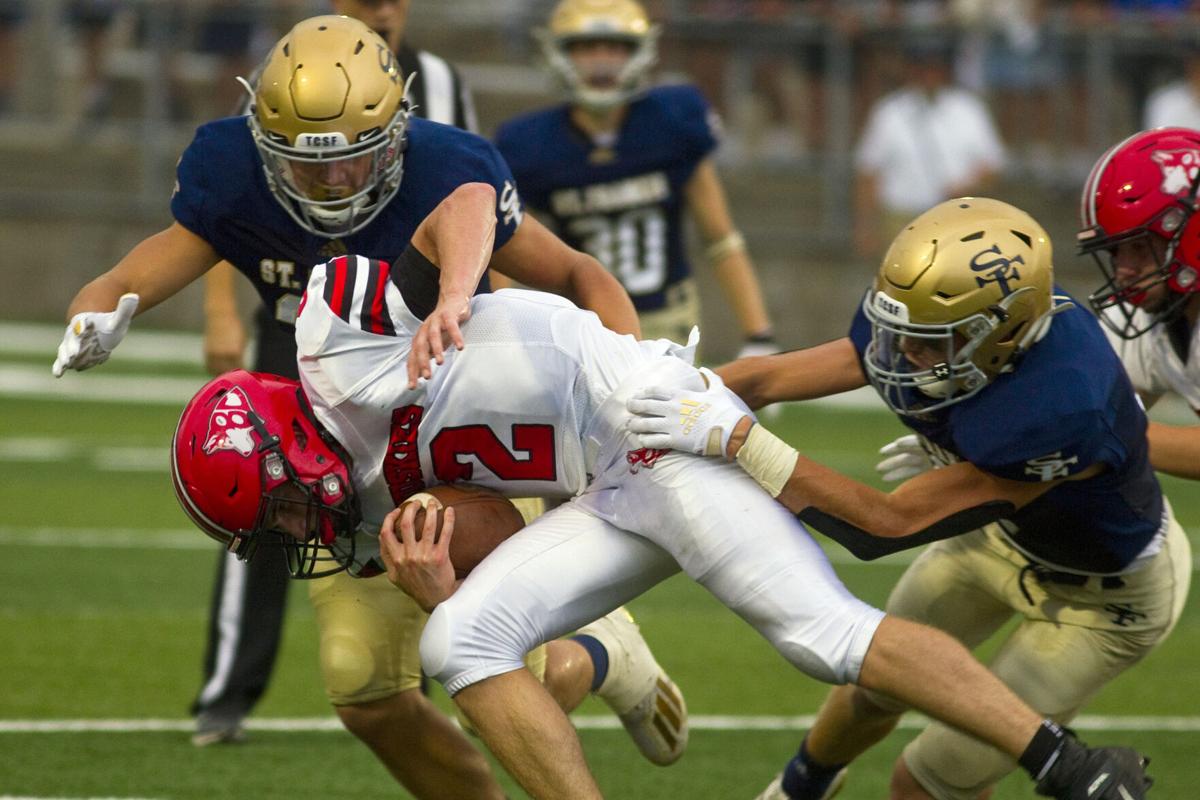 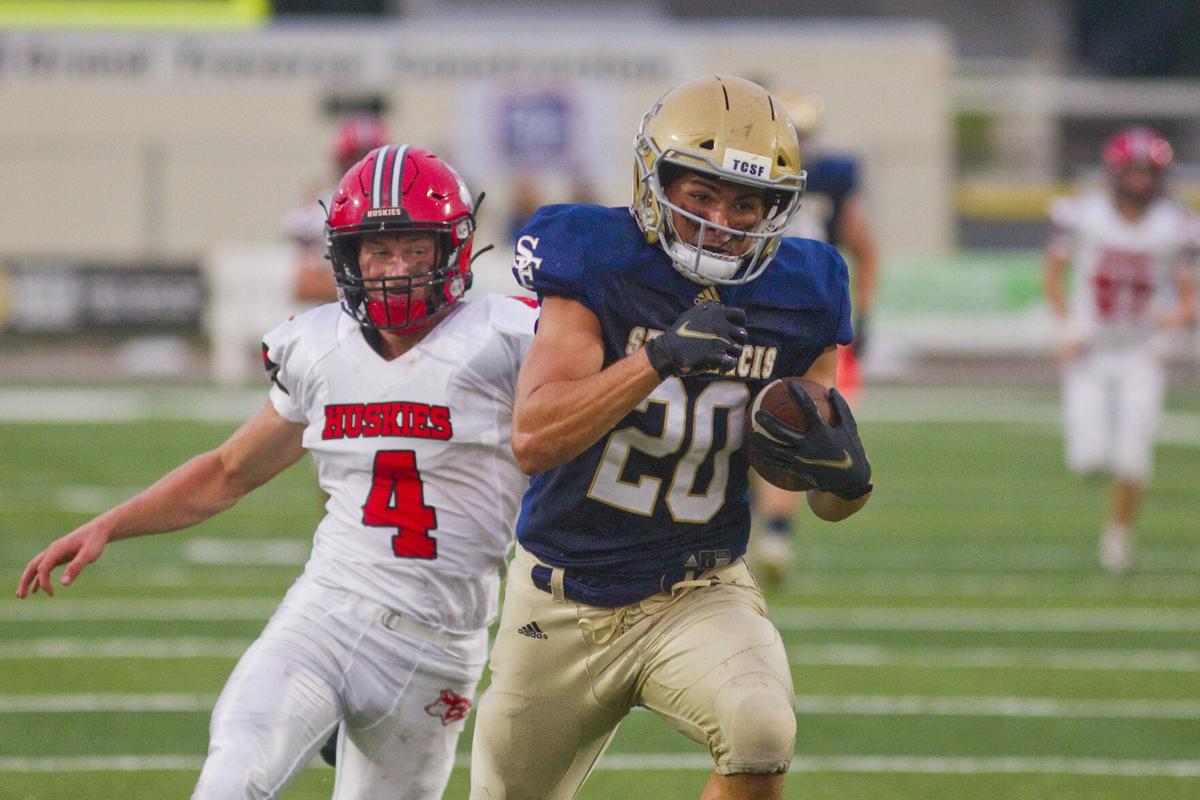 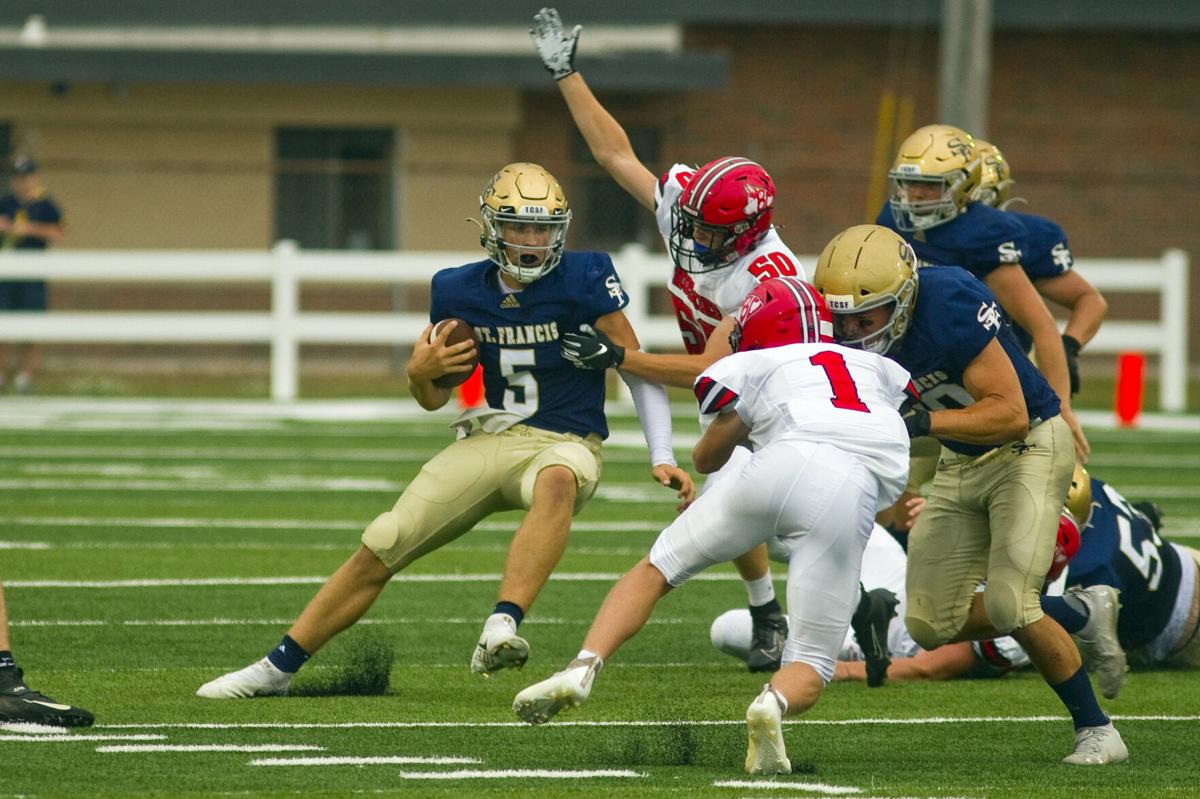 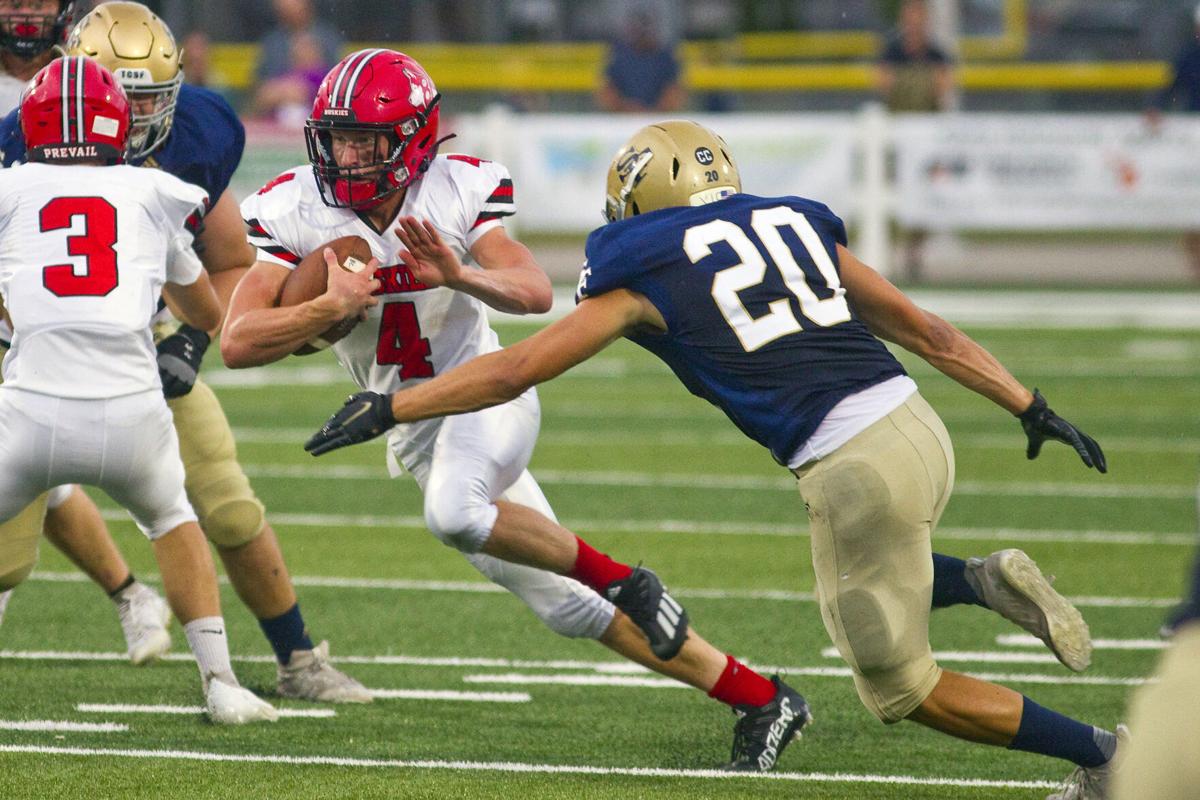 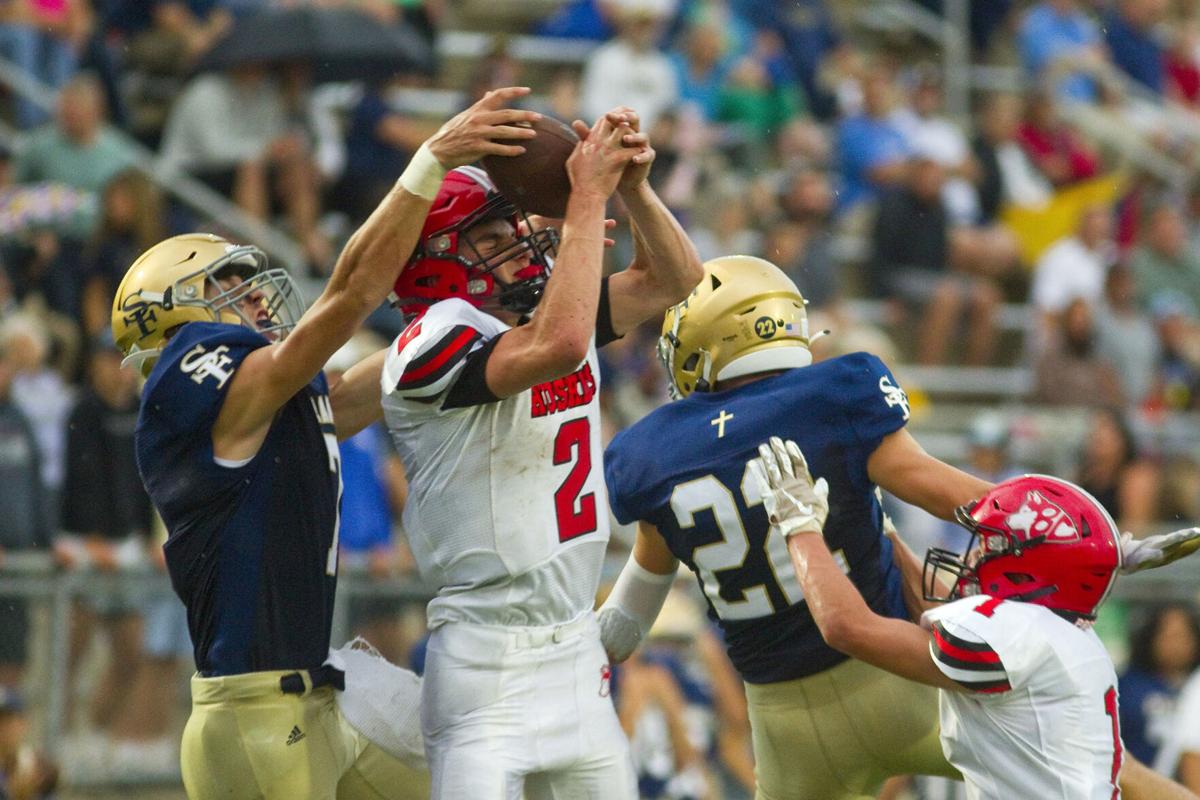 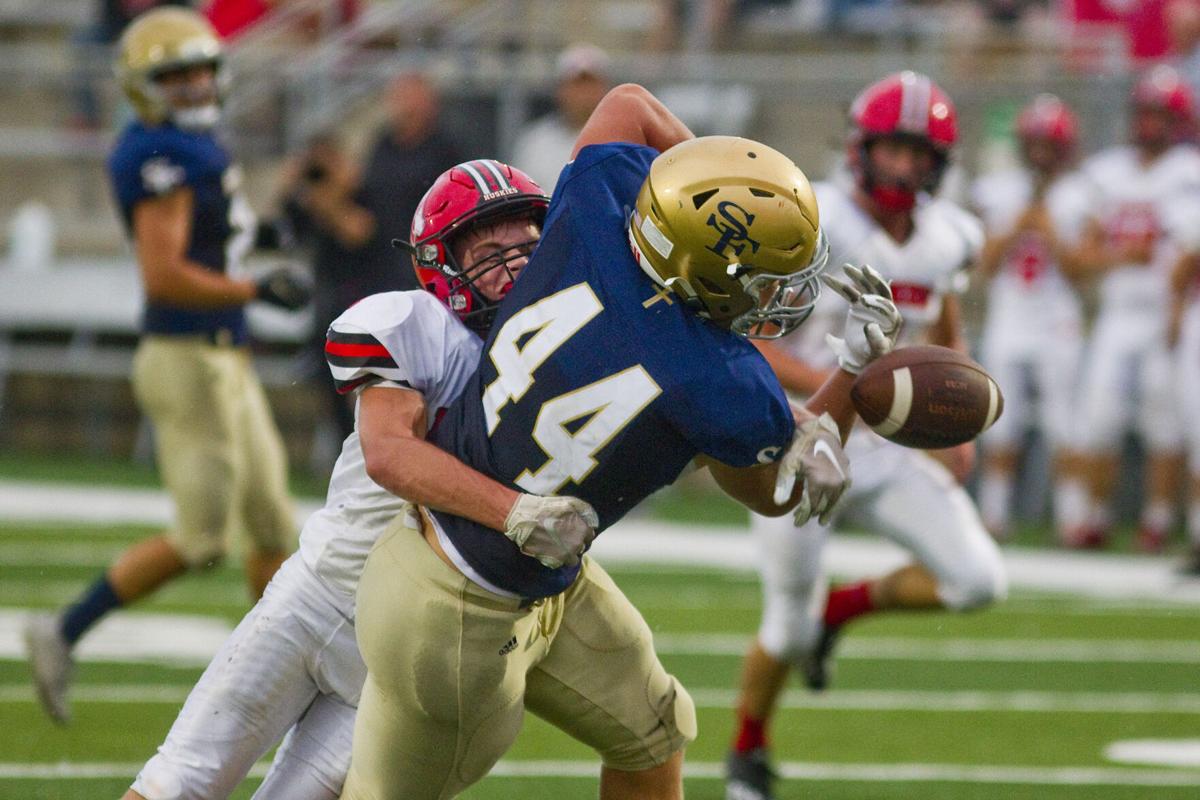 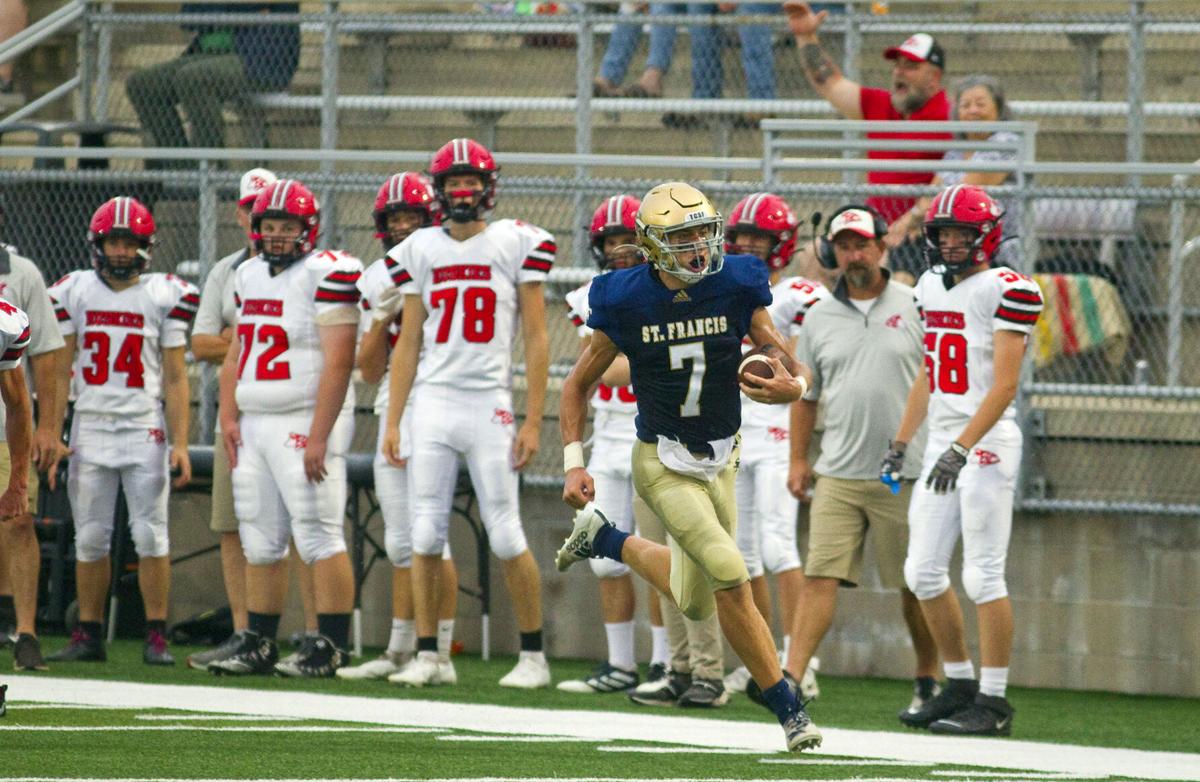 Traverse City St. Francis' Wyatt Nausadis (7) runs past the Benzie Central bench on his way to a second quarter touchdown in Friday's game at Thirlby Field.

Traverse City St. Francis' Wyatt Nausadis (7) runs past the Benzie Central bench on his way to a second quarter touchdown in Friday's game at Thirlby Field.

Even if he wasn’t, his 40 yard-per-carry average with 203 rushing yards and three touchdowns said otherwise.

It’s the Gladiators’ 40th straight win over the Huskies. According to available records, a St. Francis football team has not lost to Benzie in the history of both schools.

Senior quarterback Charlie Peterson completed three passes for 153 yards and three touchdowns, his longest being a 75-yard pass to Drew Hardy. Gabe Olivier caught a 53-yard snag for a touchdown on a pass from midfield that must have traveled 40 yards in the air. Hardy added a 25-yard TD reception.

“We’ve improved on that (passing) a lot over the last couple of years. I didn’t expect some of that for week one,” Peterson said. “Our receivers did a great job of creating separation and that’s just the name of the game. All I had to do is put it in their hands.”

Nausadis and Peterson combined to share 356 of the Glads 451 yards of offense. Benzie totaled 202.

Nate Childers carried the ball 20 times for 52 yards. Koscielski added 29 yards on the ground with 14 carries.

Nausadis, who’s now a junior at TCSF, was the quarterback for the Glads' JV team last fall. The basketball standout joined the varsity team for the playoffs and played out of the backfield but missed the Division 7 state finals because of a broken hip.

With Peterson returning at quarterback for his senior year, Nausadis shifted roles and stayed a running back.

“The quarterback position teaches you every position, so I picked up on it pretty easy,” Nausadis said.

Peterson said the two talked a lot in the offseason and knew what they could do as a tandem.

“It’s got to be nice having the fastest player on the field whenever you play anyone,” Peterson said. “He is a cheat code. If he played in Madden, you would give him the ball every time. He is that fast.”

St. Francis (1-0) plays Grayling next Friday for the second game of a doubleheader at Thirlby.

Grayling (1-0) opened the year with a 53-18 win over Roscommon after making an appearance in the Division 6 semifinals last season.

The Vikings fell to Montague in January, 49-14.

But before the Vikings went on a tear and won six straight games into the playoffs, they were handed their first loss of the season at St. Francis 42-20. Grayling opened that game with a 14-0 lead and maintained it at the half 20-14.

David Millikin tallied 297 yards of rushing in the win over Roscommon on 20 carries. Ethan Kucharek replaces Hunter Ventline at quarterback, and he threw for 143 yards with nine completions Thursday with two TDs to Dylan Cragg and Tayvion Hall.

Millikin had 85 yards against last year’s Glads defense, but he didn’t see as much volume as he had later in the season. He carried the ball seven times in that game.

Kickoff is at 7 p.m. in Traverse City.