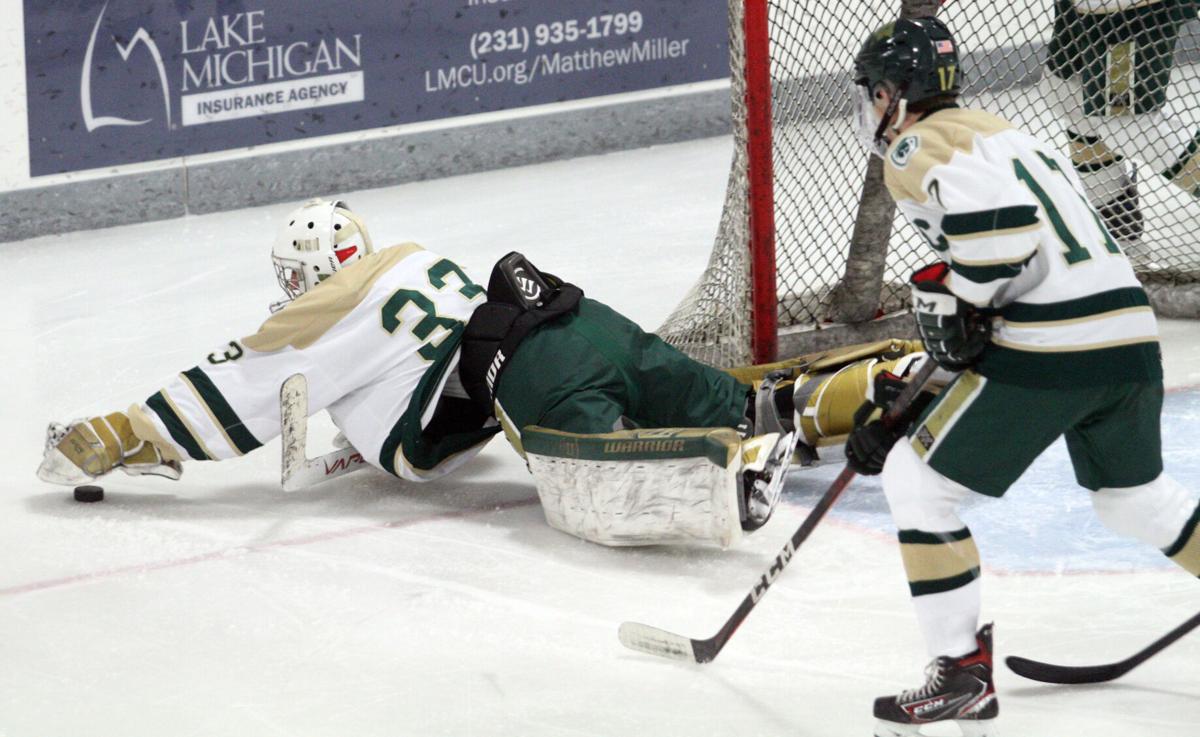 Traverse City West goalie Mason West (33) dives on the puck in Saturday’s game against Rockford. West made 25 saves in a 6-4 win over the No. 5-ranked Rams. 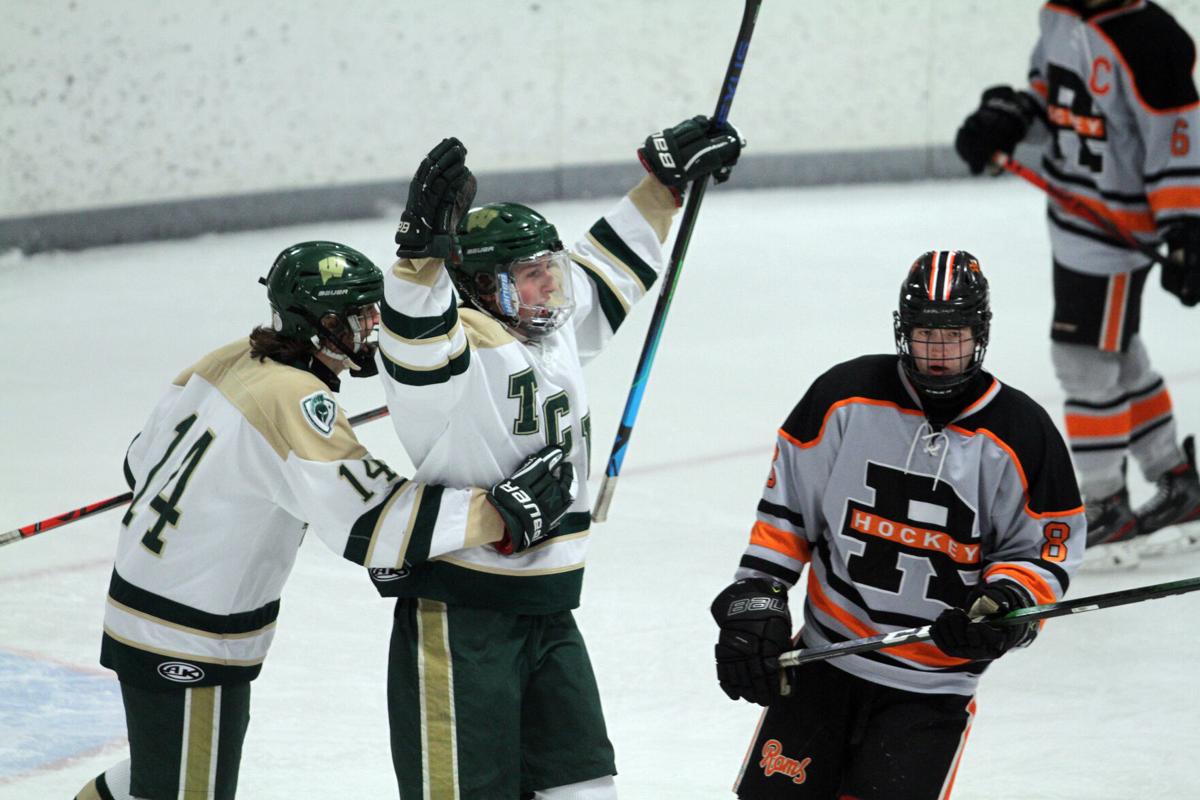 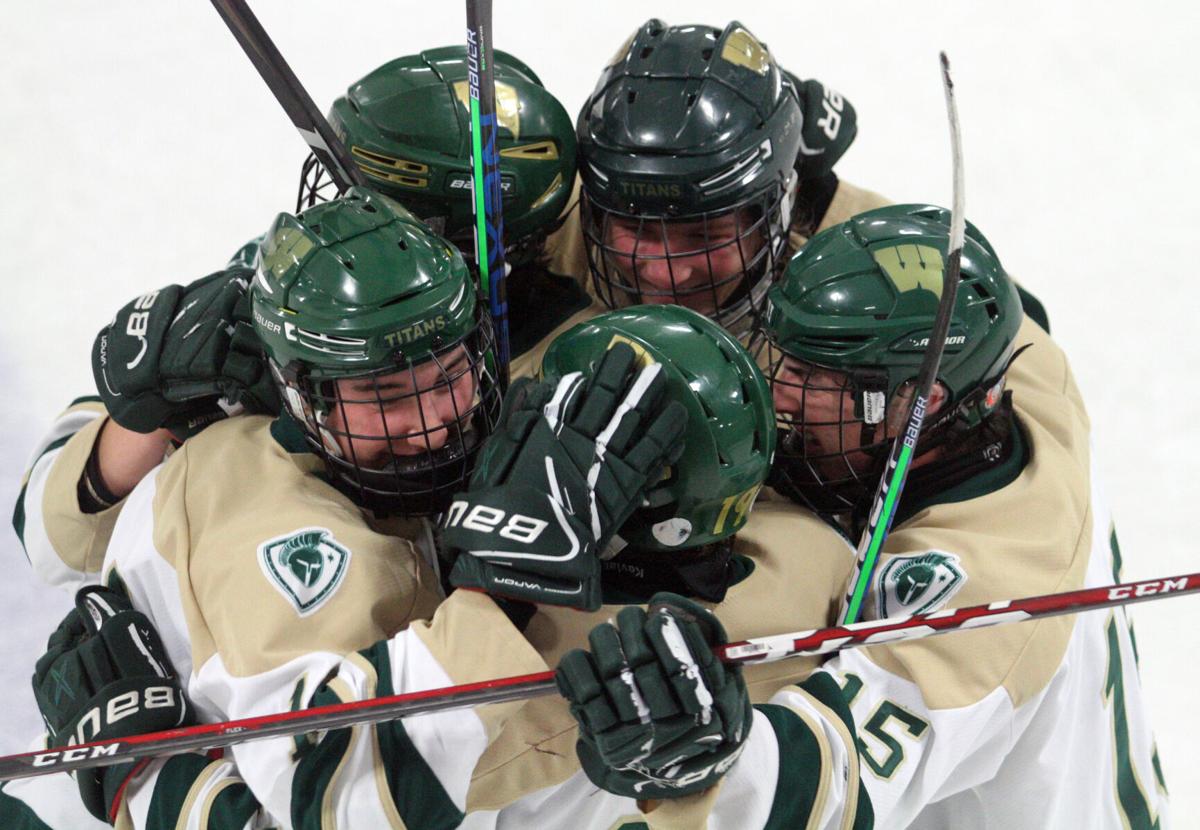 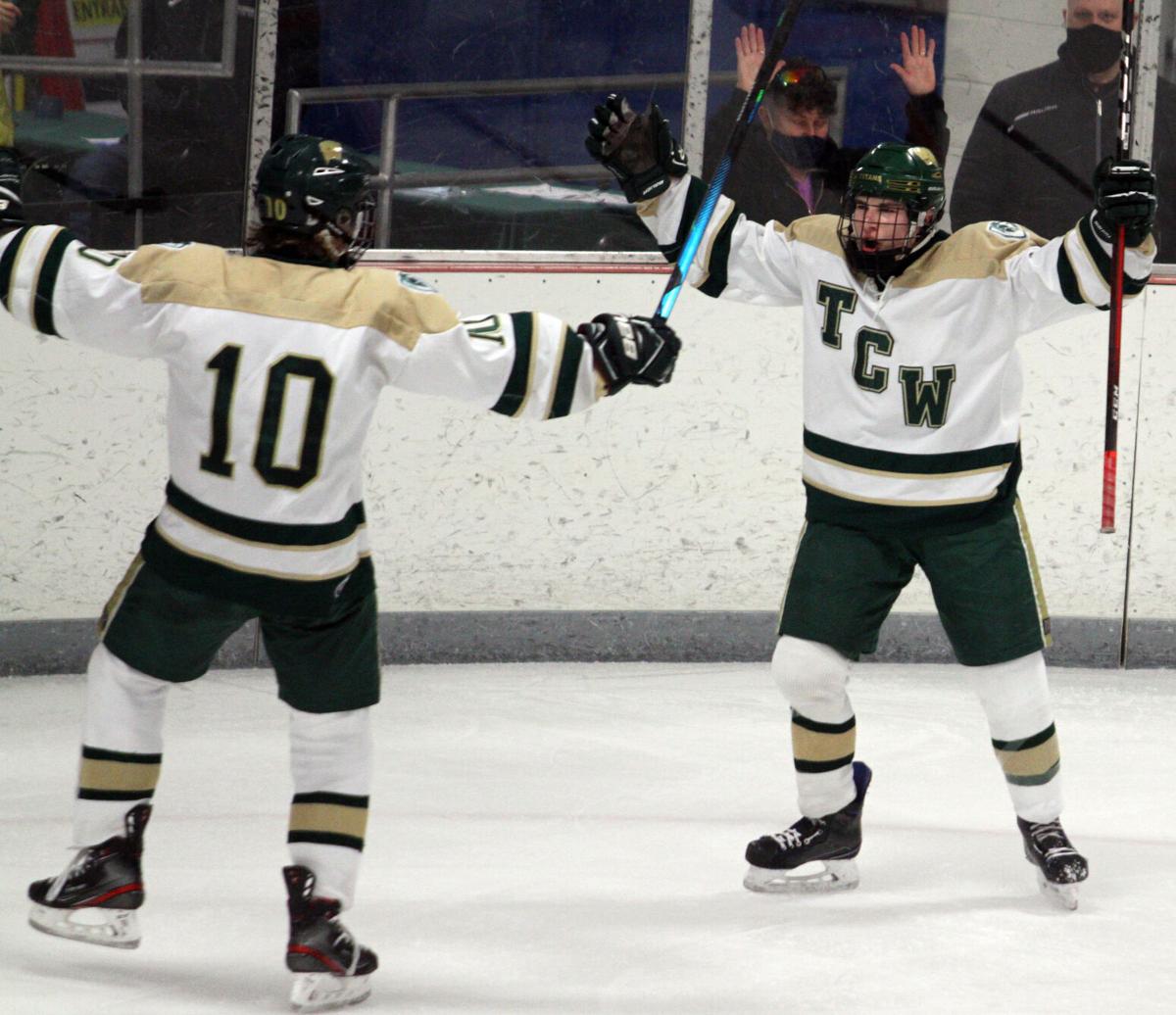 Traverse City West goalie Mason West (33) dives on the puck in Saturday’s game against Rockford. West made 25 saves in a 6-4 win over the No. 5-ranked Rams.

TRAVERSE CITY — One down, two to go.

Traverse City West hockey piled up an impressive 6-4 win over No. 5-ranked Rockford, leading 6-2 before the Rams scored two late goals in the waning moments of Saturday’s game at Howe Arena.

The victory kicks off a stretch of three games in as many days for the Titans. West travels Sunday to Big Rapids in the 2 p.m. “Battle for the Paddle” game for a traveling canoe paddle trophy that started when former West player Vincent Pietrangelo was an assistant with the Cardinals.

“Gotta drink a lot of water I guess, keep our legs ready,” said West defenseman Grant LaFaive, who had an assist in the win over Rockford. “But it’s exciting. After all the COVID stuff, I’m just happy playing, so I’m not going to complain about three games in a row. I’m happy about it.”

The condensed season caused by COVID-19 delays forced many teams to figure out how to play as many games as possible.

For West, it’s a rare Sunday game and three in a row. Traverse City Central has two Saturdays where it plays two games, much like Rockford, which came to Traverse City to face West in the morning and then the Bay Reps later that evening.

The Titans (3-1-1, 2-0-1 Big North) really got rolling Saturday with a four-goal second period, kicked off by Jacob Dean’s 4-on-4 score with an assist from blueliner Josh Reece 51 seconds into the stanza.

“Our defensemen are getting pucks to the net and you never know what’s gonna happen,” West head coach Jeremy Rintala said. “There were a few nice screens in front with some traffic and creates chances. That’s what we’re hoping for. We don’t create a ton off the rush, so we once we’re set up in the zone we need our D to get pucks to the net as much as possible.”

Tyler Esman’s shot from the left point found the twine with 5:01 left in the second, answered by the Rams’ Carson Korte two minutes later to forge a 2-2 tie. Reece and Simon McManus set up Esman’s goal.

West didn’t let the tie last long, with Murphy Kehoe putting the Titans back up 3-2 off LaFaive’s assist and Jack Burzynski extending the lead to 4-2 with a power-play goal with 35 ticks left in the second off a Michael Schermerhorn helper.

“I got it in the deep in our defensive zone,” LaFaive said. “I just did a little flip shot, worked out popped right up to our forward Murphy Kehoe for the breakaway and he put it home to take the lead.”

The Titan lead swelled when Aidan Rapin shot from the right point after a long West possession in Rockford’s zone wore down the Rams. Dean and Nick Martin picked up assists. Ryan Leslie’s goal with 7:18 remaining off a Gavin Hysell assist gave West a 6-2 lead.

“First period I felt like we started off pretty well,” Rintala said. “And then we got into some penalty trouble and obviously they took advantage of that, so we dug a little hole. But then second period we really woke up. I felt like that was maybe our best period of the year.”

Rockford came in having scored 29 goals in six games, and West kept the Rams well below that average.

Rockford scored two late goals in the final 3:03, catching West after a Rams penalty expired that resulted in an Owen Devries goal with 3:03 left and Korte completed his hat trick with 1:24 remaining.

“Guys just kind of took their foot off the pedal a little bit there and Rockford is a talented team,” Rintala said. “They’re going to make you pay if that if you do that.”

“We have a lot of seniors this year, and we’re all really excited going into the season,” LaFaive said. “I really think think it’s all coming together right now. That was a big game, big win right there. We just have to keep this momentum going forward. We’ve got Big Rapids tomorrow playing for the paddle, so that’s super exciting.”

Mason West made 25 saves in net for the Titans.

KINGSLEY — Evan Douglass drained a buzzer-beating 3-pointer to give Kingsley a 47-45 boys basketball victory over Frankfort.