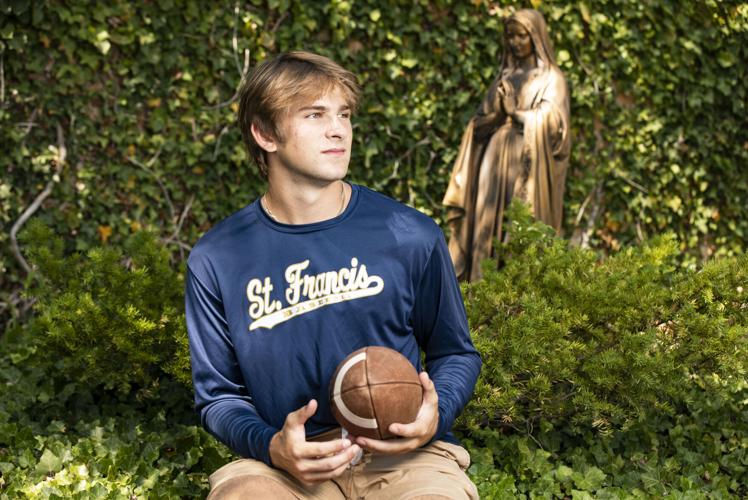 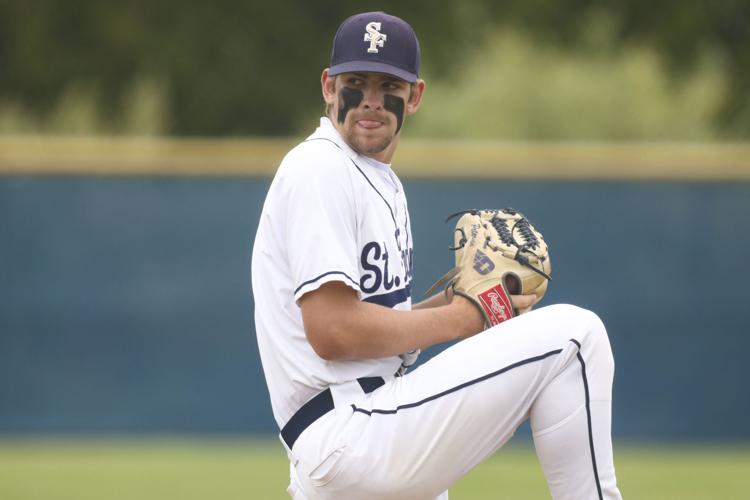 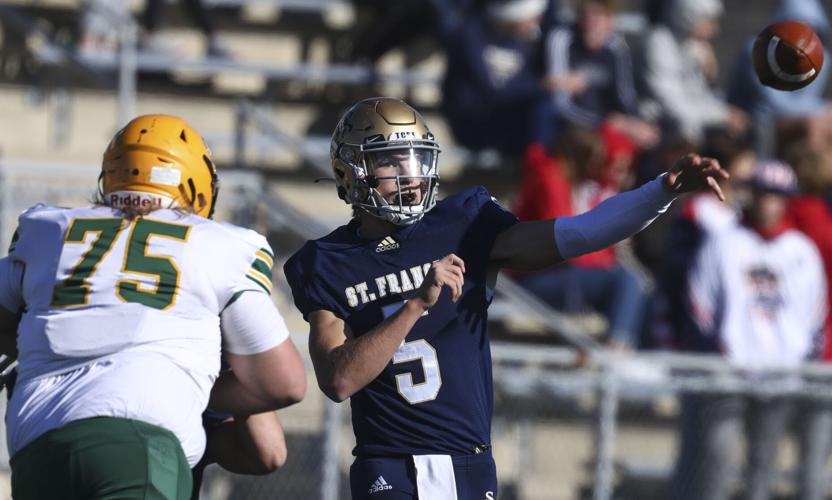 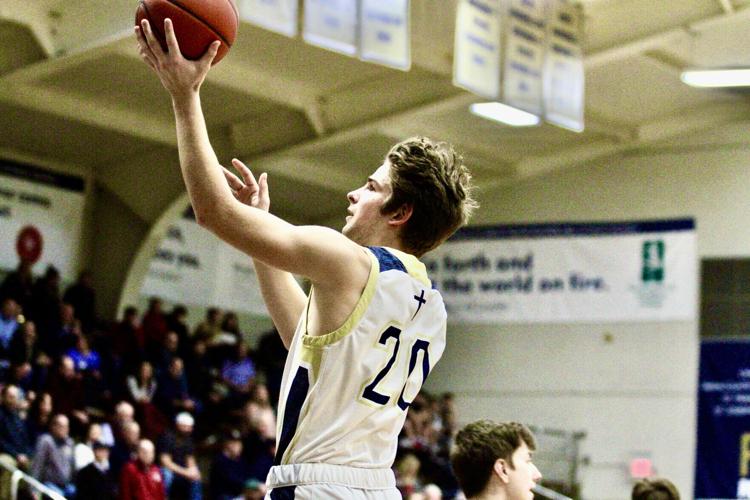 Traverse City St. Francis' Charlie Peterson goes to the hoop for a layup during the 2021-22 varsity basketball season. 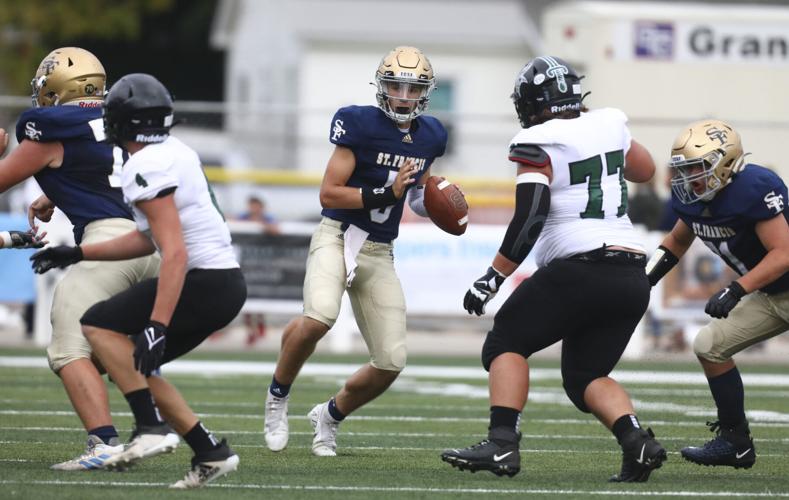 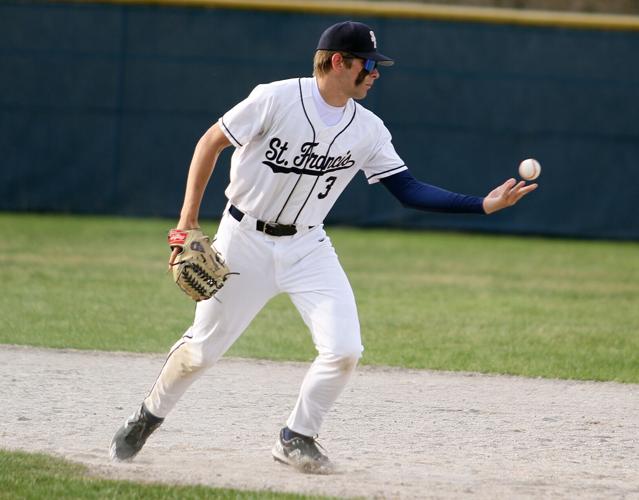 Traverse City St. Francis shortstop Charlie Peterson (3) tosses the ball to second for a force out against Harbor Springs during a game on May 5, 2022. 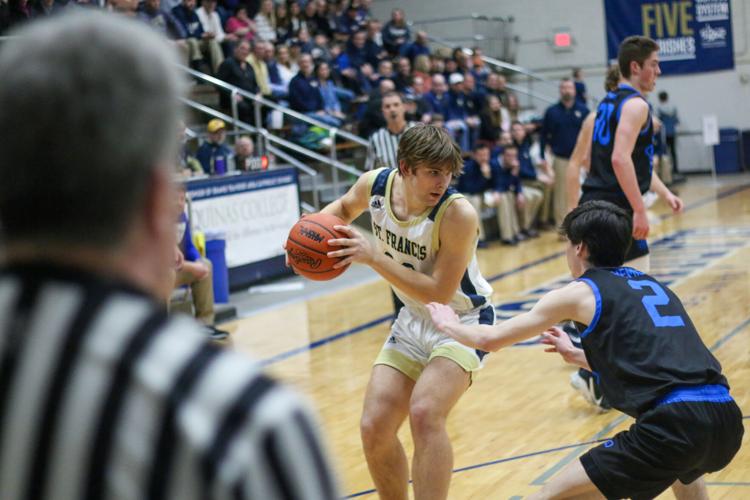 Traverse City St. Francis' Charlie Peterson (left) looks for a pass during a home game against Midland in March 2022. 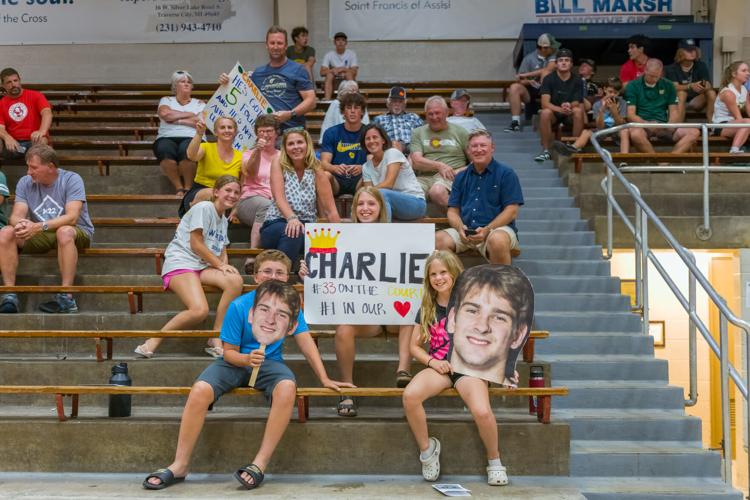 Family and friends of Traverse City St. Francis' Charlie Peterson pose for a photo during the 2022 Record-Eagle All-Star Basketball Summer Classic on July 20, 2022.

Traverse City St. Francis' Charlie Peterson goes to the hoop for a layup during the 2021-22 varsity basketball season.

Traverse City St. Francis shortstop Charlie Peterson (3) tosses the ball to second for a force out against Harbor Springs during a game on May 5, 2022.

Traverse City St. Francis' Charlie Peterson (left) looks for a pass during a home game against Midland in March 2022.

Family and friends of Traverse City St. Francis' Charlie Peterson pose for a photo during the 2022 Record-Eagle All-Star Basketball Summer Classic on July 20, 2022.

TRAVERSE CITY — One of Charlie Peterson’s earliest memories is straight out of pure Americana.

The recent Traverse City St. Francis graduate can still remember being just 3 years old and playing catch with his father in their backyard. Even then, the toddler had a cannon attached to his left arm.

“I was just hurting his hand when I was throwing,” Peterson fondly recalls with a laugh. “That’s when I knew I loved baseball.”

The seeds of Peterson’s passion for the national pastime likely were planted at an even younger age. The talented southpaw said the smooth white hide and raised red laces of a baseball was the first thing he ever held in his hands.

“That’s what it feels like anyway,” he said. “Baseball has always been my first love. I just go out there and everything else going on in my life just goes away.”

But Peterson’s athletic acuities are not limited to baseball. As a senior for the Gladiators, he excelled and set records as the starting quarterback for the football team and then dipped his toes back into the basketball waters after a two-year hiatus.

His successes on the gridiron, the hardwood and the diamond are why Peterson has earned the top honor as the 2021-22 Record-Eagle Male Athlete of the Year. Traverse City Central’s Julia Flynn was named the Female Athlete of the Year after winning Runner of Year honors in cross country and track and field.

“I just love the aspect of sports of ‘We have our guy. You have your guy. Let’s see who’s better,’” Peterson said. “I love being a part of that and getting a chance to prove myself. It’s awesome, and I never get tired of it.”

That drive to win and competitive nature was ingrained in his personality from a young age as the little brother to twins Casey and Cooper Peterson, who also experienced their fair share of athletic success at St. Francis.

From making clothes into the laundry hamper to running up the stairs, everything was a competition between Charlie and his two older brothers. That is something the three-sport athlete cherishes as he’s grown older.

“They’ve had such an impact on my life in so many meaningful ways,” Peterson said. “Growing up, it felt like I was competing against them every day. Now, I realize it’s us against everyone else. That’s brought us closer together, and they’ve been there for me every step of the way.”

That is what made Peterson the “one more game” guy and the “run it back” guy.

“If you asked anyone in my family or anyone I know, they’ll probably tell you that I’m the most competitive person they know,” he said. “I love to compete, and I love to win. Going here to (St. Francis) gave me the chance to do that a lot.”

Peterson’s competitive motor is always going. He thought about dropping a few sports in eighth grade to focus on either football or baseball, but he realized he didn’t have to restrict himself to just one. Peterson saw the benefits that playing football had on his basketball and baseball skills, how playing basketball helped his speed in football and baseball, and how baseball strengthened him mentally in all he does.

“It’s all connected,” he said. “I’m just glad I played as many sports as I could. I feel like I was able to get the most out of my high school experience, and that’s what I’m happiest about.”

Peterson began his final year with St. Francis setting records as quarterback for the varsity football team with 1,876 passing yards and 22 passing touchdowns while only throwing two interceptions. He also ran for four more touchdowns and caught one as well as Peterson earned First-Team All-State honors from both the Associated Press and the Michigan Football Coaches Association.

“Ever since I was this tall,” Peterson said, gesturing about 3 feet high, “I wanted to be the quarterback for the Gladiators. That’s all I ever wanted to be growing up. I’m glad I got to achieve that and do it at a high level.”

Peterson was also happy to leave his mark on the program, and he credited his teammates with helping him do that.

“We kind of changed things offensively, and it worked really well,” he said. “I had good numbers, but a lot of that is credited to my teammates. Those guys were unreal and made me look really good.”

“I don’t think he was as confident in his abilities under center as a junior. The game slowed down for him quite a bit in his senior year,” Sellers said. “When he threw the ball, he threw it with confidence.”

Peterson agreed, adding that the jump mentally from his junior to senior year was “enormous.” He said he’d never been more relaxed on a football field than during his senior year.

“When I was a junior, every time a pass play was called, I would start to stress out just thinking I have to prove myself every single play,” he said. “I came in senior year and was a little more established and so much more relaxed. It felt like the game was moving in slow motion.”

Sellers had the trust in Peterson to take a St. Francis program that had historically and predominantly been a run-first team to one that opened up the passing game.

“There’s a reason we got to the finals two years ago and the semifinals this year, and a lot of that had to do with him,” Sellers said of Peterson.

Sellers credited much of that to the environment in which Peterson grew up and Peterson’s knack for learning and then putting that knowledge into practice.

“He is consistently positive and upbeat,” Sellers said. “He always has an attitude that it can be done. He’s a very intelligent young man. I’d call him worldly and wise beyond his years. He’s a person you’re drawn to and want to be around.”

Much of that draw comes from Peterson’s lighthearted personality.

“He brought a lot of fun and excitement and good energy to practice in ways we haven’t had,” Finnegan said. “It was fun having Charlie around. He had jokes and different sayings and kept it light. He’s a funny, witty kid.”

Although Peterson is a fiery competitor, he knows the point of playing a game is also to have a good time.

“I like to have a ton of fun when I’m playing sports,” Peterson said. “It’s always been an outlet for me, in that regard. I take it seriously and do my best to impact winning, but I still think you can have fun at all times.”

And what better way to have fun than to play a game with your friends? That’s what brought Peterson back to basketball his senior year, answering the call from Adam Gerberding to return to the hardwood for his final go-round.

“I’ve always loved to compete, and basketball was another outlet to do that,” Peterson said. “In those two years that I took off basketball, it just felt like there was a void. I was just always chomping at the bit for baseball because I hadn’t competed against anyone right across from me for so long.”

Although Peterson did not play basketball as a sophomore or junior, Finnegan said he fit right in as a senior.

“He gelled with the team and took on a big role as a senior,” he said. “He’s a good teammate, always cheering on the guys and happy when they do well. He’s a team-first guy and wanted to win and be successful, but he didn’t care about his own stats. He wanted the best for the team.”

Peterson helped the Glads go undefeated in the Lake Michigan Conference and finish the season with a 19-3 record, with their only regular-season losses coming to Division 1 teams. Finnegan said there were some learning curves for Peterson in terms of basketball Xs and Os, but the senior picked them up quickly.

“He was very impressive,” Finnegan said. “About halfway through the season, he finally went up and dunked one two-handed and was like, ‘Man, that was pretty easy.’ We said, ‘Yeah, we want you to keep doing that. Go up there, put it down, be aggressive.’ He did things at times that your jaw would drop because he’d elevate and make it look easy.”

Peterson wrapped his high school athletic career with another selection to the First-Team All-State squad, this time from the Michigan High School Baseball Coaches Association as a pitcher. The southpaw won a school record 14 games, going 14-2 in 19 games pitched, tossing 76 innings with a 0.73 ERA (just eight earned runs) with a paltry 0.69 WHIP (36 hits allowed, 17 walks). He also struck out 117 batters.

Peterson helped the Gladiators to conference, district and regional championships before St. Francis lost in the state quarterfinals to Standish-Sterling.

“Charlie had a fantastic season for us,” St. Francis baseball head coach Tom Passinault said. “His statistical numbers are incredible.”

Peterson was great at the plate, too. He hit for better than a .500 average and was consistently clutch, batting .533 with runners in scoring position. His leadership as a senior was invaluable, Passinault said, as he helped lead a young team with three freshman starters.

Peterson took great pride in helping the younger players, doing his best to pass along his knowledge of the game to the next generation of Gladiators.

“I’d tell them, ‘Just relax. It’s not the end of the world. There’s always a lot of game left,’” Peterson said. “Those guys just grew up in two weeks into players you know are going to be really good.”

Peterson will go from mentoring freshmen to being a freshman himself when he joins the baseball team at Kalamazoo College, where the recent high school graduate has committed to play.

“I’m never more calm than when I’m on a baseball field, so the chance to do that for four more years is really a blessing,” he said.

Being a Traverse City St. Francis Gladiator was also a blessing.

“I’m super grateful for all of my teammates. I loved playing with all of them. And I’m so grateful to my family for allowing me to come here,” Peterson said. “This wasn’t a guarantee. It could have been taken away at any moment, but I ended up finishing my career here, and I’m just super happy with how it turned out.”