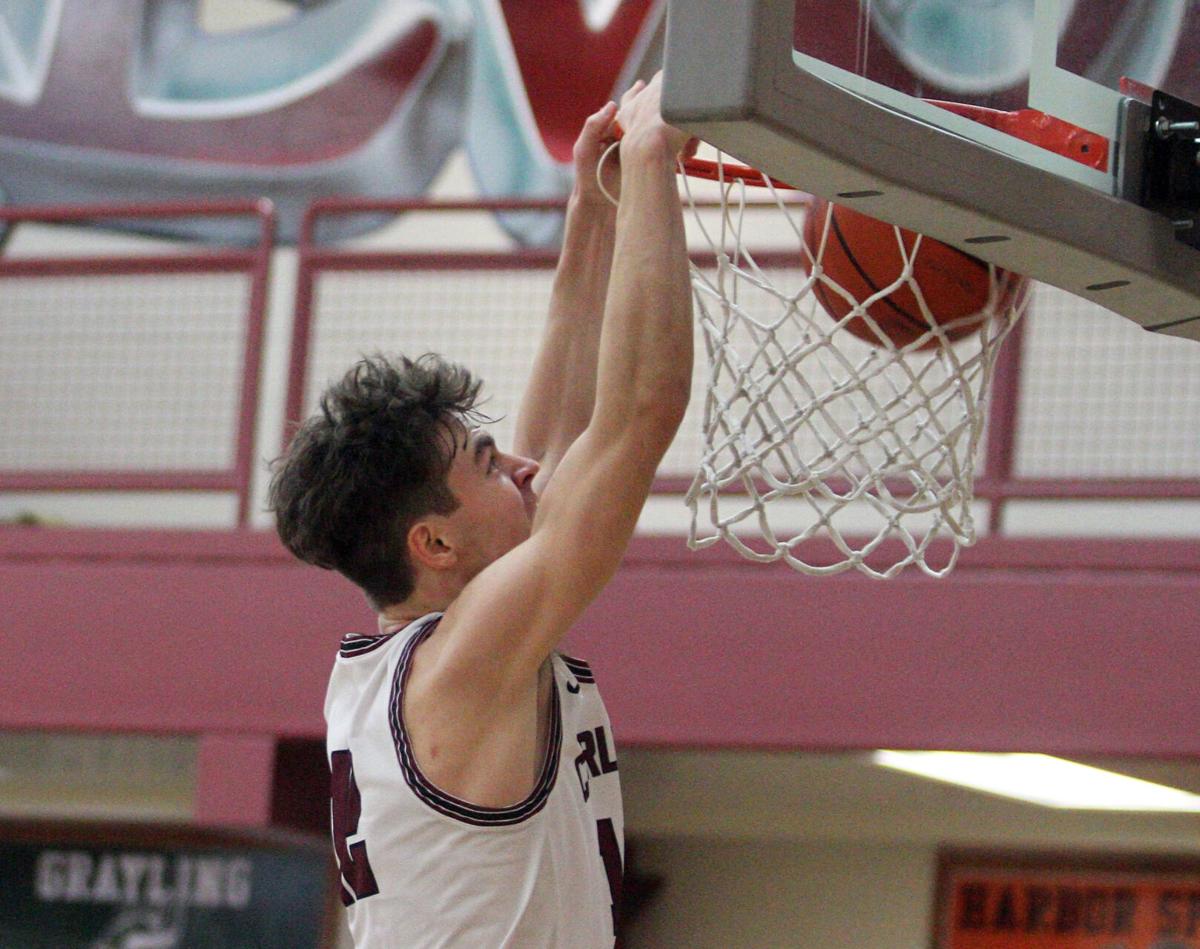 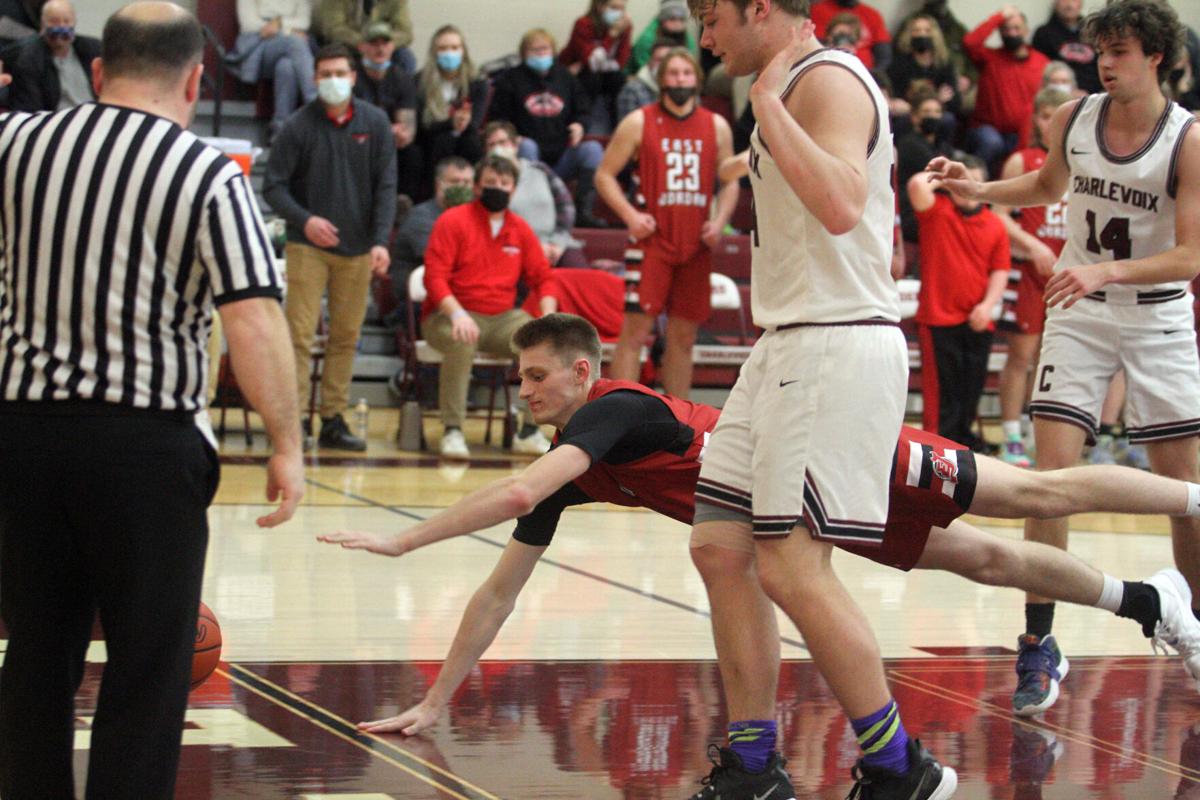 East Jordan’s Preston Malpass dives after the ball as it goes out of bounds Tuesday against Charlevoix. 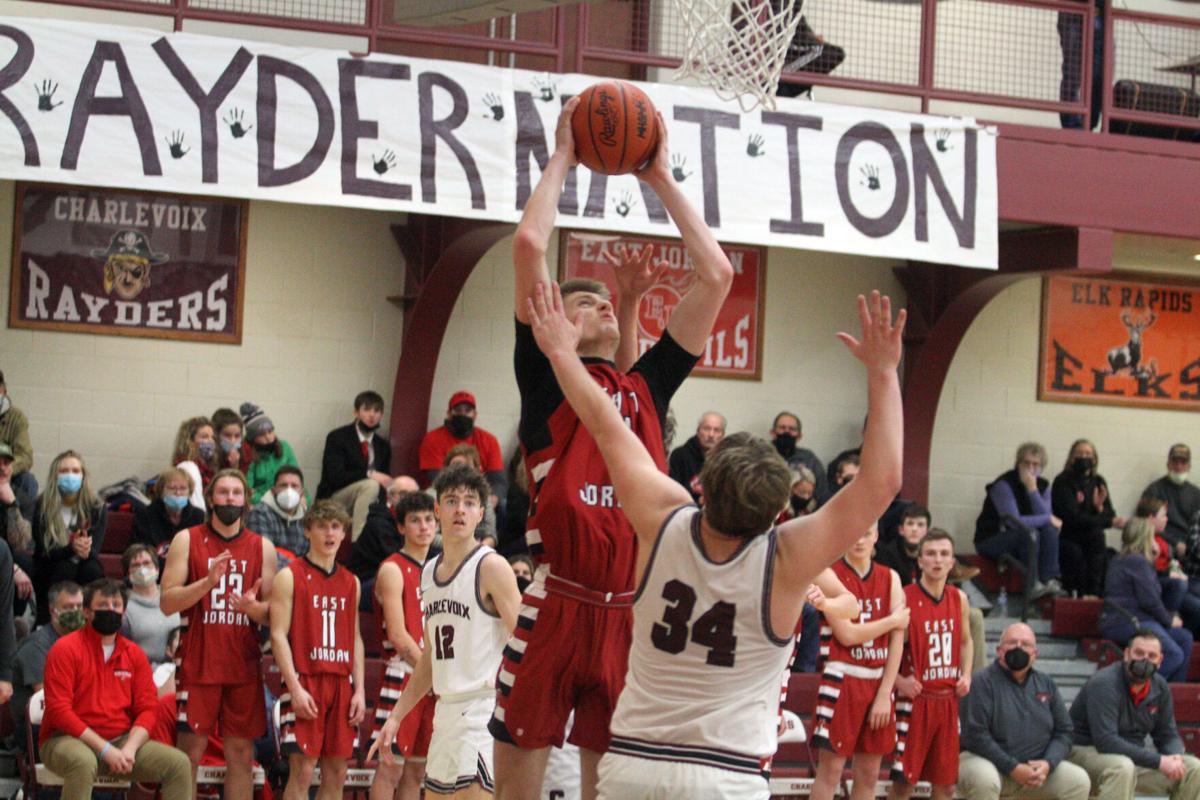 East Jordan’s Preston Malpass goes up for a dunk in Tuesday’s game against Charlevoix.

East Jordan’s Preston Malpass dives after the ball as it goes out of bounds Tuesday against Charlevoix.

East Jordan’s Preston Malpass goes up for a dunk in Tuesday’s game against Charlevoix.

The star 6-foot-3 Charlevoix guard accomplished a lot already in his career: well north of a thousand career points, Dream Team multiple times, and a lot of wins.

Now he can add a slam dunk to that résumé.

Solomon threw down for the first time in game action on a two-hander with 24 seconds left in Tuesday’s varsity boys basketball game, sealing a 55-51 victory over rival East Jordan.

Solomon let out a big yell as he came back to Earth from the inaugural dunk.

“I was definitely excited,” Solomon said. “That’s something that I’ve been trying to do for a while. It felt good.”

East Jordan clawed back from a nine-point deficit to come within four on a JJ Weber bucket before Solomon’s dunk.

“I got a couple in practice before,” Solomon said of dunking. “I never really had the idea to try it in a game, but it felt good. I’ve been throwing down easy in practice, and it just felt like the right time.”

The win keeps the Rayders (5-2, 1-2 Lake Michigan Conference) in striking distance in the very competitive LMC, winning their fourth in a row since a 1-2 start. East Jordan falls to 3-2, 0-2 LMC. Traverse City St. Francis, Elk Rapids and Boyne City are all undefeated in a league race with a lot of games remaining.

“I was proud of our kids’ effort,” Dzwik said. “We had good energy. Playing in Charlevoix is tough. Evan and Caleb are beasts, and the scorebook shows that.”

Charlevoix led 30-24 at the break, but the Devils rallied to take a brief 33-32 lead on a Mason Malpass bucket off a Devon Olstrom assist not quite midway through the third. The lead was the team’s first since a Weber bucket to kick off the second quarter. The Rayders answered quickly with a Stuck putback 25 seconds later and never trailed again over the final 10:57.

“Every time against East Jordan, it seems like it like we just we grind it out with them,” Charlevoix head coach Matt Stuck said. “It’s never pretty basketball. Those kids have competed against each other for so long that they just know each other.”

Preston Malpass led East Jordan with 12 points, including a dunk of his own to open the second-half scoring. He played through a broken right pinky finger that he injured in the fourth quarter. Carter Sherman pitched in eight points, and Mason Malpass and Weber seven each.

Stuck scored 16 in the first half, with Solomon adding 10. Only Jack Gaffney scored in the first half outside of those two, hitting two buckets. Stuck scored eight in a row after Weber’s basket gave the Red Devils a 15-14 lead early in the second quarter. A Solomon three-point play with 3:47 left before halftime resulted in the game’s only double-digit lead at 25-15 before a 7-0 East Jordan run that included a Mason Malpass 3-pointer sandwiched in between buckets by his brother and Granger Kitson.

“I feel like one of the main things was trying to contain their best players, Stuck and Solomon,” Preston Malpass said. “They’re both very good players, and we had a little bit of trouble with Stuck on the perimeter knocking down shots and Evan was getting in the lane pretty easily. They played a good all-around game, and they were hard to stop.”

TRAVERSE CITY — A star hangs above the backyard rink at the Deneweth household. The star has…

HARBOR SPRINGS — The defending state champions showed that they are hungry for more.