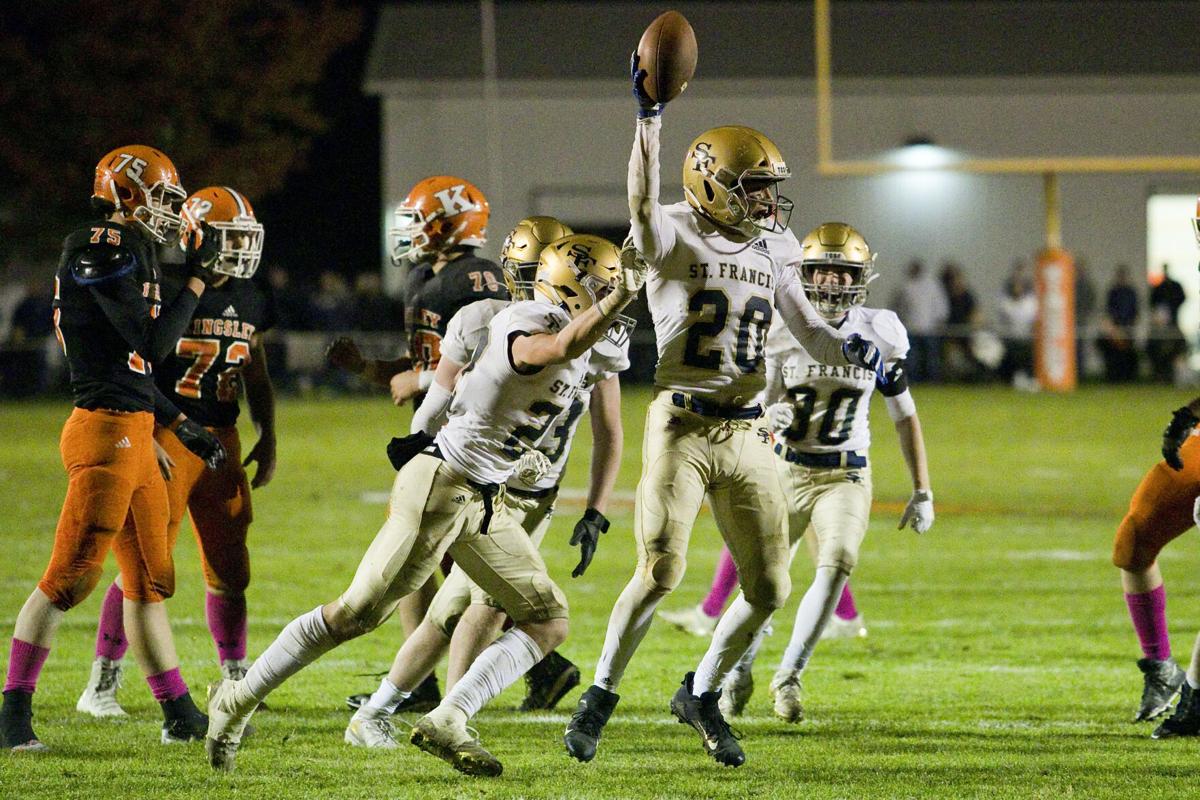 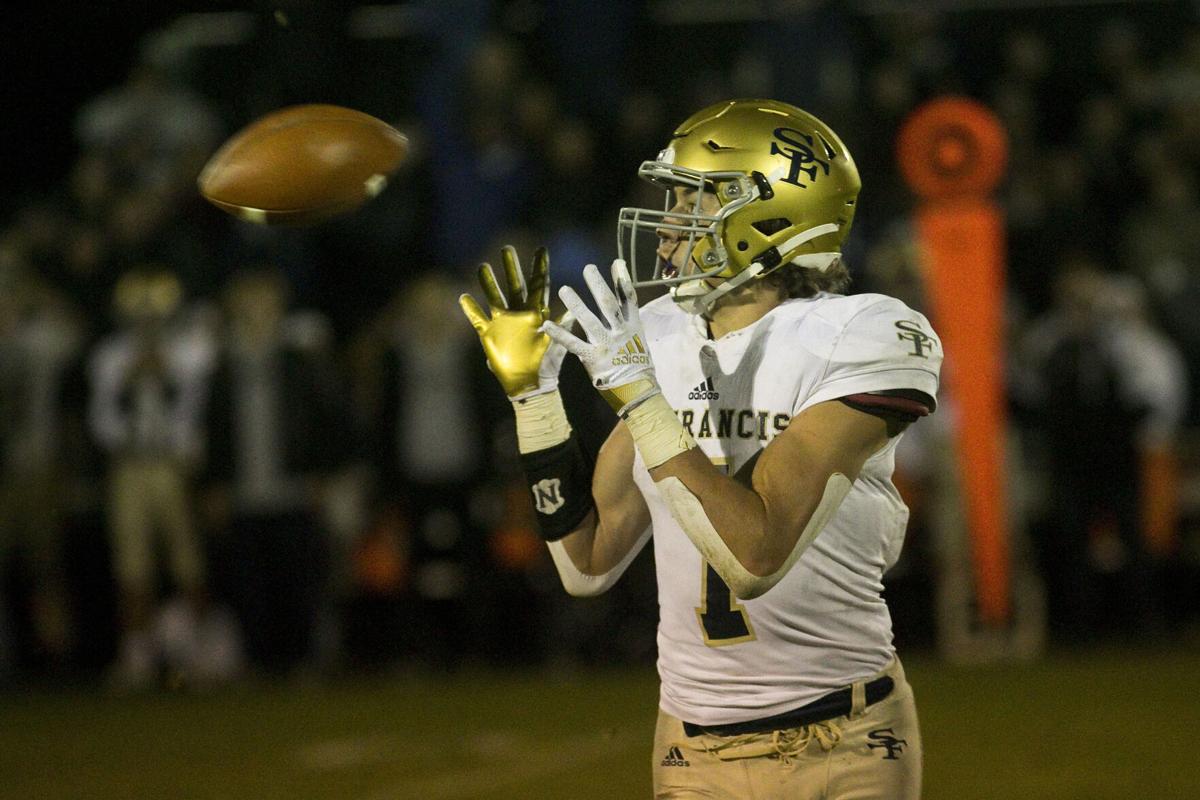 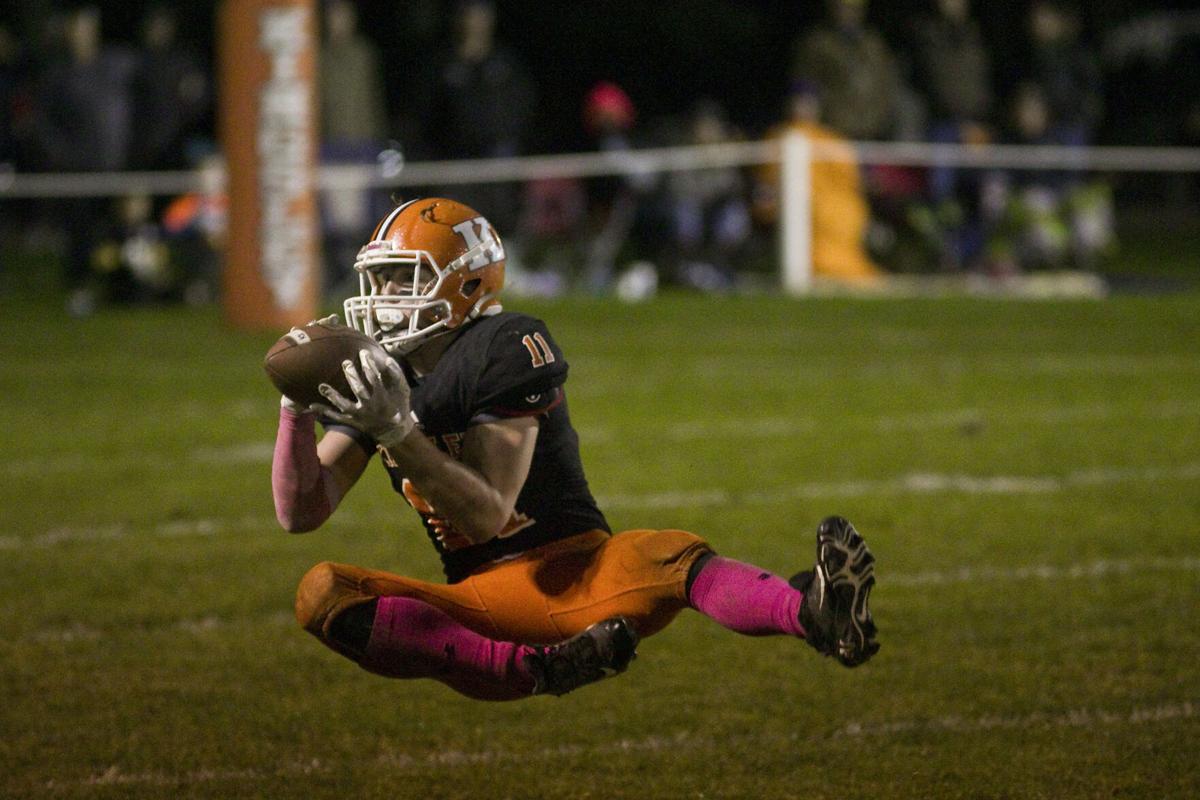 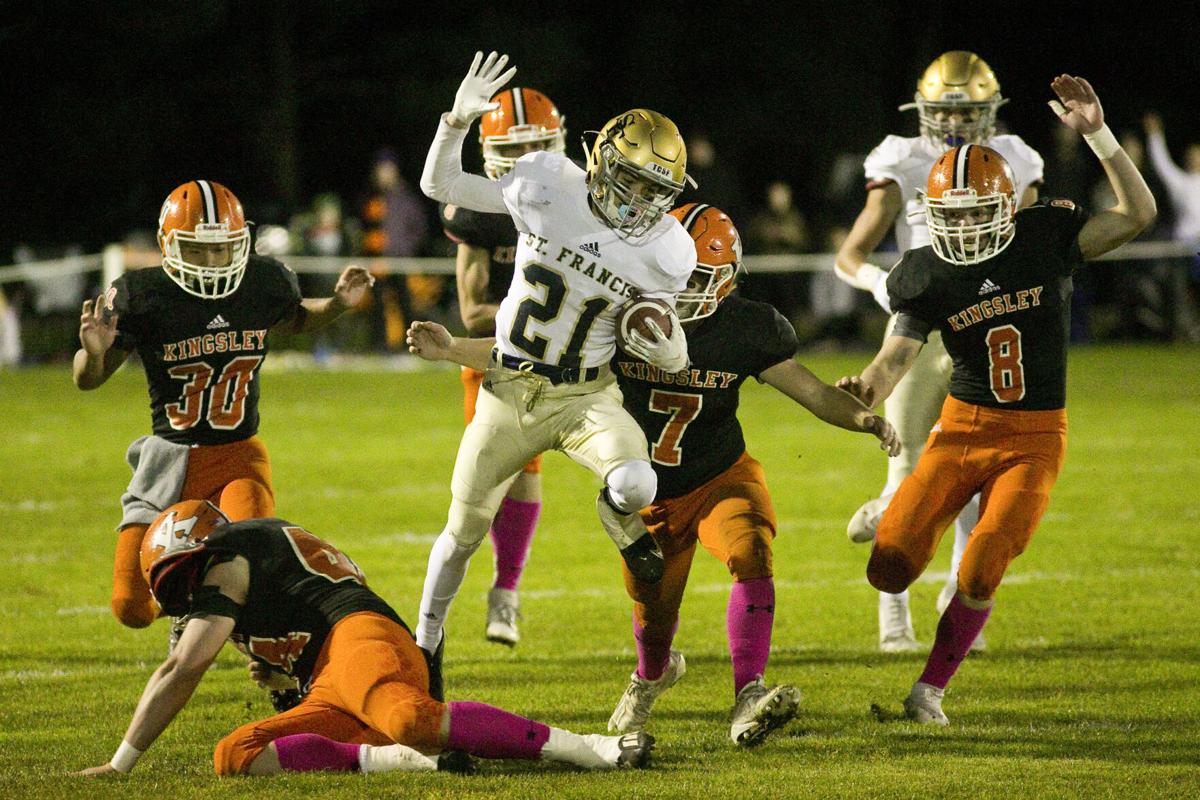 Traverse City St. Francis’ Joe Andrews (21) tries to break a tackle by Kingsley’s Riley Inthisone (7) in the first half of Friday’s game at Rodes Field. 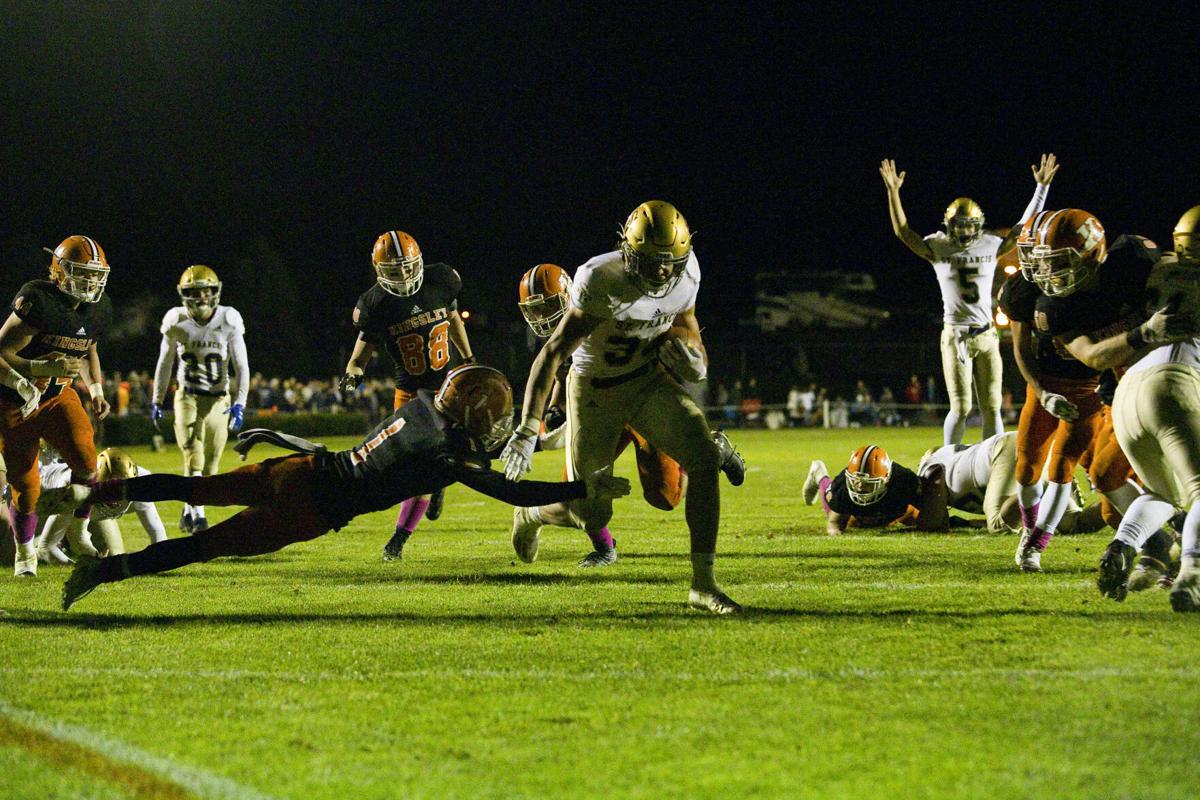 Traverse City St. Francis' Garrett Hathaway (33) runs past Kingsley's Phillip Brown (1) for a touchdown in the first half of Friday's game at Rodes Field. 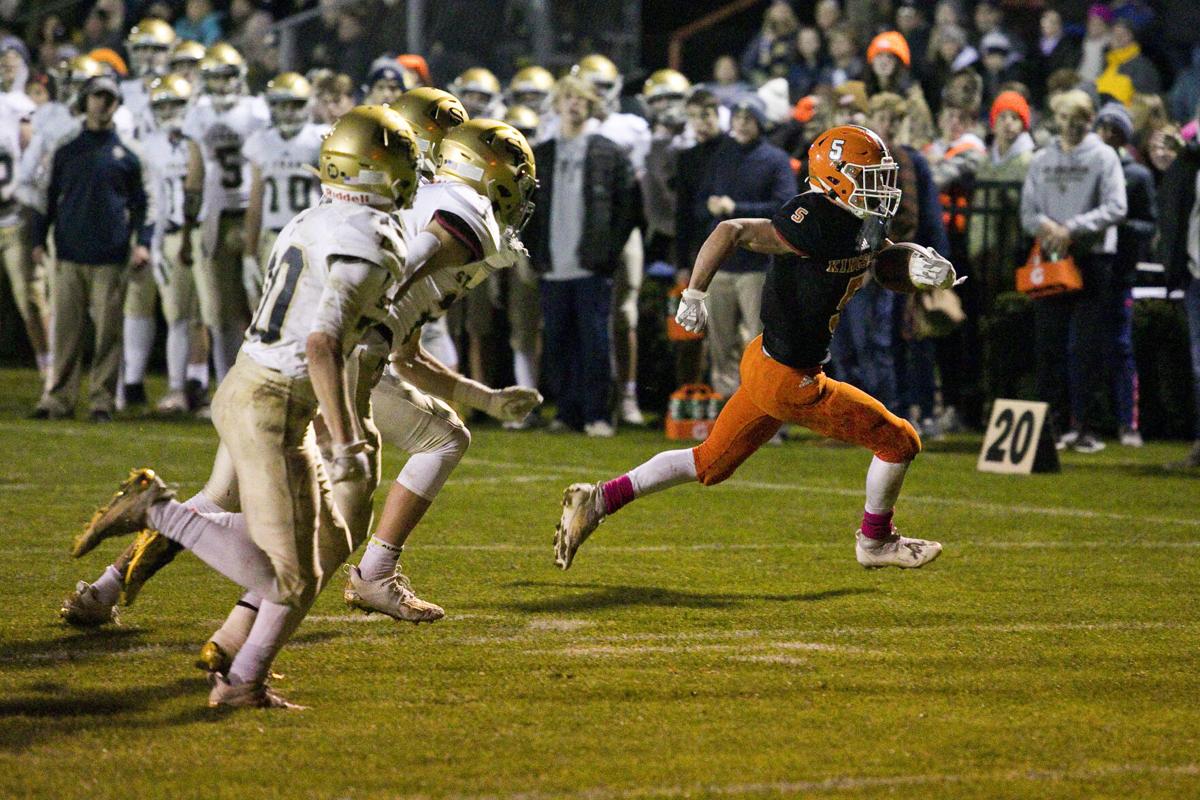 Kingsley's Aidan Shier (5) outruns Traverse City St. Francis defenders for a touchdown in the first half of Friday's game at Rodes Field. 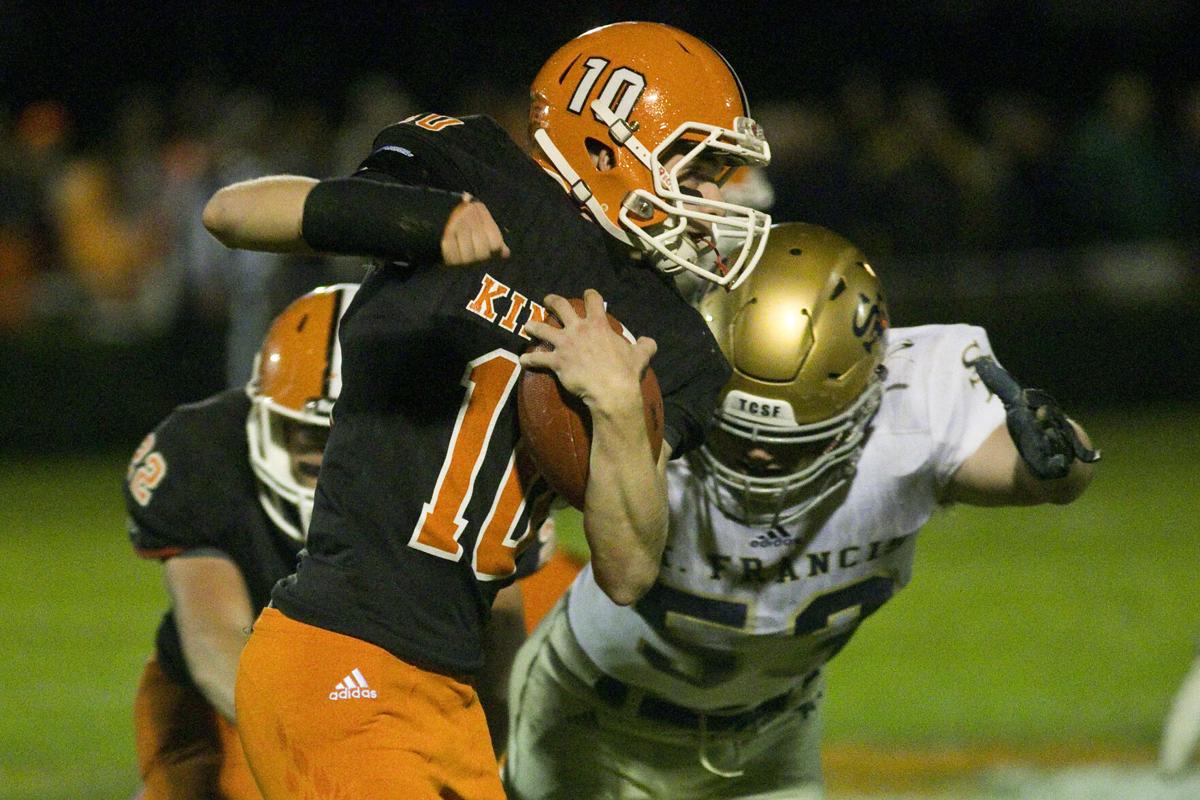 Kingsley's Evan Douglass (10) tries to avoid a tackle by Traverse City St. Francis' Jacob Grozenski (53) in the first half of Friday's game at Rodes Field. 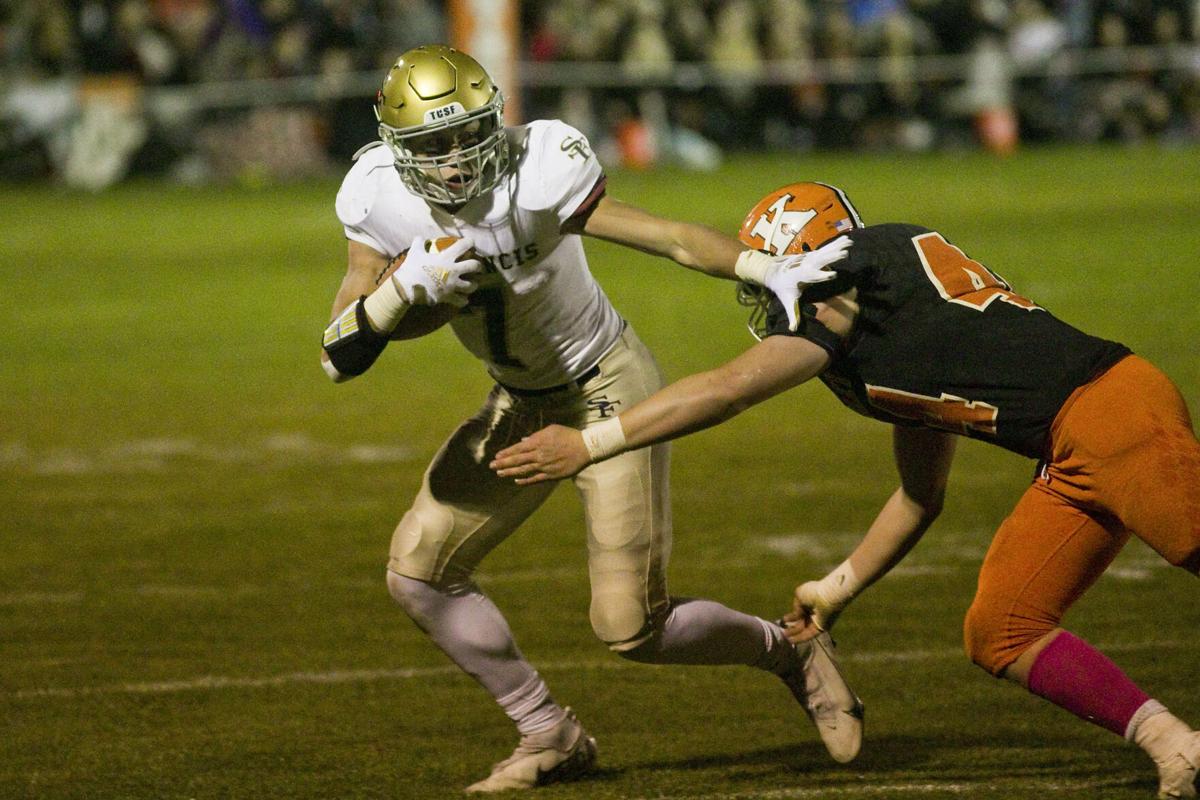 Traverse City St. Francis' Wyatt Nausadis (7) tries to break a tackle by Kingsley's Brett Peterson (44) in the first half of Friday's game at Rodes Field. 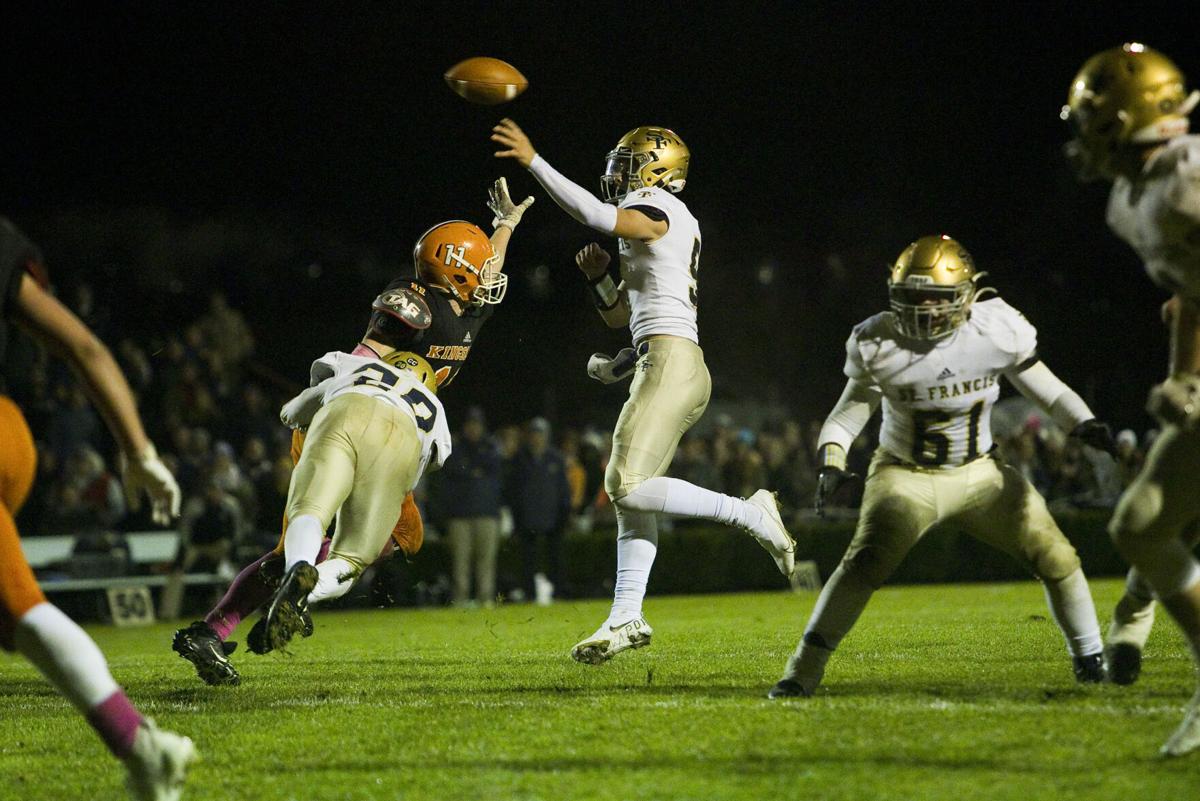 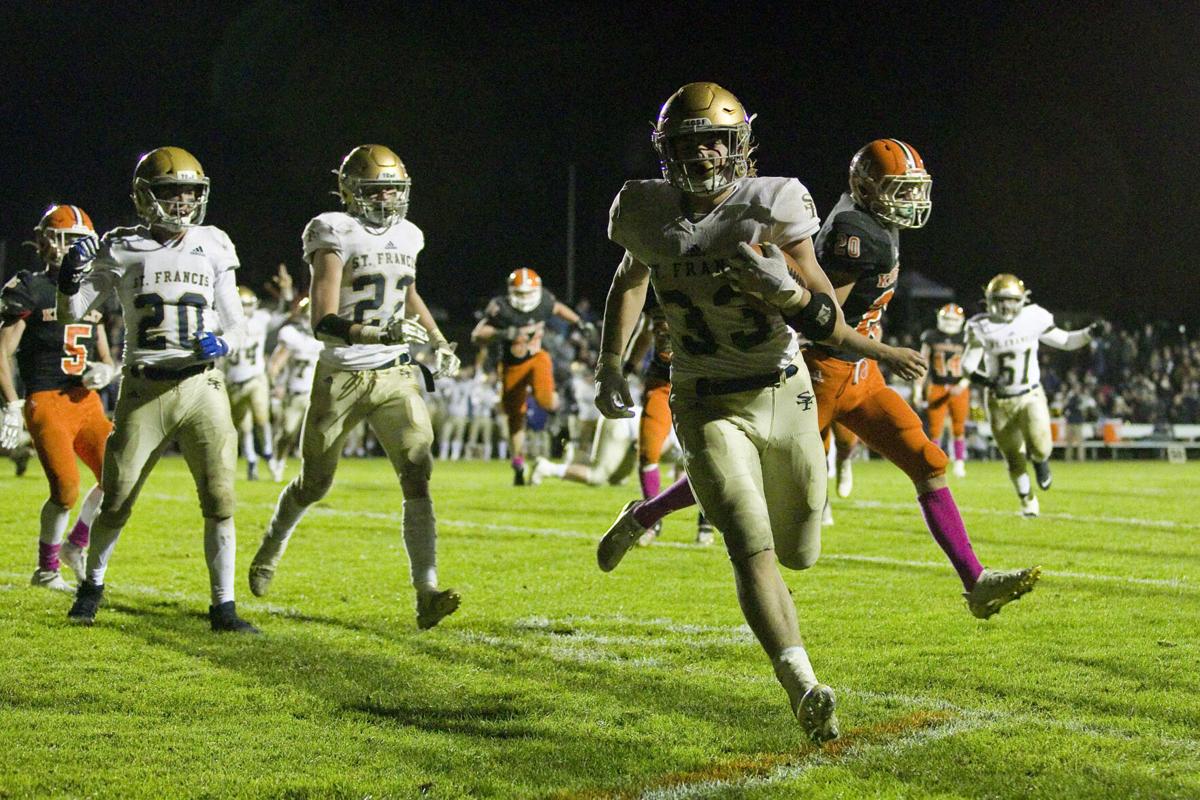 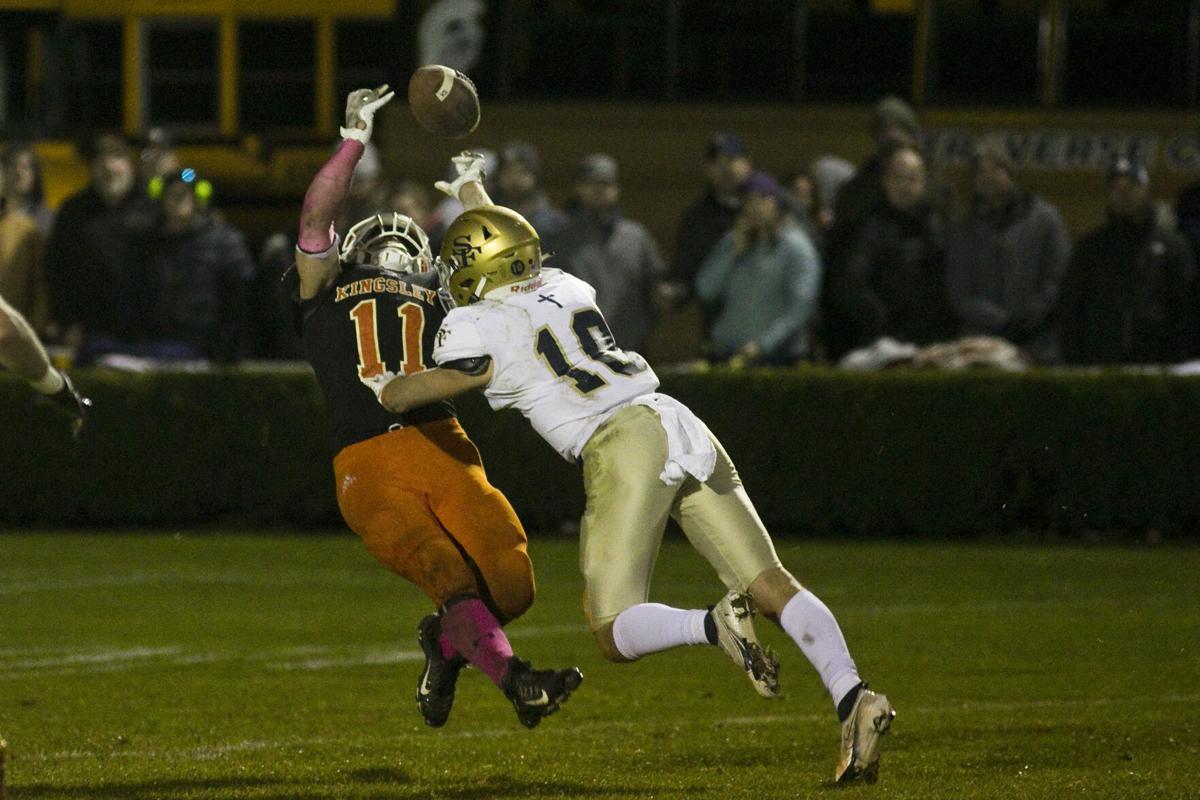 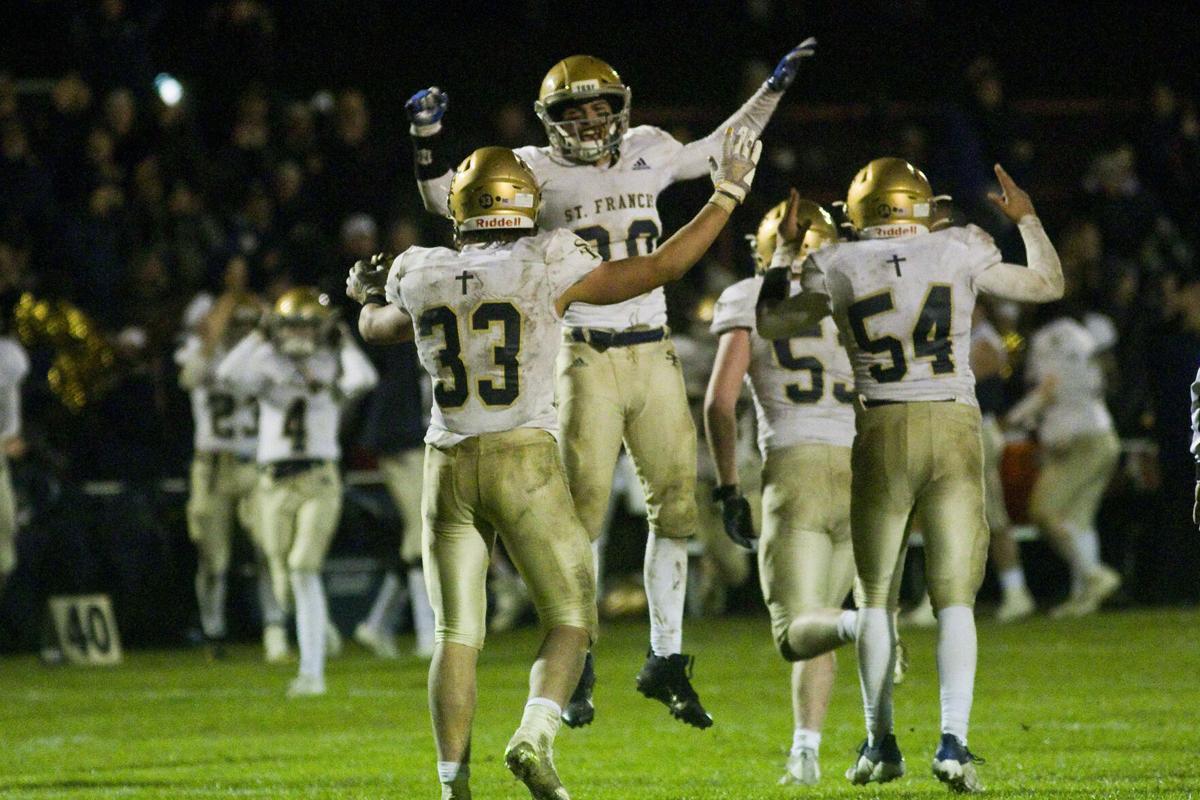 Traverse City St. Francis’ Joe Andrews (21) tries to break a tackle by Kingsley’s Riley Inthisone (7) in the first half of Friday’s game at Rodes Field.

Traverse City St. Francis' Garrett Hathaway (33) runs past Kingsley's Phillip Brown (1) for a touchdown in the first half of Friday's game at Rodes Field.

Kingsley's Aidan Shier (5) outruns Traverse City St. Francis defenders for a touchdown in the first half of Friday's game at Rodes Field.

Kingsley's Evan Douglass (10) tries to avoid a tackle by Traverse City St. Francis' Jacob Grozenski (53) in the first half of Friday's game at Rodes Field.

Traverse City St. Francis' Wyatt Nausadis (7) tries to break a tackle by Kingsley's Brett Peterson (44) in the first half of Friday's game at Rodes Field.

No. 3-ranked Kingsley showed why it’ll be a tough out in the Division 5 playoffs.

The two traded punches in Friday’s Northern Michigan Football Conference Legends Division football game at Rodes Field in Kingsley before the Gladiators (9-0, 7-0 NMFC-Legends) pulled out a 38-30 victory to clinch their first undefeated regular season and Legends championship since 2018 in one fell swoop.

“This this is huuuuuge,” Gladiators senior running back Gabe Olivier said, drawing that last word out for emphasis. “We got the conference back. We beat Kingsley. Oh my gosh, this is awesome.”

Next destination: The state finals, where the Glads look to avenge their Division 7 finals loss to New Lothrop.

The Stags, many wearing “Trina Tough” black hoodies to honor the mother of Stags’ running back Connor Schueller who passed away Thursday from COVID-19, raised $10,362 during the game to help the family with medical expenses.

“It’s not easy,” Stags center Riley Brock said. “You just get hit like that and just have to push through it. If you knew Trina, she’d want us to come out here and play tonight, and that’s what we decided as a team to play. We all gave it our all tonight for her, because she loves this community, and we love her.”

Radio station FM-104.5, which broadcasts Kingsley football games, also donated the money it made from Friday’s broadcast to a gofundme campaign to help the family.

“She’s just a great person,” said 104.5 play-by-play man Tim Lueck, a neighbor of the Schuellers. “She’s got the cutest dimple smile. She’s stubborn, but it was in an endearing way.”

On the field, Connor played through an emotional game, making a big stop on 4th-and-1 with a tackle for a 4-yard loss to force a turnover on downs. Thirteen plays later, the rumbling Kingsley offense punched in its second score on an Aidan Shier 5-yard rush and conversion pass from Gage Hessem to Alex Smith for a 16-0 lead one play into the second quarter.

St. Francis fumbled the opening kickoff, and the Stags took quick advantage of a short field to score in three plays on a 4-yard True Beeman run. Hessem threw to Brett Peterson for the conversion.

“I don’t really think we panicked,” St. Francis quarterback Charlie Peterson said. “I got in the huddle when we went down 16-0, and I’m like, ‘Alright guys, take a deep breath, look at the clock. We’ve got three quarters; we’re gonna be fine.’ And the defense buckled down and the offense kept doing what we’ve been doing all year, and it turned out really good for us.”

Kingsley also forced Peterson to play the whole game for the first time this season.

St. Francis answered the 16-0 deficit with a nine-play drive culminated by a Garrett Hathaway 9-yard TD run and conversion pass to John Hagelstein.

“If we don’t go down and score, it’s a whole different ballgame and Kingsley just rolls,” Sellers said. “But our kids stuck to the game plan and executed the game plan.”

Hathaway, starting in place of injured Joey Donahue at fullback, caught three passes for 30 yards and a TD and ran seven times for 21 yards and a score.

“That doesn’t surprise me because Garrett has been having an insane year all year,” Peterson said. “He finds a way to make plays. He played a great game.”

Wyatt Nausadis ran for 45 yards and caught four passes for 157 yards, including a crucial 80-yard run-and-catch that helped turn the tide.

Evan Douglass’ long kick return gave the Stags a short field, and a long Shier run looked like it set Kingsley up inside the 1-yard line, but a holding penalty set the Stags back and Olivier intercepted a pass on the next play. Nausadis’ 80-yard jaunt came one play later. Luke Bigger ran in the conversion to knot the game at 16 each.

“We talk to our kids all season long and say, ‘We’ll be OK as long as we don’t beat ourselves,’” Kingsley head coach Tim Wooer said. “It was a combination of two things, playing a really good football team and us beating ourselves.”

Kingsley started the second half with a long Phillip Brown kick return to set up a drive that ended with a 33-yard Beeman TD run on a Statue of Liberty play. Bigger intercepted the conversion pass to keep the Glads in the lead, 24-22.

Kingsley pulled within a score on Sam Goethals’ 6-yard TD run and an Eli Graves conversion catch from Hessem with 6:11 left.

Kingsley advanced to the Gladiators 26 in the final minute before a pass over the middle to Goethals led to the clock running out.

“They’re really good,” Peterson said. “They’re a great team. They’re great with their fakes. They’re fast. They stay low, they do everything a Wing-T team should, and they execute really well.”

Peterson, who played a little at defensive back in passing situations, said the Statue of Liberty play really caught the Gladiators off guard.

“That first one was ran to perfection,” he said. “I’ve never had that ran on me before, but it was really, really good.”

One bit of good news for the Stags is they go into the playoffs fairly healthy.

The same can’t be said for St. Francis, which likely lost star fullback/linebacker Donahue to a torn meniscus for the season, and saw Kempf leave the game with a hamstring injury. Tight end/defensive end Drew Hardy left with a shoulder injury and had his arm in a sling after the contest.

Beeman led the Stags with 125 rushing yards on 14 carries, with Goethals adding 81, Shier 54 and Hessem 32. Hessem also threw for 77 yards, with Smith leading the receiving corps with two catches for 53 yards.

Flag on the play: Shamrocks take crossover game against Titans

ELK RAPIDS — There was one thing Jack Spencer couldn’t save himself from Thursday night.

ELK RAPIDS — Thursday was a big night for the appropriately named Elks of Elk Rapids.

CADILLAC — Before Wednesday’s match, Cadillac coach Michelle Brines looked up at the gymnasi…

Last Friday’s emotional game at Rodes Field set the stage for what looks to be a bountiful football postseason.