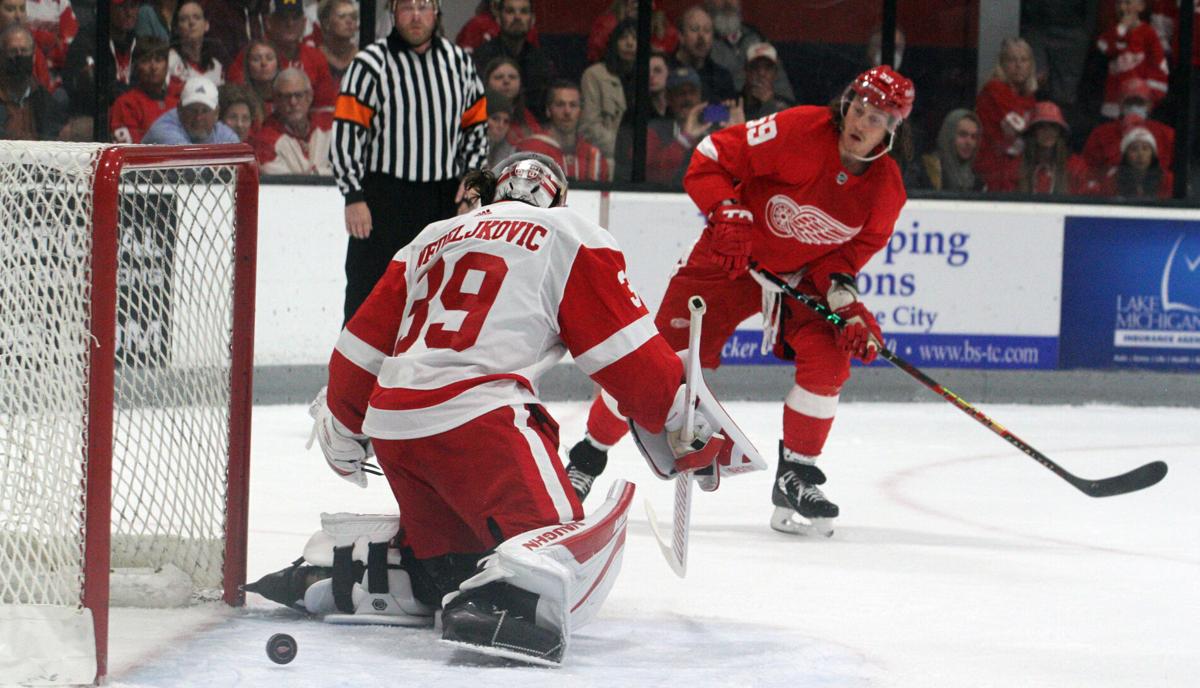 Detroit’s Tyler Bertuzzi (59) shoots through the legs of goaltender Alex Nedeljkovic (39) in Sunday’s Red & White scrimmage game at Centre Ice Arena in Traverse City. The puck ended up going wide of the net. 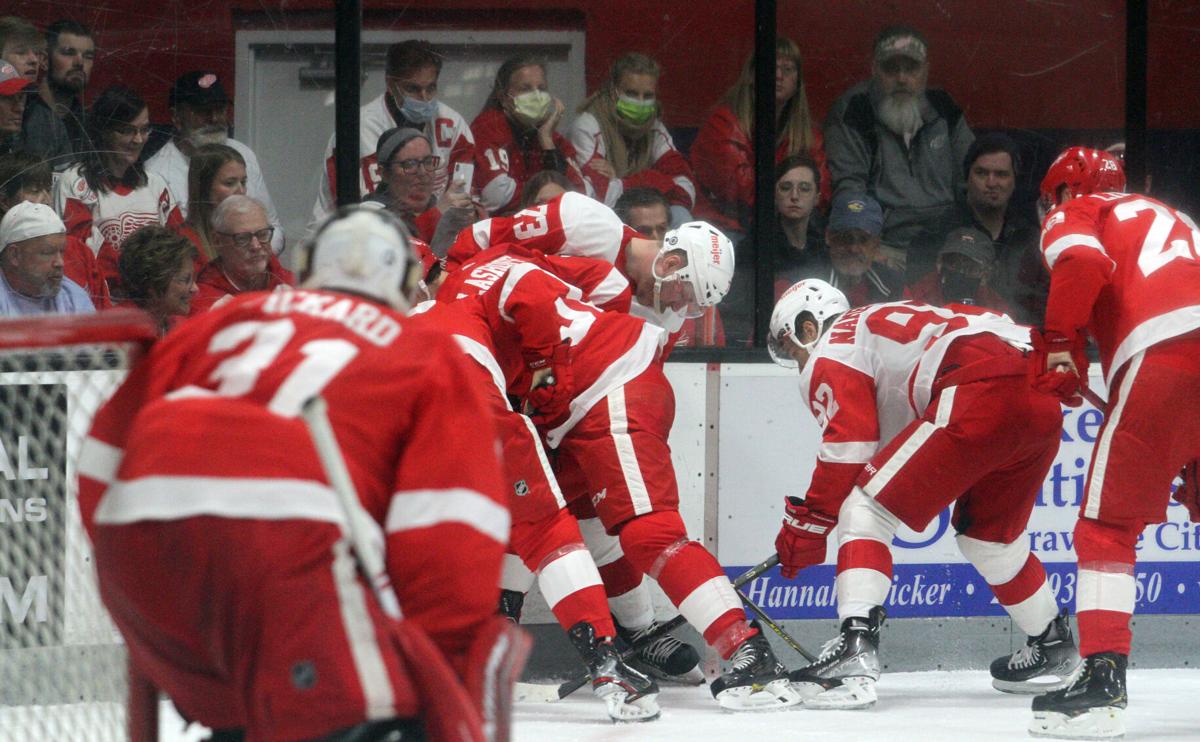 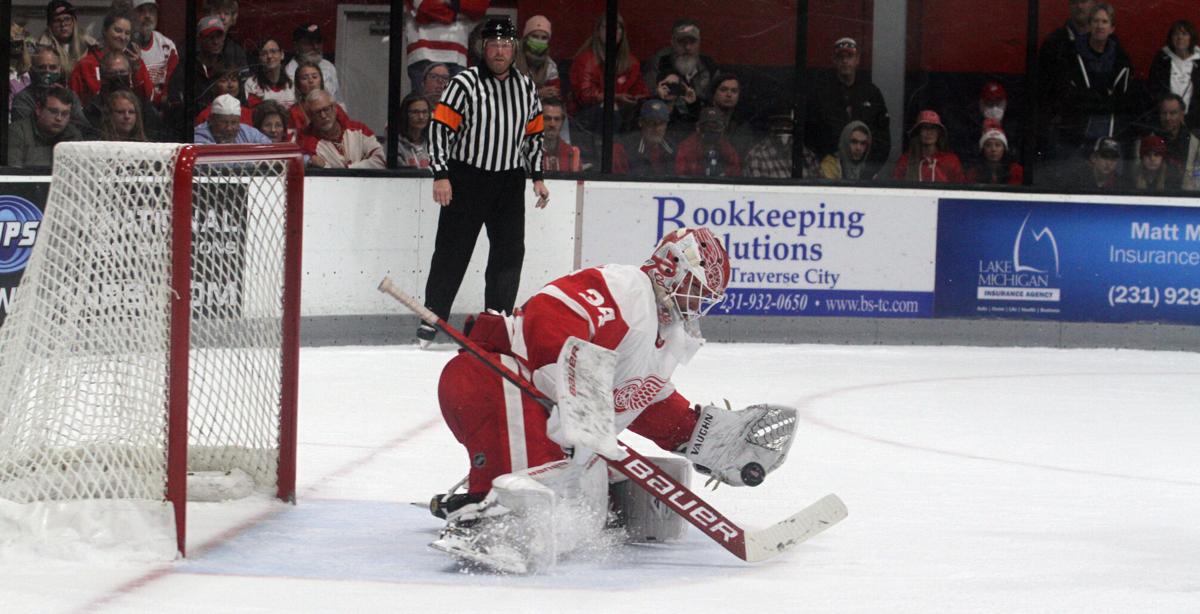 Detroit’s Tyler Bertuzzi (59) shoots through the legs of goaltender Alex Nedeljkovic (39) in Sunday’s Red & White scrimmage game at Centre Ice Arena in Traverse City. The puck ended up going wide of the net.

“I love just being able to see my guys after a whole year,” Abram-Craig said.

Riley said being able to watch the team put together by NHL Hall of Famer and former Red Wings great Steve Yzerman is a treat he won’t forget.

“It’s nice to have them so close to home,” Riley said. “I remember watching Stevie Y as a kid.”

Yzerman watched the game from the Centre Ice suite above the ice surface, along with other Red Wings executives.

Bryan and Deanna Prince came from farther away to see the team Bryan grew up watching.

The Flat Rock native and his wife live full-time in an RV, going back and forth from southeast Michigan to California among their trips while he works as a dark fiction and comedy writer.

It’s their third year attending training camp, and they stayed in Traverse City for all two weeks of the NHL Prospect Tournament and Red Wings training camp.

“We’re loving this,” Bryan Prince said. “We winter in California, so we don’t really get to see the games ... It’s one thing to watch on TV and another to see it live and up close.”

The couple purchased red chairs to affix to their mezzanine front-row seats as Team White won the scrimmage game 3-2 in a shootout.

They were on hand during the Prospect Tournament when Detroit defender Jared McIsaac lost consciousness after a hit from a St. Louis Blues player.

Mitchell Stephens scored both goals for the Red team. He put Red up 1-0 off an Adam Brubacher assist, beating a pair of defenders and snapping a wrister past Alex Nedeljkovic.

Stephens scored again in the second off a feed from Taro Hirose.

“I’m excited to show the players, coaching staff and management what I can bring to the team,” Stephens said.

Yzerman drafted Stephens in the second round in 2015 while with Tampa Bay, then acquired him for a 2022 sixth-round pick in late July. Stephens played for the Saginaw Spirit from 2013-17.

Stephens played in 45 games over the past two years for Tampa Bay, winning the Stanley Cup both seasons. He had three goals and four assists.

“When you’re on good teams, those teams tend to do it right on a consistent basis,” Red Wings head coach Jeff Blashill said. “You bring that kind of maturity in your game and make sure you’re practicing right and you’re doing it right in games. You get to see how the very best team in the league attacks every practice, attacks every day. Just bringing that by example is important.”

Stephens, who spent a day with the Stanley Cup this summer in his hometown of Peterborough, Ontario, said he’s looking to get the same bump in Detroit that Adam Erne did when Yzerman similarly acquired him from Tampa after drafting him in the second round in 2013.

“Adam came in and ran with that opportunity that he got here,” Stephens said.

Dominik Shine put Team White on the board on a rebound past Thomas Greiss with 4:11 left in the first period.

Suter said he’s much more acclimated to the NHL this time around after signing a two-year deal with Detroit after a 14-goal, 13-assist season in Chicago over 55 games in his first NHL campaign.

“It’s more comfortable,” said Suter, a native of Switzerland. “Every game, every practice, you get more used to it. It’s a bit different this year that last year. There’s a real camp this year. So I didn’t have that, and last year was just showing up and start playing, pretty much.”

Suter, who played alongside current Red Wings forward Robby Fabbri in Guelph in 2013-14, scored his first NHL goal January 24 against Detroit, ending that game with a hat trick off Jonathan Bernier.

In the five-player shootout, only Lucas Raymond and Vladislav Namestnikov found the net, both for Team White. Victor Brattstrom stopped all five Team Red penalty shots.

COVID seeping back into sports