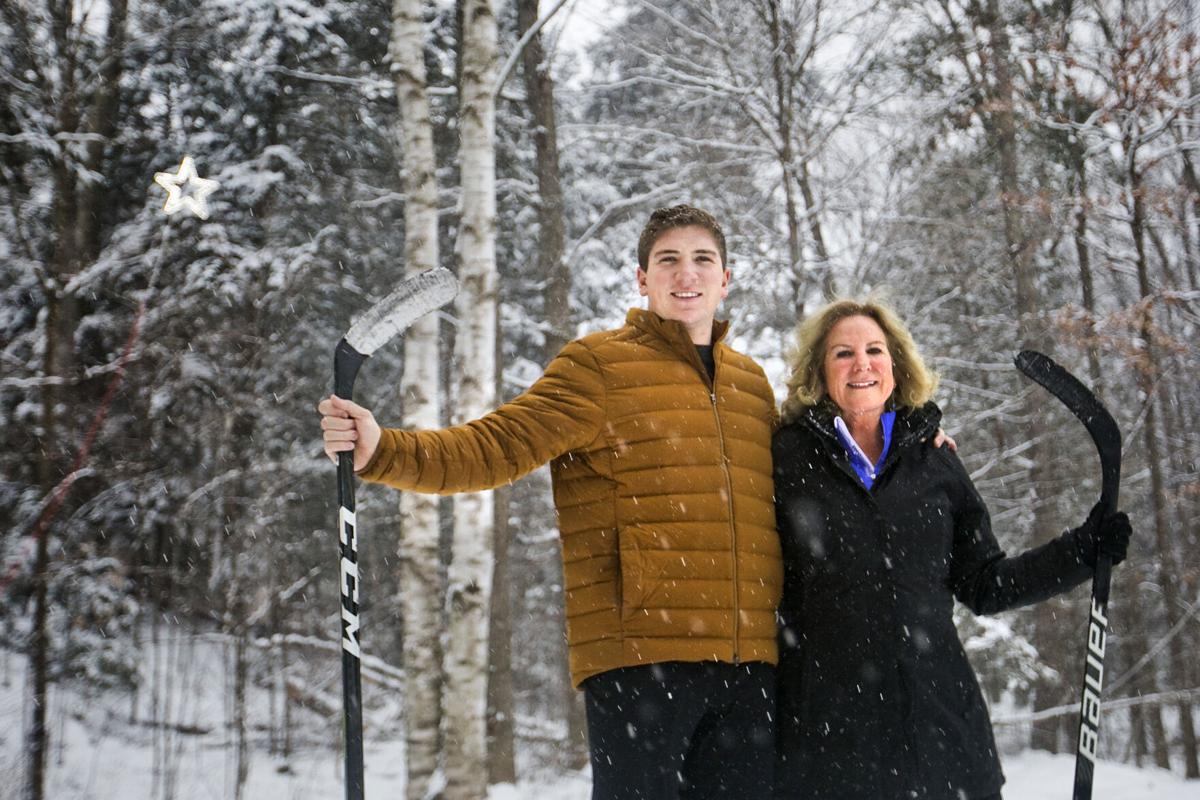 R.J. Deneweth and his mother Connie Deneweth stand on their backyard rink with a star that hangs from a birch tree in memory of their late father and husband, Rich Deneweth, for whom The Deneweth North/South Memorial Showcase hockey tournament is named. 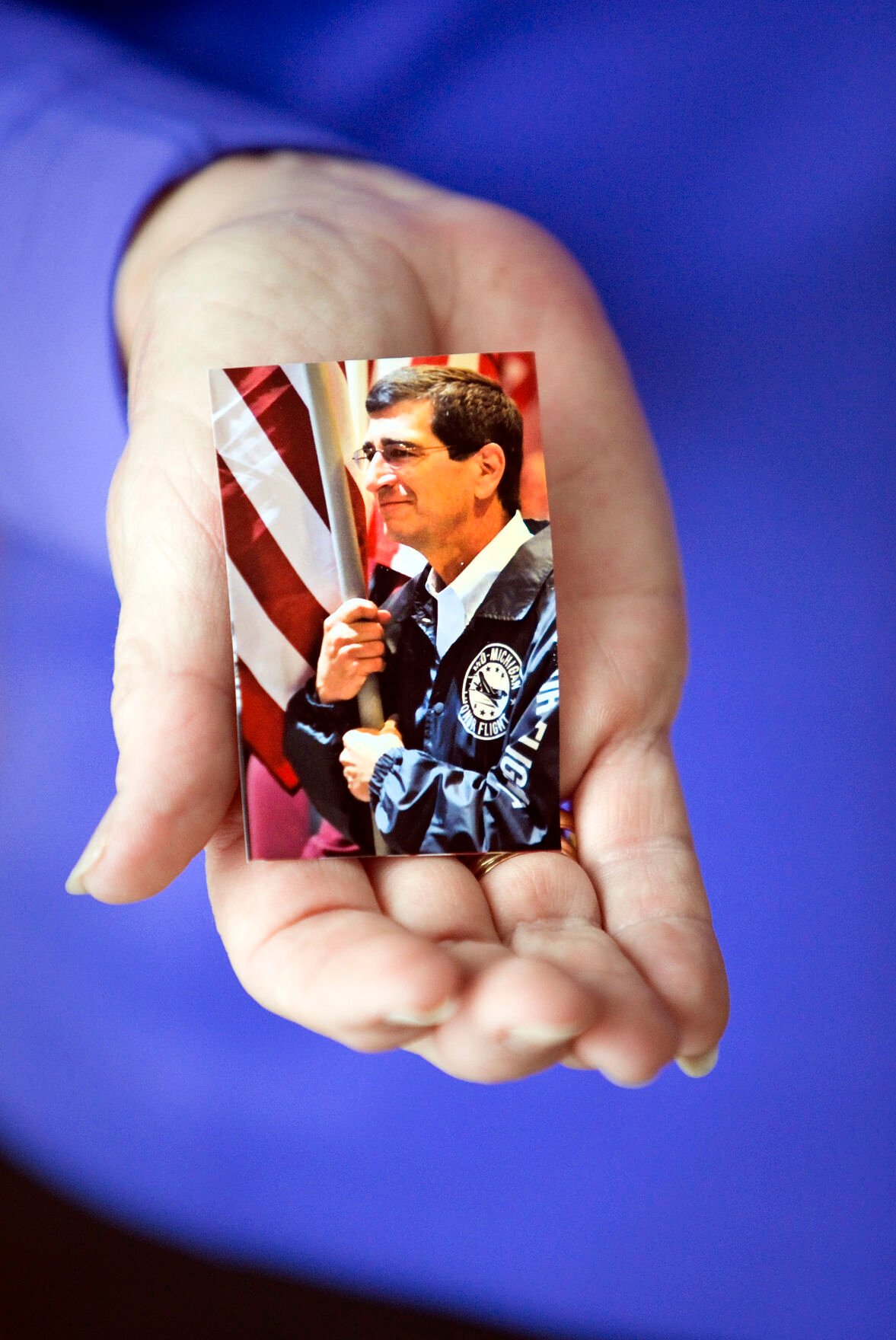 Connie Deneweth holds a picture of her late husband Rick Deneweth, for whom The Deneweth North/South Memorial Showcase hockey tournament is named. 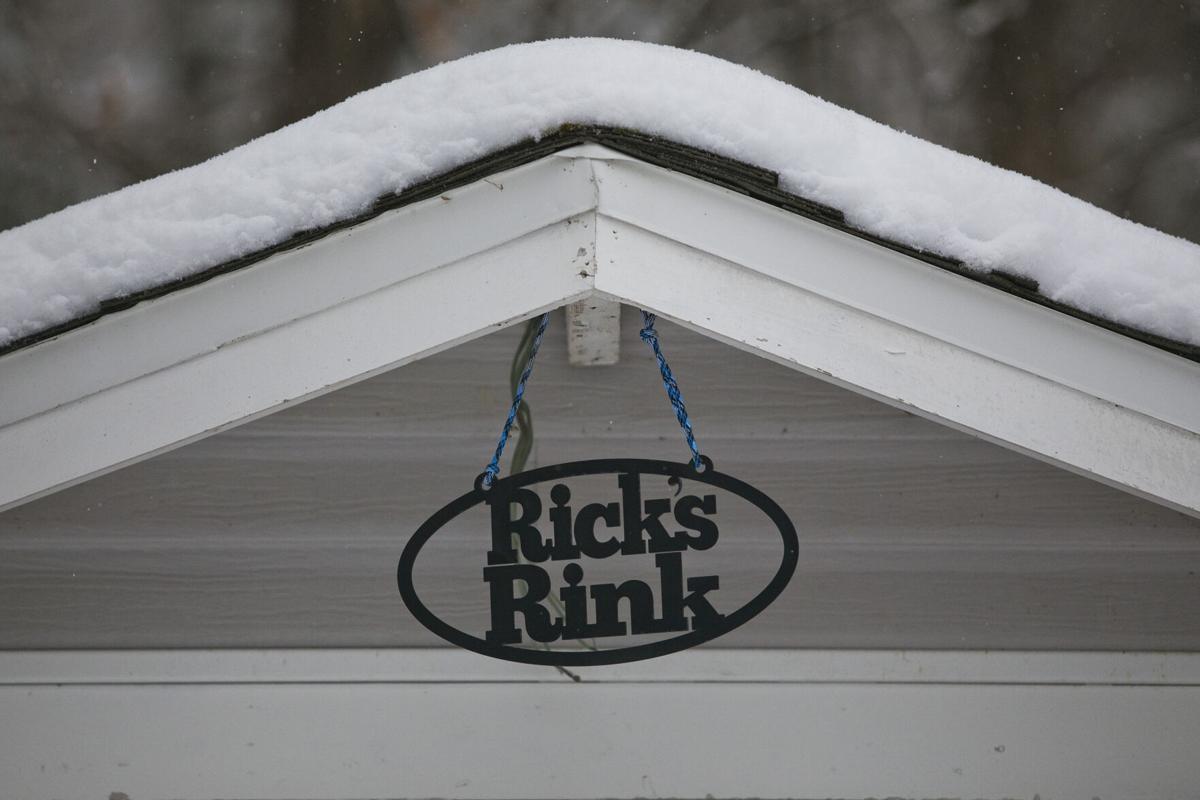 A "Rick's Rink" sign hangs on a shed next to the Deneweth family's backyard ice rink. 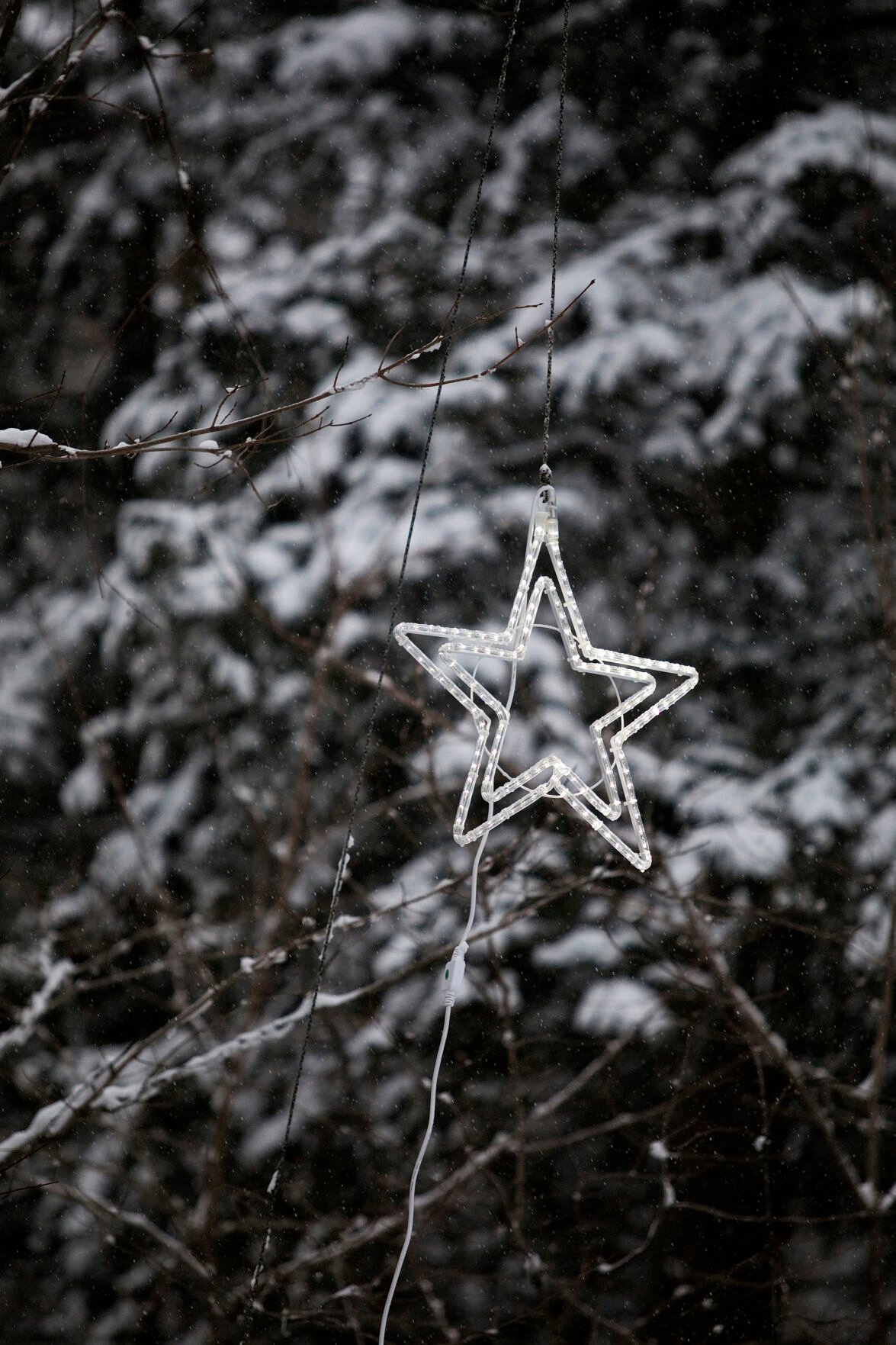 A star hangs from the late Rick Deneweth's favorite birch tree at the backyard ice rink of his family's Traverse City home.

R.J. Deneweth and his mother Connie Deneweth stand on their backyard rink with a star that hangs from a birch tree in memory of their late father and husband, Rich Deneweth, for whom The Deneweth North/South Memorial Showcase hockey tournament is named.

Connie Deneweth holds a picture of her late husband Rick Deneweth, for whom The Deneweth North/South Memorial Showcase hockey tournament is named.

A "Rick's Rink" sign hangs on a shed next to the Deneweth family's backyard ice rink.

A star hangs from the late Rick Deneweth's favorite birch tree at the backyard ice rink of his family's Traverse City home.

TRAVERSE CITY — A star hangs above the backyard rink at the Deneweth household. The star has been there for years, and it will remain there for many more years to come.

The hockey family put together a backyard rink every year for their boys RJ and Chris to practice on. The Deneweths also constructed pond rinks annually on Long Lake, even converting an old Lawn-Boy lawn mower into an ice shaver to help even out the lake’s frozen-but-craggy surface.

The 3-foot, lighted star hangs above the rink — 24/7, all-year-round — as a reminder of Rick Deneweth, who passed away in 2016 just before the start of the high school hockey season at age 59.

Deneweth served as president of the Bay Reps board, and the team’s annual North/South Showcase bears his name since 2017. The tournament starts Thursday and continues through Saturday.

“It’s so heartwarming and uplifting for our family,” said Connie Deneweth, Rick’s widow who continues to work on the Reps’ board and with the team’s annual alumni game during Christmas break. “It sustains us emotionally. We feel that his memory hasn’t gone away.”

The family built rinks on Long Lake starting 16 years ago, long before RJ and Chris made the Bay Reps. Eight years later, they built a backyard rink. Rick brought in an excavator to level out the yard and they added stadium lights and a warming hut.

“I love just having our friends and family out there, having the star,” said RJ Deneweth, a recent Marquette University graduate. “He put so much time into that rink for us.”

This is the first year the rink hasn’t been put up. RJ and Chris were both in college, with RJ getting his master’s degree and accepting a job in Milwaukee and Chris still a junior at Marquette University majoring in finance and supply chain.

The star still hangs, though. The boys had to put it back up after the wind storm a couple of weeks ago.

“We had to make sure it was lit up for mom in the morning,” Chris said.

A laser-cut, football-shaped metal sign saying “Rick’s Rink” still sits atop the warming shed. The sign showed up in the mail about three years ago, anonymously, and nobody stepped forward to claim credit. The family has their suspicions on who did it, but they feel it’s better kept a secret.

When Chris played for the Reps from 2017-19, the North/South Showcase brought in five other teams, along with TC Central, TC West and the Bay Reps. This year’s field was scheduled to have triple that amount at 24 teams, but one squad had to withdraw just before the season.

“It’s crazy to see how it’s grown,” Chris said. “It’s awesome to see his legacy live on through the tournament.”

With four seasons passing since the tournament was renamed for Deneweth, none of this year’s Reps players were on the team while Deneweth spearheaded the Reps’ co-op board that ran the team’s organizational, fundraising and administrative matters.

The showcase has grown into one of the top tournaments of its kind, with former St. Francis athletic director Tom Hardy noting that they’ve received increasing numbers of inquiries not only from teams wanting to play in the event, but also college and junior scouts. Only the Michigan Interscholastic Hockey League showcase tournament in Trenton is larger.

“It’s a cool opportunity for kids from all around the state to showcase northern Michigan,” Waugh said. “When Rick passed, the community lost someone big. You don’t want history to get lost.”

Last year’s tournament was abbreviated by COVID-19, but starting in 2019 the tournament gives away $250 college scholarships to two non-Reps players in the event. TC Central’s Nick Sommerfield and Alpena’s Tanner Orban won the 2020 scholarships.

The scholarships are funded by a raffle held at the tournament. Each team brings a gift basket of local items — whether it’s food, coffee, apparel or craft beverages — to be raffled off. Walled Lake Northern’s basket included an autographed goalie stick from alumnus Connor Hellebuyck, a Vezina Award finalist in 2018 for the Winnipeg Jets. Reps families donate food and beverages to put together a hospitality suite for coaches and referees in the Centre Ice Arena scout’s lounge during the tournament.

“It’s another way we get to continue to honor Rick,” Hardy said. “This was always his dream.”

Deneweth spearheaded the second wave of Reps parents, helping the co-op build a stable core to lead the team’s organizational and administrative matters.

The tournament’s 23 teams boast 16 ranked in the top 25 of their division.

Hardy said since they assign locker rooms at Centre Ice to each team for the entirety of the event, the only way the tournament can get any bigger would be to either share locker rooms or expand to other rinks like Howe Arena in Traverse City or the Kaliseum in Kalkaska.

Sharing locker rooms would likely force teams to take their equipment back to their hotel every day.

Prior to his sudden passing in 2016, Rick Deneweth was a member of the Bay Reps Hockey Association for several years acting in various roles on the board. Deneweth and then-Reps coach Todd Spaulding (now the executive director at Centre Ice) helped get the showcase off the ground.

“I’m glad all the teams are playing in honor of my dad,” RJ said. “It means a lot to my family and me. It’s also great to see the tournament growing. ... All the families making hockey memories. Those memories I cherish forever. That’s what this tournament is all about.”

MAPLE CITY — Glen Lake stormed ahead of Frankfort, in both Friday’s game and the Northwest C…

SAN ANTONIO, Texas — Joe Mixon’s 154-yard day in Detroit against the Lions may still be fres…

TRAVERSE CITY — A dust mop stands right next to the Sabres’ bench during every game, for bot…