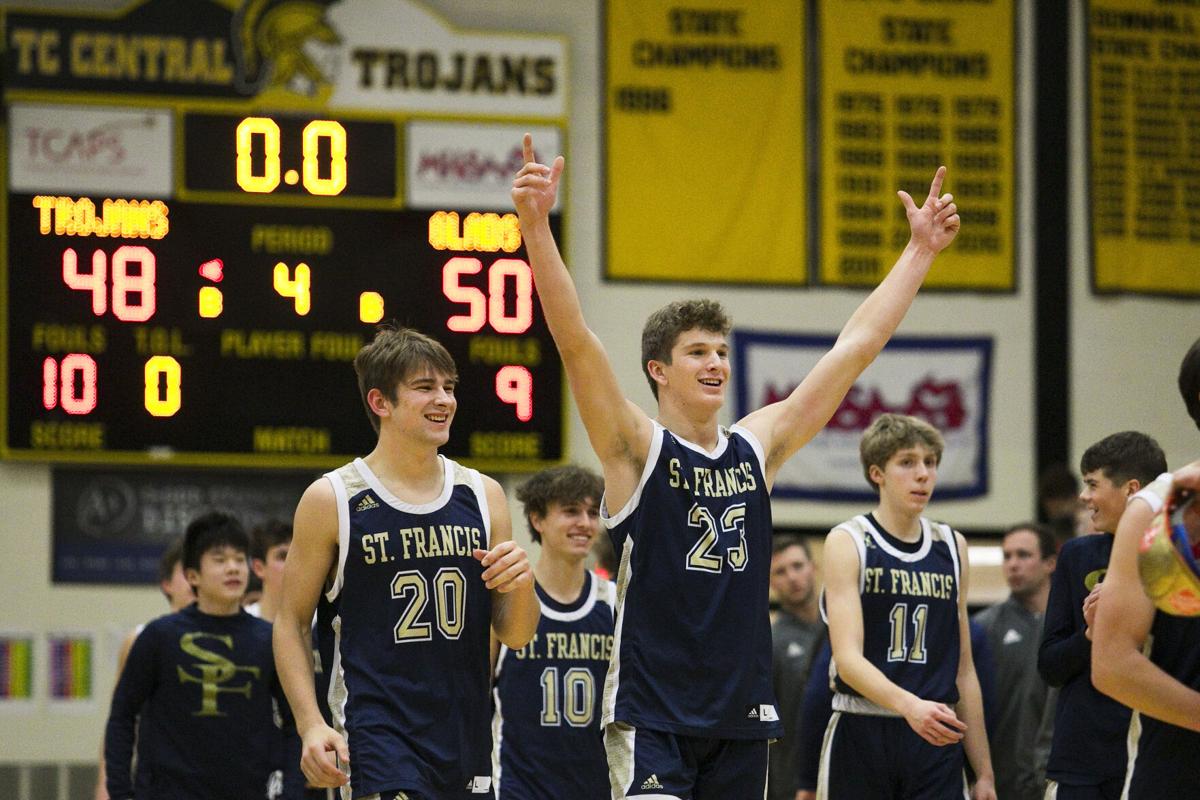 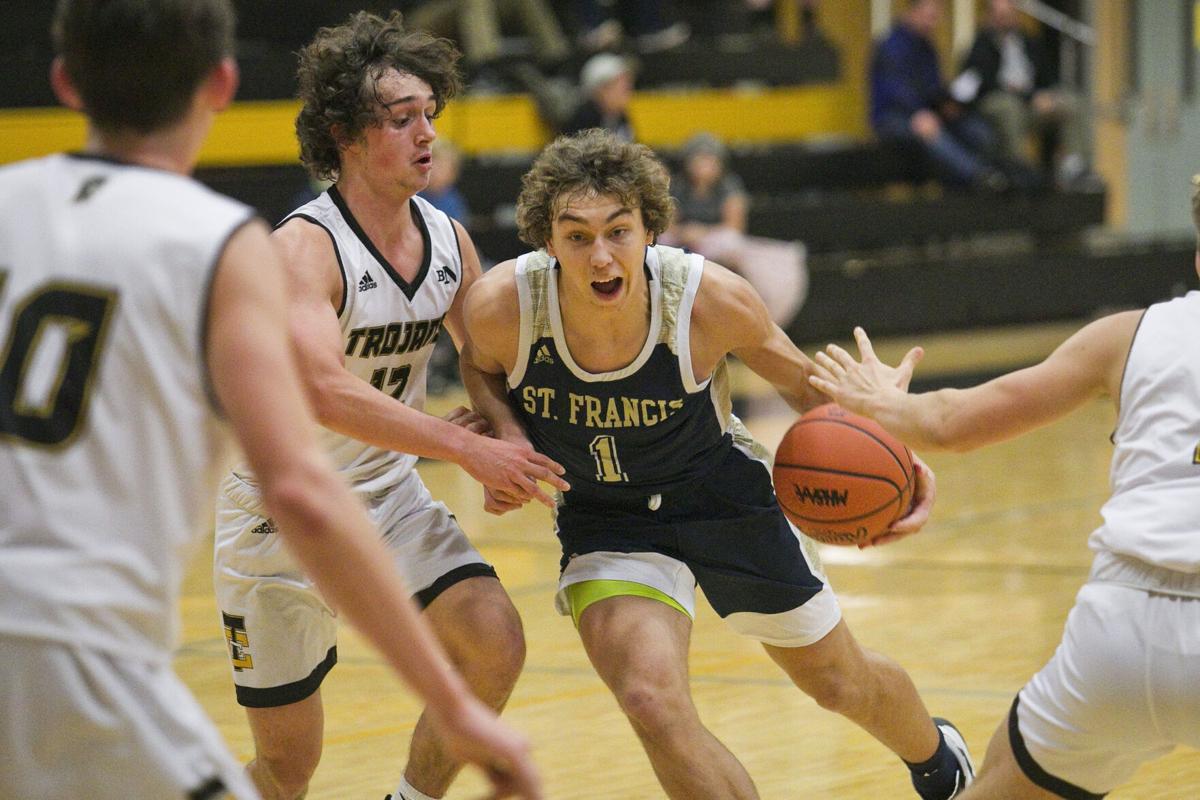 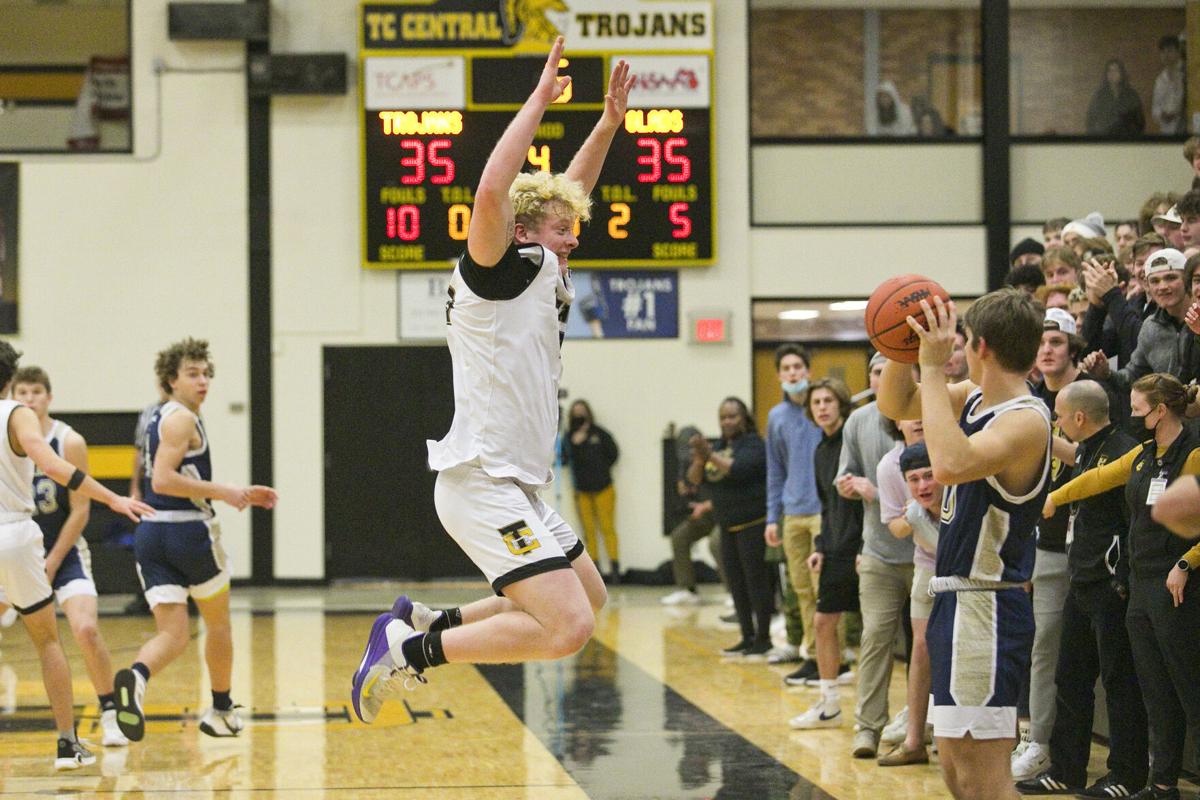 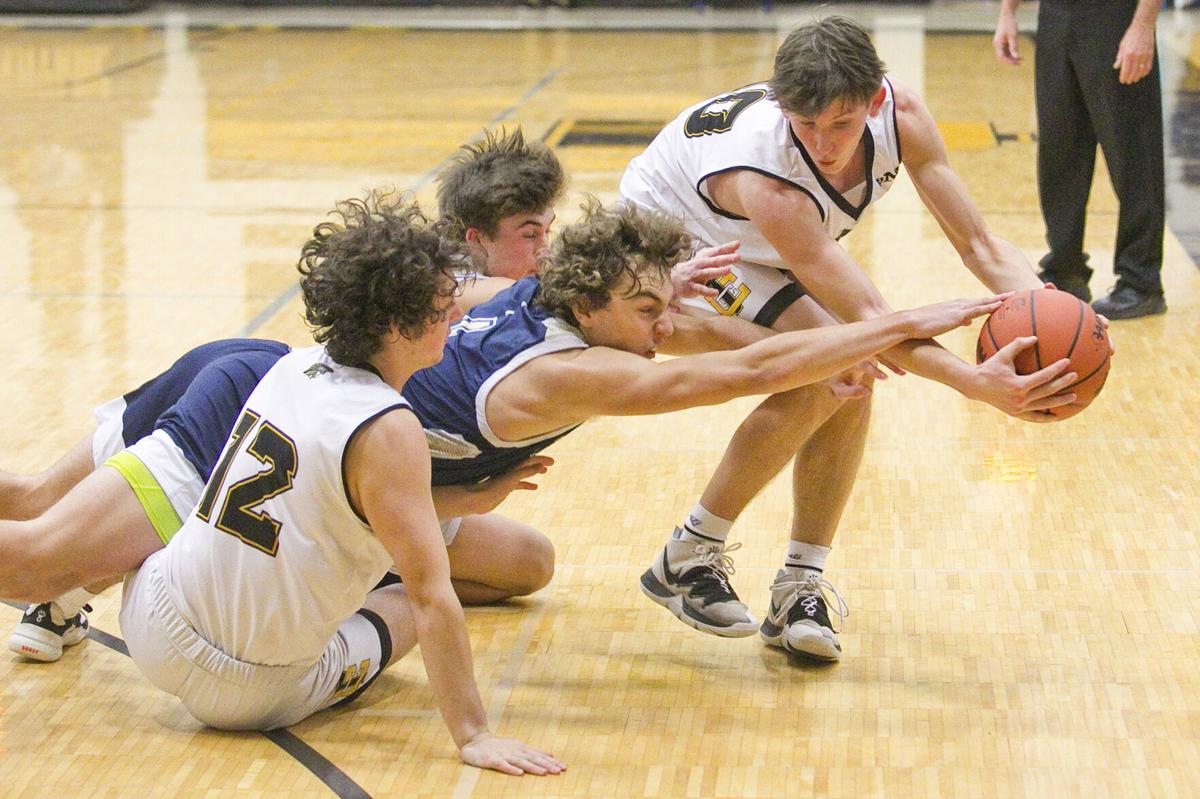 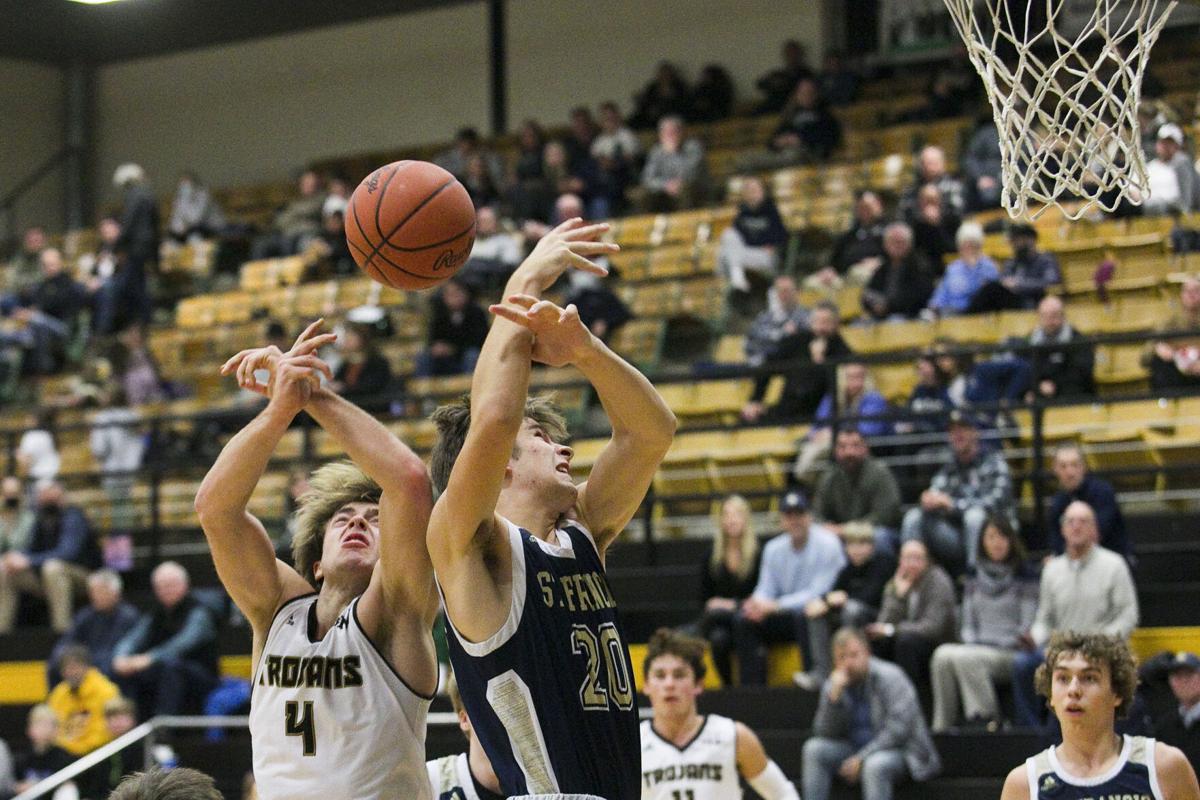 TRAVERSE CITY — Oh, if only this could happen on a football field.

Well, basically it did.

Wyatt Nausadis’ game certainly had an aspect of mythology to it. The Gladiator asserted himself time and time again to the tune of a game-high 31 points, including a crucial 3-pointer with 1:17 left in the second extra session to give St. Francis a 48-47 lead.

Central and St. Francis traded scores in both overtimes, with the first six — conveniently three by each team — each either tying the game or changing the lead in a battle fit for the gridiron. Appropriate, given both basketball squads boast a good number of multi-sport athletes that also play football.

“The atmosphere was crazy and it was super fun to play in,” Nausadis said. “Our team stepped up, and we got that win.”

St. Francis produced the win despite struggling mightily from the line. The Glads (4-1) got Central (2-3) in foul trouble early, and four Trojans fouled out. TCSF didn’t take full advantage of that at the line, however, missing 14 of 29 charity shots.

St. Francis head coach Sean Finnegan made a bet with the team before that he’d take the entire squad out to Qdoba if they made 70 percent from the line this season.

“I’m gonna throw a big old Qdoba party,” Finnegan said. “Our kids seem to love Qdoba more than breathing air, so I figured what better way to encourage them.”

So far, the Glads shot 70 percent or better at the line in just one of five games.

Nausadis did drain two at the line with 10 seconds left in the first overtime, all while the Central student section chanted “Overrated!”

“We wanted this one, for sure,” Nausadis said. “It was good for our program, and it’s good for us to go down the road knowing we got that win under our belt.”

Adam Gerberding scored 11 points as he and Nausadis accounted for 42 of the Gladiators’ 50 points. They scored 21 of 25 in the first half. Gerberding added seven rebounds and four steals. Nausadis chipped in three steals and three boards, including one on a missed TCC free throw with 11.7 seconds left. Drew Breimayer had three blocks.

“It’s awesome because two years ago, they beat us on our home court,” Gerberding said. “That was no fun. So ever since then, we wanted to bring it back to them and beat them on their home court.”

Central senior guard Parker Kolody came off the bench for a very productive night, on a day in which he was the team’s featured player in a pre-game Tweet.

“He had a heck of a game after not playing a lot in the third quarter,” Central head coach Stephen Draper said. “Ben Van Nes got really hot, and he didn’t get in as much as he should. That’s two seniors who got an opportunity because of foul trouble of other guys and came up and made a bunch of really, really good plays for us and kept us in there.”

Kadyn Warner, Van Nes and Anthony Ribel led a balanced Central attack with 11 points apiece. Kolody added six, including two clutch runners in the third and fourth quarters that either tied the game or gave the Trojans the lead.

Gerberding not only ended the night as TCSF’s second-leading scorer, he also guarded Central’s top offensive threat in Ribel, whose last-second 3-pointer off an inbound play just missed at the buzzer.

“Adam, defensively another good showing for him,” Finnegan said. “We put him on their best player every night, and he’s showed up every single night. His attention to detail with our scouting reports and how he’s guarded the other team’s best player has been some of the best defense we’ve had in the five years I’ve been here.”

A raucous atmosphere pervaded the TC Central gymnasium, as numerous alumni from both schools on college packed the stands. Both student sections exchanged taunts throughout a game that stayed incredibly close much of the way.

St. Francis led 13-7 after one quarter, with Nausadis hitting a trio of 3-pointers. Central switched defenders to put Kolody on him, and the Trojans took a 20-17 lead into halftime on Carson Bourdo’s blind turnaround jumper at the buzzer.

“That’s what high school basketball is all about,” Finnegan said. “The atmosphere tonight, just the crowds going back and forth. We haven’t had a game with this type of atmosphere since pre-COVID. It’s kind of fun to kind of get that feeling, where you have your heart in your throat and then all the way down to the bottom of your gut within seconds.”