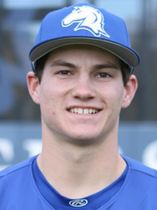 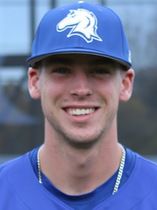 Passinault was perfect on 18 outfield chances over 10 games, including an outfield assist. At the plate, he hit .350 with three RBIs and a .465 on-base percentage in 20 at-bats.

Fellow TCSF grad Cooper Peterson hit .444 in 18 at-bats before the season was canceled by the coronavirus. Peterson had six RBIs, a home run, triple and three doubles, playing eight games as the Chargers’ catcher.

TRAVERSE CITY — Voting is open for one of 10 new possible concessions at Traverse City Pit Spitters games this season.

Last year’s winner, Triple Crown Nachos, will be back on the 2020 menu.

This year’s possibilities include:

7. Sticky Fangus: A hamburger between a pair of glazed doughnuts.

8. Cherry Cheesecake on a stick.

Voting takes place at www.PitSpitters.com. The winner will be announced next month.

Forster fires hole-in-one at The Crown

TRAVERSE CITY — Traverse City resident and Crown Golf Club member Art Forster made a hole-in-one on No. 3 this past week.

He used a 7-iron fo the ace. It was his first hole in one in 50 years of golfing.

CEDAR — Sugar Loaf is hosting a two-person scramble Monday on the Old Course.

The 9 a.m. event costs $150 per team and includes golf, cart, lunch and prizes. It has three divisions (open, handicap and mixed) and is limited to the first 20 teams that sign up. Entrants must have a valid handicap.

For more information or to sign up, visit https://golftheloaf.com/product/memorial-day-2-person-scramble or call 231-228-2040.