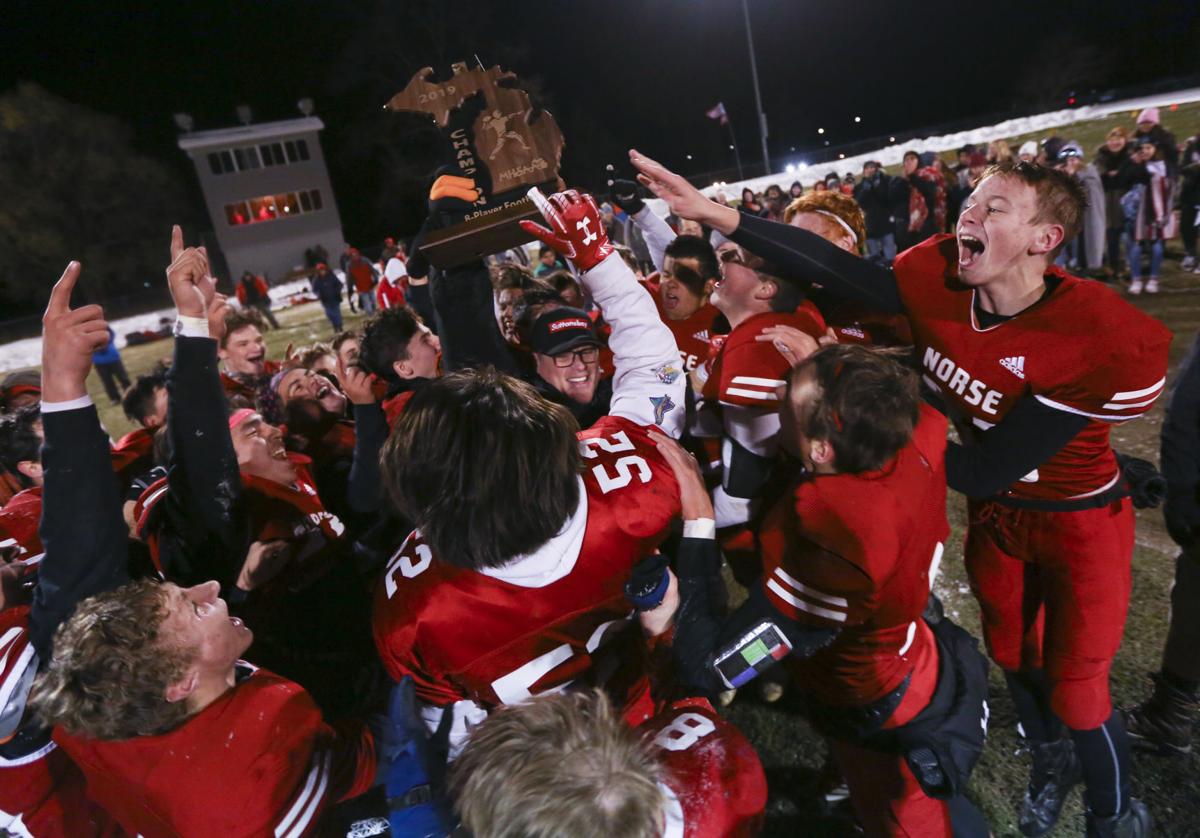 The Suttons Bay Norsemen celebrate their victory in the MHSAA Regional Final at Suttons Bay High School on Friday. 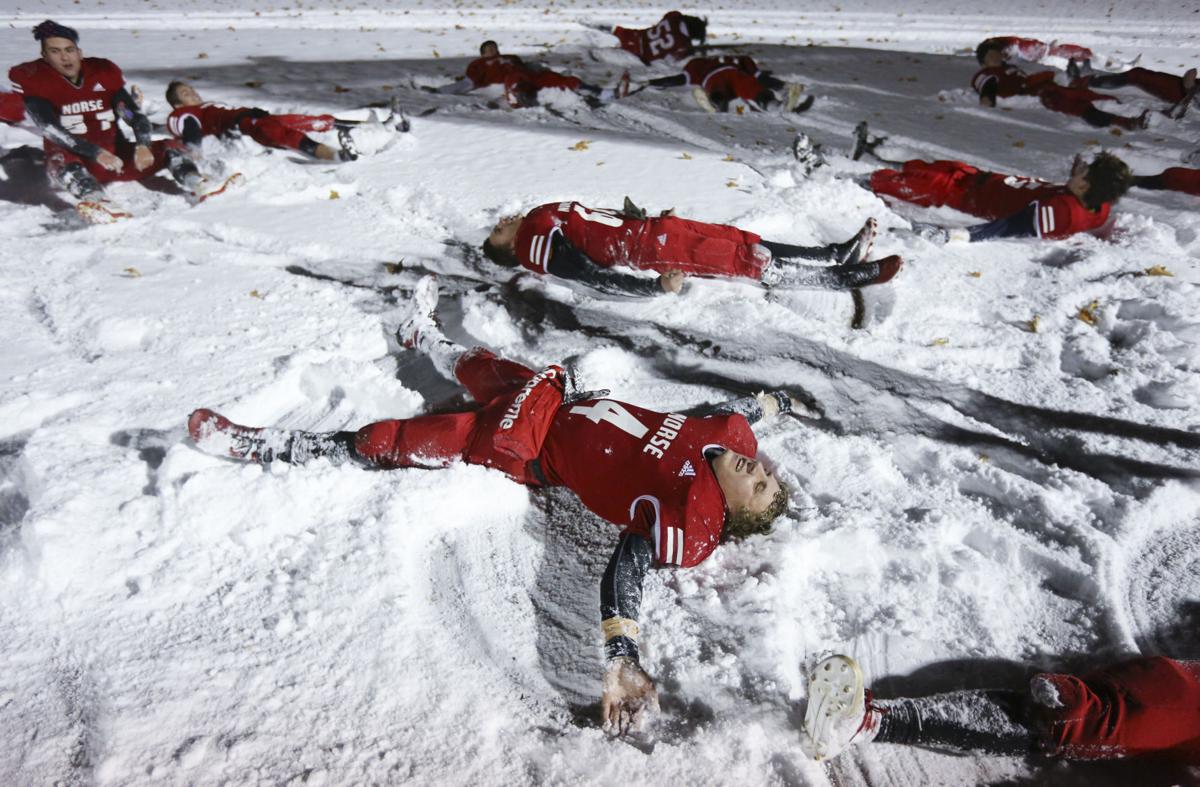 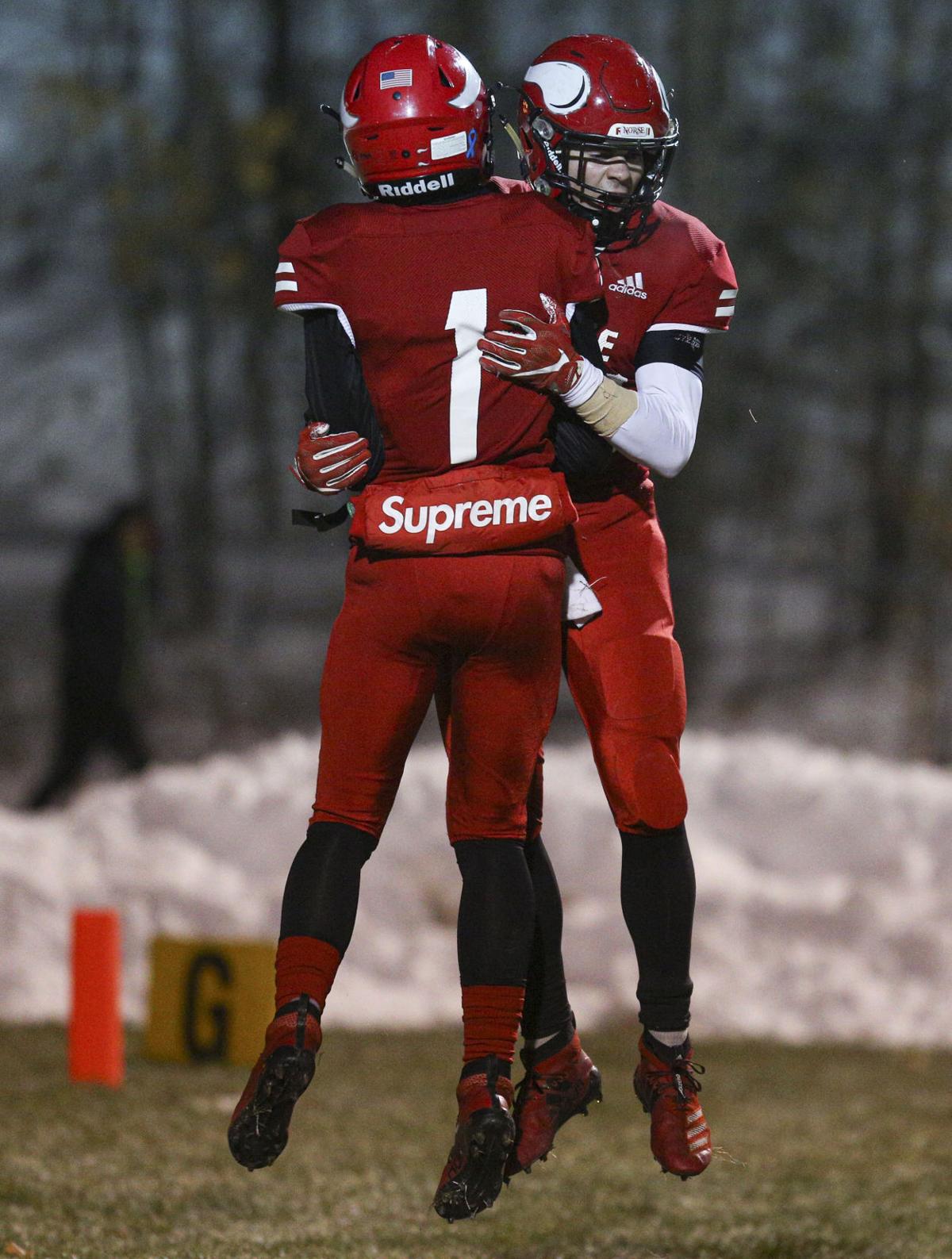 From left, Suttons Bay’s Hugh Periard (No. 1) and Lucas Mikesell celebrate a touchdown during the MHSAA Regional Final at Suttons Bay High School.

The Suttons Bay Norsemen celebrate their victory in the MHSAA Regional Final at Suttons Bay High School on Friday.

From left, Suttons Bay’s Hugh Periard (No. 1) and Lucas Mikesell celebrate a touchdown during the MHSAA Regional Final at Suttons Bay High School.

SUTTONS BAY — How do you fight Snowbirds in the snow?

Get rid of the snow.

Snow removal was accomplished before the game even started at 7 p.m. after about eight inches fell on the area between Thursday and Friday. Actually stopping the Gaylord St. Mary Snowbirds proved even harder.

For the most part, Suttons Bay didn’t — until it mattered most.

An 11-play, 94-yard drive that started with 1:37 left and ended with a Bryce Opie 15-yard TD pass to Lucas Mikesell followed a massive defensive stand as the Norsemen avenged their only regular-season loss — sort of — with a 36-30 victory in Friday’s heart-pounding eight-player football Division 1 regional final at Suttons Bay.

“I have an AED in the car,” Suttons Bay second-year head coach Garrick Opie said after the game. “I think I might use it.”

Suttons Bay athletic director Doug Periard had a lot of help in getting the grass field in impeccable shape for such a big game. With many places buried in a thick blanket of the white stuff, Suttons Bay’s playing surface was as good as any you’ll see a day after a Thursday snowstorm canceled classes at many area schools Friday.

Senior Michael Loucks and junior Michael Wittman stopped St. Mary’s quarterback Brady Hunter just inches short of a first down on 4th-and-3 inside the Suttons Bay 10. A score would have iced the game on day where temperatures lingered in the mid-20s most of the game.

The Snowbirds (5-6) pounded the ball on the ground, with Hunter carrying the rock on all 13 plays of the drive, which started with 9:23 remaining. Gaylord St. Mary kept running the same play — “wedge” — over and over. The Norsemen couldn’t stop it. Then Loucks and Wittman did.

“They finally switched the play to the other side, and we knew what was coming, so we filled hard,” said Loucks, who made 16 tackles on the day. Wittman had 17.

Hunter ran the ball 41 times for 306 yards, getting his number called on 19 straight offensive plays at one point.

Suttons Bay led 20-14 at halftime as neither team was able to slow down the other much.

“We were getting frustrated because we just couldn’t stop it,” Loucks said. “Their offensive line got a good push and they were getting 5 yards every play.”

Bryce Opie scored on a 1-yard run and Cesar Ramirez kicked the extra point for an early 7-0 lead. The Snowbirds came back with a Hunter 58-yard run, and then Opie connected with Mikesell on the first of three touchdown hookups, this one for 11 yards. Earlier in the drive Opie scanned the field, went to his second option, then to his third and threw while two Snowbirds had their claws on him for a 40-yard completion to Cam Knaub.

Hunter again ran one in from 5-yards out, and Mikesell hauled in a 17-yard TD pass from Opie for a 20-14 intermission score.

The first half ended with some defense, as Steven Koscielniak ended two Norse drives with interceptions and Mikesell tipped a fourth-down pass away from Logan Murrell.

St. Mary beat Suttons Bay 48-47 earlier this season, also on the Norse’s field. That win was later turned into a forfeit as the Snowbirds had to wipe away four victories for using an ineligible player.

“Home field advantage definitely exists in a game like this that matters,” Hunter said. “So that hurts, but it is what it is. Even allowing us to make playoffs was just a miracle, and we just thank God for that.”

The Snowbirds snuck into the postseason field anyway at 4-5, landing the 31st of 32 playoff spots and then rocking 8-1 Pellston in the first round.

St. Mary took its first lead at 8:35 of the third quarter on a 6-yard run by — you guessed it — Hunter. He also ran in the conversion, as he carried the ball on eight of nine plays that drive, not counting the conversion.

That lead didn’t last long, as Mikesell reversed field on a run and went left, with Opie freeing him up with a downfield block that allowed Mikesell to go 58 yards for the score.

The Snowbirds responded with a nine-play drive that featured Hunter seven times, including a 3-yard TD run and then the ensuing conversion for a 30-28 advantage.

Total all-purpose yards were 453-447 in Suttons Bay’s favor. The game overall was just as close.

Hunter had a kickoff return after Mikesell’s go-ahead TD catch with 18.5 seconds left that appeared headed for the endzone, but the sideline referee said Hunter stepped out of bounds at the St. Mary 48.

“We wanted it so bad,” Mikesell said. “Bryce and I talked so much about this. We were nervous, but I told him we deserve this and we worked so hard for it.”

After the game, every St. Mary player knelt in silence, holding hands in a circle. Moments passed as each Suttons Bay player’s name boomed over the loud speaker as they received their medals. The Snowbirds knelt in silence until the medals were all handed out, and then senior Alex Powers led the team in prayer.

Tears flowed as each St. Mary player hugged every teammate in the end zone, a place that reaching one more time would have sent the Snowbirds and not the Norsemen into next week’s state semifinal.

“Adversity is a great word to sum it up because we just faced a bunch of it throughout all those forfeits we had,” Hunter said. “We were lucky enough to not have any injuries, but it was just great to be able to finish the season as brothers. The offensive line pretty much carried us the whole year.”