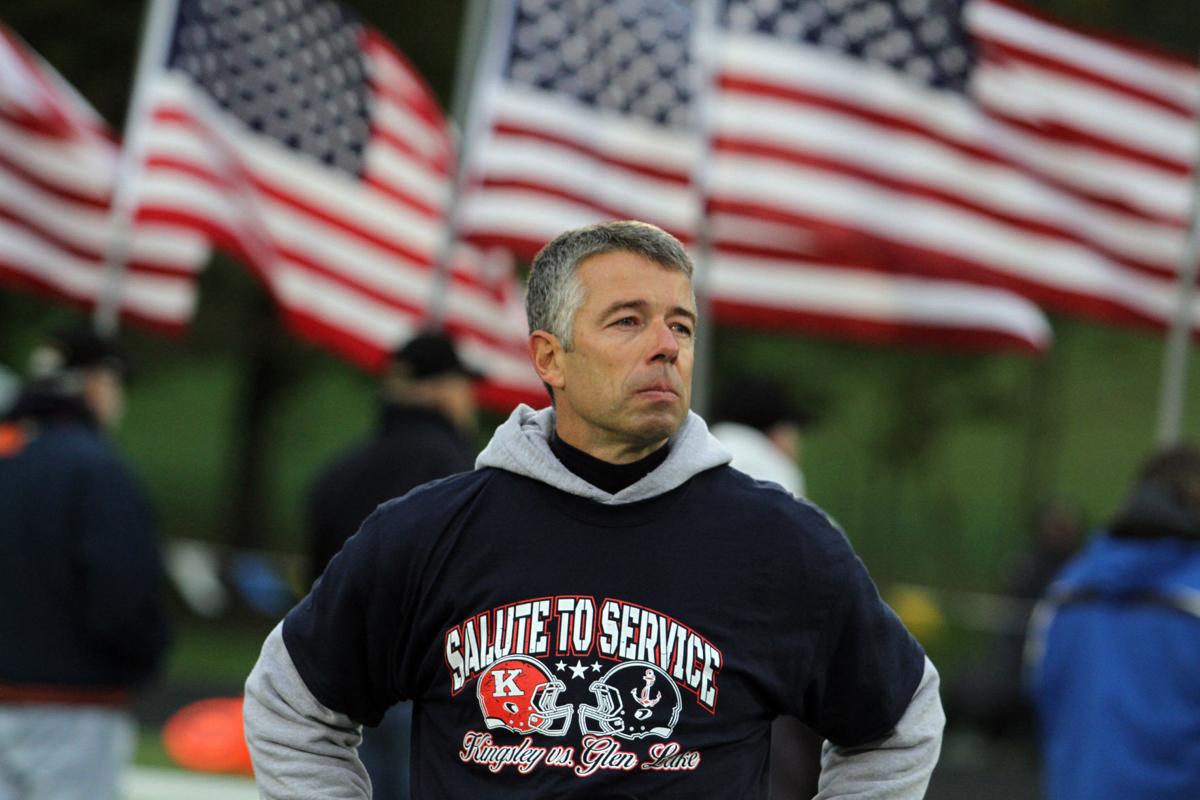 Kingsley head coach gets emotional during the ceremony prior to the inaugural Salute To Service game last year at Glen Lake. Kingsley hosts the game this year. 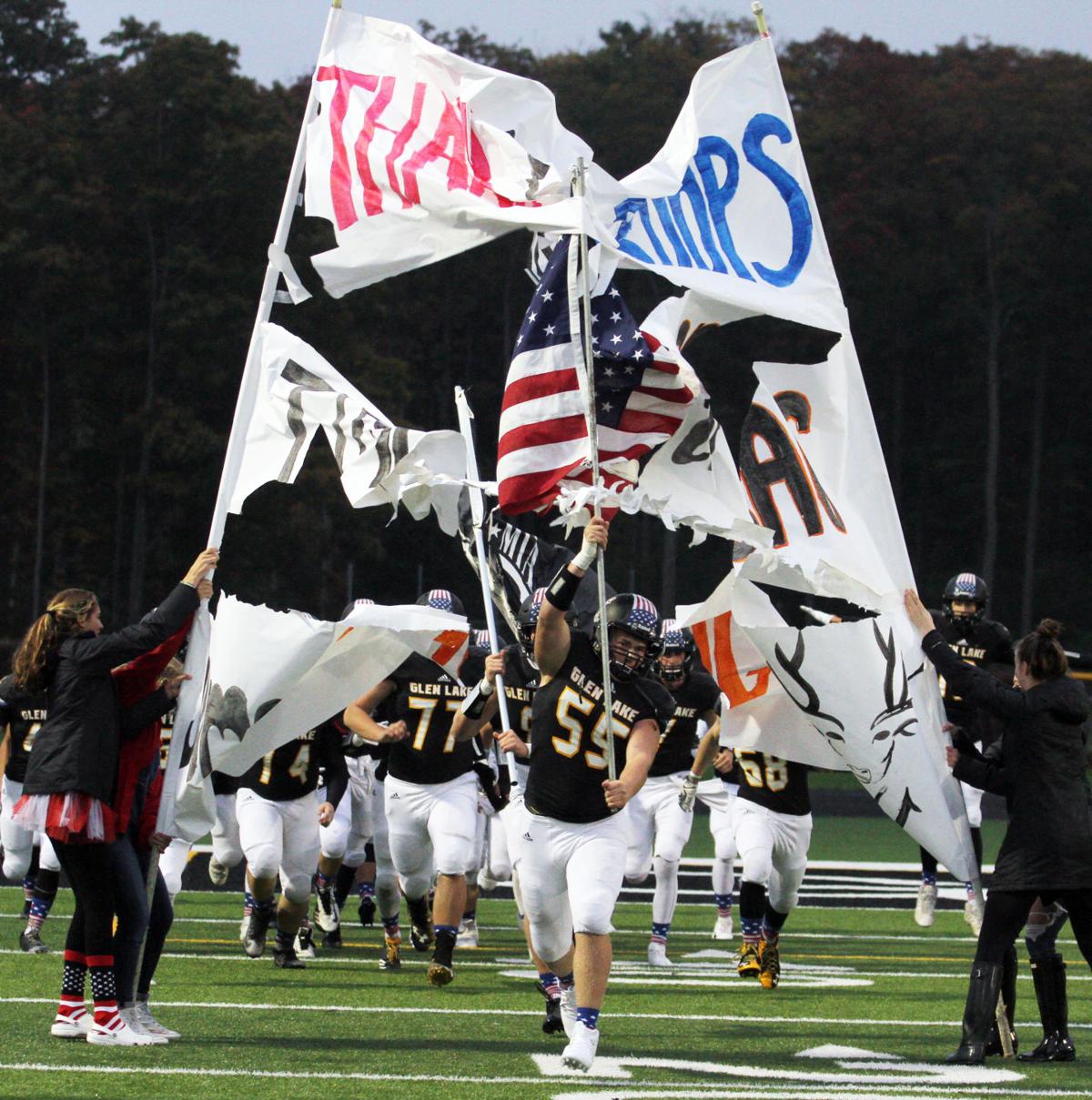 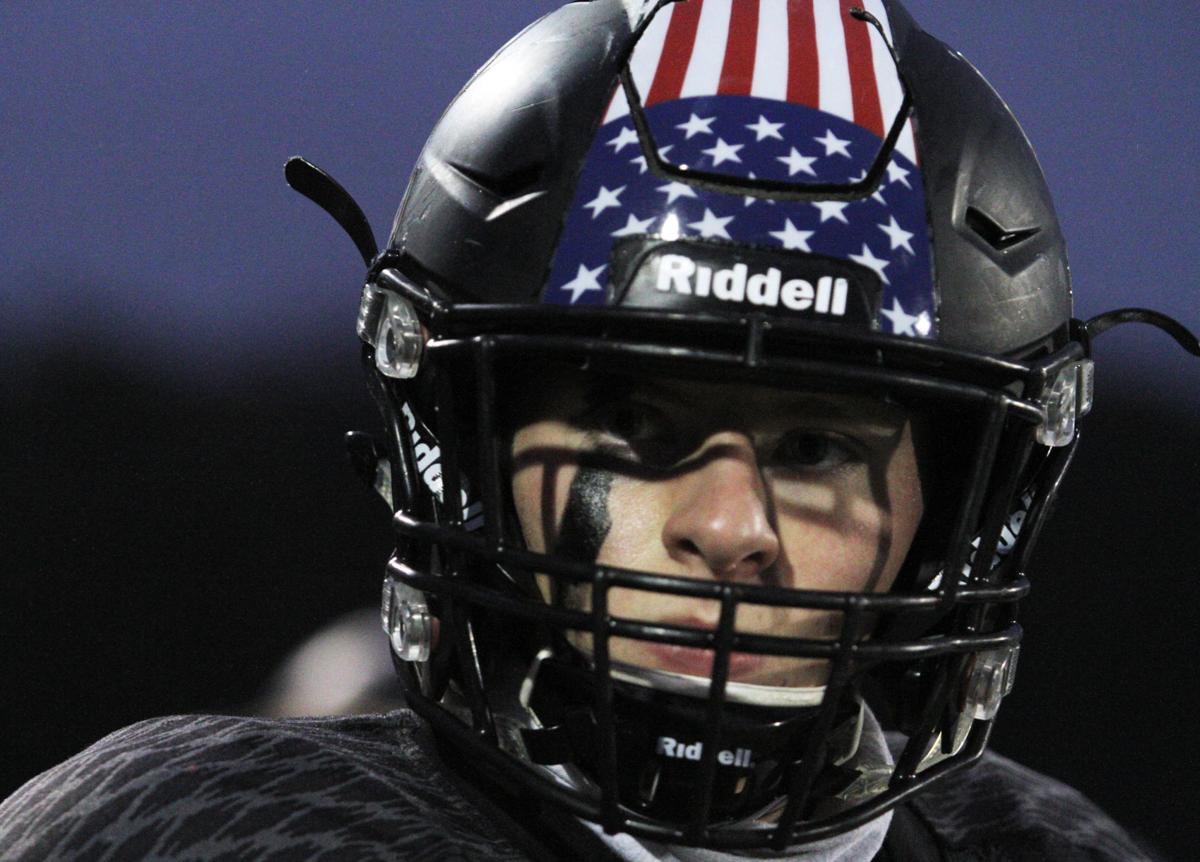 Glen Lake's Drew Peterson looks on through a helmet adorned with the U.S. flag at last season's inaugural Salute To Service game at Glen Lake.

Kingsley head coach gets emotional during the ceremony prior to the inaugural Salute To Service game last year at Glen Lake. Kingsley hosts the game this year.

Glen Lake's Drew Peterson looks on through a helmet adorned with the U.S. flag at last season's inaugural Salute To Service game at Glen Lake.

KINGSLEY — About as big as a regular-season high school football game gets, Friday’s Salute to Service football game becomes more than that.

The clash between undefeated Glen Lake (6-0) and Kingsley (6-0) pits two teams ranked in the top five of their divisions against each other on the Rodes Field grass.

The game between the hedges — huge.

The sentiment behind the game — even more so.

Friday’s second annual Salute to Service pays honor to military and first-responders, and while each school presents plenty of opportunity for that, each has a former head coach who can exemplify everything about the game.

Glen Lake’s Bill Hollenbeck and Kingsley’s Joe Heiler coached the two teams in question for decades each — but before that service to their schools came their duty to country.

Both served in the Vietnam War, and were even in the country at the same time, something they didn’t discover until this week.

Wooer asked him to attend Friday’s game, and Heiler promised he would.

“I’ve always shied away from things like this,” Heiler said. “It brings back a lot of memories. I don’t know how I’m going to react. I have mixed feelings about it. It left in indelible mark, definitely.”

Heiler served in the U.S. Army infantry from 1970-71, in the 2nd Battalion’s 25th Infantry and later the 11th Armored Cavalry. He said he was diagnosed with PTSD in 2010.

Hollenbeck served in U.S. Air Force Intelligence and flew 161 combat missions in Vietnam, based out of Phuket.

“I hope all the vets are getting a lot of attention,” Hollenbeck said. “I hope to represent Glen Lake, get to meet Joe again and see a good game.”

“His teams were always fundamentally sound and in good physical condition,” Hollenbeck said. “It was always a class act. If you’re playing Kingsley, you better be prepared. You just knew you had to be on top of your game to come out ahead.”

Hollenbeck posted a 159-72 record at Glen Lake from 1983-2009, with a four-year break in the early 2000s. His Lakers won the 1994 Class DD state championship and advanced to the 1996 state finals and 1995 semifinals. He was elected to the Michigan High School Football Coaches Association’s Hall of Fame in 2001 and Michigan High School Coaches Association’s Hall in 2004.

The Lakers will also hold a reunion of the school’s 1994 state championship team in Glen Lake’s home Week Nine matchup with Grayling, giving the players assembled a banquet the following evening.

Heiler won 97 games at Kingsley, taking over a fledgling program that had previously won only five games in its first five seasons and was one of the smallest schools at the time in the Northwest Conference. He served as head coach for 26 years, posting three Northwest runner-up finishes (1983, ‘84, ‘90), each time logging a 6-1 league record behind a perfect Frankfort squad. He retired as a teacher and coach in 1998.

“We had some great games together,” Heiler said of facing off with Hollenbeck. “It was always a pleasure playing Glen Lake.”

Heiler started coaching Kingsley just a year after serving in Vietnam. He recalls Northwest Conference coaches and administrators hanging out regularly, with rival schools hosting golf outings and going to dinner together.

Bill Wooer — Tim’s father — stepped down after starting up the Kingsley program. That’s when Heiler took over. Bill Wooer later rejoined the staff as an assistant coach and suggested the coaches take a field trip to Cheboygan to learn the Wing-T offense from coaches of the Chiefs, who had posted four consecutive 9-0 seasons at the time. The Stags started running the offense and immediately ripped off four winning years of their own.

Tim Wooer now runs the same offense at Kingsley, and Heiler said he hears the number calls at Stags home games and knows what’s coming. Many of Wooer’s current assistants played for Heiler back in the day, and Ray Fisher faced off against him as a linebacker at Manton.

“The beautiful thing about the Northwest Conference at the time, the coaches, athletic directors and schools all got along so well,” said Heiler, who also served as Kingsley’s athletic director. “You wanted to beat the other guy on Friday, but you did things together. It was wonderful.”

The game itself — between Division 6 No. 1-ranked Glen Lake and Division 5 No. 4-ranked Kingsley — has the look of a wonderful one.

One made possible by the likes of Heiler and Hollenbeck.