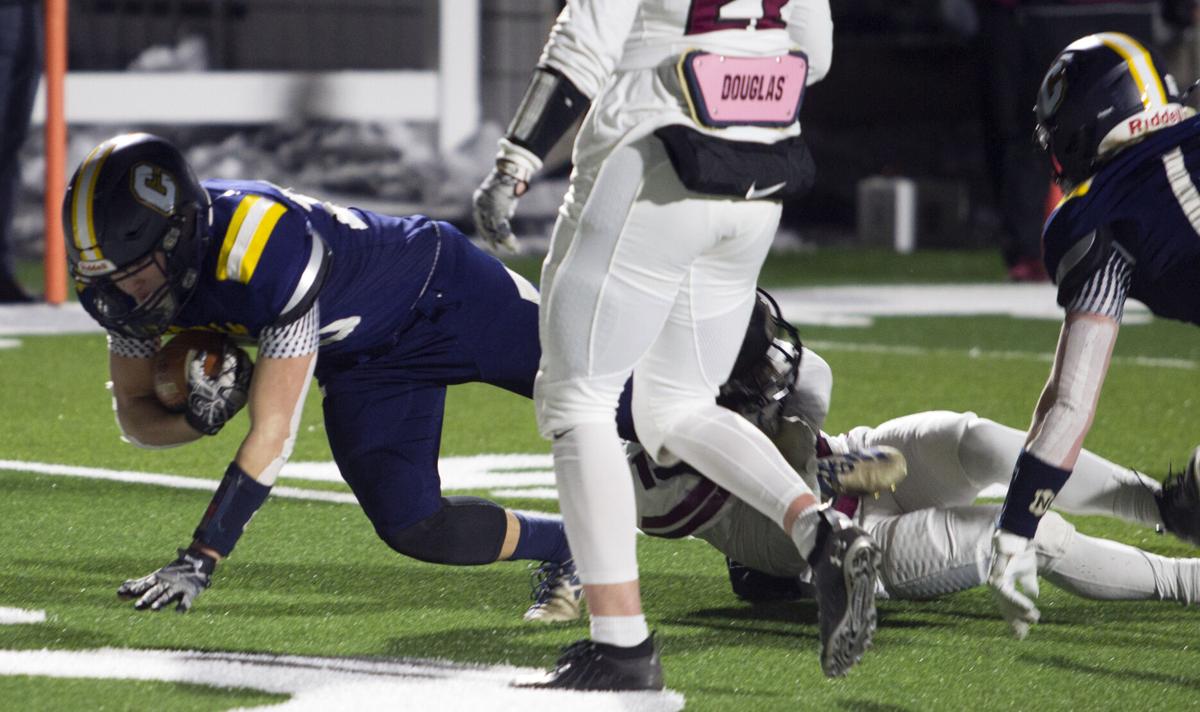 Cadillac senior Noah Cochrane scores a rushing touchdown in the first quarter of a Division 4 regional final at Thirlby Field in Traverse City on Saturday. 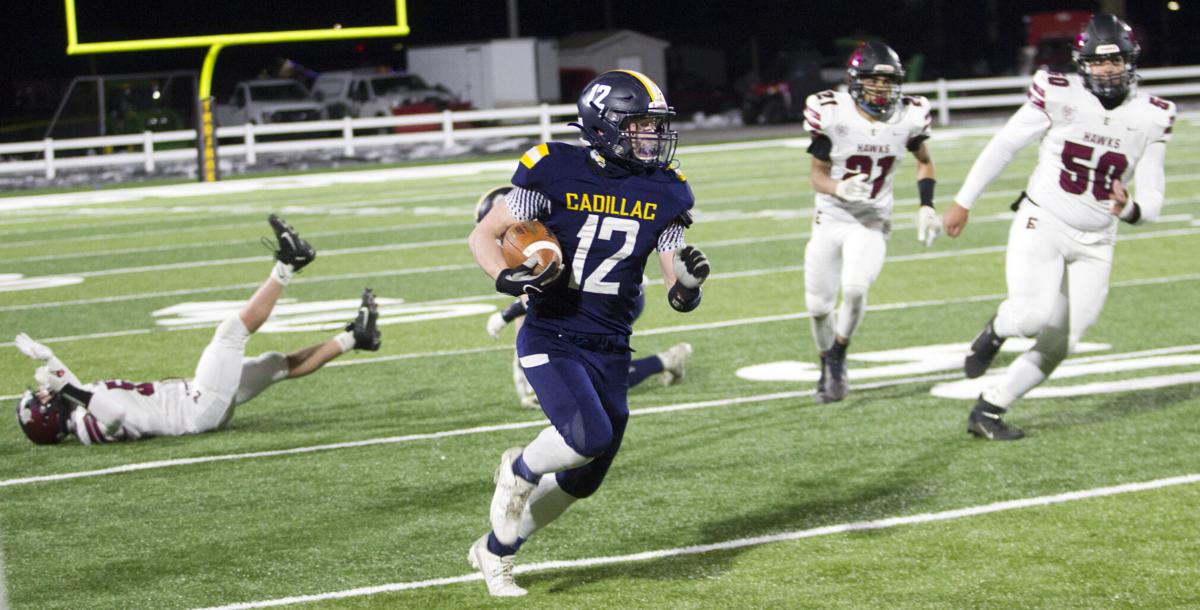 Cadillac junior Carter Harsh takes a screen pass for a first down during a Division 4 regional final at Thirlby Field in Traverse City on Saturday.

Cadillac senior Noah Cochrane scores a rushing touchdown in the first quarter of a Division 4 regional final at Thirlby Field in Traverse City on Saturday.

Cadillac junior Carter Harsh takes a screen pass for a first down during a Division 4 regional final at Thirlby Field in Traverse City on Saturday.

With both teams winning dramatic come-from-behind victories in the previous four days, both the football and volleyball teams are headed to the state semifinals.

“That was all the talk at school today,” said Cadillac defensive back Dan Gray, who said he was able to live stream part of the volleyball game. “Everyone was saying how cool it was that happened.”

Both Viking teams meet up with the state’s No. 1-ranked squad — two-time defending state champion Grand Rapids Christian in volleyball and top-ranked Edwardsburg (9-0) in football.

“It’s big for the whole town,” Gray said. “It’s even bigger for football. We’ve never gotten this far in football. Everyone is really geeked up about it.”

Volleyball outside hitter Macy Brown was a team manager in eighth grade the last time Cadillac made it to Battle Creek. The Vikings fell behind 0-2 to Birch Run before taking the last three sets to punch their ticket to Kellogg Arena.

“I haven’t been since I was in eighth grade when I was on the bench,” Brown said. “I’m super excited. My freshman year, we were in the same spot. We lost the first two sets, won the third and lost the fourth. So after that I was like, ‘OK, I don’t want this to happen again.’ I’m so excited to go back and get to miss school and spend the night in Battle Creek.”

Edwardsburg played in the state championship game in two of the previous three seasons, winning the 2018 crown over Chelsea.

The Eddies almost exclusively run the ball. Cadillac head coach Cody Mallory said their run rate is 96%, whereas his team’s is 92.

“Those guys are good,” Mallory said. “It’s a lot like watching TC West. They’re the only team we’ve seen that runs more than us.”

Edwardsburg threw for just 130 yards in eight games this season, but produced only one game against Bay City Western where it didn’t eclipse 300 rush yards. The Eddies rung up over 400 rush yards five times and had four contests without a single passing yard.

Edwardsburg also isn’t all run offense. The Eddies boast a great defense as well, with only three of five foes managing over 100 rushing yards. Three were held under 65 ground yards, including No. 5 Grand Rapids South Christian in a 47-7 throttling.

“We worked hard all season to get here, and we’ve got to keep doing our thing,” Gray said. “We’re two running teams that like to wear the other team down.”

Only Jonesville (7-0) in late September reached double digits against the Eddies, managing 16 points.

Cadillac (7-2) has its own solid defense, allowing more than 20 points only to the two Traverse City schools and to Grand Rapids Forest Hills Eastern last Saturday. The Vikings trailed 20-6 at halftime and largely blanked Eastern in the second half to rally for a 27-23 victory and the program’s first regional championship.

Viking volleyball goes into the semifinals without starting middle blocker Carissa Musta, who is in quarantine after a family member tested positive for COVID-19. Junior Madyson Smith started in Musta’s place against Birch Run.

“Like we’ve said all season, ‘Next man up,’” Cadillac volleyball head coach Michelle Brines said. “We’ve had altered lineups all season long. Maddy did a great job in there. Obviously our opponent played three sets and out, which I figured. You just go down there and you play as hard as you can and you don’t go down there and think that, ‘Oh, we’re just here to show up.’ You want to go and you want to win.”

A week after moving their football game to Thirlby Field in Traverse City fairly late in the week, the Vikings now have to travel almost to Indiana to Edwardsburg, a town about two miles from the Hoosier State border.

“It was a positive,” Gray said. “Our field was basically a sheet of ice, but we would have liked to have played one more at home.”

Delay lets Glads get captain Piedmonte back for semifinal

GRAYLING — Grayling need look no further than last season to put the task at hand in perspective.