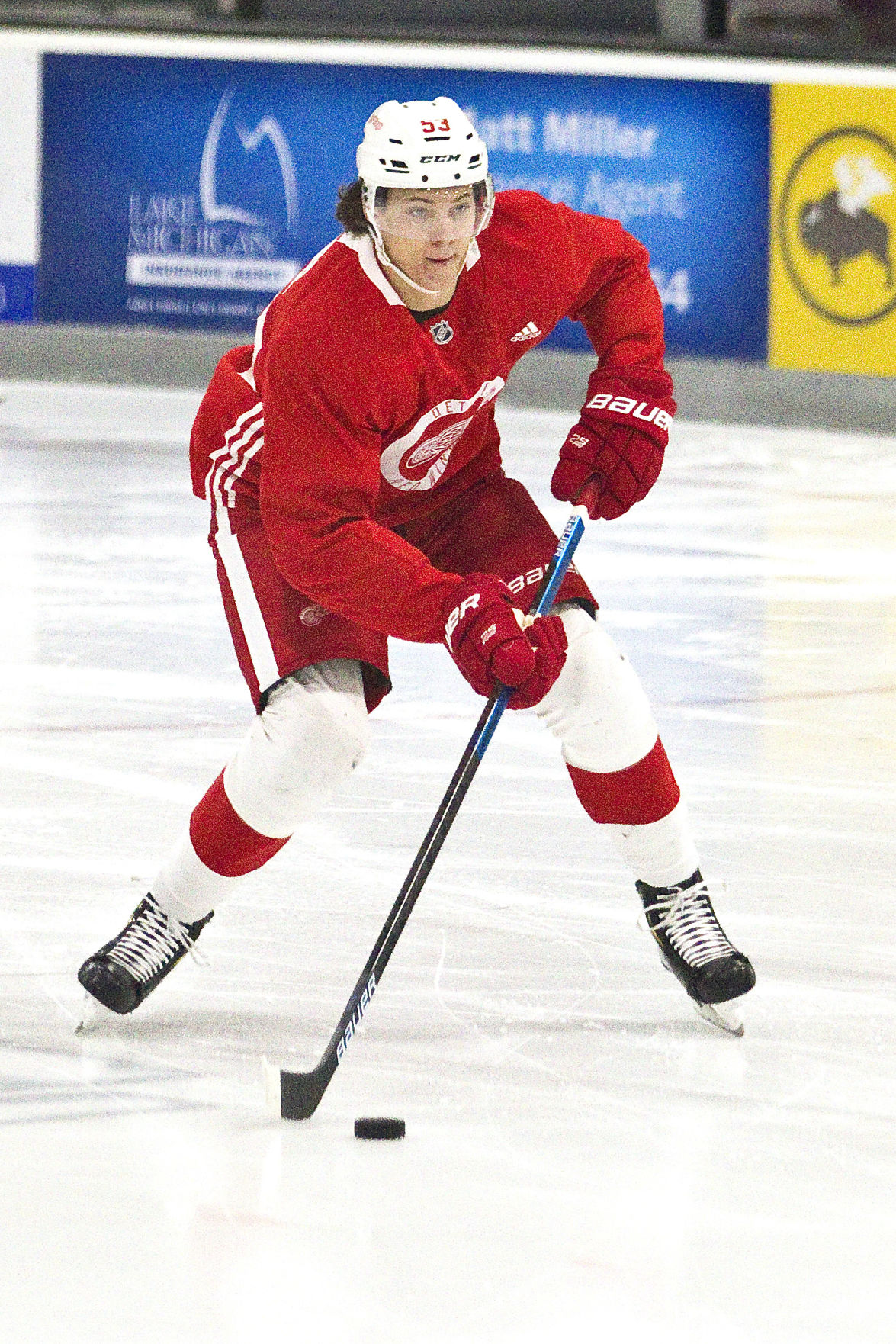 Defenseman Moritz Seider skates during the Detroit Red Wings practice on the first day of the NHL Prospect Tournament at Centre Ice Arena in Traverse City. 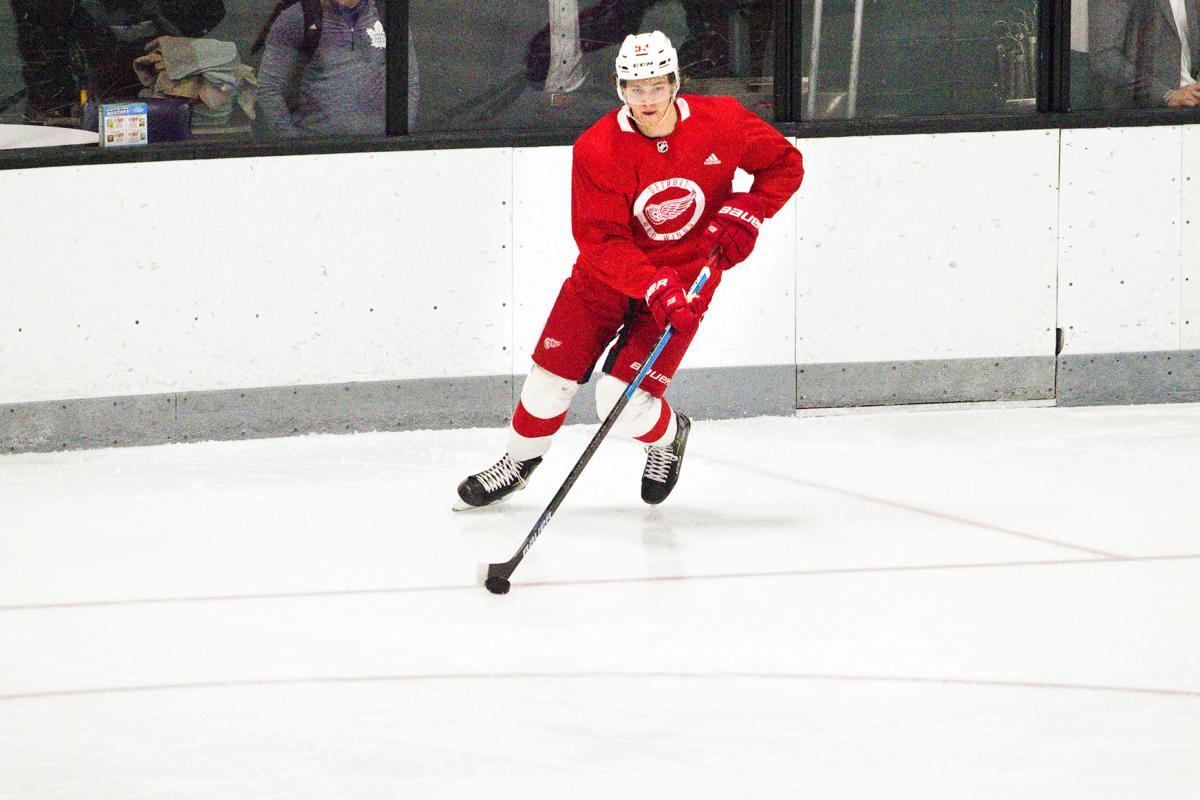 Defenseman Moritz Seider skates with the puck in a drill during the first day of the NHL Prospect Tournament at Centre Ice Arena. in Traverse City.

Defenseman Moritz Seider skates during the Detroit Red Wings practice on the first day of the NHL Prospect Tournament at Centre Ice Arena in Traverse City.

Defenseman Moritz Seider skates with the puck in a drill during the first day of the NHL Prospect Tournament at Centre Ice Arena. in Traverse City.

TRAVERSE CITY — Moritz Seider is the highest drafted German defenseman of all time.

The Detroit Red Wings selected Seider with the sixth overall pick in the 2019 NHL Entry Draft, marking the second year in a row the organization nabbed one of the top prospects in the draft.

Seider, who turned 18 on April 6, was as surprised as the rest of the National Hockey League when Detroit chose him at No. 6 but that doesn’t mean he doesn’t belong.

The fundamentally sound defenseman won Rookie of the Year honors in the Deutsche Eishockey Liga (DEL), the top professional league in Germany, and helped lead Adler Mannheim to back-to-back league championships. He was the top point-producing defenseman in the 2019 IIHF World Junior Championship Division IA, where he captained his team to a title.

Seider and dozens of other prospects are ready to showcase their talents in the 21st NHL Prospect Tournament that is taking place at Centre Ice Arena this week.

“It’s a great opportunity to present yourself to the world,” Seider said. “I think it is one of the best tournaments I have played in so far. It is a huge honor for myself to have the Winged Wheel on my chest and represent it everyday.”

The 6-foot-3, 207-pound defenseman shined at the Red Wings development camp with his hockey sense and tough play on the ice but his personality and leadership caught the eye of many.

This weekend offers a chance for Seider to showcase all of those talents in hopes of impressing the front office and coaching staff and he plans to take full advantage.

“I just want to show my skills and my personality,” Seider said. “On one side is being a great guy on the ice but on the other side you have to have great character. I hope I can combine both and accept my role and maybe even lead the way while I am here.

“You want to be one of the best and that is why I am here, I want to perform.”

His performance in Germany was good enough to earn that ROY honor despite appearing in only 29 games due to a shoulder injury.

Although this is his first time playing with these teammates and on the smaller NHL rink, Seider isn’t focused on the changes or the pressure.

“But in the end it’s hockey, you have your abilities to make plays and nothing changes. I should be fine and it will be fun.”

Brad Simon, the head coach of the Grand Rapids Griffins, is using this time to evaluate his top prospects and Seider will be under a close watch. Simon has not had the chance to see Seider play in person until this weekend and is looking for a lot out of the young talents.

“You only see them on TV and clips from the draft and everything, but I don’t know them intimately,”Seider said of the fresh faces. “To see them on the ice here and to see them compete and go through practices to get to know them is good. They did a good job drafting and now it’s our job to develop.”

For Simon, a young talent like Seider may have been picked at the top of the draft, but he still has to prove himself during the NHL Prospect Tournament.

“It’s not about what he has done in the past,” Simon said. “It’s from day one when they get here ‘til the end of the week. Have they learned anything or gotten better? Have they gotten to know their teammates and to know and understand our systems?

“For them, it’s their first time being here. We had development camp but now there are games and it is more of an evaluation than a growing tool. They are going to be thrown into situations and they have to prove themselves.”