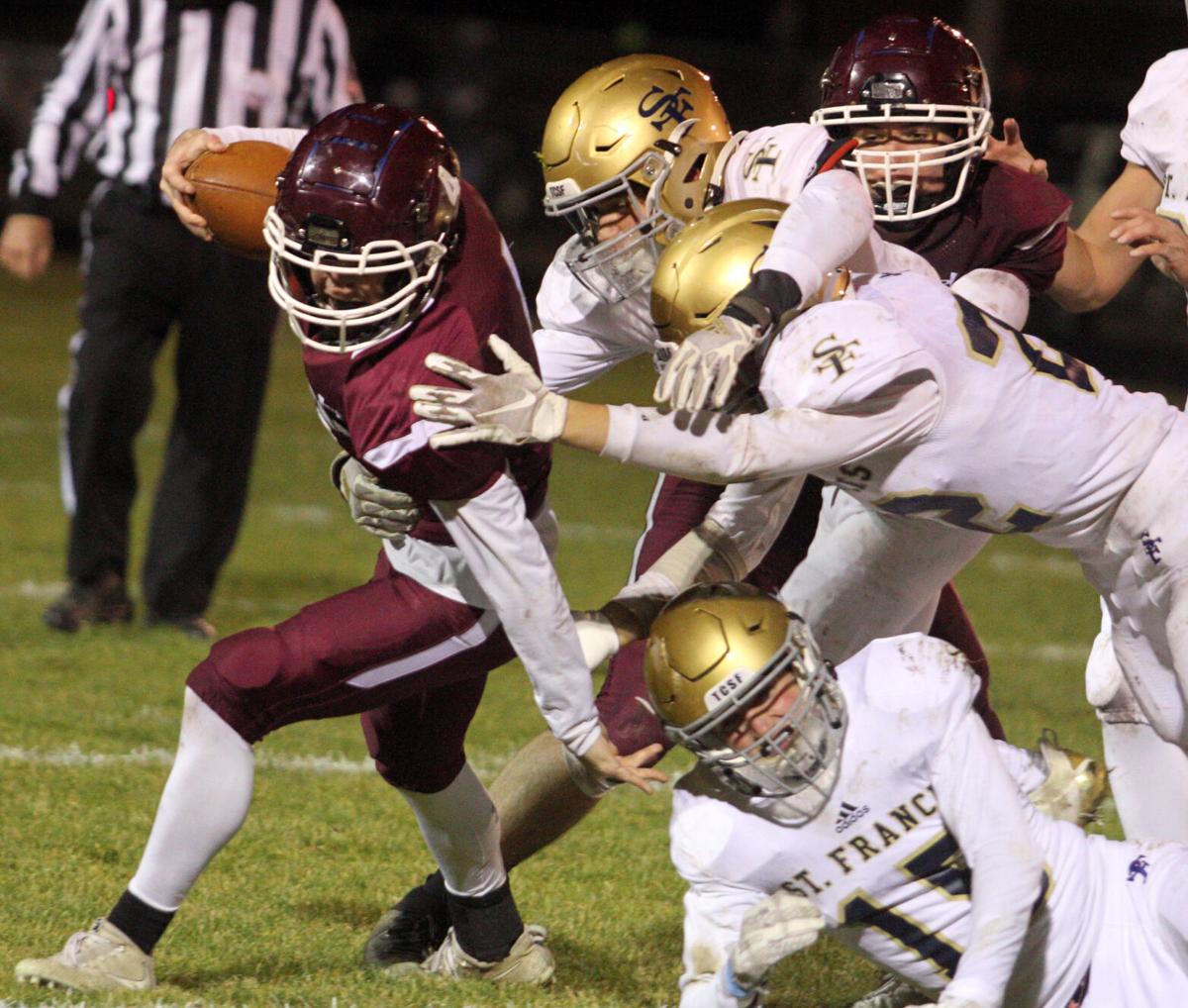 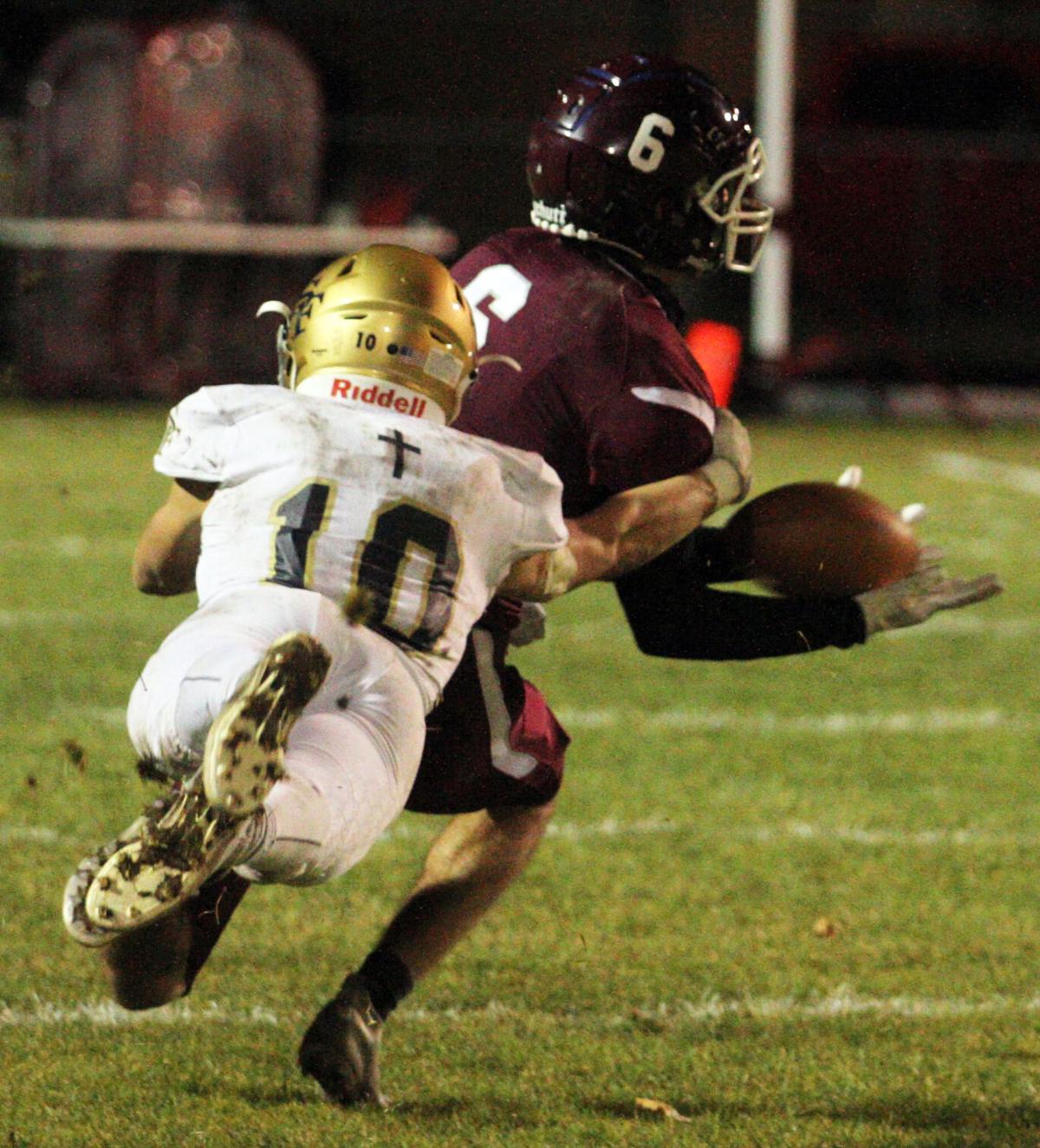 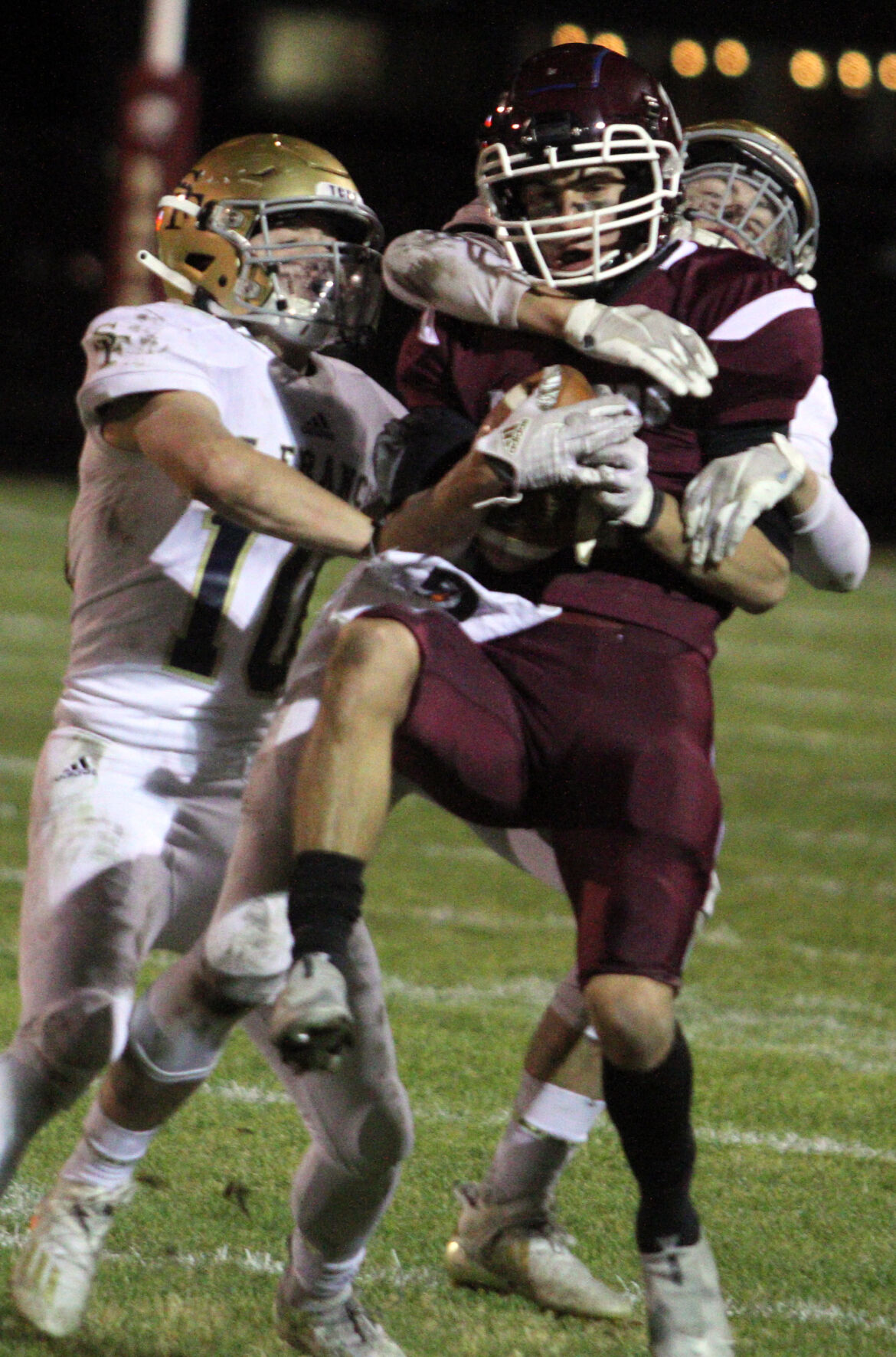 The victory gives the Glads a home game next week against undefeated Oscoda (9-0), which beat Evart 38-35.

“We’re 3-0 on the road and it’s a better record than we’ve had our home field,” Gladiators senior running back Owen Mueller said. “It’s going to be fun to play at home, but there’s something fun about going on the road in my opinion.”

“Our kids played hard,” Rayders head coach Don Jess said. “They certainly don’t have any reason to hang their heads. Give a lot of credit to our seniors. That’s two really good years for our program. They certainly put in the hard work.”

The Rayders (8-1) put up 15 victories, including the program’s first three in the playoffs, over the last two seasons.

“I’m happy with being able to put up 44 points on this team — they (Charlevoix) had given up less than 60 this year,” TCSF head coach Josh Sellers said. “So we’re happy with that offensive performance and we’ll learn from the mistakes we made defensively. We’ll have to get better or we go home.”

St. Francis’ defense turned things around in the second half as well, going from allowing 32 first-half point to none the rest of the way. Joey Donahue led the defensive effort with seven tackles, five of those for loss. Josh Groves added eight stops, Gavin Nickodemus six and Casey Donahue five.

Luke Biggar came up with a big play, arriving at the same time as the ball on a pass to Evan Solomon to break up a fourth-down throw that would set up the game-clinching score.

“We knew once we got in the locker room that we had to come out and play better,” Gladiators senior running back and linebacker Aidan Schmuckal said. “We were playing not as well as we should, and it showed.”

“It’s nice to come on to someone else’s field and execute better than them,” Schmuckal said. “We are never out of a game. We just have to set our minds to it and we can come back from anything.”

Stuck completed nine passes for 136 yards and two TDs, while running 15 times for 118 yards and three two-point conversions as the Rayders capped off every TD they scored with a successful conversion try. Luke Snyder ran for 46 yards and two TDs and Ethan Putman and Phil Sterrett combined for 39 rush yards.

Charlevoix is 4-23-1 against St. Francis all-time, but the Rayders did score double-digit points against the Gladiators for the first time 2007.

Charlevoix accomplished that in the first quarter alone.

The Rayders started the game with an onside kick. That backfired a bit, as the Gladiators recovered and used a short field to score four plays later on a Schmuckal 24-yard run. Brice Kempf kicked the extra point for a 7-0 lead.

Charlevoix would score the next three times it touched the ball, taking advantage of a muffed punt and fumble recovery to set up a 35-yard TD pass to Evan Solomon and Ethan Putman conversion.

Snyder recovered a blocked punt after a St. Francis three-and-out and ran it in from 21 yards out three plays later on a Stuck pass. Stuck’s two-point conversion run made it 16-7. St. Francis put together a 12-play drive that ended with a Phil Sterrett pass break-up on fourth down. Stuck’s 75-yard keeper set up a Snyder 5-yard TD run for a 24-7 Rayder lead with 20 seconds left in the first quarter.

“We knew that they were a really solid team,” Mueller said. “It shows with their record 8-0. But I don’t think we ever doubted ourselves. We knew that we’d come out on top.”

St. Francis responded with back-to-back scoring drives, resulting in a 6-yard Mueller TD run and 40-yard Mueller run up the right sideline. Gabe Olivier converted one and Wyatt Nausadis the other to pull the Glads within a point.

The game was heating up, both figuratively and literally.

Temperatures sunk below freezing by kickoff, but went up to 36 degrees in the second quarter as both offenses found their groove.

“The offenses were both working, that’s for sure,” Jess said. “One break there at the end could’ve made a big difference, but that’s football.”

Snyder’s second rush TD, this one from 3 yards out, gave the Rayders a 32-23 lead after Stuck’s conversion run. TCSF countered with Mueller’s third rushing TD of the night, from 7 yards out, and a Peterson conversion run to make it 32-21 in Charlevoix’s favor at the intermission.

“First half I think defensively, we just had a lot of of individual efforts,” Mueller said. “But there were guys that were getting confused and not doing their jobs, so we really had to clean that up at halftime and we did pretty well.”

St. Francis did all the second-half scoring, as Peterson scored on a 1-yard QB sneak for St. Francis’ first lead at 5:12 of the third quarter and Schmuckal lunged in from 7 yards with 2:16 to all but salt away with win.

“We didn’t make silly mistakes the second half like we did in the first half,” Sellers said. “We limited our mistakes and we made plays when we needed to make them.”

Nausadis rung up 52 yards on two punt returns, but left in the fourth quarter with a hip flexor injury.

Leland forced to opt out of playoffs