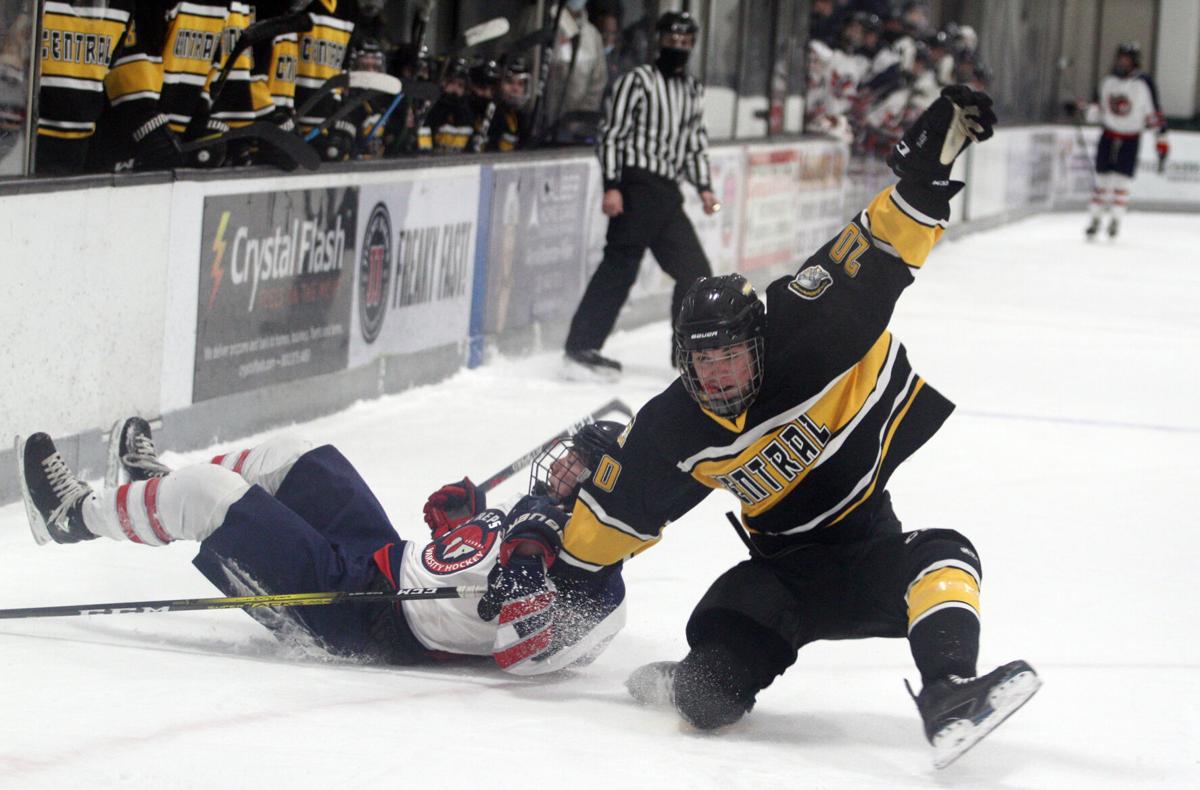 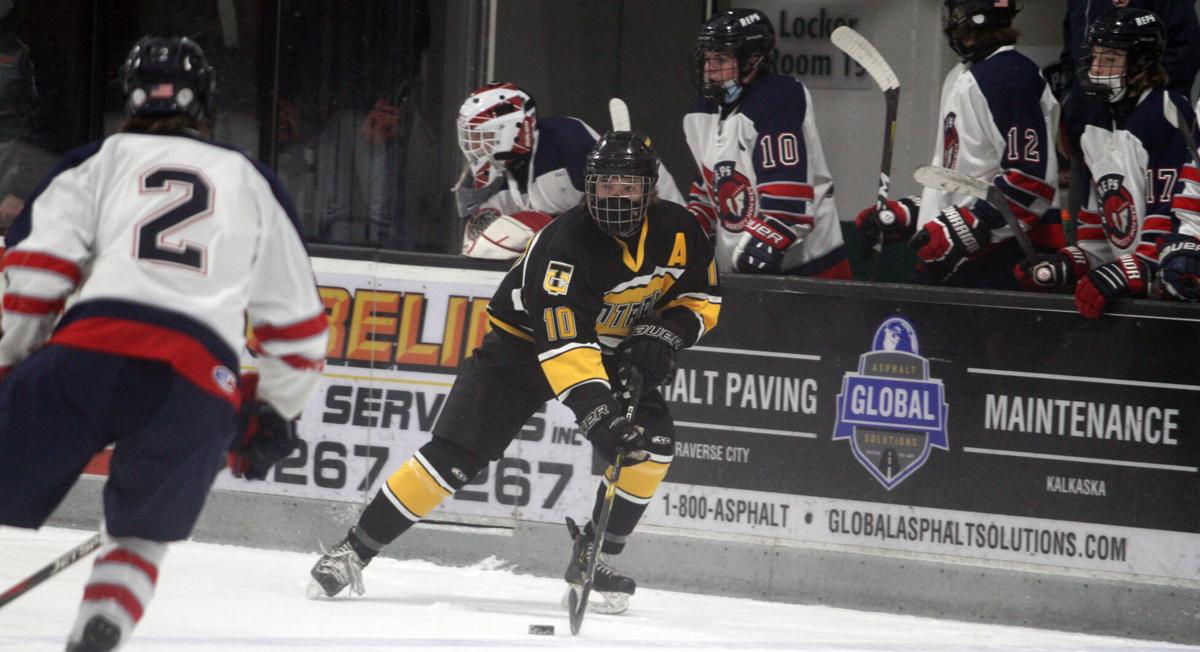 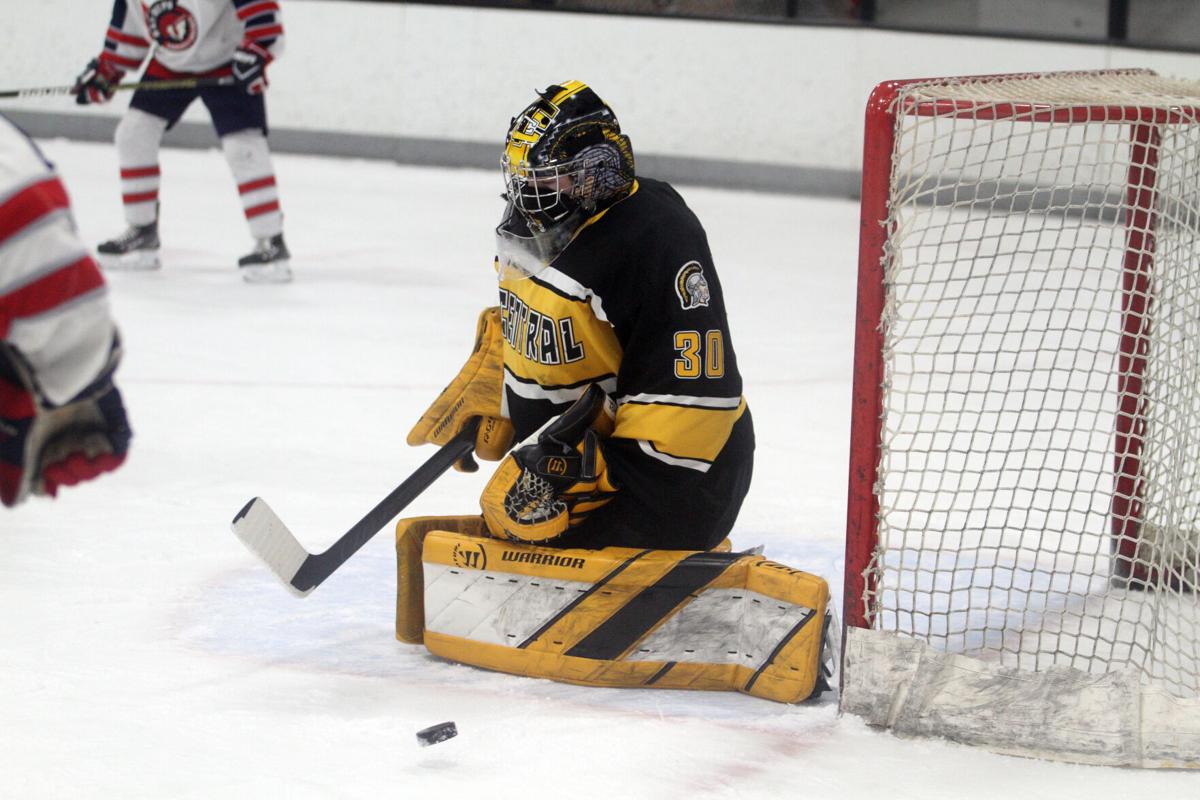 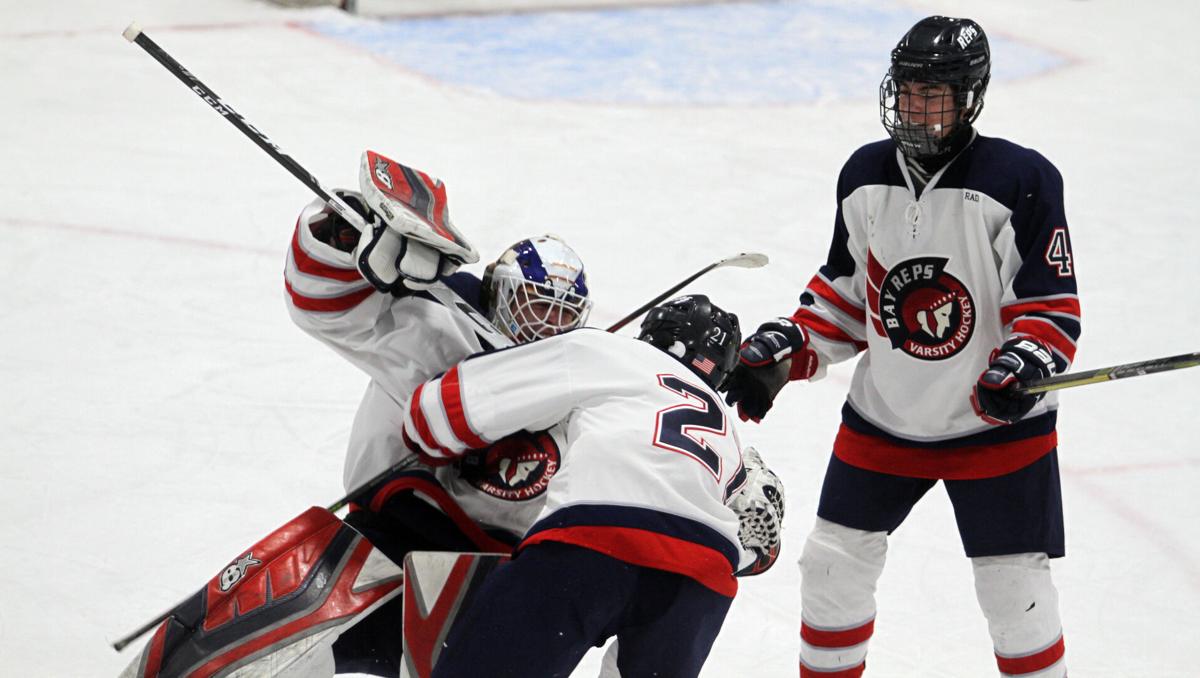 That’s not to say Traverse City Central didn’t pepper the Bay Reps goaltender with 30 shots, but the hit Kaleb Miller put on the goalie amid a postgame celebration certainly packed a punch, bowling Lawson over.

“I knew we’d both be really excited,” Lawson said following a 3-1 victory in Wednesday’s nonconference hockey game at Centre Ice Arena. “We both wanted it real bad.”

Miller and Lawson, two of the team’s eight seniors, get to go out with a winning 3-2 record against TC Central, which won 6-4 last season in a Saturday night contest, with the Reps shutting out the Trojans 4-0 the previous year. They split two games in the 2017-18 season.

“I’ve been wanting to beat those guys,” Lawson said. “We beat them my sophomore year. It was a tough loss last year, but we really wanted it today. We outworked them. They played a great game and we came out on top.”

Central didn’t make it easy, though.

The pair of top-10 ranked teams played mostly even over the last two periods, including a several Reps penalties that kept Central on a six-on-four power play for the game’s final 54.5 seconds.

“That was easily the longest period of my life,” said Lawson, who finished with 29 saves. “Towards the end there it got a little scary there.”

The Division 1 No. 6-ranked Reps (4-0) took a 2-0 lead in the first period. Tyeson Griffore, one of two Mancelona players on the co-op team, put the Reps ahead 1-0 on their first shot on goal, rebounding a Miller shot past Central’s Grant Neuhardt, who made 18 saves.

“Both teams made some mistakes, but both teams did good things, too,” Reps head coach Mike Matteucci said. “It’s always fun to be part of this game because all these kids know each other. But I was telling the guys it’s mid-February, and at this time last year we were in mid-season form, getting ready to get into the playoffs, everything was sound and we were sharp. There’s still a lot to work on. It’s been a weird, off year.”

Ben Polomsky then put the Reps up 2-0 with a power play goal set up by Miller and Will Fournier.

Owen Dawson put the Division 2 No. 8-ranked Trojans (2-1) on the board with a power play goal at 12:26 of the second period off Ethan VanderRoest and Hunter Folgmann assists.

“We couldn’t put two passes together,” TC Central head coach Chris Givens said. “It was frustrating because we couldn’t handle the puck, couldn’t pass the puck, we didn’t have a lot of jump. ... But give the Reps credit. They played hard all night right from start to finish and Judd Lawson had a great game. That’s probably one of the best games I’ve ever seen him play.”

Givens said he’s just glad the Trojans are back on the ice, after the season was shortened to just five weeks because of COVID-19 shutdowns.

“That was a rough few months,” Givens said. “It’s just nice to be back at the rink and at least have this somewhat normalcy back.”

Gabe Classens’ rebound goal off an Aaron Ackerson assist finished off the scoring with 4:55 remaining to put the Reps up 3-1.

The Reps travel Friday to Saginaw Heritage — the team that knocked them out of the semifinals two seasons ago — while the Trojans head Friday to league foe Alpena.

Cody Cejda, a Kingsley graduate and former Stags’ football player, was hired as the Special …