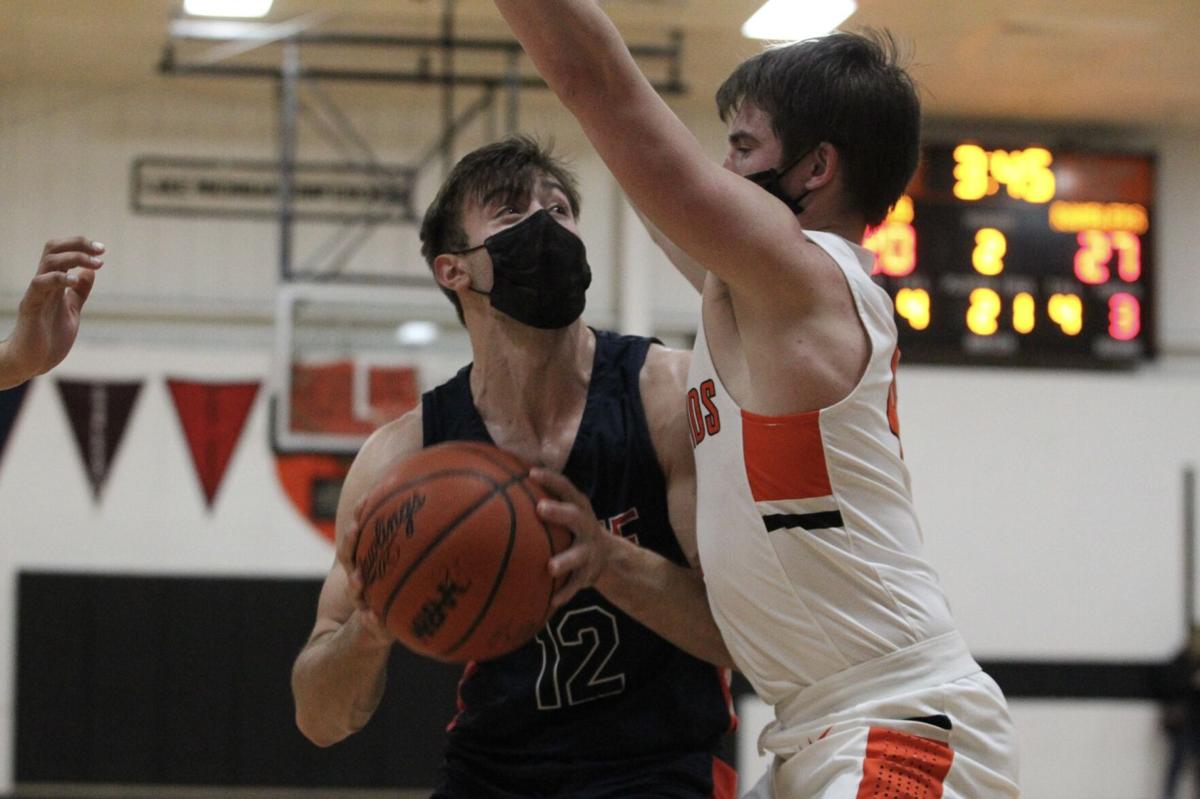 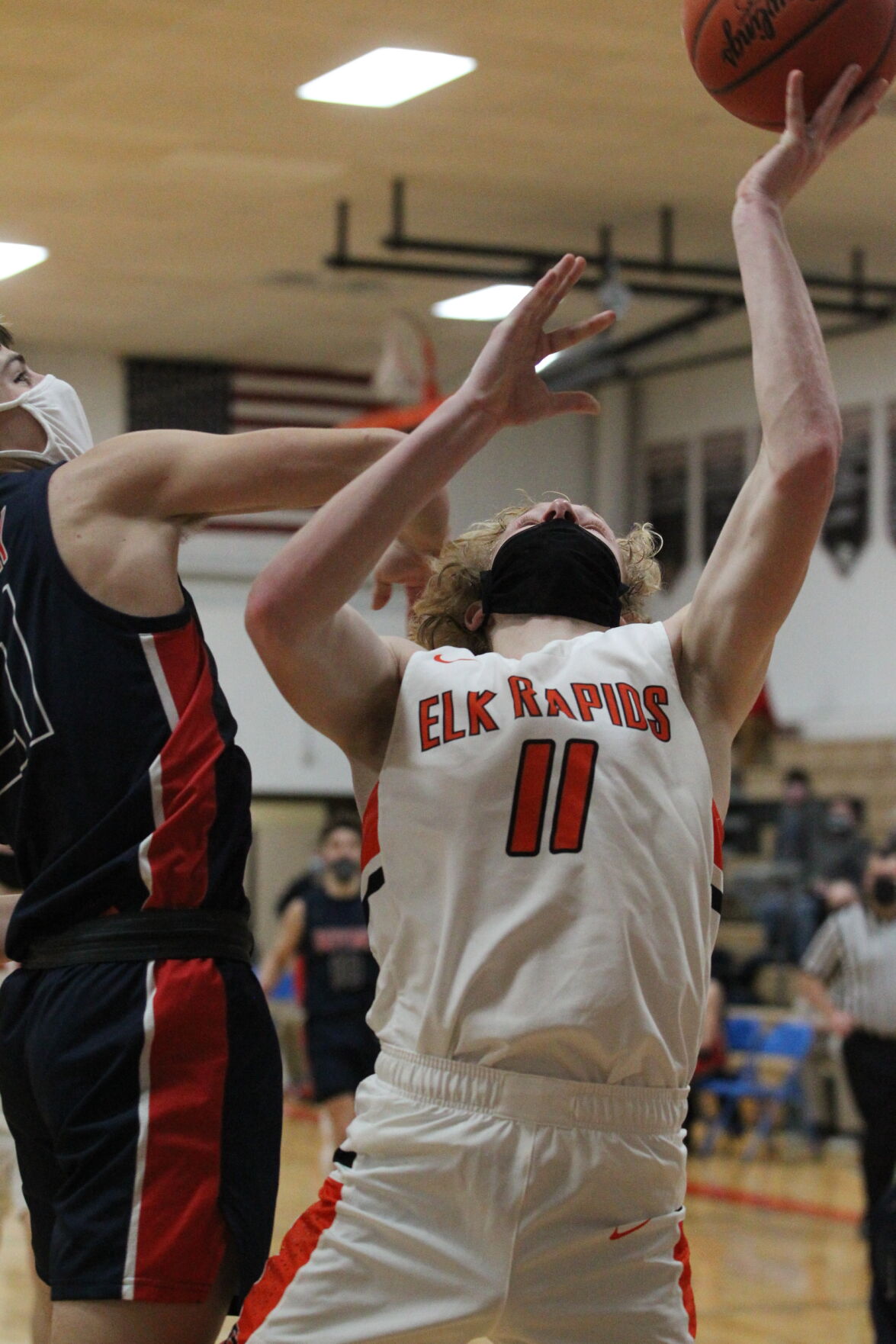 Elk Rapids’ Mason Travis goes up for a layup during the Lake Michigan Conference game against Boyne City Friday in Elk Rapids. 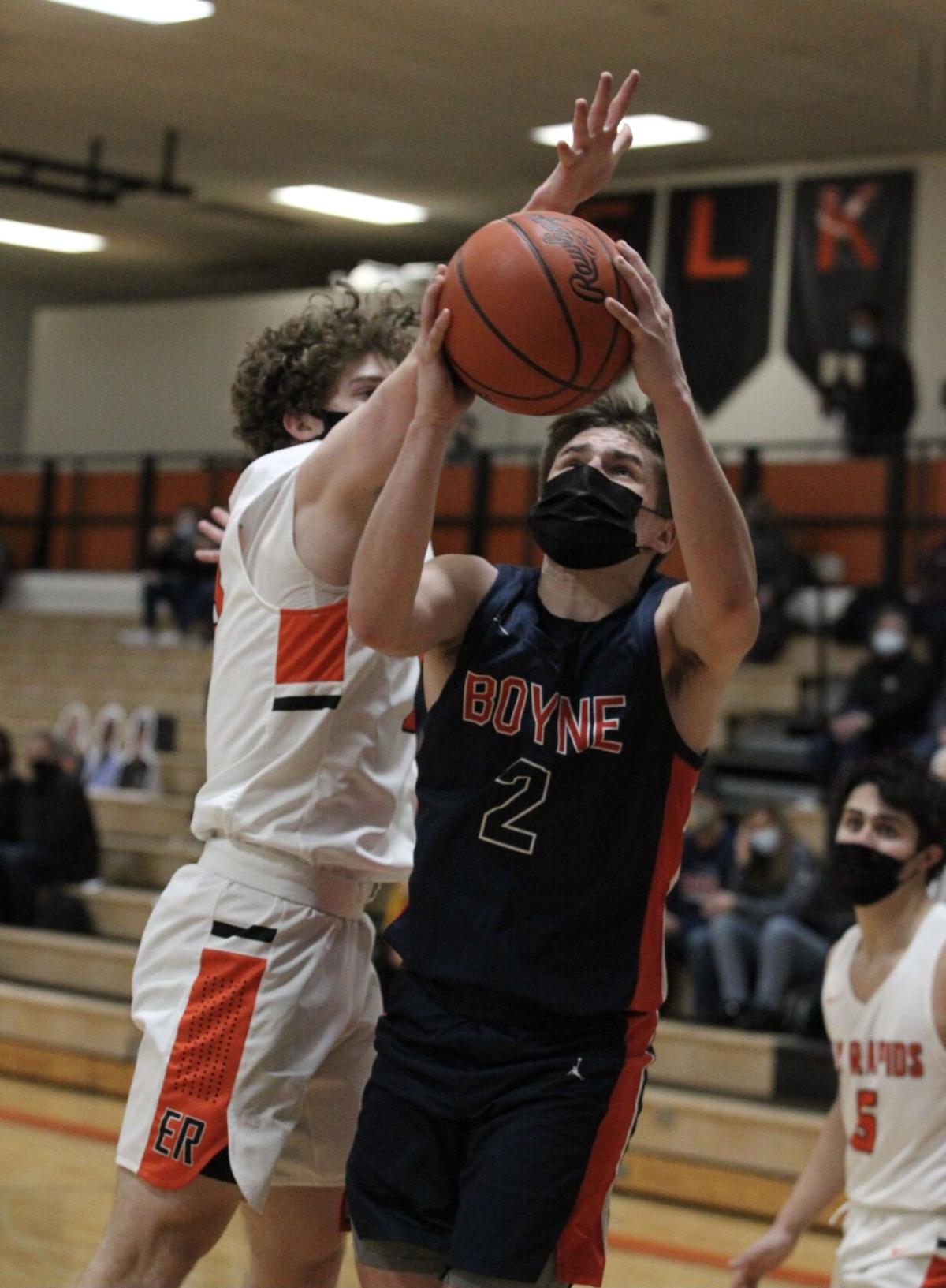 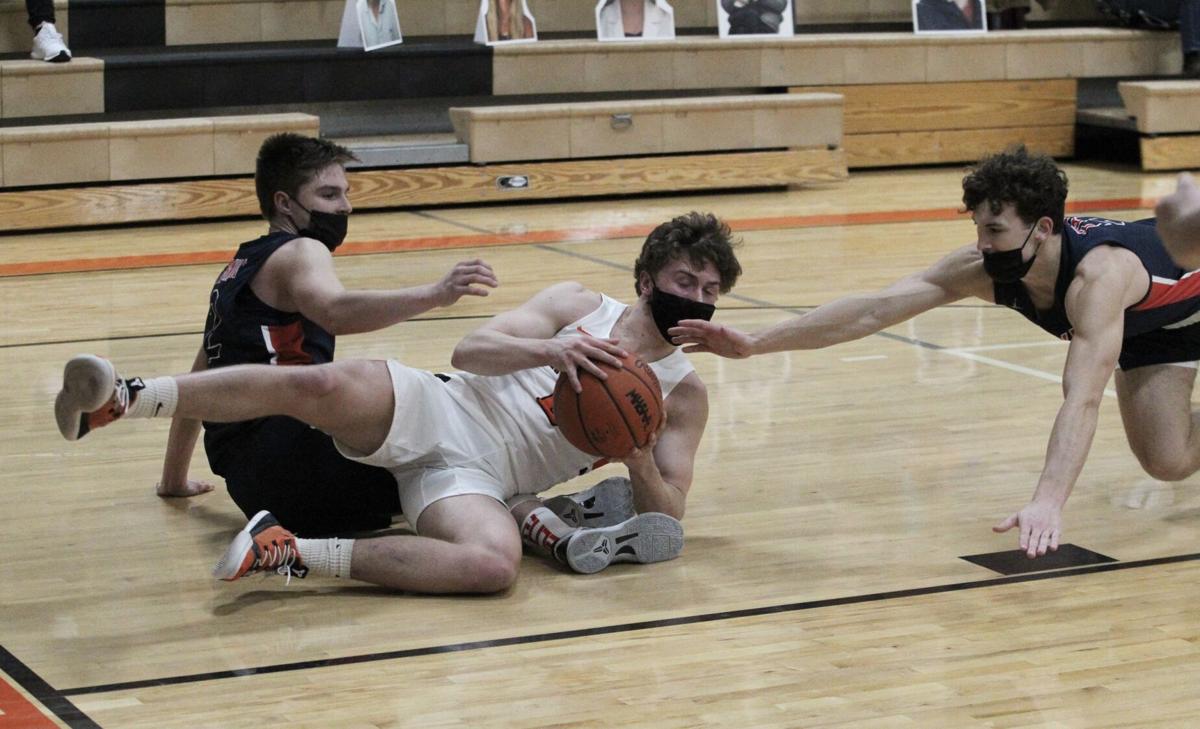 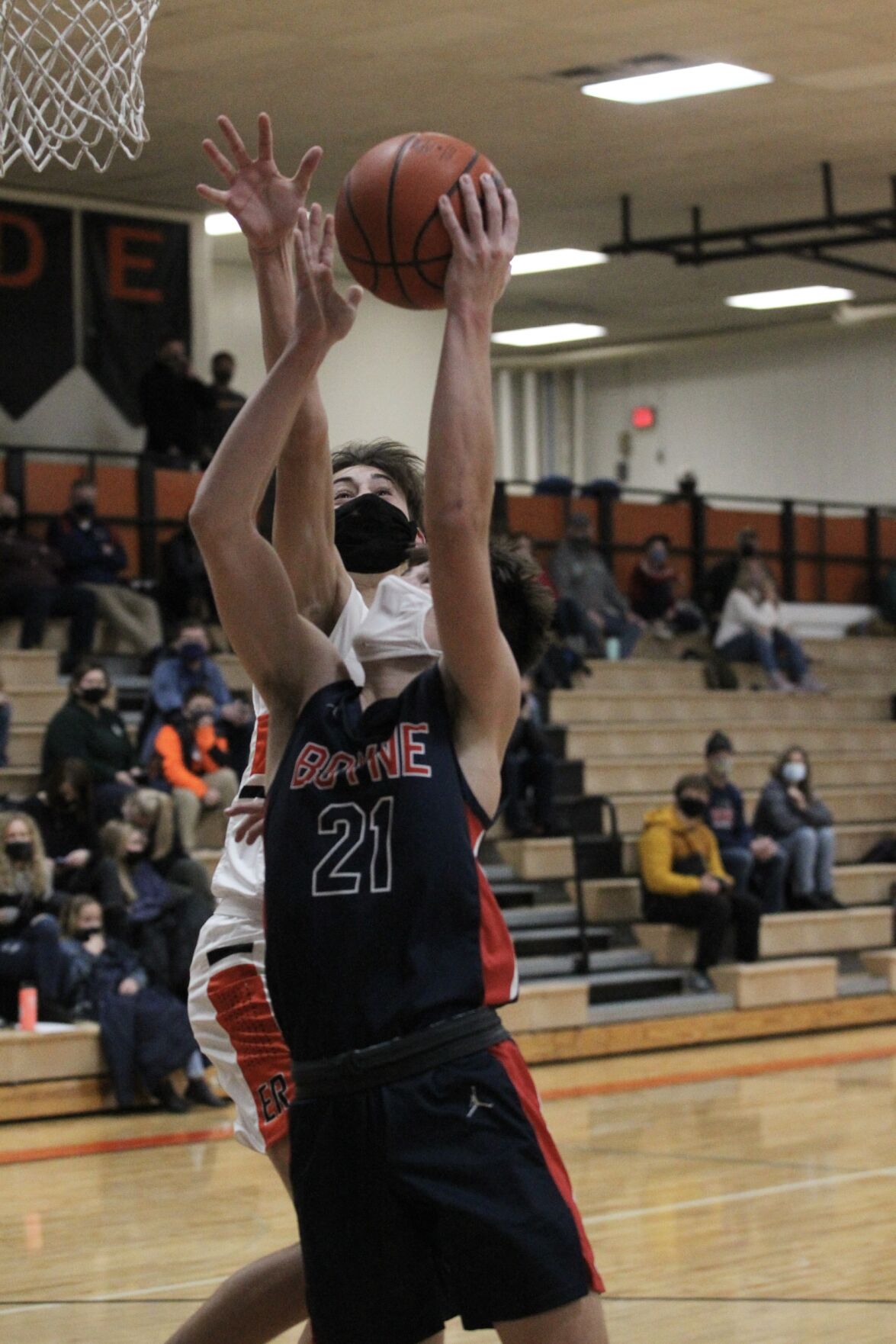 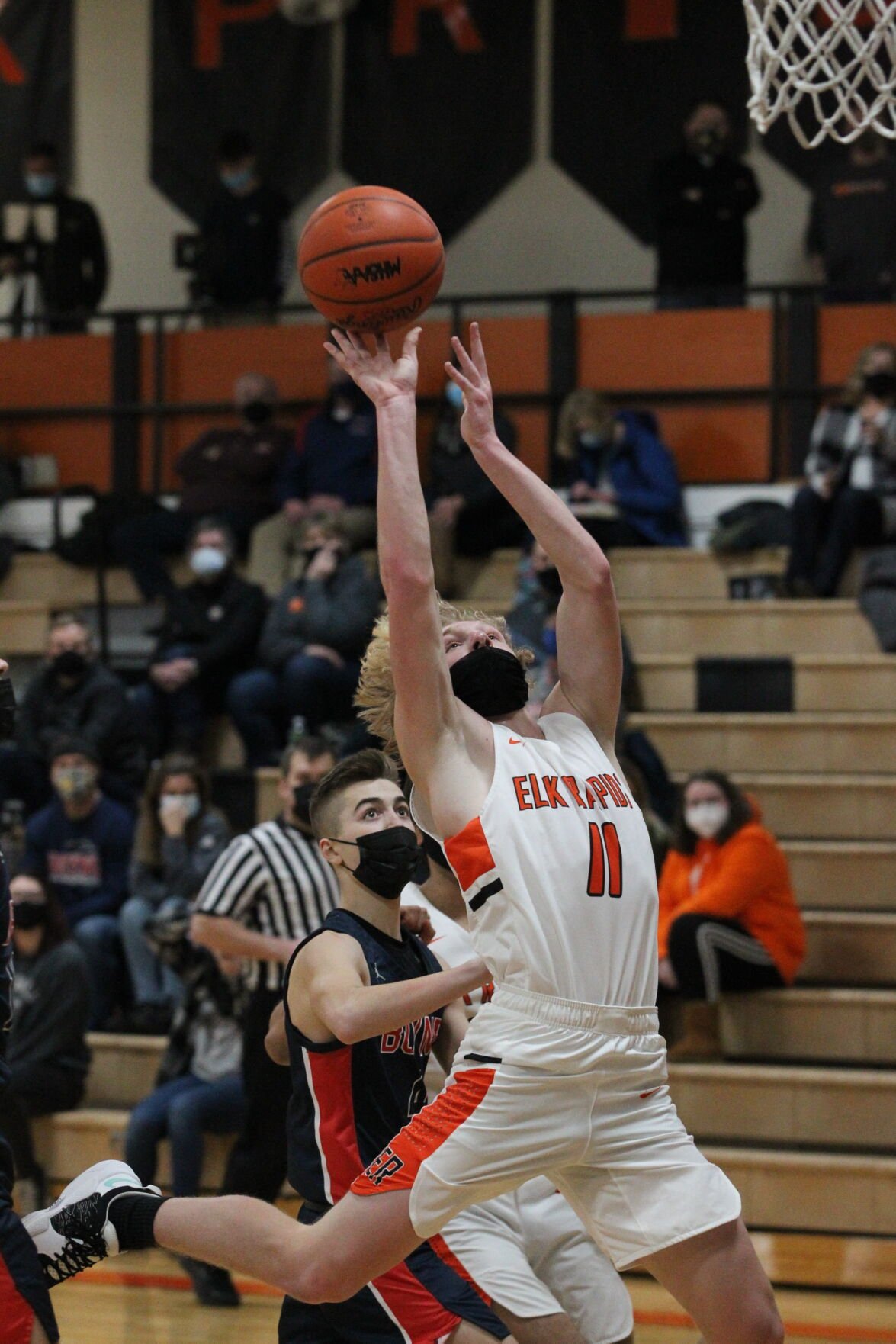 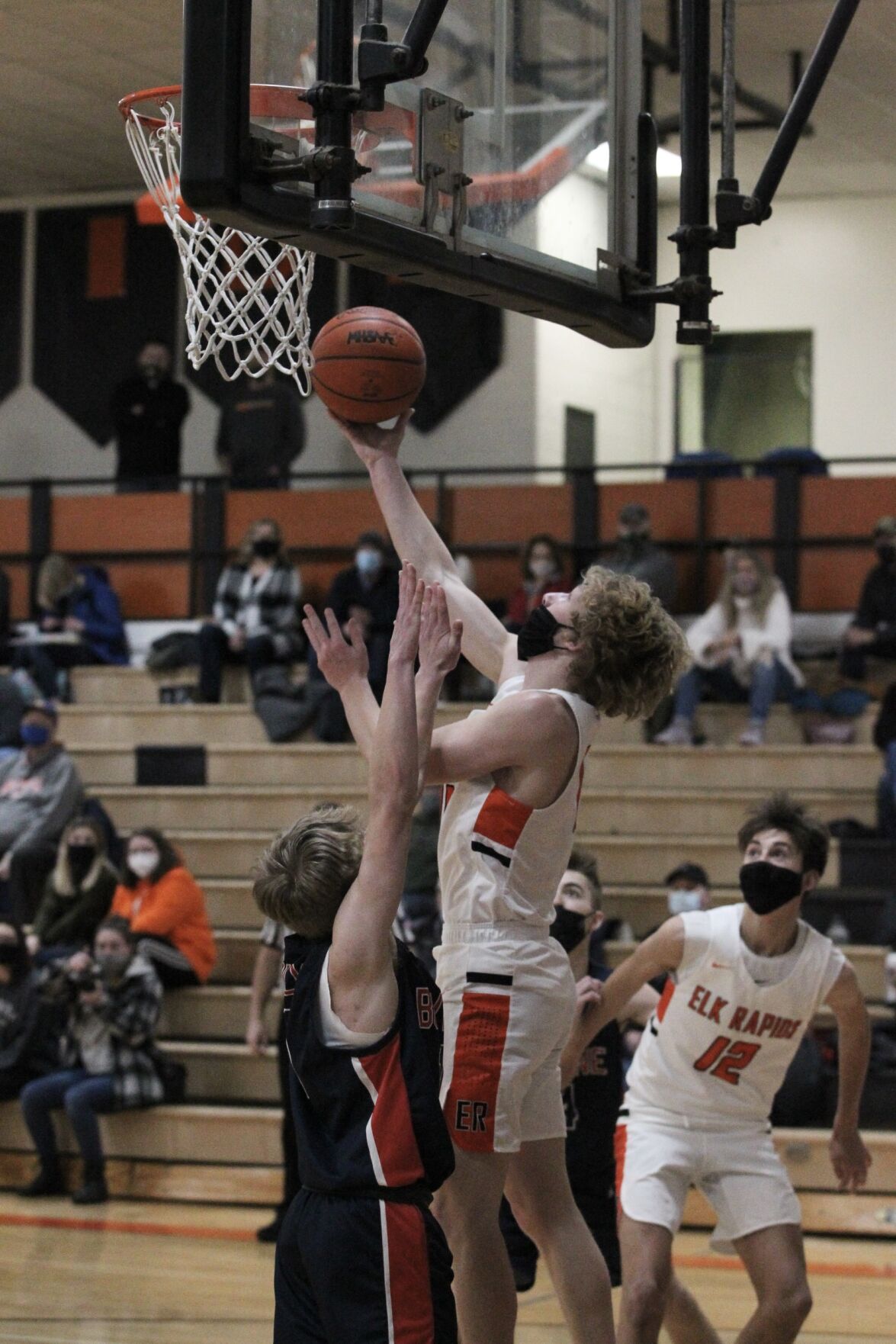 Elk Rapids’ Mason Travis goes up for a layup during the Lake Michigan Conference game against Boyne City Friday in Elk Rapids.

ELK RAPIDS — Get better every day.

A motto Boyne City boys basketball head coach Randy Calcaterra has given his team for a season already filled with adversity.

The Ramblers showed more than a few signs of improvement Friday with a 59-51 Lake Michigan Conference victory over Elk Rapids.

“We finished,” first-year coach Calcaterra said. “When the adversity and a couple of calls didn’t go our way Wednesday we crumbled and the lead bubbled We didn’t do that today.”

Boyne City was in a tight game with TC St. Francis on Wednesday and let a 14-0 run happen late that led to its demise. The Elks broke off a 9-0 run in the fourth quarter that the Ramblers needed to weather, showing the growth that Calcaterra and his senior leader Aiden Brehm were looking for.

“I’m so proud of these guys, they are a young group of guys just showing so much heart and so much want to win,” Brehm said. “This is a really proud moment for me.

“Early in the season without much practice time it is easy to get caught up in the emotions and in the speed of the game. I just keep telling the guys to play their game and try to be that person for them to lean on.”

Brehm was the senior the Ramblers leaned on as he finished the game with 12 points and was called on to close out the game with clutch free throws. Brehm knocked down a couple of free throws that shut down the Elks chances in the final minute of play.

Kadin Patterson started the game for the Elks scoring six of the first 11 points that led to the 11-9 lead that would be the last they held. After taking a 12-11 lead off an Alex Calcaterra 3-pointer the Ramblers began a barrage from downtown that made the gap too large for the Elks to close.

The Ramblers entered the second quarter up 17-13 before draining four shots from deep, and closed it with three free throws from Alex Calcaterra after he was fouled on a late shot attempt. Brehm opened the quarter with a shot from deep, Gavin Hewitt drained one, Neer found the net from downtown and Kolton Stadt landed from downtown as six different Ramblers hit a 3-point shot.

The 36-22 halftime lead fed into a slow third quarter that saw 13 total points. The Elks waited until the final stanza to turn on the heat when Patterson sparked that 9-0 run with back-to-back fast break buckets followed by a 3-pointer from Preston Ball that lit up the Elk Rapids gymnasium.

The Elks press was trouble for the Ramblers early in the game and late in the fourth thanks to the tenacity of Ball, Patterson, Mason Travis and Gordie LaFontaine, who combined for nine steals.

“I think the fourth quarter we showed what our potential is,” Elks head coach Kevin Ball said. ”We just waited too long to do it and I’m proud of the guys for fighting back and get within four, and give themselves an opportunity.”

Travis had 10 points and four assists with three steals. Elk Rapids was missing Spencer Ball, one of its top defenders, because of COVID-19 quarantine.

“I thought down the stretch that fourth quarter the way we played defense was great,” Ball said. “We ran a couple good sets. I’m calling it baby steps.“

Neer led the Ramblers with 13 points followed closely by Brehm with 12. Hewitt and Alex Calcaterra each netted 10 points to add to the balanced Boyne City attack.

Calcaterra said he is proud of his team for the growth because they play four of their hardest games this season in the first seven days. Boyne will play Petoskey next before taking on Grayling and Elk Rapids again next week.

“It’s gonna make you better,” Calcaterra said. “Like it or not, you’re gonna have to fight through that and that’s what we had to do today and we’re thrilled with the result.”

TRAVERSE CITY — Wrestling coaches across the area have differing styles, but all agreed on one thing Saturday.