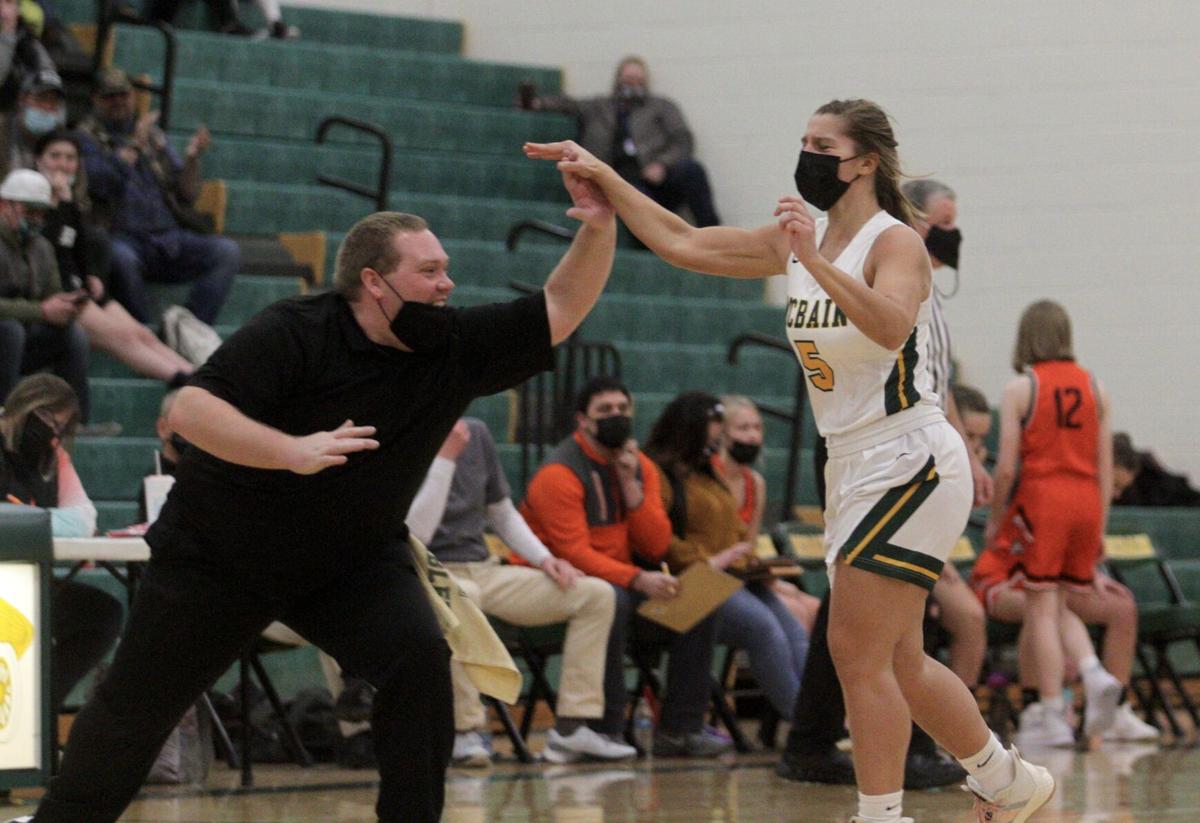 McBain head coach Drew Bronkema (left) celebrates with junior Mya Eisenga after she hit a buzzer-beater to end the first half against Manton Friday in McBain. 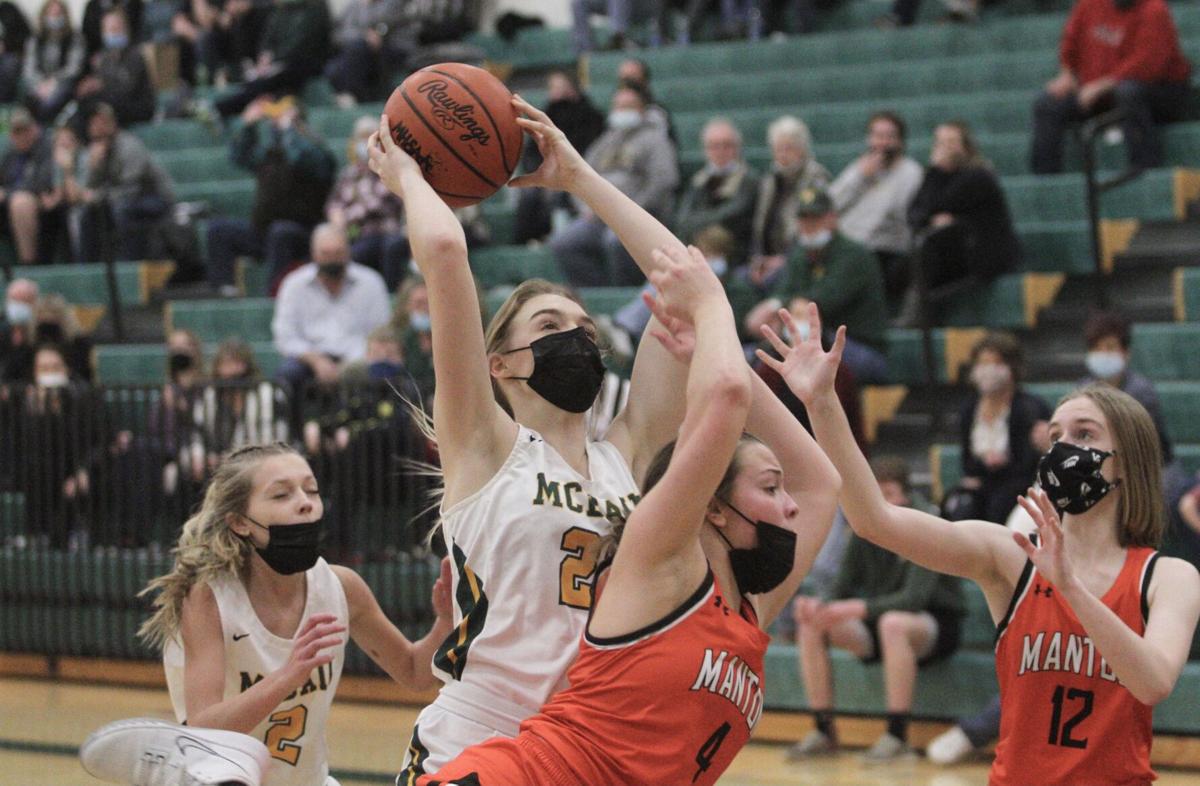 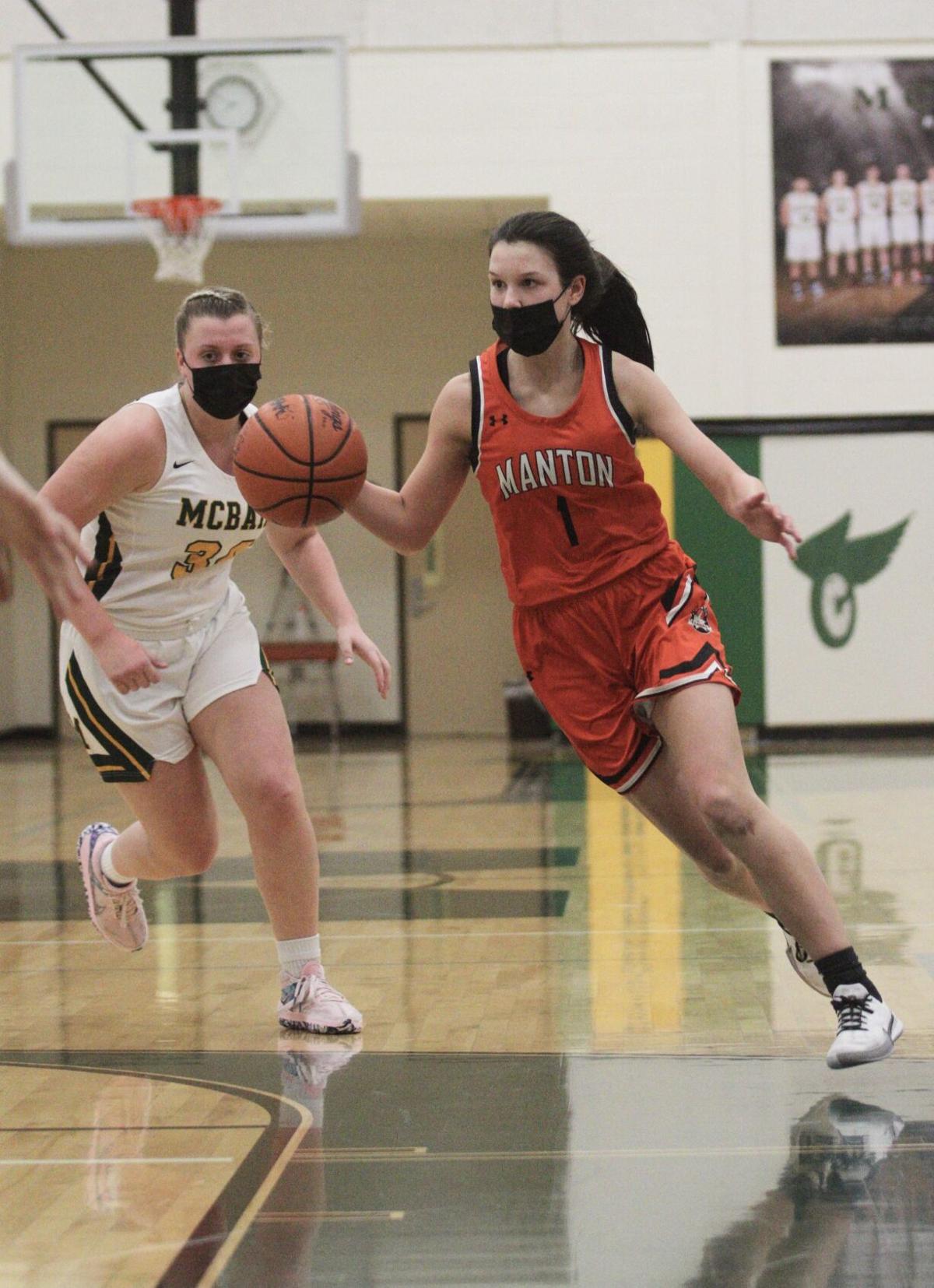 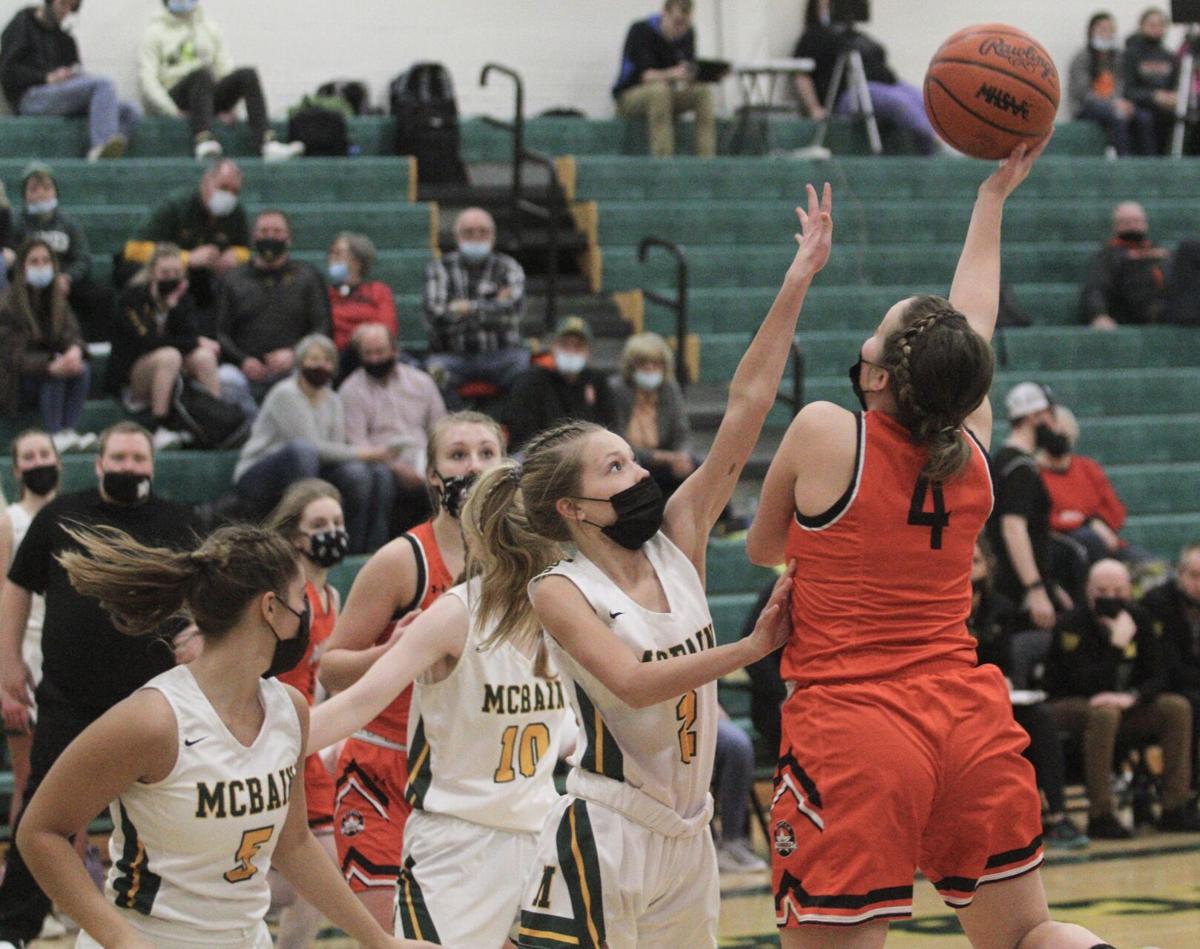 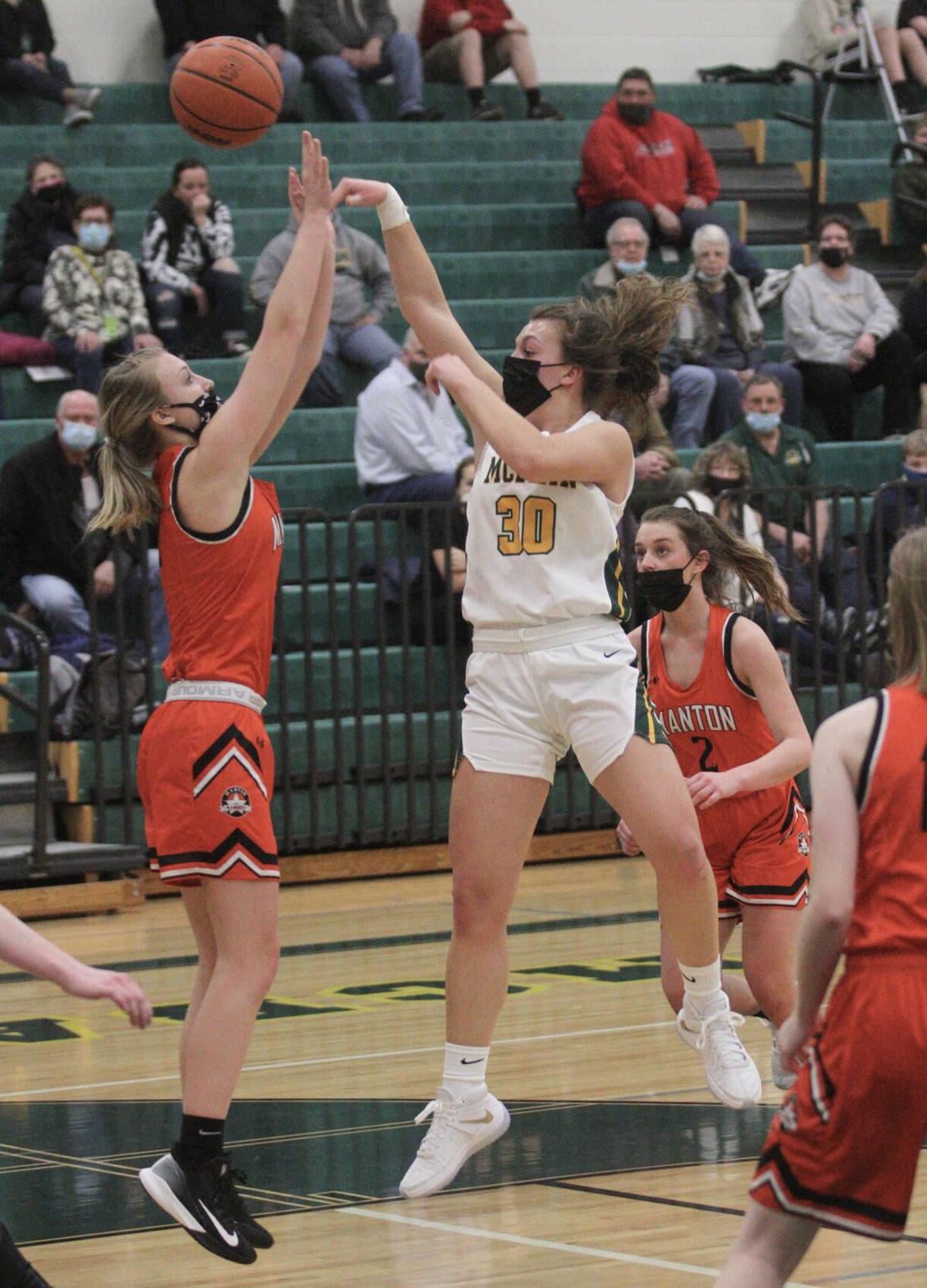 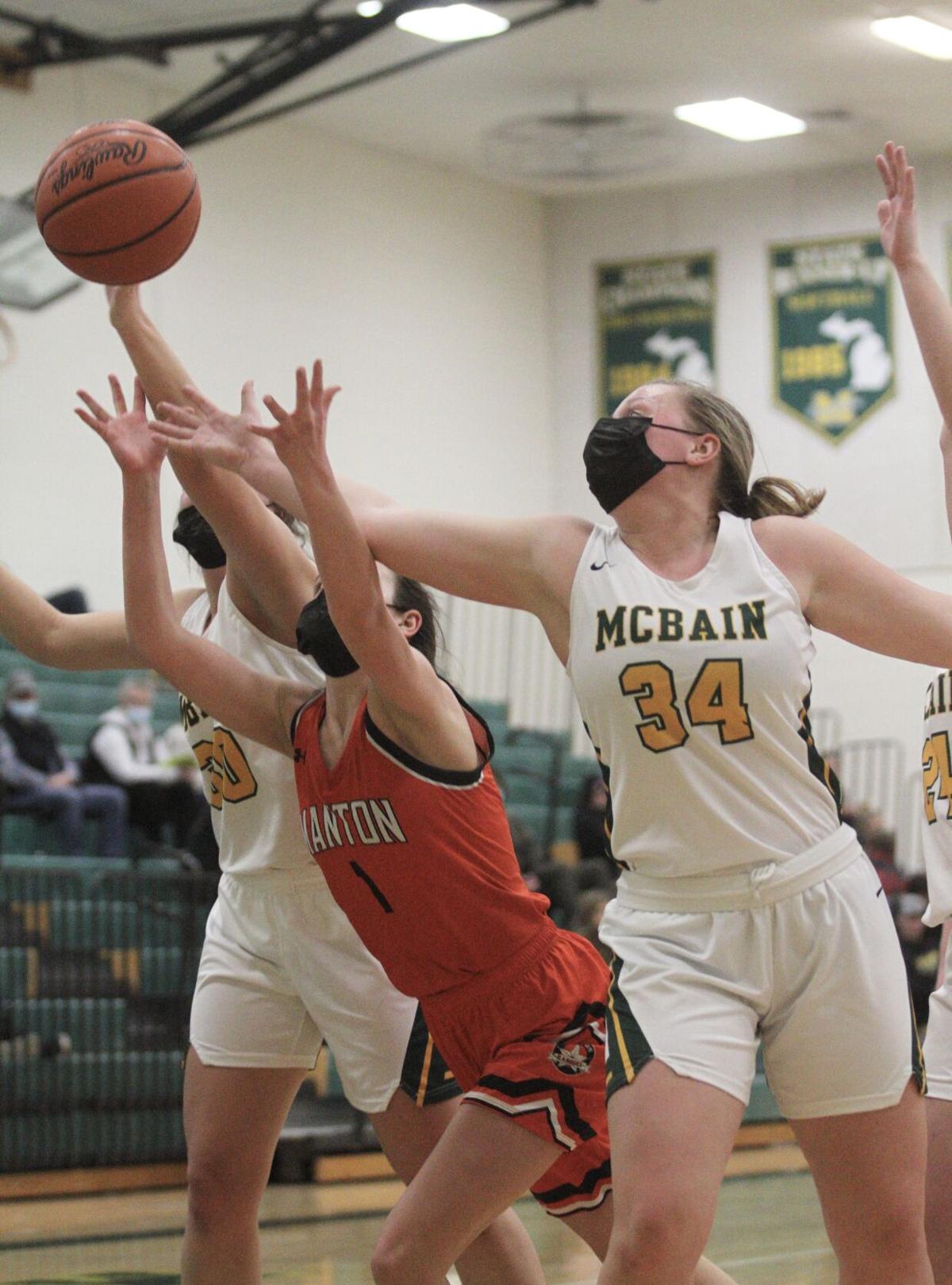 McBain head coach Drew Bronkema (left) celebrates with junior Mya Eisenga after she hit a buzzer-beater to end the first half against Manton Friday in McBain.

McBAIN — It took less than four minutes for Emma Schierbeek to let the entire McBain gym know she and the Ramblers meant business on Friday.

Schierbeek nailed back-to-back 3-pointers to begin yet another double digit victory for the Ramblers Friday when they defeated Highland Conference foe Manton 60-48.

The junior point guard started the evening hot from downtown and kept the ball rolling with five total makes from deep and 21 points to lead McBain over Manton and move to 7-0.

The Ramblers have won each of their seven games by at least 10 points, but head coach Drew Bronkema and Schierbeek both think they can do better.

“We’re doing really good but we are not playing our best,” Schierbeek siad. “I think we can be great. We obviously aren’t our best yet.”

McBain (7-0, 4-0 Highland) used the early barrage from Schierbeek to jump to a 9-2 lead they would never relinquish. Schierbeek netted eight points in the first quarter for McBain but Lauren Wilder, the Rangers’ freshman point guard, kept Manton in it with a buzzer-beating 3-pointer to keep the score 15-10 at the end of one.

Wilder battled back and forth with Schierbeek, getting the best of the Ramblers on many occasions. Wilder, the freshman phenom, totaled 30 points on the night, shooting 10-for-21 from the field and netting seven free throws for Manton.

“We had control from the start but we have to do a better job defensively for sure,” Bronkema said. “Their point guard is a nice player but to give up 30 points — most of those in the paint — is not who we want to be.“

McBain was able to double their lead in the second thanks to a heap of free throws and a buzzer-beating 3-pointer from Mya Eisenga that spread the halftime lead to 30-20. Wilder and Sam Powers combined for all 10 of the Rangers’ second quarter points.

Powers forced a steal for Manton when they began a full-court press and made a fast break bucket before being fouled and making two free throws to cut McBain‘s lead to 18-17. The Ramblers then went on a 12-3 run to close the half and take full control.

“We never gave up,” Manton head coach J.P. Katona said. “They have a couple of studs that hit some shots and that kind of just wrecked out momentum.”

The Rangers (4-2, 1-1 Highland) were unable to get back within 10 points after halftime as Olyvia Nederhood and Schierbeek started nailing more shots from outside. Nederhood finished with 10 points for McBain.

“We did respond and that is what we base ourselves on,” Bronkema said. “We are going to get punched in the mouth and we have to respond in a positive manner.

“We’re not playing our top ball right now but all seven games we have found a way to win, which is huge. We’re excited to see where we could get if we all click at the same.”

The Rangers went 11-for-22 from the free throw line as a team, an area Katona said needs work if the Rangers want to compete later in the season. Wilder finished with 30 points, three assists and two steals and Powers had seven points.

The Ramblers will host Mason County Eastern on Monday while the Rangers host LeRoy Pine River.

TRAVERSE CITY — Traverse City Central made the most of a busy Saturday slate and sent two teams home contemplating a loss.

MANTON — When life hands you lemons, install a full-court press.