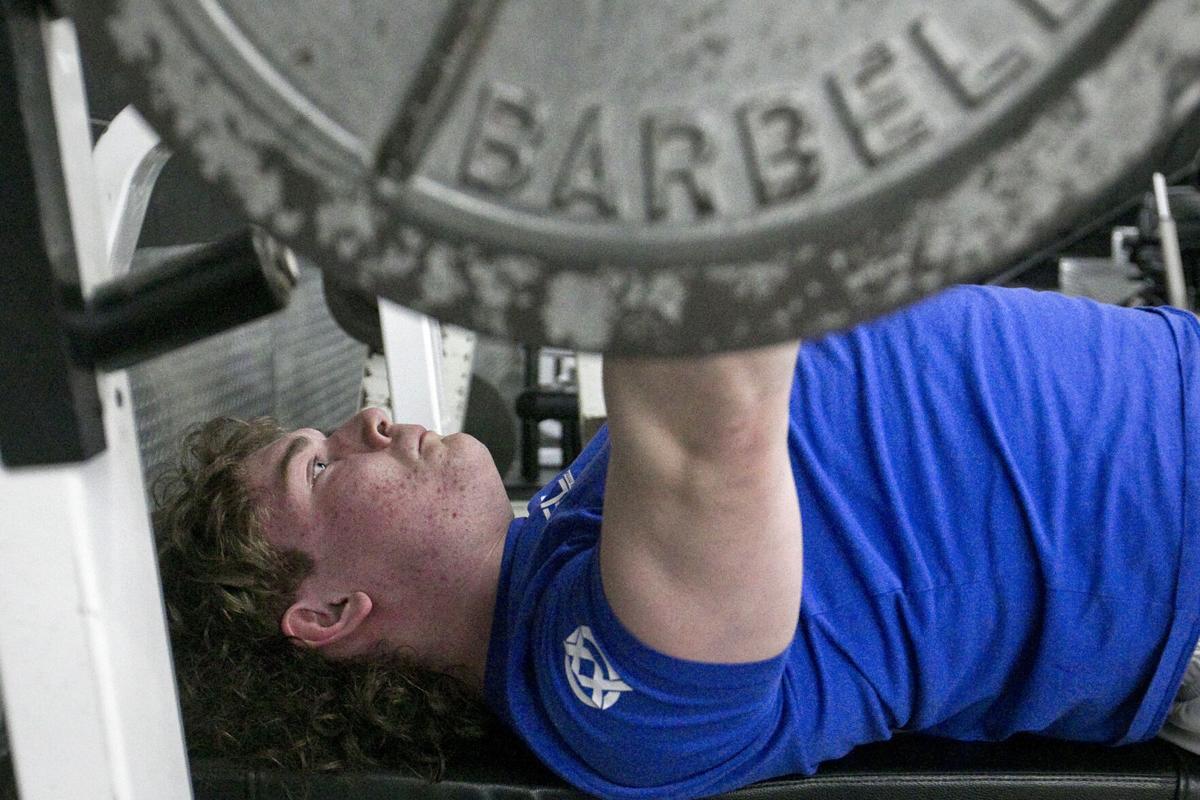 Aidan Gollan, 18, works on his bench press at The Gym Traverse City. 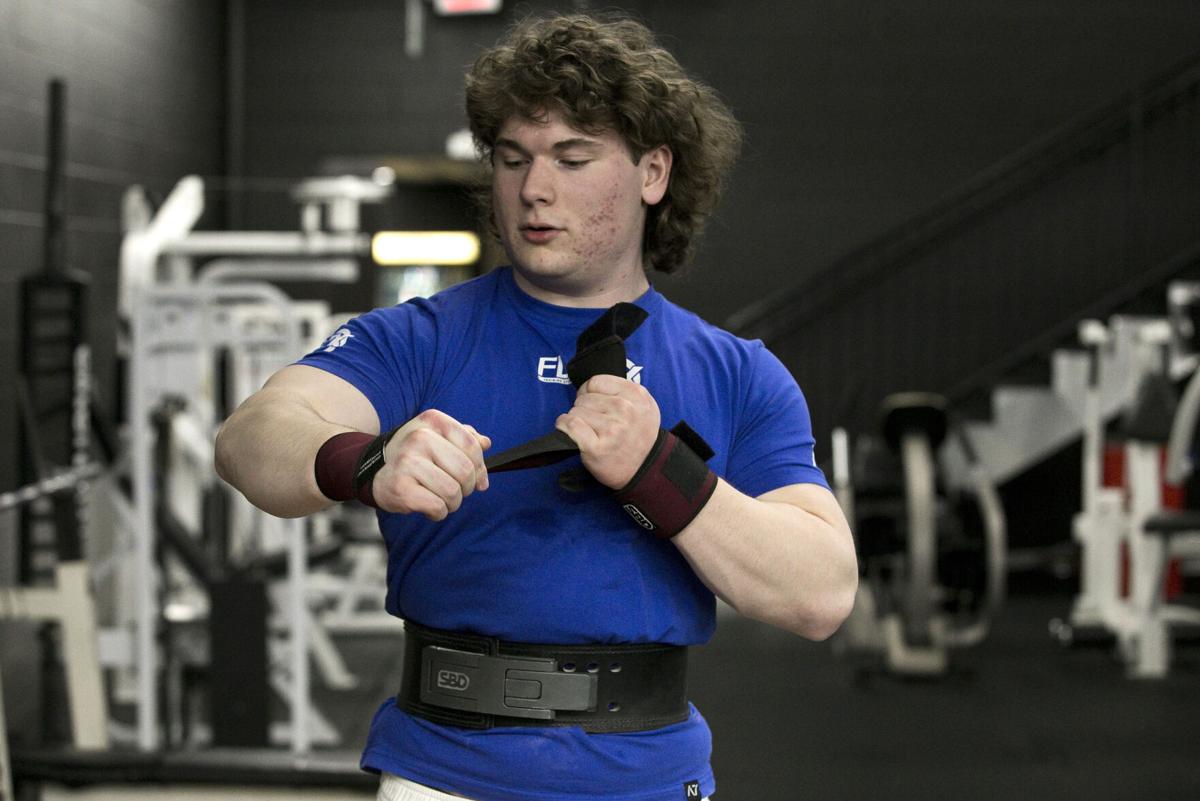 Gollan adjusts his wrist straps in between bench press sets while working out. 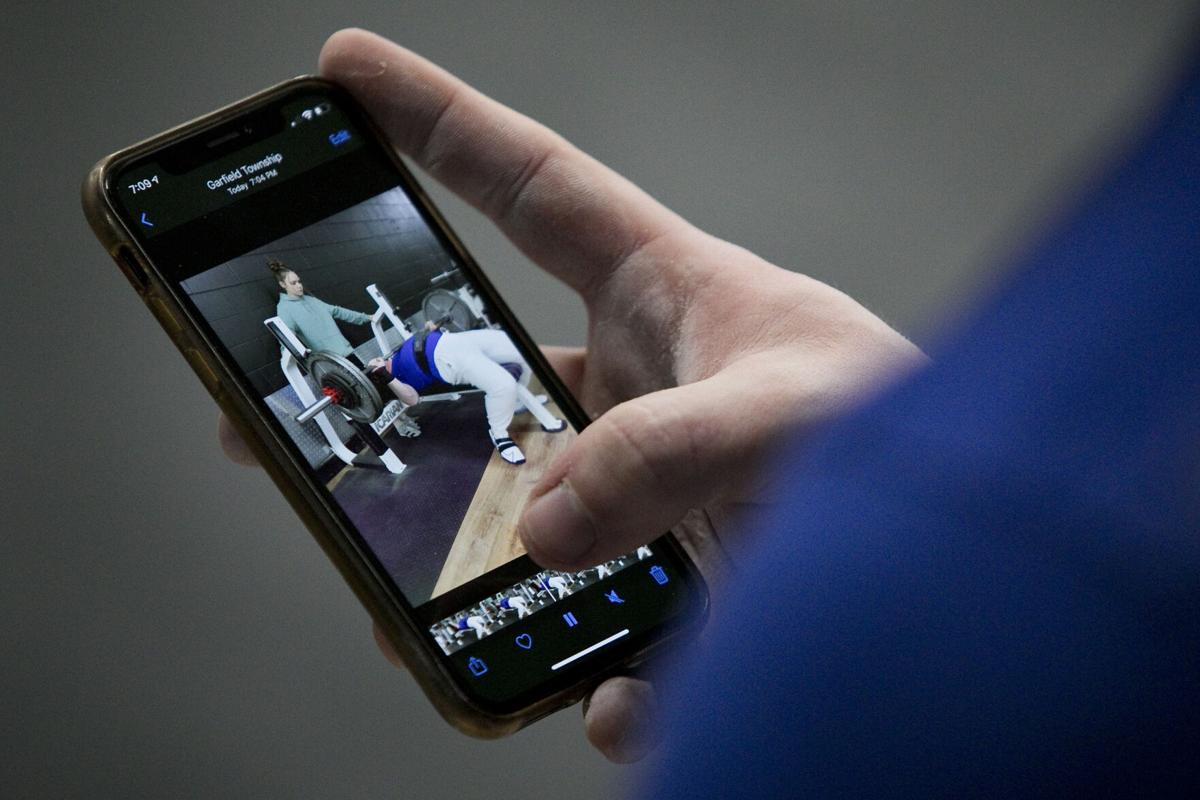 Aidan Gollan, 18, watches a video of his most recent set to check his form. 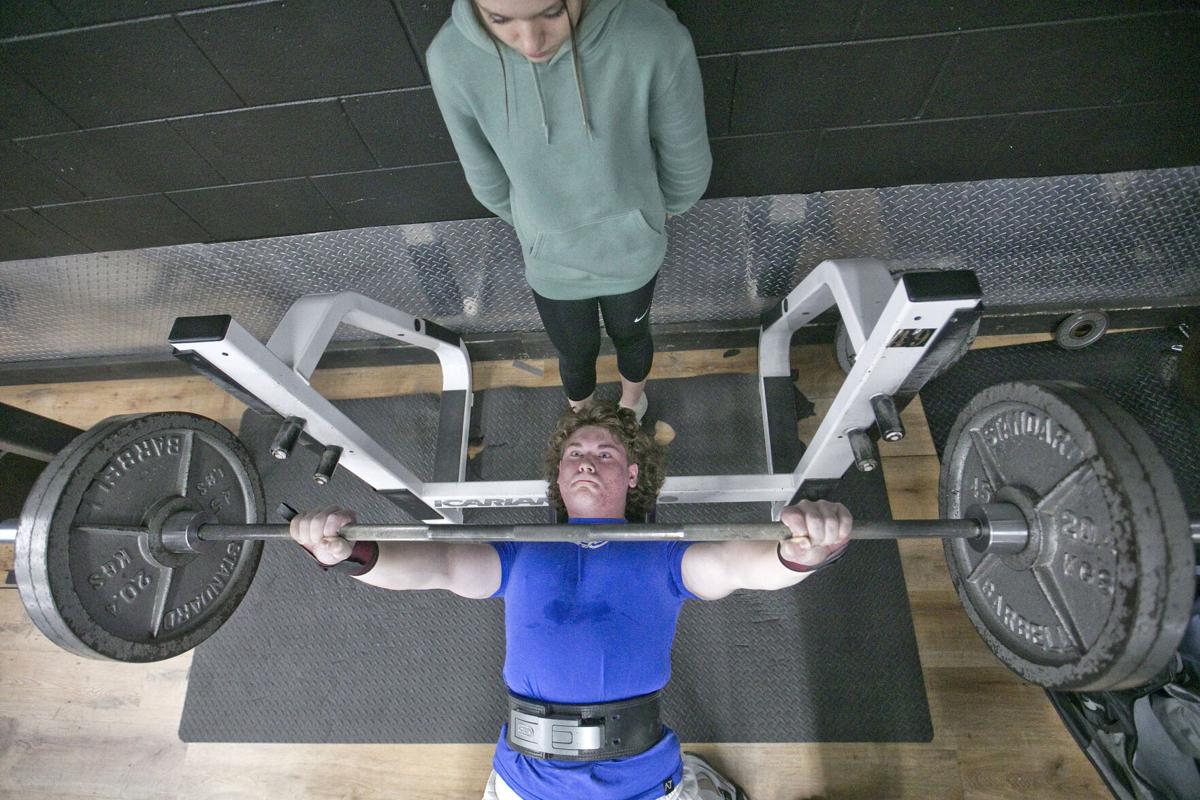 Aidan Gollan, 18, works out at The Gym Traverse City.

Aidan Gollan, 18, works on his bench press while Stephanie Schichtel, 17, spots him at The Gym Traverse City.

Aidan Gollan, 18, works on his bench press at The Gym Traverse City.

Gollan adjusts his wrist straps in between bench press sets while working out.

Aidan Gollan, 18, watches a video of his most recent set to check his form.

Aidan Gollan, 18, works out at The Gym Traverse City.

Aidan Gollan, 18, works on his bench press while Stephanie Schichtel, 17, spots him at The Gym Traverse City.

TRAVERSE CITY — Aidan Gollan’s coach had some news for him. But he wasn’t sure he should tell the then-17-year-old in the middle of the USA Powerlifting Nationals.

Gollan, now 18 years old and a senior at Traverse City Central High School, was in the middle of his squat set at the USAPL’s High School and Teen National Championships in Colorado in May.

“I shouldn’t tell you this,” Gollan’s coach, Christian “Big Body” Ferratti told him.

So instead of telling Gollan, Ferratti took Gollan’s phone, opened the Notes app, typed in what he wanted to say and told Gollan not to look at it until after his final lift.

Gollan listened, put that out of his mind and went through with the rest of the competition, finishing with his third deadlift of 485 pounds.

“The third one was a really, really tough lift,” Gollan said. “When I got it, I was so excited because I hadn’t missed a single lift that competition. That’s a really big achievement.”

Hitting every lift is known as “going nine for nine” — successfully completing all three bench presses, all three squats and all three deadlifts.

Ferratti walked up to Gollan after the final lift and told him to go open the Notes app.

“He wrote, ‘It’s really tough to go nine for nine,’” said Gollan, who finished ninth in his age group and weight class at nationals. “That was an amazing experience.”

Gollan’s journey into the world of powerlifting didn’t begin that long ago.

The former football and hockey player had been working with TC Central strength and conditioning coach Doug Gle when he found powerlifting videos on YouTube. Just days before registration was set to close, Gollan signed up to compete in the Due North Feats of Strength in Traverse City in September 2020.

Gollan went on to place first at the event — his first competitive effort — winning the 16-and-under division and lifting a total of 1,025.1 pounds between the squat, bench press and deadlift.

He then placed first in the same age group at the Michigan State Championships in December of last year. When he moved up to the 17-an-under age group, Gollan took ninth and 18th in the MR-T2 and MR-V divisions, respectively, at nationals. He also nabbed first and third in the same two divisions at the RC Classic in Big Rapids in September.

Gollan’s father, Jason, said his son has accomplished a lot in a short amount of time.

“He has a bunch of hardware. That’s for sure,” Jason said. “He has grabbed this and taken it to a level that’s really inspiring. And he’s done it all on his own, which is what you want for your kids — to find their thing, what they’re good at.”

On Nov. 6, Gollan took home three first-place finishes in the MR-T2 division at the Michigan State Championships and finished 10th in the MR-O division, all in the 17-and-under age group. He broke his own record for the bench press, which he set last year, lifting 364 pounds — 11 more than his 2020 effort. Gollan also set personal records in the squat at 474 pounds and 570 pounds in the deadlift, although that was not in competition.

Gollan was eyeing the state deadlift record at the Nov. 6 meet. He needed to pull 567 to set a new mark, but his coach put Gollan’s top end at 545 pounds.

“If you go 22 pounds over what your coach tells you and you miss it, it’s like why is he coaching you?” Gollan said.

Again, Gollan listened to his coach and managed to lift 550 in competition. But he was still curious to see if the record was within his reach.

He walked into the warmup room and put 570 pounds in front of him.

“I hit it,” he said. “I could’ve gotten the state record. I’m a little bit disappointed I didn’t go for it, but it is what it is.”

Since the state meet, Gollan said he’s stepped back and reexamined his priorities.

“It isn’t just about state records,” he said. “That doesn’t mean much in the grand picture. I want to be the best national-level powerlifter I can be.”

Gollan said not letting the short-term excitement of hitting a big number in training take away from the success you could have on meet day is important. His focus remains on nationals in March, where he would like to make it onto the podium. That would take at least a fifth-place finish.

“I still have a long way to go,” Gollan said. “Podium at nationals would be a good start, but there’s definitely a lot of work I have left to do.”

Fortunately, Gollan has many people who believe in him. He had the opportunity to meet the University of Michigan powerlifting team at a recent event and is looking forward to meeting many of the powerlifters he interacts with online who also train with Ferratti.

“I love how great the powerlifting community is,” he said. “Everyone is supporting everyone just for showing up.”

Gollan could find himself attending Michigan or Northeastern University. His mother, Linda, said college will be great for him.

“I’m really grateful for Aidan,” Linda said. “He is a different kid because of this. Having that focus and self-discipline makes our job as parents much easier. This is not just ‘I’m going to behave until the game’ and then not focus. This is every day.”

Powerlifting has not only changed Gollan and become part of his life, but it has given him direction and a way to measure his growth.

“You know how strong you are right at that time by how much you can lift,” he said. “You can look at the top athletes in the world and know they’re only a certain percentage better than you.”

One day, Gollan hopes to be in the top percent and the one others look up to.

ONEKAMA — Chloe Wisniski gets to save a lot of vehicle miles next year.

MANCELONA — The Mancelona Ironmen are doing what they can with what they have.