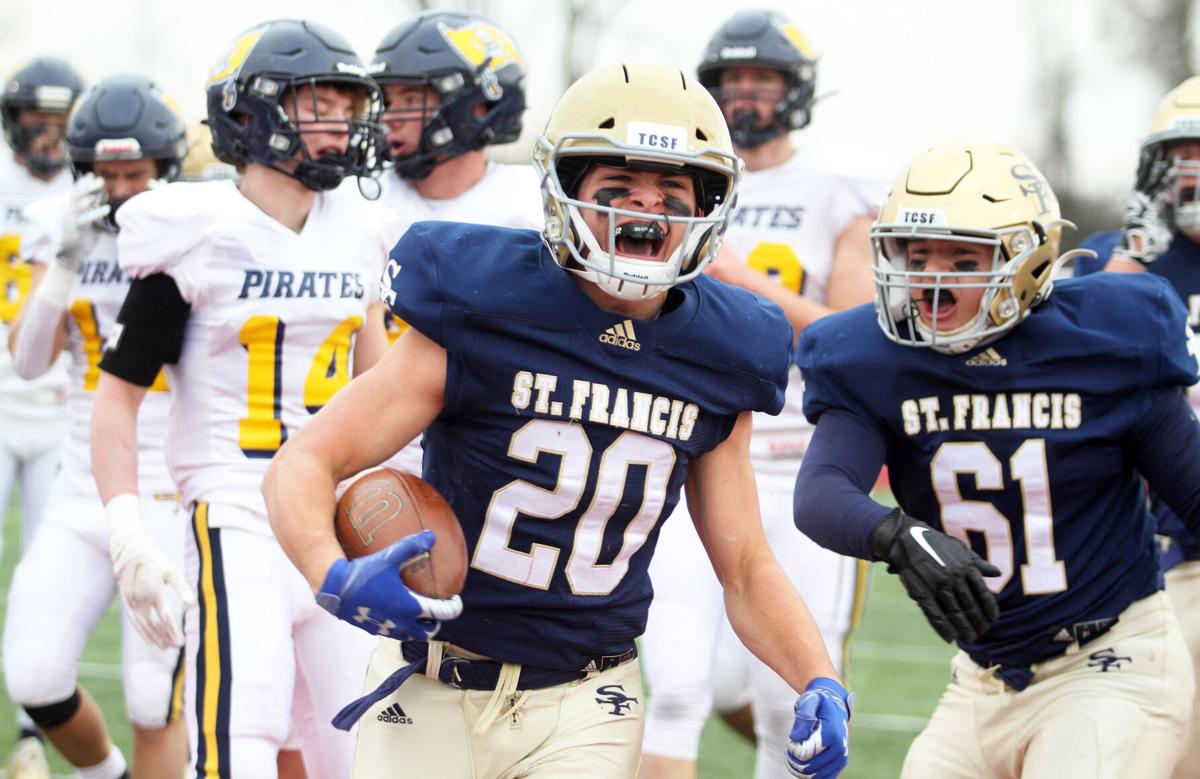 TC St. Francis running back Gabe Olivier (20) screams after scoring a touchdown Saturday in the Division 7 semifinal against Pewamo-Westphalia in Cedar Springs. 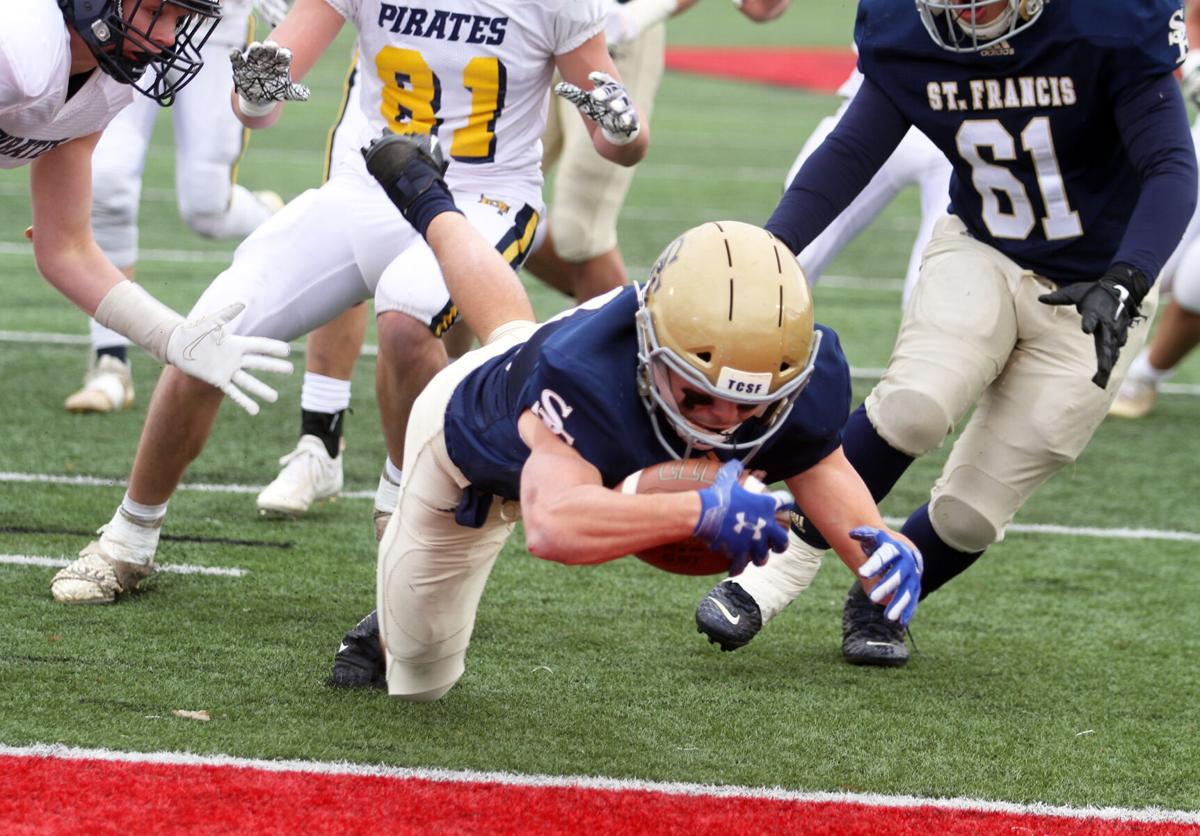 TC St. Francis running back Gabe Olivier (20) dives into the end zone for a touchdown Saturday in the Division 7 semifinal against Pewamo-Westphalia in Cedar Springs.

TC St. Francis running back Gabe Olivier (20) screams after scoring a touchdown Saturday in the Division 7 semifinal against Pewamo-Westphalia in Cedar Springs.

TC St. Francis running back Gabe Olivier (20) dives into the end zone for a touchdown Saturday in the Division 7 semifinal against Pewamo-Westphalia in Cedar Springs.

Conner Russell made sure the third one didn’t.

Russell made a great interception with 53 seconds remaining to allow No. 2-ranked Pewamo-Westphalia to hold on for a 28-21 Division 7 state semifinal win Saturday over the No. 1 Gladiators at Red Hawk Stadium in Cedar Springs. When Russell managed to drag a foot inbounds, it essentially sealed the Pirates win.

“Before I was just a little nervous,” Russell said. “I was still confident in our reads. We were just going through everything that we’ve been practicing through the week. And then I saw the ball in the air and I knew it was mine. I just went and made the play.”

Russell’s red-zone pick ended up as Pewamo’s third defensive stop inside the 20 as St. Francis’ offense was dangerous all afternoon, but couldn’t get over the hump against an aggressive Pirates defensive siege.

Westphalia (13-0) moves on to play Lawton (13-0) in next Saturday’s state championship game at Ford Field in Detroit. Lawton beat Jackson Lumen Christi 21-20 in the other D-7 semifinal.

The Gladiators (12-1) trailed by two touchdowns with just over two minutes remaining, forcing a Pewamo punt that went out of bounds after only 15 yards and set up TCSF at its own 49. St. Francis completed two passes to Wyatt Nausadis and another to John Hagelstein to quickly move down the field, and Nausadis hauled in a 24-yard touchdown pass to the sticks from Charlie Peterson with 1:01 remaining.

Nausadis recovered an onside kick as only one second came off the clock.

“We executed that onside kick perfectly,” St. Francis head coach Josh Sellers said. “It went just 10 yards. I mean, 30 feet and that’s it. So proud of our guys and how they fought to the end.”

TCSF was whistled for kicking the ball into the ground on its first onside attempt, a 5-yard penalty instituted in 2018 by the National Federation of State High School Associations (NFHS).

“We got that onside kick, and I was like, ‘Whoa, holy cow, we have a chance to this game again,’” Nausadis said. “And then, just unfortunately, we had a broken play.”

Russell intercepted a pass intended for Josh Groves on the next play to seal the game, as St. Francis didn’t have enough time outs left to prevent P-W from running out the clock.

“Coaches said all week they were going to make plays,” Russell said of St. Francis. “We just had to stay confident ourselves and just keep on going throughout the game.”

Groves came up with one of St. Francis’ two interceptions (the other came from Gabe Olivier) as the two traditionally running teams combined for five picks.

“We leaned on our defense all year it was kind of a struggle offensively today,” Miller said. “They’re very good, obviously. Very good up front and they were doing some things that were giving us trouble, so our defense we lean on them and they came through today.”

St. Francis came away from red zone trips on three of its first four possessions with only one score — an Olivier 12-yard TD run with 3:02 left in the first quarter for a 7-0 lead after Brice Kempf’s extra point. Troy Wertman countered with touchdown runs of 1 and 2 yards for a 14-7 halftime advantage.

“You’re never happy when they’re in the red zone so often,” Miller said. “But we’ve just done a great job or bend but don’t break.”

The Gladiators tied the game back up at 14-14 on an eight-play drive highlighted by a 28-yard completion from Peterson to Nausadis and capped by an 8-yard Garrett Hathaway touchdown run.

Wertman’s third rushing TD of the day — this one from 7 yards out — put Pewamo up 20-14 after a failed snap on the extra point. The Pirate defense came up with a three-and-out and Peterson boomed a 56-yard punt inside the 10 that Connor Bengel picked up on the roll and ended up returning 95 yards for a touchdown. Wertman completed a conversion pass to Brody Miles for a 28-14 lead.

Pewamo starting quarterback Cam Cook returned from a Week Six knee injury and threw for 95 yards and ran for another 66. Wertman added another 57 rush yards as the TCSF defense held the Pirates under 4 yards a carry. Fullback Brock Thelen returned from a broken leg sustained in Week Seven to play limited snaps.

Olivier ran for 83 yards and a TD, while Hathaway added 54 yards and Nausadis 49 as the Gladiators outgained Pewamo 385-247.

Nausadis hauled in six reception for 115 yards, while Drew Hardy caught three passes for 49, Hagelstein grabbed two for 24 and Groves had two catches for 11 yards. Jacob Grozenski, Olivier and Groves led the Glads in tackles with nine each, and Hathaway made seven stops. Hagelstein had a third-down sack that stopped Pewamo’s first drive of the game.

Peterson ends the season with a St. Francis single-season record of 1,876 passing yards and 22 TDs to only six interceptions.