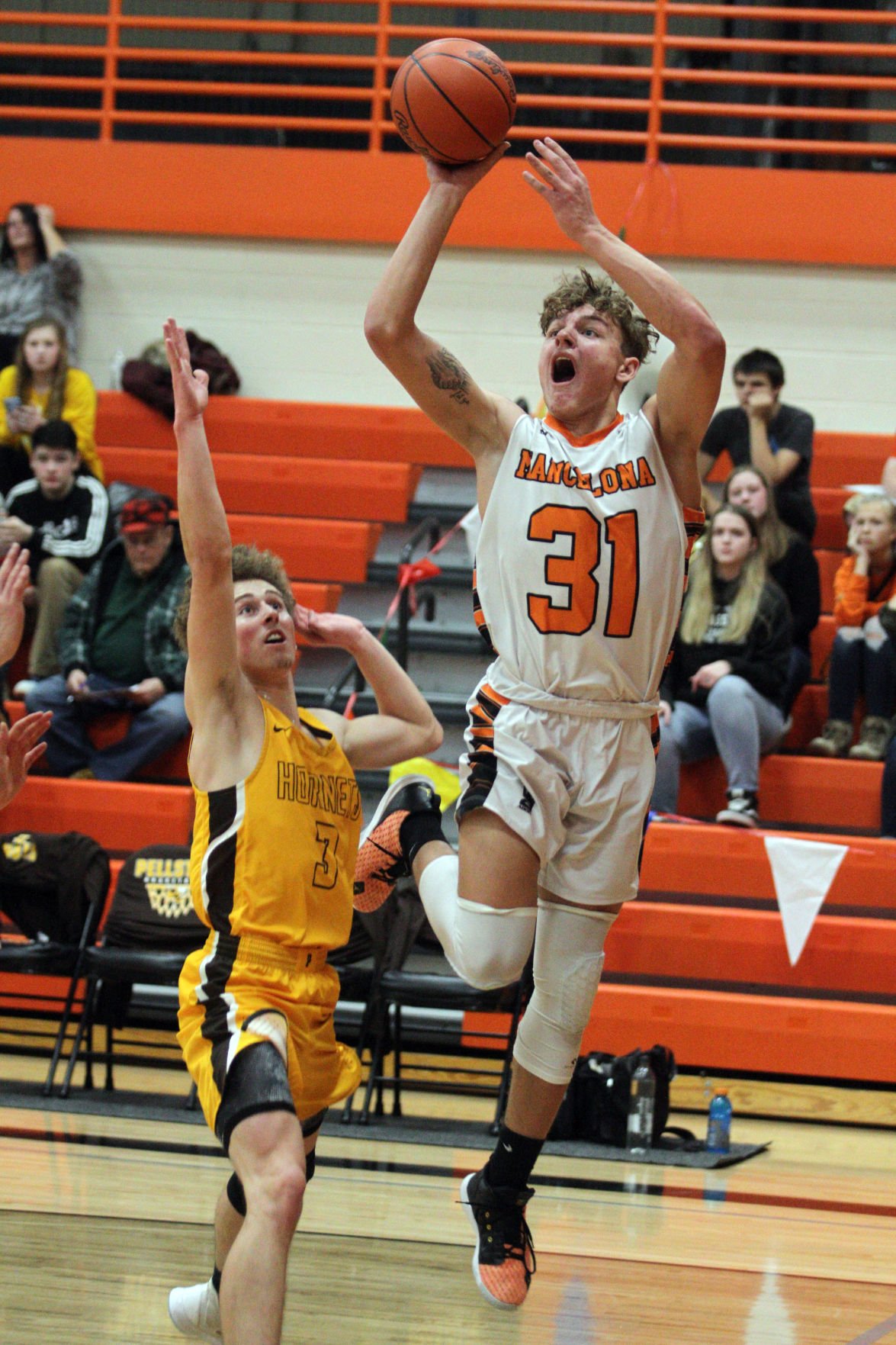 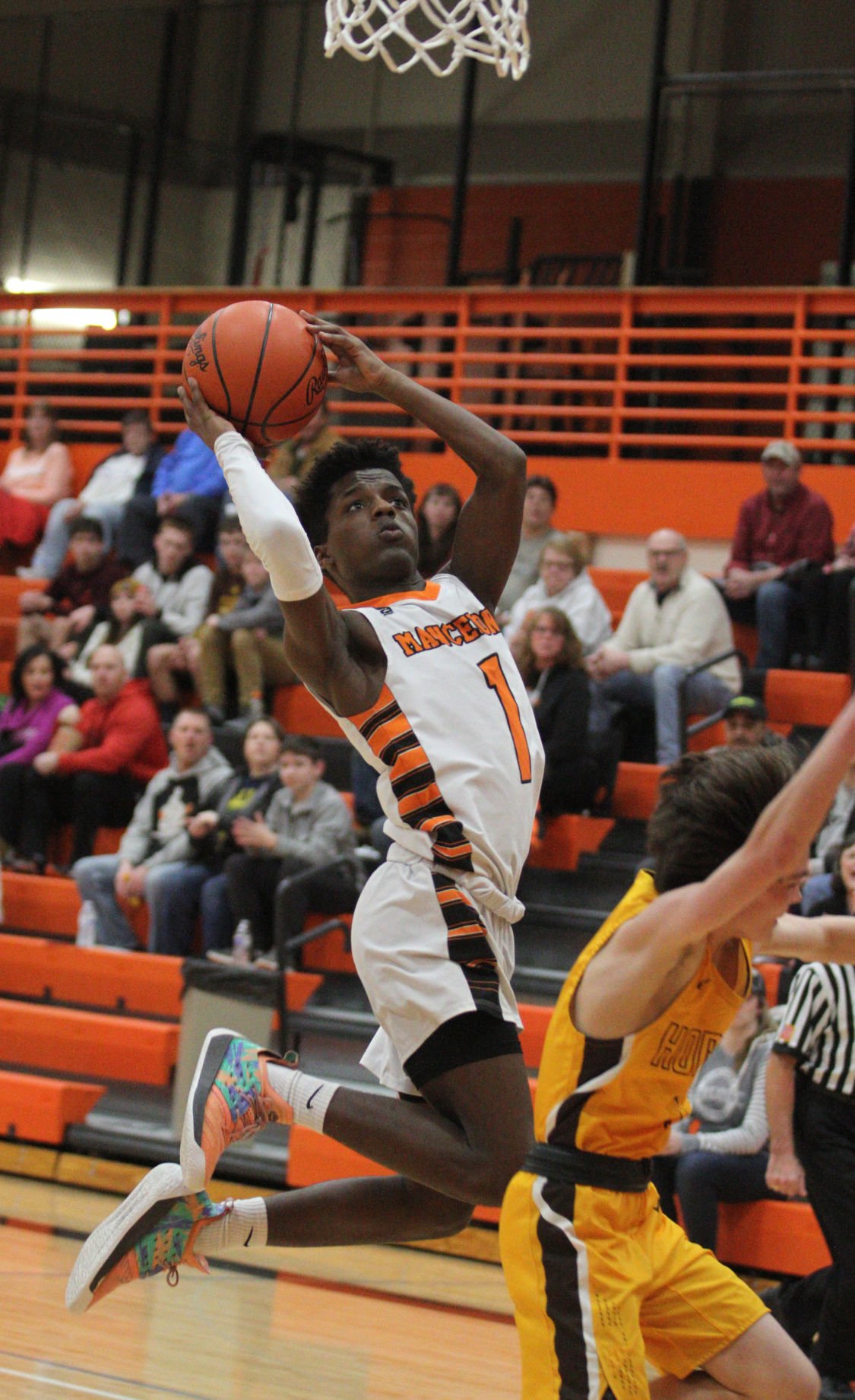 Mancelona guard Adam Ackler (1) goes up for a bucket Tuesday against Pellston. 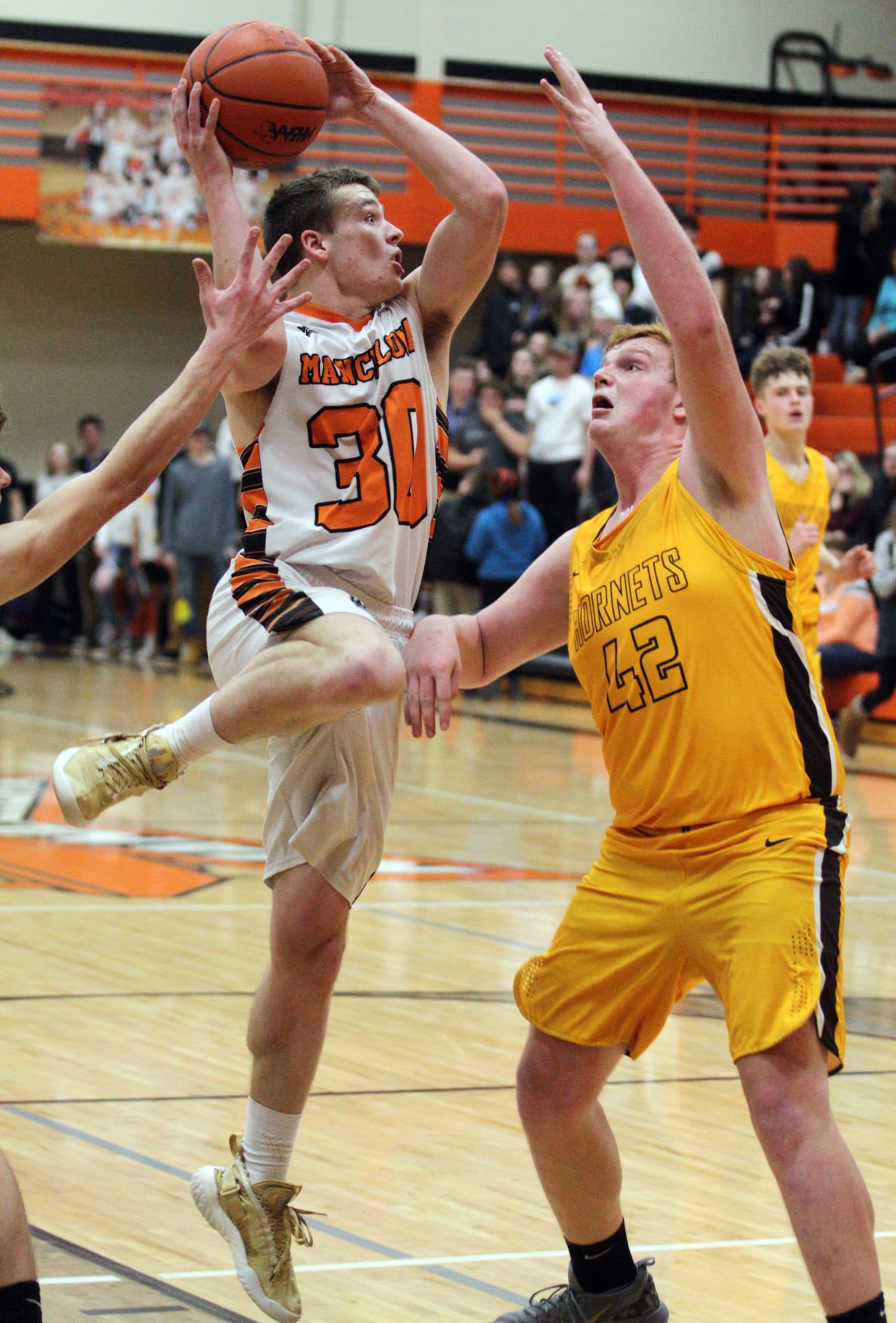 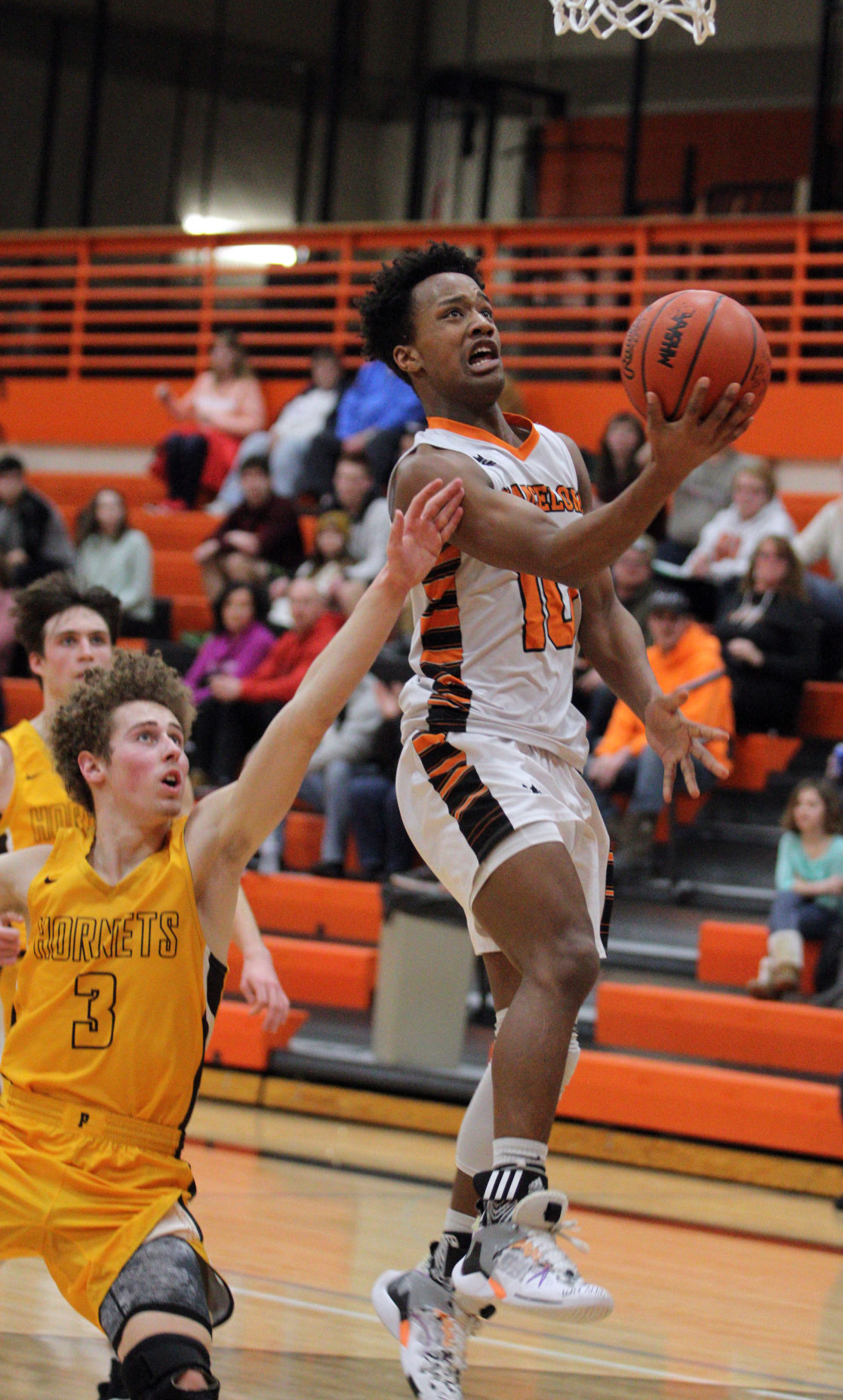 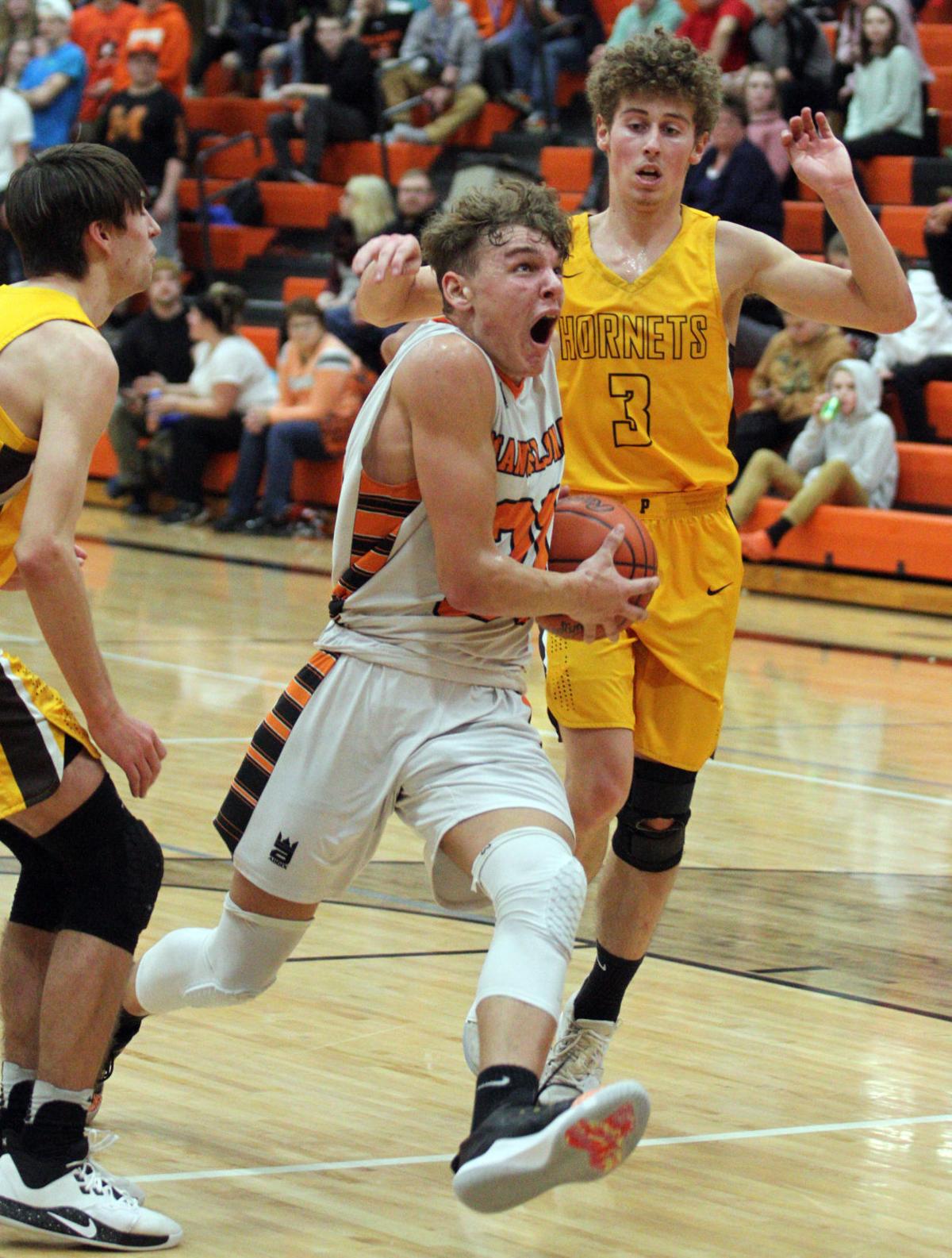 Mancelona guard Adam Ackler (1) goes up for a bucket Tuesday against Pellston.

Ironmen star Jayden Alfred swatted several Hornet shots to lead a comeback that came up short after Pellston jumped out to a lead as big as 23 points. The Hornets held on for a 72-60 win Tuesday to take sole possession of first in the SVC and hold the league’s only undefeated record.

“We came out a little slow, came out kind of nervous, I think because we knew they’re good,” Alfred said. “We upped the intensity the second half, realized that we can stick with them and we tried to come back. If we come out in the first half like we did the second half, I think it’s a lot closer game, a lot different game.”

Pellston led 43-22 with 1:33 remaining before halftime and 63-40 just before the third quarter ended. A Justin Ackler baseline 3-pointer pulled the Ironmen within 67-57 with 2:51 remaining, and Mancelona seemed to have renewed life. Alfred’s layup 13 ticks later cut the deficit to single digits for the first time since the final minute of the first quarter.

Pellston’s student section started an “overrated” chant when Alfred had the ball in the late third quarter, even after Alfred rejected a pair of Cassidy shots, including pinning one to the backboard.

“I tried to keep my hand in his face, but he just makes them,” Alfred said. “He’s good off the dribble and can finish around the rim.”

Cassidy is averaging 33.8 points a game this season, and scored 45 of Pellston’s 65 in a win over Johannesburg-Lewiston Jan. 7. He’s put up 88 points in his last two games.

None of Mancelona’s main guards — Alfred, Adam Ackler, Justin Ackler and Oumar Sy — are seniors. The team’s seniors reside in the frontcourt with Johnathan Ancel, Tommy Palmer and Tuku Naniseni.

“We got exposed a little bit tonight,” Mancelona head coach Brian Sheridan said. “I think we did a poor job of communicating and they got some really easy baskets. And that kind of just shows our youth and inexperience, but that’s stuff that we can fix in practice.

“I think we can fix some things. Our young guards, they’re going to continue to improve throughout the season, so that’s exciting.”

Last season, the Ironmen lost to Pellston at home and beat the Hornets in Pellston.

Mancelona has to wait until Feb. 19 to get another shot at swatting the Hornets, with seven other Ski Valley games in between.

“We’ve got to just plow through the rest of the (league) games,” Alfred said. “I think that’s the toughest team we’ll play, and I think we can get them at their place when we’re playing again.”

Palmer scored 10, Ancel nine and Adam Ackler six for Mancelona, which hosts Onaway on Thursday. Palmer was whistled for a hard foul on Cassidy in the waning seconds as Cassidy came up with a steal and appeared headed for the game’s only dunk with 2.9 ticks left.

“Everybody knows (Blake is) going to get his points,” Pellston head coach Larry Cassidy said. “But tonight, Colin Robbins stepped up with 18 and Joey Rizzardi had nine. We need those other role guys to do their jobs. They don’t have to score 25, and certainly Blake has the team on his back right now, but he’s got great helpers along the way. We get a win on the road in the Ski Valley and you chalk it up and get on the bus and head north and hope the roads are good.”