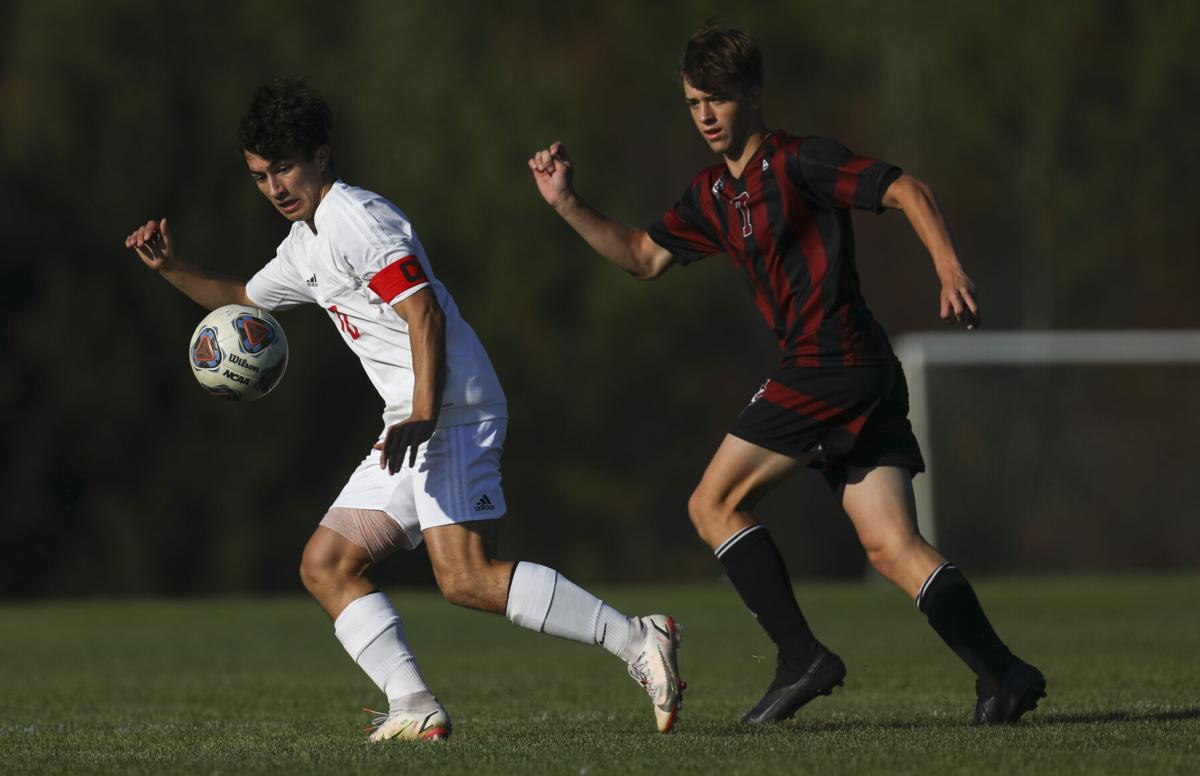 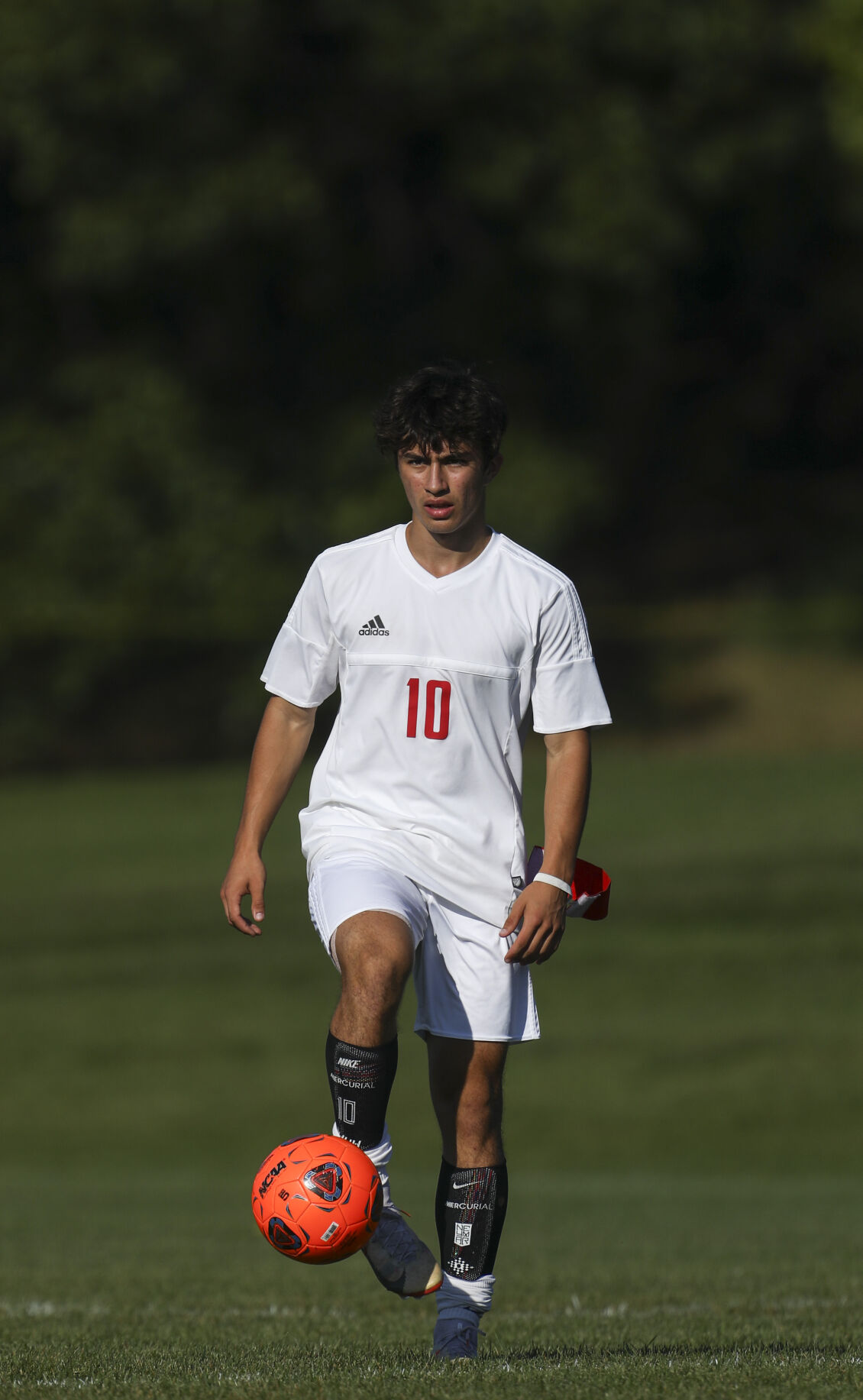 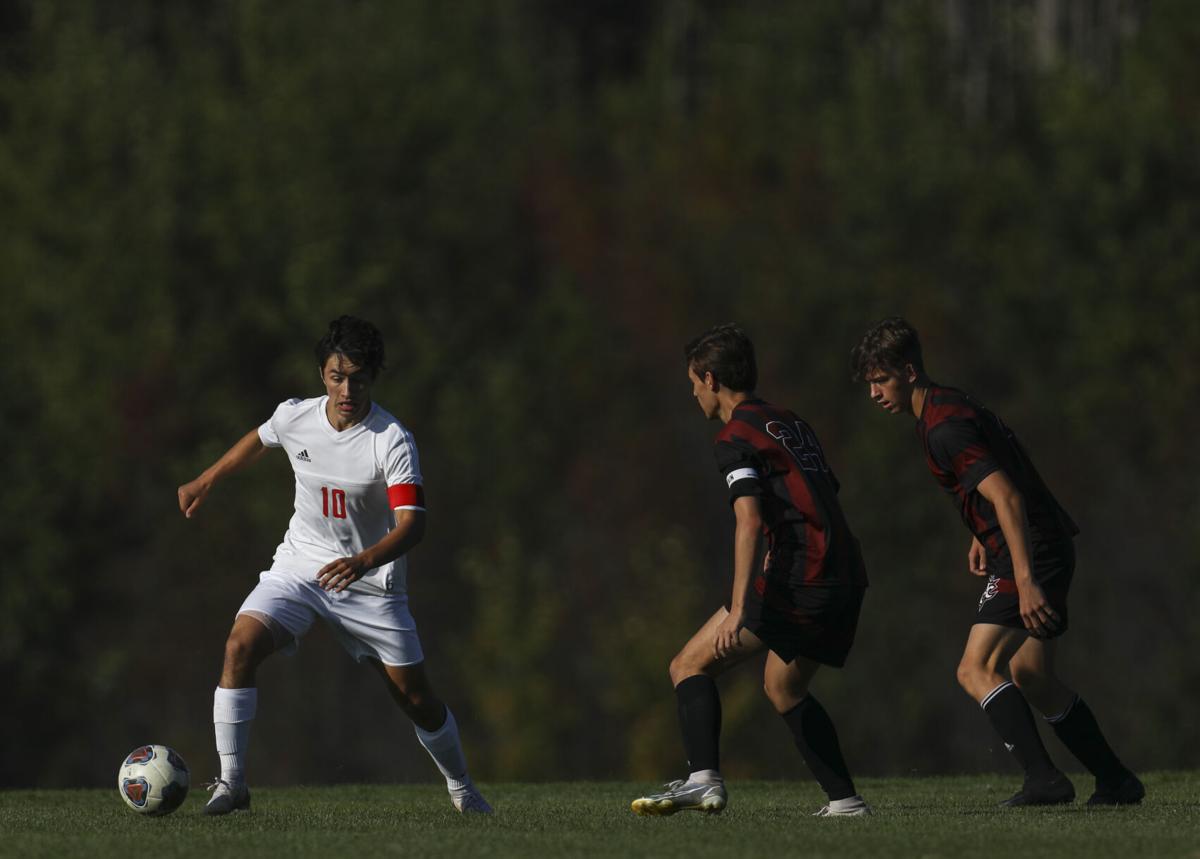 Benzie Central’s Kevin Hubbell plays in a game against Traverse City Christian at the Keystone Soccer Complex in Traverse City on Friday, Oct. 1. 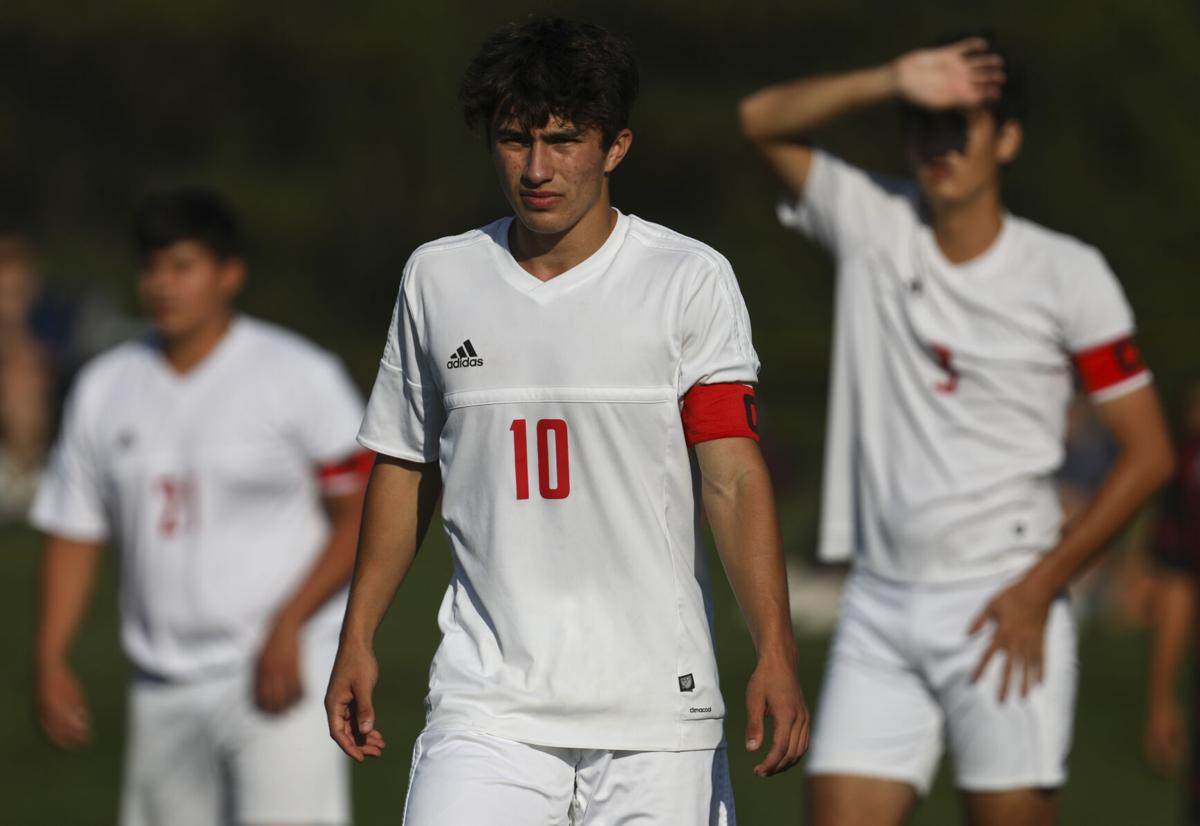 Benzie Central’s Kevin Hubbell plays in a game against Traverse City Christian at the Keystone Soccer Complex in Traverse City on Friday, Oct. 1.

Eleven are needed to field a full team. The Huskies were eight short for the 2021 season.

Kevin Hubbell, the team’s star forward, couldn’t help but be disheartened that he might not be able to play the sport he loves in his final year of high school — not unless he could find more of his peers to join the squad.

“I knew that I needed to reach out and bring some guys in,” he said. “I had to take that leadership role and step in and do what was necessary to get them on the field so we could have enough players to play our first game.”

Even with just the trio of players, Benzie Central head coach Chris Batchelder kept the meeting going. He wanted to know the goals those three had in their hearts and minds. Both team goals and individual goals.

Hubbell was straightforward with what he wanted to accomplish. For the team, a district championship. For himself, at least one individual state record.

The 17-year-old phenom is widely considered to be one of the best players in the area and across Michigan. The prospect of etching his name in the Michigan High School Athletic Association record books wasn’t much of a stretch.

Hubbell fell just shy of the record for most consecutive hat tricks, scoring three goals in a game, with eight. The state record is nine.

So he set his sights on another — most goals in a single game.

He eyed that record since that Aug. 9 meeting. Before every game, Hubbell turned to his coach just as he was about to take the pitch and said, “I’m breaking that record today.”

The record didn’t fall in the first game or the second or the third. Not until the 11th match of the season did the opportunity to make history arise.

Hubbell found the back of the net eight times in the first 10 minutes of the Huskies’ Sept. 29 game against Kingsley.

Breaking the 10-goal state record, set by Cheboygan’s Karl Trost in 2003, was within his grasp.

Three goals later, it was firmly in his hand. Five goals after that, Hubbell eclipsed the 14-goal national record — a mark Dale Self of Sumter, South Carolina, set 41 years ago.

“It was something that I never thought I would see,” Batchelder said. “What you put into this game is what you get out of it. To see someone who’s worked so hard his entire life blow it up like that was just breathtaking.”

Others didn’t see it the same way.

Soon after news broke of Hubbell’s double record-setting performance, social media and the comments sections on news websites were flooded with criticism of the 16 goals and the Huskies’ 17-0 win against a struggling Kingsley team.

“We are in a society where negative speaks before positive,” Batchelder said. “I knew everyone wouldn’t agree when he broke the record. I knew there’d be some people upset with it.”

Batchelder said the criticism is fine — as long as it’s directed at him and not Hubbell. But plenty fired at the 17-year-old.

“I want this to stop, and I want to get back to appreciating soccer,” Batchelder said. “All that noise is just noise.”

The backlash and repercussions likely will continue.

Kingsley Area Schools Superintendent Keith Smith said discussing how the district will respond is premature, but the matter is set to go before the Kingsley Board of Education on Monday.

“We feel that there needs to be some type of response on behalf of our boys, there are just varying degrees of opinion on what the most appropriate way to do that is,” Smith said.

Athletic directors and administrators called Smith the day following the game to give their support and express how “unbelievable” it was that Hubbell scoring 16 goals was allowed to happen. Smith said he wouldn’t have had a problem with the record performance if the game was competitive; but unfortunately for the Stags, they haven’t stayed close in any games this season.

Heading into Saturday, Kingsley had yet to win a game. The Stags’ 0-14 record included 11 shutouts and 11 mercies, which ends the game before regulation when a team is losing by eight or more goals after at least one half of play. Benzie previously mercied Kingsley 9-1 on Sept. 13.

“If high school sports degenerates into ‘Let’s try to hang the most points we can’ and taking advantage of people when they’re down, we’re really missing the mark and need to reevaluate why we’re doing this,” Smith said.

Kingsley head coach Tim VanWingerden said the season was tough before it even started. Much like Benzie, VanWingerden wasn’t sure he’d have enough players to field a team. He didn’t have a player like Hubbell and was working with mostly freshmen and others playing varsity for the first time. Injuries, eligibility issues and problems on the field only magnified those challenges.

“For me and for the players,” he said. “To go after a personal record like that at the cost of another team’s dignity was a little uncalled for. Soccer is not the right place for that. Soccer is a gentleman’s sport.”

VanWingerden had a long talk with his players the next day at practice. He reassured them that they have nothing to be embarrassed about, and he told them how proud he was of them for not calling it quits when it would have been easy to just hang it up.

“They’re tired. They’ve gotten the crap kicked out of them,” he said. “These kids keep showing up every day and working every day — even with people laughing in their faces. They’ve earned the right to represent their school with pride, regardless of how good they are.”

VanWingerden put some of the blame on his shoulders, suggesting that he should have forfeited the game before it got completely out of hand.

“I should have tried to protect my players’ dignity more than I did,” he said. “I could see how frustrated and demoralized they already were, and I didn’t do a thing to stop it.”

Coaches outside of Kingsley have noticed the Stags’ valiant effort, too.

John Vermilya, head soccer coach at Buckley High School, trudged through a winless season — 0-18 — in his first year leading the Bears. Half of those losses were mercies, and most were mercies by halftime.

But now they’ve built a program that made a run to the state semifinals in 2017 and just won the program’s first Northwest Conference title since 1999.

Yet he knows just how VanWingerden and his players feel.

“Can you imagine getting shellacked every game and still coming back for more? That’s heroic,” Vermilya said.

Vermilya said he never would have put up 17 goals on a team facing as much adversity as Kingsley. What happened in that game, Vermilya said it was poor leadership.

“Beating on the weak doesn’t make you strong — it makes you a bully,” he said. “Everything about coaching is teaching these guys to be better men.”

Many, including Vermilya, said Batchelder should have taken Hubbell out of the game well before he broke the record and allowed his other players to get time on the field. The only problem is Batchelder didn’t have many subs he could put in to take Hubbell’s spot. He only had one player on the bench that day.

Batchelder took Hubbell out of the game three times, allowing him to play 29 of the 40 minutes in the first and only half.

“I’m happy to see programs like Leland and Buckley that’ve got so many players. I love that because I want to see soccer grow here,” Batchelder said. “We don’t have that luxury at the moment. My goal is to build that uprising.”

Despite the disapproval Batchelder and Hubbell received, they’ve gotten plenty of congratulations as well — including from the man whose record Hubbell broke.

Trost received backlash when he broke the record, but he admitted it wasn’t anything like what Hubbell is experiencing. Trost’s achievement — which came in a 20-0 game against East Jordan — was before the advent of social media, so all he saw was a comment here and there on online news coverage.

“It’s all garbage. People just love to talk,” he said. “People get on their computers or their phones and just go wild. It’s really sad. I hate it for this kid. I really do. I wish it wasn’t like this.”

“It’s a shame, the BS he’s putting up with over something that his hard work has earned him,” Trost Sr. said. “This kid had an excellent night. That goal was one of his dreams. Good for that kid.”

Trost Sr.’s grandson — who is also Trost’s 13-year-old nephew — plays in the Petoskey Youth Soccer Association. Trost Sr. said his grandson now has a higher bar to reach if he wants that record.

Hubbell can’t wait for the day someone scores 17.

“That’s going to be pretty incredible,” he said. “I just hope it doesn’t happen too soon.”

GET AROUND PODCAST EPISODE 192 TEASER

Hey, it might just be October, but that never means it’s too early to start talking about Ha…