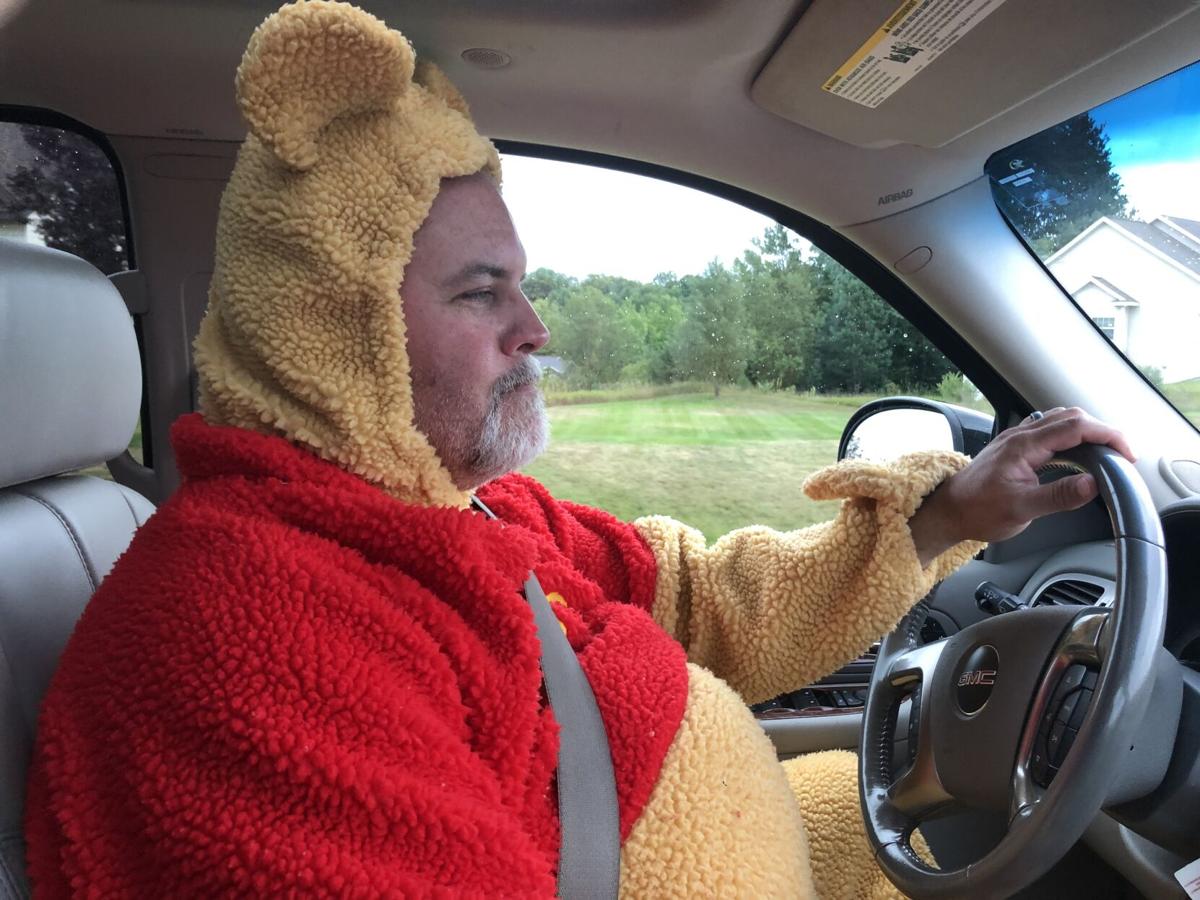 Rich Rountree drives in the Winnie the Pooh costume that’s become the yearly punishment for placing last in the TCC Fantasy League. 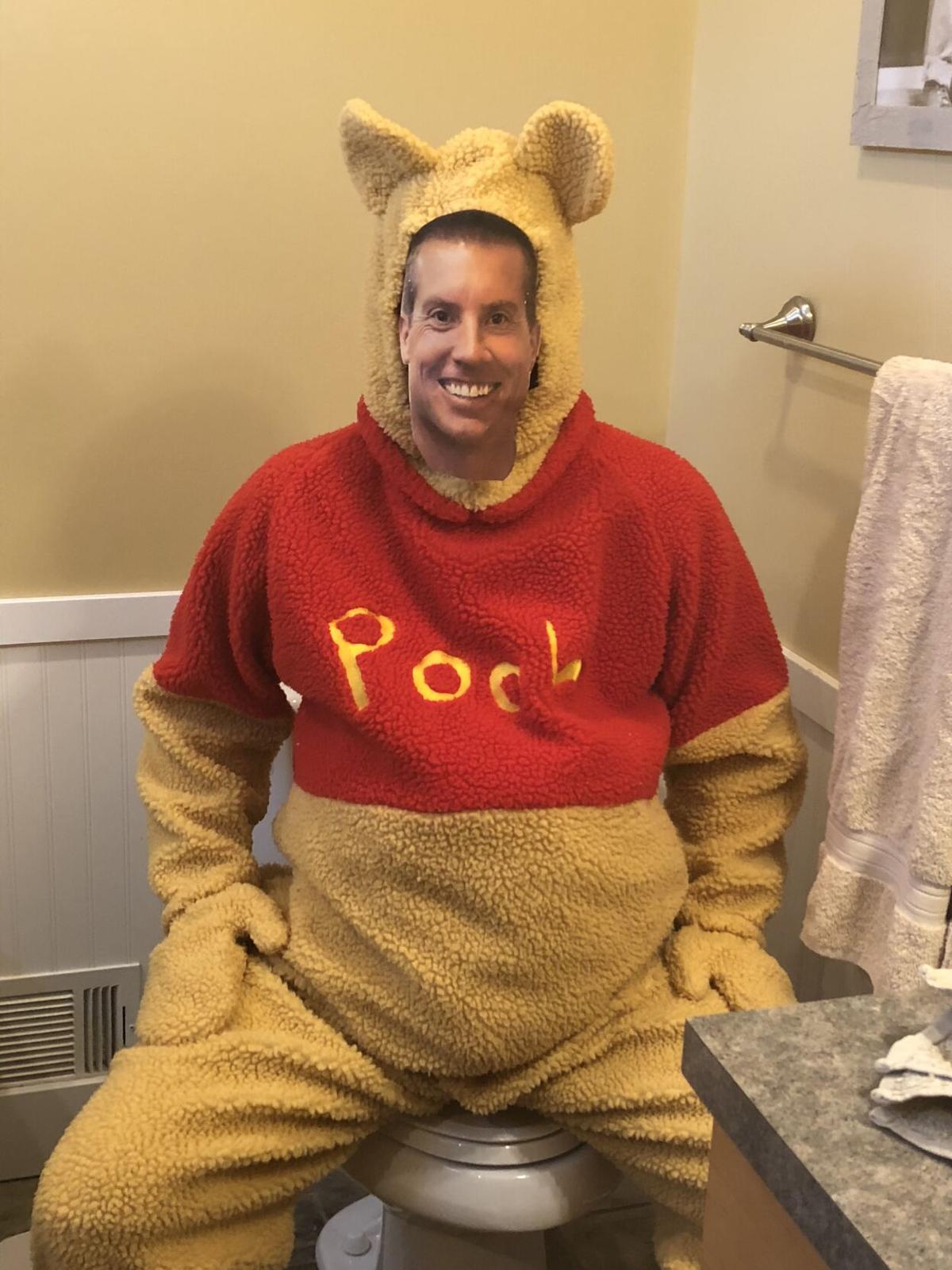 Andy Melius poses for a photo in Mike Gle's home on draft day, wearing the Winnie the Pooh costume and a printout of Todd Tester's face. 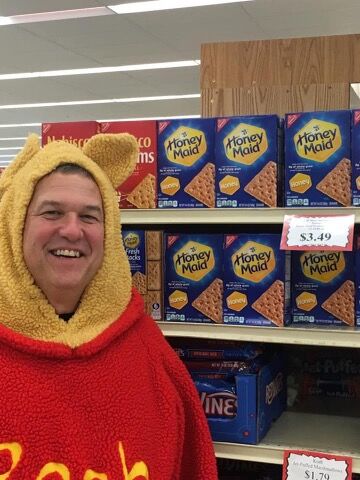 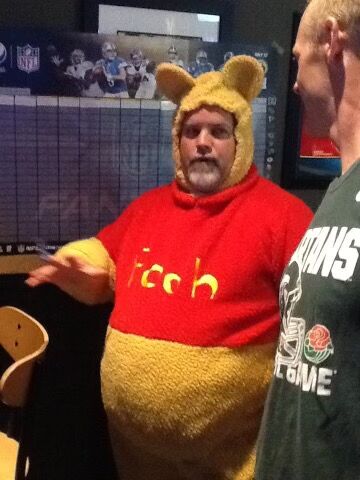 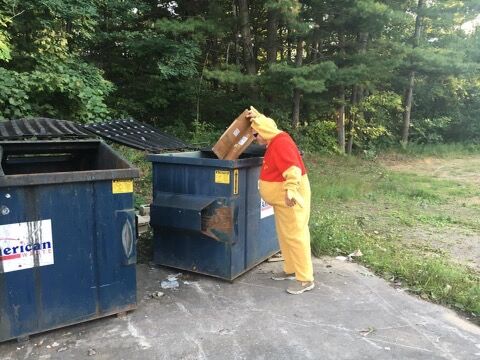 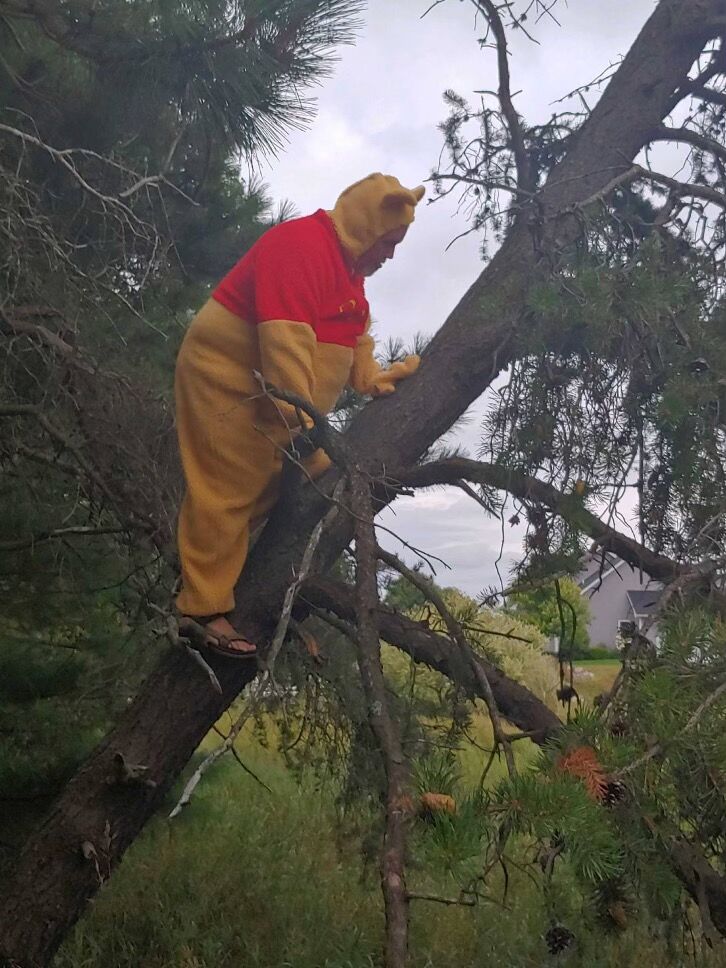 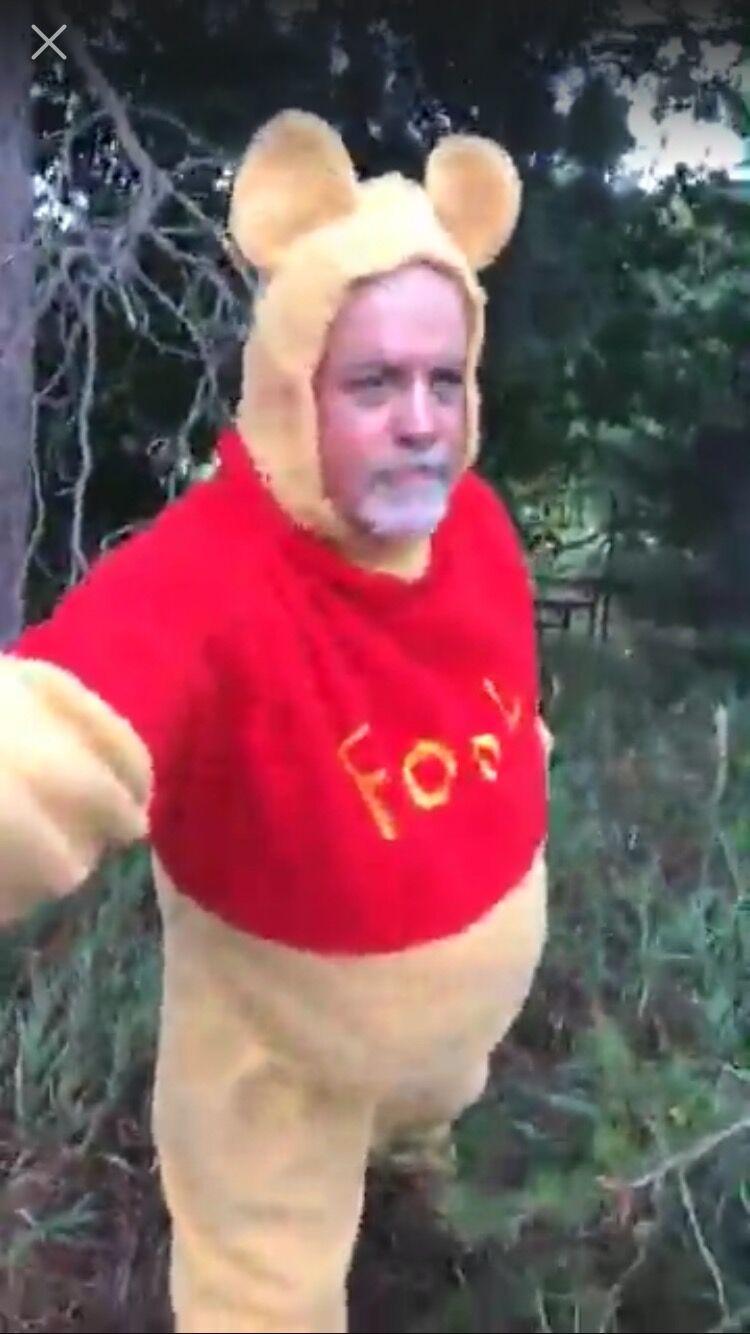 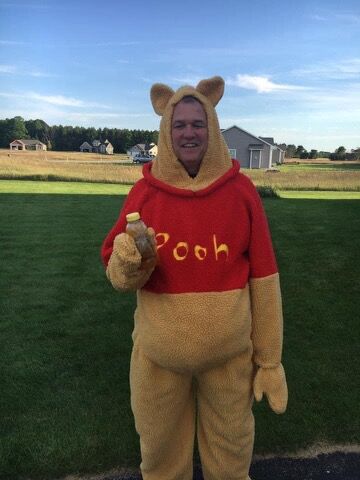 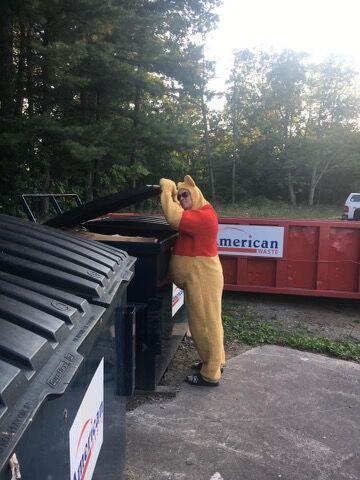 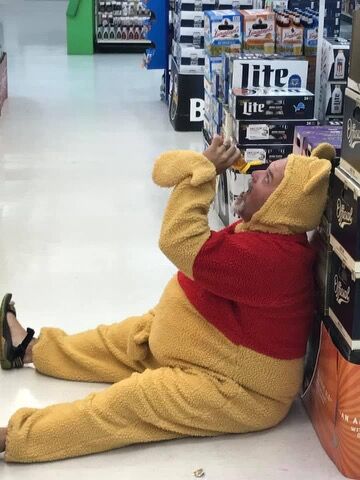 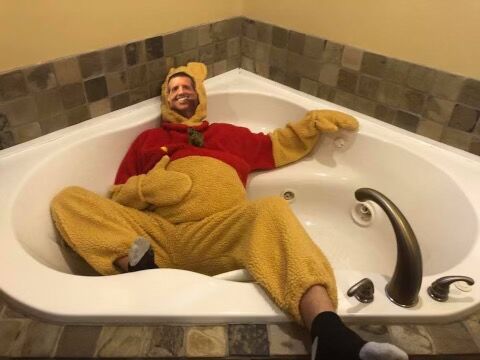 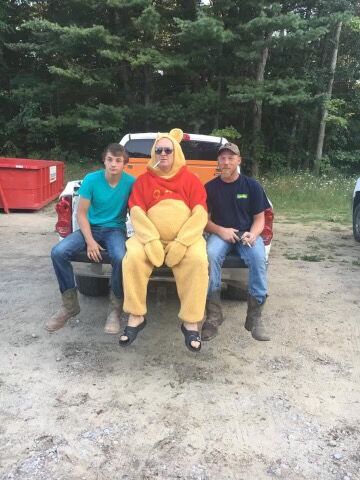 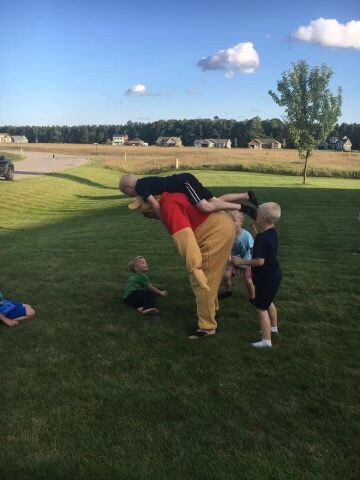 Rich Rountree drives in the Winnie the Pooh costume that’s become the yearly punishment for placing last in the TCC Fantasy League.

Andy Melius poses for a photo in Mike Gle's home on draft day, wearing the Winnie the Pooh costume and a printout of Todd Tester's face.

Next August, he’d be wearing a Winnie the Pooh costume, paraded around Traverse City and the victim of various social media posts.

That’s the stakes in the TCC Fantasy League.

Teams aim to avoid last place more than they reach for the money the top spot brings.

After all, the punishment for finishing last in the 12-team fantasy football league consisting mainly of Traverse City Central High School coaches and teachers involves wearing a Pooh costume and doing whatever leaguemates come up with for a day at the following season’s draft.

Odette suffered through a season with injuries to stars such as George Kittle, Kenny Golladay and Drew Brees, fighting for the basement. He sat in last place going into the last week of the regular season.

“I was getting mentally prepared to be the Pooh bear,” Odette said. “You have to sit there for nine months until it happens. And everybody reminds you every day. If you act like it bothers you, it’s going to be a long nine months.”

Then his team won the final week of the regular season, and Kelly Clark’s lost, putting them in a tie. Odette won the tiebreaker on most points scored throughout the season. Clark, the former head football coach at TC Central, now has to don the Pooh for the third time in nine years, tying Rich Rountree for the most times finishing last in that span.

This might be the point of the story where you’re saying, “Wait, grown men are dressing up as Winnie the Pooh?”

Well, yeah. But not necessarily voluntarily.

Sure, they enter the league voluntarily, but everyone has visions of grandeur until that big injury hits or your top running back holds out.

The costume resides safely in a tote in Rountree’s basement the rest of the year.

Each August, it makes its dreaded appearance. Well, dreaded for one guy.

The rest delight in it. They get to suggest things the Pooh has to do.

Every year, the loser must make an appearance at Oleson’s on 3 Mile Road and ask an employee which aisle has all the honey and buy a few honey-related items.

Then it’s off to Peegeo’s for pizza and posing for photos with interested onlookers.

“It got a lot of attention from people inside the restaurant,” Rountree said. “But going to Oleson’s is pretty fun.”

The chores Pooh must perform vary from year to year. Rountree once climbed a tree in Mike Gle’s back yard. They made Clark look through a dumpster behind Peegeo’s.

One time Pooh walked up to the McDonald Park pickleball court, sat down and watched a game in silence.

The children of Doug Gle and Mike Gle tackling Pooh at the draft. Jumping on a trampoline. Rountree once was photographed drinking raw honey out of a bottle in an Oleson’s aisle.

Interestingly, the costume has fit everyone thus far.

“It does get really, really hot,” Rountree said. “Really fast.”

Except for Todd Tester. He finished last inn 2017 and then quit the league, choosing to not don the costume.

When Tester dropped out of the league, his replacement — Andy Melius — wore the costume at the draft at Mike Gle’s house, but didn’t get paraded around town. He did wear a cardboard cutout of Tester’s face, however.

“The worst would be Tester,” Rountree said. “He just left the league without having to wear it. Most of the guys are pretty good sports about it. If you’re going to do it, you might as well have fun with it.”

Rountree, a second-grade teacher at Kingsley Elementary and a long-term substitute teacher for Doug Gle at one point, bought the costume 19 years ago for $60 to pair up with his daughter’s Piglet costume for Halloween. Many years later, he’d occasionally wear it at TC Central football games around Halloween when his kids were in the band.

One time, a fan in the stands yelled, “Hey, did you lose a fantasy football league?”

An idea was born.

The tradition started in 2012, although the league predates that by quite a bit. The TV show The League served as a bit of an inspiration. Dan McGee won the league that season, while Rountree had to wear his own costume after finishing in the basement.

“As good as it feels to win money,” Mike Gle said, “not winning Pooh feels just as good.”

The league pays out for the top two regular-season records and top four playoff finishers, but the best payout is participating in good old tomfoolery by giving the Pooh victim the business.

Mike Gle is the commissioner, taking over for Clint Kerr and Tim Homa before him.

“It’s fun when you think about it,” Mike Gle said. “You’re choosing to be part of something where winning is not as important as not losing.”

Rountree ended up wearing his own costume the first two years, including the league’s only year doing its draft at Buffalo Wild Wings while having someone dressed as Pooh. Rountree had to put everyone else’s stickers of drafted players’ names on a board at the BWW draft as part of the last-place punishment.

“That was a huge disadvantage because you’re doing that instead of focusing on your draft,” McGee said.

Now they draft at the commish’s house each year — after the Pooh gets his due, of course.

Doug Gle started putting the Pooh parade on Facebook Live starting in 2018. TC Central wrestling coach Don Funk suggested in a comment during the first Facebook Live stream of the Pooh’s happenings that Rountree do burpees, so he did. Right in an Oleson’s aisle.

Rountree became the first to wear the costume three times by finishing last in 2018, with Clark taking that honor each of the last two seasons. Other league members that haven’t either won or taken last are Ben Berger, Dan McGee, Carl Scholten and Eric Schugars.

It bears mention that Rountree’s team name is PoohsYourDaddy.

“I’ve been fortunate to stay out of the Pooh suit,” said Schugars, who runs the Hittin Paydirt team. “I’ve been the old Denver Broncos of the league; I get to the finals and lose.”

Doug Gle and Scholten face off in this year’s championship game. Scholten barely made the playoffs in the sixth spot, then made a run to the title contest.

Schugars initially thought the football coaches would unfortunately have more time to devote to the league this year, after it appeared high school football would be another casualty of the coronavirus pandemic.

“That was kind of the running joke,” Schugars said. “If we can’t have high school football, we’ll spend too much time on fantasy football.”

The Packers mask might want to make a comeback, because Clark finished at the bottom each of the last two years.

“Everyone’s main goal is ‘I don’t wanna wear the Pooh suit,’” Mike Gle said. “It’s fun at the end of the (regular season) to watch the guys that are struggling.”

TRAVERSE CITY — The adjectives for sports in 2020 mirror those often applied to the year as a whole.

TRAVERSE CITY — Christian Boivin had a couple good sounding boards once he received the Division 1 offer he’d been waiting for.