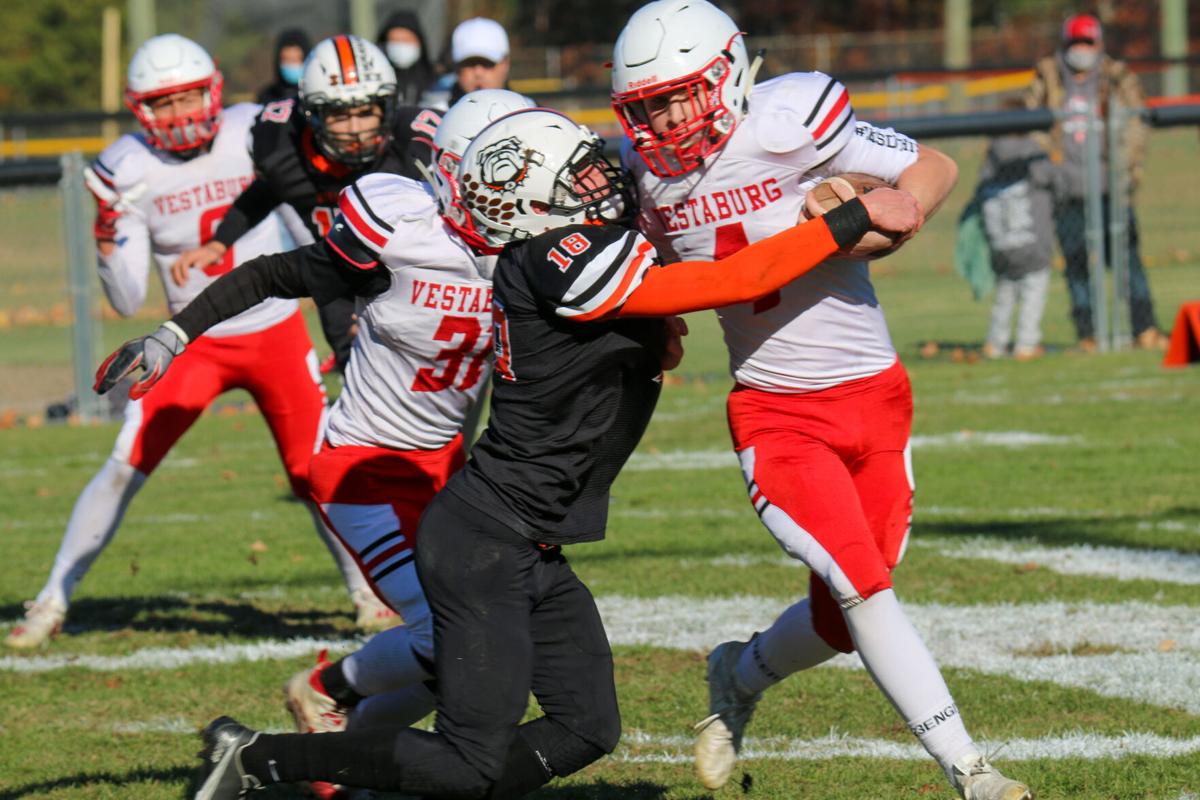 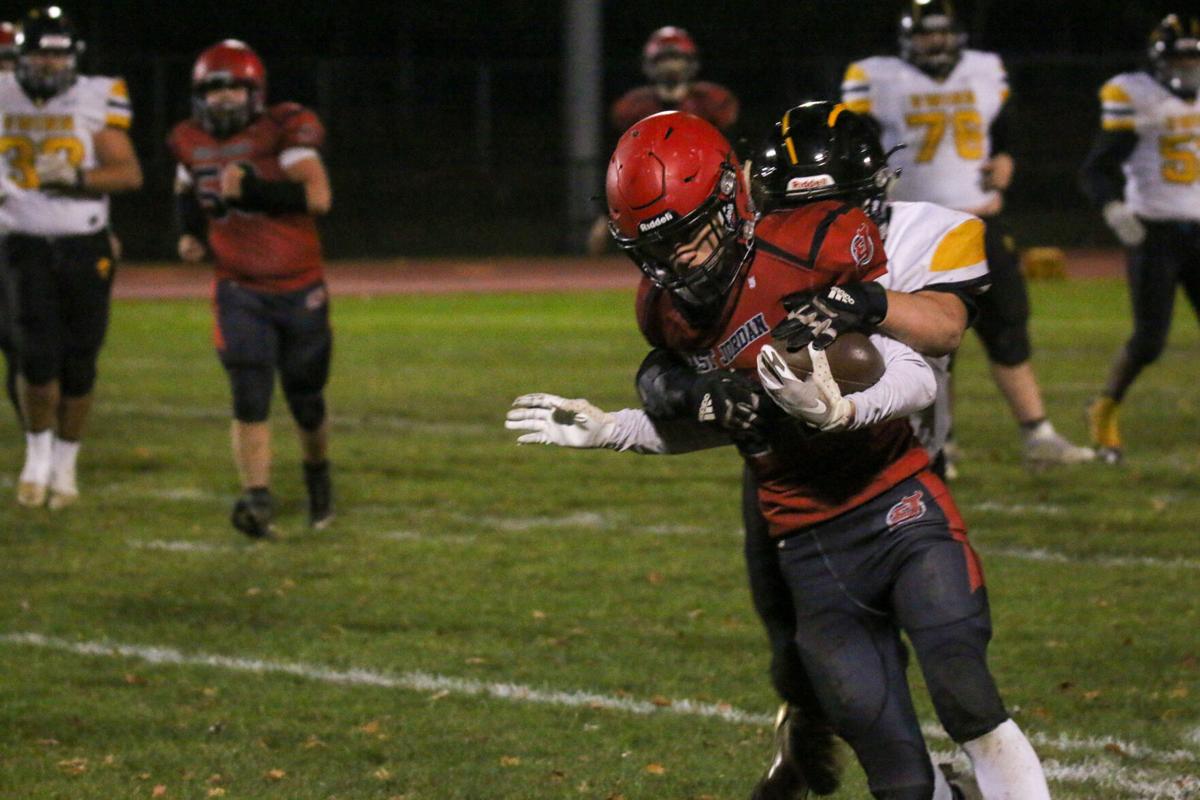 TRAVERSE CITY — Football could join every other Michigan High School Athletic Association team sport in allowing every squad to participate in the postseason if a proposal currently in the early stages passes muster later this school year.

The MHSAA is currently in the midst of taking surveys from athletic directors and other school administrators about the topic at its seven yearly update meetings, which included one Monday in Gaylord.

The proposal faces a good number of hurdles to clear before it could be implemented, possibly as far as two years away, even if it passes this academic year.

Traverse City West football coach Greg Vaughan, a member of the Michigan High School Football Coaches Association’s board of directors, said he thinks the change will be passed, citing how many coaches and schools changed their minds on the topic when all teams made the playoffs last year because of a shortened regular season during the COVID-19 pandemic.

“If you asked me 10 years ago, I was absolutely a believer in how the playoffs worked,” Vaughan said. “But seeing last year and how it worked ... everyone kind of saw it last year and that’s a soft sell.”

Vaughan said the old “six-and-in” playoff system, used from 1999 until 2019, “created a monster” of teams chasing six victories to clinch a postseason berth.

This year’s new format, complete with a new points formula that rewards strength of schedule, was supposed to help with scheduling and allow teams who play stronger schedules to have an edge. It scrapped the six-win requirement and instead relies upon playoff points to determine which schools get in.

MHSAA Representative Council member Karen Leinaar cited an instance earlier this year where two downstate schools with open dates in the same week still refused to play each other because a loss could hurt their playoff point average.

“School administrators are still trying to manipulate schedules,” Leinaar said, “when strength of schedule was supposed to alleviate that.”

MHSAA spokesman Geoff Kimmerly said the association hasn’t counted the survey results for any of the seven update meetings, six of which have already been held. He said a count won’t be conducted until after the final meeting is held Oct. 22 in Marquette.

Kimmerly said the effort for an “all-in” format has been around for decades, originating mostly on the west side of the state.

“After last year, it really made sense to ask schools now that they’ve had this experience ... which one they prefer,” Kimmerly said.

The plan involves getting rid of the ninth regular-season game in order to expand the playoffs by a week. The current playoff points formula likely would be used to determine seeding, Kimmerly said.

Vaughan also said he’d like to see entire regions seeded from 1-8 instead of each of that region’s two districts seeded 1-4.

Kimmerly said the proposal’s path starts with the MHSAA’s football committee meeting in January. If it moves out of committee, it’d head to the Representative Council meeting in March and possibly see a Rep Council vote in May. If it passed, most schools would already have their 2022-23 schedules in place for a full nine-game slate, so the changes likely wouldn’t go in to effect until the 2023-34 season, Kimmerly said.

In the relationship between high schools and the MHSAA, schools keep regular-season ticket money, while the MHSAA gets most of the postseason income.

The new proposal would mean one less home gate every other year for schools, and one more week of playoff receipts for the MHSAA.

Money is “not the reason we’re talking about it,” Kimmerly said, saying the MHSAA’s finances have stabilized after the group lost much of its income in 2020 when much of the basketball playoffs were canceled by the pandemic and all spring sports likewise called off.

Leinaar, a former athletic director at Bear Lake, Benzie Central and Gaylord, said schools rely less now on gate receipts to pay for programs, with booster clubs taking on more of those financial burdens over the years. She said a typical split — after the home team is reimbursed for costs such a referees, security and custodians — is 10 percent to the visitor, 40 percent to the home team and remainder to the MHSAA for opening-round games. From there on, the visitor receives no portion of the gates and the home team gets much less than 40 percent, with the MHSAA pocketing the rest.

“Part of it, I love,” East Jordan athletic director Phyllis Olszewski said. “I love that everybody gets a second start to the season in the playoffs.”

Olszewski also said playoff points don’t tell the whole story of a season, particularly for smaller schools. A team without a star or two can easily start the season in an 0-2 hole it can’t dig out of in the old six-and-in system and the current points-based formula doesn’t guarantee winning teams make the postseason.

On the other hand, Olszewski said, some teams could be very limited by player injuries and departures for winter sports, making that playoff game an uphill climb for a 1-7 or 0-8 team facing an 8-0 top seed in the opening round. Teams feeling completely outmatched could opt out of the playoffs, Leinaar said.

Last year’s expanded playoffs — the result of COVID-19 reducing the regular season to only six games, and some schools nots even playing that many because of outbreaks of their own or opponents’ — gave some schools such as East Jordan the opportunity to host their first football postseason game. Following a 3-3 season, the Red Devils hosted Upper Peninsula foe Gwinn, with the Modeltowners prevailing in a close 24-20 contest, one of a minority of games that week decided by less than three touchdowns.

Even at 4-2 and with their two losses to teams with a combined 10-1 mark, this year’s Red Devils are presently on the outside looking in for the postseason. With a playoff point average of 18.571, current projections put the last Division 8 qualifier at 19.167.

“I think last year was good the way they did it,” Ream said.

Ream’s Mesick Bulldogs went 4-2 in 2020 and hosted and won a playoff game for the first time in school history. This year, the 4-2 Bulldogs are currently in position to be the last team into the eight-player Division 1 playoff bracket.

“For high school football, there’s a lot of history with the effort and will and follow through on making the playoffs,” Katt said. “I understand the power and aura with it, but on the other hand, there’s a lot of schools that are on the cusp every year.”

“Without having to worry about how many wins you get, you can just let it rip,” Katt said. “There’s a lot of ways you can do this.”

“I think it’d make scheduling easier,” Thorington said. “Not everyone would be chasing those playoff points or wins as much. I’m still trying to decide how I feel about it. It’d be more aligned with the other sports, but you also had a lot of non-competitive games last year.”

With all teams in last season’s playoffs, and the postseason seeded by playoff points, the first round witnessed many 6-0 or 5-1 teams playing 0-6 or 1-5 squads.

Only 67 of 227 first-round 11-player games and three of 31 first-round eight-player games were decided by less than three touchdowns. There were 16 forfeits, almost all because of COVID-19 reasons or low player numbers.

The new plan would include eight-player football, but might not be able to include every team there. Much the same happened last year, when the number of eight-player teams would have necessitated adding two weeks to the postseason, so a handful of schools with the lowest playoff point averages didn’t get in, but were allowed to play one more regular-season game against another team left out if they so chose.

“We’ve been able to experience both now, and we’ll have some good data,” Leinaar said. “If some good came out of COVID, this might be one of them.”