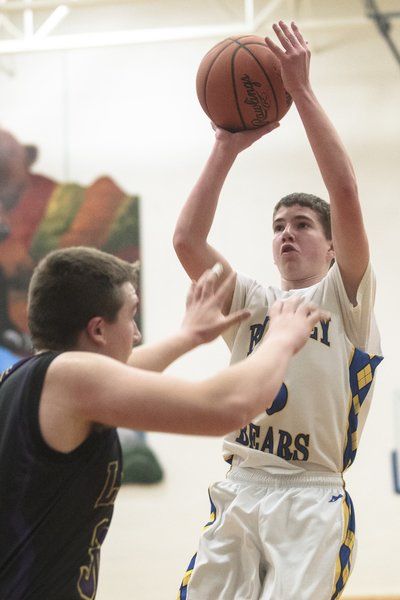 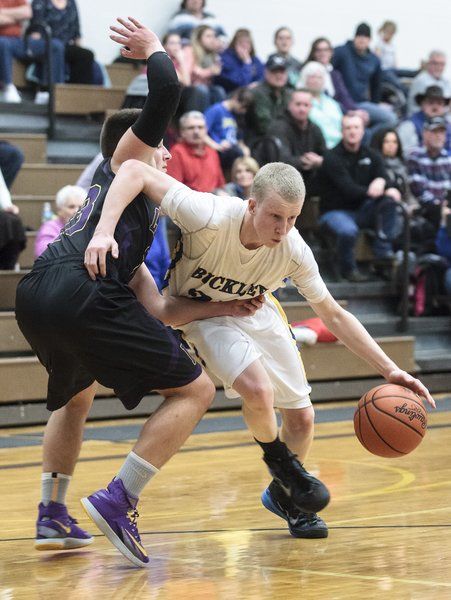 BUCKLEY — A $7,000 shooting machine maybe wasn't all Buckley needed to get over the hump in basketball.

But it's become a nice metaphor for the school's resurgence in the sport.

Prior to the season, second-year coach Blair Moss thought the device would be a boost for the program. Players went door-to-door around town, visiting homes and businesses seeking donations to purchase the expensive gizmo that helps players develop their shooting skills and provides coaches with data on their players' best shooting spots on the floor.

Within a week, they had the money.

"Those kids went out and raised that money themselves," Moss said.

Suddenly, the stands are nearly full for Bears games.

Another part is that people who donated money for the machine are coming to games. Folks who don't have kids in school or even usually care all that much about sports.

"We've had a lot of people coming to see how their donation for it is paying off," Moss said.

The device has high nets around the rim that forces players to have significant arc on their shots just to get to the rim. It also records data on success rates from different spots on the floor, all of which is saved on a portable USB drive. It's not all that uncommon for high school teams, but such a purchase is usually more doable only at larger schools.

Then there's the composition of Buckley's roster that has a lot of the town's fans excited.

The varsity roster features five freshman, three of whom start. The other two — Evan Marlow and Brock Beeman — see regular playing time. A sixth, Dawson Warren, would have been on varsity, but the JV team needed a lead guard to get the team into its offense.

There's only three seniors — Bryce Guernsey and Peter Hansen are the other two starters — and German Malte Mallwitz.

"They have the highest ceiling I've seen in awhile," Leland coach Jon Kiessel said. "Those boys can shoot it. I thought we defended pretty well, but you can only do so much when all five guys can put the ball up from 20 feet."

The Bears do have trouble with taller teams. Onekama, Frankfort, Glen Lake and Manton — the teams that managed to beat them — all have players in the 6-5 range or taller. Mallwitz is Buckley's tallest player at 6-3, and the inexperienced foreign-exchange student doesn't see much playing time. None of the rest of the team is above 6-1.

So the Bears play an up-tempo offense that's exciting to watch.

They press. They trap. They run. They jack up a lot of 3-pointers.

"We're just blazing speed and get up on your horse and go," Moss said. "That's our game plan. I'm not hiding anything. This is all we've got."

Moss took the job right before last season after a two-year hiatus from coaching. Prior to that, he was at Benzie Central for 12 years.

In last year's 1-19 season, the Bears' only win was against Northport — by 40 on the road. Moss said he apologized to the Wildcats coach after the win.

"We took it on the chin last year," Moss said.

The team has since lost 12 players from the program.

"I had to play these freshmen," Moss said. "I've been waiting to play them. We're going to live and die by these kids.

"These kids are passionate about the game. They work really hard, they listen, they're coachable. And they're good people and good students off the court."

Against league foe Leland, the three freshmen and Guernsey scored 65 of the team's 71 points — the most Leland had given up this season.

"These kids, they know how to play basketball," Moss said. "Sometimes, I just sit back and watch."

"He doesn't ever sit back and watch," assistant coach Marvin Jones quipped.

The Class D Bears had a breakout season in 2010, winning both district and regional titles for only the second time in the program's 102-year history. Then the team slid back and was consistently near the bottom of the Northwest Conference until this season.

"We told them they're not in seventh and eighth grade anymore," Moss said. "They have to put their big-boy pants on and let's go."

Now, they're in a four-team dogfight atop the league standings with Frankfort, Glen Lake and Benzie Central.

The kids are all right.