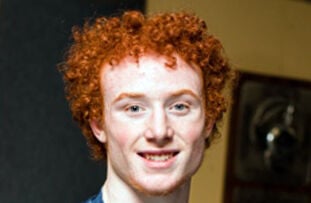 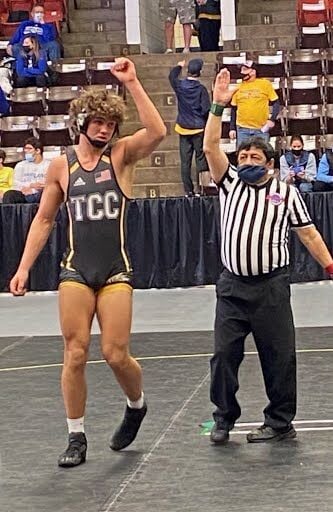 “It’s really kind of a weight lifted off my shoulders,” said Wilmoth, the TCSF junior. “I was looking forward to and visualizing this since I was in seventh grade.”

Wilmoth said Andy Simaz’ presence had to have intimidated opponents. He said Andy watched over 10 hours of Wilmoth’s film in preparation of coaching him Saturday.

“Any position I was in and I was uncomfortable, he (Andy) coached me through that and coach (Mike) Simaz,” Wilmoth said.

Wilmoth beat wrestlers from Hesperia and Hanover Horton by decisions, 9-1 and 10-4, then topped Bryce Cheney of New Lothrop in overtime 6-4 for a finals berth.

“In the finals, I was all fired up and pumped up, I just went as hard as I possibly could,” Wilmoth said. He major decisioned AJ Baxter of Clinton 14-2.

Wilmoth (31-6) was the second TC wrestler to appear in a state final match.

Cotton (28-1) finishes his sophomore campaign with one loss — the state championship. That season included a win over Rojas (29-2) earlier this season when he was ranked No. 1 in the state.

“I don’t think the match ever got away from me,” Cotton said. “Honestly, I think I went out and wrestled hard. At the end, I fell short. A couple things to work on, a couple moves I didn’t hit properly. Stop moving my feet was the biggest thing and he (Rojas) took advantage of that because he’s a good wrestler.”

Cotton, who entered the bracket at 189 as the top seed, cruised into the state finals.

He started off the day with a first period pin on Alec Schulte of Hudsonville, beat Drew Grup of Temperance Bedford in the third period by technical fall 22-5 and pinned Blake Williams of Belleville at 1:59 to advance to the finals.

Rojas pinned each of his opponents Saturday en route to a title as well. His match with Cotton was the only one throughout the individual postseason to go the distance.

“The season’s been great,” Cotton said, who improves on a seventh-place finish in 2020.

Mancelona had Gage Tipton win an eighth-place medal at the 119 weight class at the Division 4 finals.

Tipton received a first-round bye, then lost in the quarterfinal round and pinned an opponent from Bangor at 2:48 in the blood round for his only win on the day. He lost Chase Nickerson of Vassar in the 7th place match in a 9-4 decision to finish eighth.

Mancelona’s Wyatt Fleet went 1-2 with a win over Nolan Lange of Byron 2-1 in the first consolation round. His season ends at 19-9.

Traverse City St. Francis sophomore Josiah Schaub posted a 1-2 record, including a pin in 4:03. He finishes the season 28-9.

Austin Bills also represented the Trojans at the finals at 171, but fell in both matches in a senior-loaded bracket.