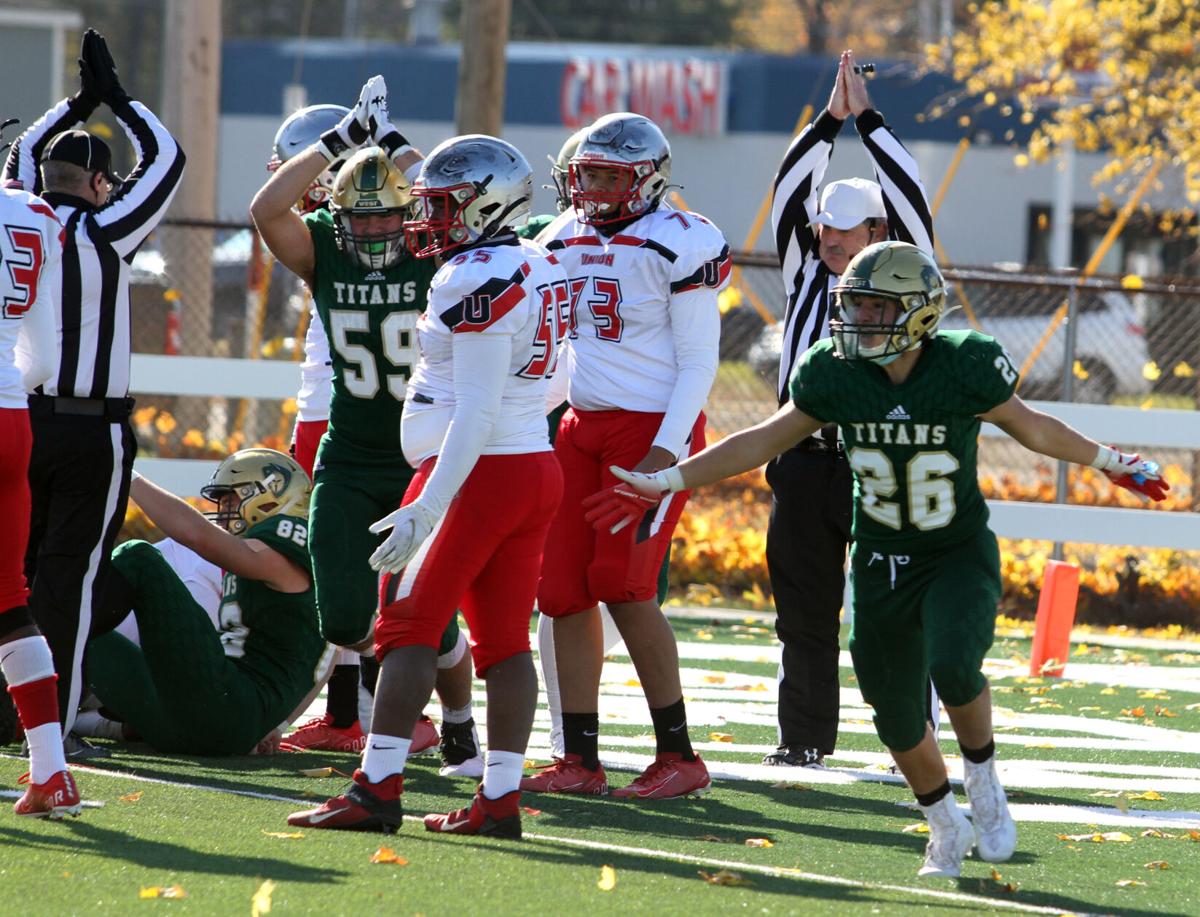 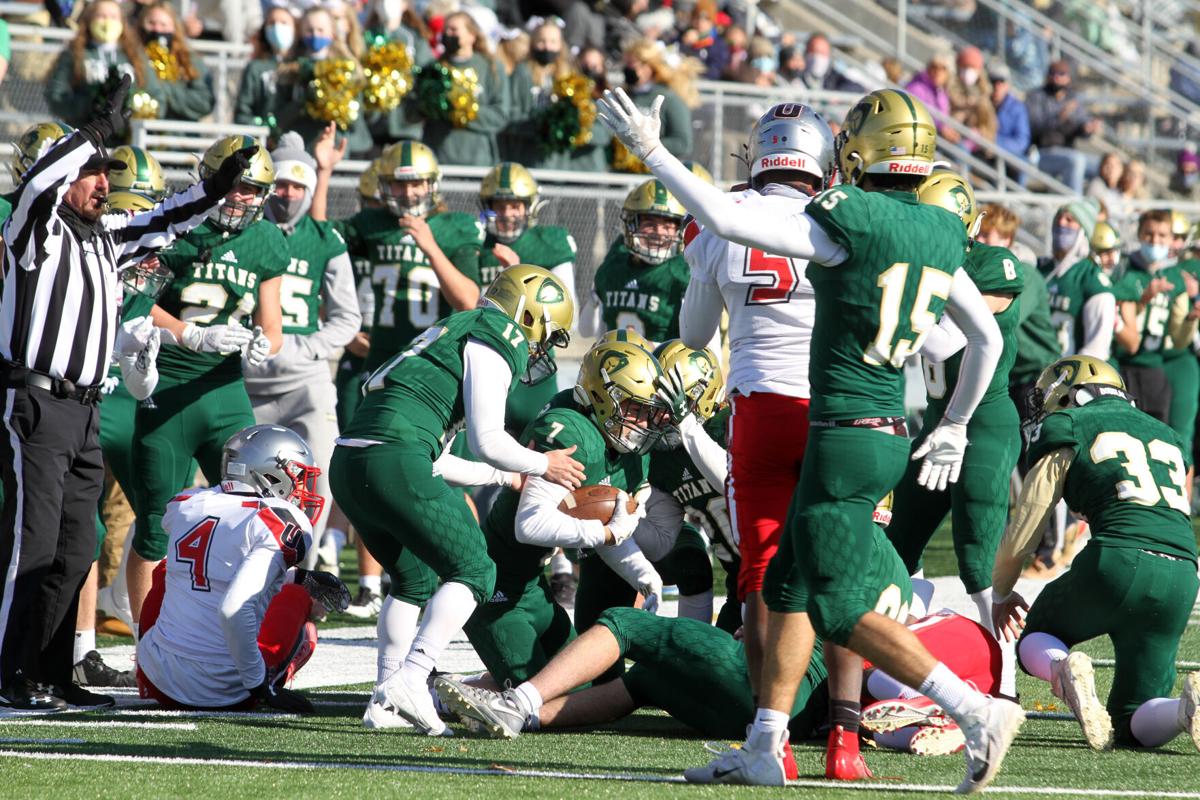 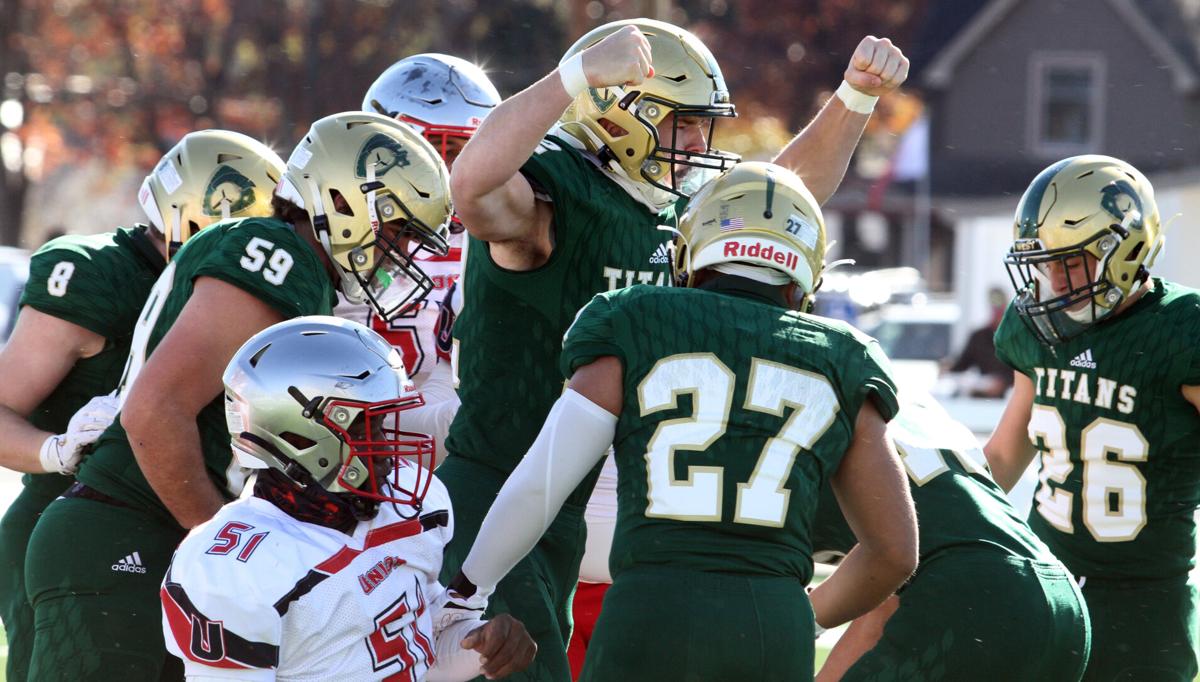 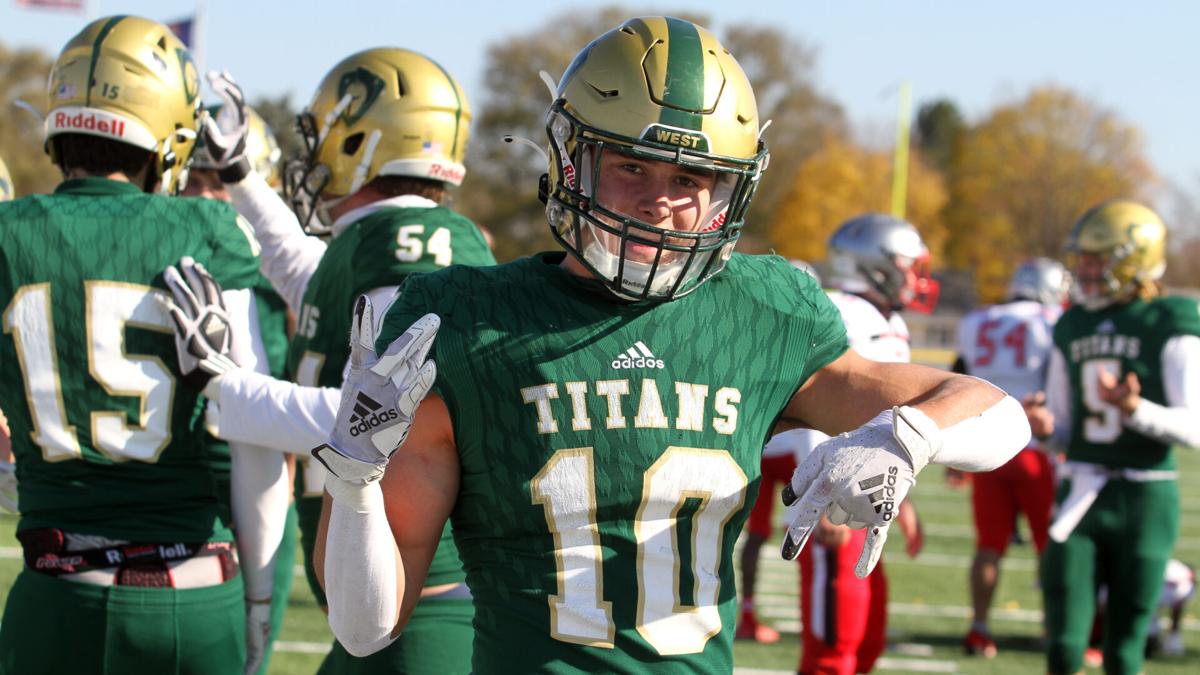 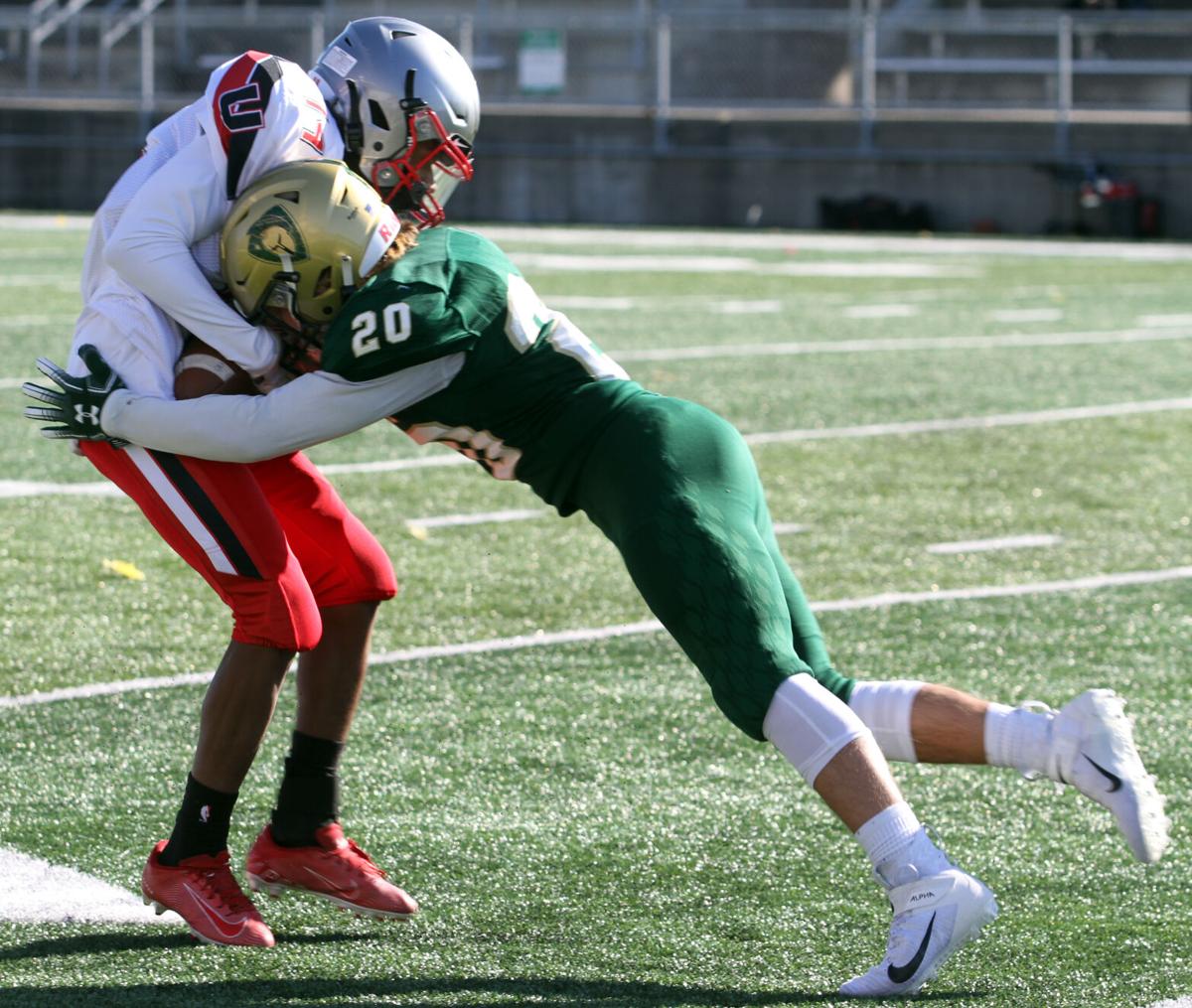 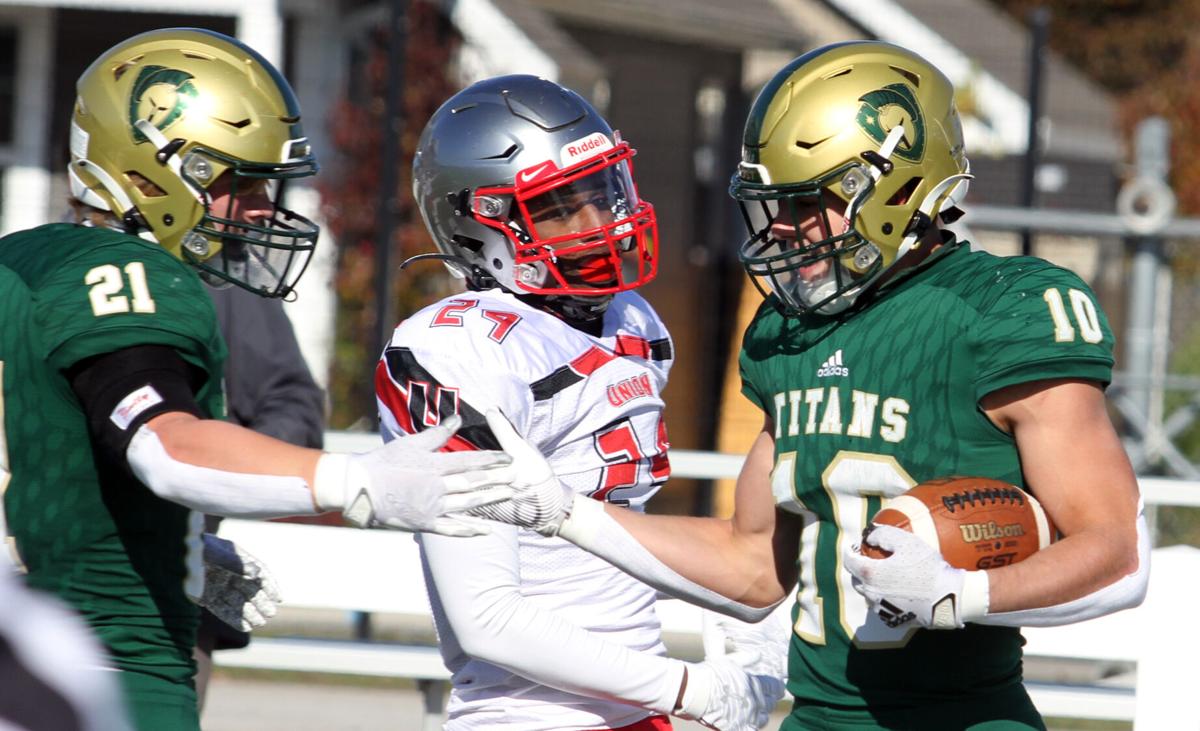 The Titans held Union to negative-39 yards in the first half in Saturday’s Division 1 football contest.

“It’s really mentality,” Titans senior offensive tackle Zack Konchek said. “We wanted to come out and be as physical as we possibly can. I felt like we were able to get off the ball faster than them.”

West (6-1) moves on to play at second-seeded Grandville (6-1) next week in the district semifinals.

The Titans scored the first four times they possessed the ball — and then once when they didn’t — to lead 30-0 with almost 10 minutes left in the first half. Union (1-6) didn’t manage a first down in the first half, with the exception of one from a West facemask penalty.

“Great team defense,” junior defensive back Remy Schultz said. “We emphasized playing as a team all week. And I think we really did that. We just play as a team and we executed.”

Schultz responded to Union’s first score of the game with an 84-yard kickoff return for a touchdown to lead 65-7 with 5:10 remaining.

“I just saw an open gap,” Schultz said. “I had my opportunity and wanted to take it.”

The Red Hawks ended the game with 159 yards of total offense, primarily on two plays — a 49-yard TD pass from Tommy Stevens to Twanyea Smith and a 65-yard TD run by Stevens with 30 seconds left. The Hawks didn’t even have enough time to attempt their second extra point because of the running clock.

Christian Boivin and Patrick O’Connor traded finishing off drives in the first half, with each scoring three touchdowns. Boivin struck on runs of 14, 17 and 6 yards, while O’Connor logged TD runs of 57, 9 and 11 yards for a 51-0 halftime lead.

“We talked about just being a team this week,” West head coach Greg Vaughan said. “After last week with Petoskey jumping out on us and and getting after us, we felt like we weren’t physical enough. And that was something we really honed in on as a team, to be physical. And I think both sides of the ball ended up controlling things pretty well.”

Senior linebacker Foster Snell notched a safety early in the second quarter for a 30-0 lead, and Garett Schuler’s interception and return set up one of Boivin’s TD runs.

Grandville beat Grand Haven (0-7) 61-26 in its Friday district opener. Rockford (5-0) and Hudsonville (5-2) await in the district’s other half. Grandville’s only loss came to Rockford, although the Rams had two open weeks ahead of the contest to prepare.

“They run the T like it should be,” Vaughan said of Grandville. “They’re very physical. They put up a lot of points on a lot of people. We’re going to have to make sure that we pull our big boy pants on and be ready for a battle, just a physical battle.”