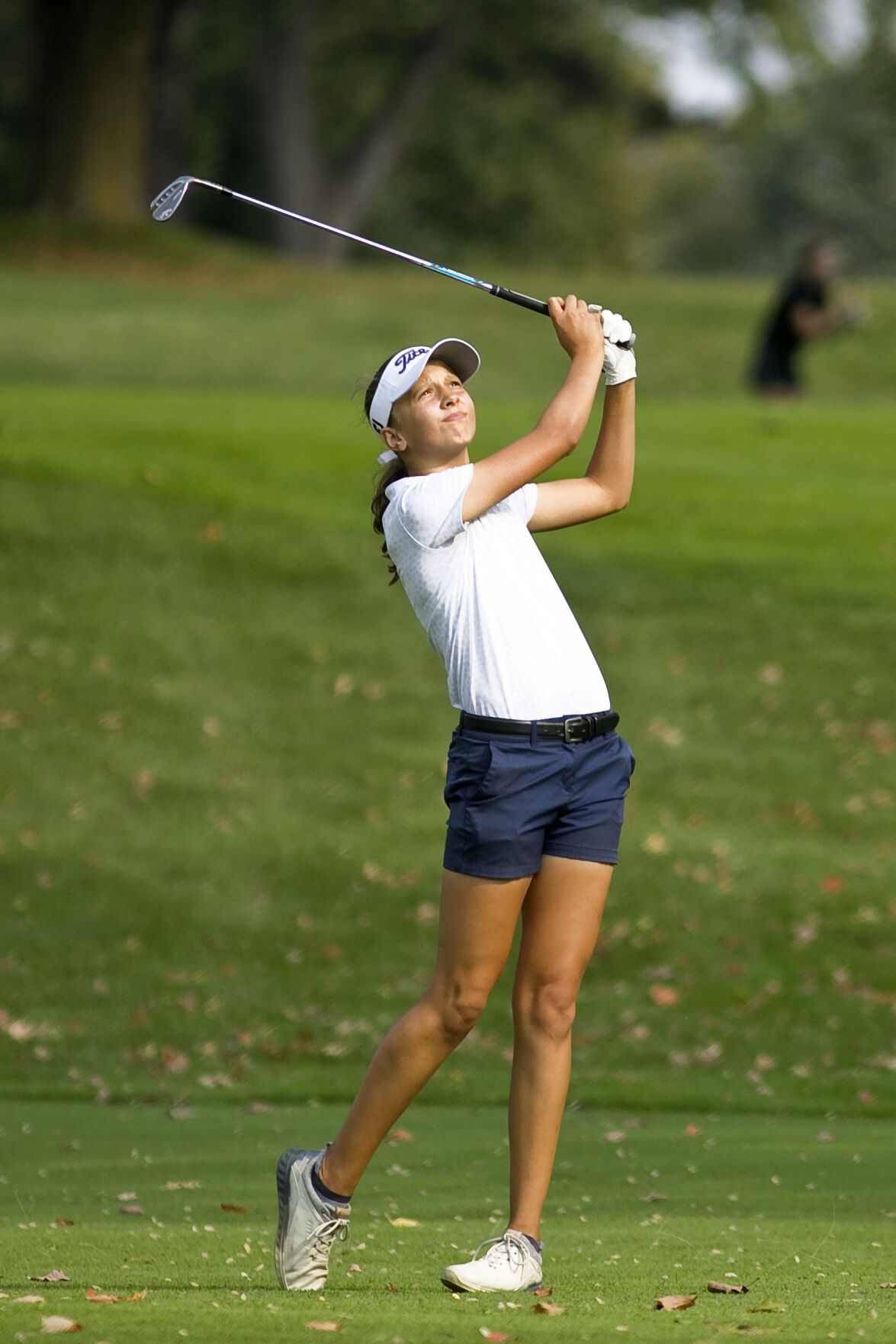 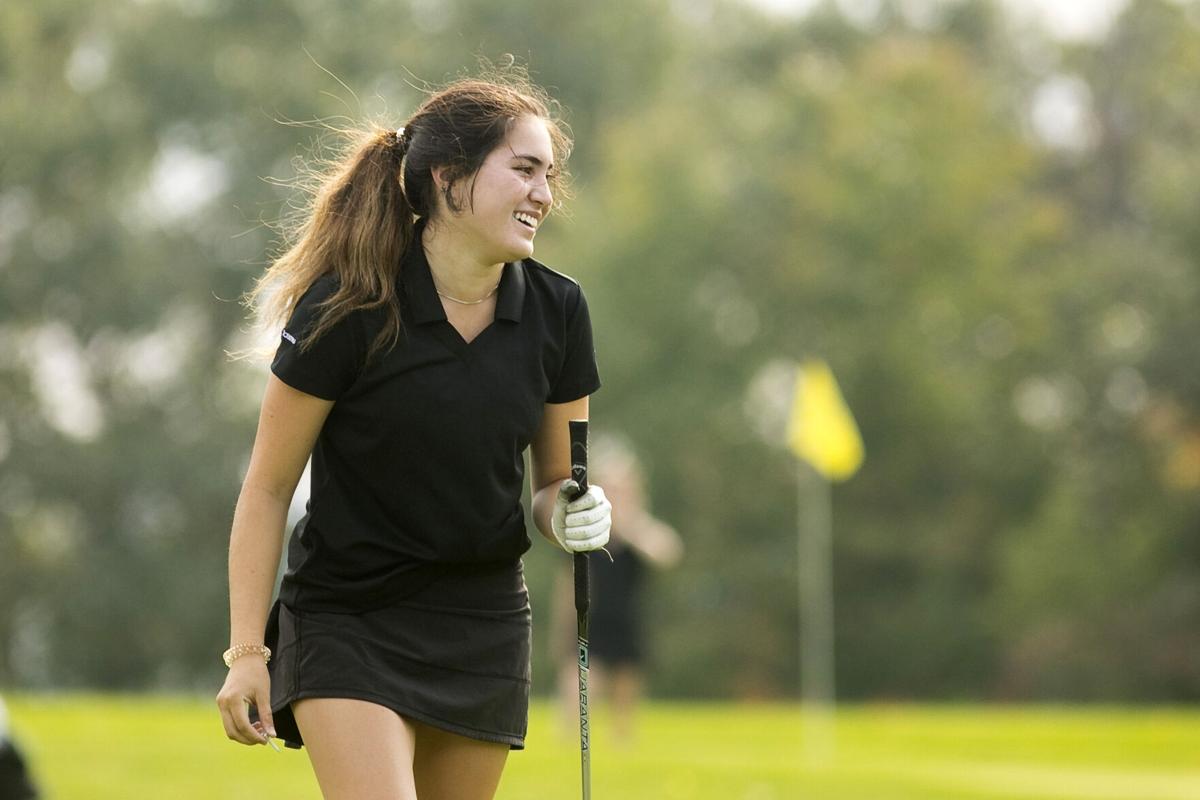 Traverse City Central’s Grace Maitland smiles after teeing off on the ninth hole during the Big North Conference golf finals on Monday at the Traverse City Golf and Country Club. 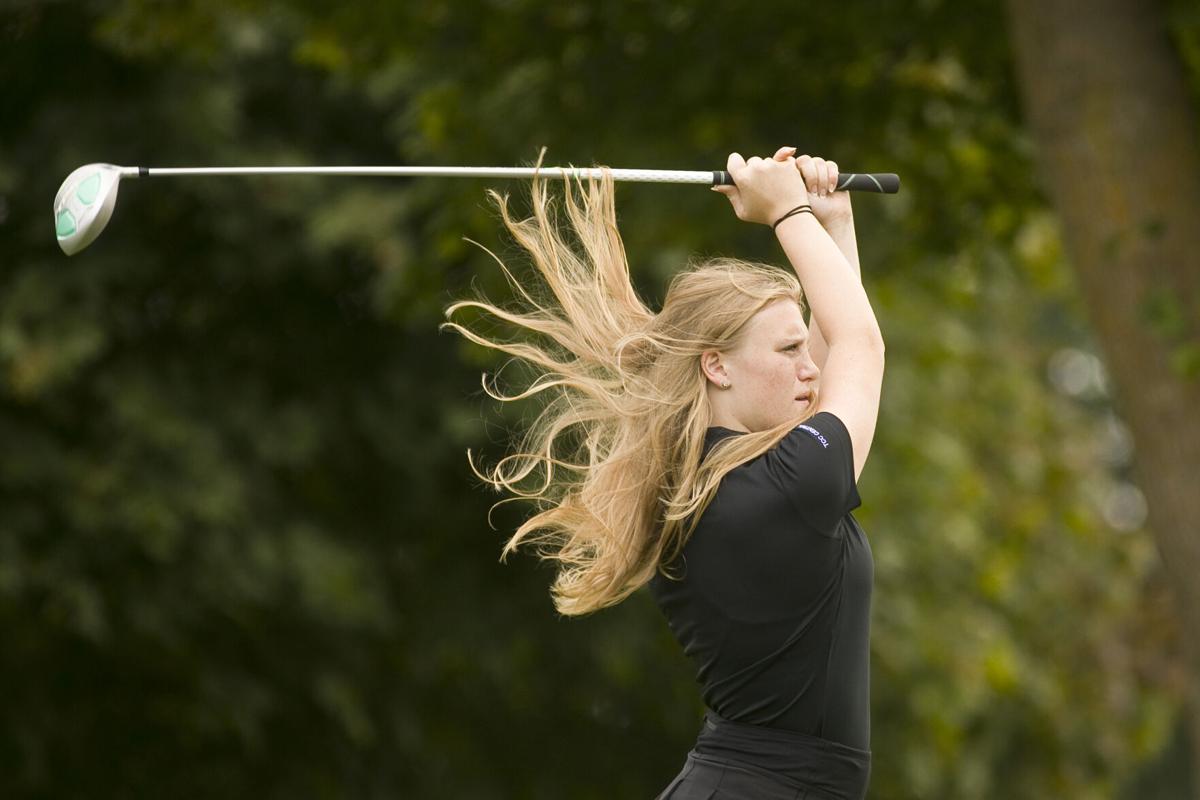 Traverse City Central's Kennedy Clark tees off on the first hole during the Big North Conference golf finals on Monday at the Traverse City Golf and Country Club. 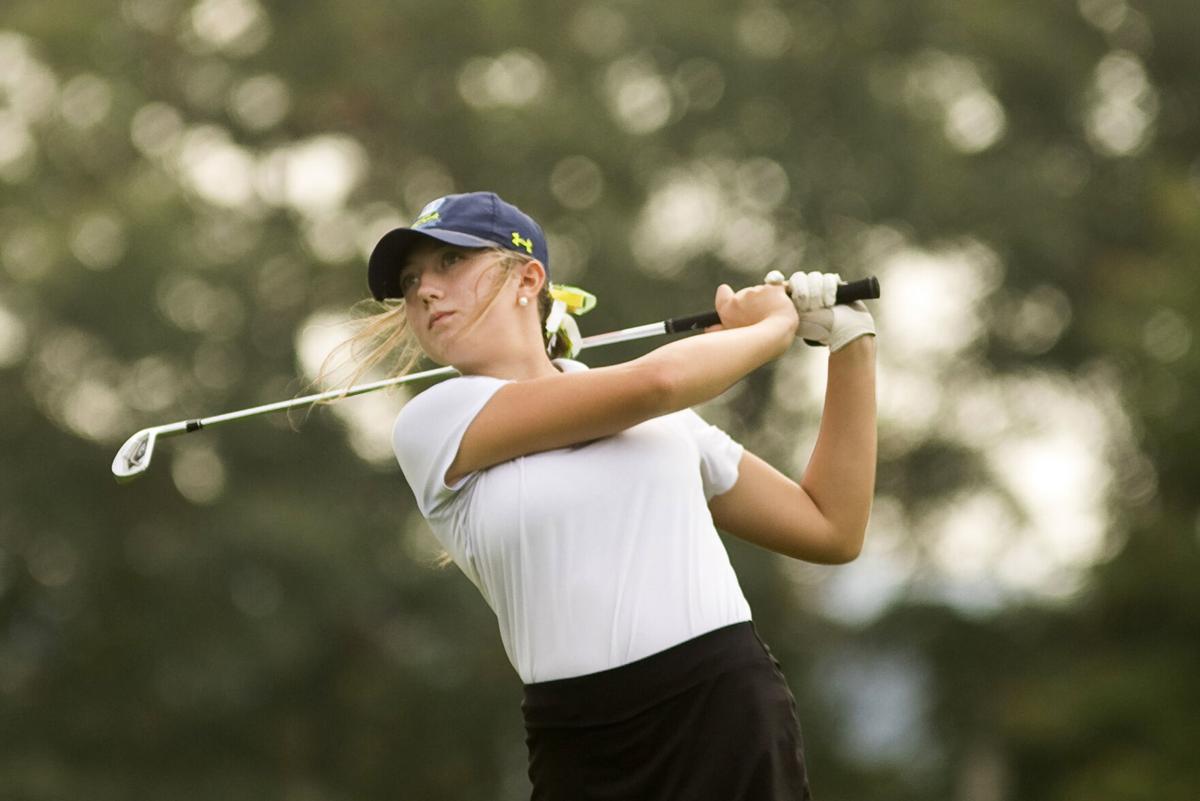 Traverse City West's Ainslee Hewitt tees off on the ninth hole during the Big North Conference golf finals on Monday at the Traverse City Golf and Country Club. 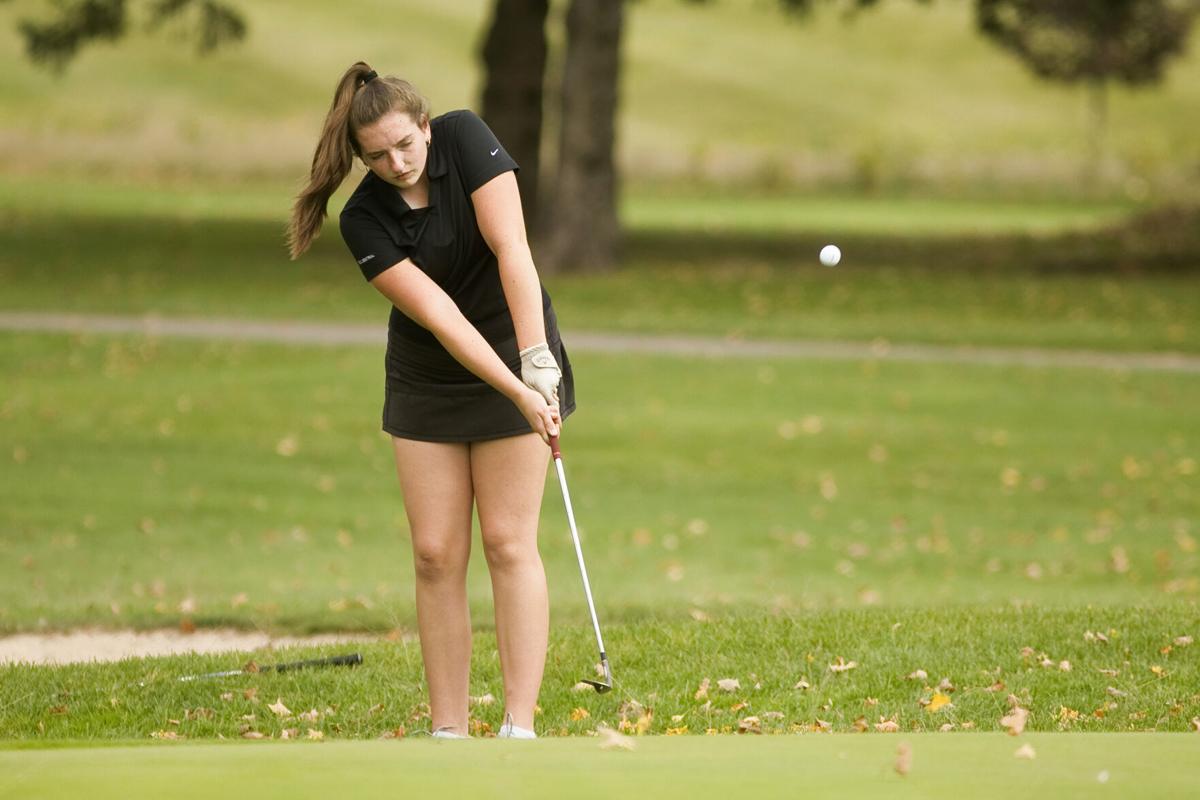 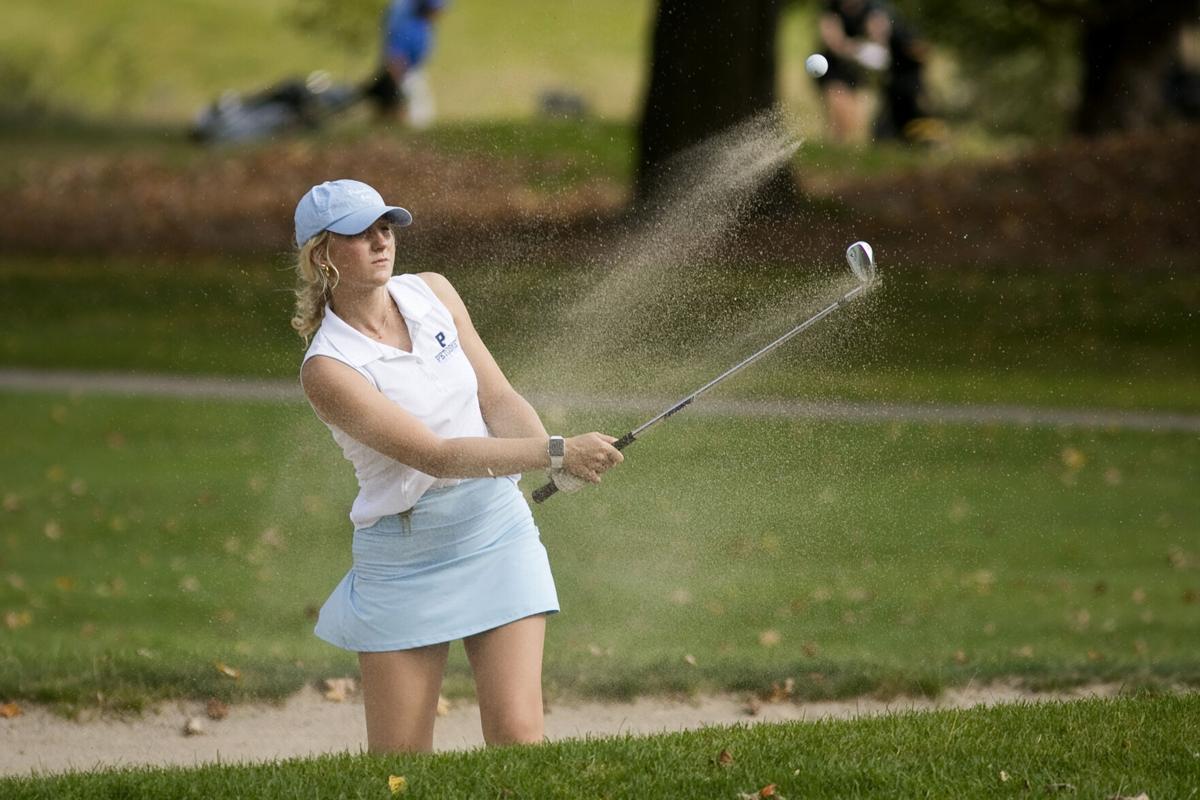 Petoskey's Aubrey Williams hits from the sand on the tenth hole during Big North Conference golf finals on Monday at the Traverse City Golf and Country Club.

Traverse City Central’s Grace Maitland smiles after teeing off on the ninth hole during the Big North Conference golf finals on Monday at the Traverse City Golf and Country Club.

Traverse City Central's Kennedy Clark tees off on the first hole during the Big North Conference golf finals on Monday at the Traverse City Golf and Country Club.

Traverse City West's Ainslee Hewitt tees off on the ninth hole during the Big North Conference golf finals on Monday at the Traverse City Golf and Country Club.

Petoskey's Aubrey Williams hits from the sand on the tenth hole during Big North Conference golf finals on Monday at the Traverse City Golf and Country Club.

TRAVERSE CITY — Whispers of “She’s only a freshman” came from several groups at the same time as Grace Slocum walked up to accept her championship plaque.

“I feel it’s good to end on this note to go into states,” Slocum said. “I hope that our team plays well and I want to be top five, definitely.”

Slocum said she felt good about her long game, but needed to clean up her short game before the the state finals. She qualified as an individual after finishing runner-up in her regional.

Slocum went into the final hole with a two-shot lead, and shot over the green on the 298-yard No. 18.

“I was pretty nervous to make up and down,” Slocum said.

But she was able to pitch back on the green sloping away from her and one-putted to finish off the one-stroke victory over Montague sophomore Mackenzie Goudreau. Slocum birdied the 155-yard No. 16 to give herself that extra shot over Goudreau.

Slocum won five of her eight tournaments this season, and head to the weekend’s state finals with her Gladiator teammates.

“I think she’s really excited,” said West junior Ainslee Hewitt, who played in Slocum’s group. “Especially as a freshman, state finals is pretty scary. I know for me when I was a freshman, I was pretty scared. She did have some questions, but I think she’s going to do great. She killed it here and she can kill it downstate, for sure.”

The eight-team tournament also served as the Big North Conference championship, and Traverse City Central snapped TC West’s stranglehold on the league title. Harbor Springs and Big Rapids also were scheduled to play, but didn’t show after failing to qualify for the state finals last week.

It’s the first time since 2012 a school other than West won the league (the BNC did not have a champion in 2013 and 2014 when Alpena did not field a team). West won the title every year the Dy sisters — Anika and Anci — played for the Titans.

“It’s great to have it back,” TC Central head coach Lois McManus said. “The girls worked really hard this season. They had two goals — win the conference and go to states. So they’ve accomplished both.”

“They seem to pick up a lot of slack,” McManus said of Rademacher and Maitland. “They always think they don’t play their best, but they always play their best for the day. Now, can they play better? They have in the past, but today they played their best. It’s what they needed to do.”

Central did it with a fairly young roster as well.

The Trojans feature only one senior in their counters in Maitland. Junior McKenzie McManus and sophomores Addison Balentine and Evelyn Nowicki round out Central’s top five.

“I’ve just been really proud of us lately,” Maitland said. “(Considering the COVID-19 pandemic), we haven’t been able to bond as much and I think that everybody has put in their time and effort to get to where we are. I think that it’s great for us because I’m the only senior on varsity, so the younger girls than me, they only have better things coming for them.”

“The new girls and even some of the returning girls just keep shooting their personal best, and then maybe a week or two later it’s personal best again and the next week, personal best again,” McManus said. “So they are improving so much. It’s fun to watch them develop and actually be so hooked on this sport.”

Maitland gave up her traditional No. 1 flight spot to Rademacher for the day, allowing Rademacher to play in a group with Slocum.

“I don’t really care about titles or positions,” Maitland said. “Sydney loves Grace Slocum, so I’m like, ‘Go ahead.’ I love playing with Hattie (Holmes) and everyone. It’s really just about the game; it’s not about playing No. 1 all the time. In the end, it’s about how your team does and how you contribute to it.”

Hewitt won the overall BNC crown with a league average of 81.8 shots.

“For me to get the win for the BNC just feels like such an accomplishment,” said Hewitt, wearing the Titan colors of green and gold in ribbons in her ponytail. “Especially with golf, we have our ups and our downs, and this just kind of signals to me that all my hard work is paying off.”

“They finished really strong today, which is good,” West head coach Karl Gagnon said. “I’m glad that in our last tournament they had a chance to come over here. Good golf course, they played well and I think they had a good time doing it. It was good day.”

Titans pick up second shutout in win over Gaylord

TRAVERSE CITY — Jacob Klingelsmith will be part of something special come Saturday.

BRETHREN — Colton Eckler was a little too much for Bear Lake.