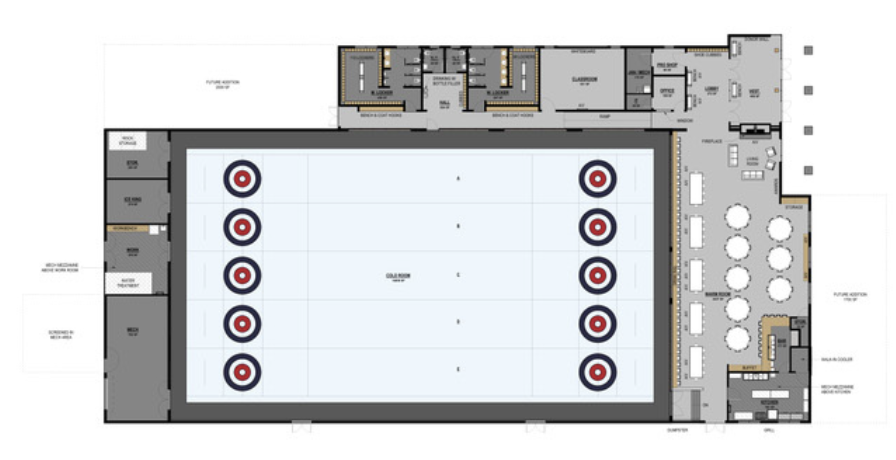 Renderings of the floor plans for the Traverse City International Curling Center. 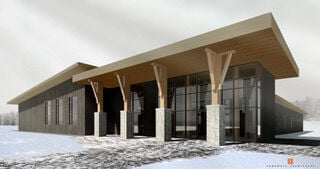 A rendering of the exterior view of the Traverse City International Curling Center. 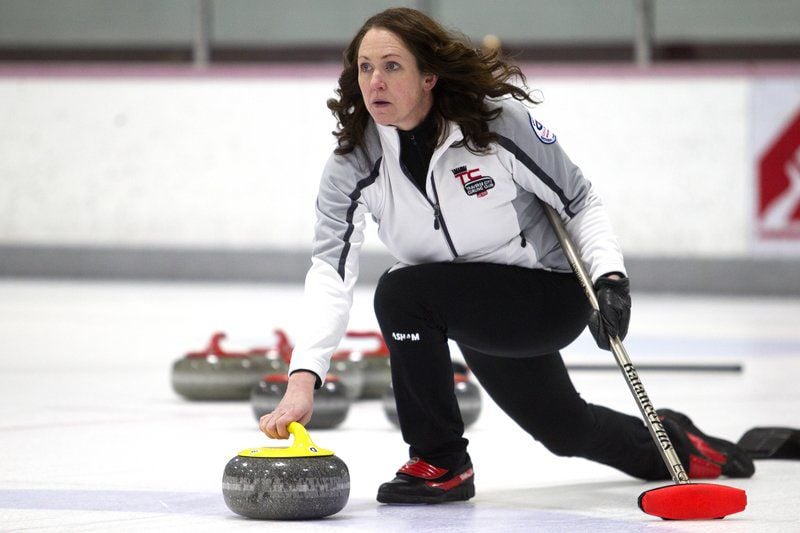 Jill Riecke, a seasoned curler, throws her stone down the ice during league play at Centre Ice Arena in Traverse City. Riecke has taught most of the curlers in the Traverse City Curling Club how to curl. 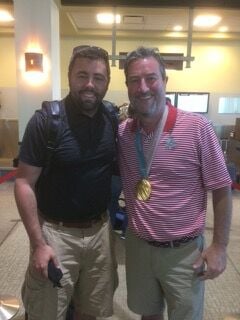 Renderings of the floor plans for the Traverse City International Curling Center.

A rendering of the exterior view of the Traverse City International Curling Center.

Jill Riecke, a seasoned curler, throws her stone down the ice during league play at Centre Ice Arena in Traverse City. Riecke has taught most of the curlers in the Traverse City Curling Club how to curl.

“How cool would that be?” said Piche, the founder of the Traverse City Curling Club. “That we have this homegrown kid from Traverse City who makes it to the Olympics.”

Plans have been proposed in hopes of raising $7 million in investments, grants and donations to create a Center of Excellence for Curling in the United States on a 4.3-acre plot of land at the Hammond Industrial Center.

Aside from being the home of the Traverse City Curling Club, the facility would have the capabilities to host USA Curling sanctioned competitions (juniors, wheelchairs, seniors, men’s, women’s and mixed doubles). The facility would also would be equipped to broadcast NBC Sports’ Curling Night in America — which draws about 100,000 viewers weekly.

The training capabilities at the facility could also serve as a home to current and hopefully future Olympic athletes, the club says.

Piche, who founded the club in 2014, said curling is fastest growing winter sport in America. Between NBC’s national telecasts of curling in Olympic years and interest the sport garnered after the U.S. Men’s Olympic Team won a gold medal in 2018, membership with USA Curling has more than doubled in six years.

Cara Colburn, the club’s President and also Piche’s sister, said a lot of that can be attributed to Curling Night in America. That’s why, four years ago, Colburn and the TCCC attempted to make a bid for NBC Sports to film an event for the show at Centre Ice Arena.

“We got very far along in the process and were one of the finalists,” Colburn said. “NBC Sports came here to Traverse City to look at the arena and the facility at Centre Ice. They shoot this particular program in August.”

Even though Colburn said producers loved Traverse City as a location, NBC declined to film the show in Traverse City because Centre Ice was not capable of maintaining the humidity conditions on the ice needed for curling in the middle of August.

Curling ice and hockey ice are not one and the same, Colburn said. Those same humidity issues do not exist in the winter because the environment outside the arena is optimal.

“The humidity and the environment around the ice is really important in curling,” Colburn said. “If there’s too much moisture, the rocks don’t fly properly. It has to be very dry.”

NBC Sports was already interested in Traverse City as a location, so Colburn contacted the producers to inquire about what they could do to make it easiest to film a show at the Cherry Capital. The plan is for the new facility to have camera bays arranged so that production companies can simply plug in and record without much setup.

The TCICC would essentially be a curler’s dream come true. It will be equipped with five regulation curling sheets, locker rooms, pre-wired camera stations, a camera above the curling house (the target), an ice management program and Olympic-grade training capabilities.

Few facilities in the nation would have the same capabilities in the summer. Colburn says that could attract athletes to train in Traverse City year-round.

“The competitive curlers will come here in the summer because there’s no ice,” Colburn said. “Most of them close down. There’s very few open in the summer.”

Piche said he can already picture groups of children practicing the sport after school or perhaps visiting the facility at lunchtime to a group of seniors finishing up their morning league. That’s because the TCICC is planned to be a center for the community, not just for the TCCC.

“When we do curling in the wintertime here in Traverse City, we have people that just come out to the stands, and they say, ‘Hey! What are you doing here? We saw there was curling tonight, we just kind of came out to watch, is that OK?” Piche said. “There’s a fascination in the game because we don’t really know it that well as Americans.”

The proposed 25,500 square foot facility would be a plot of now-undeveloped land at Hammond and LaFranier road federally-designated as an Opportunity Zone. That means the land earned distinction from the 2017 Tax Cuts and Jobs Act to provide significant tax benefits to spur economic development.

Investors on the TCICC would see deferred capital gains taxes until at least 2026. The TC Curling Club would buy back the investment at Year 10 at 160 percent. Of the $7 million, $4.5 million would go towards the building of the facility, $500,000 towards the purchase of land and $2 million to purchasing curling-specific equipment.

Organizers said the club must raise $2 million in order to proceed with the project. If that goal isn’t met by March of 2021, investors can request a refund. A minimum of $25,000 is required to be an investor, and Colburn said there are already multiple investors with serious interest.

If that campaign is not successful, it has a bank in line ready to provide necessary loans. It can’t simply increase programming within Centre Ice because the ice space and time the club is allocated is limited.

“Once the facility is up we can start to really grow our programming, grow our membership, and reach our goal,” Colburn said. “But we have to get a facility up.”

The club anticipates breaking ground on the facility as soon as August, opening around the Fall of 2022.