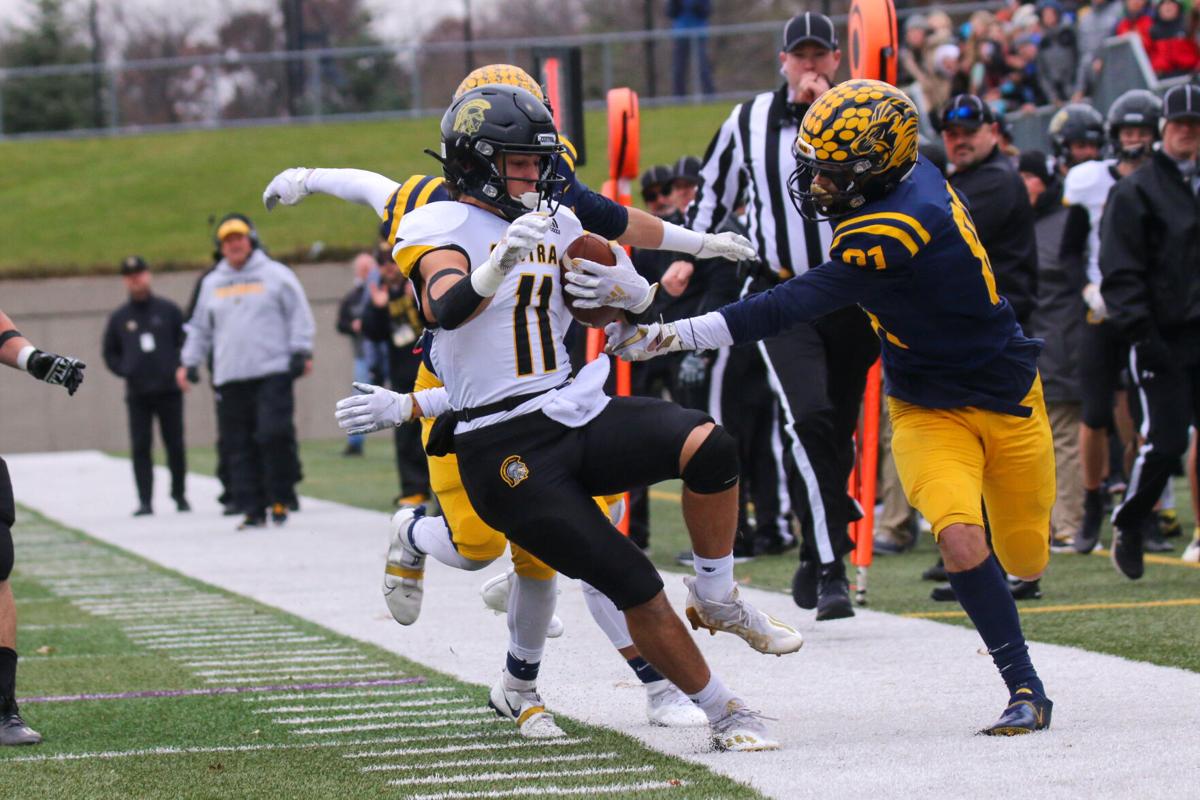 Traverse City Central’s Carson Bourdo (11) carries the ball up the sidelines during the Trojans state semifinal win over South Lyon, Saturday in Greenville. 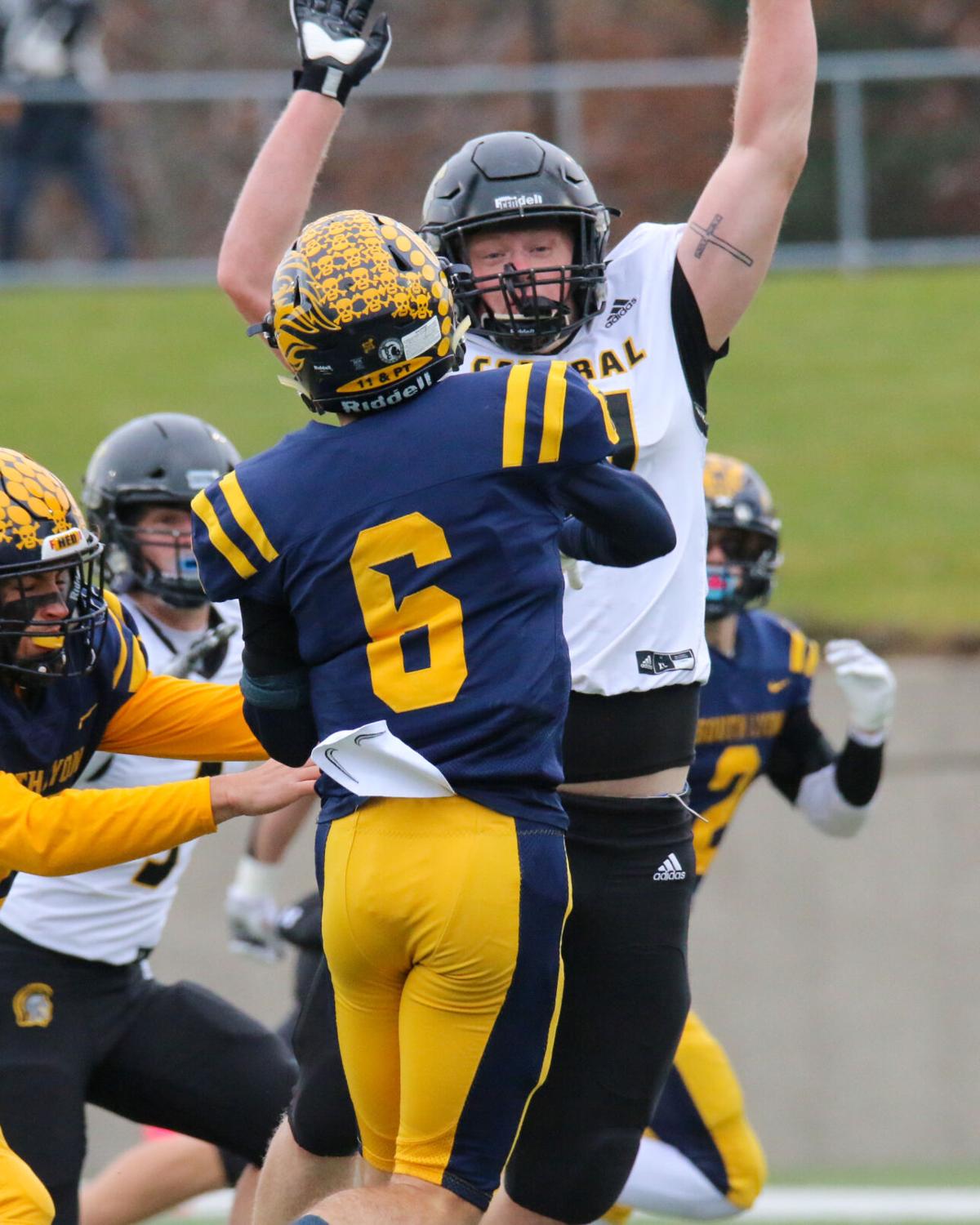 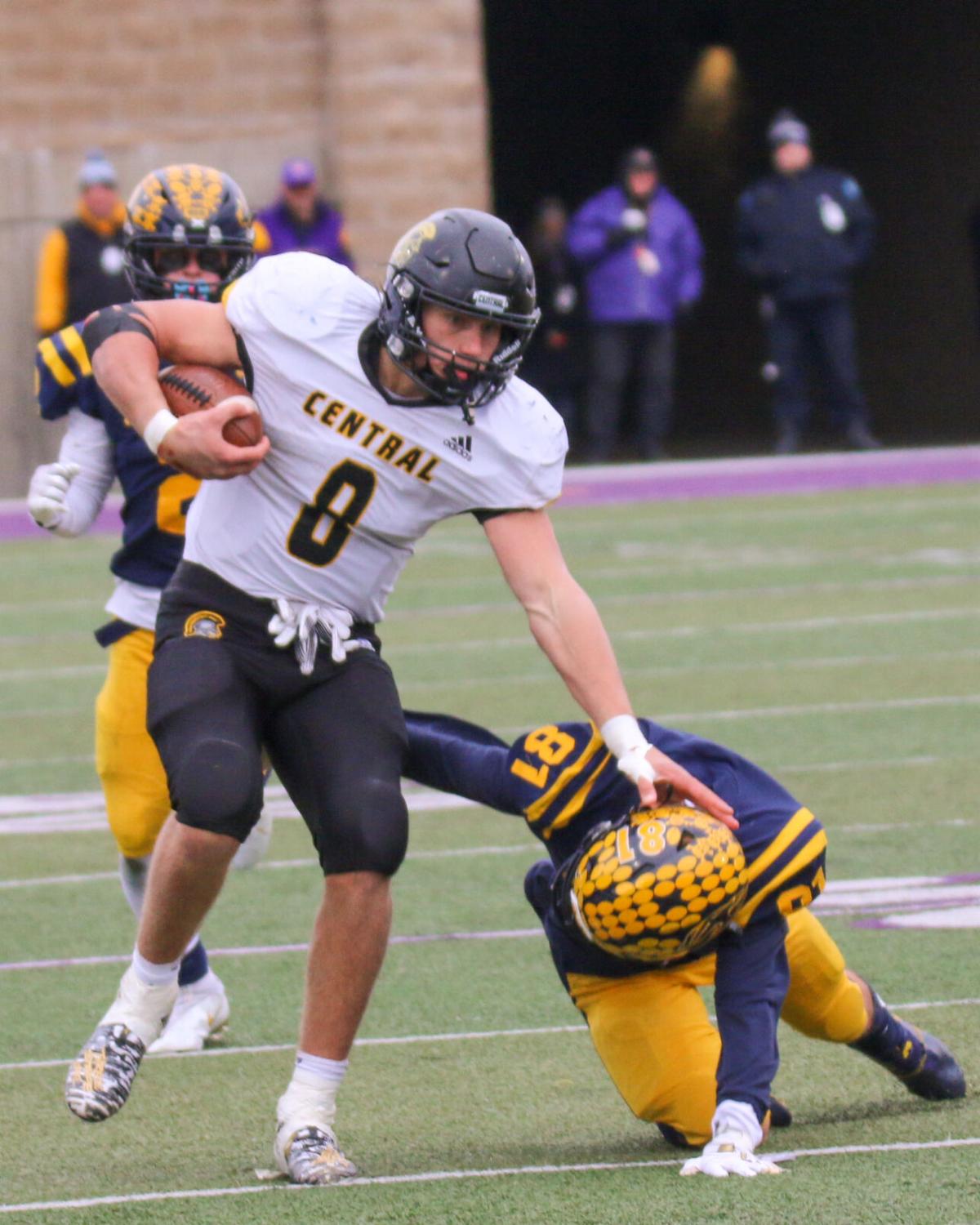 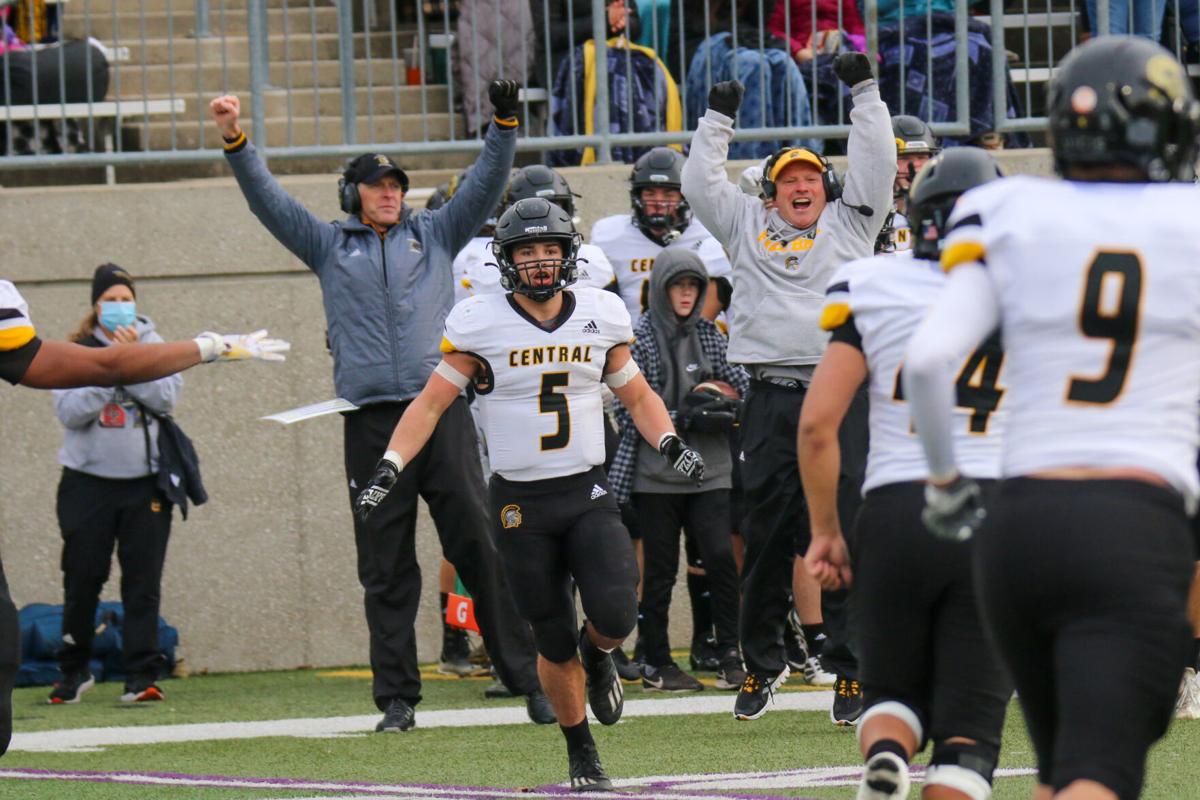 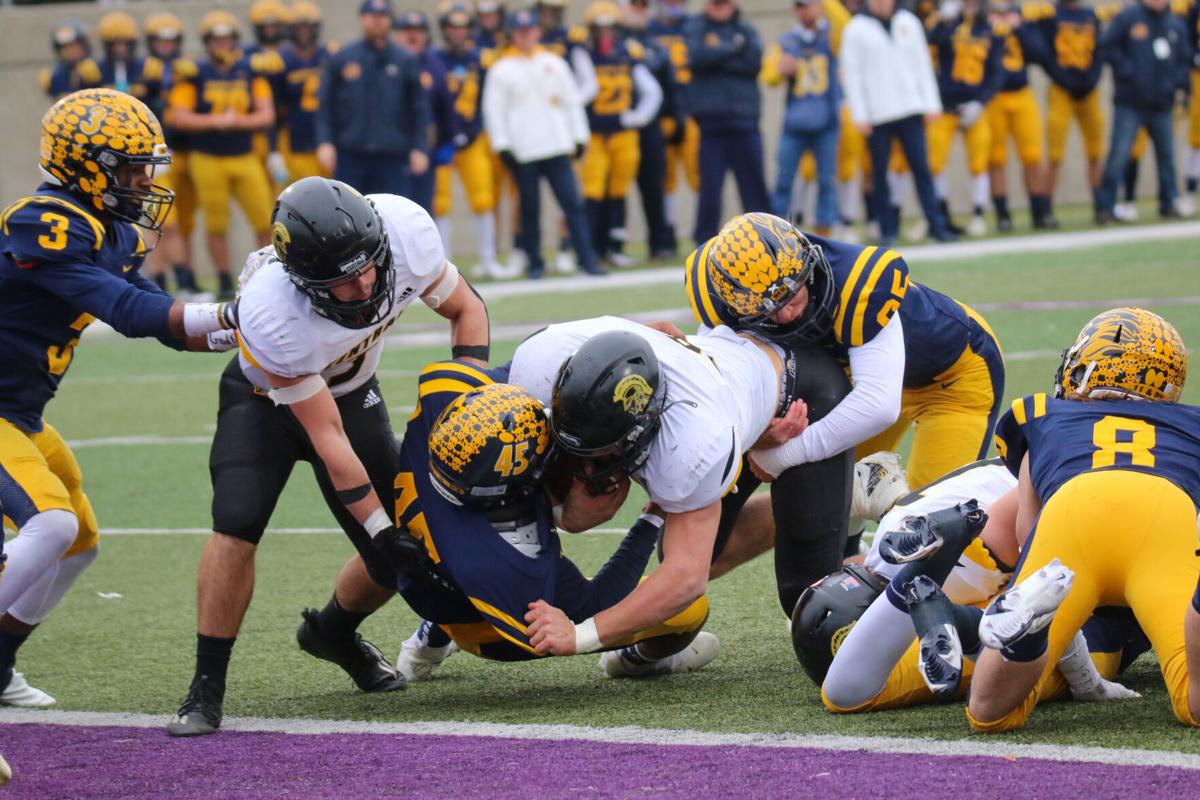 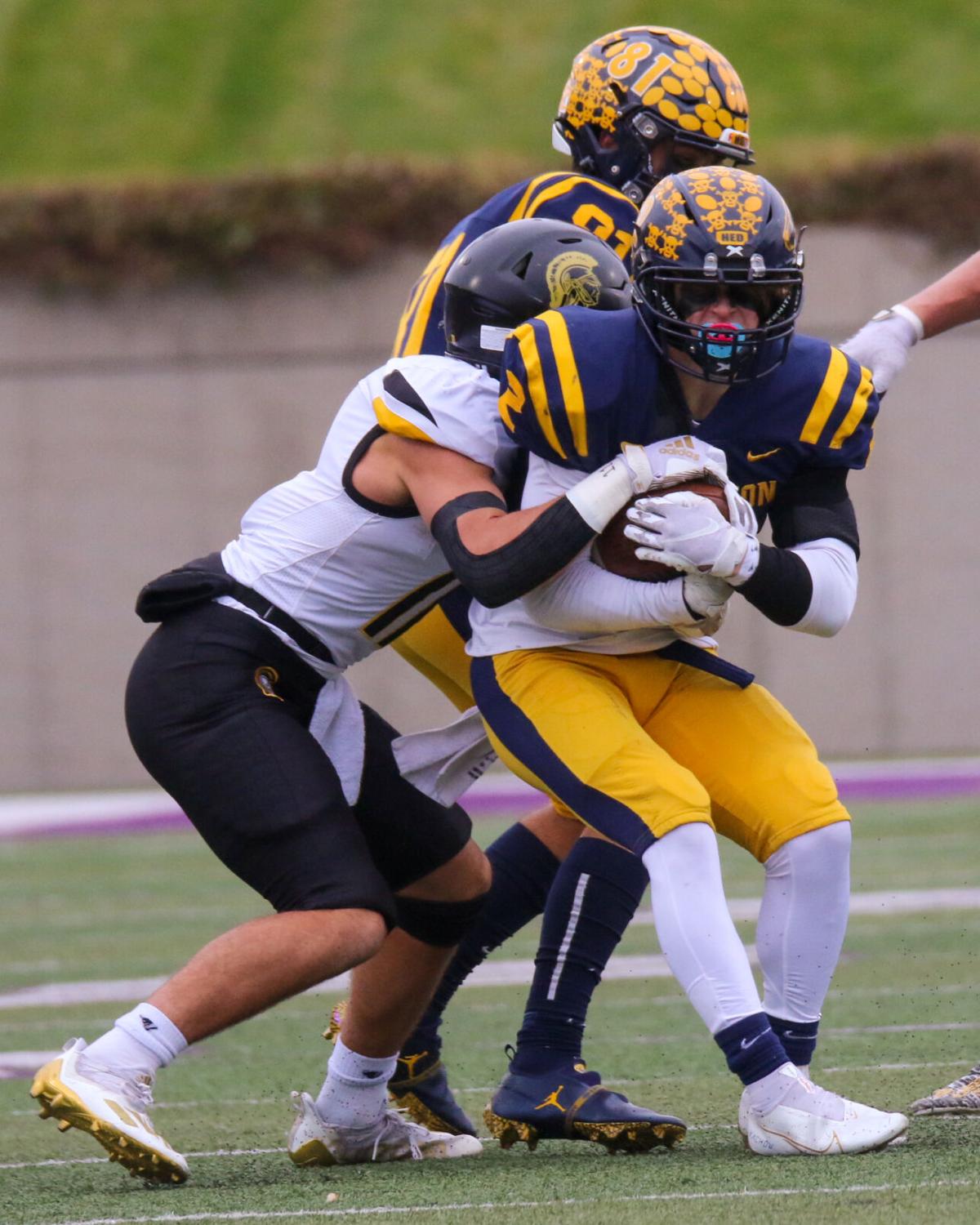 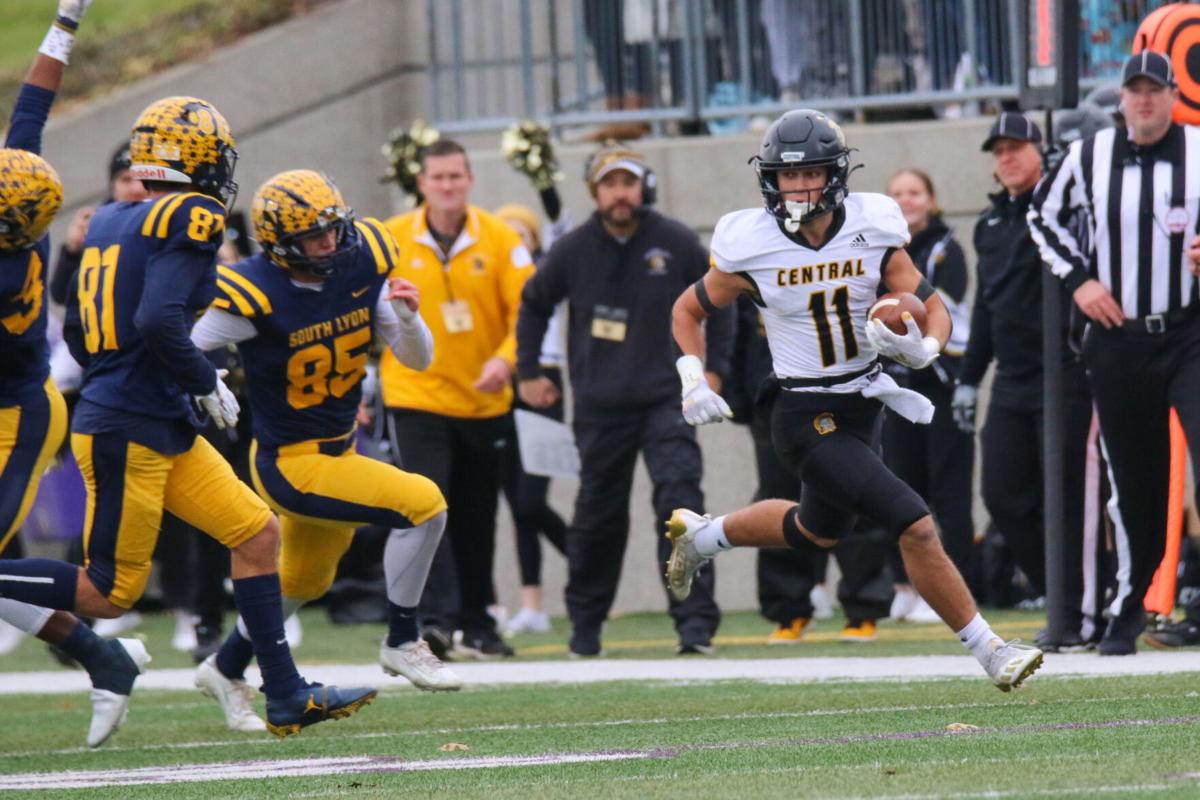 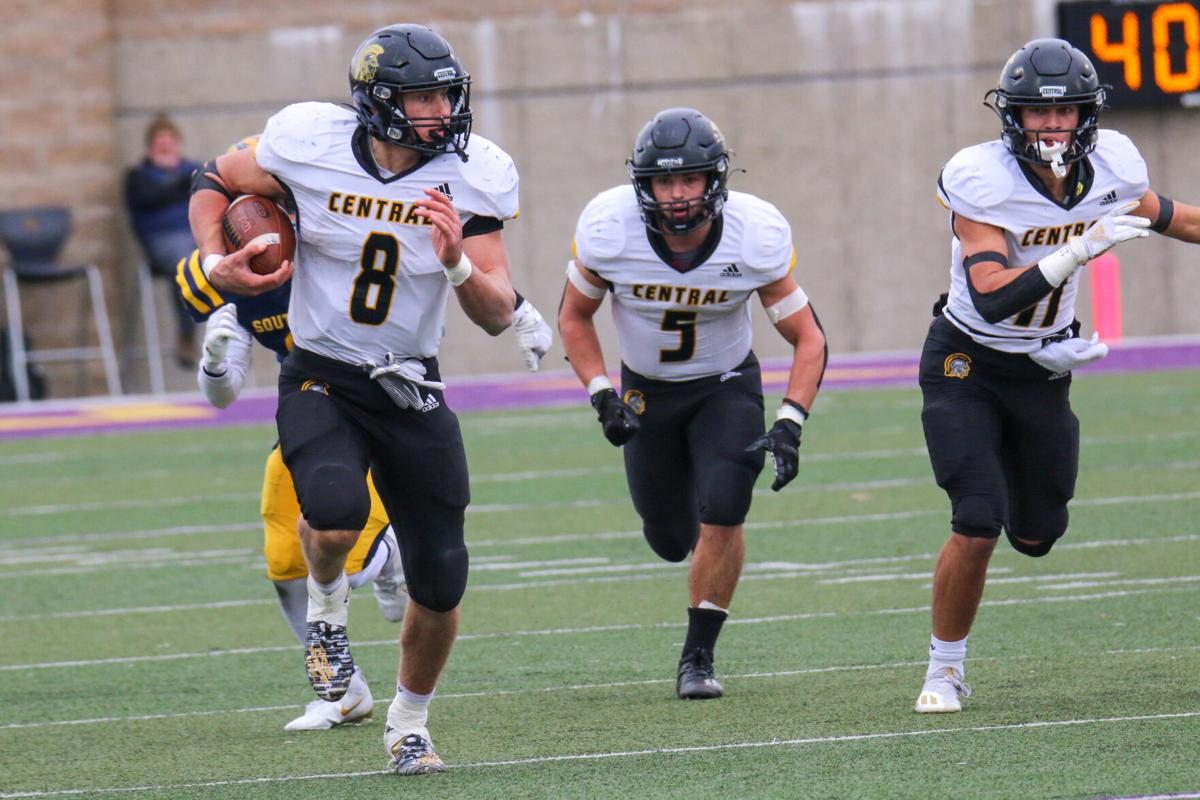 Traverse City Central’s Carson Bourdo (11) carries the ball up the sidelines during the Trojans state semifinal win over South Lyon, Saturday in Greenville.

“The goal wasn’t to get there, the goal was to win it.”

So after TC Central’s 56-20 win over South Lyon put the Trojans in the state finals for the first time since the 1988 team that last also won, Clark echoed Ooley’s sentiment in the Trojans post-game huddle Saturday afternoon at Greenville’s Legacy Field.

“Last year they thought they could do it. This year they knew they were going to it and they played with that attitude all year long,” said Clark, the ex-Trojans head coach who hired current head coach Eric Schugars onto his staff along with current assistants Doug Gle and Mike Gle.

Senior Josh Burnham, a Notre Dame linebacker commit, sprinted out to an emotional Schugars to leave the game with about five minutes left on the clock as the Trojans held a 43-point lead. Schugars took Burnham under his wing as both headed to the sideline, with a running clock the only thing separating the Trojans from a trip to Ford Field.

Burnham reiterated Clark and Ooley’s sentiments after the game, too.

“We were just happy for each other. This has been a long time goal,” Burnham said. “Our goal wasn’t to go there, it was to do our thing and win it.”

TC Central (12-1) moves on to meet No. 1 Warren De La Salle (12-0) Friday afternoon for the Division 2 title. The Pilots routed Livonia Franklin 49-14 to make their fourth trip to the finals in five seasons. They lost last year’s title to Muskegon Mona Shores, the team that ousted Central in the semifinals.

“I told our kids we have not played our best game yet. That’s the scariest thing,” Schugars said. “I hope we can do that next week — six days away.”

It was a running clock pretty much to start the second half as the Trojans took a 42-7 lead into the locker room, allowing South Lyon to gain a handful of first downs in the first half and one late touchdown throw caught by Gavin Limotte.

But the closest Central let South Lyon come in the second half was 29 points. It showed a flipped script following last year’s halftime lead over Mona Shores that was erased in a 43-30 loss to end TCC’s season a game short of Ford Field.

“We knew that this happened last year. We didn’t want to come in thinking the game was over,” Burnham said. “We knew we just had to come out and keep playing like it was 0-0 because I mean, we knew what that felt like last year. We weren’t going to let that happen again.”

Burnham scored three rushing touchdowns (1, 2 and 15 yards) and led the game with 193 yards of offense. He nearly scored on defense, returning an interception about 45 yards before getting tackled in the red zone.

Carson Bourdo scored a pair of rushing touchdowns as well, one on a 27-yard cutback play to put the Trojans up 14-0. He also grabbed an interception in the third quarter at midfield before getting taken down just short of the goal line.

Dante Williams, Josh Klug and Reed Seabase all scored on touchdown runs of their own. Williams blocked a field goal toward the end of a long first quarter. Central did pick up 14 penalties for 140 yards, one negating a Williams catch on a screen for a TD.

The Trojans tallied 468 yard of offense to the Lions’ 297, attempting just three passes all day. Part of that is credit to the Trojans strong front line of Kadyn Warner, Gavin Graczyk, Davis Hurley, Keegan Opper and Brett Weaver. They stopped the South Lyon rush attack led by Dakota Blackwell and Tommy Donovan.

“They played really well,” South Lyon coach Jeff Henson said of TCC. “They’re good at what they do. You could tell they were a senior-led team.”

Quinn Fracassi, South Lyon’s Division 1 junior wide receiver prospect who’s reported offers from Central Michigan and Youngstown State, wasn’t able to do much other than a 40-yard run out of the wildcat in the second quarter. He got hit hard on a block in the back call against the Trojans while fielding a punt and went down with another injury a quarter later.

“We were extremely beat up from last week,” Henson said. “We were getting held up by a lot of tape.”

Despite that, Fracassi finished with 82 yards receiving and 57 yards rushing. His brother, Braden Fracassi, took most of the snaps at quarterback and completed 13-of-31 passes for 131 yards for two scores. Donovan rushed for 62 yards on six carries and Blackwell only carried the ball once for five yards.

South Lyon’s previously undefeated season comes to an end at 12-1.

Remnants of Detroit’s holiday game hung around for the state championship games Friday and Saturday.

TRAVERSE CITY — The Trojans of Traverse City Central will get a proper sendoff ahead of Friday’s state championship football game.