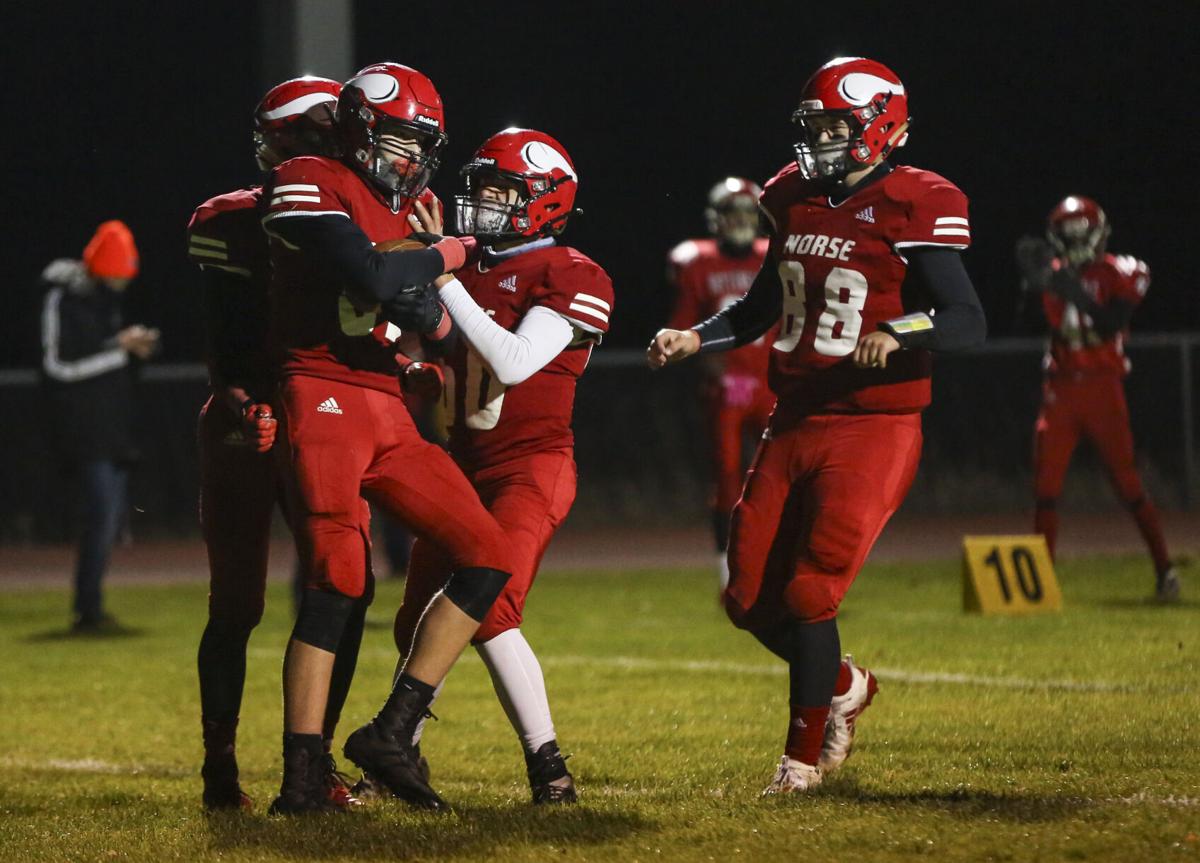 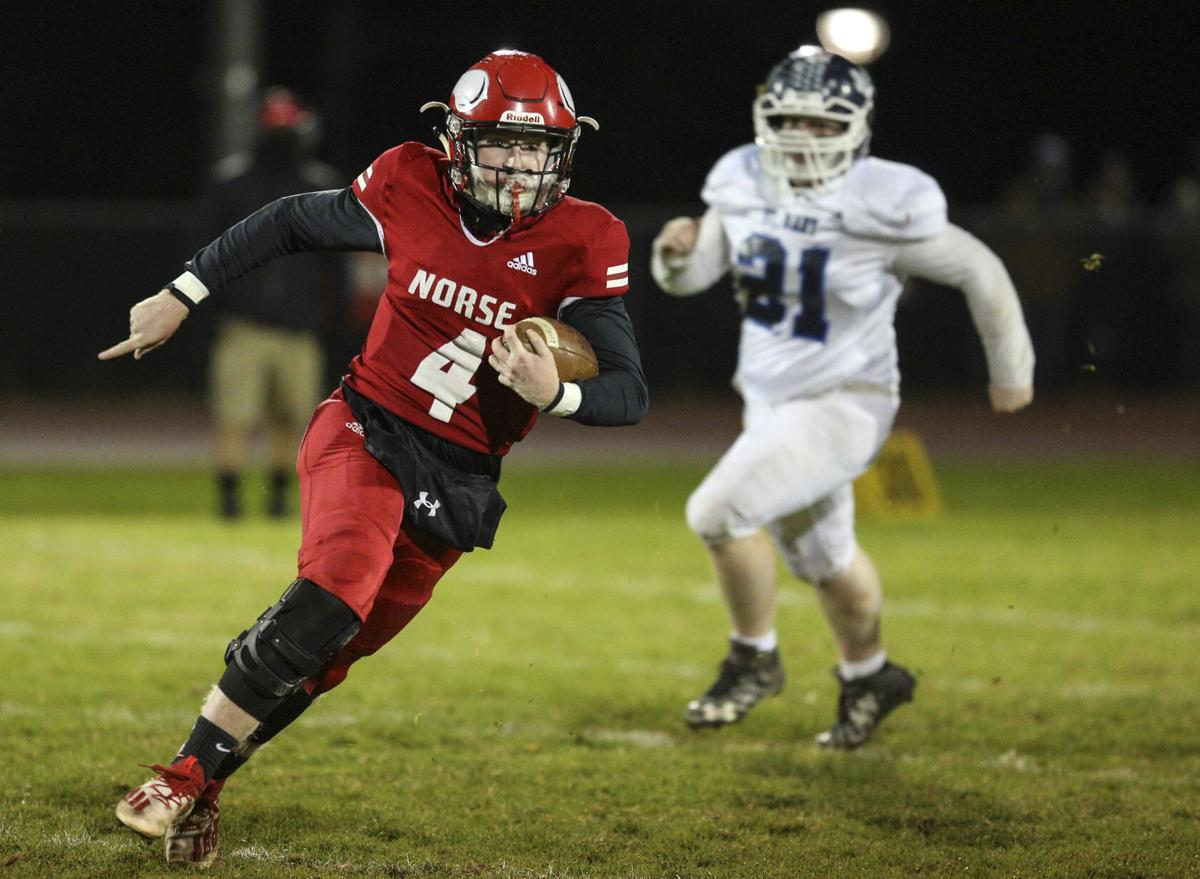 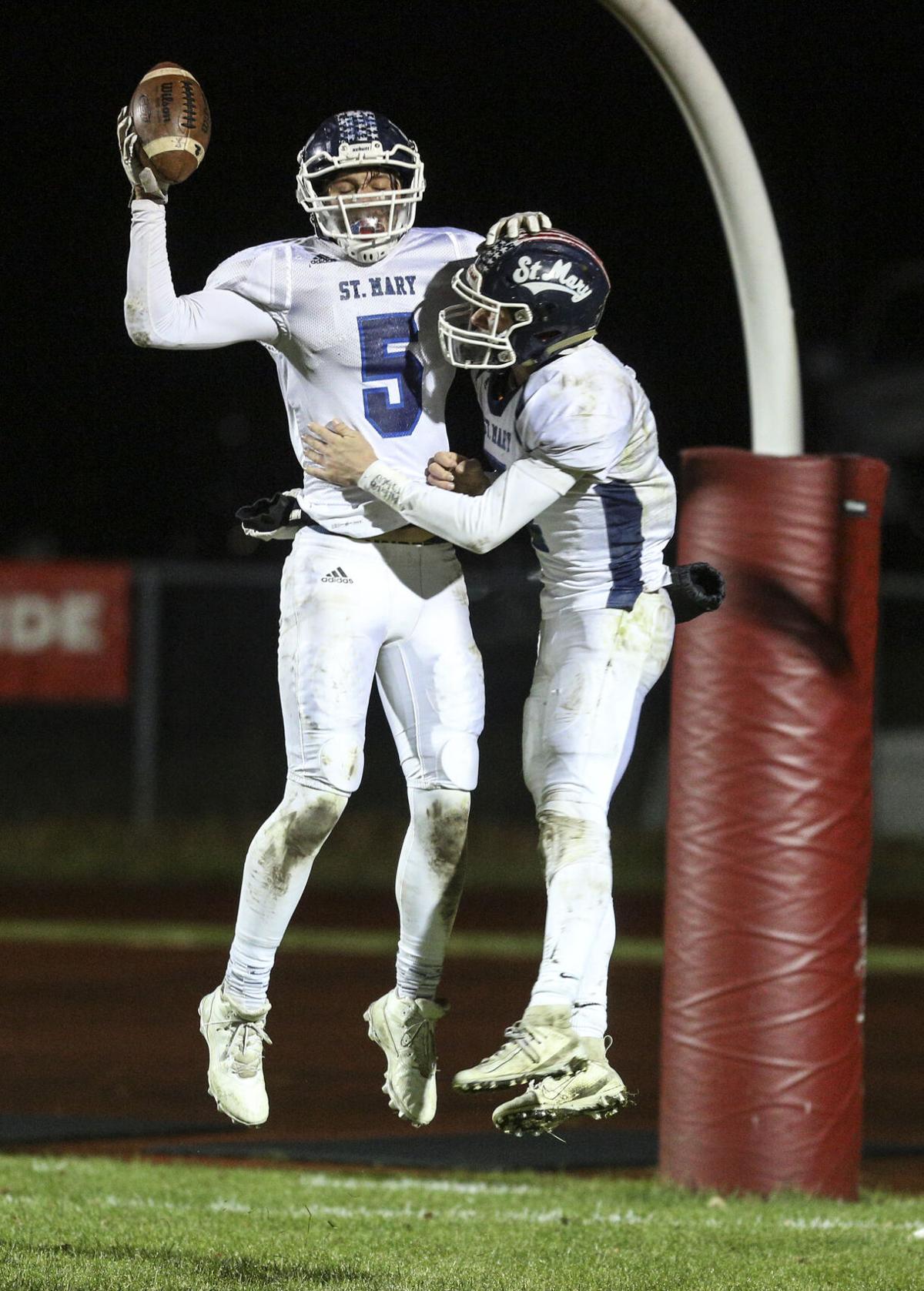 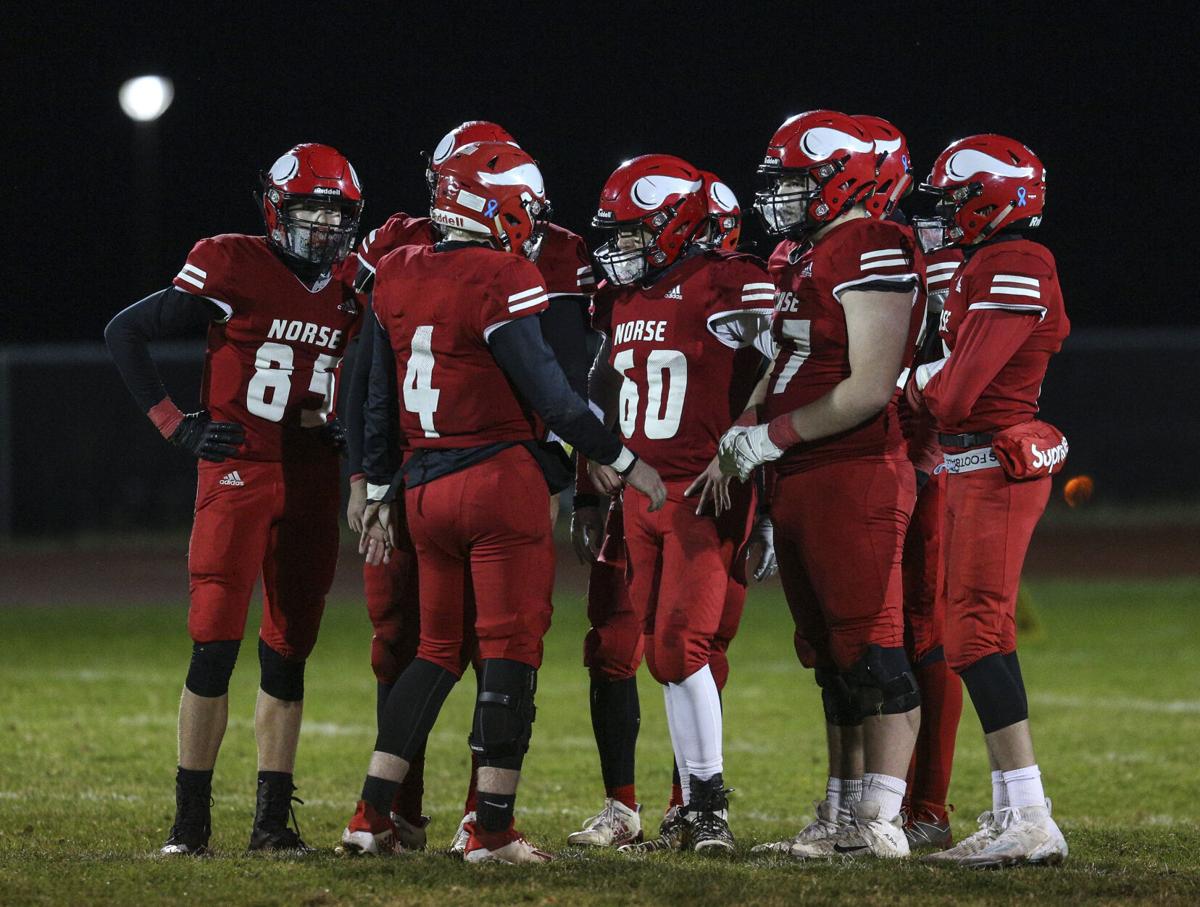 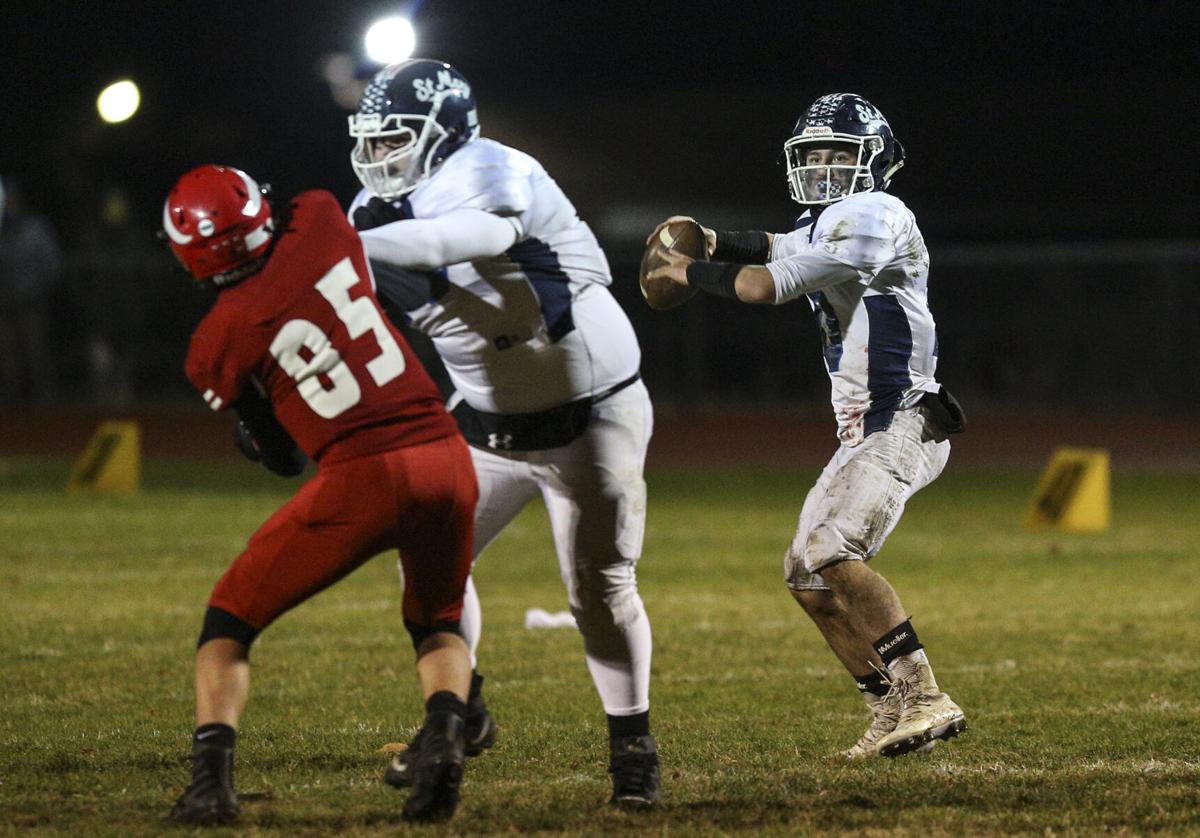 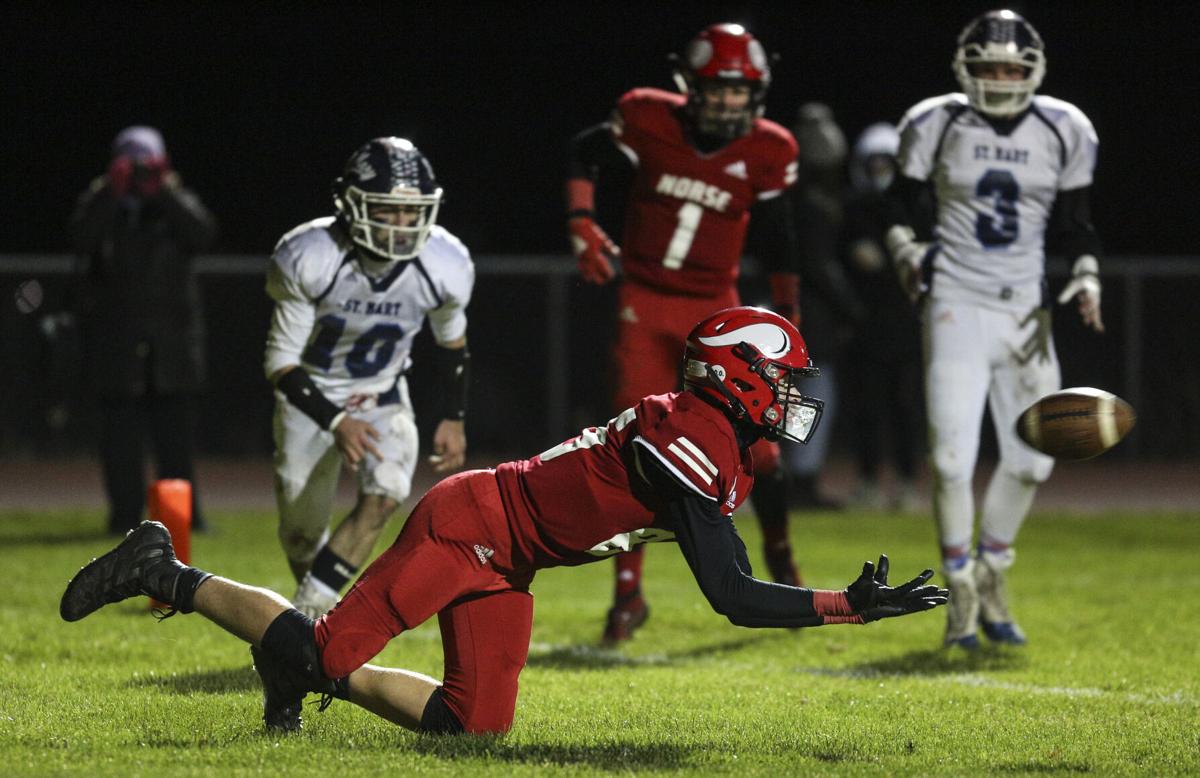 Suttons Bay’s Brayden Opie moves to complete a catch in the end zone at Suttons Bay High School in Suttons Bay on Friday. 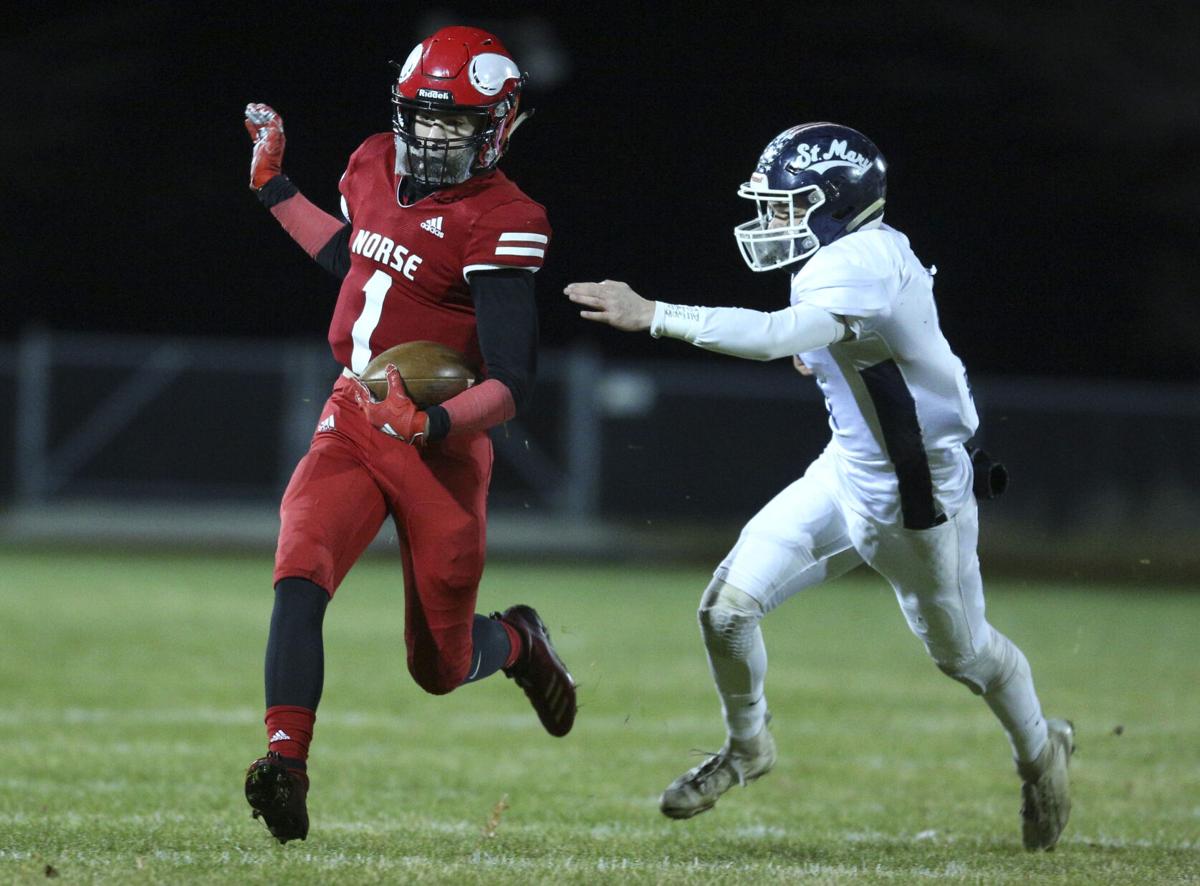 Suttons Bay’s Brayden Opie moves to complete a catch in the end zone at Suttons Bay High School in Suttons Bay on Friday.

There won’t be parties at teammates houses, the team huddles were team circles and there were masks in the team photo.

That’s because the Norse aren’t done yet following a 38-22 win over Gaylord St. Mary. There are two weeks that separate Suttons Bay and a trip to Midland for a state championship.

Coach Garrick Opie knows his team has a state championship in mind and doesn’t want to be the next team to forfeit a playoff game because of COVID-19 cases.

Two northern Michigan football teams were forced to forfeit district title games — Kingsley in Division 5 and Pickford in 8-man Division 1 — and Opie preached to the Norseman the importance of staying healthy to stay playing.

“It’s unthinkable,” Opie said. “You can’t even have that concept but I think in 2020 you just sit there and you’re like, ‘Could this be our last week?’ I don’t know.”

Suttons Bay held St. Mary to 22 points the entire game — the Snowbirds’ lowest total of the season — with a scoreless second half after being tied at as many points. It’s the Norsemen’s second postseason win over the Snowbirds in a pair of meetings the last two years, a playoff rivalry between two teams that are as close geographically as they are on the football field.

“It’s nice to have a healthy rivalry against two good teams,” Opie said. “Two teams that really have to play hard football and there’s no letting up on either side of the field.”

St. Mary was averaging less than a yard per play with one first down the entire first quarter.

The Norse sacked Snowbird quarterback Chris Koscielniak twice and stopped running back Conrad Korte for a loss. Koscielniak even tried a screen pass stopped for a loss of 2 yards desperate to find a hole to score.

Suttons Bay started to put points on the scoreboard in big plays, the first when it was facing third and long from its own 22-yard line. Hugh Parriard caught a pass from Nate Devol for a 77 yard touchdown to lead after one.

St. Mary’s Dom Keister returned a fumble for a 40-yard touchdown right after the start of the second quarter to tie the game at six, then after a long drive that included a 21-yard first down pickup by Devol on fourth-and-20 Suttons Bay was back in the endzone.

Devol found Brayden Opie and succeeded on the 2-point conversion on the same play.

St. Mary running back Conrad Korte fumbled and Suttons Bay’s Cameron Alberts recovered, setting up a two-play drive where Devol passed to a wide open Jake Murphy who raced down the right sideline and dove into the endzone for the chef’s kiss to take a 22-6 lead.

Chris Koscielniak and Korte got the Snowbirds offense moving for a 25-yard touchdown run and a 62-yard pass from Koscielniak to Korte to tie the game at 22 by the end of the half, but the glimmers of offense from a team that scored 86 points two weeks ago started to dull out from then on.

Shawn Bramer rushed from 30 yards out for the go-ahead score and conversion with 10 minutes to go in the third quarter, and the Snowbirds would never retake the lead.

Hugh Periard intercepted a pass from Koscielniak, then scored a rushing TD after sitting out a drive with an arm injury to retake a 16-point lead in the second quarter.

St. Mary had the last drive, but Devol came down with the decisive interception to win the game on a hail mary attempt.

“I’m just proud of seeing adversity, looking it right in the face, and fighting back,” Garrick Opie said.

Koscielniak threw three interceptions in the second half, finishing the game with 14 carries for 109 yards rushing and completing 3-11 passing for 77 yards. He added 19 tackles on the defensive end, four of which were tackles for loss.

St. Mary sacked Devol five times, with Chris Grody adding five tackles for loss and a pair of sacks. Dylan Acevedo had nine total tackles and three for a loss, Keister added five tackles along with a first half interception and touchdown fumble recovery.

The Snowbirds held the Norse to negative yardage in the fourth quarter, but the bulk came on a play where Devol intentionally wheeled out twice for a 10-yard loss to burn clock and avoid scoring to give the ball back to the Snowbirds.

“I thought we were in a heck of a game,” St. Mary coach Kevin O’Connell said. “I thought we thought we had them tired. Starting the second half we just failed to convert on third down and we got backed up so we’re forced to throw the ball in certain situations.

Bramer led the Norsemen in rushing with 131 yards on 21 attempts. Devol threw for 164 yards on 9-15 passing, Perriard caught three passes for 103 yards.

Michael Wittman led Suttons Bay on defense with 11 tackles, one for a loss. Perriard had nine tackles and Matt Kohler eight tackles with two for a loss.

“I thought we played really great,” Wittman said. “We prepared really hard all week for them with countless hours of film ... I thought we came out really aggressive, popped them on the mouth and held strong.”

Suttons Bay will host Inland Lakes after Pickford, the team that ended the Norse’s season in 2018, forfeited Friday’s game with Inland Lakes because of positive COVID-19 cases.