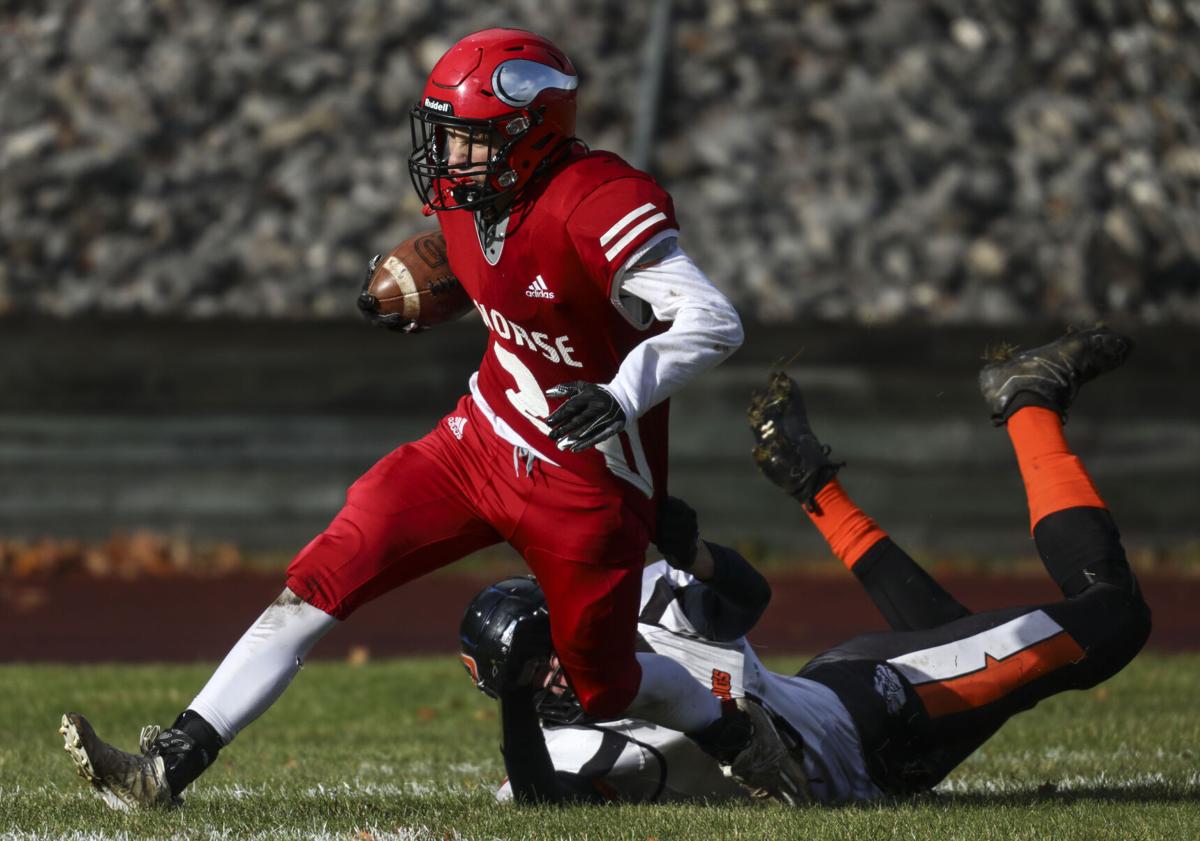 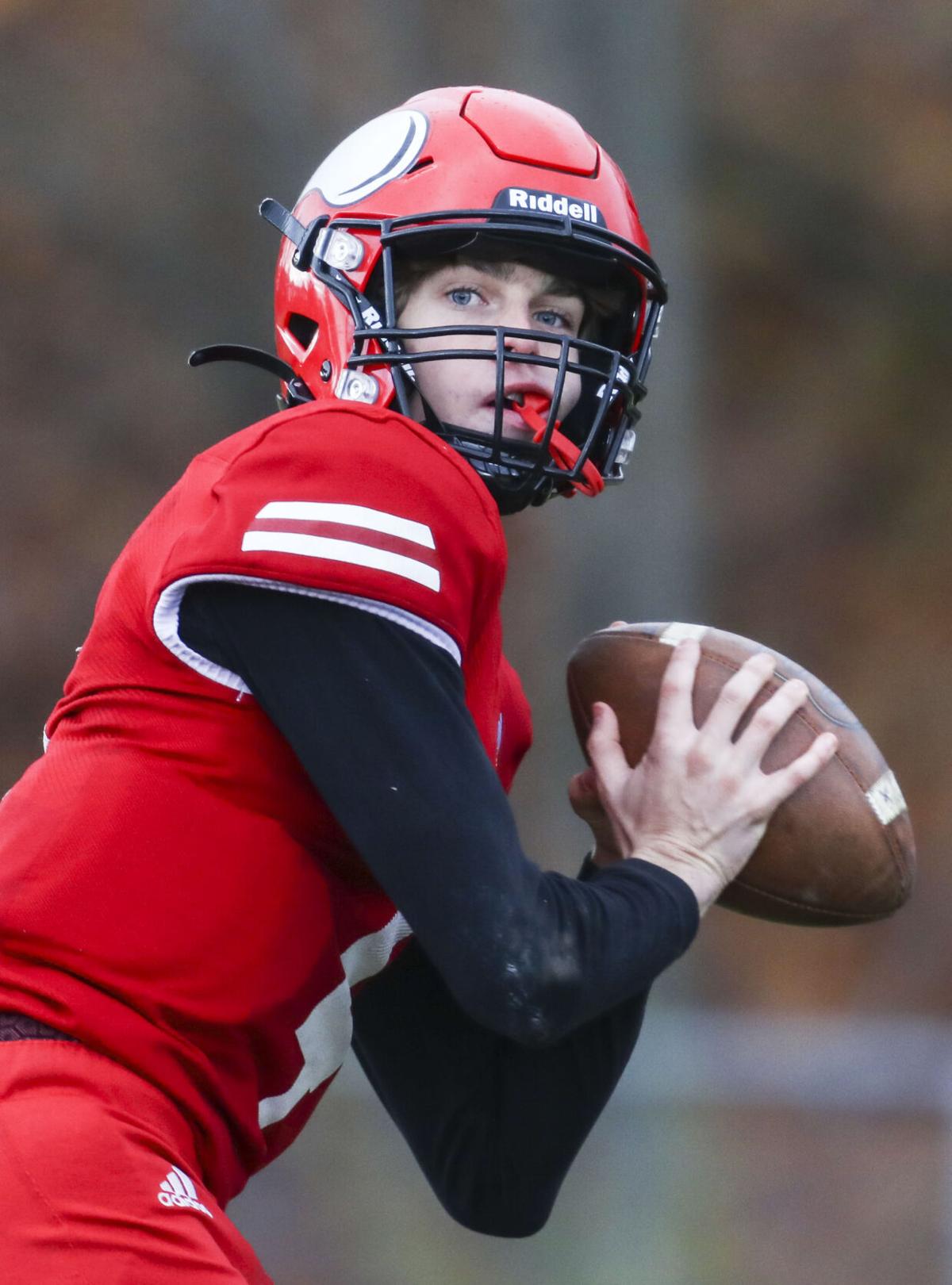 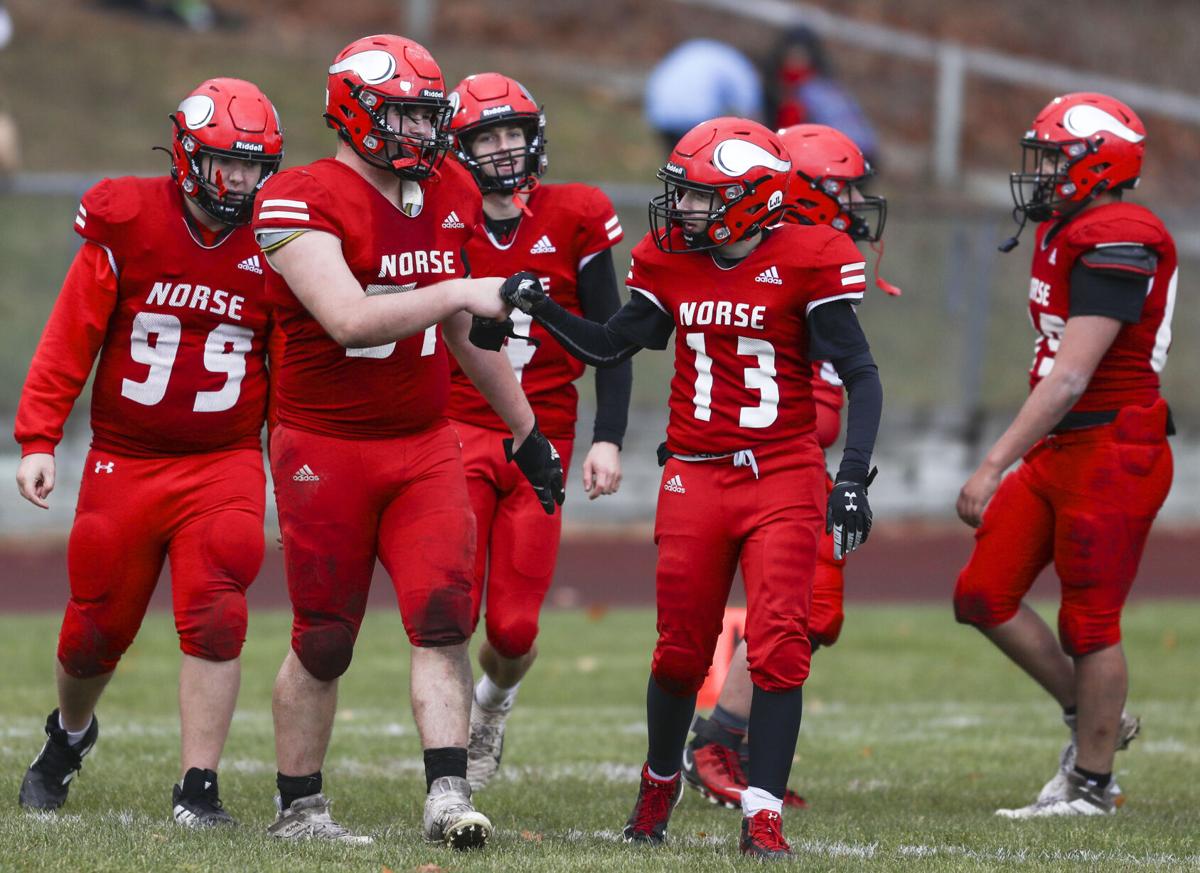 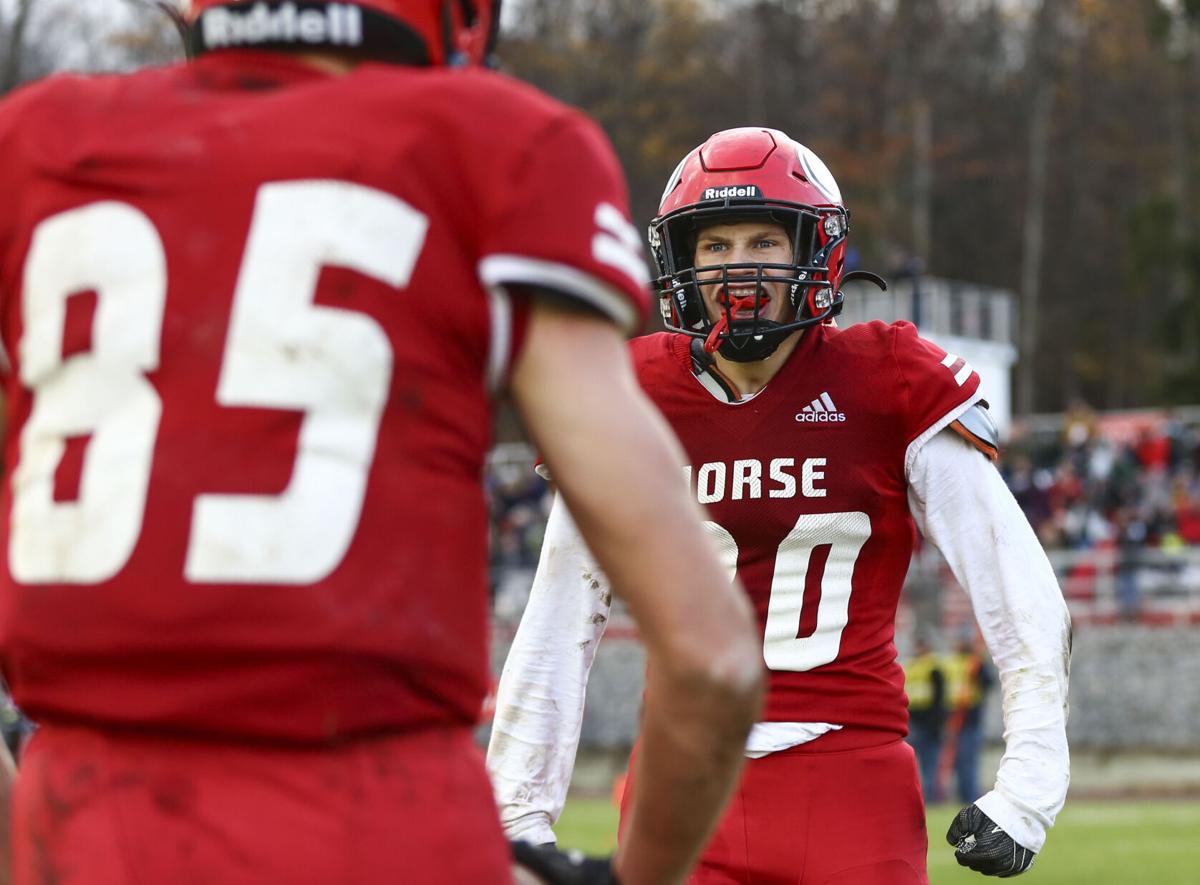 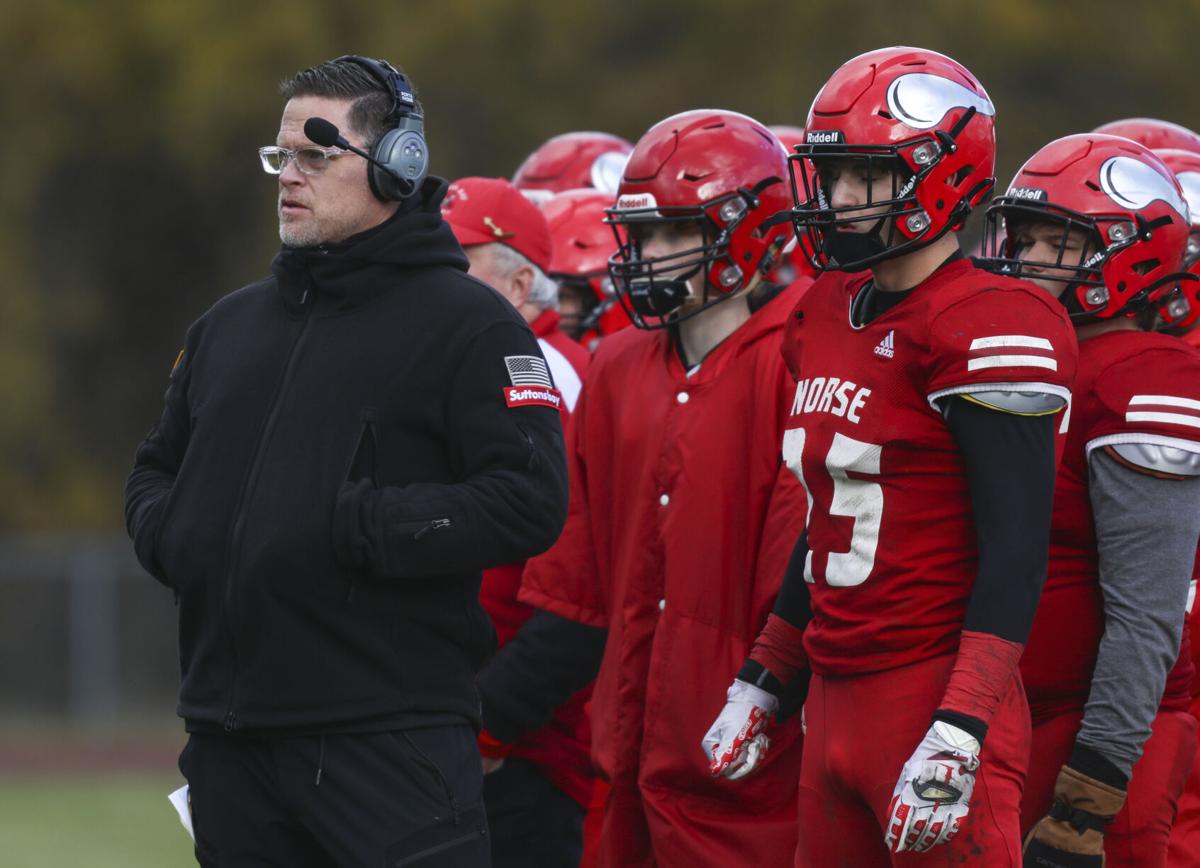 The months-long effort will either end in jubilation and an eight-player football state championship or heartbreak and a loss in the title game for a third straight year. The Norsemen (12-0) play fellow undefeated Adrian Lenawee Christian (12-0) at 11 a.m. Saturday at Northern Michigan University’s Superior Dome.

Whatever way things shake loose — win or lose, heartbreak or jubilation — the Norsemen will still be a success story because of what that team has meant to the two small towns and even smaller schools they represent.

Suttons Bay and Lake Leelanau St. Mary joined football forces in the late 1980s when current Suttons Bay assistant coach and defensive coordinator Stan Pasch was on the St. Mary Board of Education. The co-op has had its ups and downs, but the program has certainly been on the rise since its switch to eight-man in 2017.

The Norsemen have 50 wins since 2017 and have become a perennial powerhouse and state title contender the last three seasons.

“We’ve had some great people and some great community support here throughout the years,” Pasch said. “You can’t ask for a better situation.”

Pasch, who has coached football for 47 years, has a long history with Suttons Bay and Lake Leelanau. Although he has coached several other sports, including volleyball, track and swimming, football is his love and passion.

“Where else would you want to be on a Friday night?” Pasch said. “Football really grows young men more than anything else. It takes a lot of commitment to each other.”

His first stint with Suttons Bay was from 1980-84 before he left for Traverse City St. Francis, where he won a state championship in 1992. Mark Bramer played on that ‘92 Gladiator team and just so happens to be the father of current Suttons Bay junior Shawn Bramer, who scored the game-tying touchdown in Saturday’s 42-36 overtime win against Rudyard in the state semifinal.

Pasch returned to the Suttons Bay coaching staff in 2000 and has been there since. He also taught at Suttons Bay Public Schools for 44 years but has spent the last two school years as the health and physical education teacher at St. Mary.

“I’ve been very, very fortunate to be able to do this with so many good families and so many good kids,” Pasch said.

Pasch said the student-athletes who come out to play from two different schools continue to impress him with how well they come together as one.

“The kids here, they never mention where they’re from. They’re just like brothers,” he said.

But that’s as far as the split goes.

“It’s really just one team. We don’t think about two schools. We want to be united out there and play as one,” Suttons Bay junior Corbin Alberts said.

“We can’t get sick of each other because we’re not seeing each other every single day for seven hours during school,” Barnowski said. “We get to see each other for two hours a day and play a game we love together. That helps us a lot. We all love each other.”

Barnowski said they are already talking about how much they’re going to miss each other after Saturday.

“We’re sad this is our last week. These guys are some of the best friends I’ve ever had. It’s a brotherhood,” he said.

Fortunately, they’ll see each other in another sports arena not long after the title game. Suttons Bay and Lake Leelanau St. Mary open the varsity boys basketball season against each other on Dec. 7 at Suttons Bay High School. Many football players, including Barnowski, also play basketball for their respective schools.

“It’s just all fun and games,” Barnowski said. “We know we’re just going to be excited to see each other again and play on the court together, even if it is against each other.”

Suttons Bay football head coach Garrick Opie said he doesn’t even keep track of which player goes to which school.

“I love them as a team,” Opie said. “We’re a team and a single unit. I never try to separate them.”

And the players don’t separate each other either.

“They’re all goofballs and mess around with each other,” Opie said. “They’re really cohesive and together. You can’t even tell there are two different schools out there. They don’t see it that way.”

Saturday could be the day when these two schools come together to win one championship, which would be a first for the program.

“These are both little schools. We don’t win state championships that often,” Barnowski said. “It will be huge for us and for our communities.”

The Get Around Episode 196 Podcast Teaser

BACKGROUND: Who doesn't love a rematch? The Norsemen and Cougars squared off in the 2020 8-player state championship back on Jan. 16. Adrian Lenawee Christian ran away with the title in a 47-0 rout of Suttons Bay, but the Norse are hopeful for a different outcome this time around. Saturday marks the third straight appearance in the state championship game for Suttons Bay. The previous two did not turn out in the Norsemen's favor after they also fell to Colon 26-14 in 2019. Suttons Bay will have its hands full with the Cougars, who come in on a 23-game win stream and have lost just four times since the beginning of the 2018 season and compiled 41 wins in that span. Adrian Lenawee Christian is averaging 50.7 points per game and allowed just 93 points all season. The Cougars have held their opponents to 14 points or fewer 10 times, including five shutouts. The most points they allowed was 21 to Colon in a 47-21 win in Week Five. But Suttons Bay is no slouch either. The Norsemen had not allowed more than 18 points to any opponent until the state semifinal against Rudyard, in which they gave up double that about in the 42-36 overtime victory. Suttons Bay has a solid and balanced offensive attack led by quarterback Dylan Barnowski's strong and accurate arm that lends itself to the big play and the deep pass. Just like their opponent, the Norsemen also only have four losses since 2018, but they have two more wins at 43. They'd certainly like to make it 44 by the time Saturday's game is over.