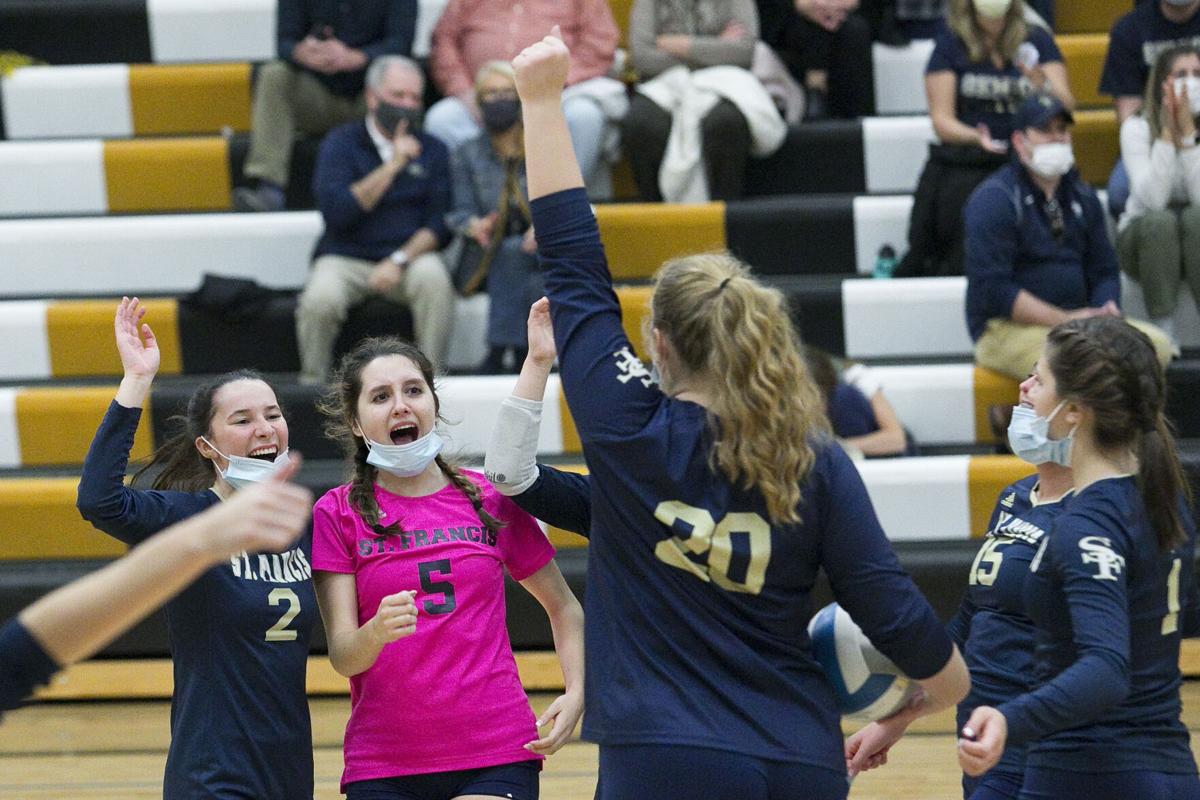 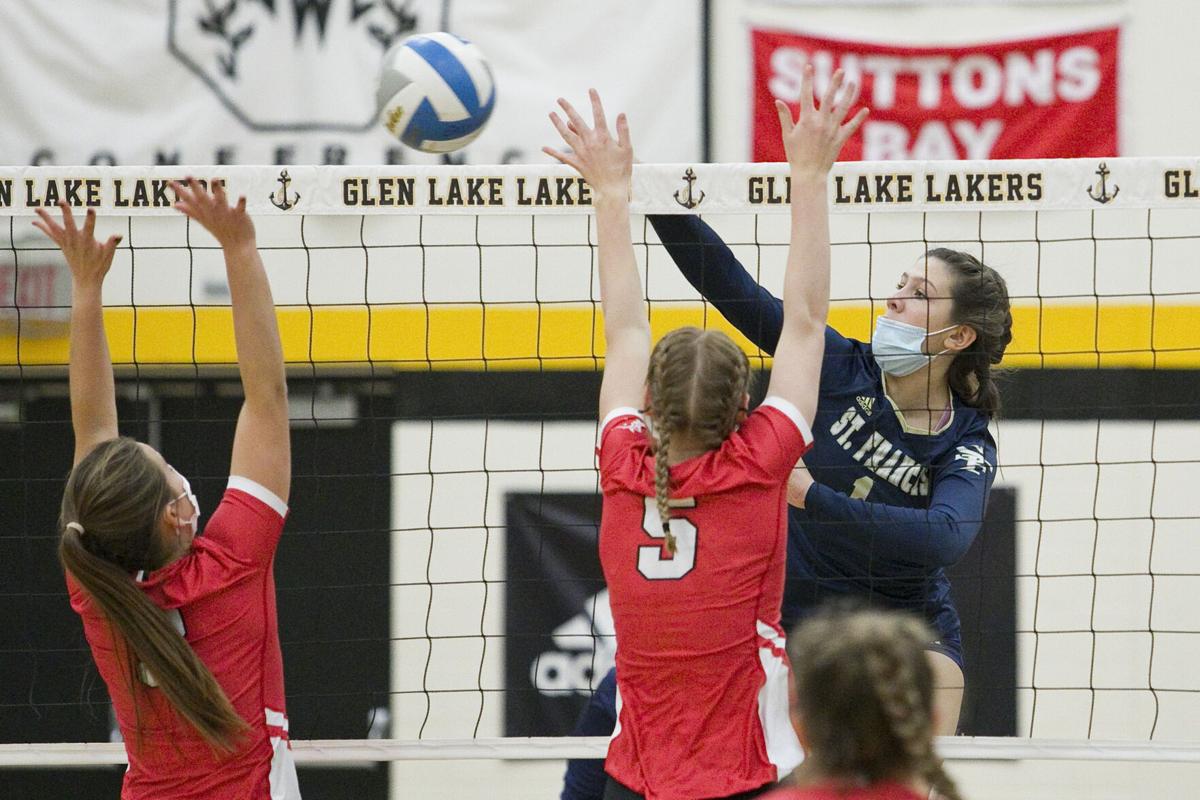 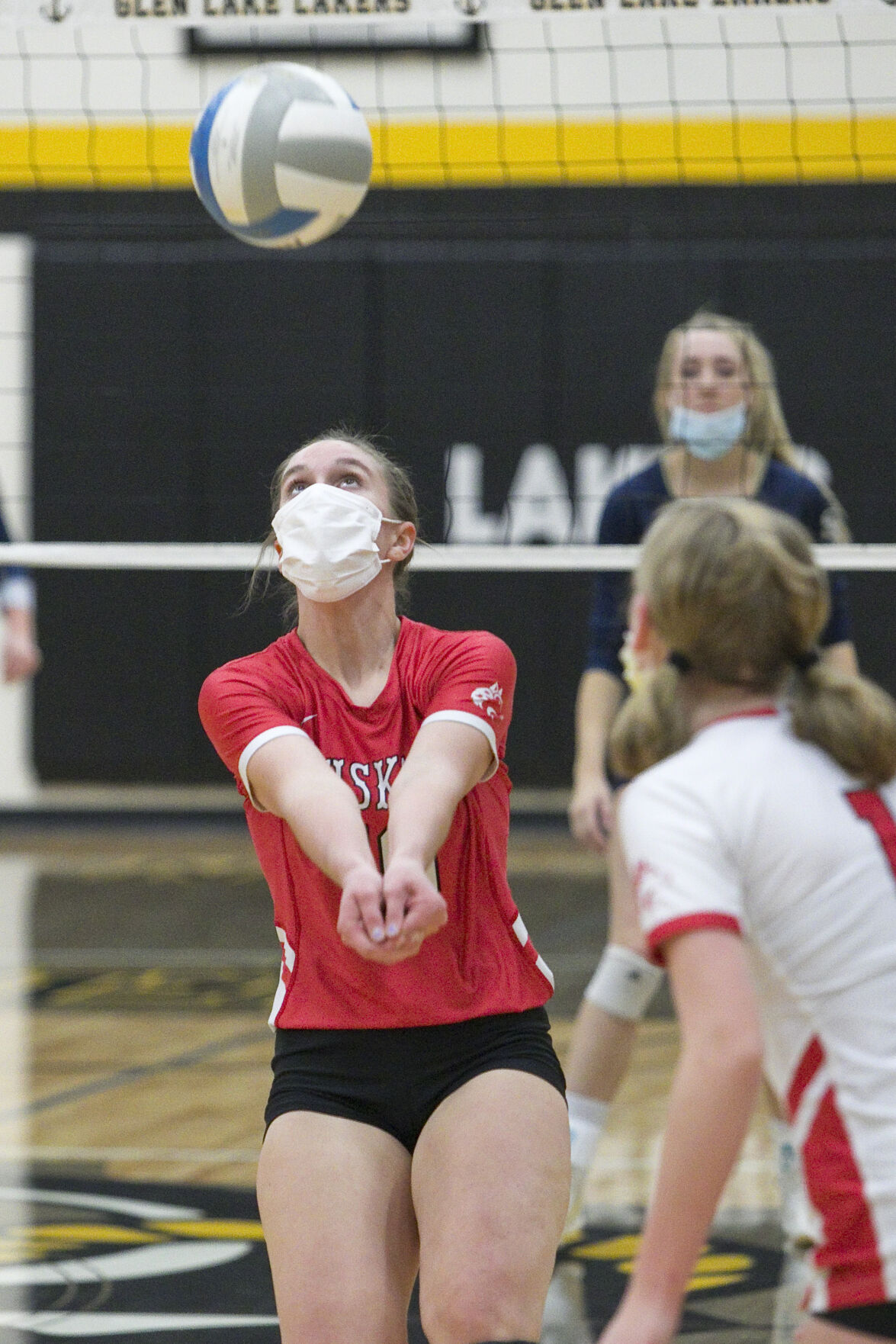 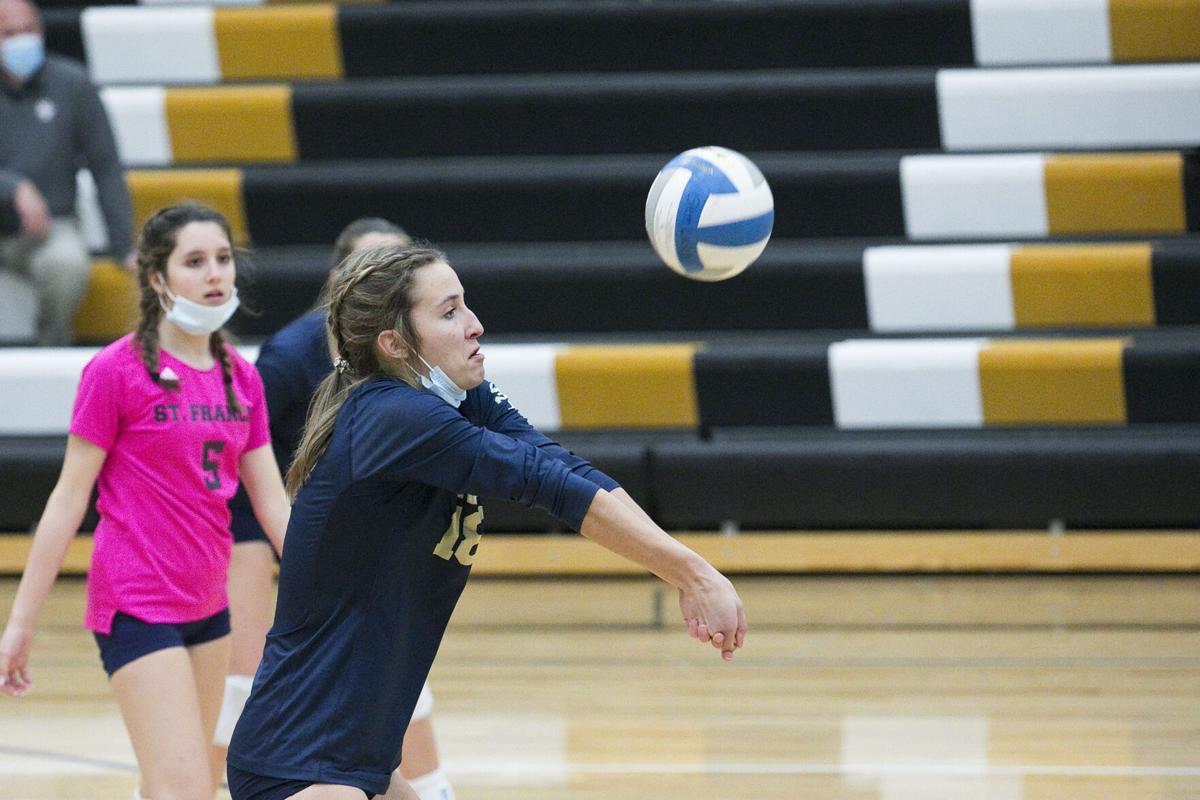 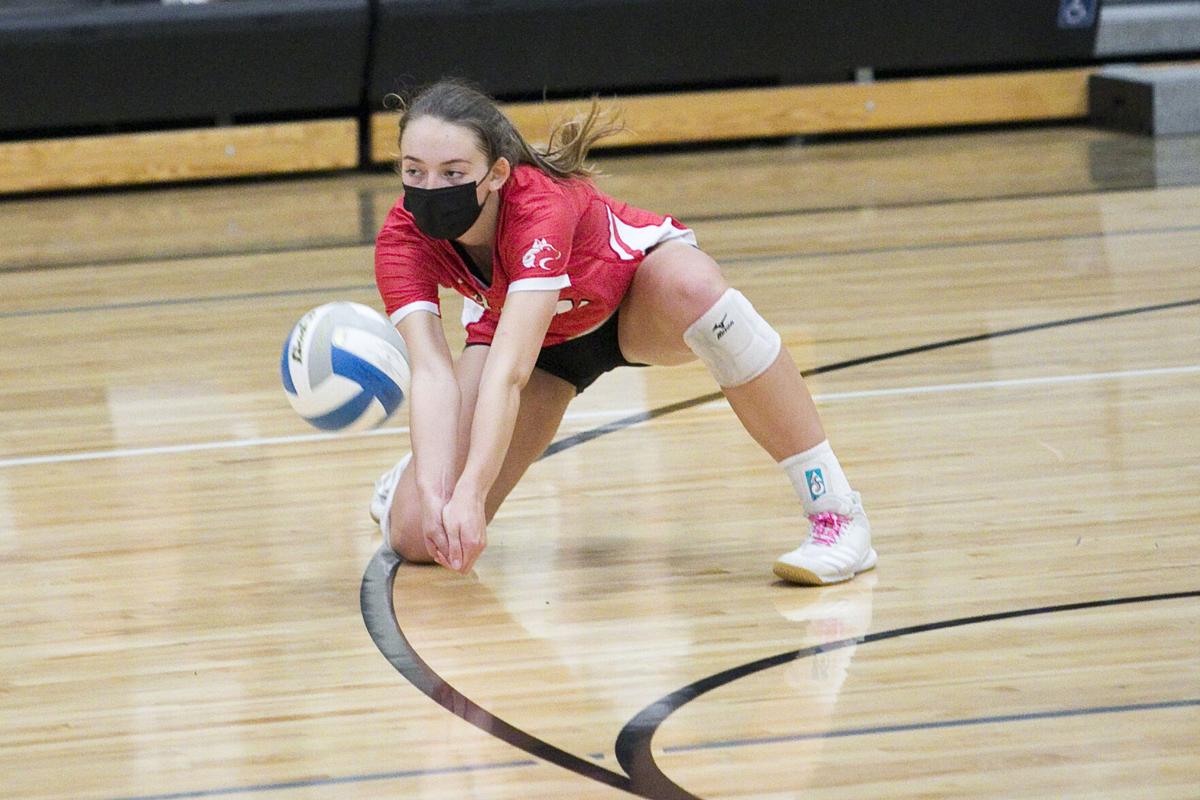 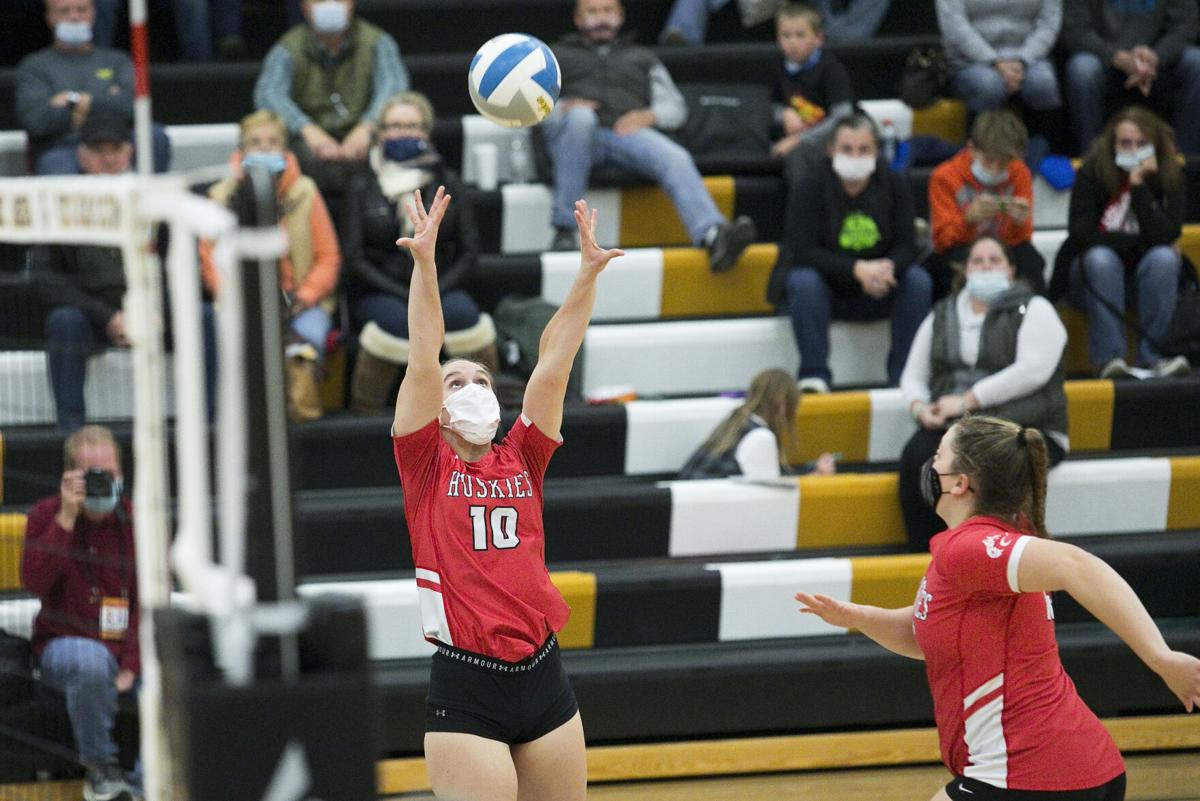 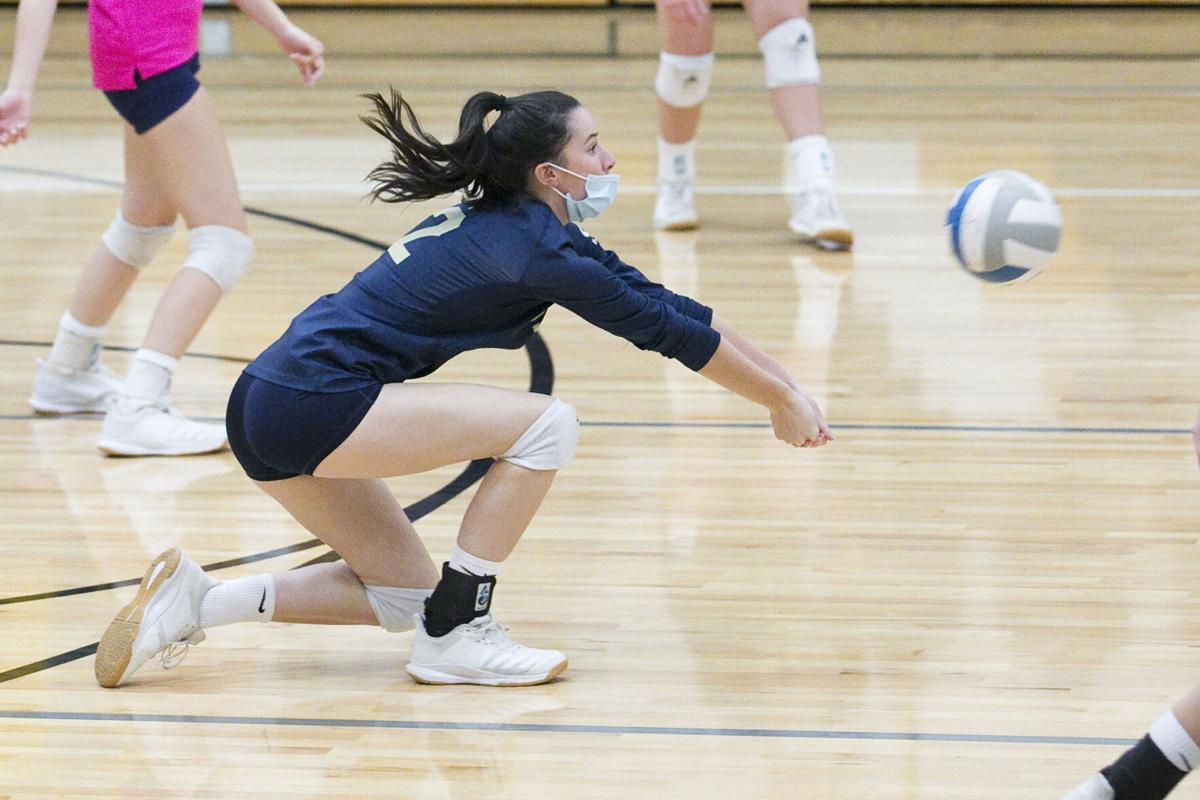 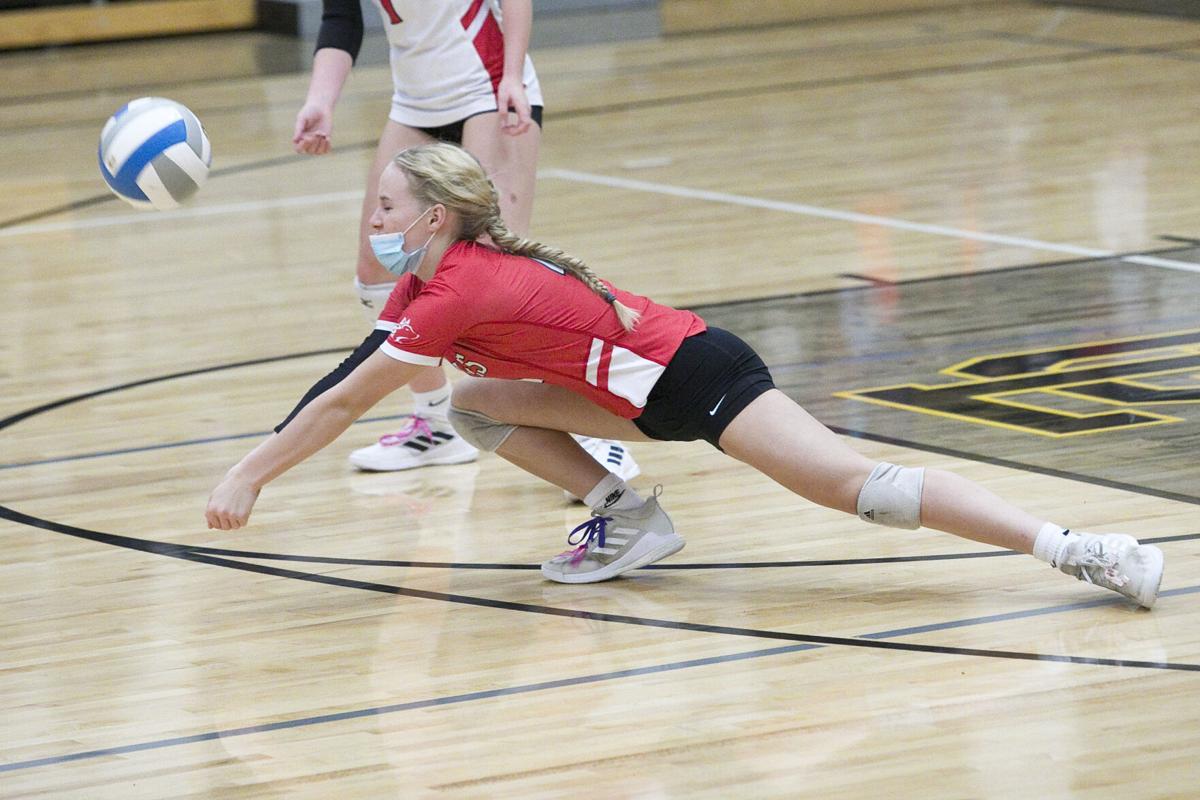 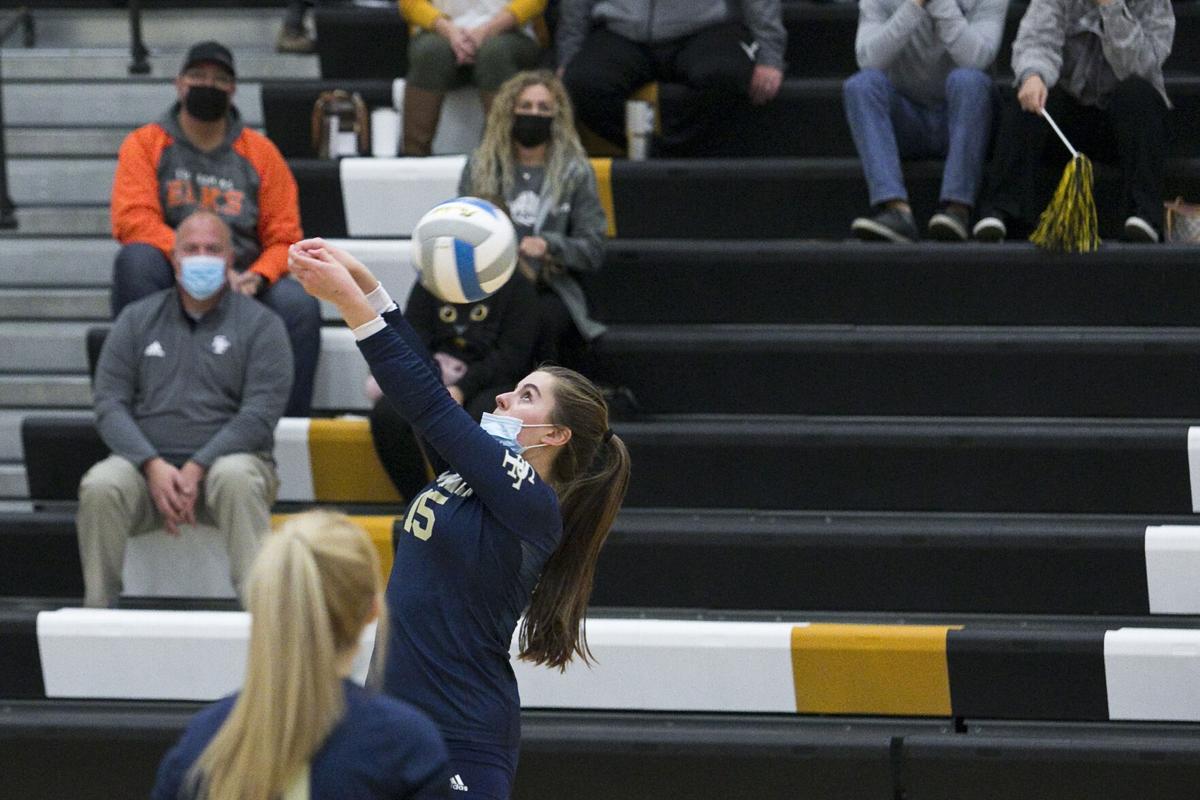 Traverse City St. Francis' Garnet Mullet (15) passes the ball over her head in the third game of Tuesday's district match against Benzie Central at Glen Lake. 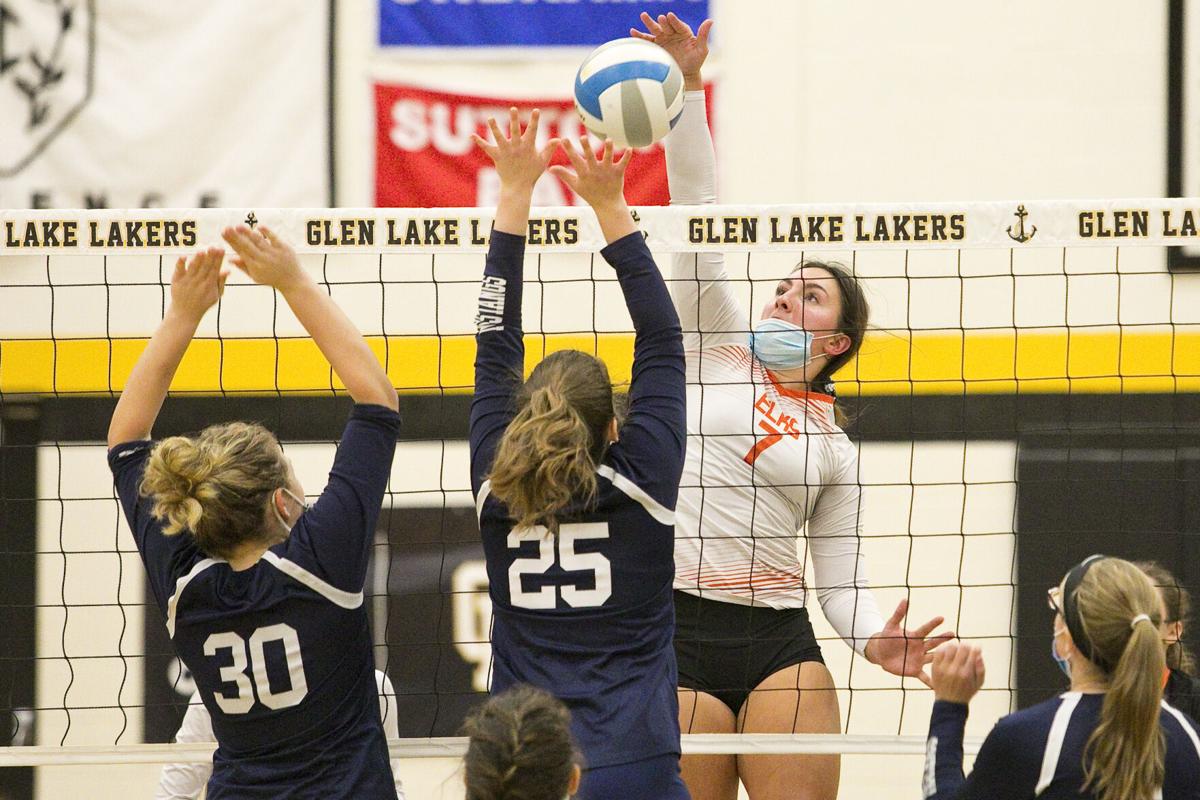 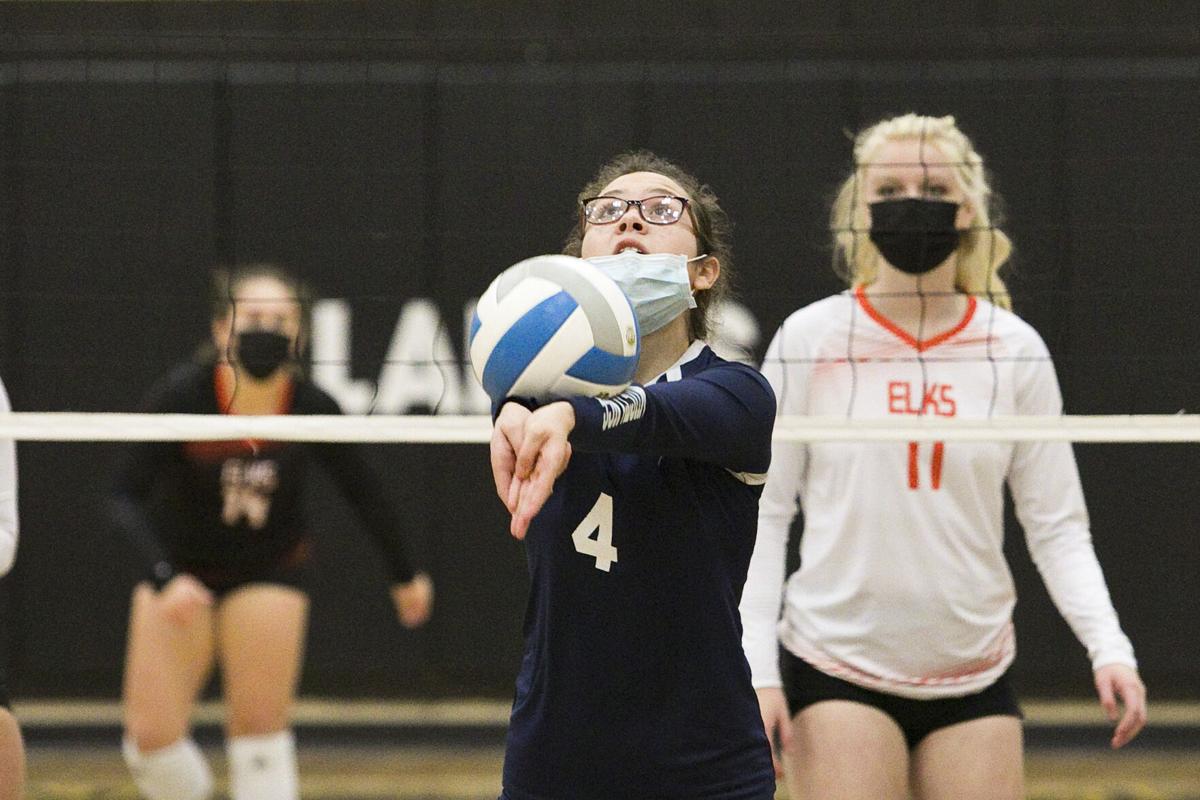 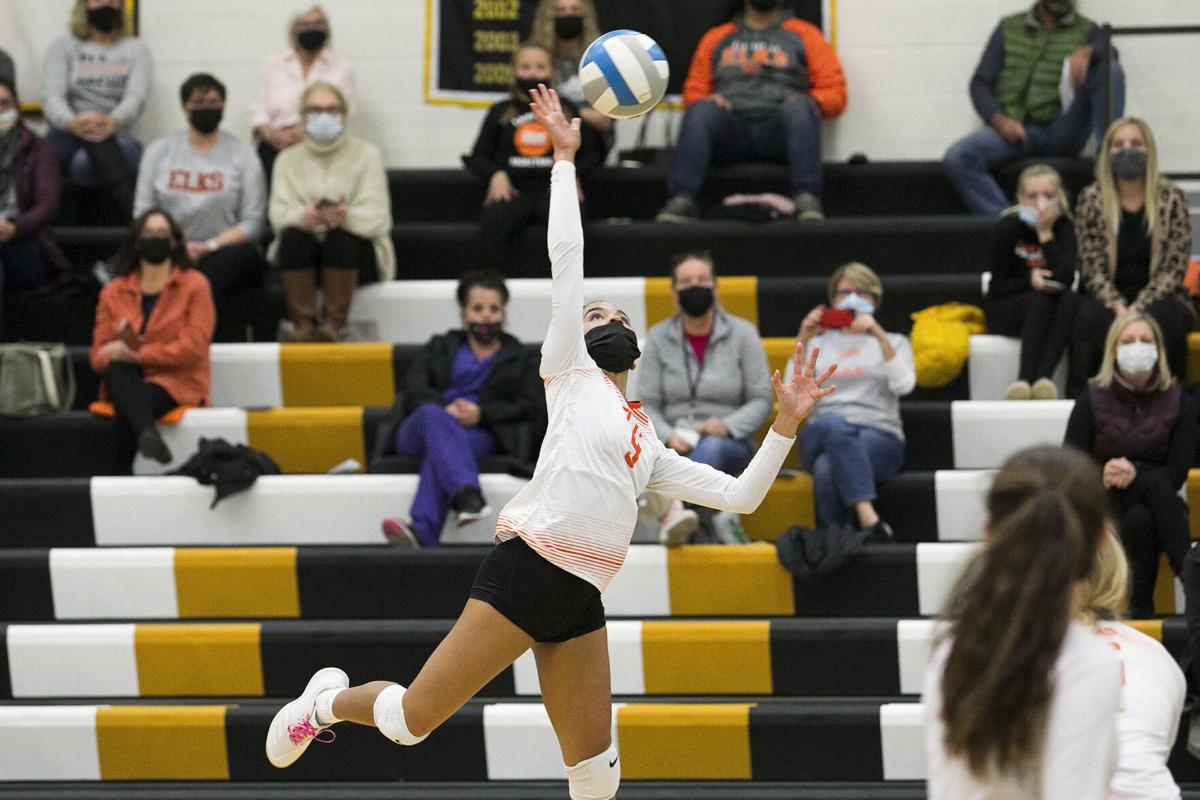 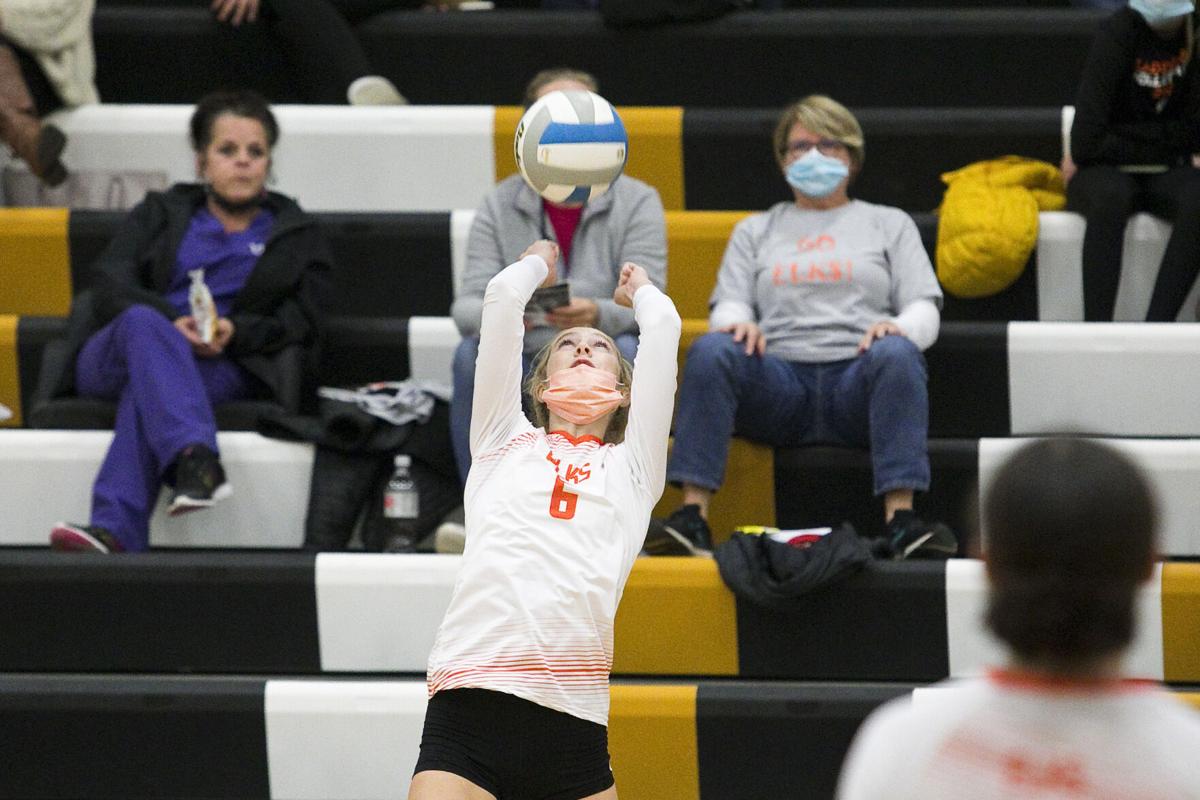 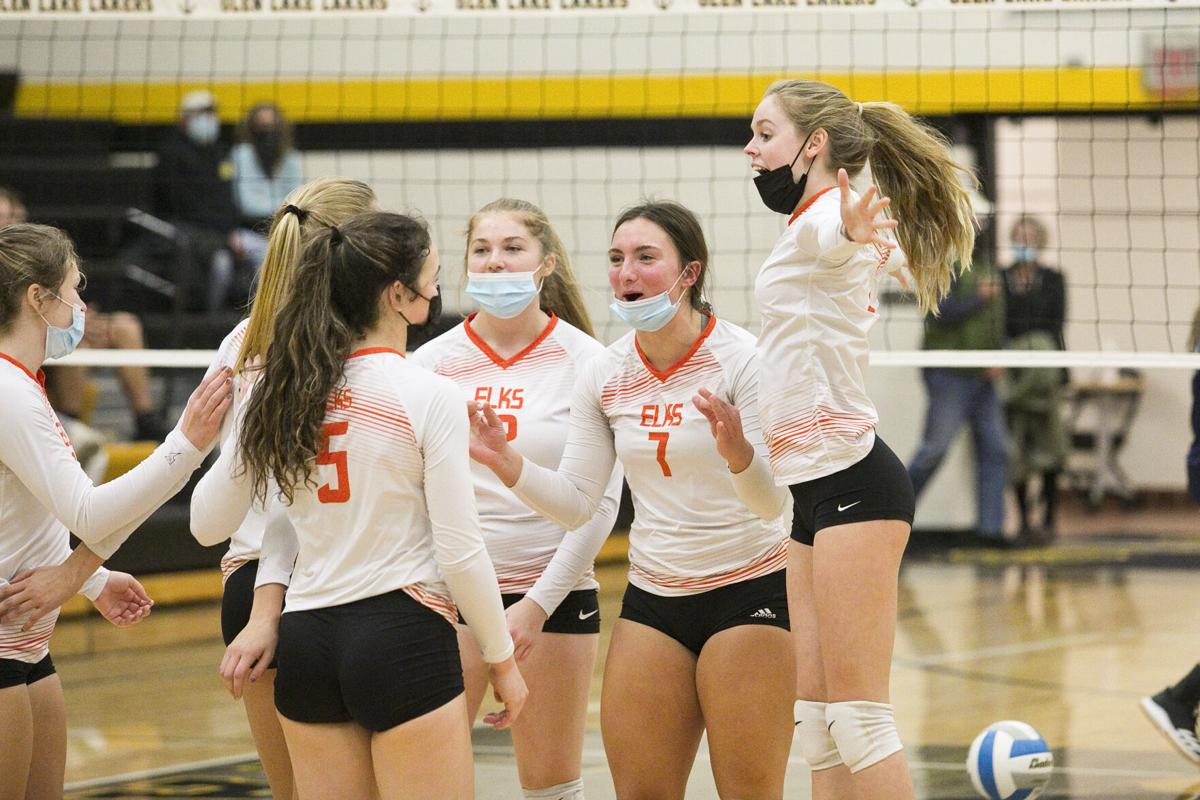 Traverse City St. Francis' Garnet Mullet (15) passes the ball over her head in the third game of Tuesday's district match against Benzie Central at Glen Lake.

MAPLE CITY — A Benzie Central assistant coach decorated the team’s bench with red ribbon and hung bunting over the gym’s entrance ahead of Tuesday’s neutral-site match.

“She wanted to make it special even though we’re not home,’ Benzie varsity volleyball head coach Madison Lutzke said.

In a way, the district tournament bout was special. Tuesday was Benzie’s first year competing in a playoff match in Division 3 after many years as a Division 2 school and being placed in a district bracket with Cadillac. The Vikings have won 15 straight district titles.

The result wasn’t much different, however, as Traverse City St. Francis knocked out Benzie Central in a 3-0 sweep (25-10, 25-19, 25-15) to open district play at Glen Lake. The Gladiators will meet Mancelona in the semifinals Thursday.

“We want to be super focused because we know once we lose, that’s it,” TCSF senior Maggie Jarema said. “We want to keep winning. I’d like to see us do well for the season.”

The Gladiators allowed several ties in set two but did not trail. Benzie took an early lead by a point in the third set, but St. Francis finished on a 10-4 run highlighted by a diving out-of-bounds dig from freshman Avery Nance.

St. Francis coach Kathleen Nance praised the play of both her middle blockers, Maggie Jarema and Gwen Bramer, for holding their own at the net.

“We came out really strong,” Kathleen Nance said. “Set one, we played pretty error free; then we kind of let off the gas a little bit in set two, but then we came out on fire in set three.”

Benzie was led in kills by sophomore Ava Bechler with seven. Sophomore Kara Johnson scored a team-second in kills with three and led in digs with 12. Junior setter Autumn Wallington had 11 assists. Sophomore Sky Hawkins also had 11 digs.

The Huskies (3-24-3) didn’t have a senior on their roster this fall. Each of six juniors and five sophomores return next year with solid season and playoff experience.

“There’s a maturity that I think we’re still missing a little bit,” Lutzke said. “This is a great learning lesson, and it’s gonna make them even hungrier for next year.”

Gametime for the game with Mancelona is set for 5 p.m. back at Glen Lake.

BRACKET BITS: Elk Rapids swept Grand Traverse Academy 3-0 (25-4, 25-18, 25-6) in the late game Tuesday. The Elks will meet Glen Lake in the second round at 6:30 Thursday following the St. Francis/Mancelona game. The winners of both games will play in Saturday’s district final at noon. ... The winner of Glan Lake’s district will play the winner of East Jordan’s district in a regional at Charlevoix, next Tuesday.

MAPLE CITY — The Elks of Elk Rapids continue their fine play on the volleyball court.