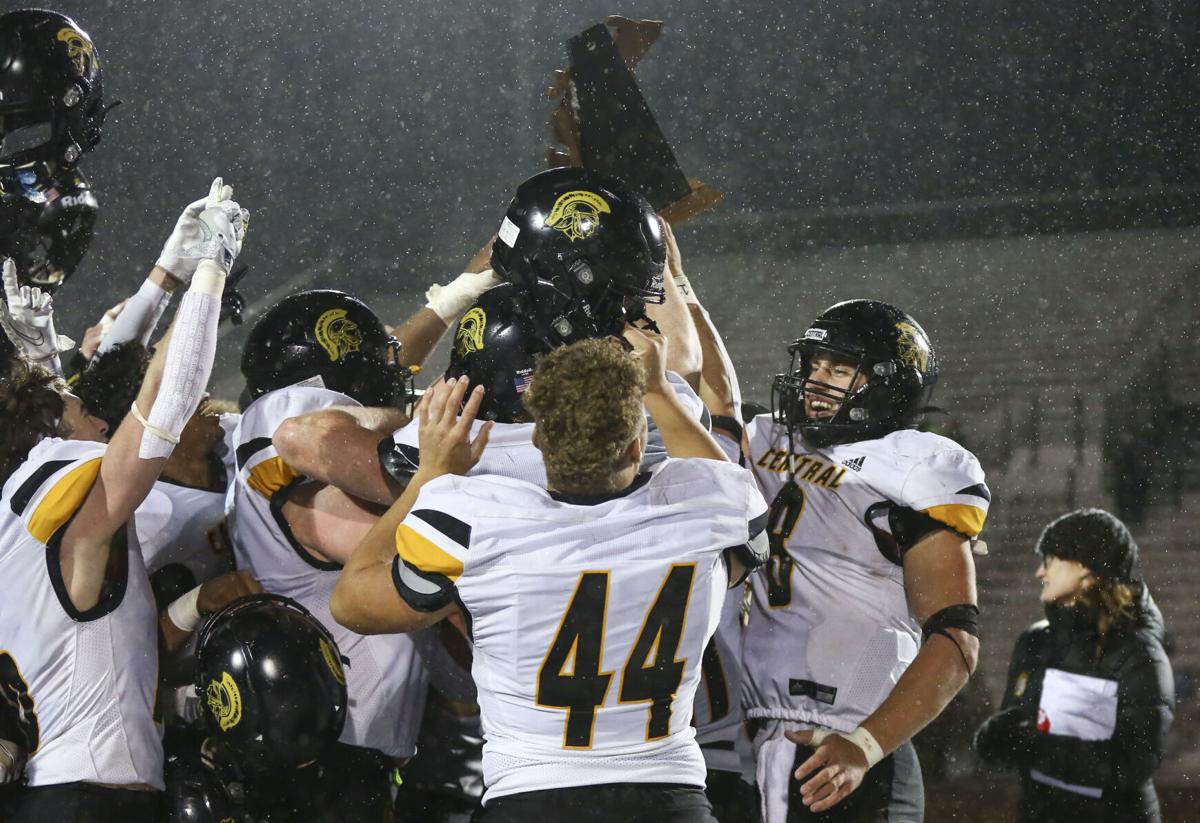 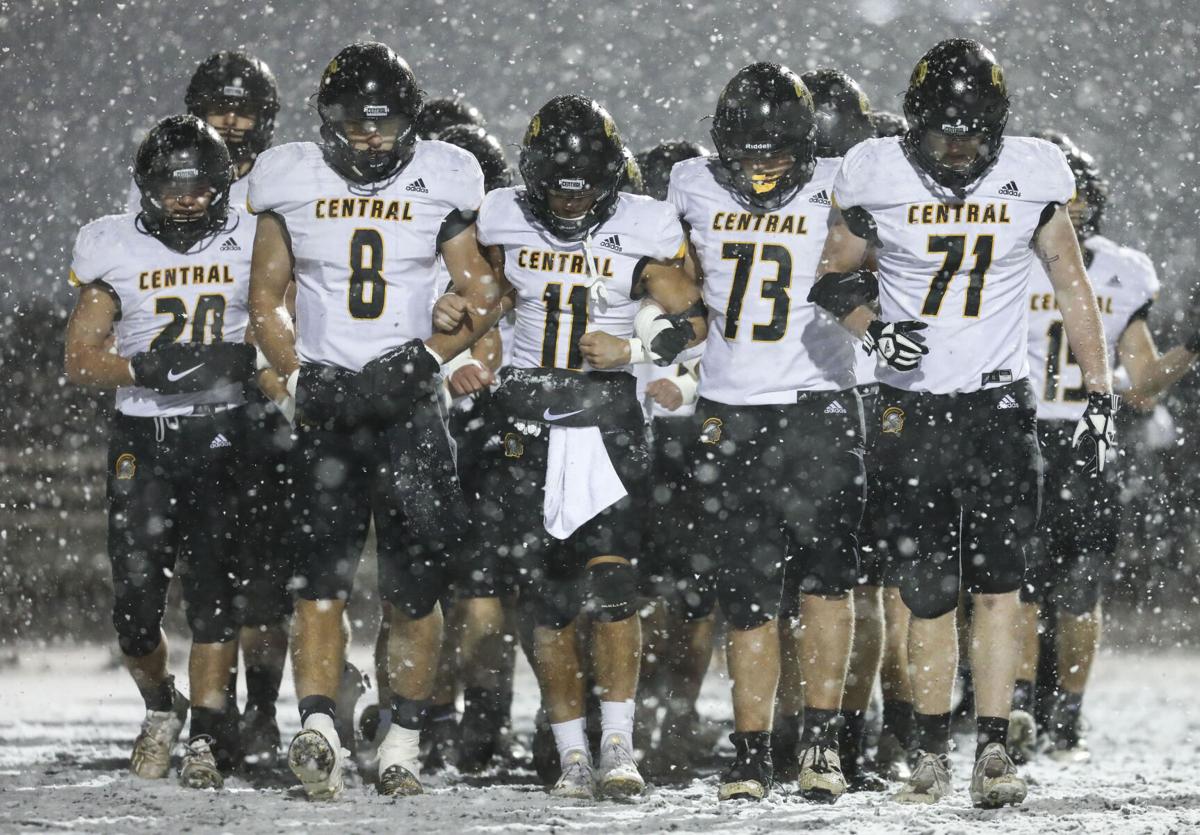 The Traverse City Central Trojans take the field for the MHSAA Division 2 Regional Championship at Grandville High School in Grandville on Friday. 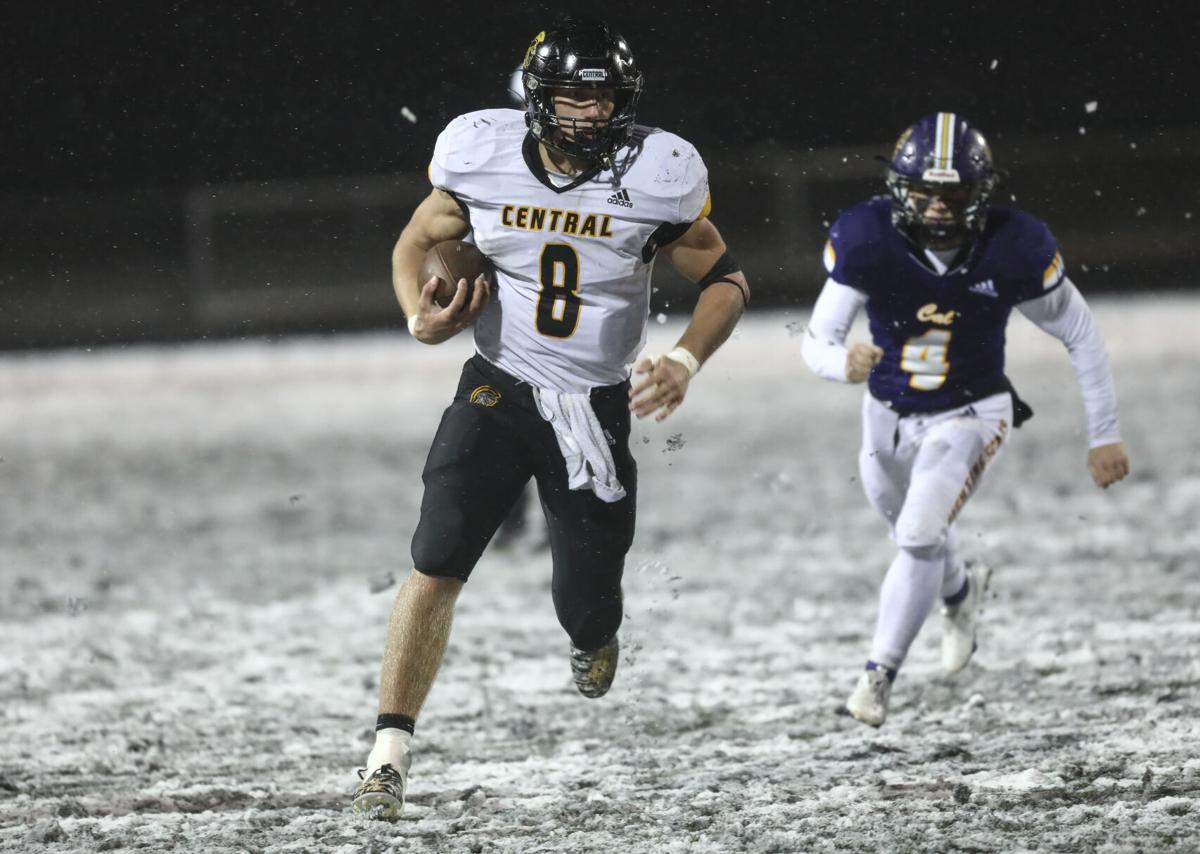 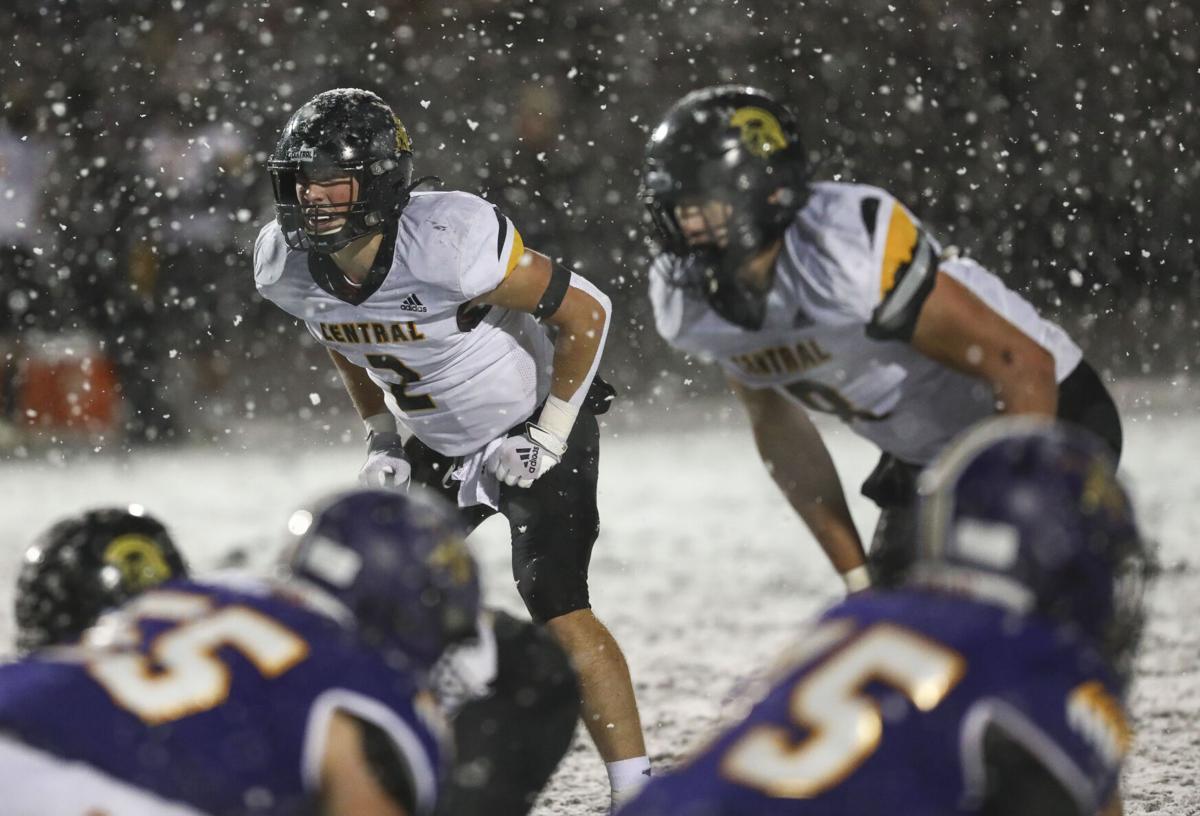 Traverse City Central’s Josh Klug and Josh Burnham wait for a snap during the MHSAA Division 2 Regional Championship at Grandville High School in Grandville on Friday. 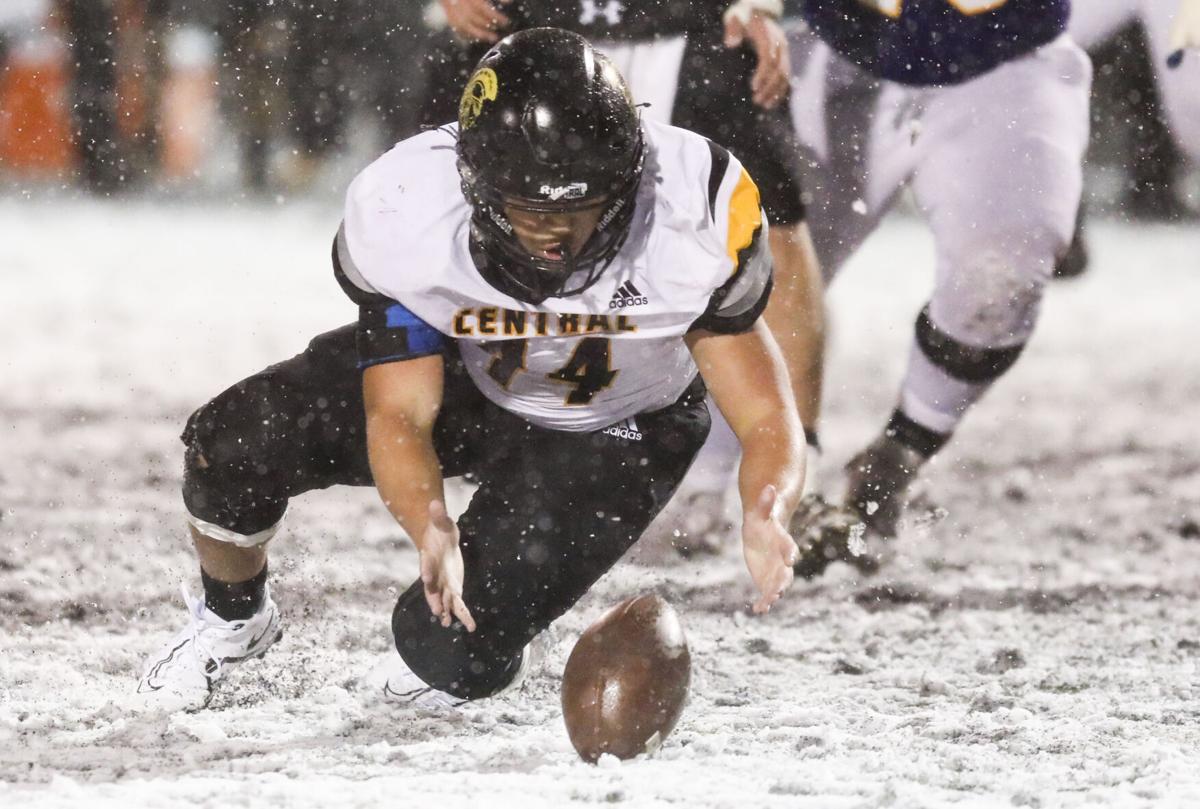 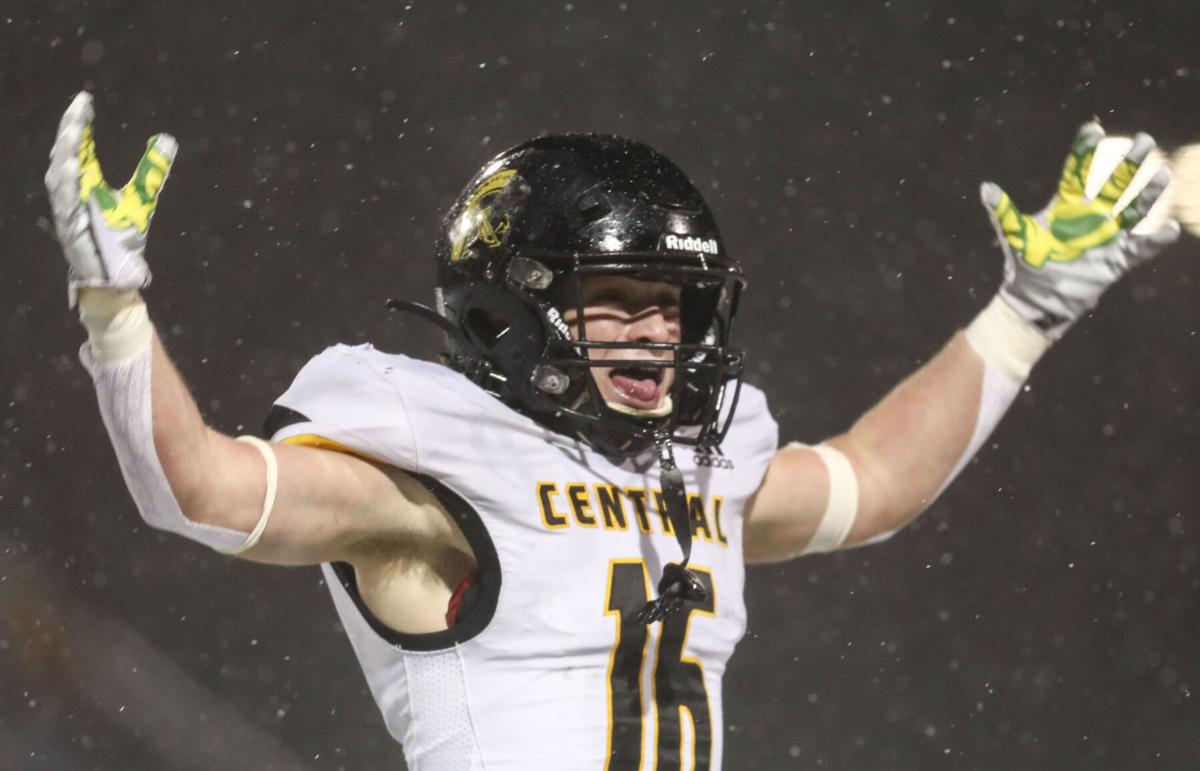 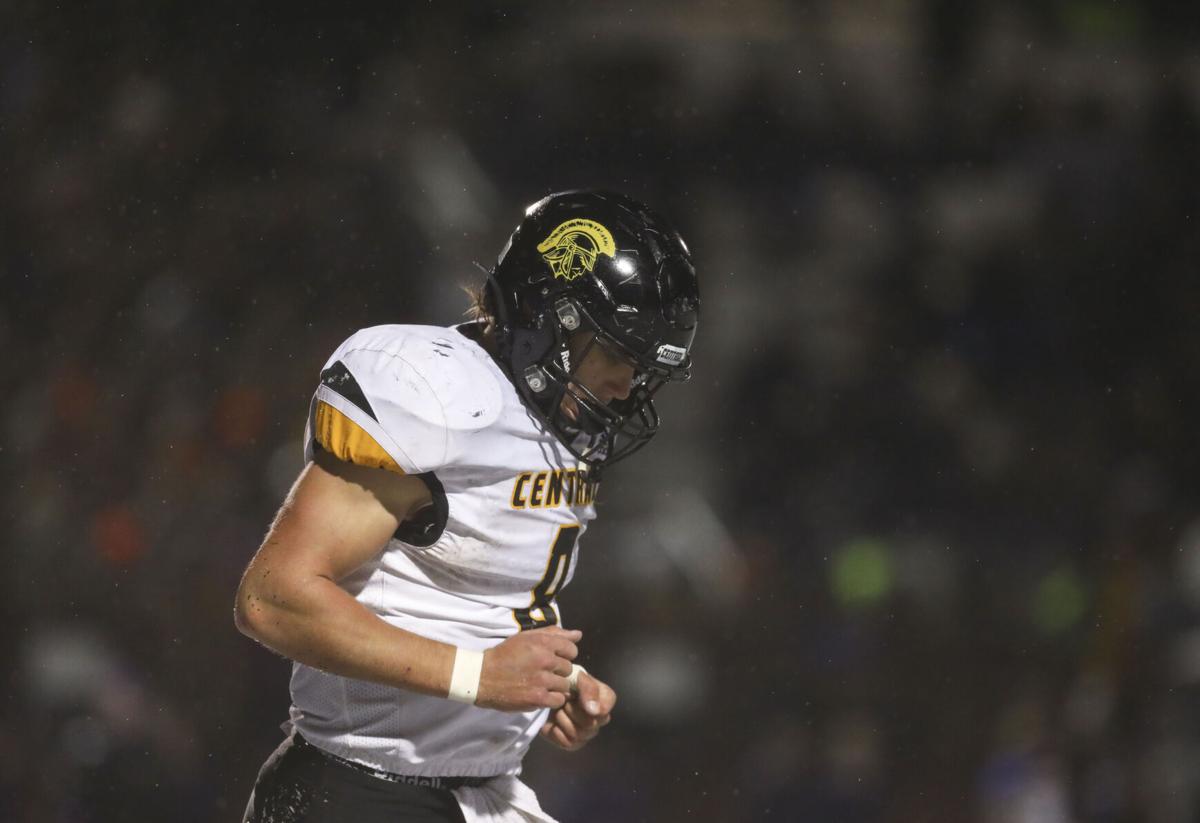 Traverse City Central’s Josh Burnham runs off the field during the MHSAA Division 2 Regional Championship at Grandville High School in Grandville on Friday. 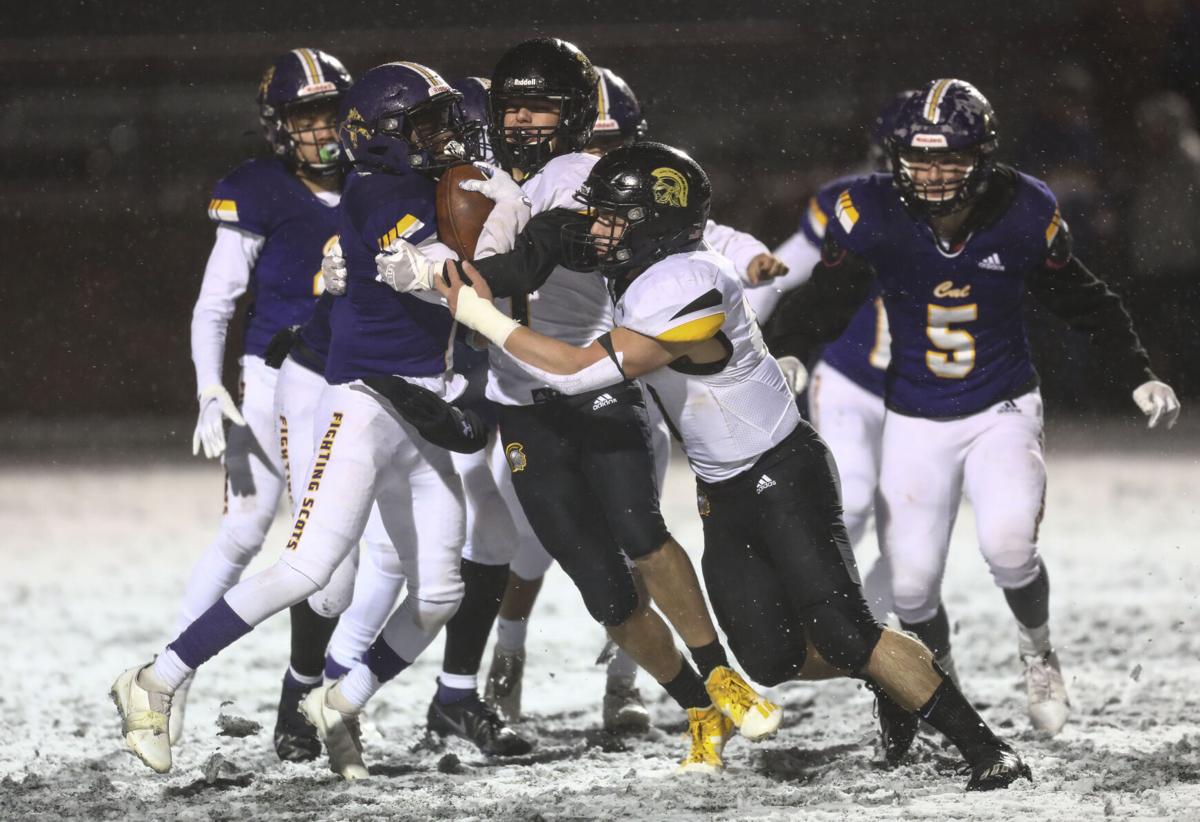 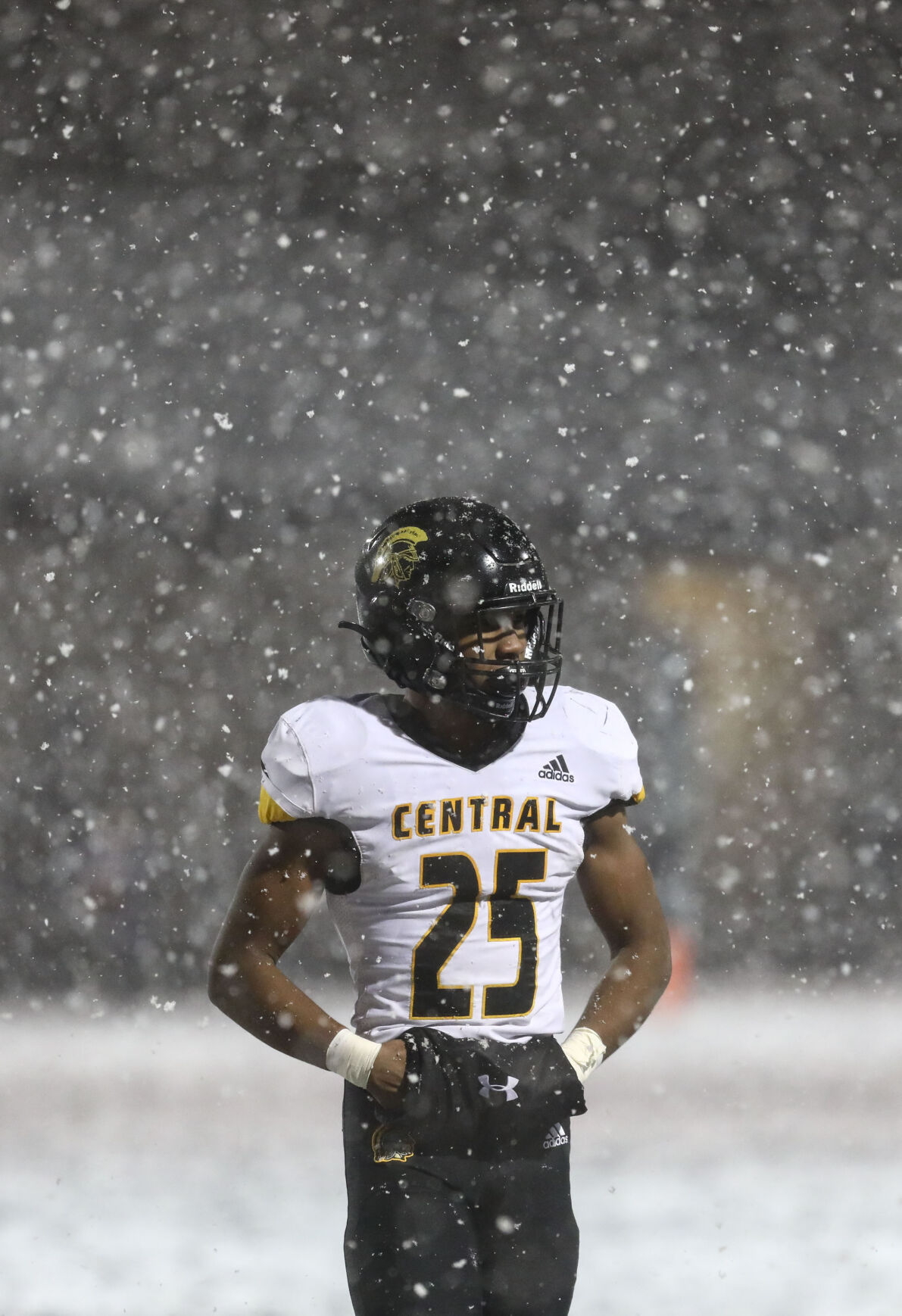 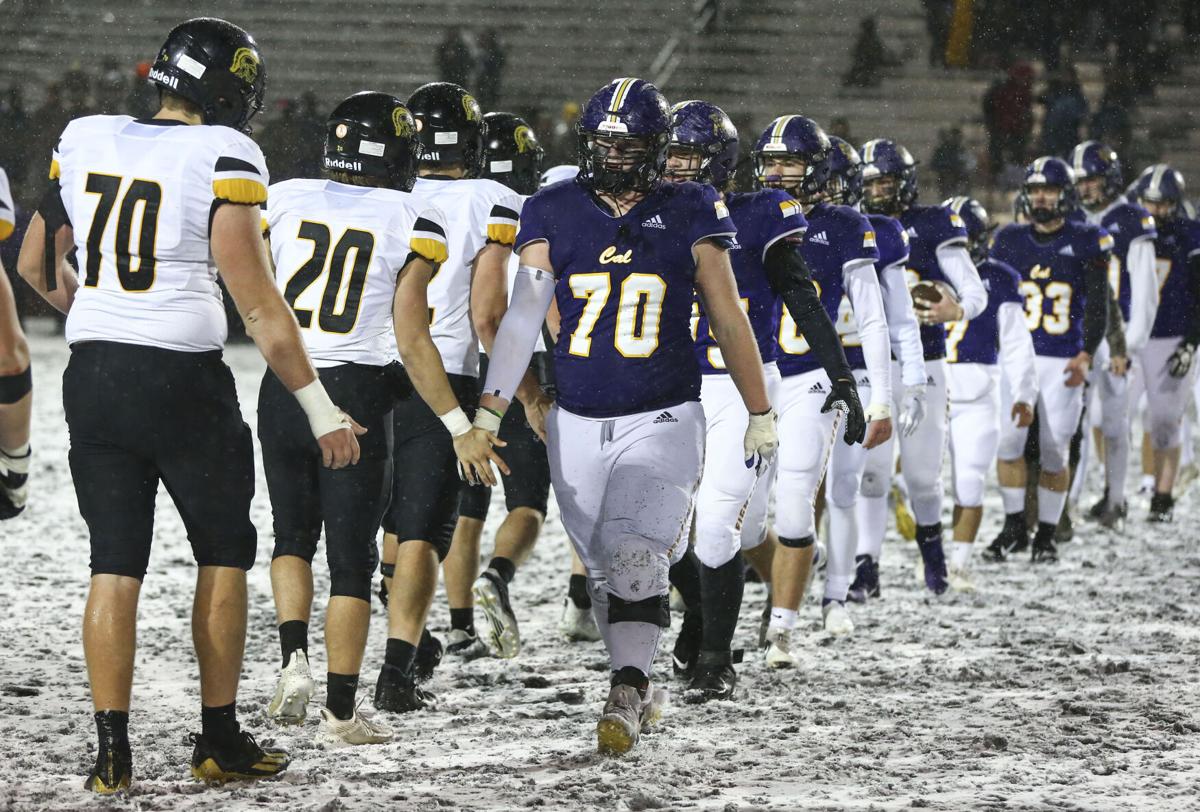 The Traverse City Central Trojans take the field for the MHSAA Division 2 Regional Championship at Grandville High School in Grandville on Friday.

Traverse City Central’s Josh Klug and Josh Burnham wait for a snap during the MHSAA Division 2 Regional Championship at Grandville High School in Grandville on Friday.

Traverse City Central’s Josh Burnham runs off the field during the MHSAA Division 2 Regional Championship at Grandville High School in Grandville on Friday.

No. 3 Traverse City Central is back in the Division 2 semifinals. Central won 42-14 over No. 4 Caledonia in a snow-filled playoff game Friday night in Grandville to win back-to-back regional titles for the first time in school history.

“It’s like we told our kids, we expected to come down here and win,” Central coach Eric Schugars said.

The Trojans (11-1) allowed one offensive touchdown in the second quarter but managed to maintain at least a two-score lead the entire game. The second TD was on a fumble scooped and scored by Caledonia’s Owen Graham.

But that was pretty much it. Kickoffs from Everest Noyes sailed into the endzone almost every time he touched the ball — even going with and against the wind and snow — to force Caledonia to play with a long field.

Schugars said if the Trojans could force the Scots to go the length of the field, they’d be in good shape. They sure were. Caledonia went three-and-out on their first two drives and finished the game 4-for-13 on third-down conversions.

Burnham, a Notre Dame commit, scored four rushing touchdowns (25, 1, 5 and 21 yards). He led the game with 212 yards on a 7.3 yard-per-carry average. He didn’t have the longest play, however. That belonged to typical slot receiver Carson Bourdo who had a 75-yard run with Burnham lined up in the slot as his lead blocker. Josh Klug took the snap at quarterback.

“My instincts just took in,” Burnham said. “I remember my junior year, that’s when I did a ton of blocking stuff as H-Back. I saw him coming around and I figured I had to get a block.”

Bourdo also returned a kickoff 80 yards for a score and came down with a first-half interception — the second game in a row he had both. He led the Trojans in tackles with 7.5.

Snow fell from the moment the coin was flipped until the final whistle. Temperatures hovered just below freezing. At halftime, a Grandville athletics staff member drove the infield tractor typically used for baseball to clear the field stripes, but snow covered them before the end of the third quarter.

Both teams turned the ball over twice on fumbles.

“We played in January last year. We’re used to this cold. We practiced on Thirlby Field with a foot of snow,” senior linebacker Conrad Dobreff said, who added it’s the most that it’s ever snowed for a game he’s played in. “You’ve kind of got to push through it. You have to realize the other team is playing in it too, so nobody’s at an advantage.”

Schugars said the team received word of the field conditions after a parent sent a photo of the field during the team’s walkthrough at Ferris State. It was snowing there, but Big Rapids was also a little bit more to the north than Grand Rapids.

“We were built for this,” Schugars said. “Our team was built to win in any condition.”

The Trojans will meet No. 2 South Lyon, which outlasted No. 8 Portage Central 29-23 in overtime at home. The site of the game hasn’t been announced but all divisions will play next Saturday, Nov. 20.

“We can’t overlook anybody,” Burnham said. “We just got to go in and do what we do — execute, and just play our game.”

Damon Livingston recovered a crucial fumble … Noyes made each extra point he attempted. … It’s Central’s seventh semifinals appearance in school history. ... Central had the advantage in total offense 372-190 … The Trojans tallied 10 penalties for 85 yards compared to the Scots’ three for 25 yards. One holding call negated a Burnham TD run. … Central had the advantage in possession 28:13 to 19:37. … Brock Townsend was Caledonia’s leading rusher with 85 yards. Mason McKenzie threw for 85 yards with six completions on 20 attempts.

No. 1 Warren De La Salle plays Roseville Saturday. The winner of that game plays Livonia Franklin in the other Division 2 semifinal after it beat Waterford Mott 43-26.

TC Central preps for the Fracassi brothers of South Lyon