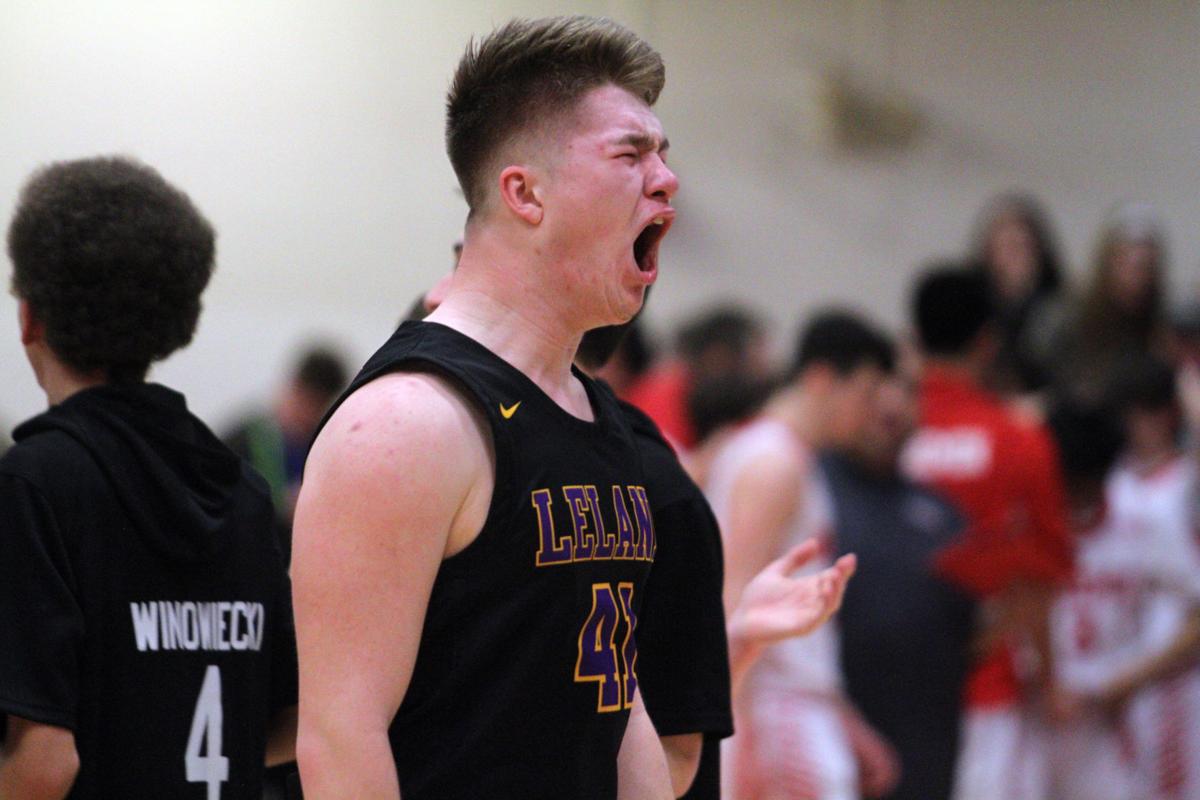 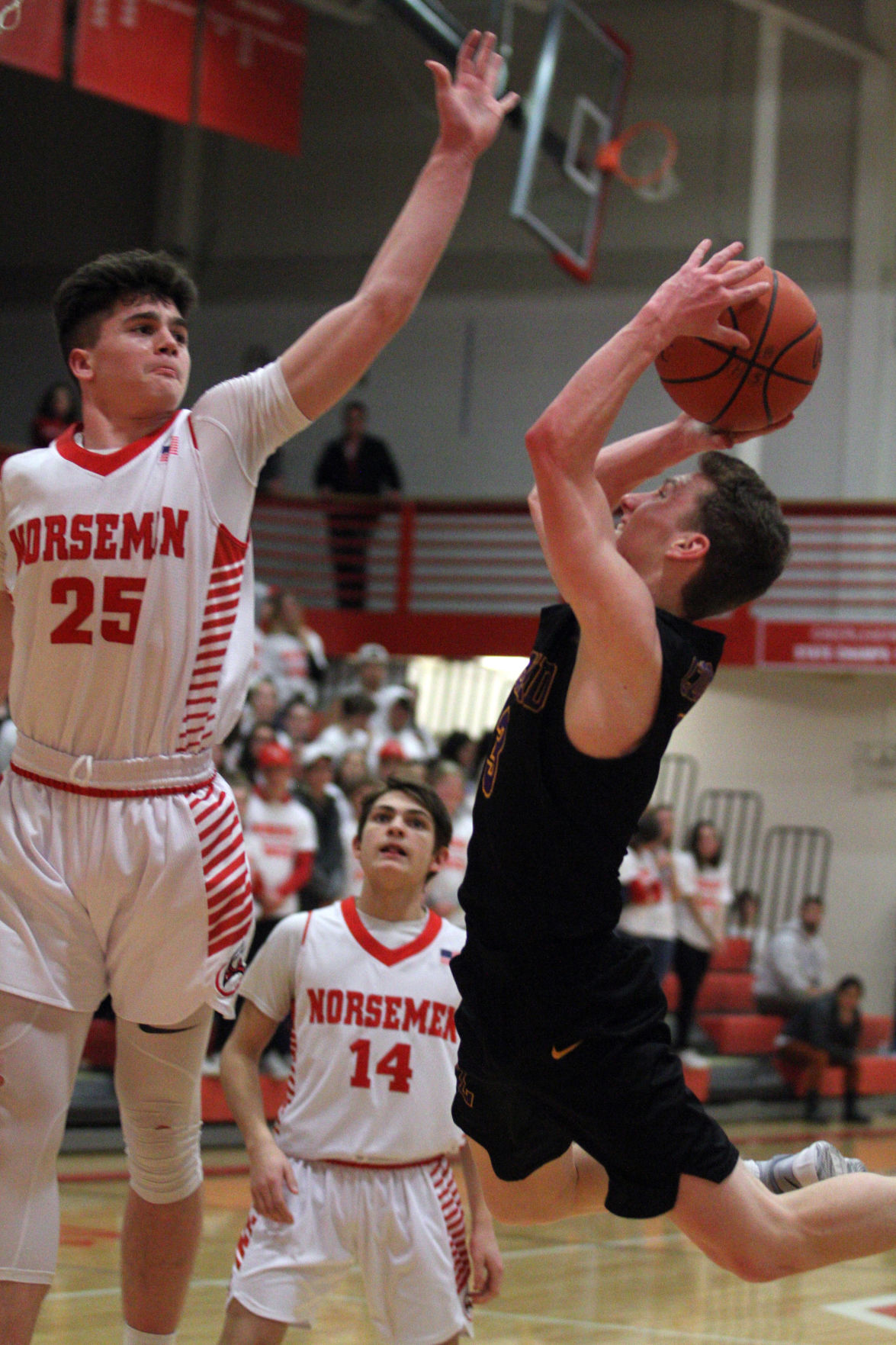 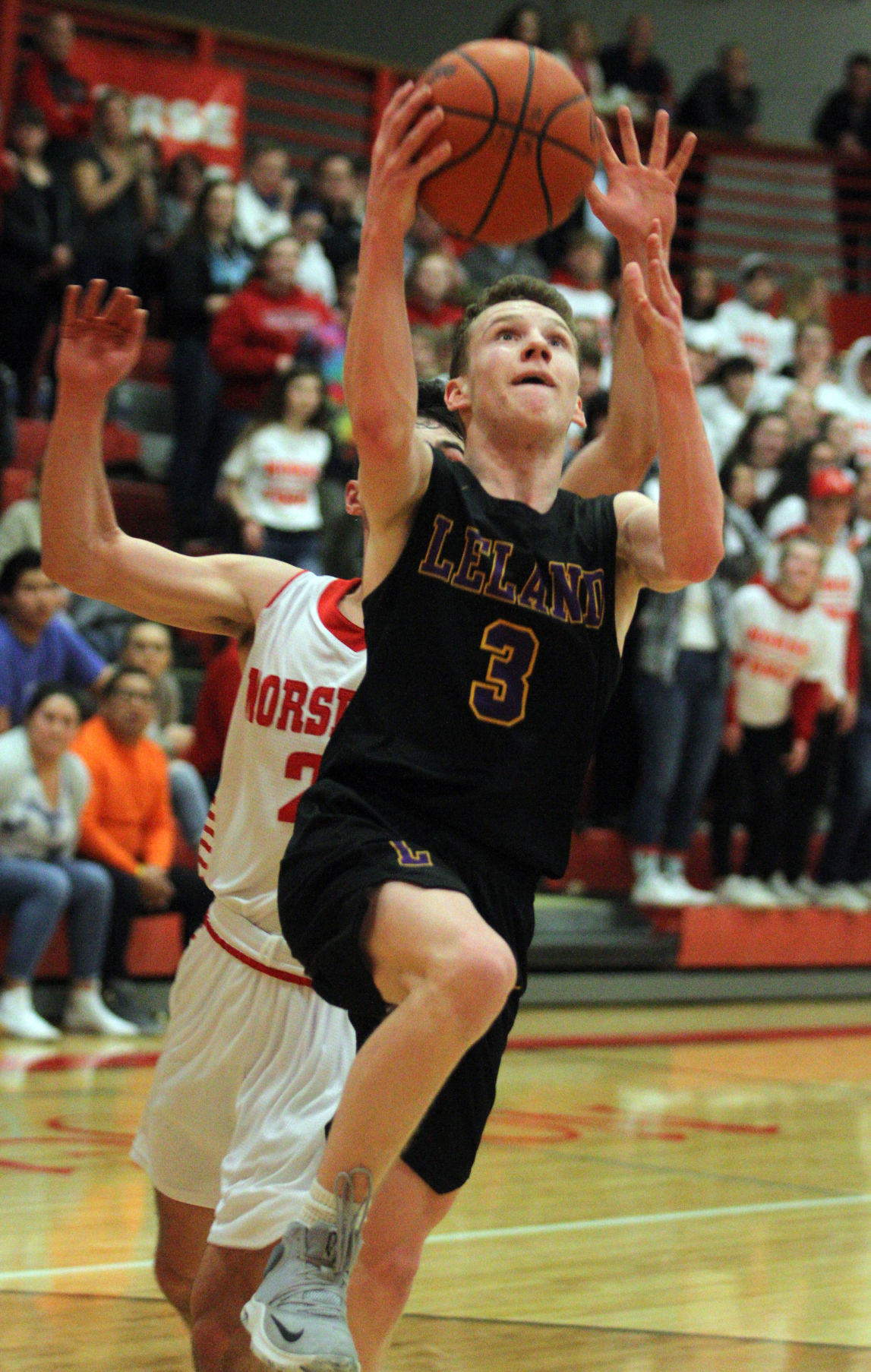 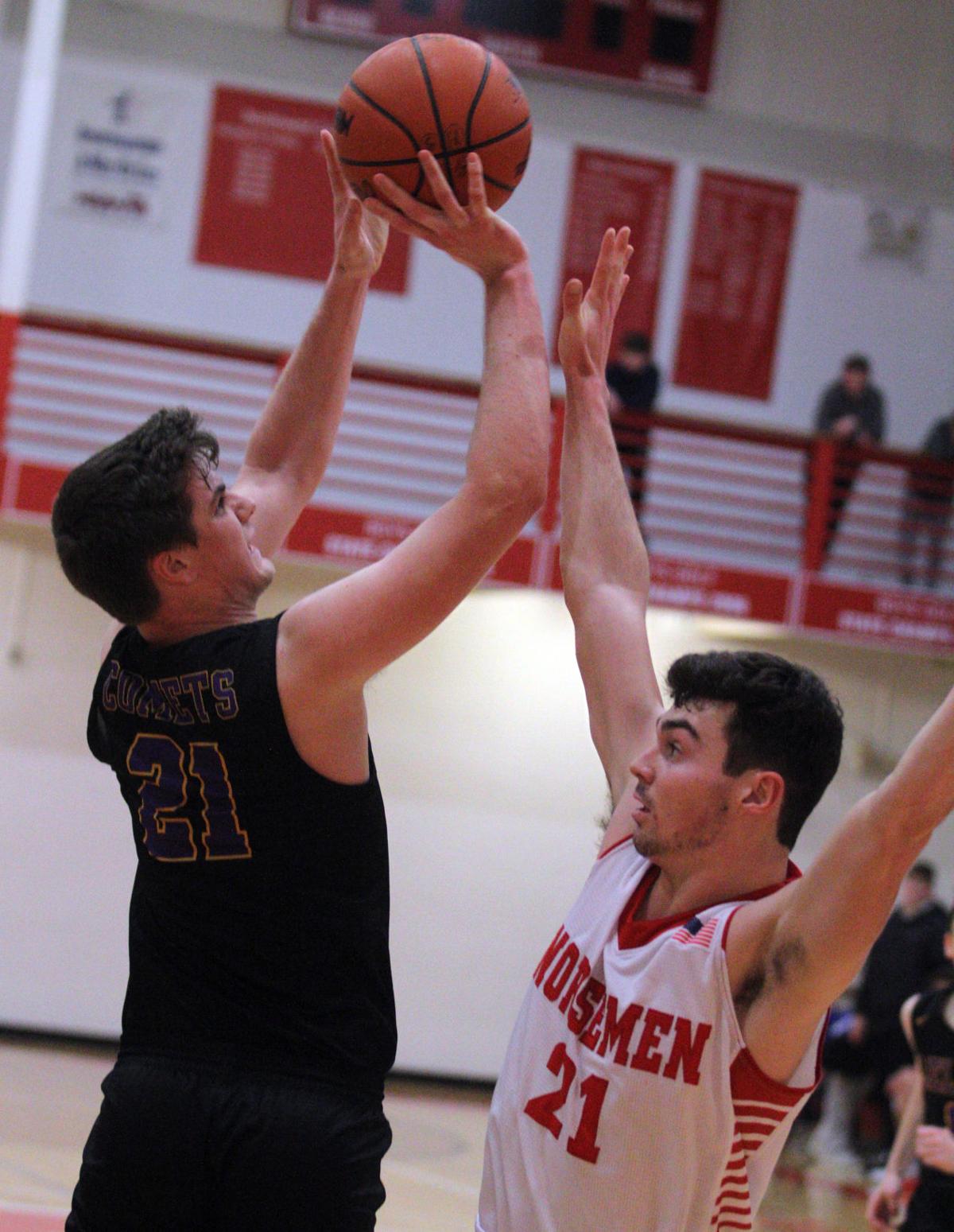 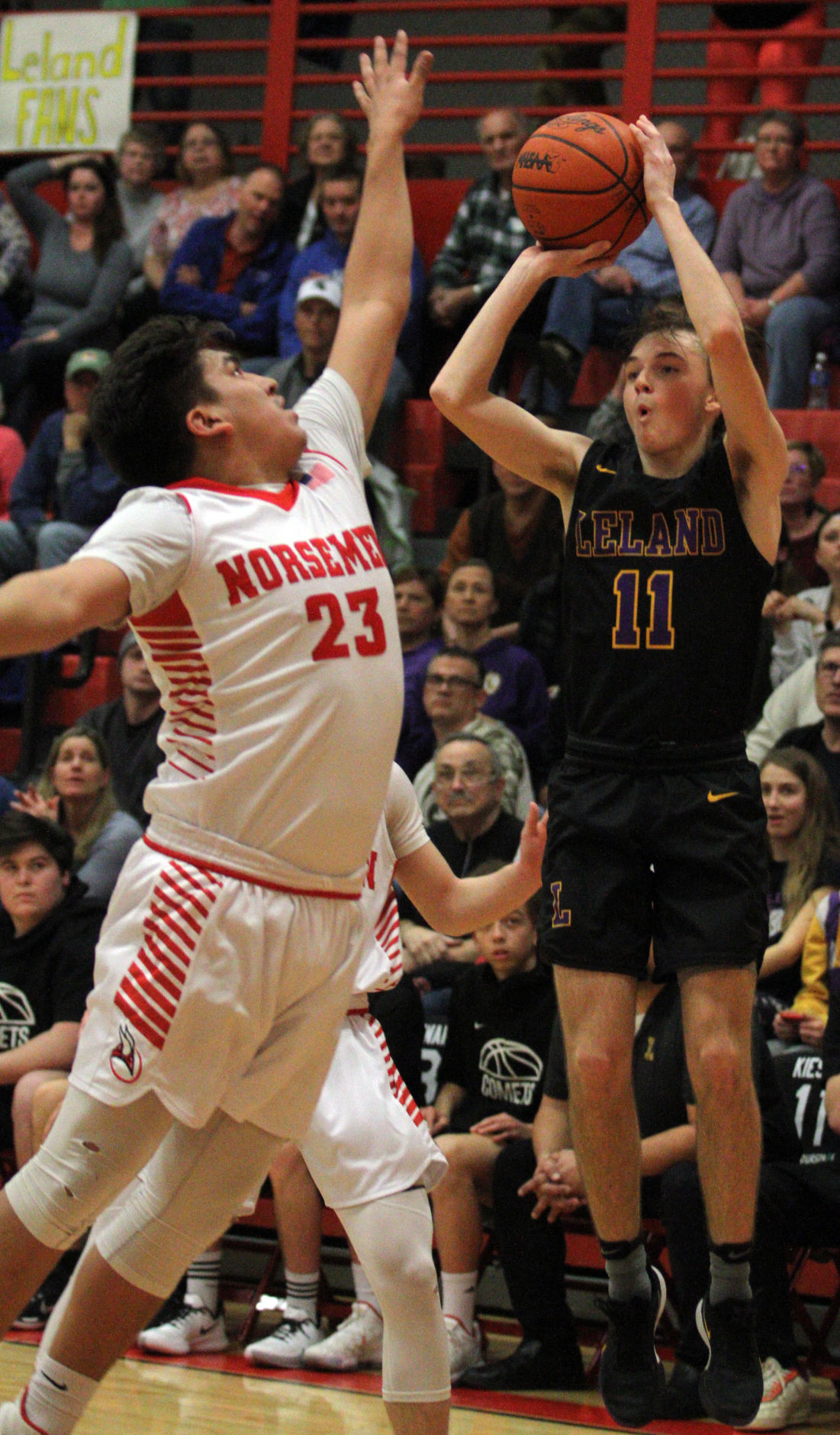 SUTTONS BAY — Wyatt Sirrine made his one shot count.

Sirrine came in when Jayden Holston fouled out, seeing his first action of the game with exactly three minutes left.

Two minutes and 51 seconds later, he’s a hero, with the Leland student section chanting his name and chest bumping the junior as he left the floor following Monday’s Division 4 boys basketball district quarterfinal at Suttons Bay.

A game that looked like it was completely unraveling — Leland led by as much as 16 in the second half — came back together again in one quick putback bucket, as Sirrine swooped down the baseline to gather in Gavin Miller’s missed shot off the backside of the rim with nine seconds left to give Leland a 55-53 victory.

Leland played most of the game using only six players to Suttons Bay’s 12 that shuffled in and out. Sirrine was No. 7.

“He played great, came up big for us,” Miller said. “I know we have bench players that can play. They came up big today.”

The game didn’t feature as many points as the district’s 91-76 opener between Lake Leelanau St. Mary and Buckley that the Eagles won, but it boasted all the drama.

Miller led the Comets (12-9) with 14 rebounds and 18 points, including hitting 9-of-14 from the free-throw line. Leland moves on to Wednesday’s 8 p.m. semifinal back in Suttons Bay against Forest Area (12-8).

JJ Popp, normally one of Leland’s top scorers, added six points, eight boards and eight assists. He wasn’t the same after a third-quarter fall left him limping, and he fouled out with 3:53 left, bringing senior Keegen Royston back off the bench to finish out the game.

Suttons Bay (10-11) started chipping away at that 16-point lead late in the third quarter. Michael Wittman and Lleyton Krumlauf scored seven points over the last 52 seconds to go into the fourth down 43-32.

The Norsemen tied the game at 47-47 with 4:37 remaining on a Sean Wilson baseline 3-pointer. The Norse briefly took the lead 48-47 on a Hugh Periard free throw before Ryan Howard answered 43 seconds later with a baseline drive. Suttons Bay took the lead back again with 2:36 left on a Lucas Mikesell drive.

“We knew we could still play with them. We had to,” Miller said. “They’re dropping threes, and then we decided to go man, and that worked out.”

Eleven straight scores either tied the game or changed the lead to end the game, with Sirrine’s bucket the last.

“It’s a bitter, friendly, really tough rivalry between the two teams,” Leland head coach Jon Kiessel said. “Nobody ever wants to lose this game. That goes back a long, long time. I didn’t care what that lead was, it was never safe and I knew these guys were coming because they they wanted it bad.”

“He’s pretty fearless, a great kid,” Jon Kiessel said. “He just doesn’t have a whole lot of fear and he was clearly ready to go, like he’d been in there the whole game. We needed something, because things were not going well that whole fourth quarter.”

Oh, Snap: Royston to play right away at SVSU

LELAND — Saginaw Valley State is putting much of its special teams units in the hands of Keegen Royston.