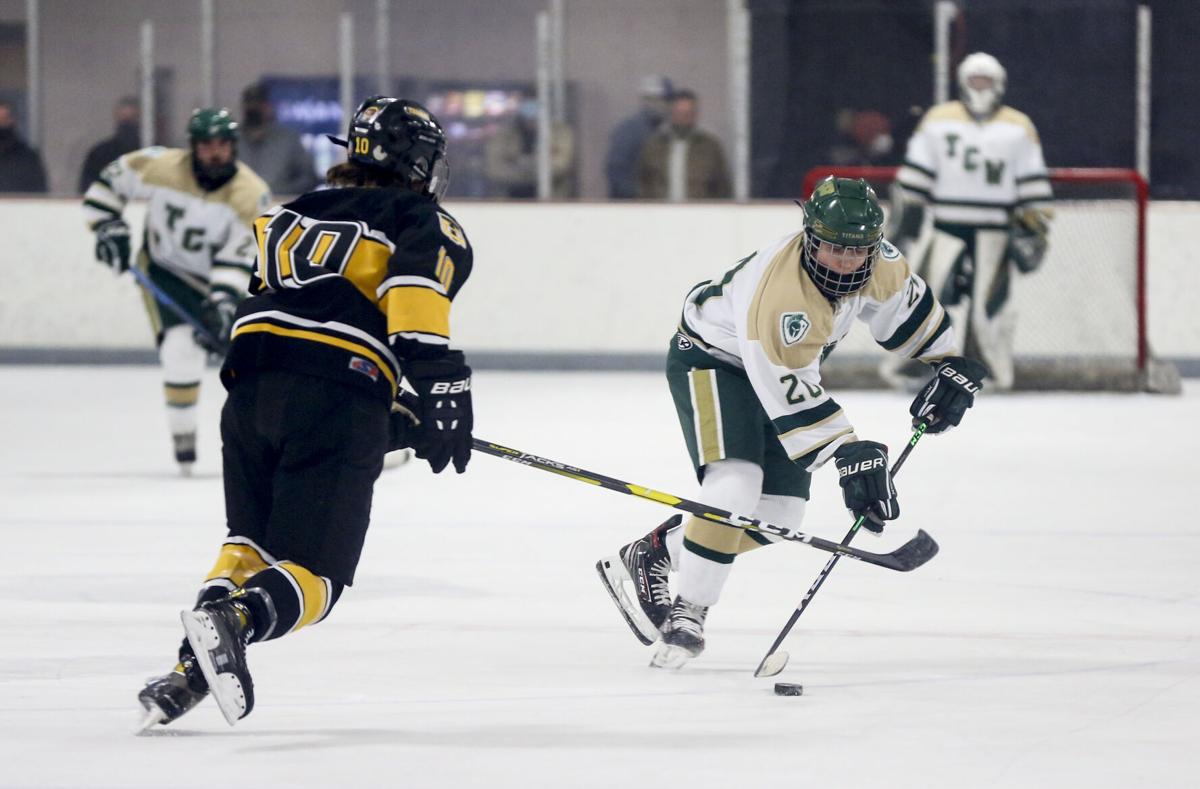 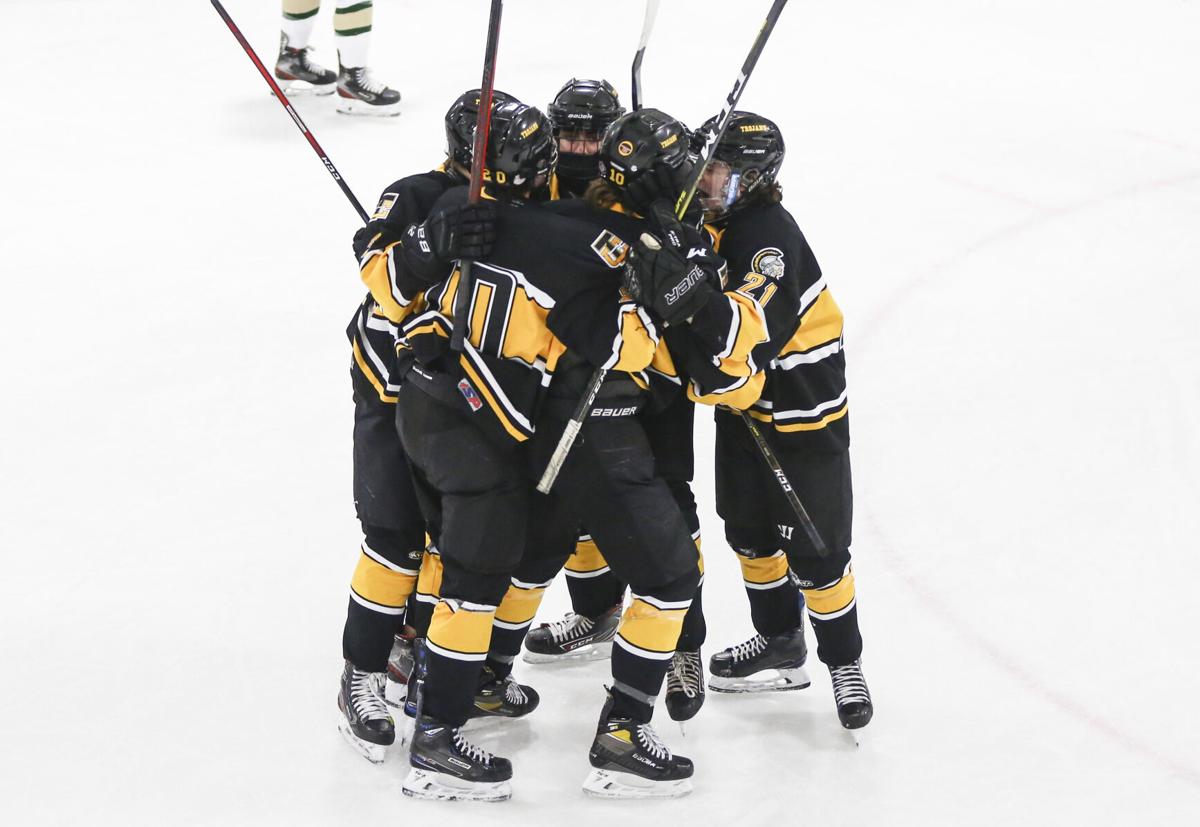 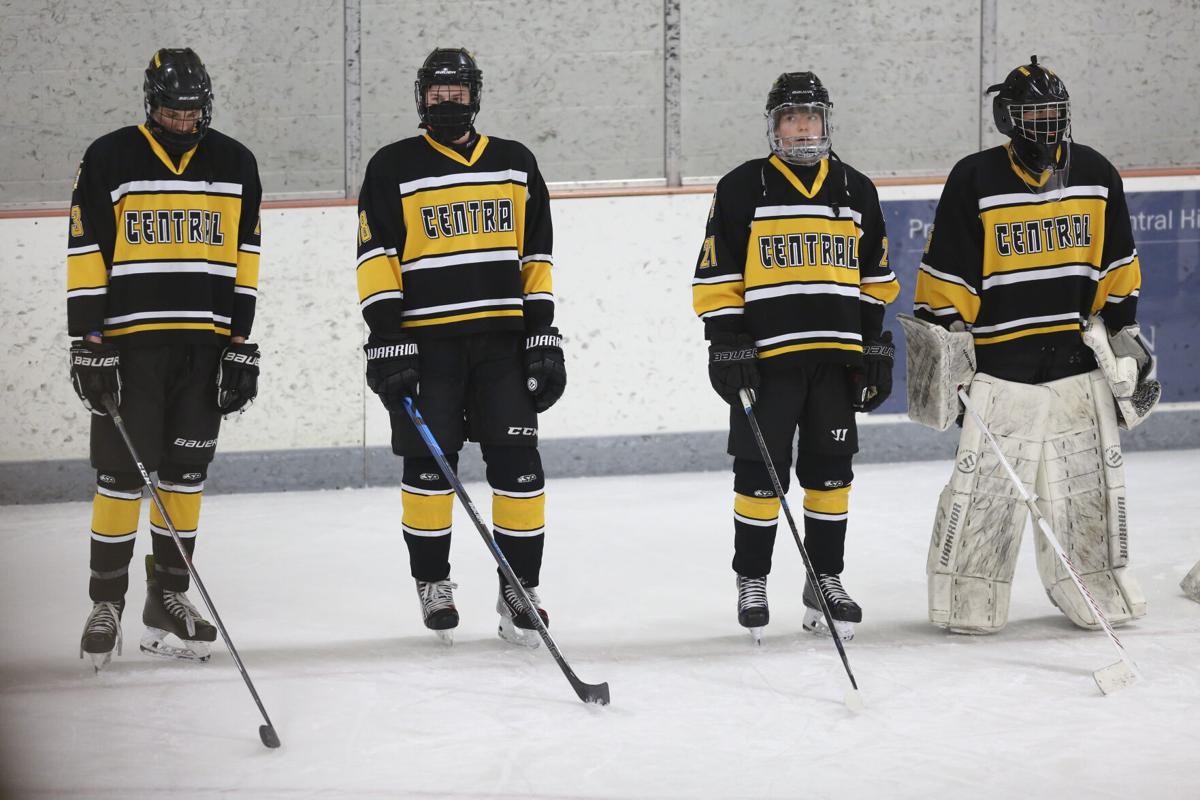 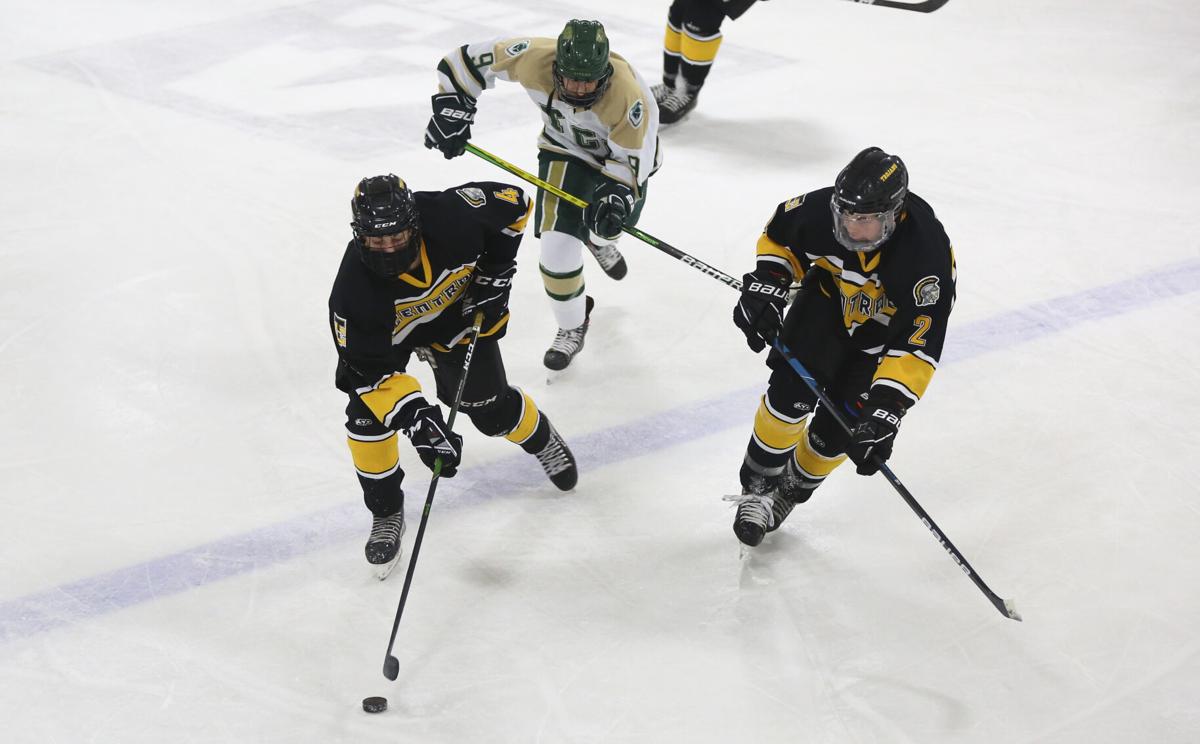 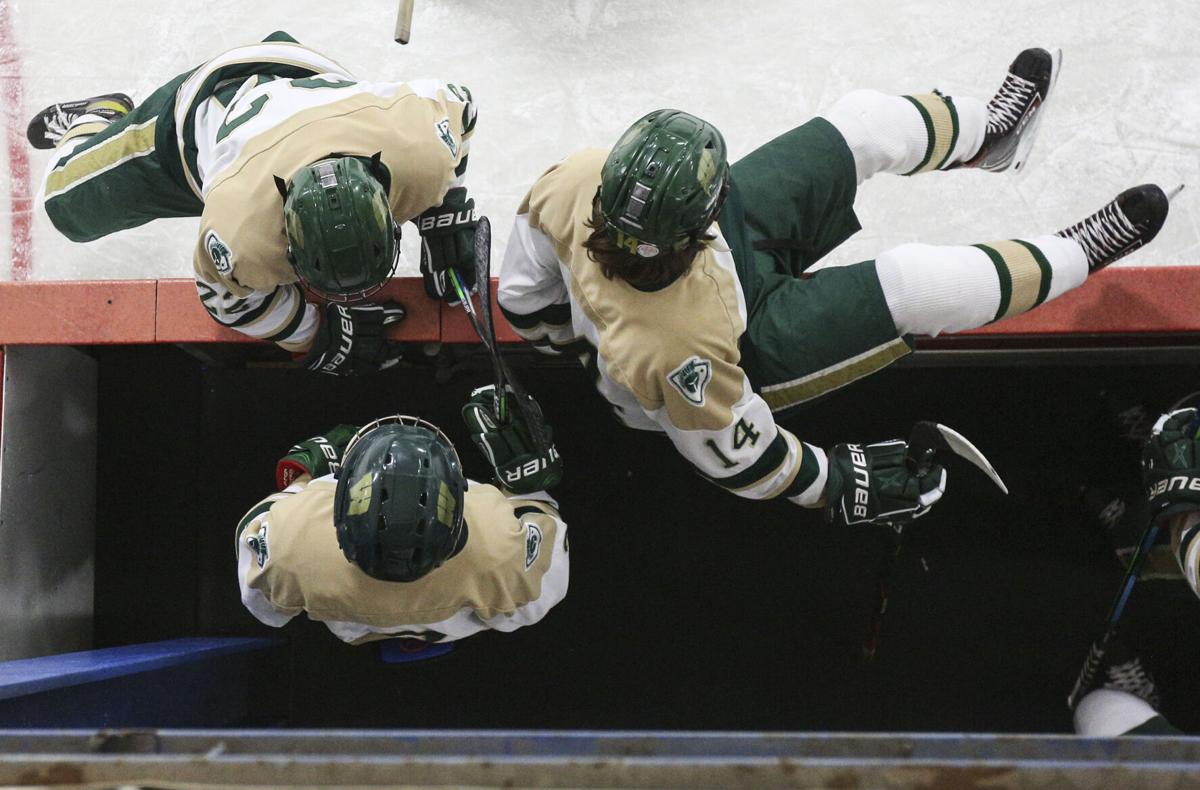 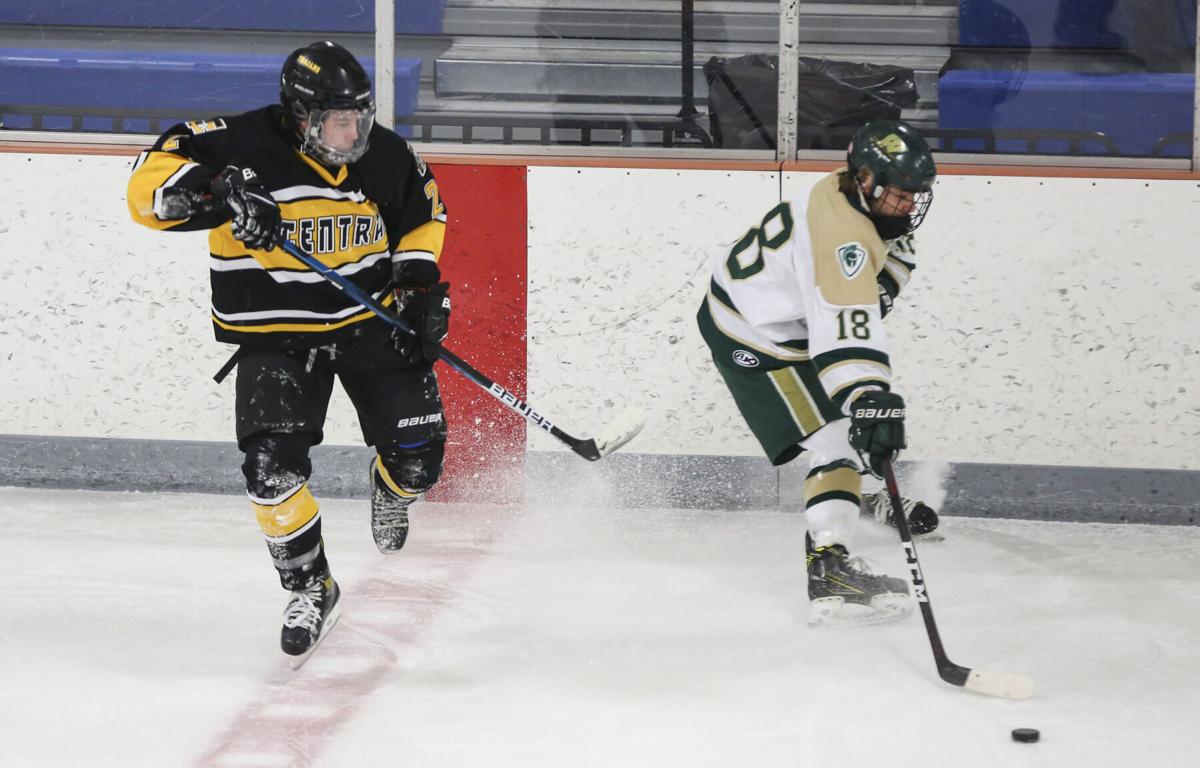 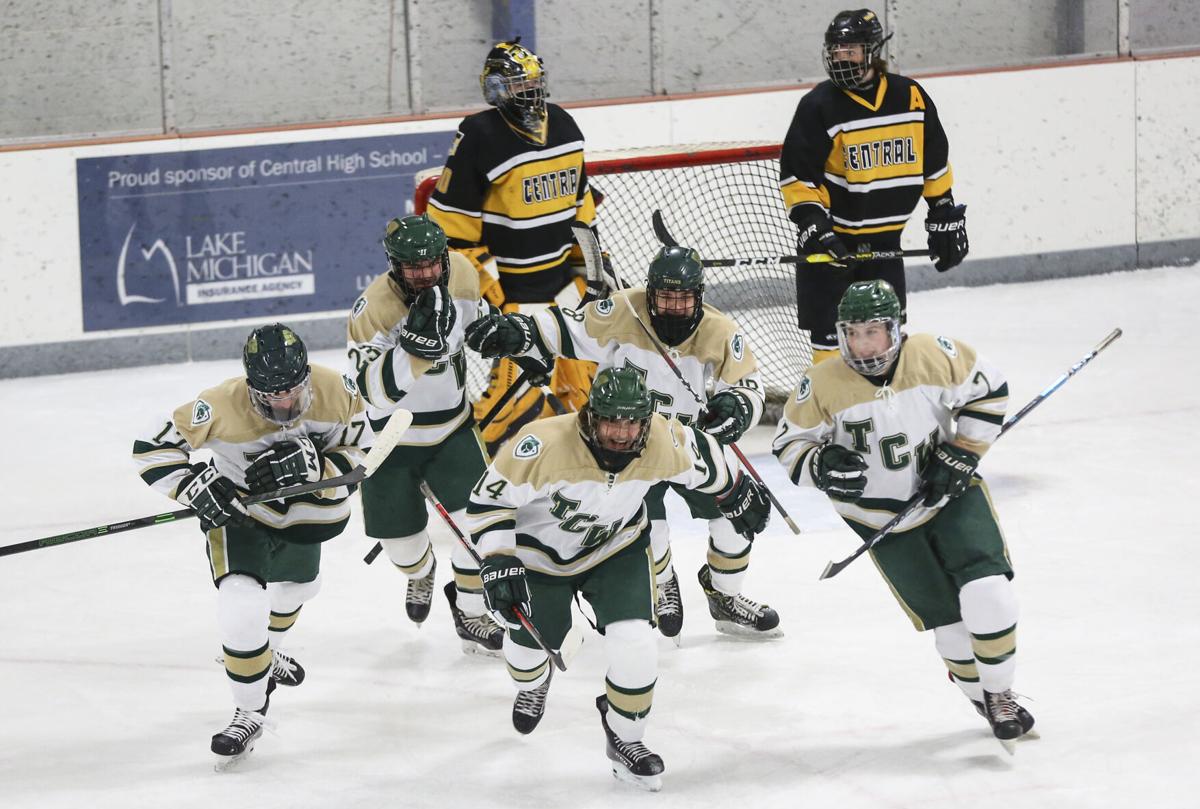 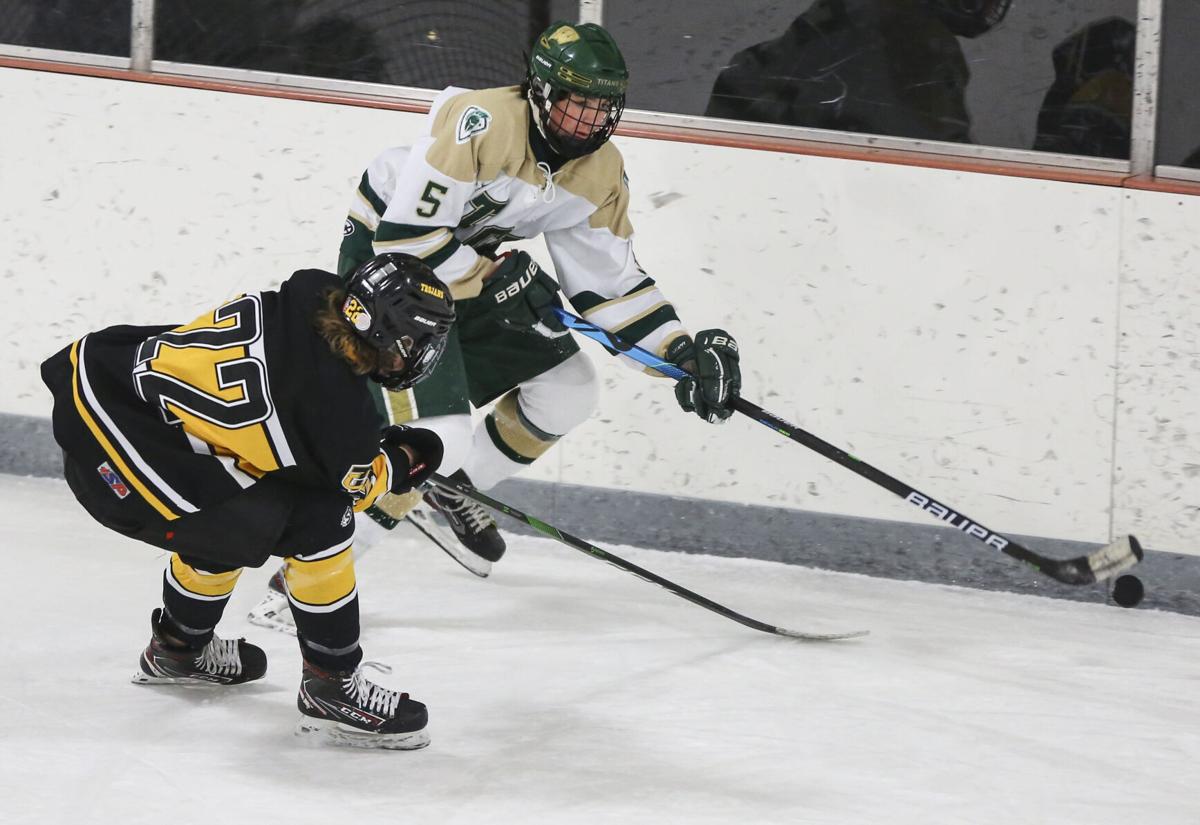 “He doesn’t say a lot or anything, not anywhere near as vocal as Chuck (Charlie Douglass) was but every bit as valuable” said Givens of the Trojans’ senior. “He just leads by example and does all the little things and the guys see that.”

Peters netted a hat trick to seal a 5-1 win over Traverse City West Friday night at Howe Ice Arena. It’s the first of two top-10 matchups between No. 9-ranked TC Central and No. 5-ranked TC West over the course of four days.

The two teams meet again Monday at Howe for the annual Jeffrey J. McCollough Memorial Challenge Cup. TC Central has a game in-between and will travel to Petoskey, Saturday.

Givens said he thought that the Trojans played more “gritty” Friday night than they had in a long time.

“You can see that guys were very committed to blocking shots, which we’ve talked about a lot,” Givens said. “We saw that tonight with guys sticking their feet out, doing whatever they had to do to block shots. In terms of grit, just moving pucks to open ice and not giving the puck away, unforced errors, I thought that was the best we played this year.”

The Titans found the back of the net first despite a few early looks for the Trojans.

Just over four minutes into the game, Josh Reece sent a puck down past two Central defenders and right into the sticks of Ryan Leslie and Jacob Dean at the near-side post. Dean had the last touch on the puck, finding the crease between him and Grant Neuhardt to give the Titans the early lead.

With 11:01 to go in the first period and less than two minutes after Dean’s goal, Central junior Chase Adams scored off a pass by Ethan VanderRoest to tie the game at one. The score held for the rest of the first period, and then for the first seven minutes of the second.

The Titans couldn’t control the puck in Central’s zone for longer than a few passes and managed just two shots until the first intermission.

“We just had a hard time getting any momentum,” TC West coach Jeremy Rintala said. “When we did get momentum, they did a great job of blocking shots and taking away chances in front.”

Peters then had an assist on the Trojans go-ahead goal to begin his four point run.

He fed a pass on a 2-on-1 to help Will Dawson score, and then scored his first goal, unassisted, later in the second period on a faked pass that turned out to be a top-shelf shot to the far post.

TC West had a golden chance to claw back down two goals but failed to take advantage of it.

TCC’s Adams went to the penalty box with 3:00 to go in the second period on a boarding call — which got upgraded to a five minute major — to give the Titans a man advantage to close the second and start the third.

Regardless, the Trojans penalty kill line out-shot the Titans to survive the entire length of the major. Twenty seconds after the Trojans got back to full strength, Peters scored his second goal, assisted by Dawson and Hunter Folgmann.

“When you get through a penalty like that and shortly after it expires you score, that’s a huge momentum shift right there,” Givens said.

Peters sealed away the hat trick with the last goal of the game, beating Leslie, who tried to stop a one-on-one after breaking his stick. Even up three goals, Givens said the lead didn’t feel comfortable until Peters’ goal with 5:00 left in the game.

“I think everyone played good,” Peters said. “I thought we played with speed and teamwork. When we play like that we’re not going to get beat ... it’s going to be hard to beat us.”

Rintala said the Trojans are a hard team to play against, and he felt like there were times his team didn’t work hard enough. As for the rematch with Central on Monday, the Titans coach said it’s back to the drawing board.

“Hockey’s a weird game,” Rintala said. “You can play the same team 10 times and have 10 different types of games. At times I feel like we did play OK, but they definitely outplayed us tonight.”

The Titans (6-3-2, 2-2-2 Big North) are dealt their second straight loss to another crosstown program after falling 3-2 to the Bay Reps, Wednesday.

The Reps have been the only team to beat Central, however, as the Trojans (8-1, 5-0 Big North) stay undefeated in conference play and stand alone at No. 1 in the standings.

Despite his teams’ clear control over the league, Givens isn’t sure there will even be a Big North Conference champion this year with six league games cancelled involving Gaylord and Petoskey over the last two weeks.

“I don’t know how you can make that fair to everyone involved,” Givens said. “Some teams have played Petoskey and Gaylord, some have two games in, some only have one.”

Petoskey returned to the ice Friday and lost 2-1 to Sault Ste. Marie after having two-weeks of games cancelled, all against league opponents.

The Northmen currently hold the second place spot in the BNC at 2-1 and currently have two matchups scheduled before the postseason — TC Central at 6 p.m. Saturday in Petoskey and TC West at 6 p.m. on Wednesday at Howe.

“The playoffs are just so close, there’s not a lot of time to make them up, so I really don’t think there’s going to be any Big North champion this year,” Givens said. “Right now it’s more about just trying to play well at playoff time and ride momentum into that weekend.”

Decker: 'I gave all I had. What I kept is lost forever'