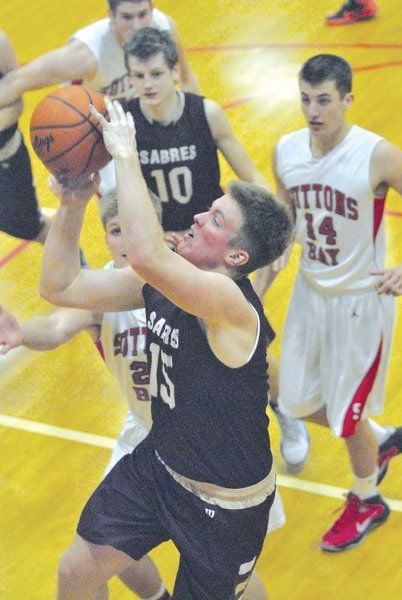 Record-Eagle/James CookTraverse City Christian’s David Bump (15) goes inside for a shot against the Suttons Bay defense of Lars Thornton (21) and Trevor Petroskey (14) as Chris Jasinski (10) looks on. 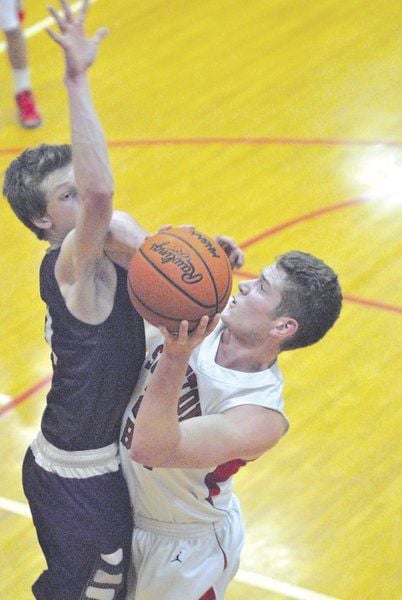 Record-Eagle/James CookTraverse City Christian’s David Bump (15) goes inside for a shot against the Suttons Bay defense of Lars Thornton (21) and Trevor Petroskey (14) as Chris Jasinski (10) looks on.

The Norsemen opened up an early 13-1 lead and closed the game with a 26-3 run in a 56-24 non-conference win Monday over Traverse City Christian.

“We haven’t been able to make those shots early on,” Suttons Bay coach Ron Anderson said. “I think we’re getting our basketball legs now instead of our football legs. Our football players are starting to make more shots. Some of that, we were lacking early in the year.”

The Norse started off with back-to-back triples by Devin Capron and Trevor Petroskey and Capron added another before the Sabres made their first field goal.

“They came out and smacked us in the mouth early — maybe staggered us a little,” Christian coach Kris Crosby said. “That kind of got in our heads. That’s hard to come back from sometimes.”

It was Suttons Bay’s third straight win after starting the season 0-4.

TC Christian struggled from the field all night, shooting 8-37 from the field, including 0-12 from 3-point range. The Sabres were also only 8-22 from the charity stripe.

“They were closed today,” Crosby said. “We got to the right spot, time after time after time. We just couldn’t buy a bucket. I felt bad for the guys. They kept doing the right thing, and it really didn’t open up for us.

“We had a size advantage across the board. We had the matchups we wanted. We just couldn’t complete them.”

It was like football season all over for the Norsemen, as Capron and Thornton connected just like the quarterback-receiver combination has numerous times on the football field.

“You hear about Capron to Thornton in football,” Anderson said. “But Thornton was everywhere, Capron was everywhere. Every time I looked around, Lars is coming out of nowhere and grabbing a rebound. And Capron, that hustle play he made ignited the whole crowd. It got me really excited.”

Thornton had 12 points and 14 rebounds and Capron finished with 12 points, including the play Anderson alluded to in the early fourth quarter, diving over the end line to save a possession and finishing it at the other end with a driving lay-up.

The fourth quarter was all Norsemen, who outscored TC Christian 23-3 in the period.

“They had 35 points after the third quarter, so it’s not like our defense was bad,” Crosby said. “Fifteen bunnies we probably missed. That’s going to get us a lead going into the third quarter and change a lot of things. The final score wasn’t as bad as it looked.”

But then Adam Arroyo came of the Suttons Bay bench for big rebounds and some inside buckets, despite foul trouble.

“He had been starting,” Anderson said of Arroyo. “But I wanted to get a different effect by having Gabe Rittenhouse starting and then saving Adam to come in against the bigger guys.”

The Sabres (3-3) host Manistee Catholic on Thursday, while Suttons Bay (3-4) travels to Glen Lake on Thursday.