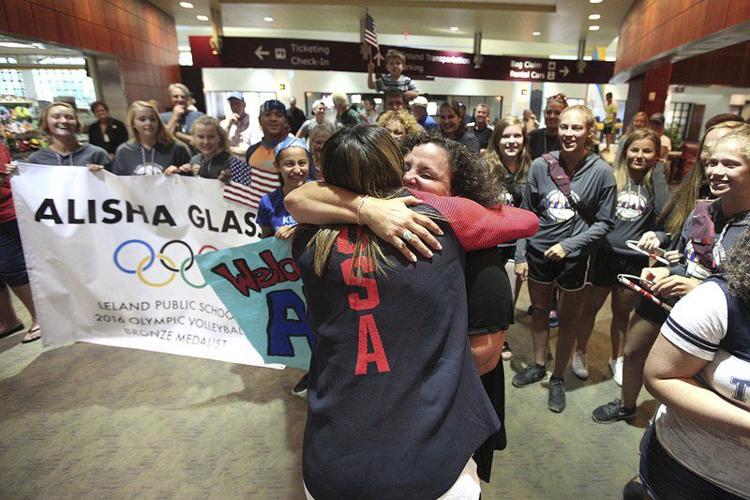 Surrounded by family, friends and fans, Alisha Glass hugs a family friend, Beth Osorio as she got off her plane at Cherry Capital Airport in Traverse City, returning from the 2016 Olympics in Rio de Janiero. 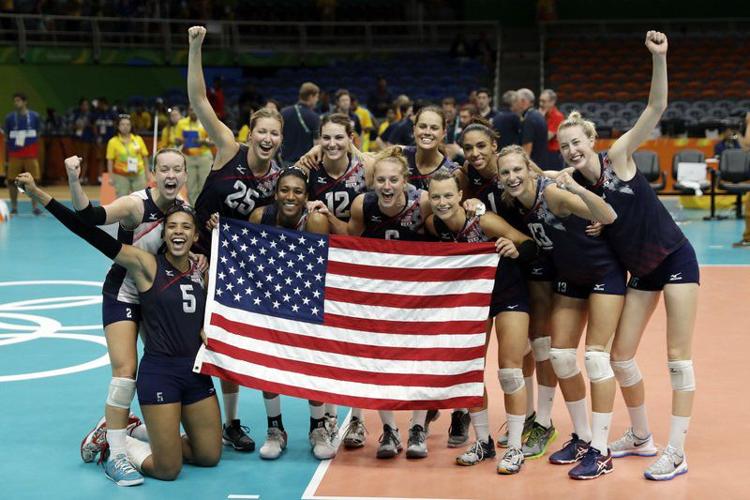 Members of the United States’ team pose for photographs after a women’s bronze medal volleyball match against the Netherlands at the 2016 Summer Olympics in Rio de Janeiro, Brazil, Saturday. 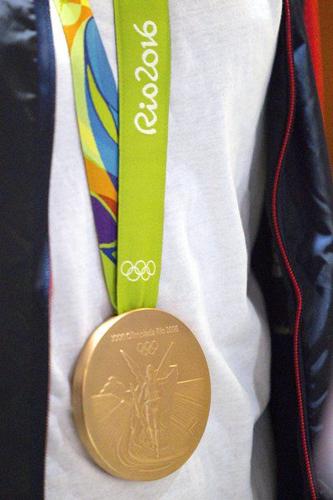 Alisha Glass wears her bronze medal as she got off her plane at Cherry Capital Airport in Traverse City, returning from the 2016 Olympics in Rio de Janiero. 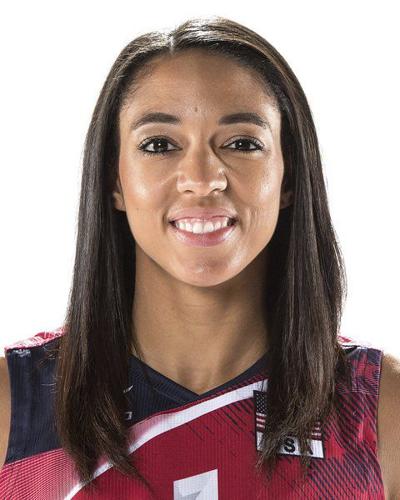 Surrounded by family, friends and fans, Alisha Glass hugs a family friend, Beth Osorio as she got off her plane at Cherry Capital Airport in Traverse City, returning from the 2016 Olympics in Rio de Janiero.

Members of the United States’ team pose for photographs after a women’s bronze medal volleyball match against the Netherlands at the 2016 Summer Olympics in Rio de Janeiro, Brazil, Saturday.

Alisha Glass wears her bronze medal as she got off her plane at Cherry Capital Airport in Traverse City, returning from the 2016 Olympics in Rio de Janiero.

TRAVERSE CITY — Alisha Glass is done playing volleyball for awhile, but that doesn’t mean she can’t take a victory lap.

Glass, who said she’s taking a break from the sport after capturing a bronze medal at the Rio Olympics, returned to the Grand Traverse region Friday night.

The Leland native said she won’t use the term “retire,” because that’s too permanent.

“I’m not going overseas anymore, and I’m putting everything on hold,” Glass said.

Glass, 28, played for Imoco Volley Conegliano in Italy prior to the Olympics, where she was the United States’ top setter.

“I’m taking some time off, and I’m going to spend some time with my family when I can and my boyfriend, wherever he ends up, and just kind of do the normal life,” Glass said Friday from O’Hare International Airport in Chicago on her way to Traverse City from California. “I’ll see if that doesn’t pull me in a different direction.”

Glass’ boyfriend, former NBAplayer Josh Childress, played last season with the Texas Legends ofthe NBA D-League after spending eight seasons in the NBA and another four years playing overseas in Greece and Australia. He played two seasons at Stanford, and returned to complete his degree in sociology in 2013.

The town of Leland put on a welcome-home ceremony Friday night, with community members, friends and family meeting her at Cherry Capital Airport, complete with a police escort to Leland. A celebration took place at Leland Public School, followed by a press conference.

“I would like to say thank you to everyone that watched all our games and supported our journey,” Glass said. “That support was incredible. I know everybody has their own stories, but I don’t know that everyone gets that kind of support. It was amazing, and I just want to say thank you for everyone who gave up their time and their voices.”

One of those was her aunt, Rebecca (Glass) McKee, who watched each of the U.S. women’s indoor volleyball match with friends.

“We all felt like we were there,” McKee said. “Pulling for her, being on the floor, being there, feeling what she’s feeling. Obviously, you can’t, but it just felt like you were urging every second to get that next point.”

Glass was one of eight Olympic volleyball athletes selected to the tournament’s FIVB Dream Team, along with fellow American player Foluke Akinradewo.

The U.S. was favored to win gold in Brazil, but a five-game semifinal loss to Serbia derailed those plans.

“It’s been a really cool part of the journey we’ve been on,” Glass said. “To get to what we’ve been working towards, and then kind of the emotional roller coaster of not quite getting exactly what we wanted, but finding a way to fight all the way to the end.”

The U.S. previously beat Serbia in pool play, but the Serbs defeated the Americans the year before.

“When it didn’t happen for them to get the gold, it just hit your gut,” McKee said. “It was edge of your seat at all times. The emotions were just right out there.”

The U.S. rallied to beat the Netherlands in the bronze-medal match two days later on Aug. 20.

“It was a mixture of emotions,” Glass said. “It was tough not getting a chance to get the gold and all that we have been fighting for. We talked about embracing that. And it’s tough, but we signed up to do tough things. We knew the only option would be to fight until the end and get that bronze. We quickly recovered and turned some of that sadness into grit.”

Glass said she’ll show off the medal during her time in Leland, but is looking forward to receiving a wooden display box meant specially for Olympic medals.

“I’m under strict instructions to bring it home,” Glass joked. “It’s pretty heavy, so I wouldn’t want to take it everywhere I go.”

The team played every other day, so it was difficult for Glass to really visit much of Rio and see to many things, but she said being part of the opening and closing ceremonies was special.

All of the Americans who participated in the opening ceremony gathered in the volleyball arena beforehand.

“It was a cool environment, because we were all on an even playing field,” Glass said. “There were gold medalists in the group, first-timers in the group, different sports. And we were all there as Team USA. It was a pretty cool vibe.”

“You walk down this tunnel and everybody starts the ‘U-S-A’ chant. ‘U-S-A! U-S-A! U-S-A!’ That’s what a lot of people say is their best moment of the ceremony, and it was definitely a cool experience.”

Glass was named USA Volleyball Female Indoor Athlete of the Year for both 2013 and 2014, and Best Setter in both the 2014 FIVB Volleyball Women’s World Championship and 2016 NORCECA Olympic Qualification Tournament as USA won gold and earned spot in 2016 Olympic Games.

“When you’re truly at peace with giving it your all and going out the way you wanted in the best way that you know how, and then losing it is super sad and a little devastating,” Glass said. “But I think I’m walking away knowing we gave it our all and I’m so proud of the group and what we created as far as a culture.

“I’m really bummed that we don’t get to be the group that wins the gold, but I know we have set a course for the teams of the future to do it in a way that we can all feel proud of. I think we are closer to getting the gold, and some team will do that, and I will feel like I am a part of that.”