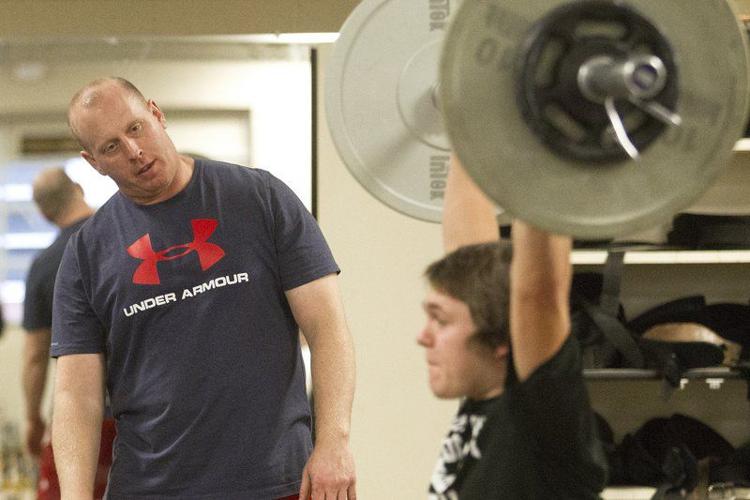 Doug Gle watches a student practice his lifting during weight lifting class at Traverse City Central High School on Tuesday. Gle is among those on the ground floor of starting a national coaches association for strength and conditioning. 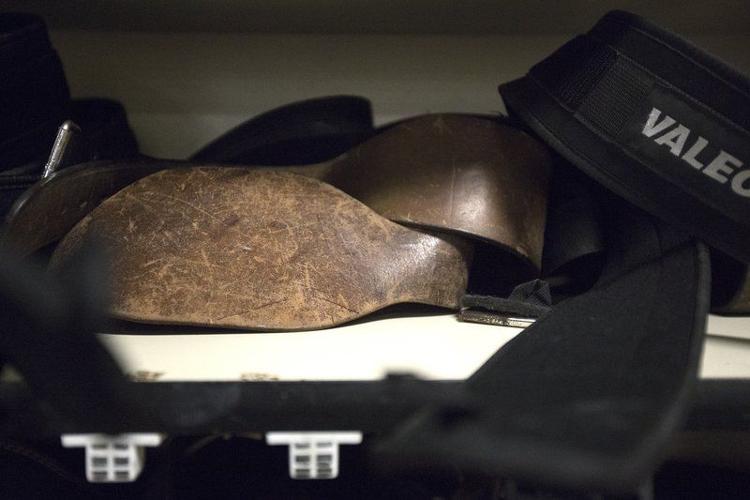 Weight belts are piled up after class. 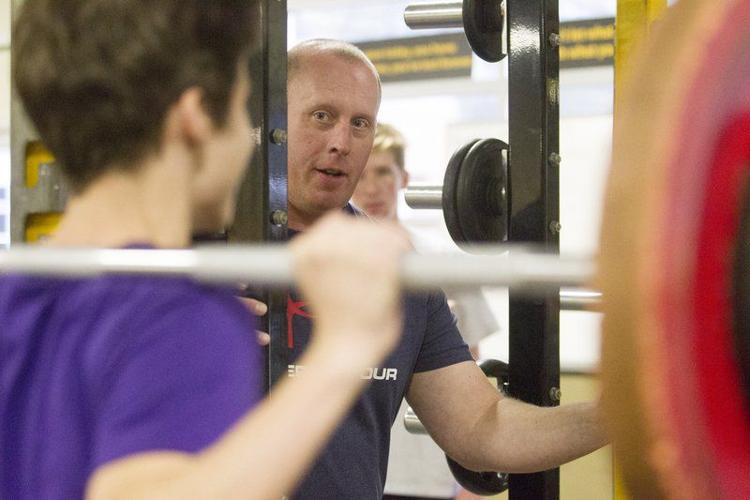 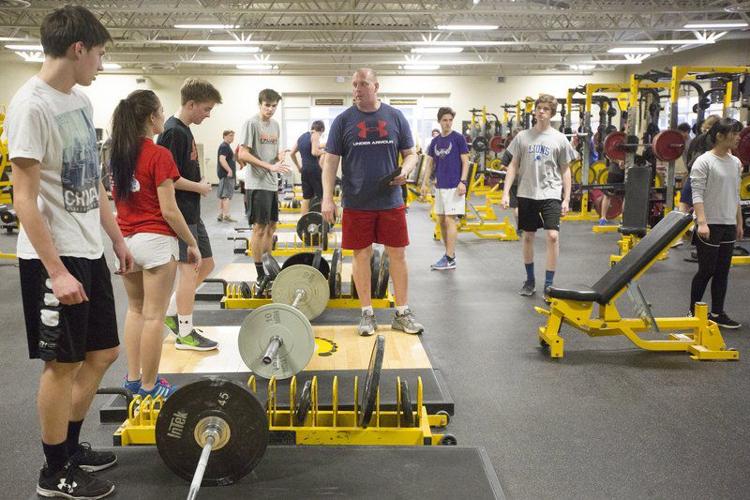 Doug Gle watches a student practice his lifting during weight lifting class at Traverse City Central High School on Tuesday. Gle is among those on the ground floor of starting a national coaches association for strength and conditioning.

Weight belts are piled up after class.

TRAVERSE CITY — The sound of metal clanging and grinding is clearly audible over rock music blaring from speakers.

The old football coaches' adage of sweat in the summer resulting in fall wins applies here. Only year-round. And not just for football.

The Traverse City Central weight room is the envy of many area schools — and even some colleges.

It didn't take long for Jared Nefcy — a 17-year-old junior at Central who moved to Traverse City from Ogden, Utah, nine months ago — to notice that.

"We had about the same size school, and we barely had one," the basketball player and golfer said. "We had to go to a college weight room to lift, and the college one wasn't even as nice as this one."

The weight room isn't only for athletes, but has certainly benefited the Trojans' athletic department.

Sean O'Brien moved to Traverse City in 2010 from Cleveland. The senior experienced something similar to Nefcy when arriving at TC Central, even though he came from a similarly large school system.

The architect of this 5,400 square foot muscle factory is Central's Doug Gle, a physical education teacher who oversees the school's strength and conditioning program along with his brother Mike.

At the beginning of the year, only 39 Kboxes were operating in the United States, Gle said. Eight of those reside with the Baltimore Orioles.

The $3,000 contraption is a kinetic flywheel that attaches to the student via an upper-body harness. As you push up, it pulls down with equal force, training legs to stop force as much as push it.

Think of an athlete who has gained a lot of power through lifting. It's like a car with a bigger engine and the same brakes. The Kbox improves those brakes.

"If it saves one kid (from a torn ACL), it's worth it," Gle says, "We're never going to get rid of ACL injuries, but we're going to do what we can to reduce them."

The GymAware program tracks velocity and power output per pound of body weight on the room's machines. It's linked to an iPad via Bluetooth to provide immediate feedback to the student as they're lifting. A screen displays the output for each rep, compares it to previous results and tracks improvements.

Teachers can see the results of everyone's sets, and the results arrive at a cloud-based leader board displayed on another laptop across the room.

Kids come back repeatedly during the day — some even when their class isn't in session — to see where they stack up on the leader board.

The program focuses mainly on correct lifting techniques that allow the student to accomplish three things: 1. Produce more force per pound of body weight. 2. Apply that force faster. 3. Make the force go in the right direction.

"They all question it early on," Gle said. "But then they buy in. It's fun to see the light go on."

The room even got a facelift last summer, with students like O'Brien chipping in to take out a wall that split the area in half.

Weights and Conditioning classes run 7 a.m.-3 p.m. each weekday. The room is also open from 3-4:30 three days a week after school, and 7-10 a.m. three days a week in the summer, aside from the required dead weeks at the season's beginning and end as required by the Michigan High School Athletic Association.

Even though it's an official Hammer Strength Training Center, the room is not currently open to public, but Gle said it has been discussed. Area coaches are welcome to stop in to observe.

The program began eight years ago with $10,000 from the school. There's a small budget each year to replace and/or refurbish aging equipment, but most of the funding comes from grants and fundraising. The Traverse City Track Club recently donated money to purchase new treadmills.

Class sizes range from 38-45 kids in the Weights and Conditioning classes taught by Doug and Mike Gle and Dan McGee. Another 20-50 usually drop in after school to work out.

Workouts are tailored to the athlete and time of the year. As athletes get to the end of their season, they back off on workout volume and somewhat reduce intensity, spending more time focusing on high-velocity lifts in the weeks leading up to the playoffs, regionals or conference meets in order to have them peaking for the postseason.

And it's not just a guy thing. Sophomore basketball and track athlete Sophie McCuien is one of a growing number of girls in the classes.

"I think girls feel like they're going to be judged," McCuien said. "But it's really not like that. It's just a good environment to get stronger. We have technology and programs that a lot of colleges are using."

One of the program's big advantages is helping reduce injuries to Trojan athletes.

"We play like 24 games and there were no serious injuries," Nefcy said of the basketball team. "Just a few minor ones for a couple players. That's pretty fantastic."

Basketball coach Jeff Turner had Nefcy in the weight program almost as soon as he enrolled at Central.

Junior soccer player Rebekah Cotton credits the class with being able to stay healthy during her first two seasons on the varsity pitch.

"I know a lot of soccer players who have gotten injured because they don't have the strength," Cotton said. "That's another way it's helped me. I haven't gotten injured.

McCuien tore an ACL in a 2015 summer basketball league and missed eight months, including four months of physical therapy.

Even after eight months, the knee was weak. She uses the class to continue that rehab and says her knee is getting close to 100 percent. The Kbox strengthens her legs to help prevent a repeat.

"For runners, it's very important to have that stability strength," Morse said. "It really reduces the chance of having an injury."

The program doesn't benefit only athletes.

O'Brien doesn't play sports, but has seen big gains in recent years. His squat has gone up to about 550 pounds — three times his body weight.

Just as big for him is the social aspect. With about 40 kids per class, he gets to know a lot of people quickly in the school of nearly 1,400.

"You learn how to get trust out of it," O'Brien said. "You get a lot of trust with people helping you with attributes you struggle with and helping you strive forward."

O'Brien has been in the program every year since seventh grade. It's something he likes to compete in, since Central doesn't have a powerlifting team like TC West does.

"It's everything I like to do," O'Brien said. "I like to stay in shape, and compete with the guys that are on the field in team sports."

However, athletes have seen big improvements as well.

Nefcy said he's improved his squat by 130 pounds since the beginning of the year, and his bench press is up 40 pounds.

Cotton said the life skill and mental aspects are almost as big as the physical side. It gets her into a routine, and has mental benefits of knowing how much she's prepared for a game in training.

"The work you put into it is what you're going to get out of it," Cotton said. "It keeps you focused and on task."

McCuien — who competes in sprints, high jump and long jump in track and field — has seen a three-inch vertical increase since the beginning of the school year.

"A lot of people that see our weight room from other schools are really amazed," McCuien said, "because it's so much bigger and there's more resources to help you."

Gle was on the ground floor when the National High School Strength and Conditioning Association formed this school year, maintaining a strong presence as the group's Northern Michigan Director.

The group's goal is educate, equip and empower coaches. The first national clinic was in February in suburban Atlanta, and a goal is to have each state host its own yearly clinic.

Pooling knowledge can only help coaches and teachers catch up in an activity sometimes entrenched in old techniques, even when technology is driving innovation.

"It's changing so rapidly," Gle said. "It's usually a coach who's doing the best they can with what they have."

Gle said part of the group's focus is to change the perception of weight lifting and training.

"Some people think harder is better," Gle said. "Don't get me wrong; we go hard. But the meathead attitude is rampant with some people."

There were already 25 NHSSCA members from Michigan by February.

"You can only learn so much from watching a video or reading a book," Gle said. "These people have been there. I wouldn't want someone to do what we do without proper education."

Strength and conditioning programs in the south are years — or decades — ahead of those in the North. Schools in the country's football recruiting hotbeds often have had dedicated strength coaches for a long time. That's just spreading as you go north.

No wonder only 29 of 2018's top 200 football recruits are from northern states, according to ESPN's recruiting database.

When Doug Gle was in high school at Brighton, working out was pretty much just hitting the bench press. His brother Mike was a guinea pig early on, and Doug went on to work at universities at Eastern Michigan, Western Michigan and Northern Iowa before settling in at TC Central in 2001.

He modified a college program to the high school level, using age-appropriate techniques.

Nefcy came to Traverse City not knowing proper form or how to perform a power clean. There just wasn't an instructor for that at his Utah school.

"I barely ever lifted weights before I came here," said Nefcy, who is also on the golf team. "I had no idea this was even available for high school students. It's a great opportunity for anyone that goes here."

Morse, a distance runner who has signed with Aquinas College, echoed that sentiment.

"Even when I went to visit colleges, like Aquinas that I'm going to, theirs is about the same as this," Morse said. "This is definitely awesome to have for a high school."