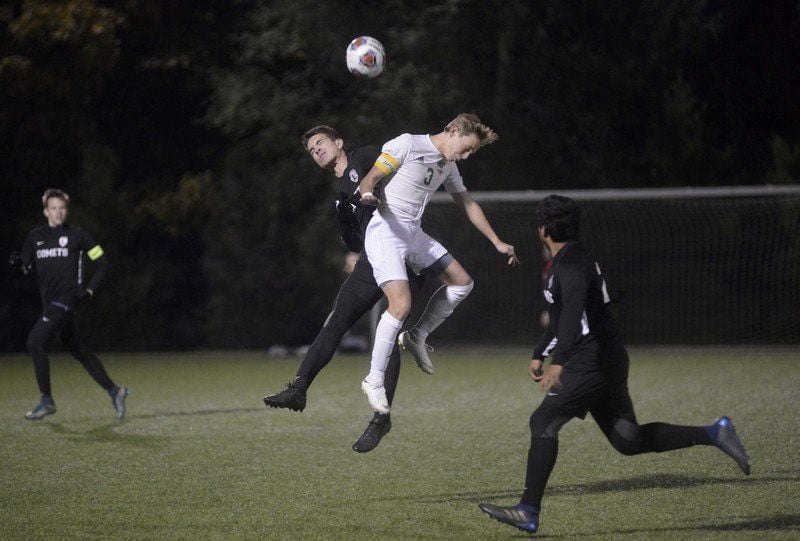 Leland’s Owen Kareck and Hackett Catholic Prep’s Brennan Creek jump for a header during the first half of their game in Holland Wednesday evening. (Photo by Katy Batdorff/Special to the Record-Eagle) 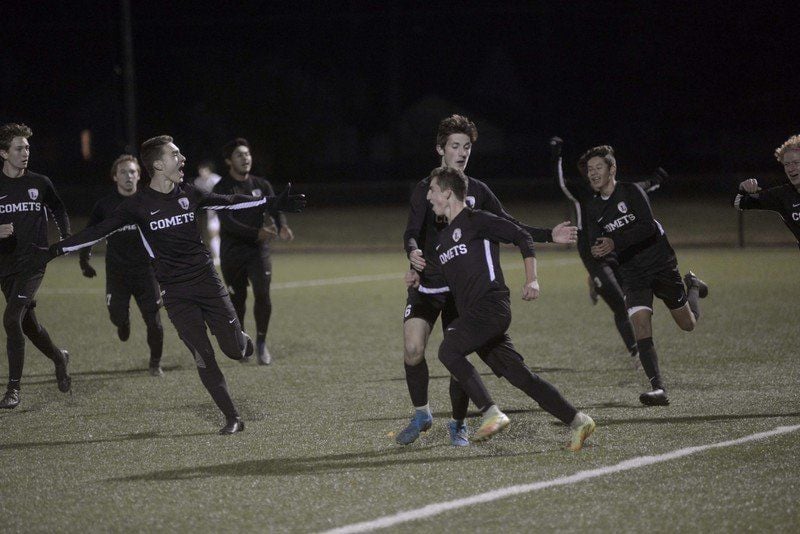 The Leland soccer team celebrates a goal during the first half of their game against Hackett Catholic Prep’s Brennan Creek in Holland Wednesday evening. (Photo by Katy Batdorff/Special to the Record-Eagle) 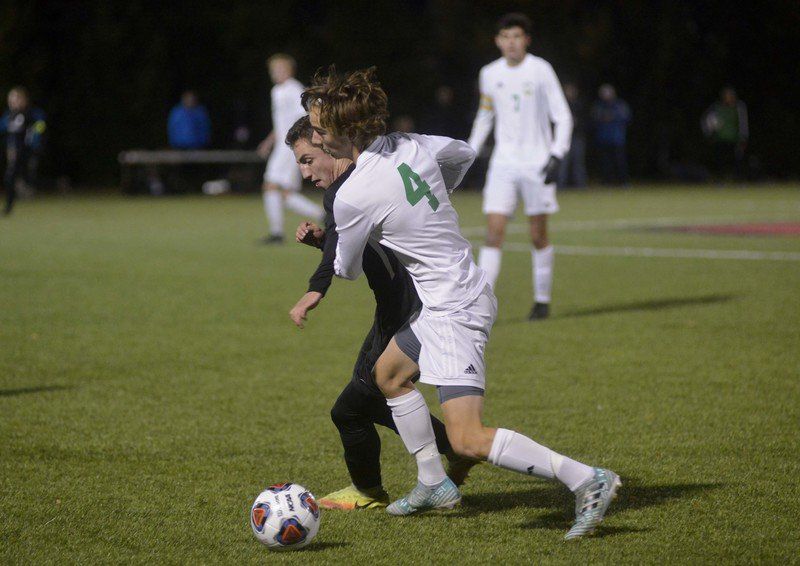 Leland’s Jack Munoz and Hackett Catholic Prep’s Brennan Creek compete for posession of the ball during the first half of their game in Holland Wednesday evening. (Photo by Katy Batdorff/Special to the Record-Eagle)

Leland’s Owen Kareck and Hackett Catholic Prep’s Brennan Creek jump for a header during the first half of their game in Holland Wednesday evening. (Photo by Katy Batdorff/Special to the Record-Eagle)

The Leland soccer team celebrates a goal during the first half of their game against Hackett Catholic Prep’s Brennan Creek in Holland Wednesday evening. (Photo by Katy Batdorff/Special to the Record-Eagle)

Leland’s Jack Munoz and Hackett Catholic Prep’s Brennan Creek compete for posession of the ball during the first half of their game in Holland Wednesday evening. (Photo by Katy Batdorff/Special to the Record-Eagle)

HOLLAND — The Leland Comets are now one step closer to their first boys soccer state title and there is no shortage of excitement.

Comet fans, parents, faculty and more than 40 students made the four-hour drive to bear witness to something that has never been done before.

"This is history in the making," Leland senior captain Cobe Lund said. "We just made history. But we are trying to make it all the way. That was always the goal and now we are one step closer."

No. 2-ranked Leland (23-1-3) is headed to the program's first state title game against defending Division 4 champion Ann Arbor Greenhills after defeating No. 3 Kalamazoo Hackett Catholic Central 3-2 in Holland on Wednesday.

The Comets haven't lost since the 2-0 season opener against Division 2 Cadillac and have not allowed more than two goals in any game this season.

The two-and-a-half-month streak has been building up to this point, but the Comets have done their best to ignore the obvious.

"We are on this roll and we haven't talked about it one bit," Leland head coach Joe Burda said. "I think that is intentionally from the coaches' standpoint and we haven't needed to. We had that in the back pocket for a halftime speech or whatever."

Burda hasn't had to break out the big guns to motivate his team yet because Leland has been consistent and plenty of motivation has been coming from elsewhere.

"I think maybe we got overlooked a little bit," Burda said. "We don't mind being an underdog. We will come in flying under the radar, no problem."

The Comets couldn't be overlooked in the semifinal game. Leland came out of the gate firing on all cylinders and put the pressure on the Irish immediately.

Senior striker Jack Munoz started the party only five minutes in. His cross from the side of the goal bounced off a defender and over the keeper's outstretched hands to give Leland an early 1-0 lead.

Jesus Calderon-Balcazar added Leland's second goal in the 25th minute on a beautiful assist from Nick Saffell from the corner of the box.

Leland looked like they were prepared to run away in the first half, but the Irish picked up the physicality and intensity and put the Comets into a more conservative game.

Hackett returned fire with three minutes left in the first half on a goal by Aidan Gillig to cut the halftime lead to 2-1.

Max Keenan would score the equalizer four minutes into the second half. Then Leland regrouped and went back to their aggressive form.

"We knew that we had to bring max effort," Burda said. "What I noticed from them is that they were reacting to us, which was our intention. We thought they would have more connections with (Brennan) Creek but they reverted to the kick-and-run and that was because we made them do it."

The Comets reverted back to what has made them successful all season in the second half — relentlessly attacking and keeping the ball on the ground.

Calderon-Balcazar was the beneficiary of the possession play by the Comets. He scored the game-winning goal on a header from Lund in the 54th minute to put Leland in the state finals.

The Irish didn't give up easily. Play got chippy and the Irish received three yellow cards in the second half but the Comets were not phased.

"They had so much heart and kept their composure as the cards were flying pretty readily from the refs out there tonight," Burda said. "We took some hits and we got right back up. We didn't retaliate at anything."

Leland's Owen Kareck got a yellow card in the first half, but the Comets kept their heads in the second half.

"We kept playing our game," Burda said. "Our speed and possession on this surface was great and we turned them into a kick-and-run team, which kind of surprised me because they have a couple of studs."

Leland's back line and goalkeeper Gavin Miller were pelted with shots in the final 10 minutes, but held steady in the face of adversity thanks to the crowd, according to Miller. He finished with seven saves.

"The crowd helped so much and we didn't want to send them home losing," Miller said. "It means so much to us because we have worked so hard since boot camp. We have been working and looking forward to states. We have been pushing and now we are here."

The Comets were escorted out of Leland by fire trucks and a caravan of fans that were headed to Holland, and Lund said it made them feel like they were playing at home.

"It feels great making history with this team," Calderon-Balcazar said. "We have great coaches, great teammates and great fans and a great program."

The Comets will play Greenhills (10-9-2) at Comstock Park at noon Saturday.