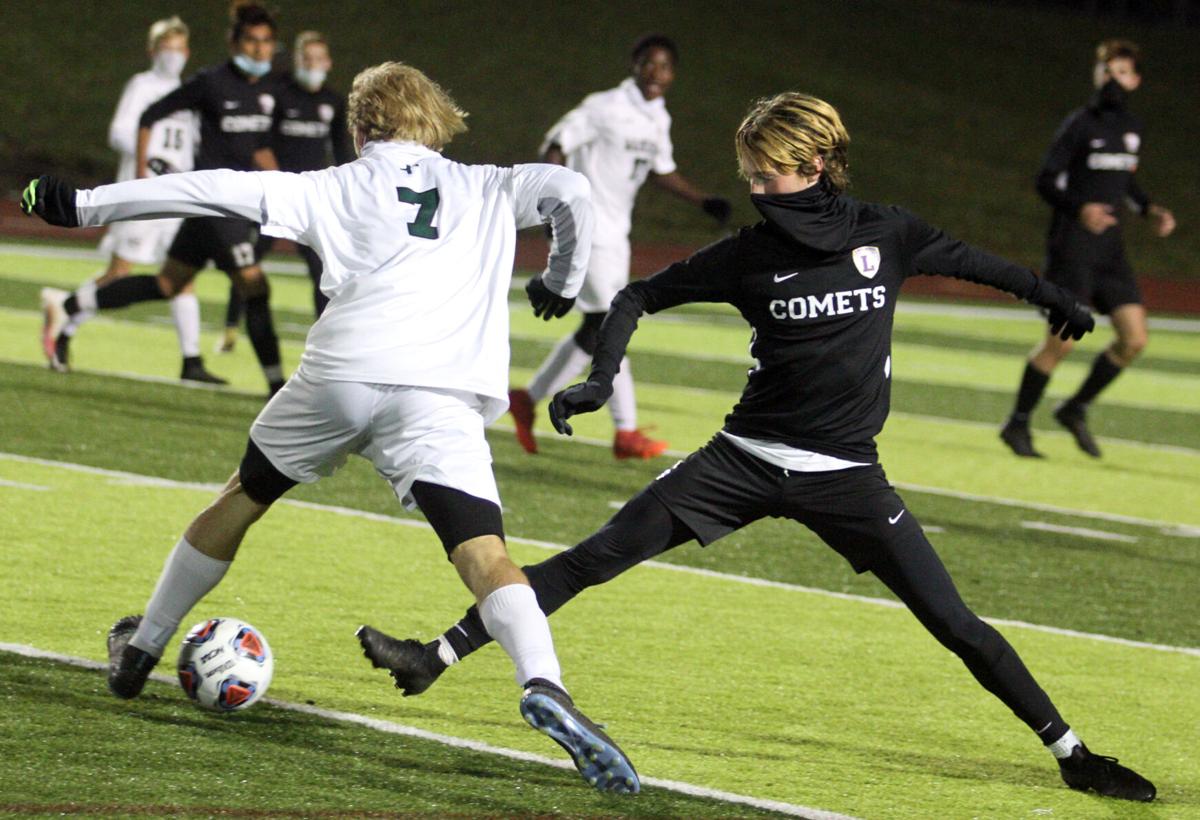 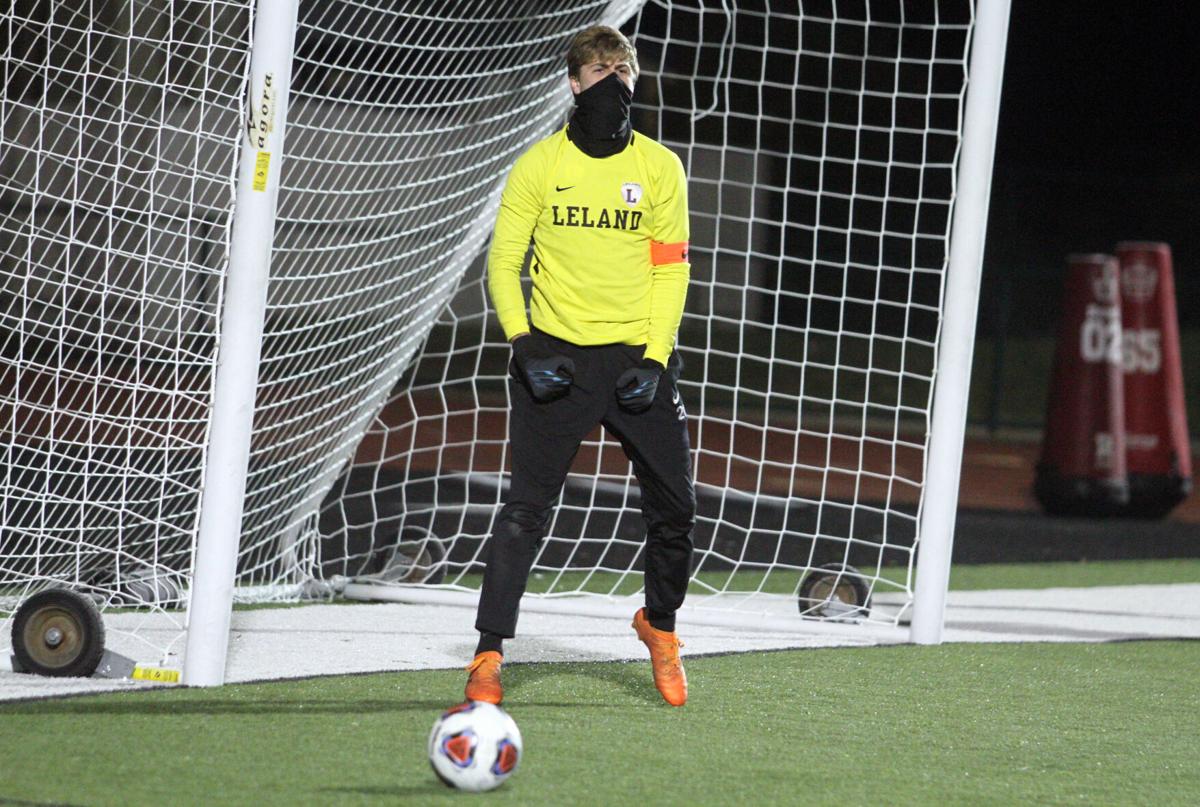 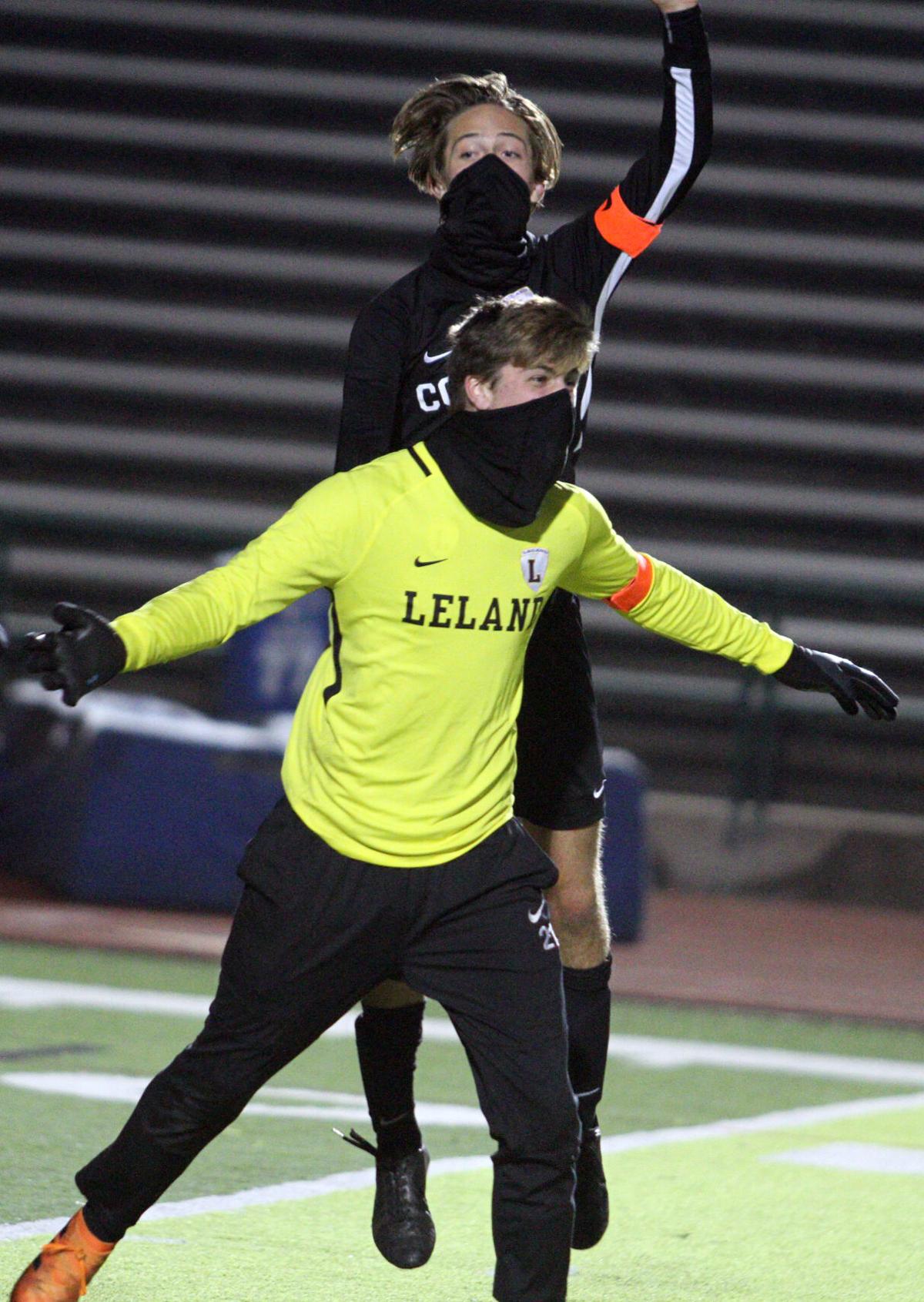 MOUNT PLEASANT — Ryan Howard’s shot barely crossed the line before Gavin Miller made a beeline for him.

“I went kind of upper middle,” Howard said. “That was not exactly where I wanted to go, but it worked.”

The Comets defeated the Warriors 2-1 — taking the shootout 4-3, the same count as in 2018 when Leland beat WMC en route to the Division 4 state title.

Warm fried chicken awaited the Leland soccer team on the bus after a thrilling regional semifinal shootout win that didn’t end until almost exactly 10 p.m. in 33-degree cold. Athletic director Ryan Knudsen told the team they could take off first hour Wednesday because of how long the game lasted.

Leland head coach Brandon Wheeler watched the last 19:19 and the shootout from behind pine trees outside Mt. Pleasant’s Community Memorial Stadium after a red card ejection early in the first overtime for arguing with the head referee.

“I was running up and down this fence looking through any nook and cranny I could to see what was going on,” Wheeler said.

One of my favorite photos from last night. Looks like the WMC player is a ghost trying to scare @Leland_Soccer Gavin Miller. pic.twitter.com/sNJPpoj4Bj

What he saw was his team heading to the 6:30 p.m. regional final Thursday, back in Mount Pleasant. Wheeler said he’ll watch the game’s NFHS stream, because he’ll have to sit out the next contest because of the red card.

“They’re a rival game every time,” Miller said of WMC. “And we beat them in PKs in 2018, so it just feels good. We battled to the end. Both teams did really well.”

The Comets beat WMC 3-0 Oct. 2 after 1-0 setback against the Warriors late last season.

“We had them down in our place a few weeks ago, and they beat us pretty good,” WMC head coach Ben Buursma said. “So I was really pleased with the improvement that we showed in this game, going head to head with one of the best teams in the state.”

Sophomore Joey Eastway put WMC up 1-0 in the 24th minute, but less than a minute later Jayden Holston was tackled while trying to shoot inside the box and referees awarded him a penalty kick.

Warriors goalie Jared Olsen dove to block Wyatt Sirrine’s original PK shot with 16:10 on the clock before Sirrine gathered in the rebound and took his time on a second shot with Olsen on the ground.

The game started turning toward the end of the first half and into the second, with Leland repelling WMC’s initial onslaught centered around skilled midfielder Lulo Mafahla.

Howard and Miller both said they thought the Comets wore the Warriors down.

“The first game we beat them 3-0, so they probably wanted a piece of us, which made them get a little tired in the first half,” Howard said. “Then we just came out with all of our fitness that we do throughout the year. I think that helped us out a lot. We were just ready to play the second half and all overtime.”

“We probably got a little bit tired there in the end,” Buursma said. “They started connecting a few more of their passes and getting a little more dangerous, too.”

Miller stopped WMC’s first shootout opportunity, diving right to deflect Gavin Risken’s shot. The next three Warriors shots — by Ashton Leffring, Ethan Hill and Brandon Eenigenburg — all scored to the opposite side. Eastway, who scored Muskegon’s only regulation goal, had his shot deflected and hit the crossbar to set up Howard’s heroics.

Holston, Sirrine, and JJ Popp each made their PK opportunities. WMC’s Olsen made a diving save on Miller’s try, a rare goalkeeper-goalkeeper PK matchup.

“We’ve been really passionate about how we play defense as a group and this year that’s been our thing,” Wheeler said. “But the other thing we’ve always done well is we make sure that we’re going to try to work harder than everybody. They were subbing all game. We played 11 field players and one goalkeeper the whole game. Those guys, they played 100 minutes, plus still had legs to hit penalties and win.”

WMC (11-6-1) won the Lakes 8 Activities Conference title, despite being the second-smallest L8 school by enrollment.

Leland dropped a 2-1 regional semifinal to Grandville Calvin Christian last year to come up one contest short of a rematch against WMC in the regionals finals, and the Warriors went on to win the Division 4 state title with a 1-0 win over Grosse Pointe Liggett.

Leland has 13 shutouts this season and surrendered only 12 goals in 19 games, and five scores in the previous 17. Seven goals came in the first two contests of the season when the Comets played up against larger schools Cadillac and TC Central.

The Comets beat WMC 1-0 in a shootout in the 2018 regional title game en route to the state championship.

“When you beat a team like that 3-0, there’s no way around feeling confident coming into this game,” Wheeler said. “Trying to convince the boys that they’re going to see a different animal, when you’re backed into a corner and you’re fighting for your life. And WMC, hats off to Ben, getting his boys ready. They are so good. Seriously, that that was such a good game, and they got an early one on us, but no quit in our boys.”