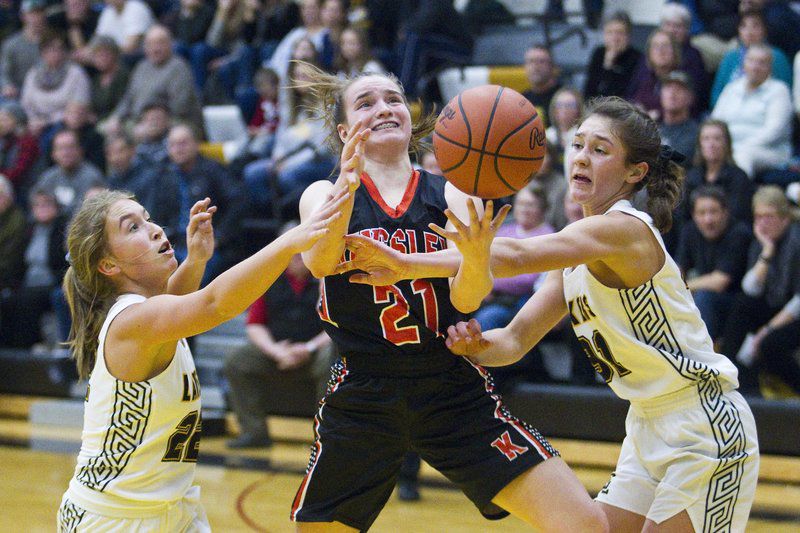 Record-Eagle/Jan-Michael StumpKingsley's Brittany Bowman (21) gets fouled while driving between Glen Lake's Karrigan LaCross (22) and Grace Bradford (21) in the third quarter of Thursday's game. 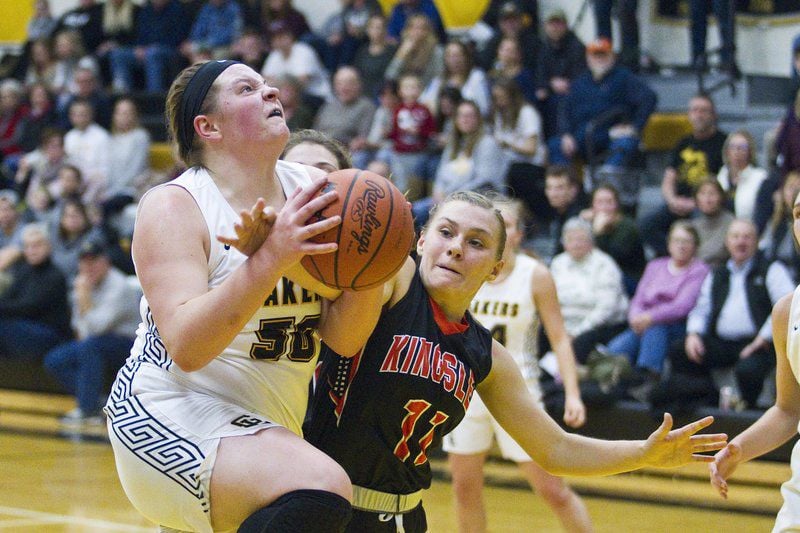 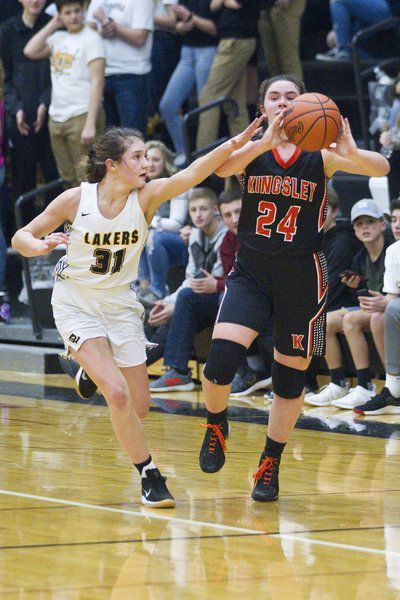 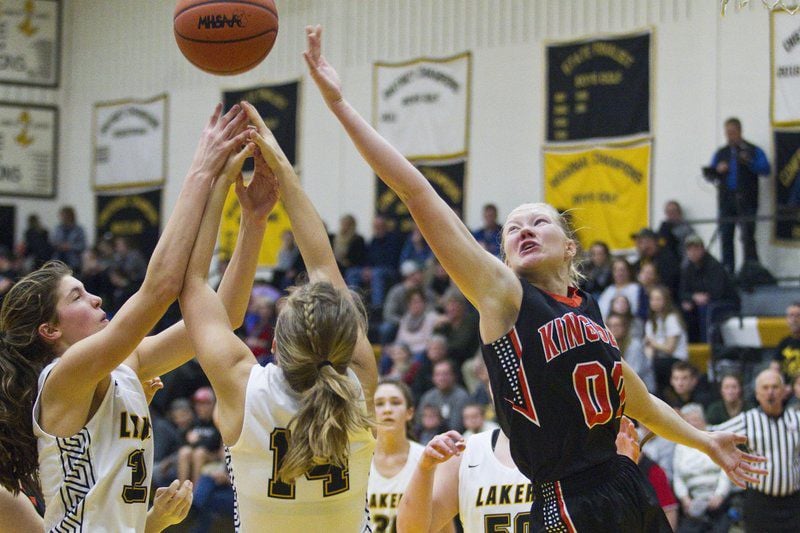 Record-Eagle/Jan-Michael StumpGlen Lake's Grace Bradford (21) and Lily Ewing (21) fight for a rebound with Kingsley's Jane Dunlap (00) in the third quarter of Thursday's game.

Record-Eagle/Jan-Michael StumpKingsley's Brittany Bowman (21) gets fouled while driving between Glen Lake's Karrigan LaCross (22) and Grace Bradford (21) in the third quarter of Thursday's game.

Record-Eagle/Jan-Michael StumpGlen Lake's Grace Bradford (21) and Lily Ewing (21) fight for a rebound with Kingsley's Jane Dunlap (00) in the third quarter of Thursday's game.

MAPLE CITY — The hype train never quite left the station once Glen Lake and Kingsley tipped off Thursday night.

The top two teams in the Northwest conference — both undefeated in league play entering the game— struggled to find an offensive groove. Lacking its usually prolific offense, Kingsley mustered a gritty 47-39 road win over the Lakers that Stags head coach Matt Schelich described as “ugly.”

“This one was a struggle offensively,” he said. “We struggled with our poise and stuff at times, but that’s how you get better. You have to play in these games.”

The defensive stunts forced enough mistakes for the Stags to build a small cushion in the second half.

“It was the difference in the game,” Schelich said. “We got just enough out of it to get a few easy looks. I thought it wore them down as well.”

Kingsley (9-1, 6-0 NWC) trailed by 15-7 early in the second quarter, but behind its pressure and atrocious free-throw shooting by Glen Lake, the Stags went on a 15-2 run to end the period and take a 22-17 lead to halftime.

Glen Lake (8-2, 5-1 NWC) was 0 for 10 from the charity stripe on attempts by six different shooters in the first half. Couple the lost opportunities with the turnovers, and Glen Lake’s offense completely stalled.

“We work on it in practice, but just no overhead passing,” Glen Lake head coach Jason Bradford said. “That’s what got us. They jump on us, we pick up the dribble and try to squeeze through the double team. We have to be better than that.

“To miss those free throws and have those turnovers in an eight-point ball game — it’s what we learn from it.”

Kingsley’s 15-2 run to end the first half stretched into the second half. Glen Lake’s Hailey Helling missed a layup that would have cut Kingsley’s lead to three points, but instead, the Stags took the miss and converted it into a Marie Pierson 3-pointer to take an eight-point lead.

Glen Lake never came closer than six points the rest of the game, despite much improved free-throw shooting after halftime (13 of 16).

“Every time you’d seem like you get ahead, then they chip back at it,” Bradford said. “That’s when you need to step up and make those defensive stands.”

Kingsley’s victory came three nights after defeating another one of the top teams in northern Michigan. The Stags topped Manton 66-44 on Monday. Thursday’s win over Glen Lake came far less easily, but it became a highlight of Schelich’s birthday.

“It was just enough big shots,” Schelich said. “The other night, it was like shooting into the ocean. We couldn’t miss. In a game like this, somebody up two or three buckets seem huge.

“Defensively we set the tone both games. The Manton game was an A-game offensively.”

Bradford said Glen Lake is still searching for a floor general, despite its early-season success.

“We’re still looking for a leader on the floor,” Bradford said. “Once we get that, things will change. Somebody that can take control, calm the younger girls down and talk a little bit out there.”

The teams will have their second matchup of the season on Feb. 22 in Kingsley.

“When we go to their place, it’s going to be a ballgame,” Bradford said.