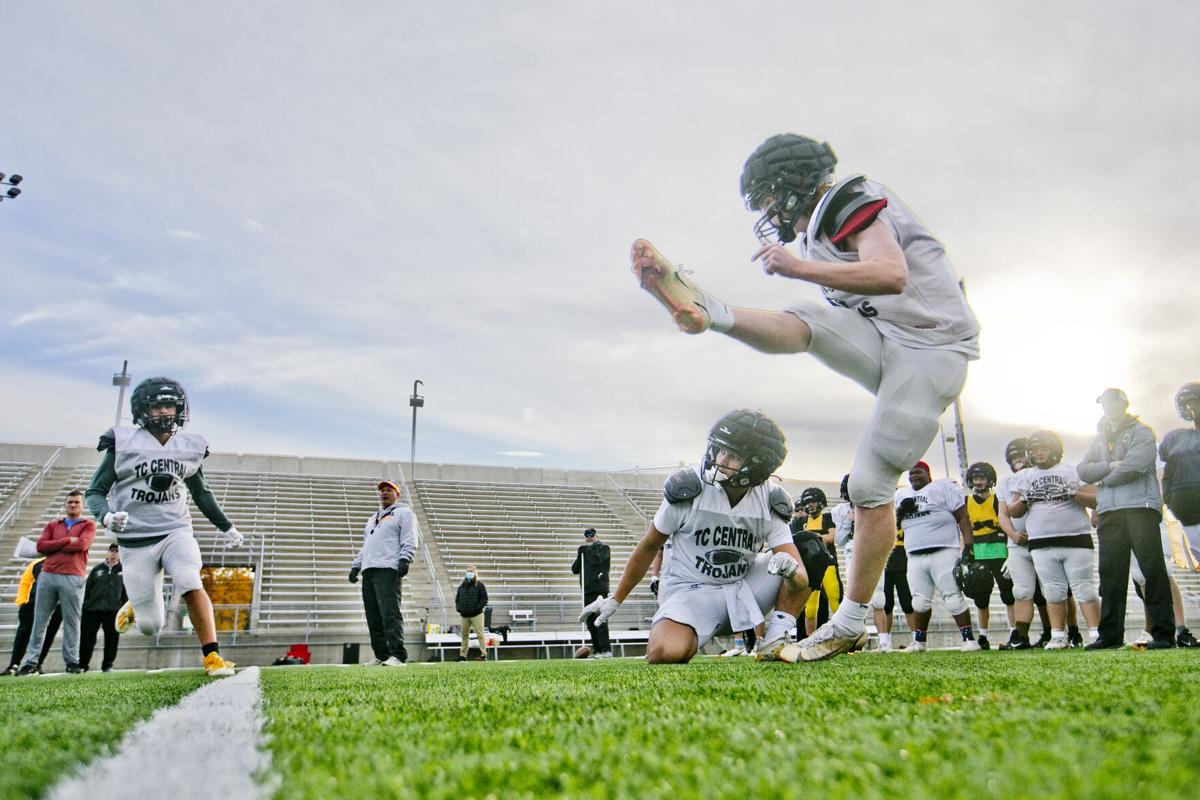 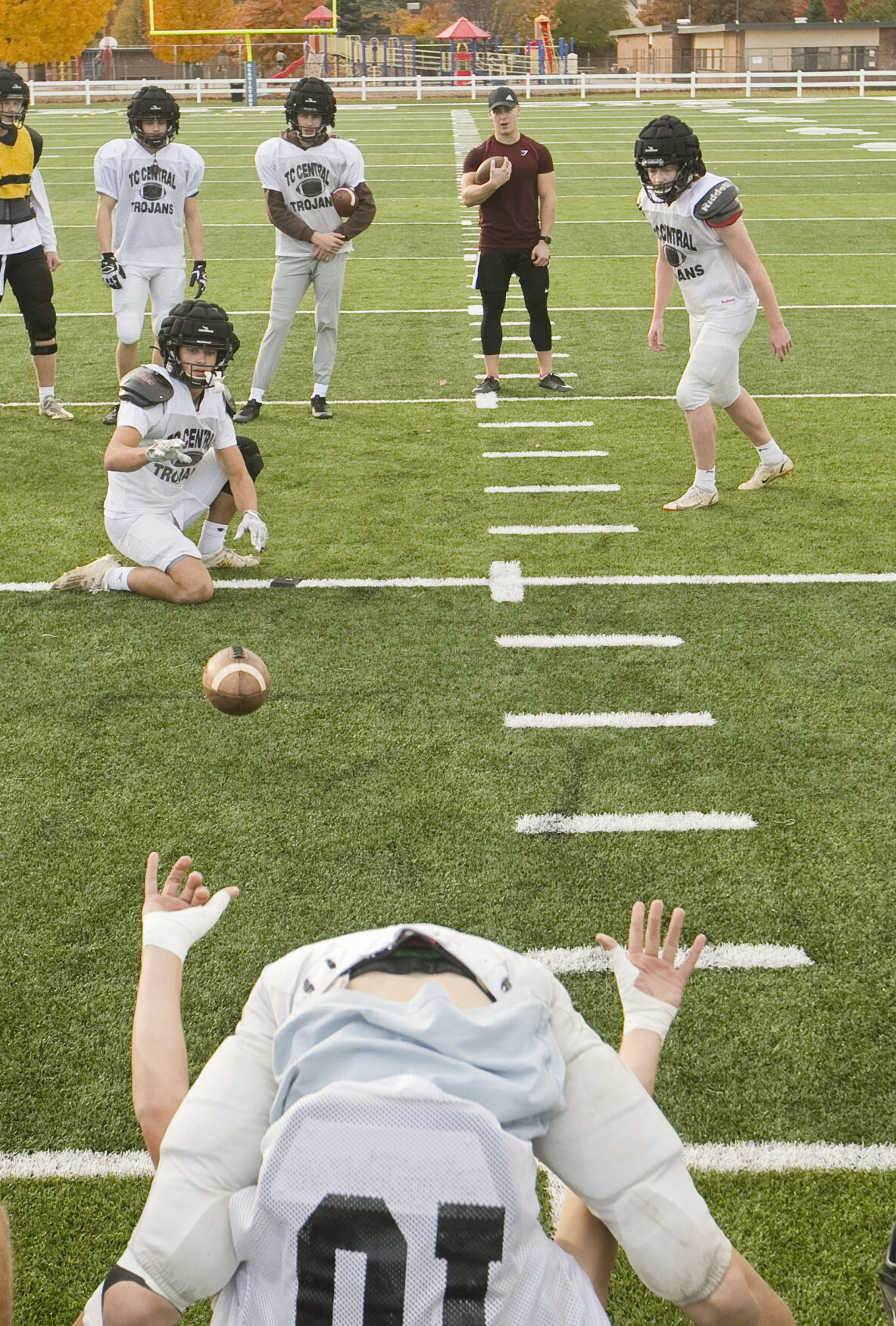 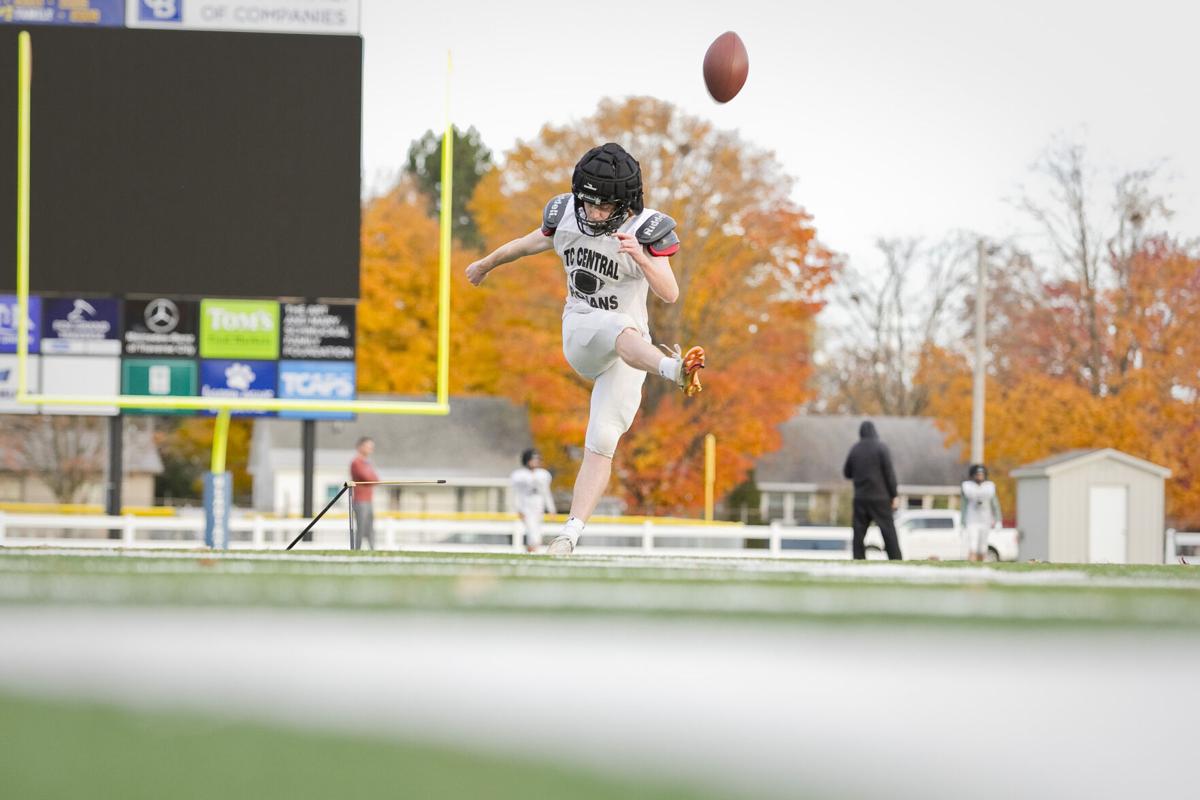 Traverse City Central’s Everest Noyes works on his kicks during practice on Tuesday at Thirlby Field. 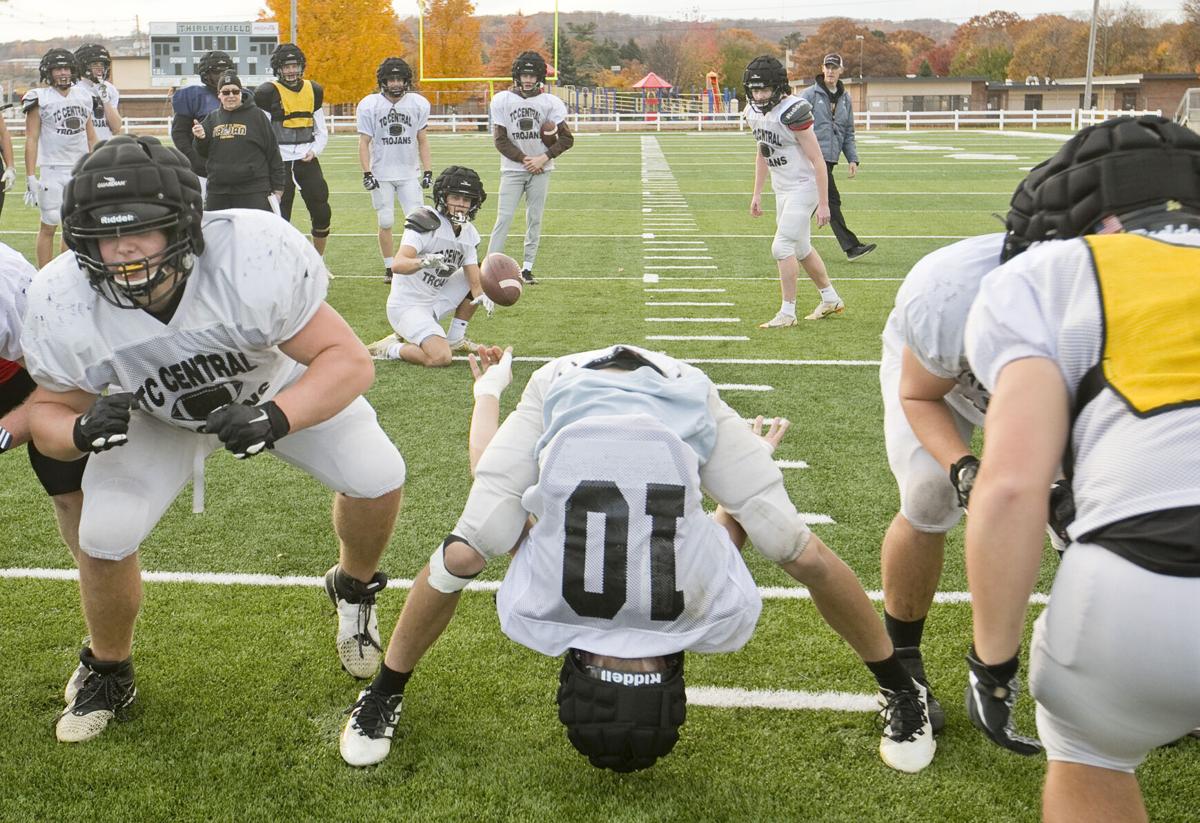 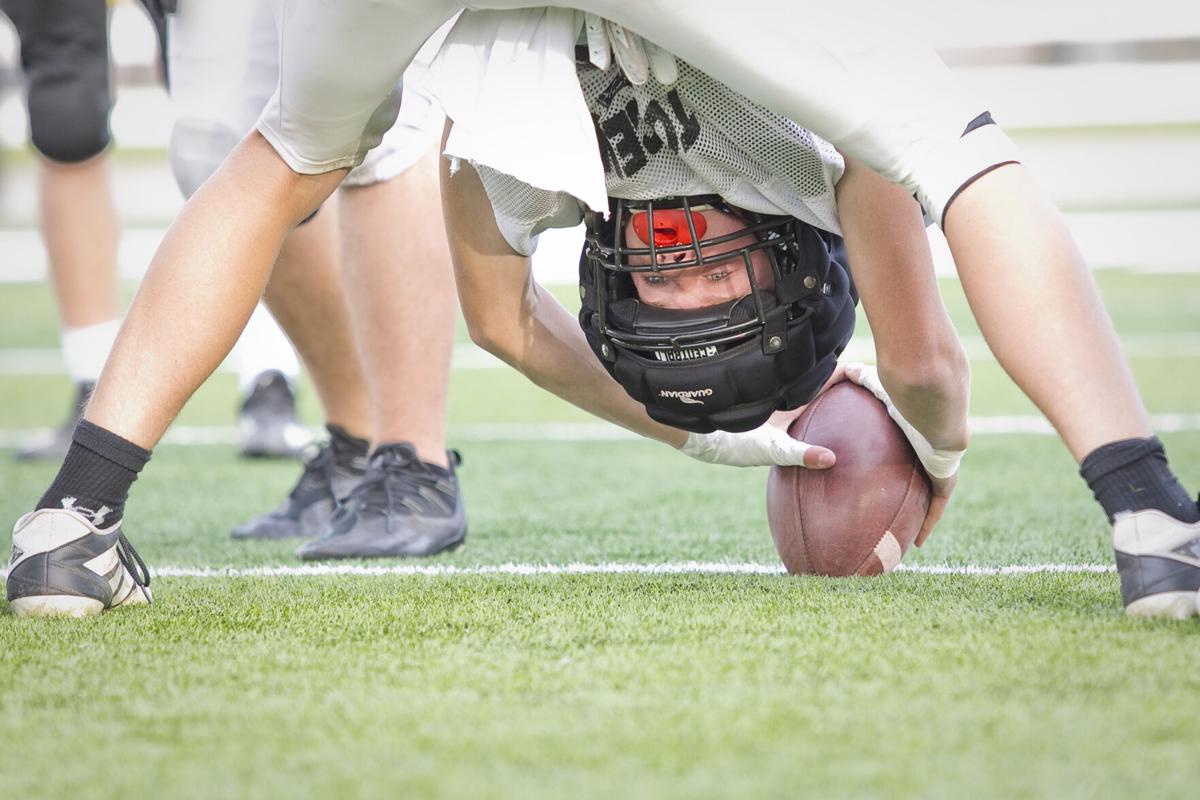 Traverse City Central's Anthony Barr (10) prepares to snap the ball for a kick during practice on Tuesday at Thirlby Field. 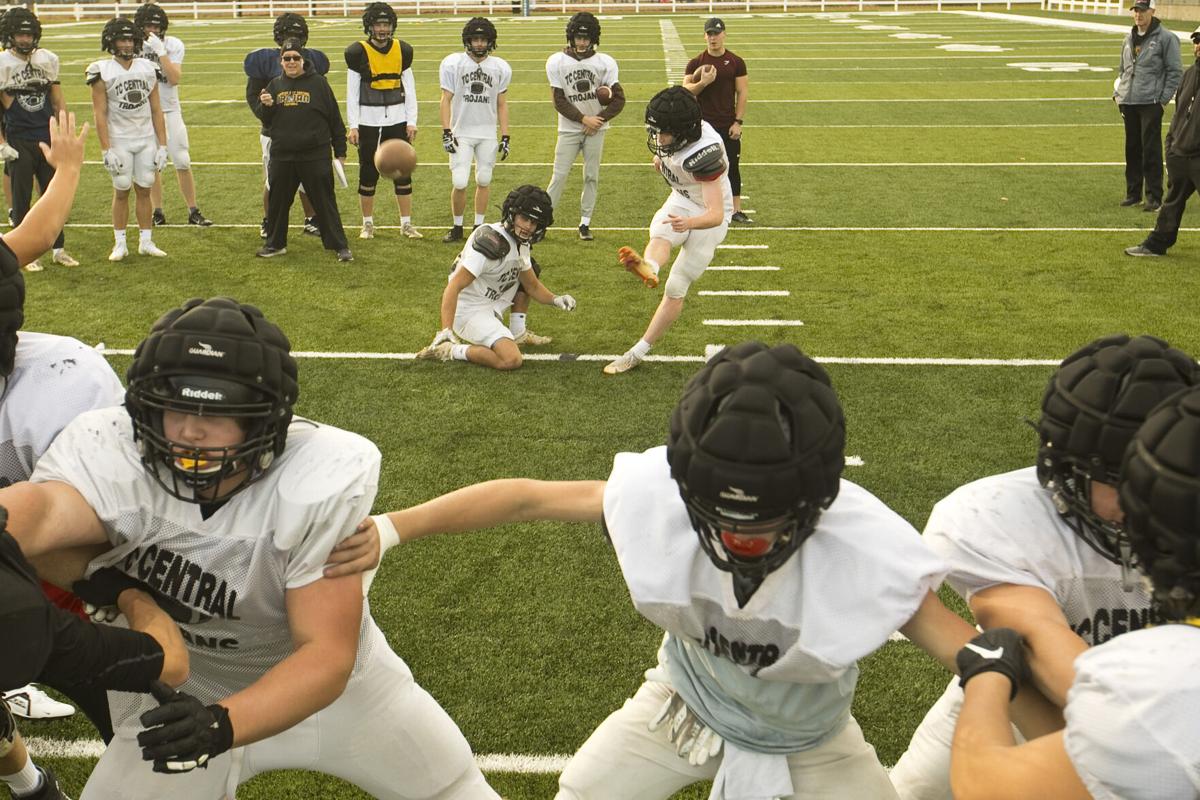 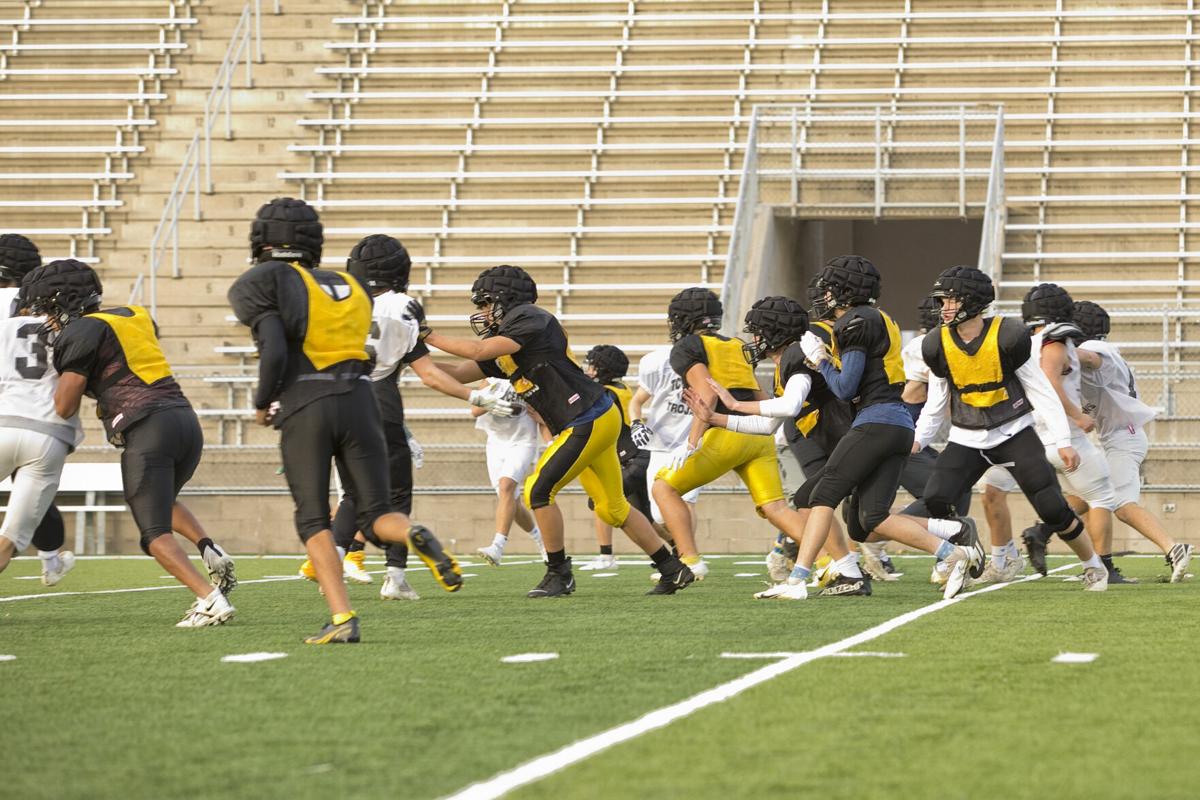 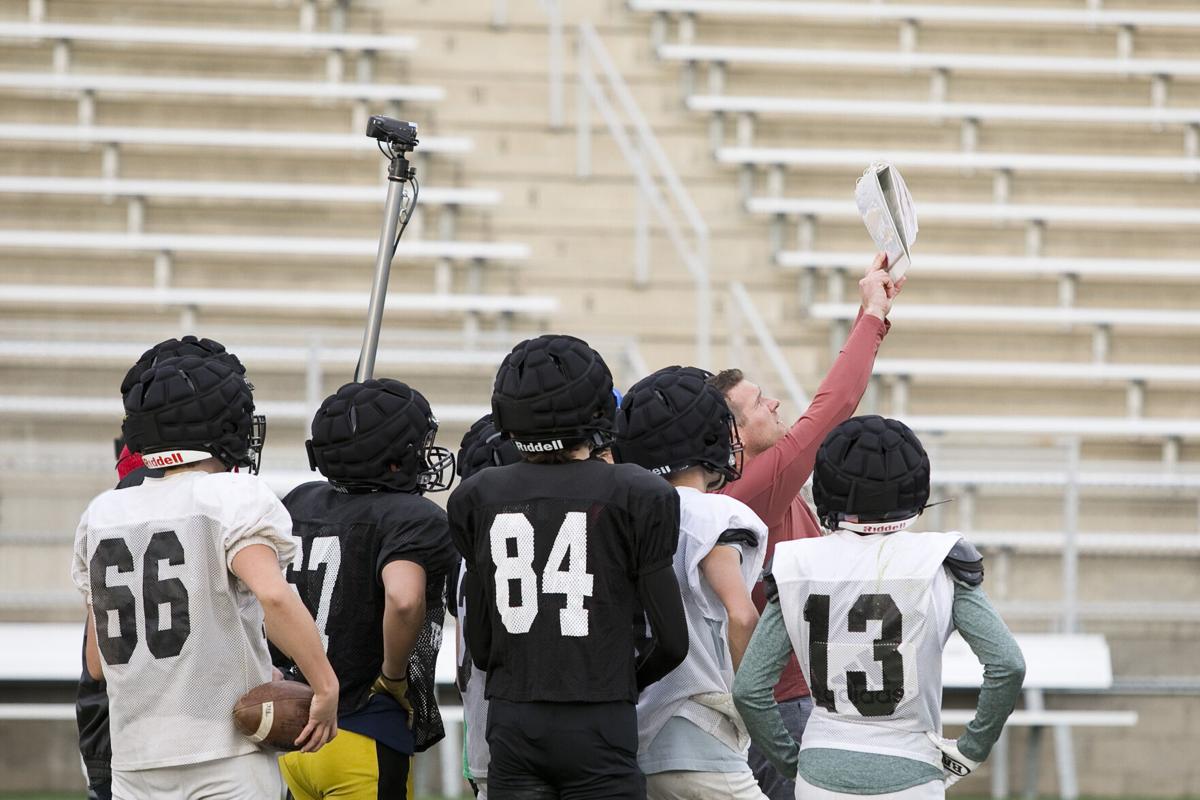 Traverse City Central’s Everest Noyes works on his kicks during practice on Tuesday at Thirlby Field.

Traverse City Central's Anthony Barr (10) prepares to snap the ball for a kick during practice on Tuesday at Thirlby Field.

Fast-forward to his senior year and Noyes leads Central’s PAT team with holder Carson Bourdo and long snapper Anthony Barr into a game where every point will mean that much more. No. 3 Traverse City Central (10-1) takes on No. 4 Caledonia (10-1) in a Division 2 regional Friday at Grandville.

“It’s definitely added a calming aspect to the team,” Noyes said. “I think they have a lot of confidence in the three of us, and we appreciate the opportunity to go out and put points on the board.”

The Trojans 537 points in 11 games are a program record at 48.8 per game, eclipsing last seasons’ 46.09 average in as many contests. Sixty-seven of those points are from PATs, and three are from a field goal against Marquette.

“When you score, it’s usually seven points,” Bourdo said. “I think our kicking percentage is definitely better than our two-point percentage. It’s nice to be able to know you’ve got an extra point almost guaranteed with these two guys.”

Noyes recalled the day’s crazy chain of events that led to his lone field goal of the season. Over the course of about two hours, Noyes scored a goal in the Trojans soccer game at the Trojan Athletic Complex, drove to Thirlby Field, changed into football pads in his car, then ran out onto the field to sink a 35-yard ‘goal’ through the uprights — all before the end of the first half.

The other double-duty day came when he played a soccer game in Saginaw and drove to Michigan Stadium in Ann Arbor to kick extra points during the Trojans’ game against DeWitt. Those games were separated by a few hours, so it wasn’t as big of a rush.

Noyes broke the Big North Conference single-season record for extra points with 25 at the time of Central’s game against Cadillac. He didn’t play in the BNC finale at Alpena because of a soccer game in Traverse City against Midland Dow.

“I don’t think any one of us is replaceable,” Barr said. “Carson gets the ball down really well if I got a bad snap. Everest has good timing when it comes to the snap and hold. ... Really. we just work together. That’s all I can really say.”

He’s not the only soccer player to suit up on the gridiron in the greater Traverse City area. Glen Lake senior Henry Plumstead joined Glen Lake mid-season and made a 43-yarder through the uprights during the Lakers game against Kalkaska. He attempted one from beyond 55 yards that was just wide left.

Noyes played football before this fall, but it was his first season back in years. He moved from Pensacola, Florida, to Traverse City between middle school and high school.

Working with Hall of Fame special teams coach Jack Schugars — who led Muskegon Oakridge for 42 years before joining the staff at Ferris State and coaches with his son, Eric, at TC Central — clearly helped.

“We’ve always tried to have that relationship with soccer players like ‘You guys can kick too,’” Central head coach Eric Schugars said. “He’s just a great, high-character individual and the type of player you want on your team.”

The road to regionals wasn’t an easy one for the Flying Scots.

Caledonia beat Hudsonville 26-19 in the final week of the season after clinging onto a one-point lead early in the fourth quarter. The Scots trailed 14-0 to Byron Center before scoring 28 unanswered points to win 28-14. Last Friday, for the district title, Caledonia beat Muskegon Mona Shores 49-12, the team that ended its season in 2020.

“It’s one of those where we have to prevent the big play,” Schugars said. “They have big-play potential. (McKenzie) has shown that on film. He’s just a great player.”

Schugars said the second key to the game is keeping his offense doing what they’re known for — scoring points. The last five Trojan wins have ended with a running clock.

SERIES: The Trojans and Fighting Scots meet Friday for the first time.

BACKGROUND: The Trojans' 55-18 win against Bay City Western last week sent them the regionals for consecutive years for the first time since district tournament play began in 1998. The last back-to-back regional appearances for Central were in 1990 and 1991. The 2021 season is also only the sixth time in program history the Trojans have won multiple playoff games in the same postseason (1978, 1985, 1988, 2017, 2020). Caledonia beat Mona Shores 49-19 Friday to win just the fourth district title in program history and secure the Fighting Scots' first regional appearance since 2012. Caledonia's only loss this season is to undefeated Rockford (11-0), which is ranked No. 1 in Division 1 and has an average margin of victory of 25 points per game. The Scots lost to the Rams by just three points, 17-14.